How on earth are we going to get past that!

A late start this morning, lovely and quiet on this site so didn't wake until Toffee starting nudging the both of us about 7ish. 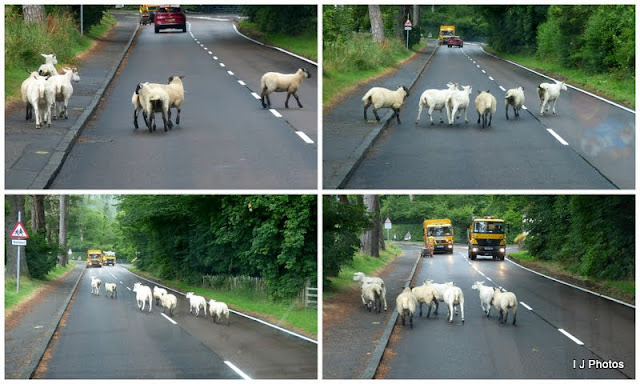 Nowhere really to walk her but we found a place at Lochan Lairig Chelie about 5 mile along the A85. In good weather I expect it would have been lovely but the cloud came down and with it the rain. Only managed roughly a mile before heading back. It was getting beyond a joke when water poured into the shoes from a steady stream cascading down the legs. 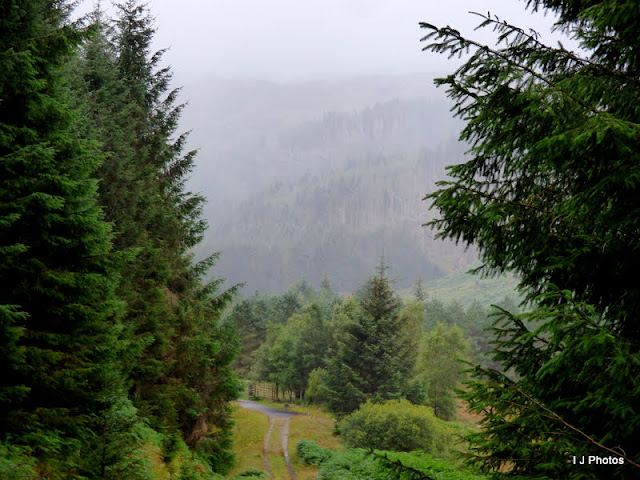 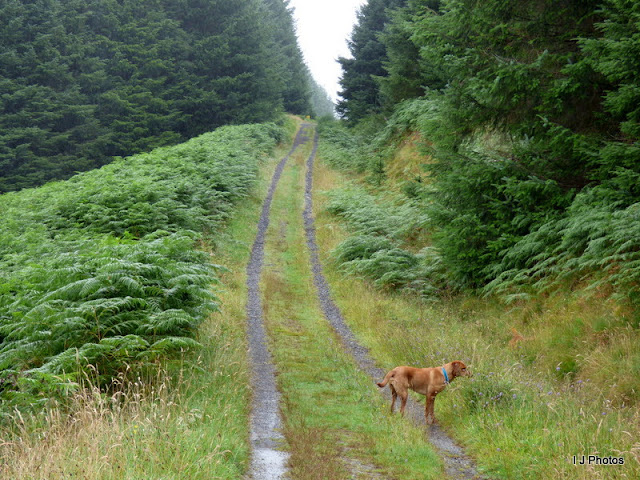 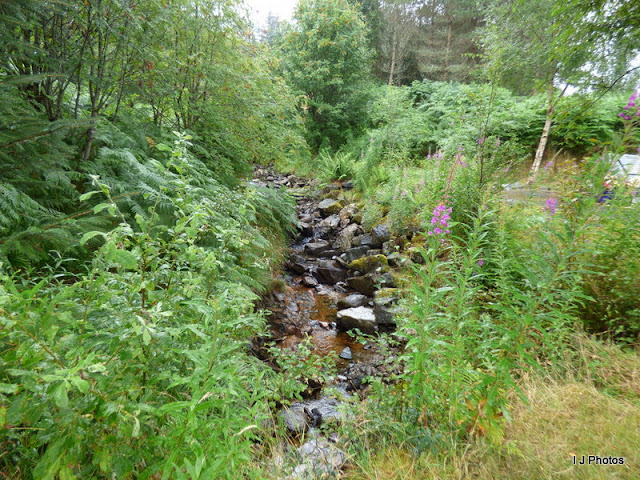 A glimpse of sun and with it came this rainbow. 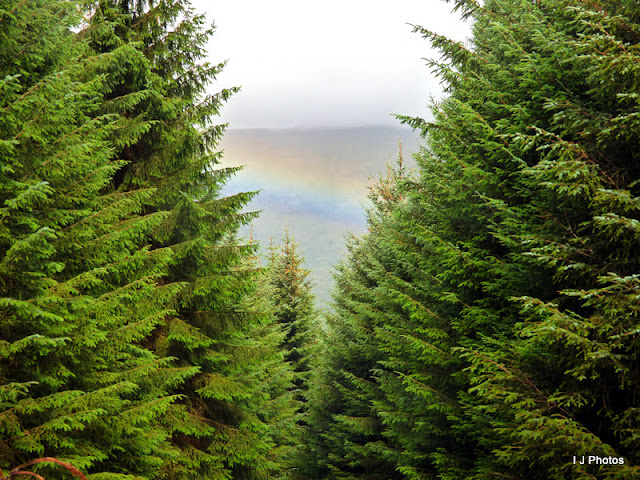 The drive to Glencoe was pretty dismal, no chance of seeing the majestic mountains rising from the valley. Cloud covered the peaks as we drove along on the A82 and the hope of seeing the amazing views were dashed. Then a bit of luck as not far into the highlands the sun put in an appearance. 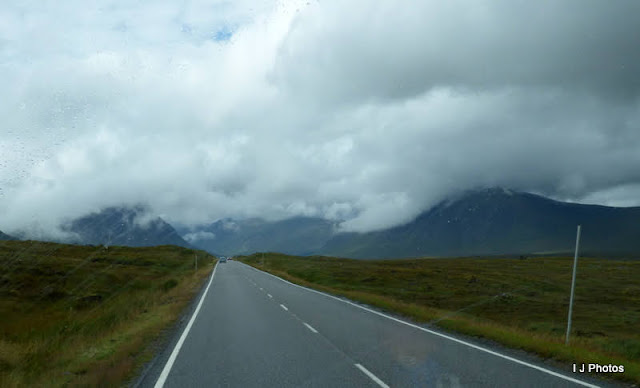 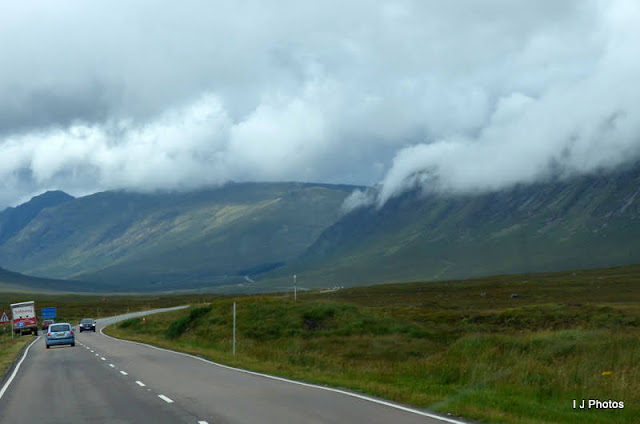 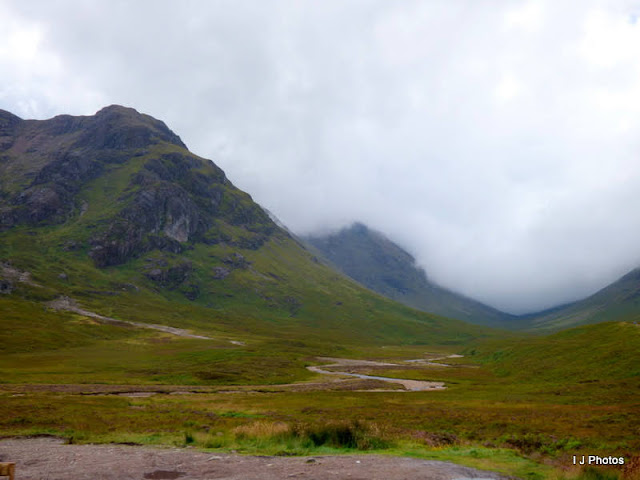 All the viewpoints were almost full. That time of year of course but it didn't make our life any easier trying to stop. This was one of the few that actually had a space. 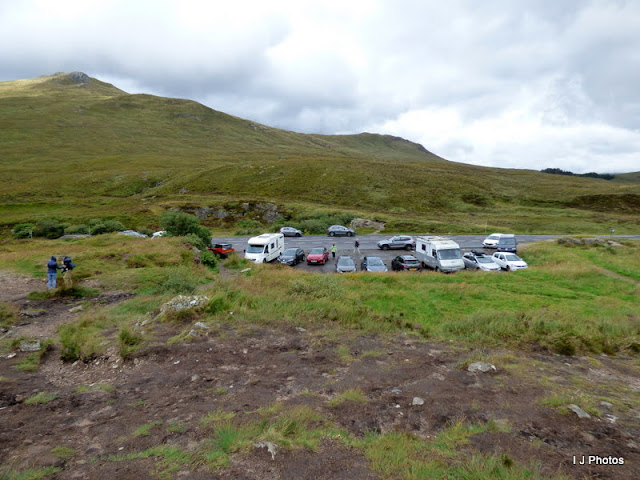 We started looking for a particular parking spot set back from the road. Back in 2019 we had it to ourselves and our plan was to find the same one to stay for the night. It had been awful weather then, rain high winds, a bit like today! Anyway could we find it? With the one main road through the heart of the Highlands, where was it?  Driving almost to the village of Glencoe, and it still wasn't found, so we turned back. And then there it was, much easier to see from this direction so indicted to turn in and what should we find? A blooming great locked gate blocking that perfect place. Blast...now where do we stop. So we kept going, another place was found with just the one space left. Pulled in, went to take Toffee for a walk and discovered just boggy ground, hardly ideal for us to walk on although Toffee didn't care one bit. She was loving jumping in the wet sodden ground. No way could we pick up after her so another move required.

On the point of leaving when this amazing rainbow appeared. The merest ray of sun through a wall of cloud to give this effect. 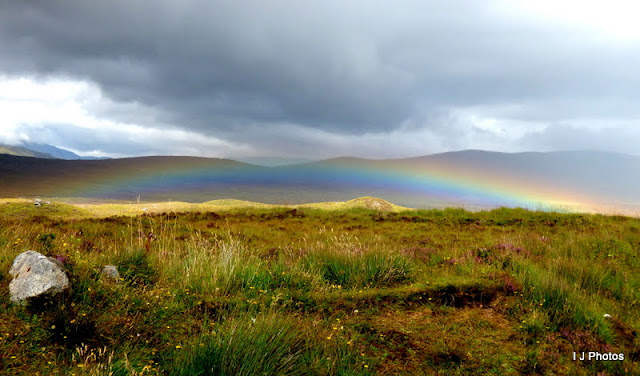 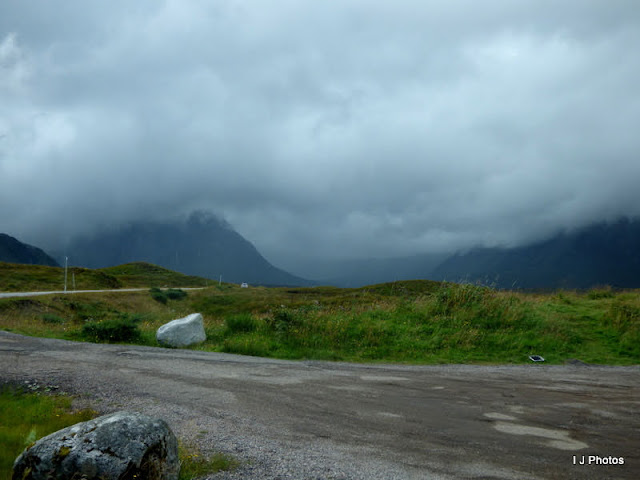 One more place to try and that was Glencoe Mountain resort. It had 24 hour parking, elsan and showers all for a fee of course! We turned up the single track road and came across a motorhome stopped in one of the passing places. Not certain why or if we could get past so Ian tooted the horn. A lady came out, German with poor English. The motorhome had been hired, they had gone over a bump and tripped the fail safe fuel cut off! No way of restarting the van and because the hazards automatically came on, that had flattened the battery. Crikey how long had they been there? Turns out for hours! The hire company were usuless, in fact left them to try and sort themselves out, told them to phone a garage over a 100 miles away, how bad was that! Anyway we did manage to squeeze past, wing mirror pulled in and wheels very nearly going over the edge...gulp...stopped at the car park, discovered no overnight parking...???....and realised this was yet another place where Toffee couldn't be walked because the area was nothing but tarmac. Anyway Ian had taken pity on the German family and looked on the web to see if he could somehow clear that fail safe fuel cut off. Turns out there is a rubber button in the glove box on the passenger side which needs to be pressed, a click will be heard and the switch is reset. Ian walked down to them, showed them where it was, did the honours and yes, it worked. It didn't really help their plight because the battery was flat and no one had any jump leads. To cut a long story short, another motorhomer had been up the the centre, explained what had happened and a tow was arranged to the top car park. Here an electric point would charge the batteries which meant they could resume the journey in the morning. 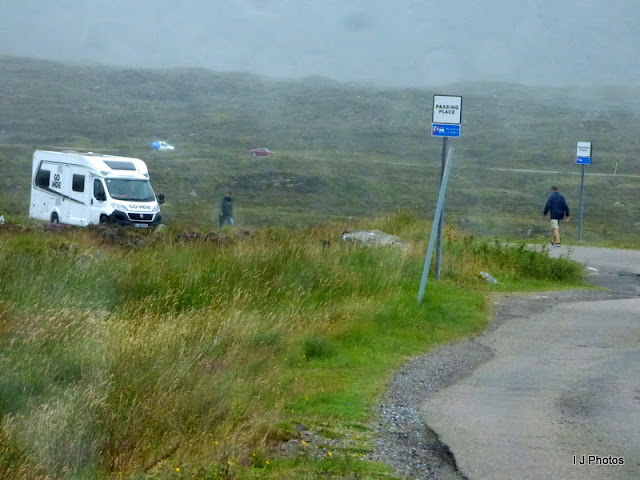 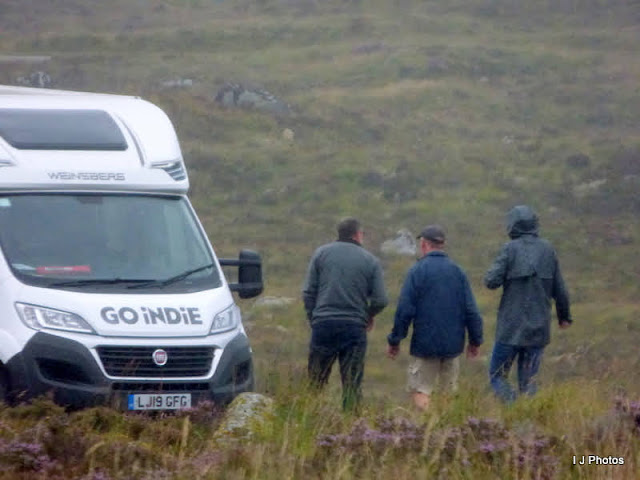 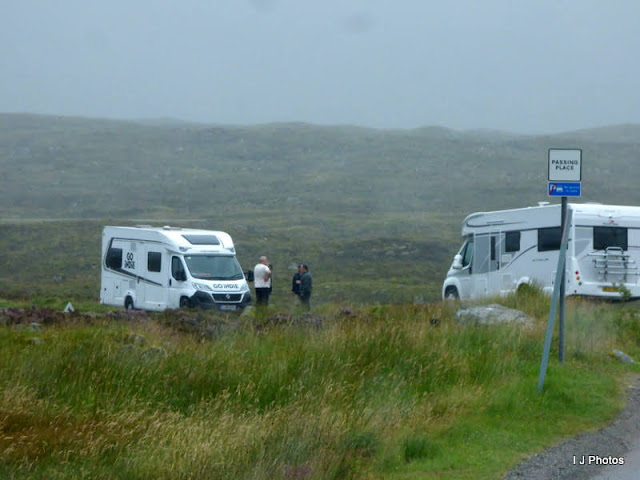 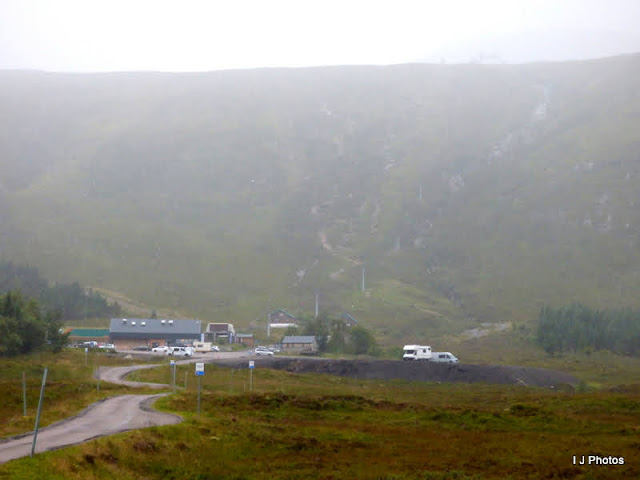 Finally, found a place to stop. It was now after 5 pm so most of the tourists had left. One viewing point had no cars at all, that would do nicely. Shame about the midges. I'm going to insist Ian takes Toffee out for her last walk tonight! 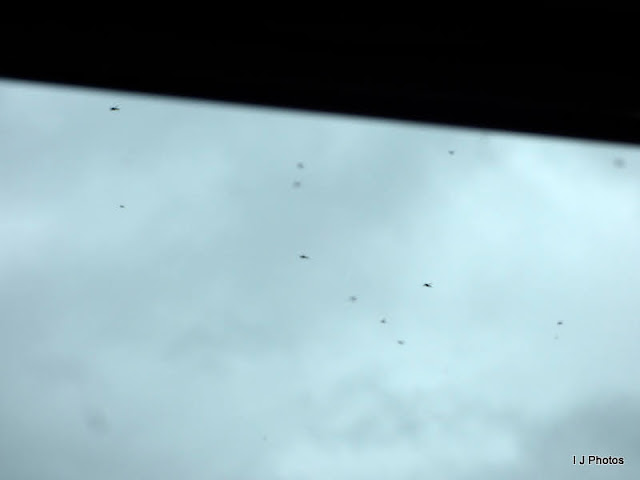 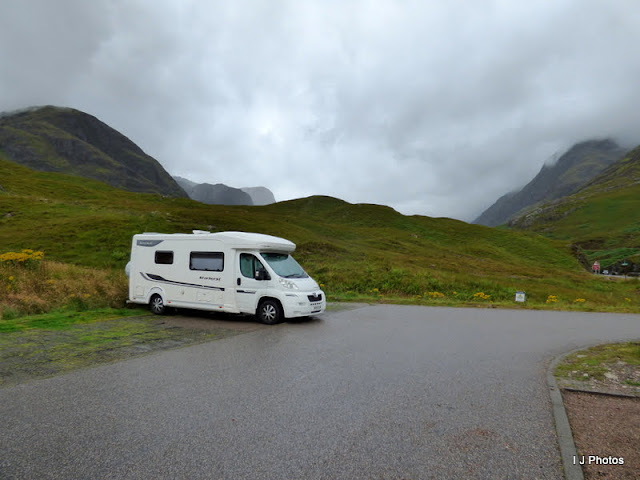 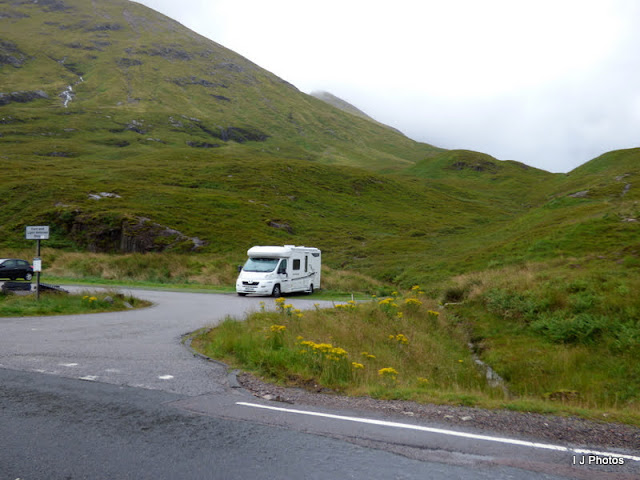 That's a very handy tip about resetting the fuel cut off, I've just been and looked at mine and it is just behind the left hand edge of the passenger side "Kicker Plate" - right next to the wheel arch. I think your "Van" is the same year as mine, so I trust Ian has had a look as well!

"The battery was flat and no one had any jump leads"

Which was probably just as well - Peugeot vehicles are notorious for suffering problems during jump starting, either if the battery has just run down (as in your post) or if it's failed completely. Doing it wrong can lead to expensive damage to various electronic modules. After reading numerous forum posts about this subject I've printed out and laminated the "Official" procedure and keep it in the glove box with the owners manual. I'll email you the text if you like.

Thanks Dave. Ian has already checked it out.