Storm Eunice, I think we got away lightly. Gusts of about 40mph, a mere breeze compared to what those down south had to suffer. We did batten down the hatches, especially making sure the top box lids had bungee cords to keep them in place. No doubt there will be plenty of trees down, just hope no boats will be under any of them when they fall! Watched the barometer hand dropping to Stormy this morning. Not seen that in ages. 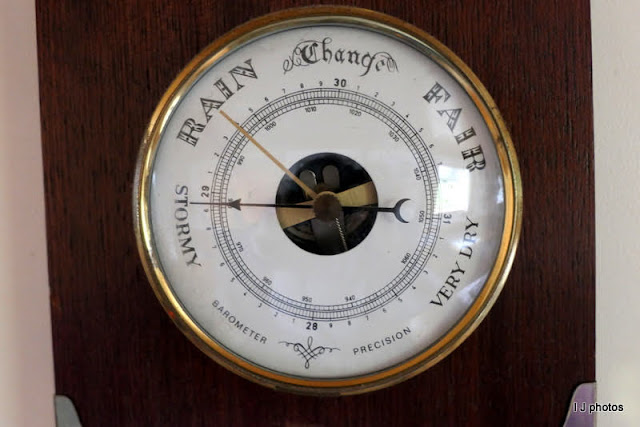 We have made a decision. The Eden project is on for mid-March, so now arrangements have to be made for MB to have its MOT. Gosh, I do hope it passes!!!! The van's bedding also has had to be collected. We left it down at our sons in Milton Keynes over the Christmas period 'cos we were due to kip in their caravan. As it turned out we had the use of their spare bedroom instead because Iwona's mum never made it to the UK from Poland. Something to do with not getting the passport back in time. Anyway if we had set off without the sleeping bags, a most unpleasant few nights would have been had.

We also made a short visit to Ian's sister down at St Lawrence near Maldon Essex. On route and on the M1 the worst possible words flashed up on the overhead gantry, 30-minute delay due to overturned lorry! Click HERE. Well we joined the back of the queue and crept slowly forward. Then it was all stop....for 2 blooming hours!!! Having just passed the services I was very glad neither of us needed a comfort break. Could have got very interesting! Anyway we eventually get to where the accident happened and it was almost as if nothing had occurred. The lorry had been cleared, road damage repaired and lanes swept clean. Brilliant job done by the recovery team although waiting for traffic to move wasn't pleasant at all. Thank goodness for sudoku on the phone to keep us occupied!

Arriving late we still had time for a walk along the Blackwater Estuary and along the rows of houseboats. Of course when the tide goes out they are left high and dry, but one had shifted and was now leaning alarmingly. According to Sheila it's been like that for ages. 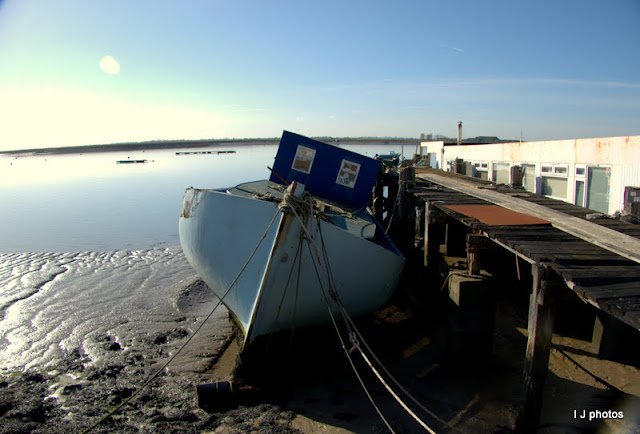 We only had the one night with them so it was a very quick visit. On the way home guess what? Yep another hold up on the Northbound M1 at the Milton Keynes junction. Thankfully the delay was only about 30 minutes. Passing the incident, it seemed strange that 4 cop cars were in attendance, one of which was the dog van. Two cars were involved (looked to be a shunt from behind) and just seemed a bit OTT for a small accident. Anyway we were very glad to finally get back to FS and get the diesel heater on. Yep, it has been returned fully working, although on startup we do still get some white smoke.

I can't see much happening from now on so until we leave on MB in March, farewell for now.

And seen on the Blackwater Estuary 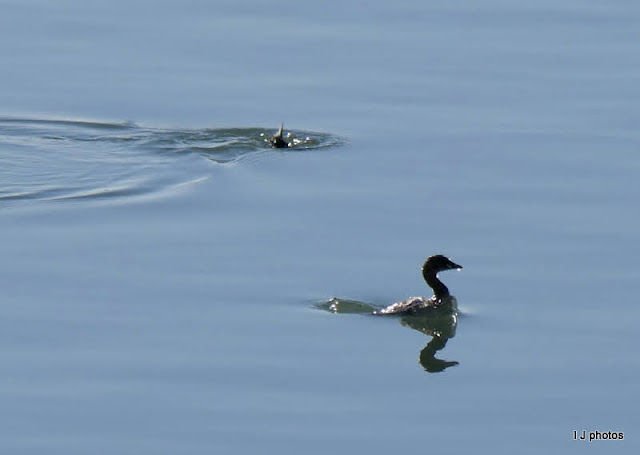 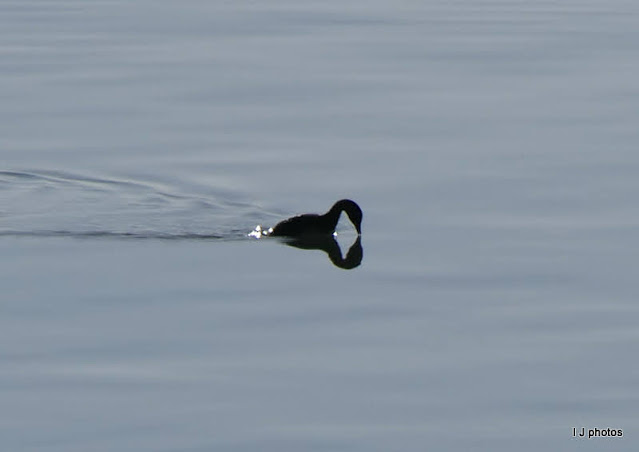 Posted by Ian and Irene Jameison at 4:37 pm No comments:

A few issues to address.

Muddling along as you do when one is stuck in the same place for long periods of time, finding bits and bobs to keep us occupied on a daily basis was quite a challenge. My hobby at the moment is doing painting by numbers. Really pleased how the tiger turned out, but lack of wall space meant it has had to be confined to the back of our wardrobe. My next project is to paint Meadow Menagerie, (birds and butterflies) 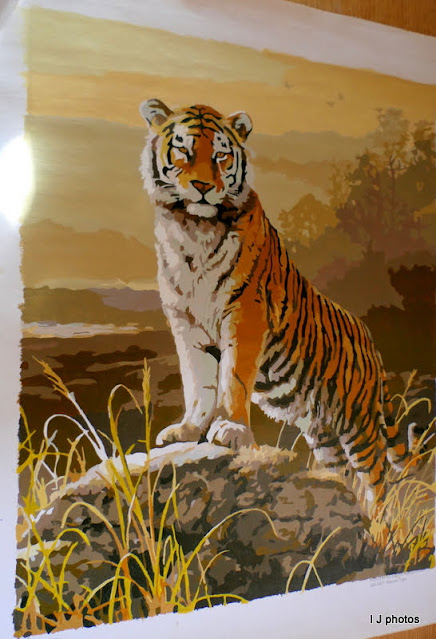 Ian doesn't have a hobby. No time for one because the old girl (no not me!) always throws up one problem after another. (hmmm, on the other hand Ian may well have meant me!) Anyway, first the washing machine. Oh it started okay and went through the program as if everything was as it should be, but no water went into the machine. Turned out the solenoid had packed up, so a new one was sent for. Two days later it arrived. I had stupidly thought it to fit through the letter box at the cottage, after all it was only a small thing, Talk about flabbergasted when it was delivered. A huge box with a much smaller box inside. So much for saving the planet! 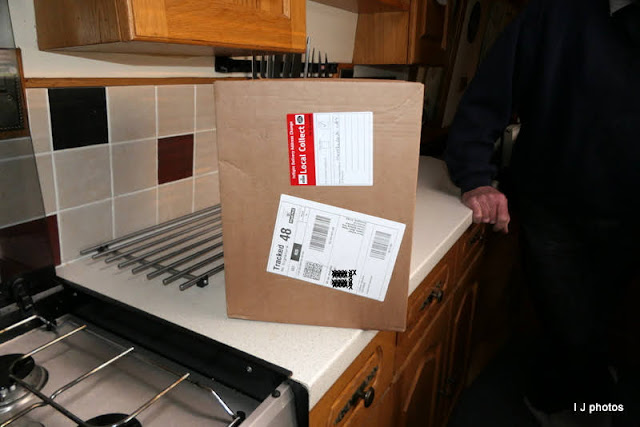 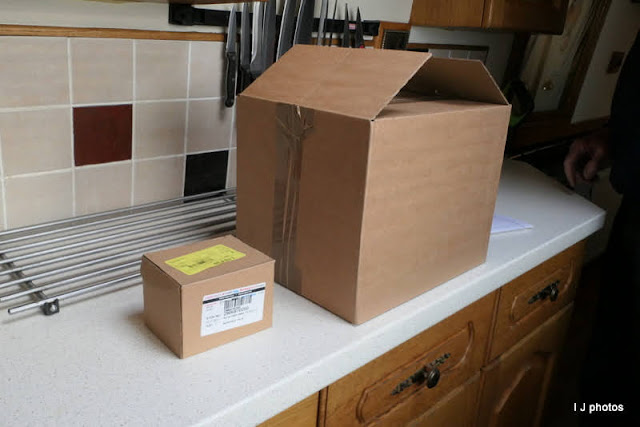 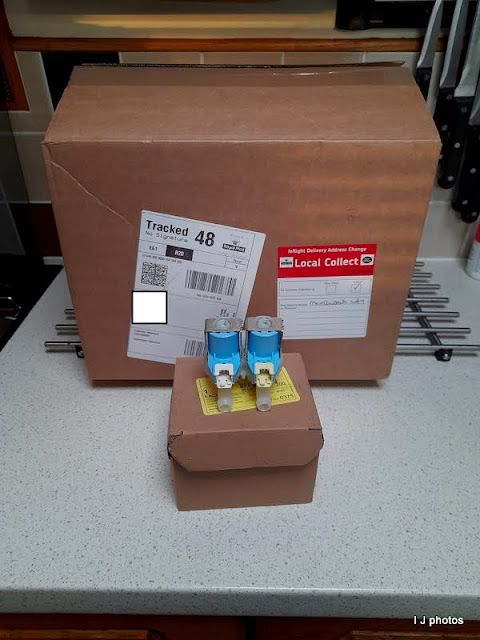 Then we still had issues with the Webasto heater. You may remember the clouds of white smoke filling the surrounding countryside as the thing was fired into life when we were in Chester. On our return to Langley Mill, Steve, one of LMB moorers, took it for repair. It was returned two days ago saying it had been sorted (don't ask me what was replaced because I have no idea) but a strong warning to Ian telling him that having a back boiler on our stove was doing it no good at all (?) Anyway Ian fitted the Webasto back in, fired it up once more and....oh no!!! water peeing from the join in the casing! Turns out the gasket hadn't been replaced so another phone call to Steve, a removal of the heater once again, and now we await Steve to fetch it for yet another repair! At this rate we would have been better off buying a new one! 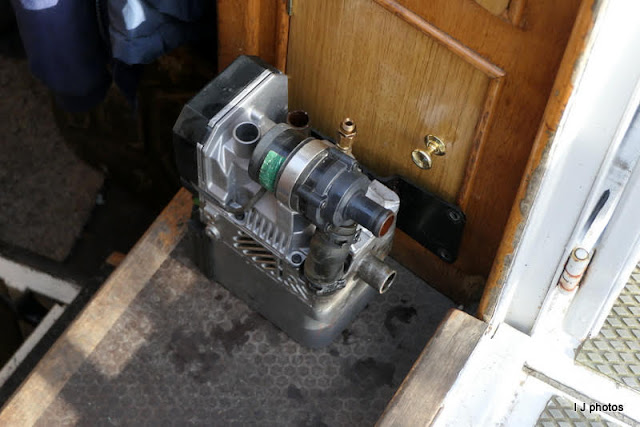 The weather turned mild, great opportunity then to let the stove go out and remove the back boiler. Found it a bit chilly next morning but a borrowed small electric heater from ECP&DA which warmed FS nicely. So first things first, sweep the chimney. Crikey how much soot??? Filled the ash pan completely and we deduced most of it was because of the wood we had burned during a cold spell. Anyway Ian soon had the water drained from the boiler, made up four steel plates to fit over the two holes left in the back, inserted a fire brick and hey presto the job was done. Now, this could just be a coincidence but the stove seems to be giving off more heat, so much so, that we had to open the side hatch and front doors to cool FS down. 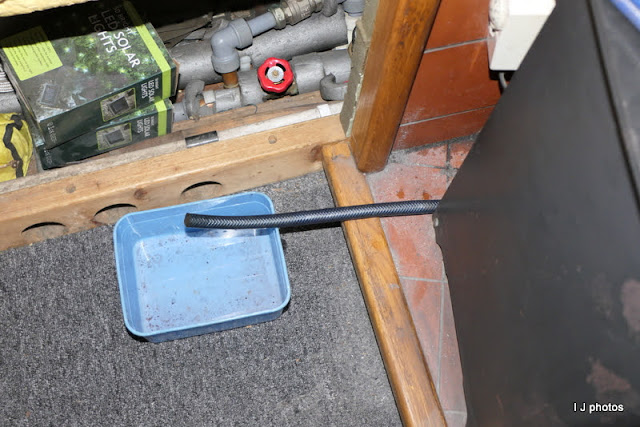 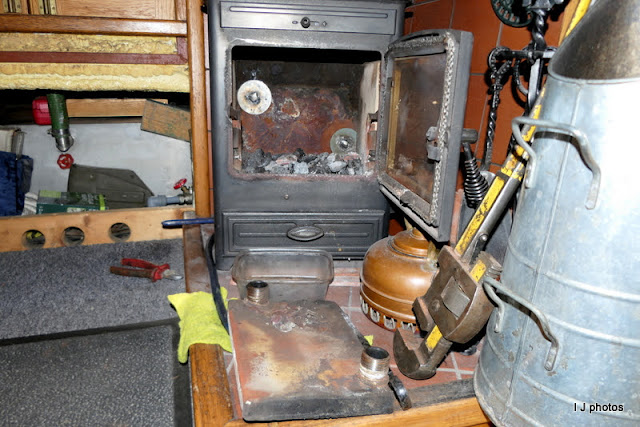 Other jobs tackled by my man that can was an oil change, easy and no problems during that task.  tinkering with the engine had Ian more baffled because at the moment it only fires on three cylinders  (plugs and tappets were mentioned(????) Not that he doesn't know his stuff, it's just that he's played around and it still isn't right. (I've just realised if anything happened to Ian I would be at loss to sort out any problems and would probably have to join the RCR! Best not 'do him in' then to claim the life insurance. 😇) I have since found out it may be the injectors that need attention and the mentioned of tappets are because of an annoying rattling noise when the engine is running.

There is one more thing that is on top of my list for Ian to do, repair the leg that fell off the bed! It's okay, it was the middle one so no chance of us ending up on the floor...yet!

A stage was reached during this last week when I was going a bit stir crazy. I mentioned taking MB out for a jaunt to break the monotony. A week away would do us good and the Eden Project was a firm contender. Still yet to be decided but rest assured I will be blogging if it happens.

And wildlife is what I see on a daily basis on the feeders. 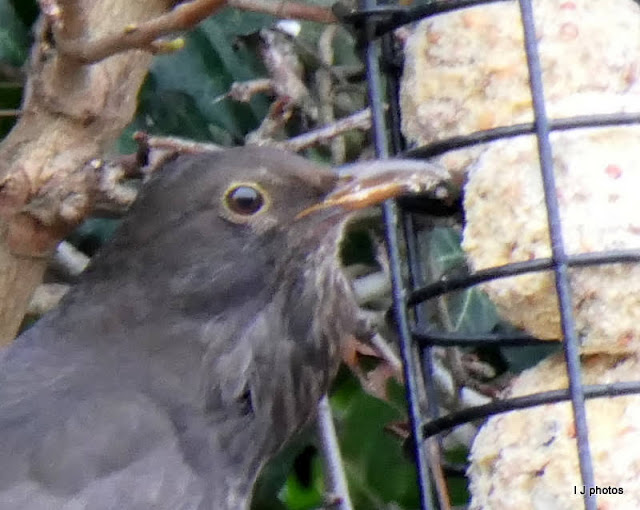 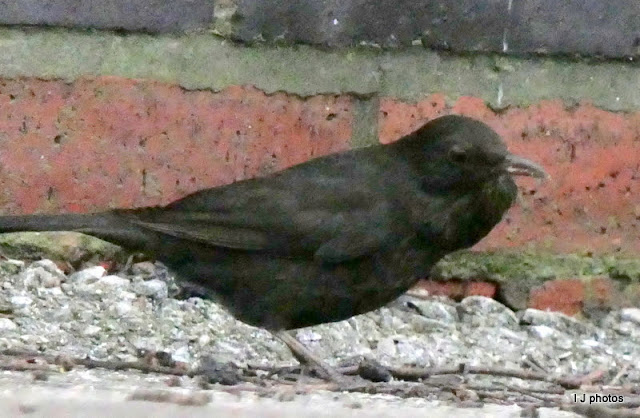 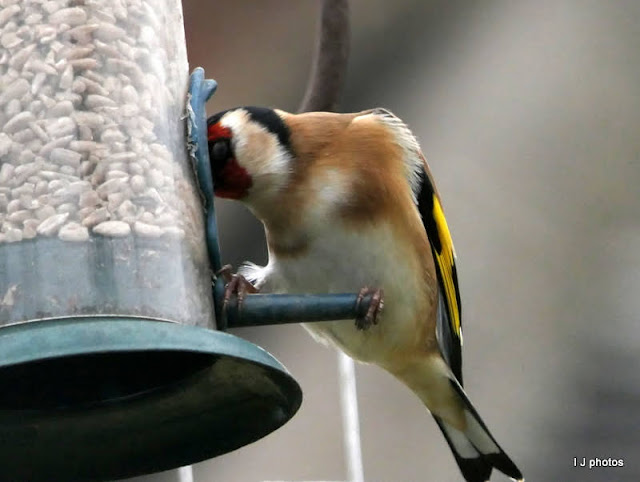 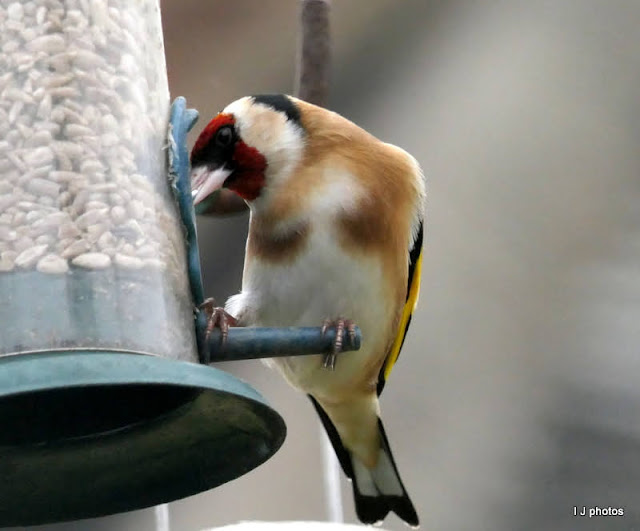 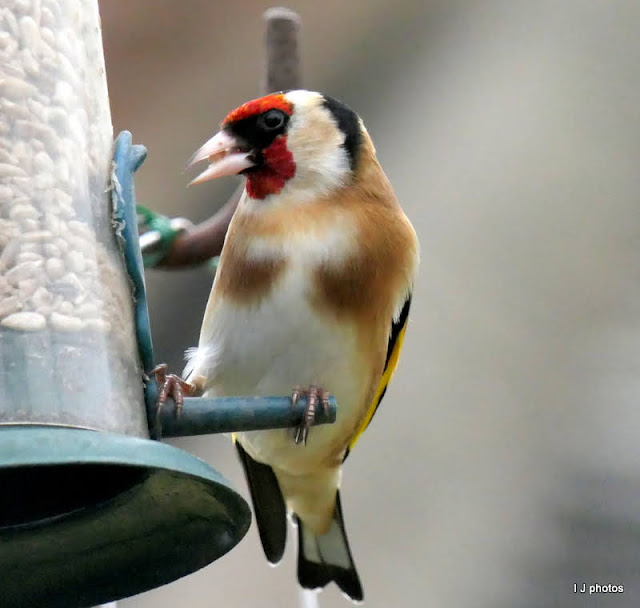 Posted by Ian and Irene Jameison at 3:52 pm 6 comments: