Such a nice chap. Guy Buxton of Giggles Computers. He Arrived mid morning and after going through the same procedures as Ian yesterday realised that some serious work was needed to get it right. After pursuing all options Guy came to the conclusion that the problem could lie within the 'Solid State Drive'. So only one thing for it but take it home to his "computer hospital". I did ask if I could go back to Windows 7 again and the good news was yes I could. Guys recommendation was for me to leave 10 well alone for now as there are too many problems still to be addressed. I know that in maybe 2 or 3 years Windows 7 will not be supported by Microsoft but hopefully by then all the bugs will have been removed. Having already installed Windows 10 on my machine, there should be no problem reinstalling it at later date.
Posted by Ian and Irene Jameison at 5:15 pm 6 comments:

I'm beginning to think there is a problem with Windows 10. Beginning of April both of us decided to install it with some reservations. It had been highly praised by our son, a computer wiz, who urged us to go ahead. So being the dutiful parents we did as we were told! Then the problems started. So to cut a long story short, Ian had a problem getting his computer to boot. Spending many a long day and bending our son ear, he finally had to do Windows 7 recovery, over riding Windows 10. (Thankfully he was still in the 30 opt out option).

So now my tale starts. Having got my head round Windows 10 file structure and getting to grips with it all, yesterday I opened my computer to a message saying it hadn't started properly and an auto repair was needed. Three options available, but no matter what option I chose to restart, it kept coming back to the original screen in one continues loop. Unfortunately I don't have the same options as Ian had to reinstall Windows 7 as I am now commited to Windows 10 (30 day opt out has past) Only sulotion for me was to call out a computer expert at £45 (arriving Wednesday) and hope for the best. Looking on forums this is not an isolated case although if one has the know how one can rectify the problem. We are complete computer nerds so haven't a hope. Fingers crossed the expert can work his magic but I do so wish I had stayed with Windows 7 and not upgraded! 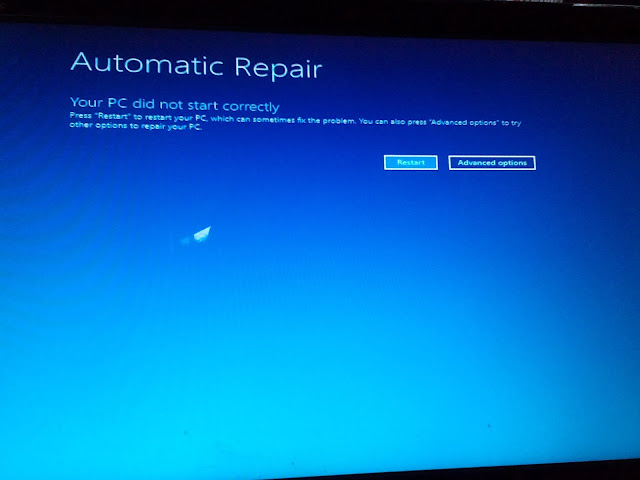 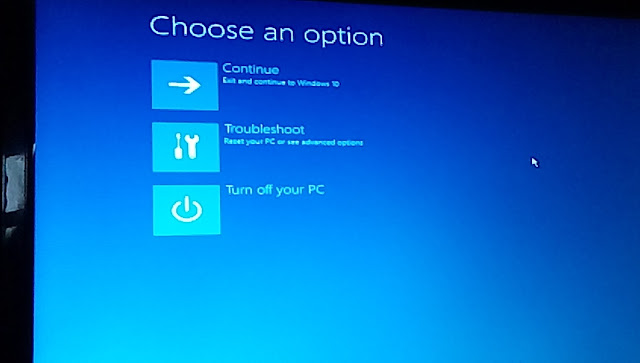 Posted by Ian and Irene Jameison at 1:49 pm 6 comments:

Icebergs on the Erewash????

It's all been worth it! That nerve block injection had worked wonders. No more pins and needles when standing or sitting and I even managed a 3 mile walk this morning. The first real walk in ages and what a great day to do it. Snow started last night (well more like a fine mist really) as we left to go out visiting in the evening. By the time we left our friends 3 hours later a good inch had fallen and the untreated side roads were treacherous. Ian had to call on all his driving expertise to keep the car in a straight line. Make it home we did though, and first thing was to grab the camera for a night photo.. 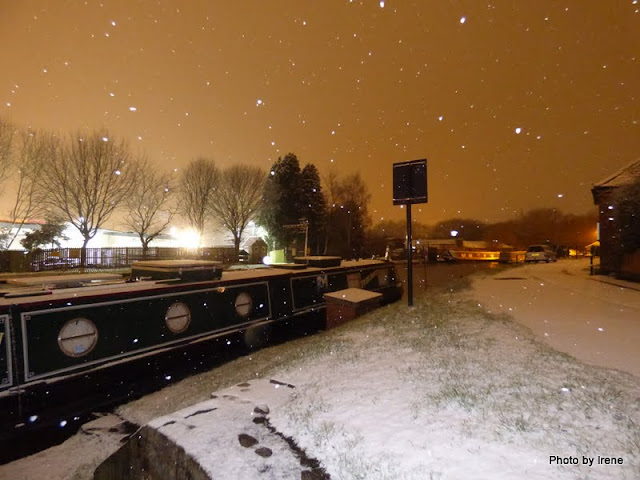 And a blanket of snow greeted me this morning and couldn't wait to get going down the towpath. Nearly went for a Burton at one point trying to get down the slippery steps by the lock but managed to stay upright. Made me a bit wary of where I placed my feet especially on areas that had already been well trodden down. Worse was on a section where a group of children had rolled a huge snowball and, it reaching a size that refused to be rolled anymore, the children launched it into the canal much to a pair of swans annoyance. Anyway managed to return to FS without mishap, back to a welcoming cup of tea and warm by the fire. Shame a thaw has already started. Much prefer these conditions to the wind and rain that  plagued us for so long. 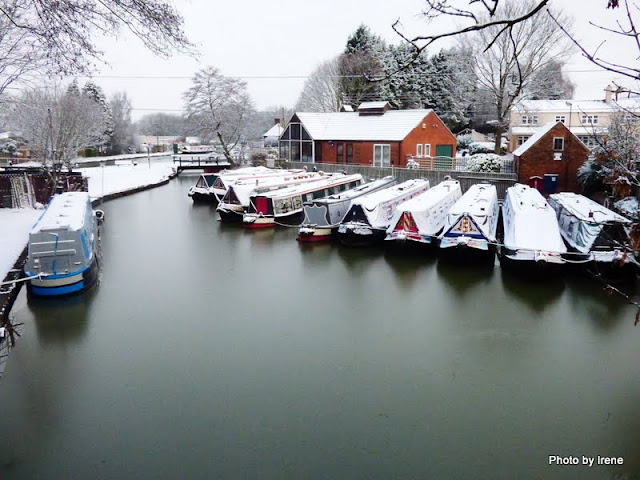 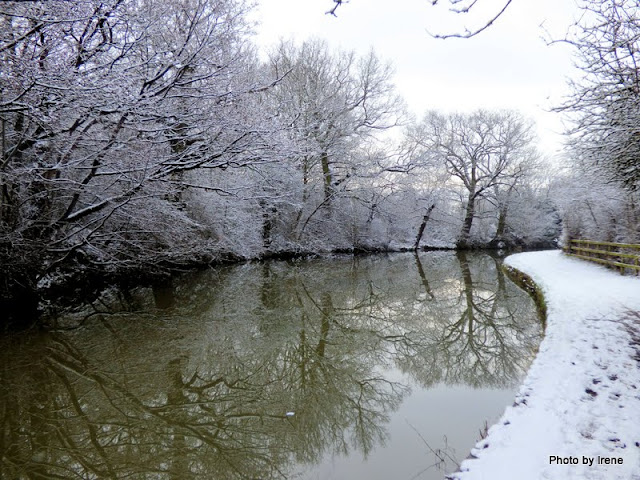 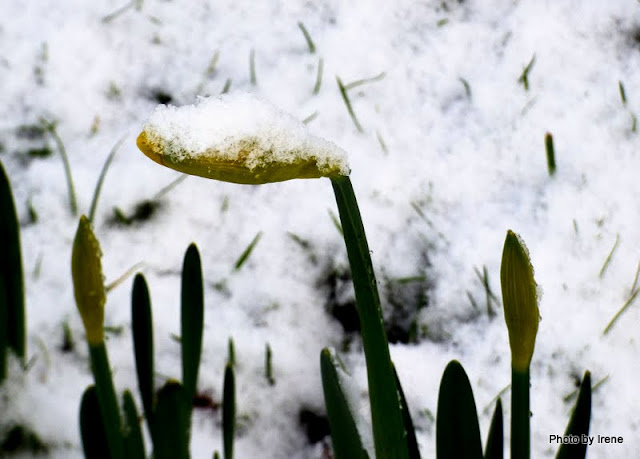 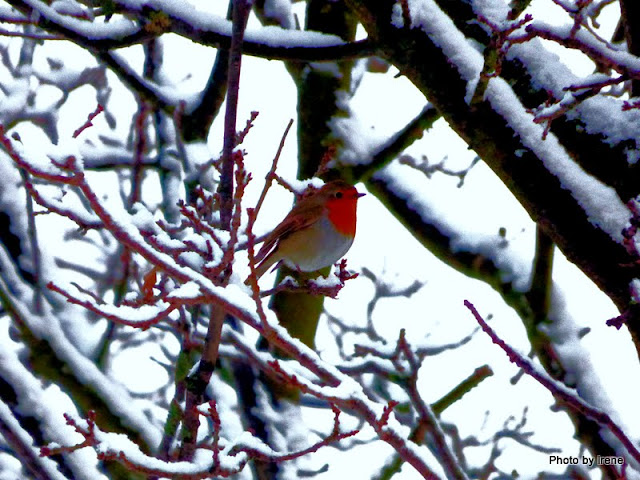 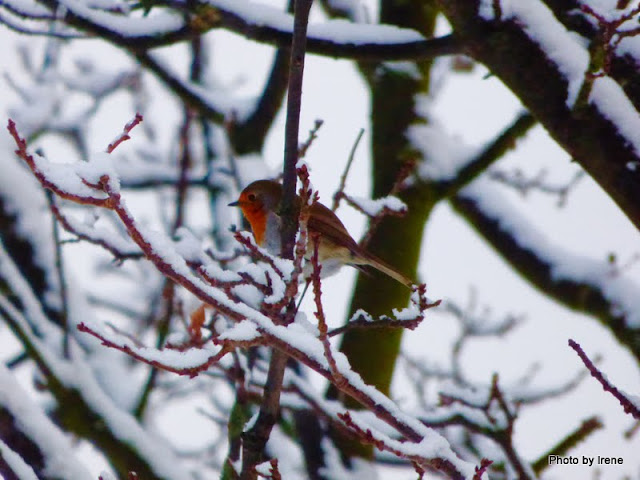 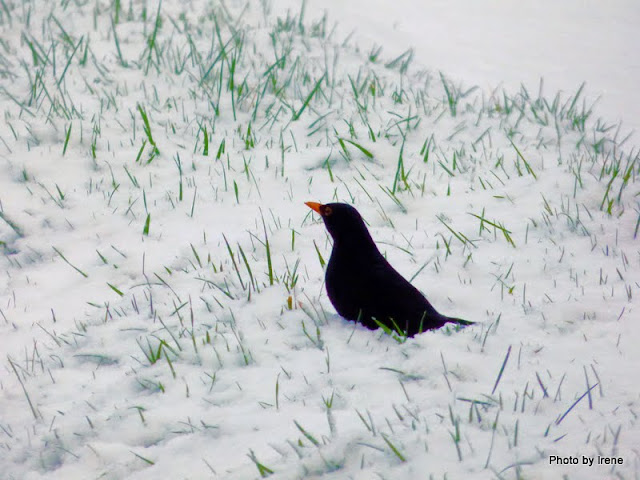 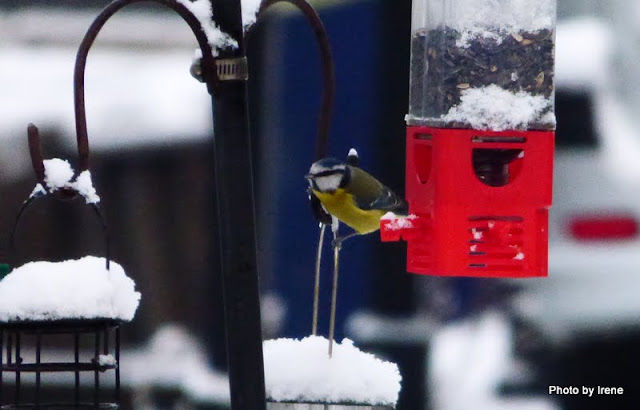 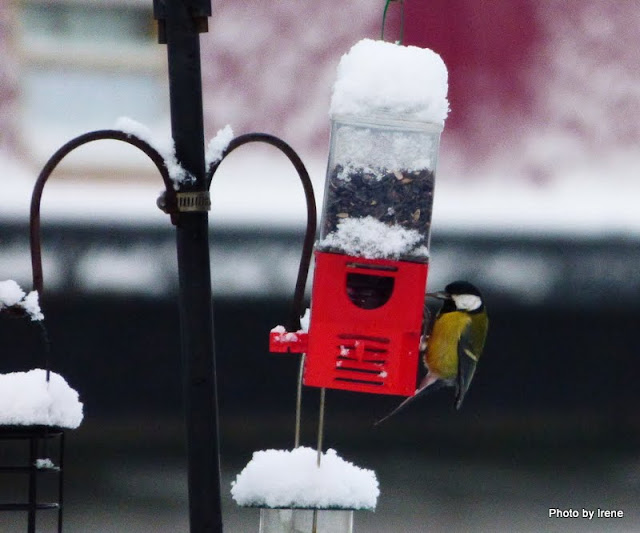 Posted by Ian and Irene Jameison at 4:37 pm 5 comments:

That was not pleasant!

Not a pleasant experience having a nerve root block. Having had spinal injections before and found them relatively painless I didn't anticipate this would be any different. So yesterdays appointment with the spinal surgeon held no fear. Ian drove me to the hospital and then went on his merry way back to FS. Knowing the whole procedure would only take about 30minutes but the recovery time may be anything up to two hours, it was silly for him to stay.

Having got fully undressed and gowned up, back to front so my backside was in full view of all and sundry if I wasn't careful,I was then escorted down numerous corridors (mental map needed for the way back) and led to a small room with xray equipment and trolley bed. Here I had to lay down on my stomach while the nurse did the biz of making my lower back as sterile as possible.
Feeling very relaxed I didn't even flinch when the local anesthetic went in. The xray equipment was brought over and a good 10 minutes or so was spent getting the right set up and a picture of the nerve to be injected.

Then all was ready and a small needle was inserted. The surgoen kept pushing the needle further in and each time a xray was recorded. Then suddenly....OMG ...the pain that shot down my right buttock, calf and foot made me nearly leap off the bed.. Even the surgeon appeared surprised and shot back. "I think we may have found the nerve" says he. Stepping forward he continued with pushing that needle further in until I felt I could stand it no more. "Right lets get this steroid in" says he. Within seconds of the injection it was all over leaving me a bit shell shocked but very relieved that it was all over. 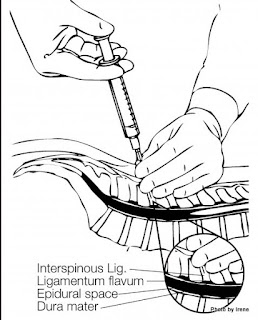 The pain went instantly leaving a dull ache in my buttock and within minutes a stretcher was brought in, told to roll onto my back and wheeled out to a recovery room. A very welcome tea and biscuits was forth coming and after an hour alowed to go home.

Now I await the outcome. Yesterday my leg felt most peculiar, almost like it belonged to someones else but today it is nearly back to normal. Still have pins and needles down the leg but doesent seem half as bad as before. Time will tell but I'm keeping fingers crossed because the other alternative is to have the op.

Looks like winter has finally arrived. -3 and no wind to speak of meant we had a thin layer of ice on the canal to wake up to. Stove has been cranked right up and the wood pile is continually being replenished. Could be worse....the snow in certain parts of the country hasn't reached us, although I do love waking up to crisp white virgin snow. 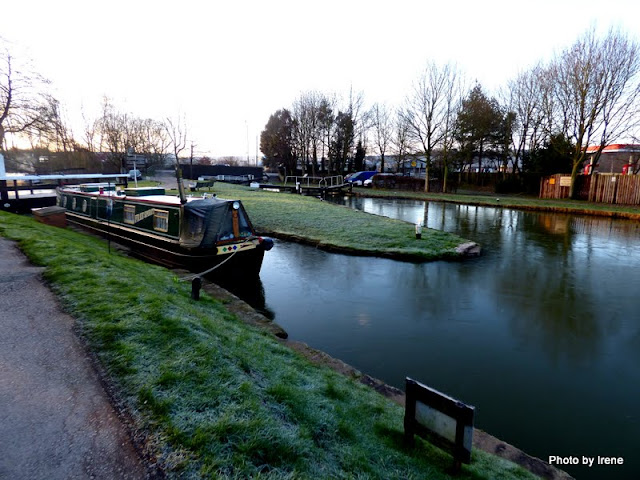 And on the fat balls this morning. 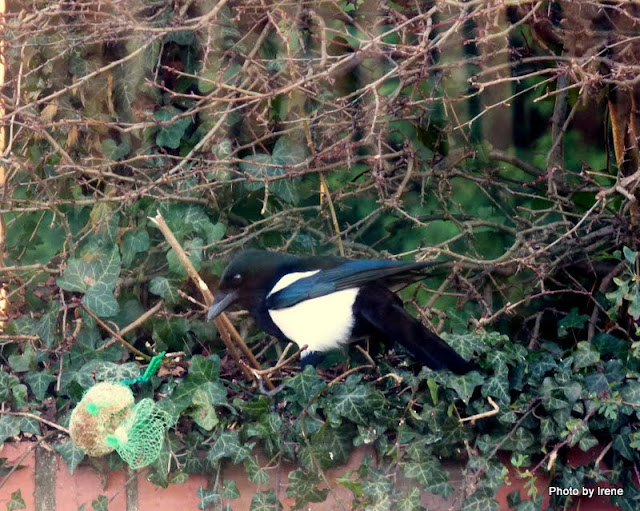 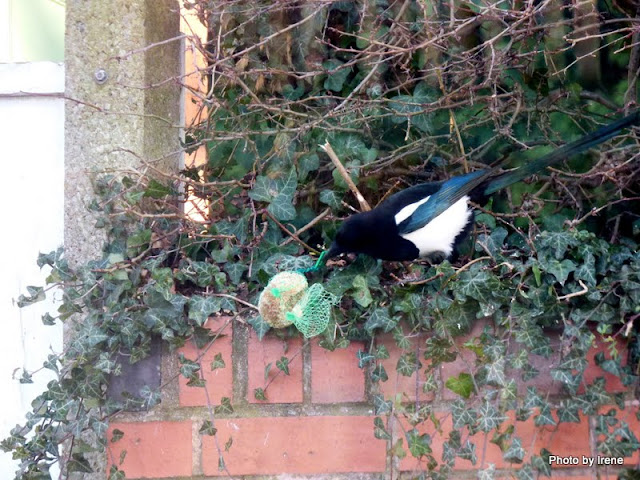 Posted by Ian and Irene Jameison at 4:53 pm 1 comment:

Thumbs up for the NHS

Suddenly realised I'm a bit behind with the blog. Mind you, with nothing untoward happening at the Mill there has not been a lot to blog about. Having spent many a weekend since Christmas and New year visiting family and friends, it's good to be back on FS to get those little jobs done. Cleaning the chimney was a necessity as getting smoked out every time we opened the door was most unpleasant. The coal and wood needed restocking and Ian cleaned our diesel tank by siphoning the diesel into containers and then straining it back into the tank . No water was found thank goodness, just a bit of crud lying in the bottom.

We had a visit from Tom a C&RT bod with several men in tow. Ian wandered down to see what it was all about and was told that a contract was being organised for dealing with the the vegetation  (grass cutting, hedges, trees etc) to improve the look of the Erewash. They took great interest in the basin but it was made plain to the amenities contractor that the basin was not to be touched as  ECP&DA look after this area and make a very good job if it too. So, with the life jackets on and armed with clip board they headed off down the canal to make notes. What the out come will be no doubt we will find out in time.

Hospital appointment for me today to see the spinal consultant. These pins and needles I get down both legs are a right pain. Very glad  the appointment wasn't  for yesterday as no doubt this would have been cancelled due to the strike. I'm in total agreement with these doctors, the hours they work are a joke so good luck to them. Just a bit of a bummer if you had an out patient appointment or waiting for a procedure yesterday. Anyway, never have I been so impressed with a consultant (apart from Ian's) as Mr Sadar. He took time to explain what he had found, showed both of us the MRI scans and booked me straight in on Friday for a steroid injection in the 5th vertebra nerve. He also said I had a protruding disc and if the injection didn't work would operate.As he didn't want me to have to wait too long he has put me on the waiting list (should take no more then a couple of months wait)  just in case the injection doesn't work. Now that is the NHS at it's best.

The weather has been to bad for me to go walking (pain in the hip and leg doesn't help) so these photos are of my visit to brother and sister in law last weekend. More on my wildlife blog if you fancy a look. 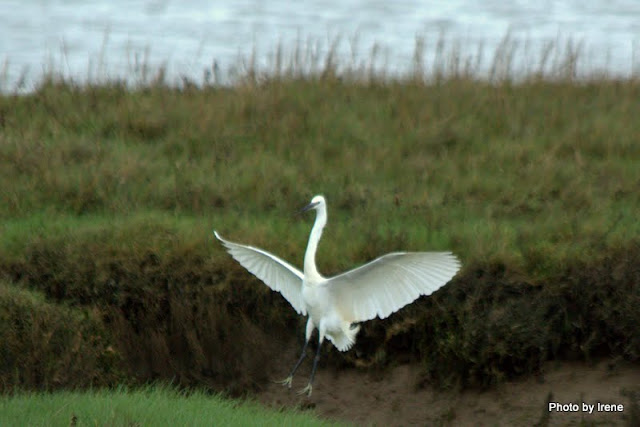 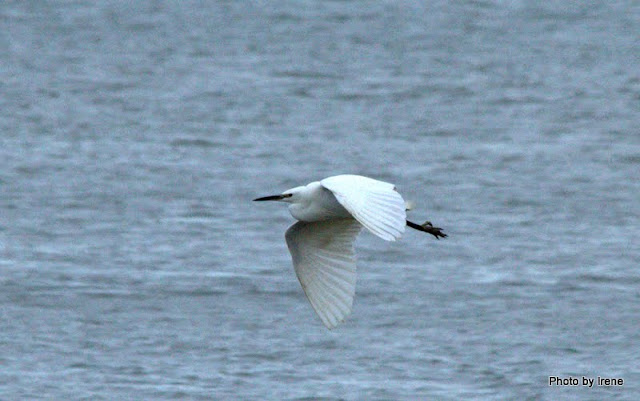 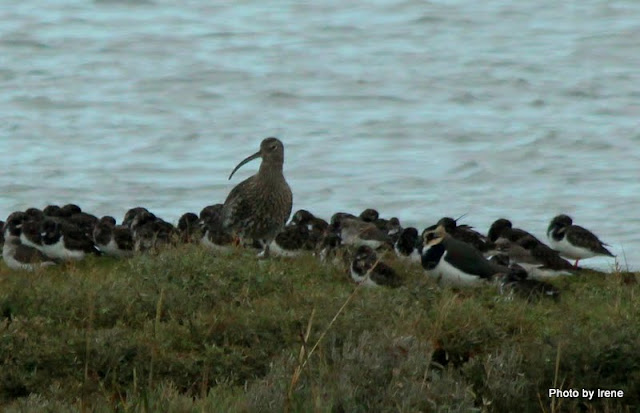 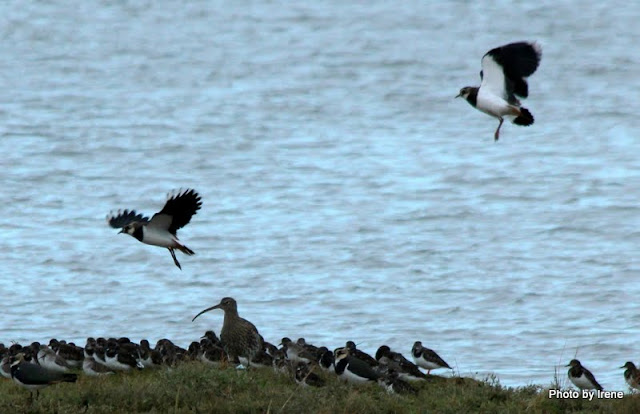 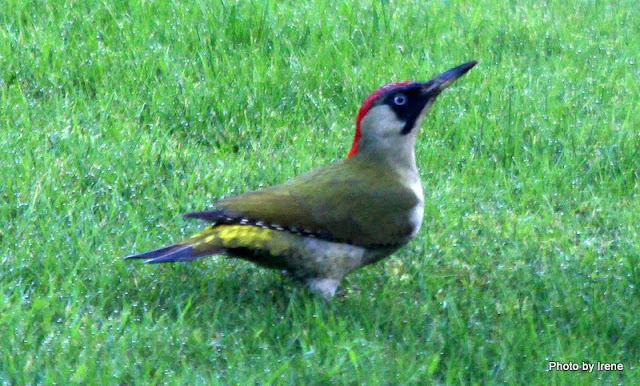 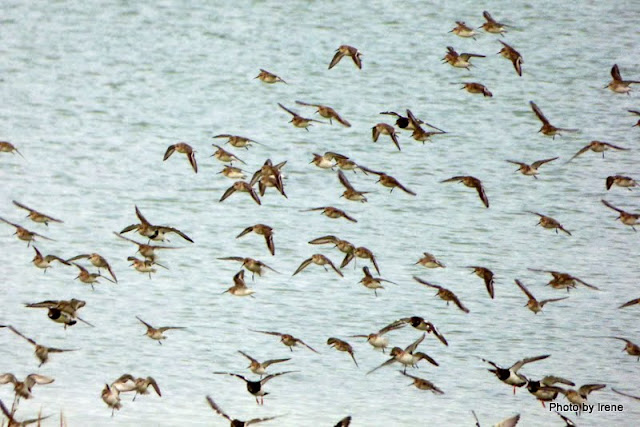 Posted by Ian and Irene Jameison at 7:19 pm No comments: