Settled in on a 14 day mooring 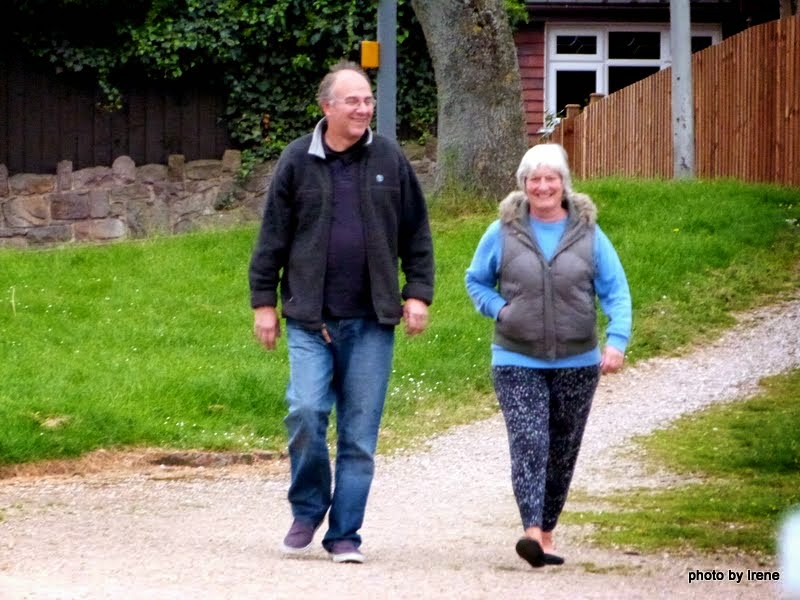 The intrepid duo Roger and Pat arrived last night for the arranged pub outing. They had a 20 minute walk to get to us, mooring as they do at Mercia Marina, and Roger fancied a pint at the Green Man a few minutes walk away instead of the Dragon directly opposite FS. 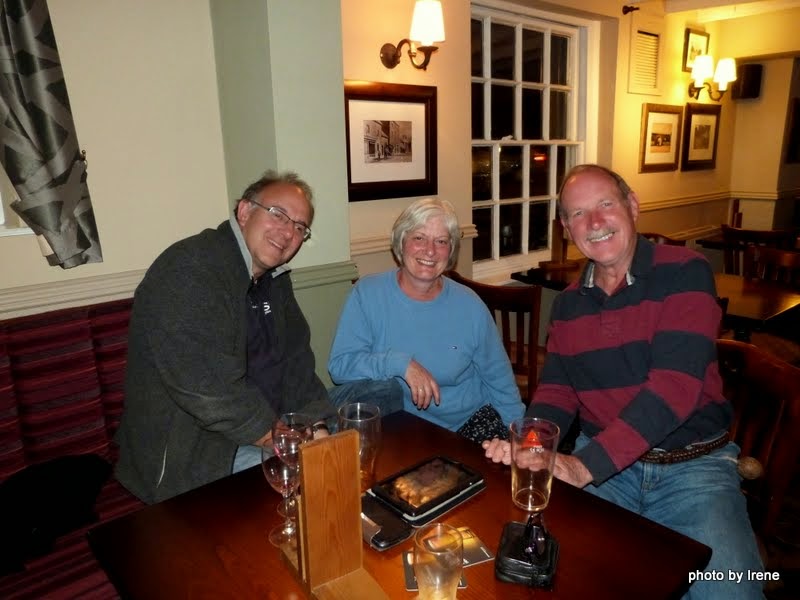 We tried to make plans to get together for this years cruising but weddings and babysitting duties seem to have got in the way (plus we have no idea what the Consultant will say about the MRI result) and now it's unsure whether we will even get together. All we can do is read each others blogs and try and tie up somewhere together later in the year. Lovely to see them both looking so well after their trip to New Zealand and great to catch up with the gossip.

Leaving early this morning we headed off for Branston Water Park. Hardly any boats were on the move and very few moored up. Even here at Shobnall Fields near Burton no boats were seen. Makes me wonder now if there are fewer boats on our waterways. Maybe folk think boating is getting to expensive these days.

Having purchased my fishing licence on line yesterday I dangled my maggot for the first time in 6 months. Catching loads of tiny roach and rudd, I eventually caught this Perch and a small chub. Not bad for my first outing. 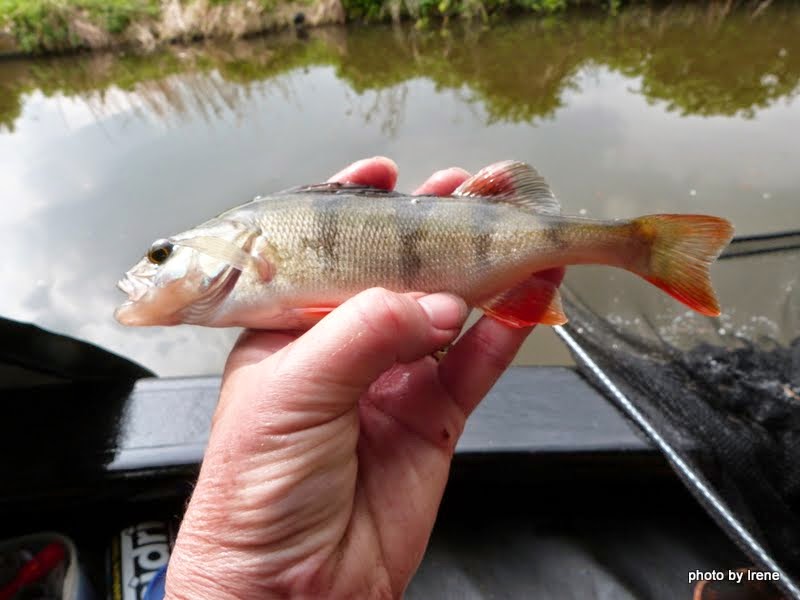 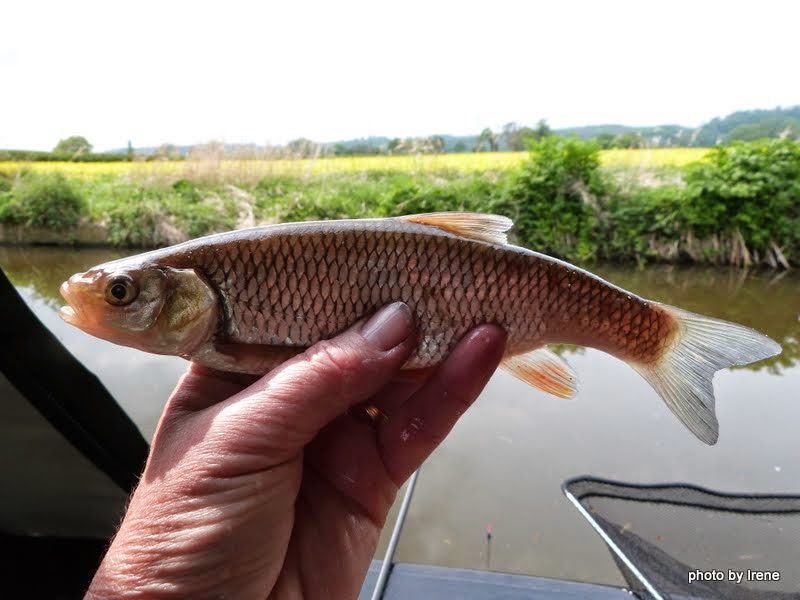 Posted by Ian and Irene Jameison at 7:05 pm 1 comment:

Saying goodbye to Dennis and Margaret (we will see them at Stafford boat gathering in June) off we poodled through the flood lock and out onto the Trent. 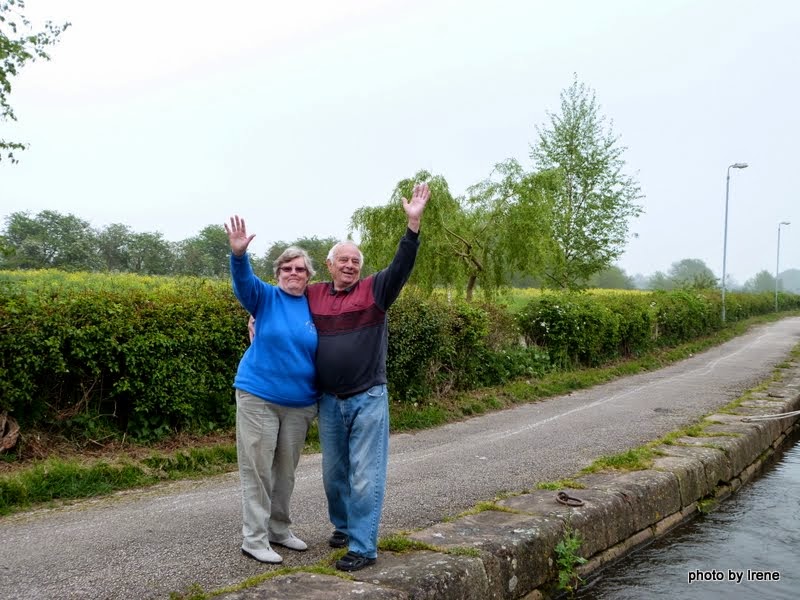 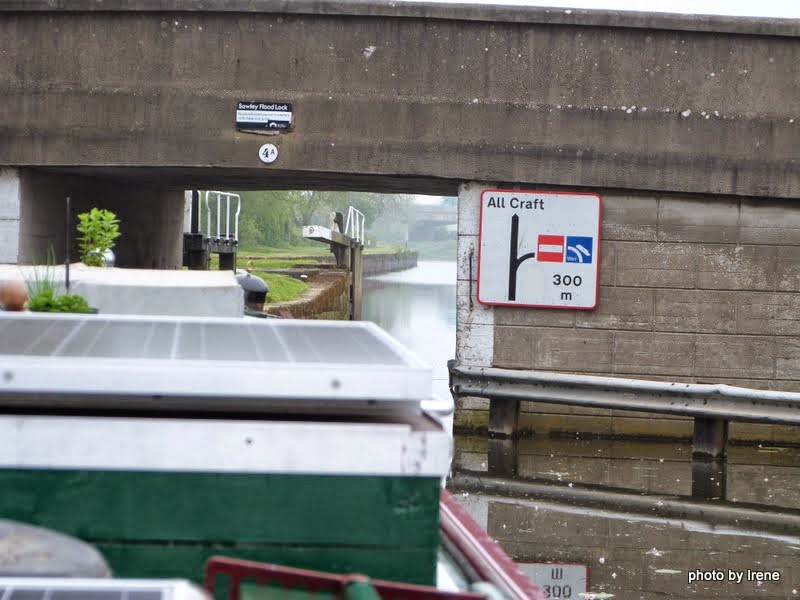 Again conditions couldn't have been better and soon we reached Derwent Mouth and the start of the T&M. I detest the approach to this lock! The wall understandably is very high (in case of rise in river levels) but to try and tie up is to damage ones paintwork! So with Ian having to leap for the bank I swung out to await for the lock to be set. 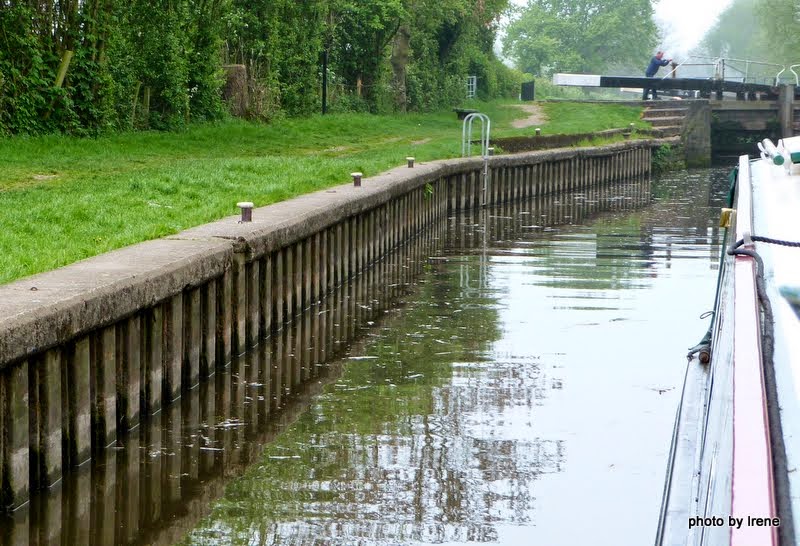 We were very surprised to see Shardlow empty of moored boats. This is one of the hotspots on the start of the T&M. Two pubs, The New Inn and the Old Crown Inn are the main reason but the Heritage Centre is also widely visited. 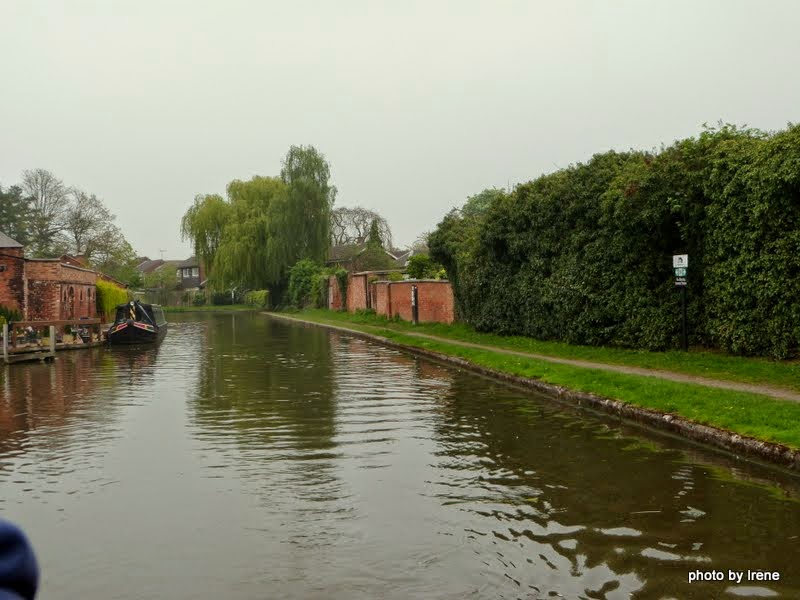 At Weston Lock a fellow blogger came into view. It was Diane and Ray on Nb Ferndale.

We knew they were heading our way by a comment left yesterday by Diane. I do love meeting what I call 'the blogging community. We all seem to get on so well. Maybe it's because of the trials and tribulations we all seem to go through and that we can all relate to. It was only a quick encounter as we had another boat with us waiting to exit the lock, while Ferndale also had a locking companion waiting to enter The chat with Diane was brief, although Ray would dispute that having had to hover mid stream for us to come out! Lovely meeting you both and I hope you enjoy the Erewash.

On the way to Swarkstone we had a slight delay while a tree gang cleared a load of branches from the offside. They had a unique way of bringing the cut wood across. A long rope tied to the branch and then pulled back. Did the trick nicely though. 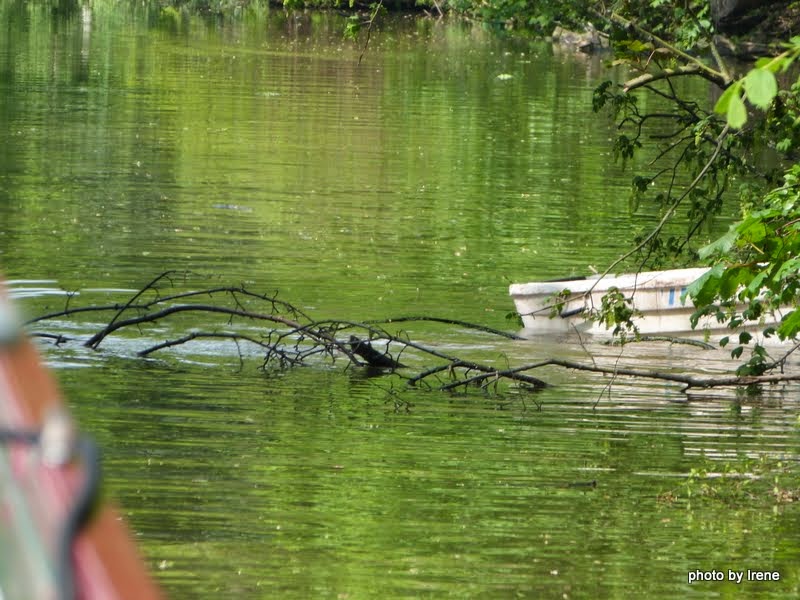 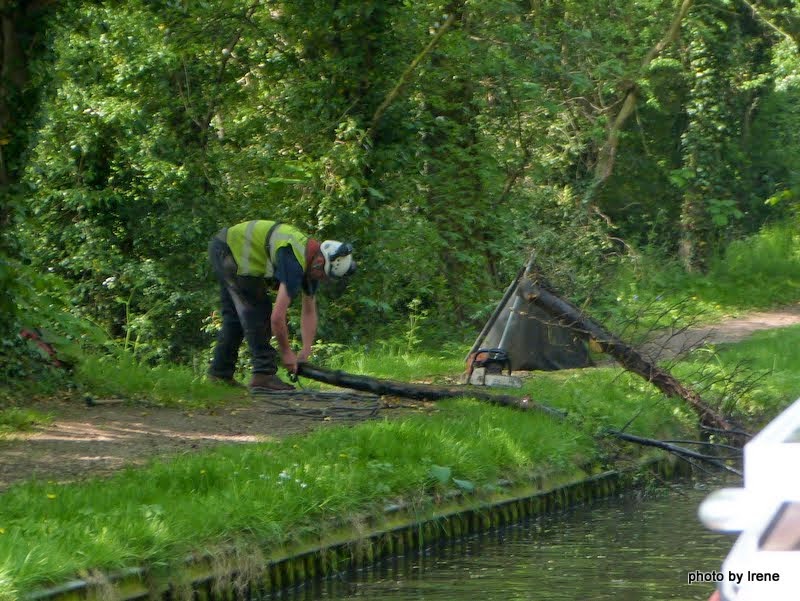 Stenson lock had the self same problem as we reported a year ago when we got wedged solid. Both gates still wouldn't open properly so it appears nothing has yet been done!  Will it ever I ask myself!

Watched by a few gongoozlers we ascended without making a pigs ear of it and noticed that apart from this cruiser with a C&RT notice on it, all the moorings were free. Again another hotspot because of the Bubble Inn (good food and service). I'm still wondering why! 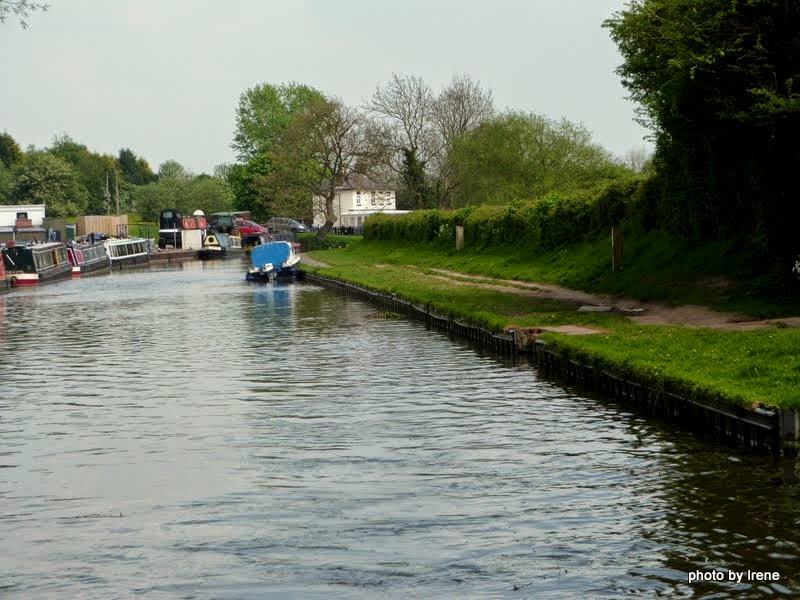 Passing Mercia Marina the new building now dominates the skyline.  Not really sure what to make of it. It could be just a bit OTT. We will see when it's finished. 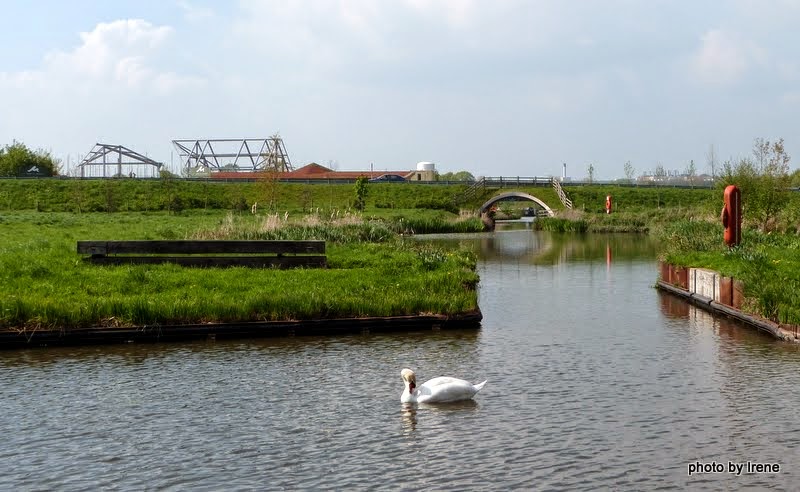 And another favoured mooring devoid of boats. Right outside Mercy Marina handy for Midland Chandlers. Why why why??? Has C&RT had something to do with it. I would love to know!

Mind you the one place we had decided to stop for the night was heaving. Willington! Luckily we found the last mooring available right outside the The Dragon. Very handy as we will be meeting Roger and Pat The Cat's Whiskers tonight for a drink. They have only just returned from their trip to New Zealand so we have a lot of catching up to do. 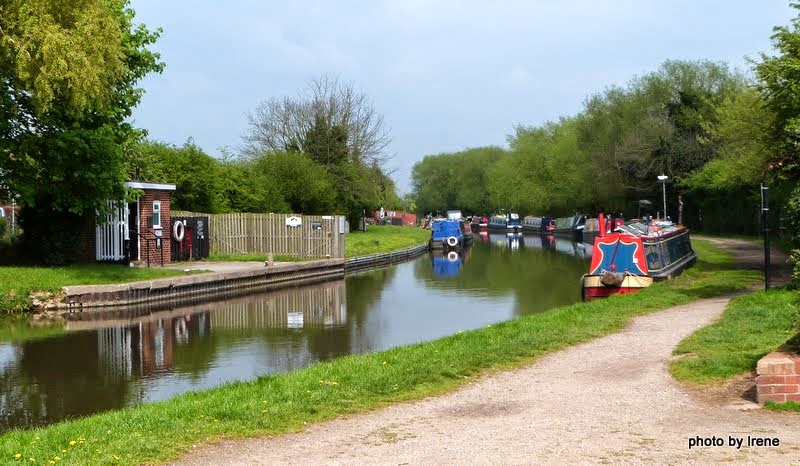 There is a and finally tonight. As we approached Willington we could see some sort of commotion in the distance. Pity the chap in this dinghy! 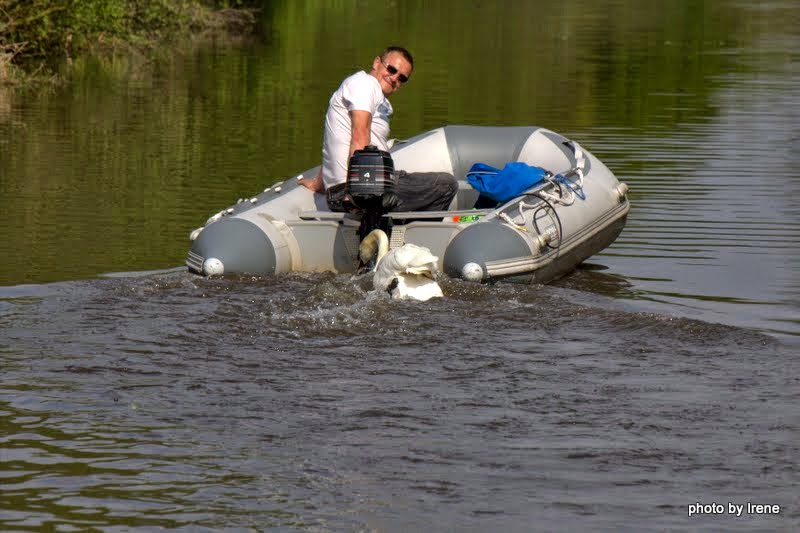 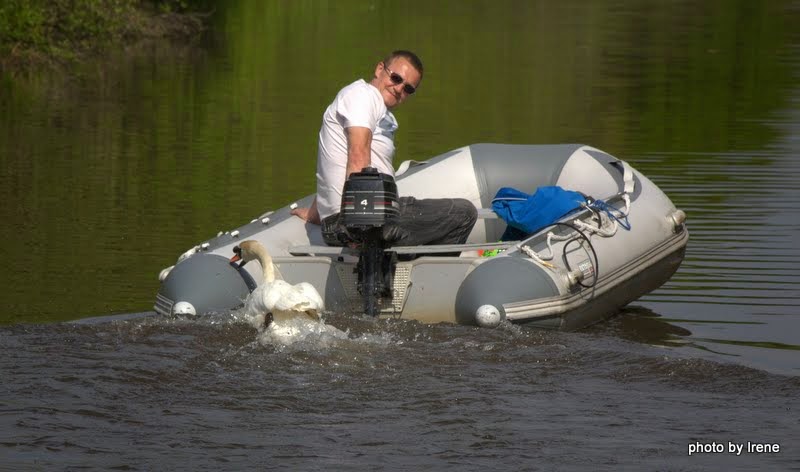 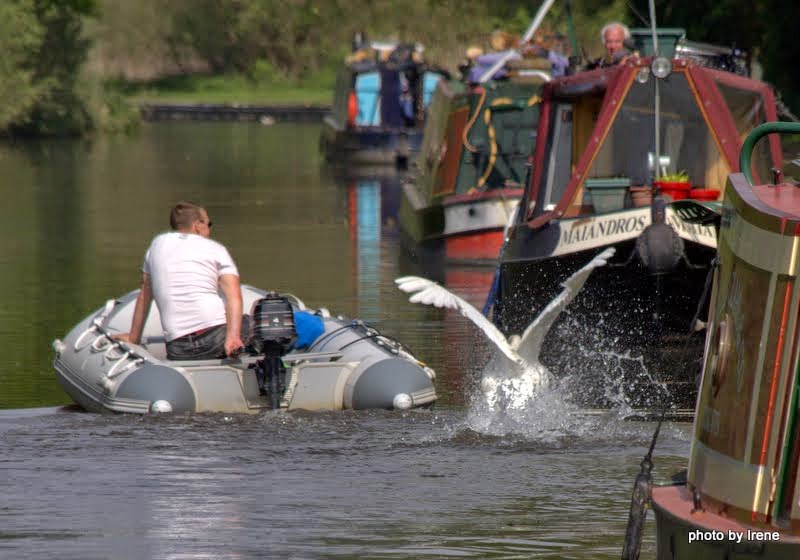 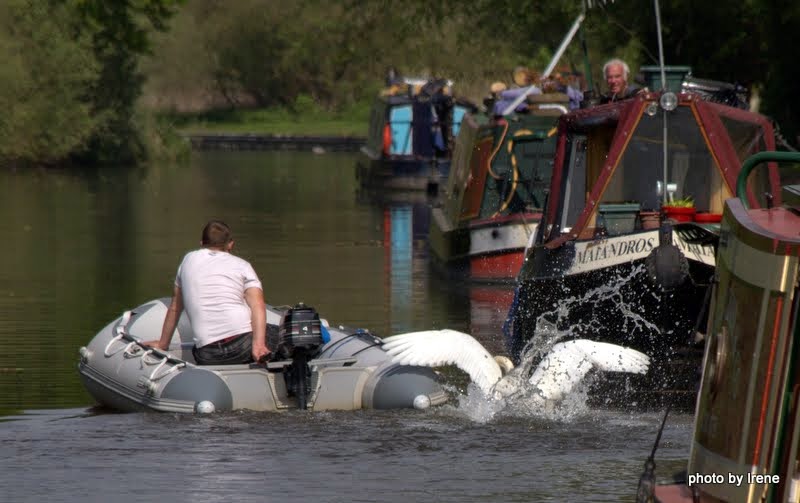 Posted by Ian and Irene Jameison at 7:05 pm No comments:

Ian had a few jobs to do before we left Trent Lock and knowing that Dennis and Margaret were also heading for Sawley today we waited until everyone was ready before setting sail at around 2.30pm. The river was in perfect conditions, just a gentle flow, and once we had entertained the gongoozler by descending the lock, we swung against the flow and headed for Sawley.


Ian had fitted a new rev counter while we were moored at Langley Mill and wanted to see if it was correctly calibrated so he got the revs up to 2300 and we took off like a bat out of hell, flying along and reaching the dizzy speed of 6 mph! The meter ran true so he was one happy bunny.

Sawley Lock came into view and we half hoped that Dave the Lock Keeper would be manning the lock. No such luck so dropping Ian off by the steps at the left hand lock ( which was against us) I then had to shoot across the river to enter the right side lock which happened to be in our favour. Not an easy task especially as Dennis was hot on my tail! We found a mooring suitable for the both boats and while Ian walked back to Trent Lock to fetch the car and take it back to our bungalow in Sandiacre, I went with my macro camera and Jade to walk across the wild meadows.

Ian eventually returned by 6pm having only just caught the bus back. He hailed it as he was running to the stop and luckily the driver stopped for him. His words to Ian was "by 'eck your fit"!
Posted by Ian and Irene Jameison at 7:05 pm 3 comments:

Having come off the dock last Friday our initial plan was to make post haste for the Ashby canal in readiness for Grandchild no 4. Plans changed somewhat when we looked on Google maps for the close proximity to Swadlincote.  It appears Branston Water Park is a tad nearer and also very close to Burton Hospital (where Christine will have the baby). So if that all important call comes I will be able to make the dash to look after Josh a bit quicker. Ian has deduced studied Nicholson that it should take no more then two days to reach Branston and as we may have to overstay our welcome, it would be better not to arrive to soon. Baby is due on the 13th May so unless she goes into labour in the next few days, we should make it in time. I only have a few photos of our very pregnant daughter and I loved this one with her brother Colin on our walk to Sawley a few days ago. 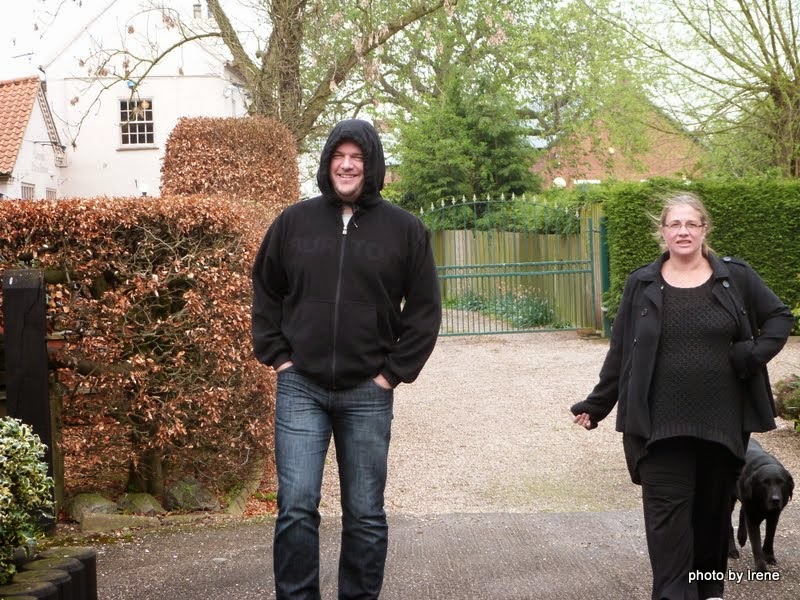 So no more of my wildlife 'And finally's' but I have put a link on my sidebar for you to click on.
Posted by Ian and Irene Jameison at 6:59 pm No comments:

Made a boo boo

I may have screwed up with the link on my last post. Kevin TOO alerted me to the problem so I'll try again with this link. Fingers crossed it works this time. (:
Posted by Ian and Irene Jameison at 10:10 pm 1 comment:

All my regular readers will know of my passion for wildlife photography so I have created a new blog. The photos I post will be instead of my 'And finally' photos on Jameisons Afloat so if you are still keen to view the photos please click on this link and add me to your blog list. Thanks ever so. Xx 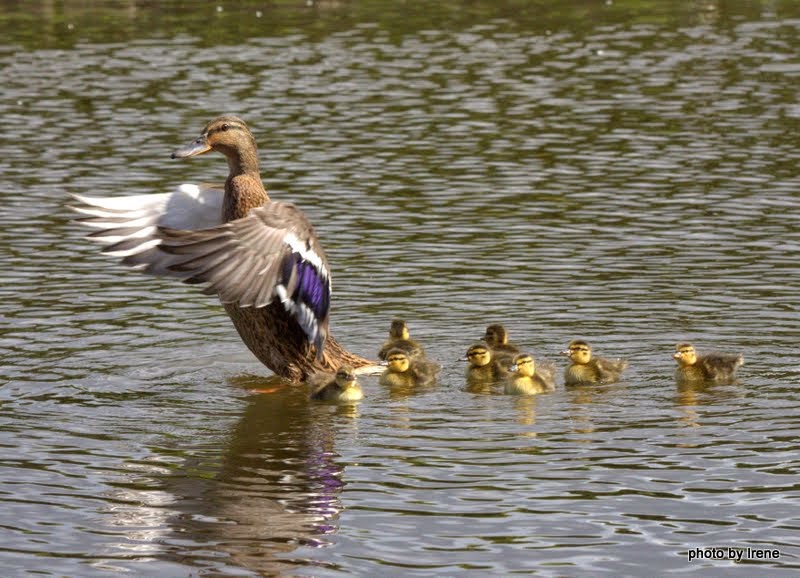 Posted by Ian and Irene Jameison at 9:01 pm 2 comments:

A bit of a worry

It's not been a good few days. Yes the boats blacking is finished and it all looks very shiny and nice but my enthusiasm has waned since Ian told me of his concerns over the tumour on his back. Just before Easter he was traveling with Margaret in her car when he felt most uncomfortable sitting in the passenger seat. After he expressed his concern I did no more then look and feel the lump. Sure enough there was a very definite change. With it being Easter we had to wait until Tuesday to phone the consultant and he immediately arranged an appointment for Thursday afternoon.

So yesterday saw us both back in the oncology outpatients waiting with trepidation for the Consultant to call us in. After 45 minute wait we were finally seen by the registrar. Not exactly who we expected as she had no idea of Ian's condition other then reading his notes. After a quick examination she thought it best that Mr Henning (Consultant) should come to have a look. Another 15 minute wait before he finally appeared. After his examination he confirmed the change in the tumour. He also said that he was pretty sure the top part of the lump had shrunk but the bottom part (the larger lump) had   grown slightly. But was that because the top part had shrunk??? Without an MRI it was difficult to tell so that has been arranged for the 11th May. I asked the question on how much chemo could the body take and his answer, it can go on indefinitely. He also mentioned that radiotherapy may be the answer this time. That will be discussed at the next meeting. So not sure now what the summer will hold. He told us to carry on with our plans for the time being but we may be called back to start the treatment if it turns out the tumour is once more on the move. This could be any time after the 22nd May. We wait and see.

Here is the final photos of FS in the dock including the resident dry dock pests! 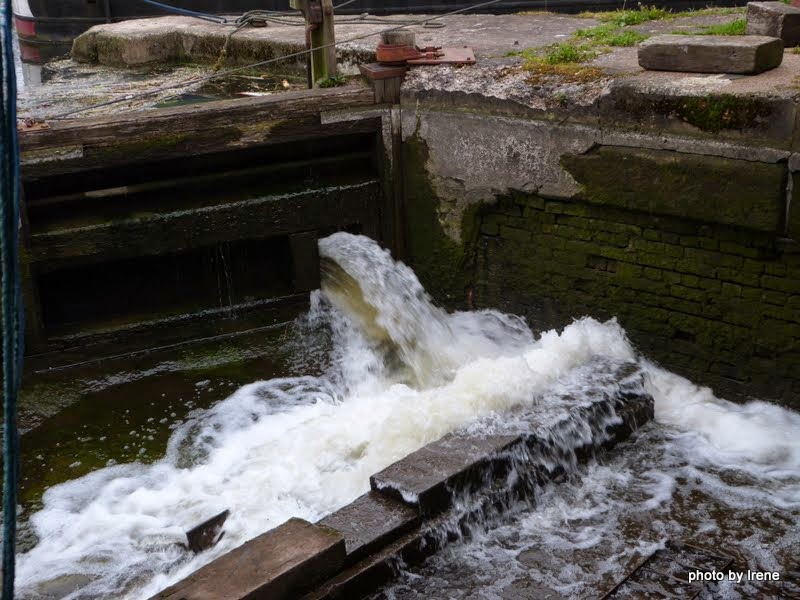 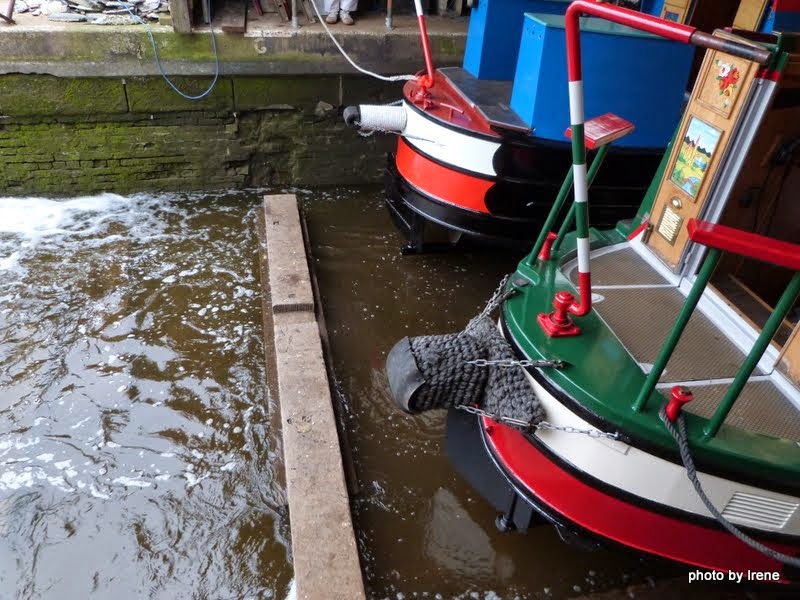 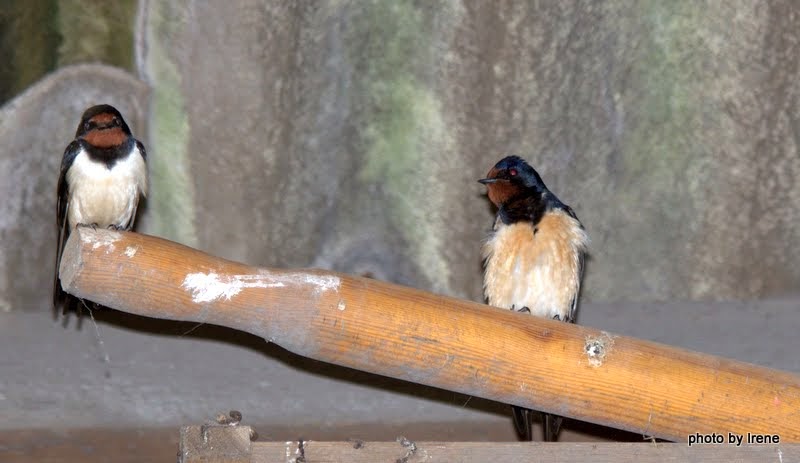 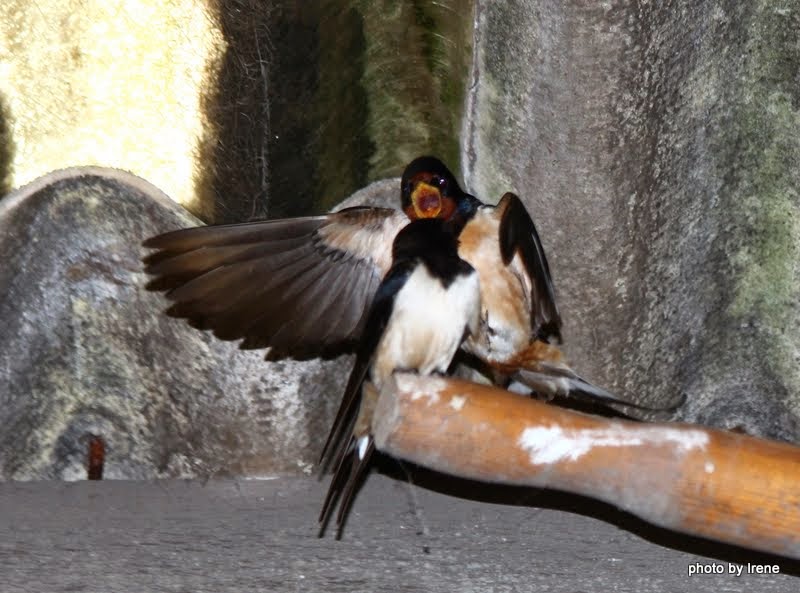 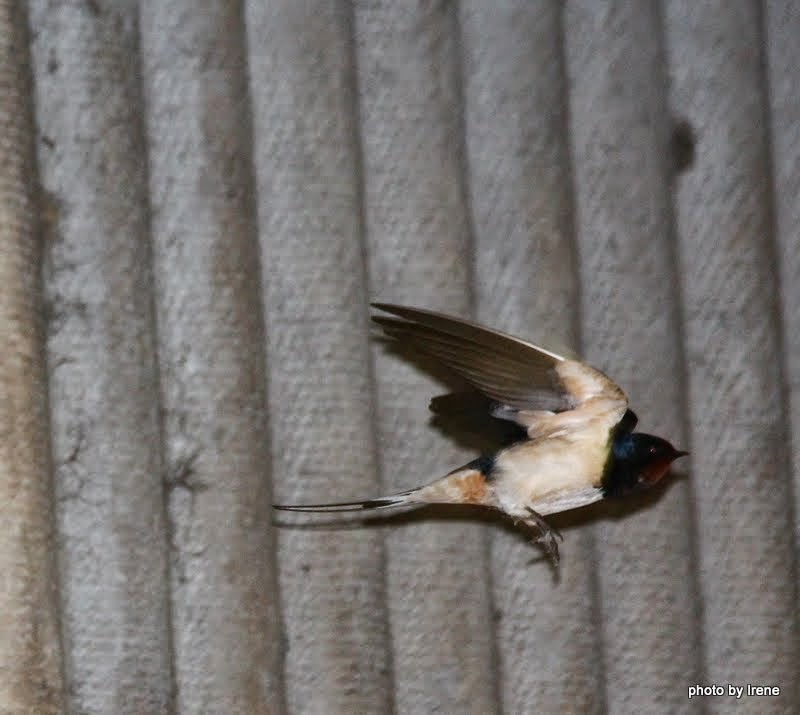 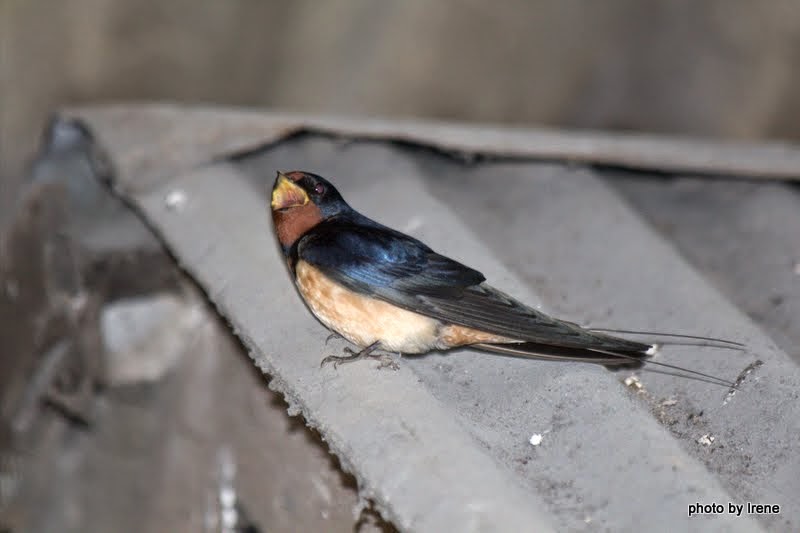 Posted by Ian and Irene Jameison at 6:10 pm 4 comments: