Yea it worked, census all done and dusted. Many, many thanks go to Pip, Mick Nb Oleanna and Barbara for their help and advice. A last phone call yesterday and we struck lucky as the lady who took the call had already dealt with the same problem with other boaters. So we finally got FS registered to premises with postcode and an access code was sent by email to Ian this morning. The form has now been completed and sent. With any luck the next census in 10 years time won't be as stressful.

A few days of good weather got Ian out doing more of the touch up on FS's paintwork. With us being in the swing bridge mooring it was so easy to push across and do the offside. He really wanted to slap some bitumen on the bow so my idea of pushing the bow towards the near side whilst leaving the stern tied on the offside worked a treat. 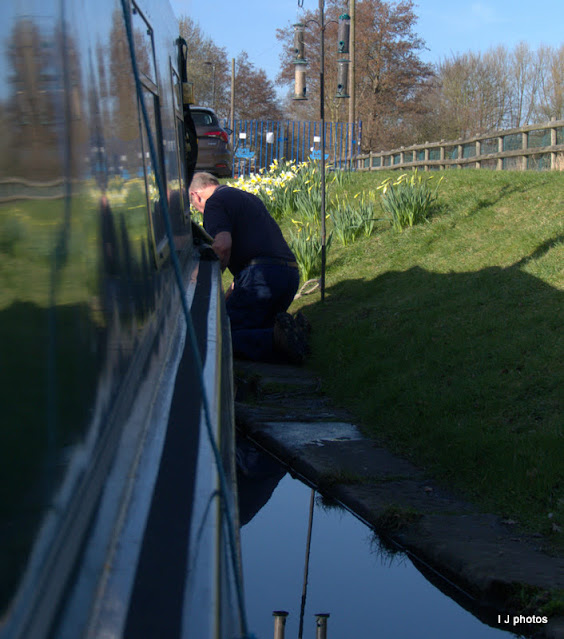 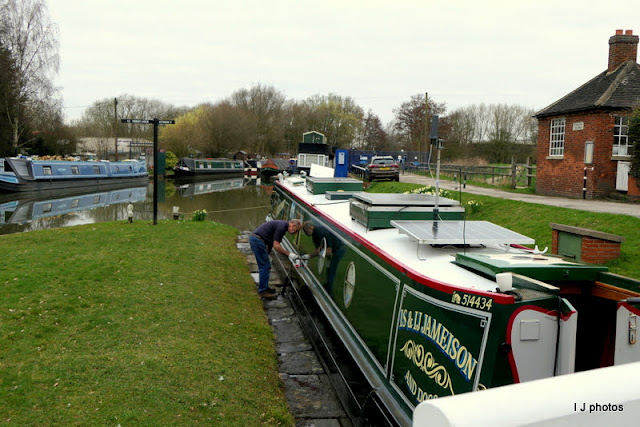 Oh and the swans are at it again. Their mating has once again born fruit. Last year's nest was once again picked, although this wasn't their first choice. They originally started building right by the electric box but no way would we allow that as Ian would have been attacked every time he went to feed the meter! So the first egg has been laid. We now wait and see how many more will join it. 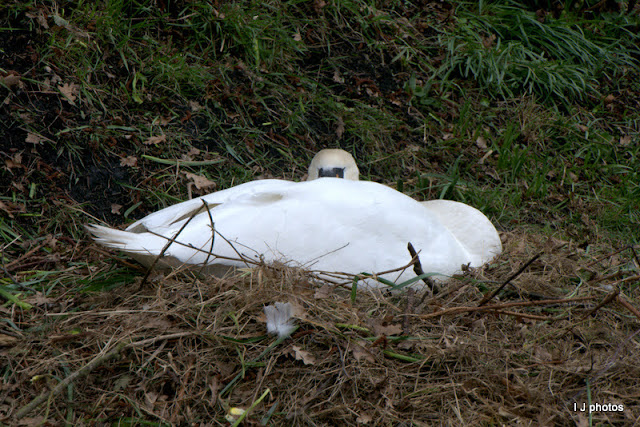 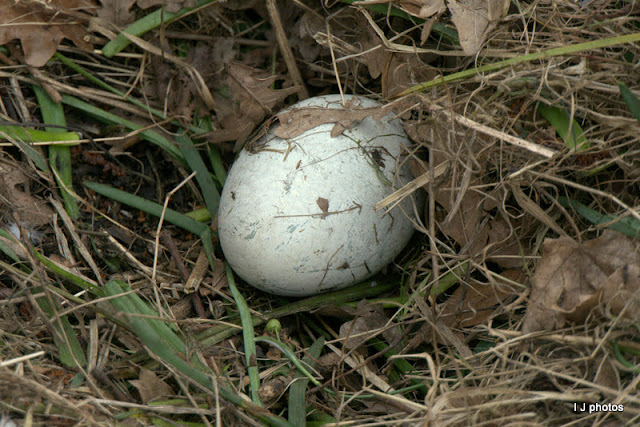 And our Cob lawn mower keeping the bank by FS nicely mown. 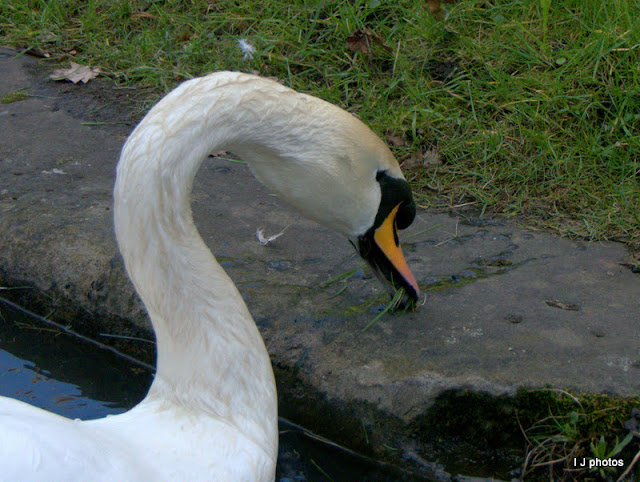 Posted by Ian and Irene Jameison at 4:08 pm No comments:

The census...required by law for everyone to do. So what do you do if you can not get an access code to fill the form in online?  Well we have tried phoning the census.org helpline and failed to get any sort of answer from any of those sitting by a phone to answer queries, and we have phoned every day for nearly a week. All the operators bar one said without an address there was nothing they can do, although the one did say agents were being sent out to boaters and homeless people giving out forms. And then blow me down she suddenly said " Oh sorry, that isn't happening due to the Covid restrictions"!!! Talk about banging ones head against a brick wall! Our problem is no permanent address. All our mail goes to our daughters but of course we were told no second form can be sent to her not even as a c/o so once again we were stumped. At the last census we had the same problems but in the end were told to say we were visiting our daughter on the day. But this time of course, that is not an option because of the lockdown rules. If anyone has any idea of how we can get the form, baring in mind we have only two days to go, we would be eternally grateful as the fine of a thousand pounds for not sending in the form doesn't bare thinking about! Thanks.

Posted by Ian and Irene Jameison at 9:53 am 4 comments:

Whats been happening? Well not a lot!

It's been a while since I've touched base with the blogging fraternity but not a lot has gone on around these parts. Weathers been awful so we have not partaken of  many walks. It was either too cold, too wet, too windy or if I'm totally honest, been too lazy! Not much to do, and at times, couldn't even be bothered to place my head outside the back door unless shopping was a necessity or my birdies stared longingly at the feeder's cos they needed refilling. Ian has tried to find things to do but there is only so many times one can check the engine, search for objects to repair and complete jigsaws. He did however, manage to get outside on the odd day when the weather turned dry to slap on some bitumen to parts of the hull which had been scraped by me (I was told it had to be my fault) when entering locks or trying to moor. As for me, another painting by numbers has kept me occupied, more challenging than my Labrador painting because of the very small areas to fill in. Still it has kept  me sane for the time being. 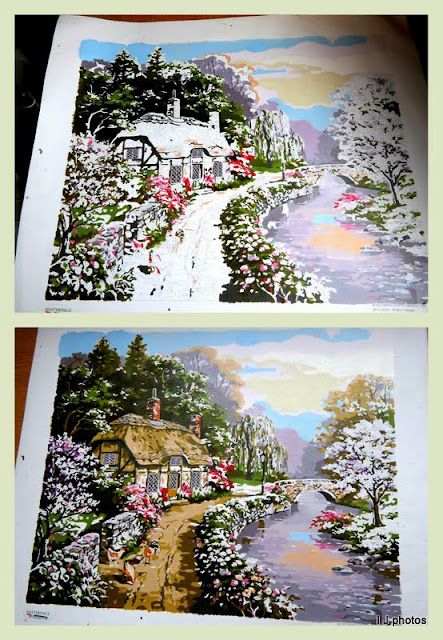 Today we had a bit more excitement. A breasted pair of unpowered boats appeared by our bow. Of course, we had to find out what was going on so Ian poked his head outside the cratch cover and was told by Vikki (owner of Langley Mill Boatyard) that this was the day the houseboat was going into the dock to be blacked.  Wow, for as long as we have moored here never has that houseboat moved off its mooring and, I might add, we've been at the Mill for over ten years! So it was a 'grab the camera quick as you like to record this momentous event. 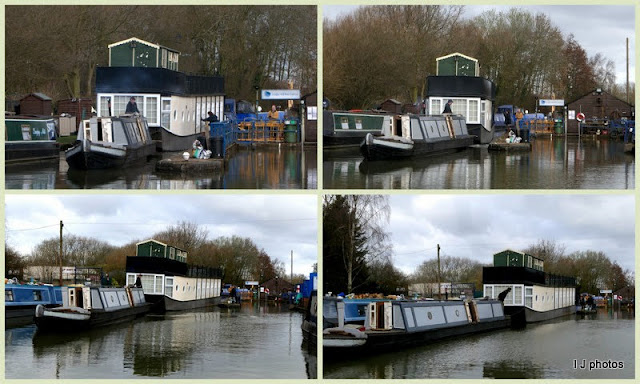 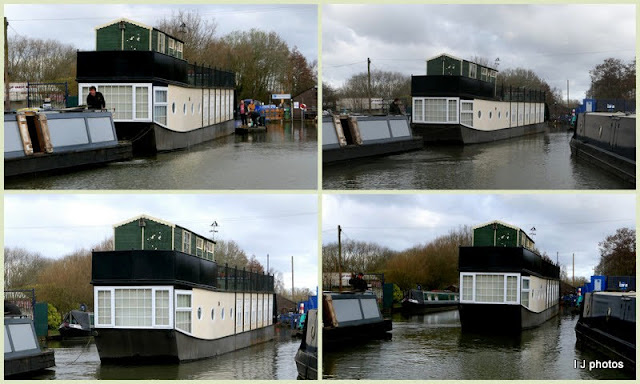 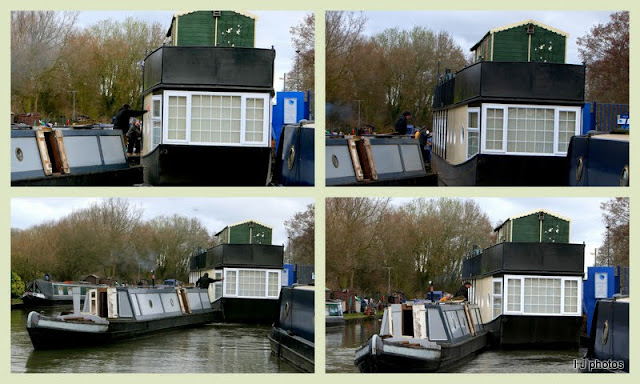 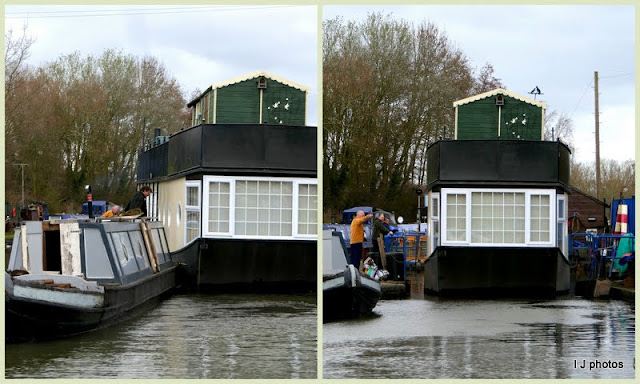 And an unusual visitor to the bird feeder. Apologise for the poor quality, took it through the cling film double glazing we placed over the window beginning of winter.

Posted by Ian and Irene Jameison at 5:00 pm No comments: