Milford sound and a tantalising glimpse of a Kea


We are in fear of being hounded out of the country by irate DOC Rangers, Apparently, BBQ Pommies are the dish of the week according to a comment left from Marilyn. This alone has sent us running for the hills. So to make sure we are not on their menu there will be no negativity on today's post heading but..... as for the blog, it seems the Jameisons are still having issues with excursions and we are starting to question "Why us!"

Before I relate the story, I will mention the positives.  Milford Sound, wow what a place to visit. For a change it was bathed in sunlight, (The mean annual rainfall is 6,813mm, and it rains there on average 182 days a year.) The nasty sandflies kept away and the scenery was to die for. Bruce our coach driver was brilliant, funny, told jokes, gave us quiz questions and kept up a running commentary throughout the journey. He even told us that Milford and Doubtful are not actually Sounds. They are in fact Fjords! This from Aurora Expeditions

A fjord is an underwater valley carved by glaciers. Generally narrow, with steep-sided mountains on either side, these U and V shaped valleys were carved by ancient rivers of ice which have since disappeared. Because these valleys are below sea level, they have been inundated with sea water, creating the fjords we see today.

Like a fjord, a sound is a valley that has been filled with sea water. However, a sound is usually formed by the flooding of a river valley, not a glacial valley. This means that the topography is usually less narrow and more gently sloping than a fjord, but it is no less spectacular.

The only true sound in New Zealand is actually in Marlborough.

To continue with our let down, We were picked up by Bruce (as mentioned) of Southern Discoveries at 8.15am. Not 15 minutes into the journey and he gets a phone call. Being the good driver he is, pulled over to take the call. The news was not good. Seems the boat we were booked on had broken down...really?.... not another breakdown to contend with! This was getting monotonous! What it did mean though, we now had to go on a much earlier boat, a larger vessel and not the small nature encounter boat we had booked specifically because of the independent travellers onboard, no tour groups and commentary by experienced English speaking guides only. The large vessel could take several coach loads of tourist and was more of a scenic cruise then the nature cruise. Most of the coaches arriving were full of Chinese tourists. With it being the two weeks of Chinese new year, (year of the Rat)  New Zealand seems to be the prefered destination for a mass getaway to celebrate this festive time. A full boat did not appeal to us at all!

And to top it all, with having to get an earlier boat, it meant we could not stop off to admire some of the points of interest stated in the brochure. To say all the passengers on the coach were miffed was an understatement. And before we entered Milford Conservation area the coach was stopped by the Police for a good ten minutes while the underside of the coach, as well as the wheels, were all examined. Goodness knows why unless it was something to do with harbouring unwanted pests or even drug smuggling. (or was it maybe that the DOC was trying to find us because they were waiting for their BBQ!) 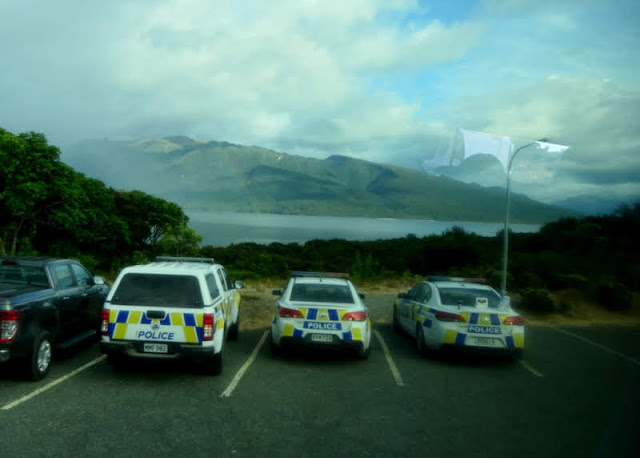 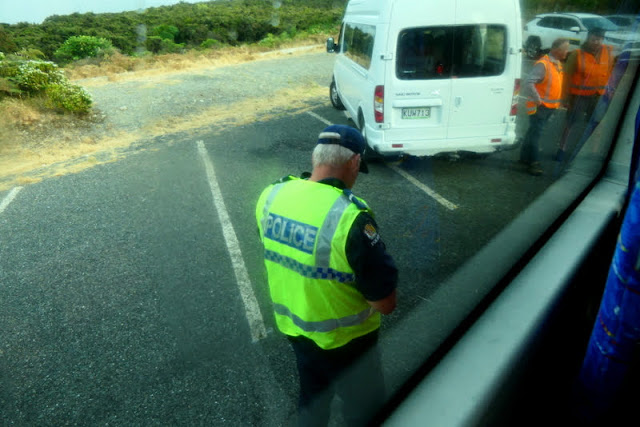 Bruce did manage to take in two of the stops, one at the Mirror Lake and the other a toilet break at Knobs Flat. 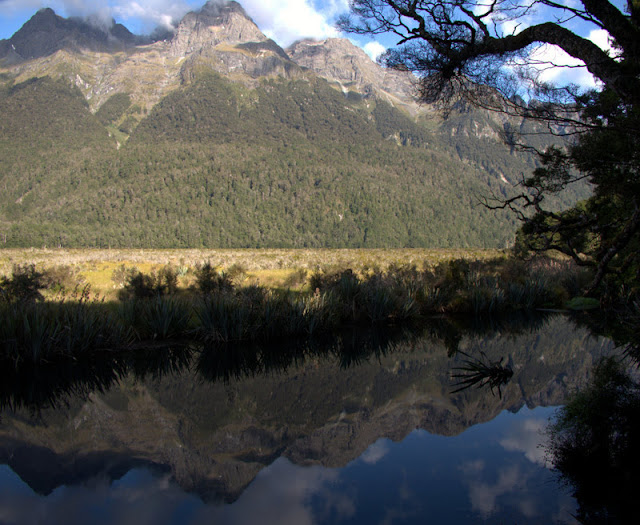 The journey to Milford had the most spectacular scenery. The camera was always pointed at something. 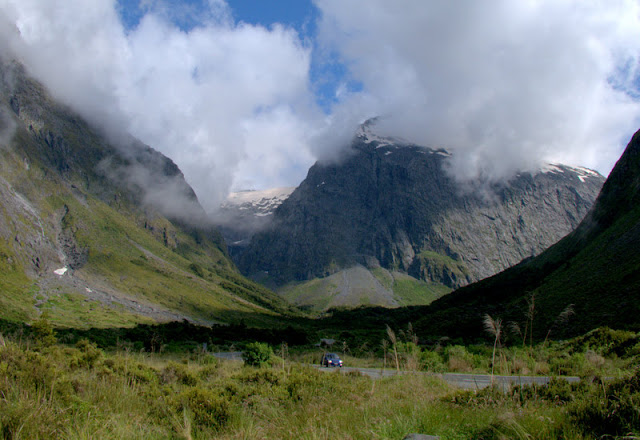 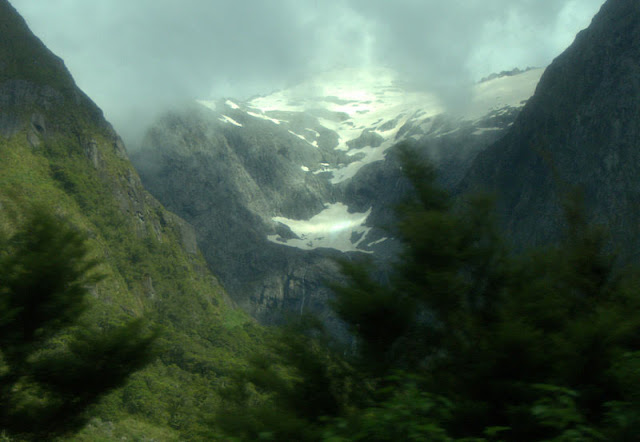 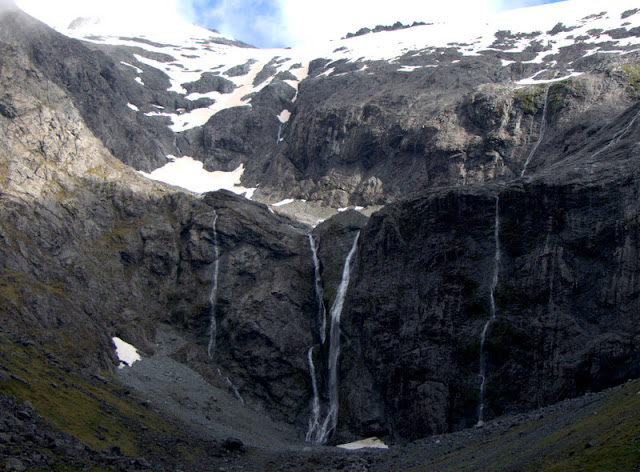 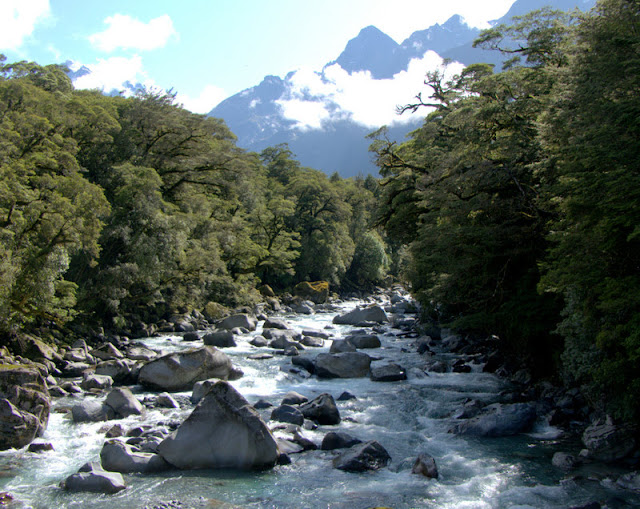 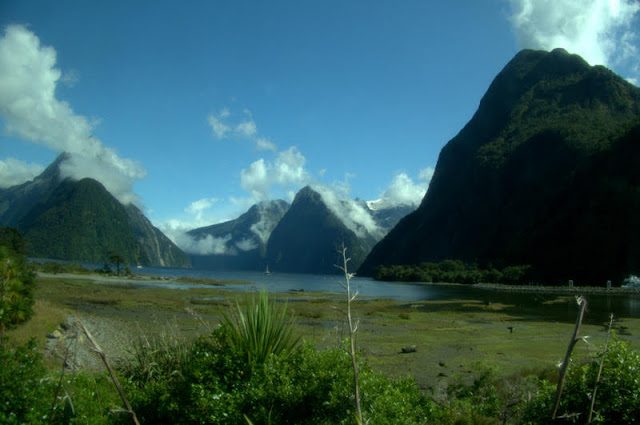 As soon as we arrived at Milford we were ushered to the boat. Us and the16 other people on our coach were last in a long queue of Chinese tourists and we resigned ourselves to taking what ever seating was left. But then one of the crew came to our group and escorted the lot of us to the VIP lounge on the upper enclosed lounge with luxurious seating and an outside viewing deck.. It didn't quite make up for the disappointment of not doing the nature cruise but all 18 of us appreciated the way Bruce from Southern Discoveries had managed to get us the VIP treatment.

One of the highlights of all the cruises in the brochure was taking the bow of the ship almost into the to the waterfall itself. Stand on the front deck at your peril. We did and boy did we get wet!


Sights on the cruise. 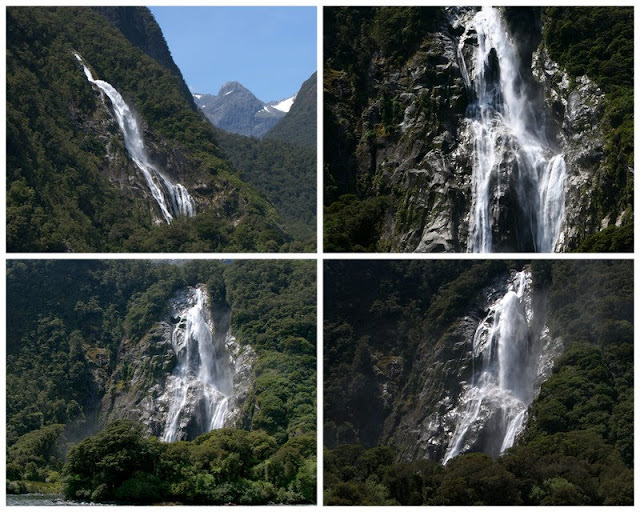 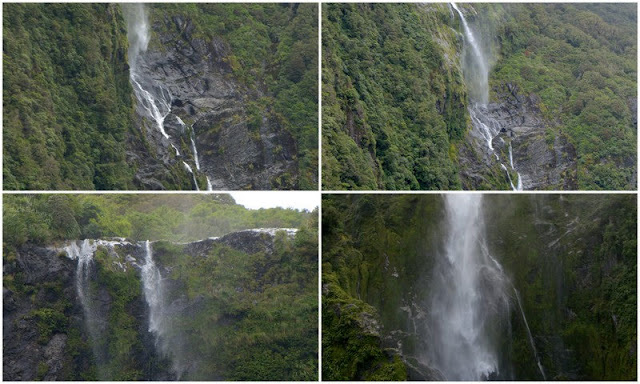 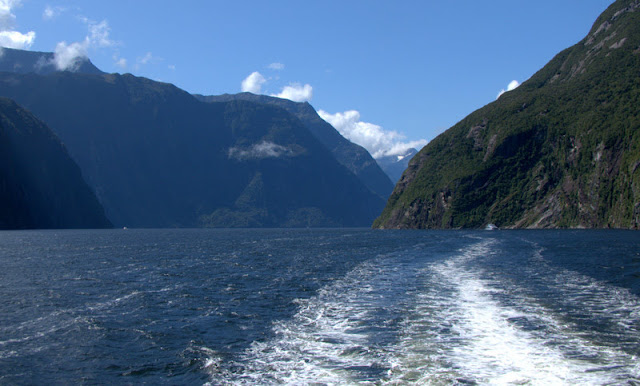 So in a way, the trip turned out okay and we did get to see the Seals. We even had longer at the underwater observatory and Bruce also managed to stop at some of the places missed when on the return trip to Te Anau. 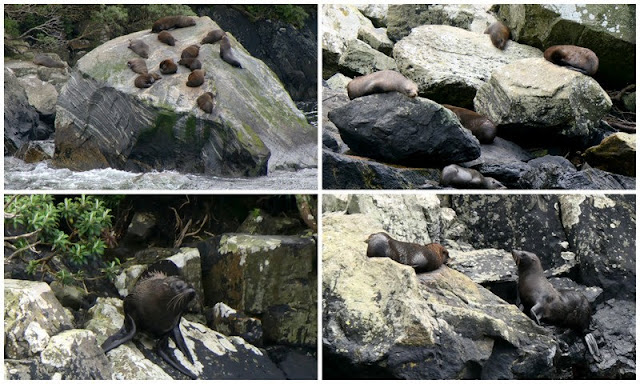 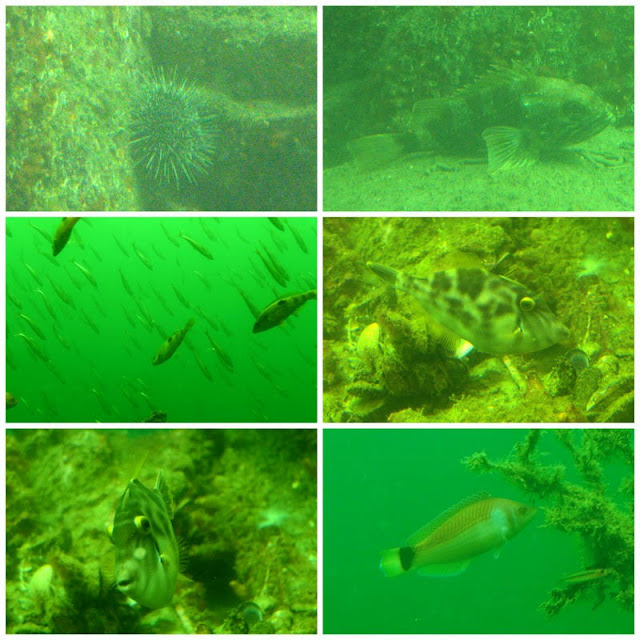 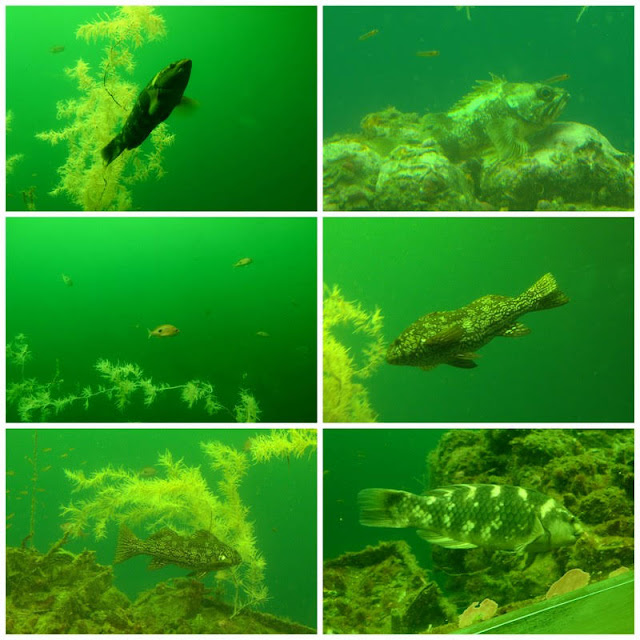 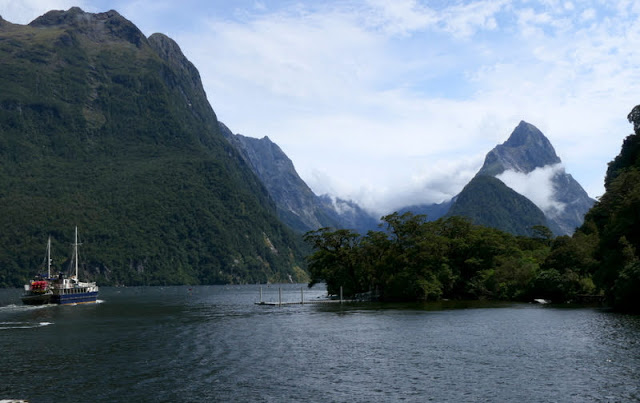 So the places Bruce stopped included Knobs Flat (toilet stop) Hollyford Valley Lookout, The Chasm where a short looped walk to see the waterfall could be done and I finally got to see a mere glimpse of a Kea and lastly the Te Anau Downs. 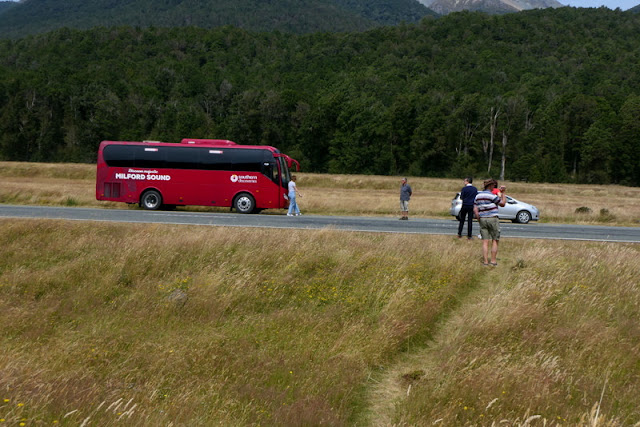 Posted by Ian and Irene Jameison at 4:00 pm No comments: Links to this post

Okay, so we got it wrong. Thought the journey to Te Anau would take much longer but in fact, having left before 9 am got there a shade after 10.30. The Top 10 holiday park would not allow us on site until after 2.pm so what to do for 3.5 hours. 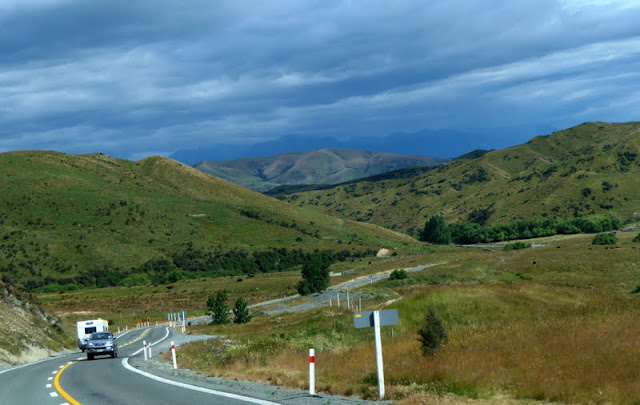 Te Anau is a town known as a gateway to Fiordland National Park and Milford Sound. Here can be found endangered, flightless Takahē birds and we were told by the lady in the i site of a small bird sanctuary not far from the town centre where this bird could be seen. 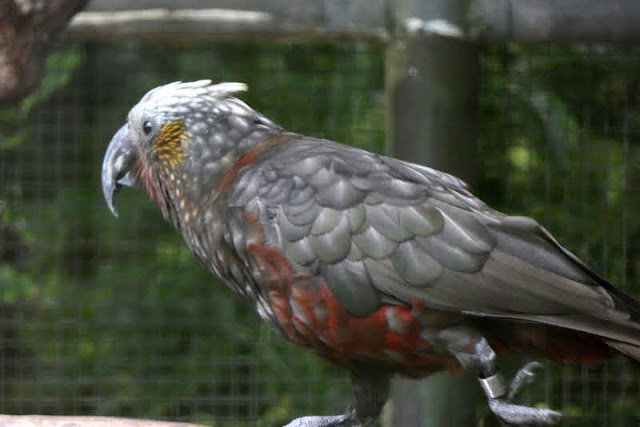 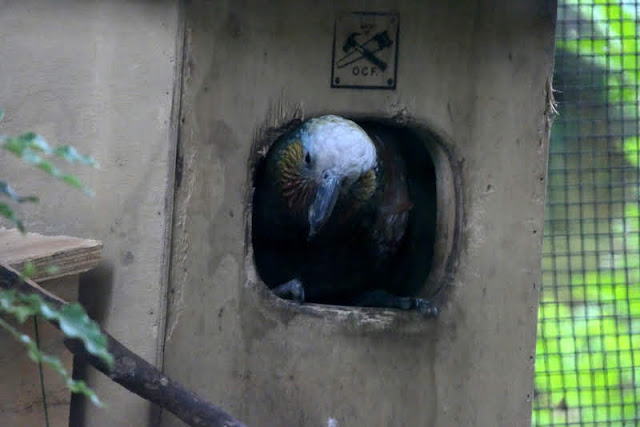 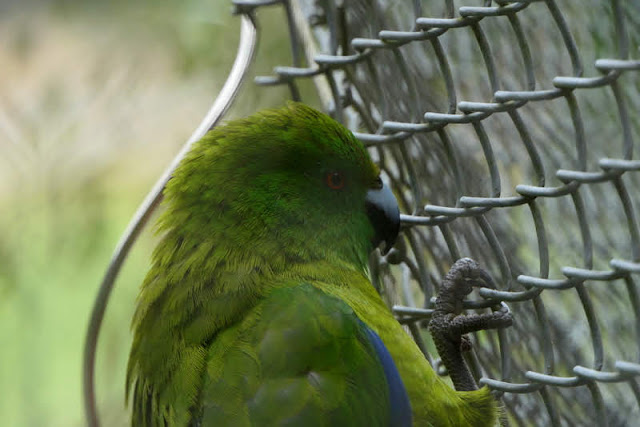 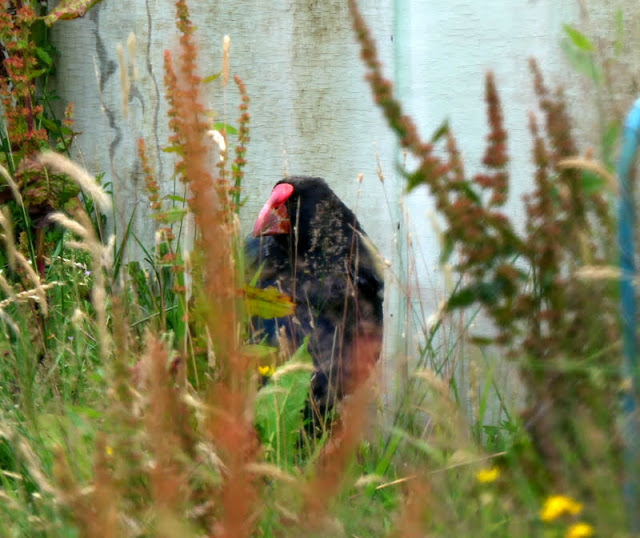 But before she let us go a suggestion was made to take a boat trip across Lake Anua with skipper Peter. A three hour trip to the hidden lake only accessible by boat and a short 20-minute walk through the bush. So more money handed over and by 1 pm, with another 6 adults and 4 children, we set sail.

Gosh, the lake was rough. We were the only two foolhardy people to sit on the front deck, and got buffeted by the wind and soaked by the spray. Neither of us had thought to bring waterproofs and, although I did have a shirt and long trousers to wear, Ian only had T.Shirt and shorts. Those people huddled inside must have thought we were totally mad. Well, I suppose they are right, we are English after all! It wasn't long before the skipper came down from the Bridge and advised us to go inside. "It's going to get a lot rougher than this" he stated. So in we came and was invited to join him on the bridge. 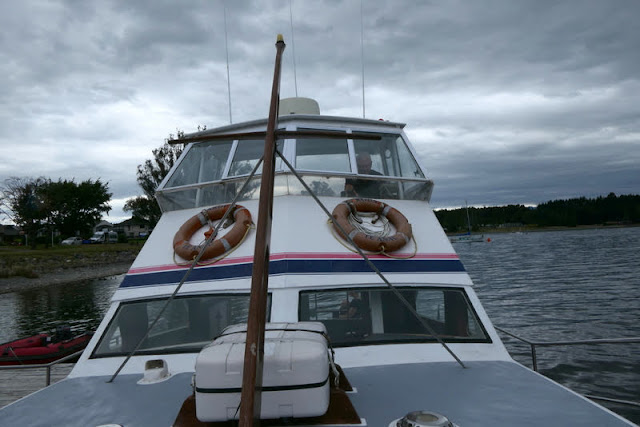 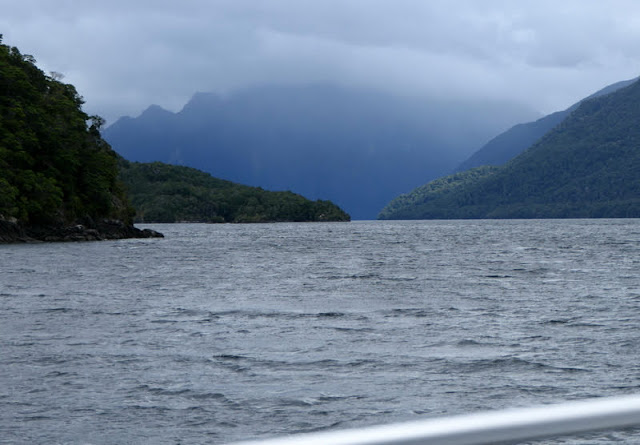 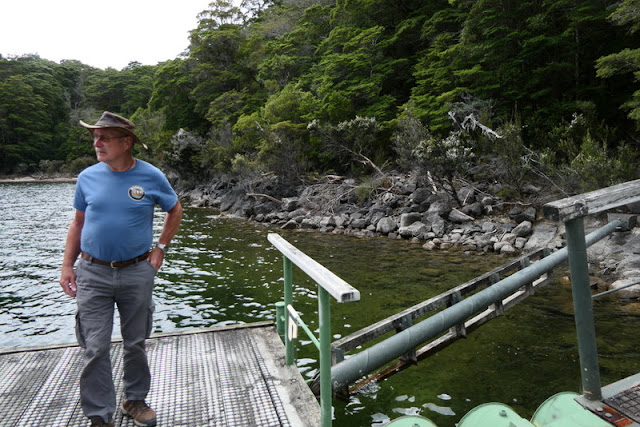 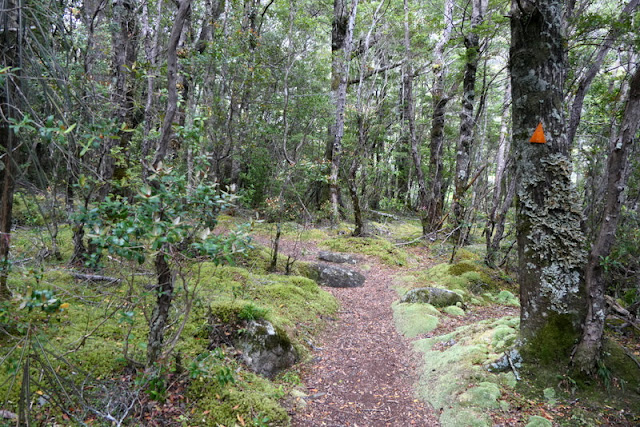 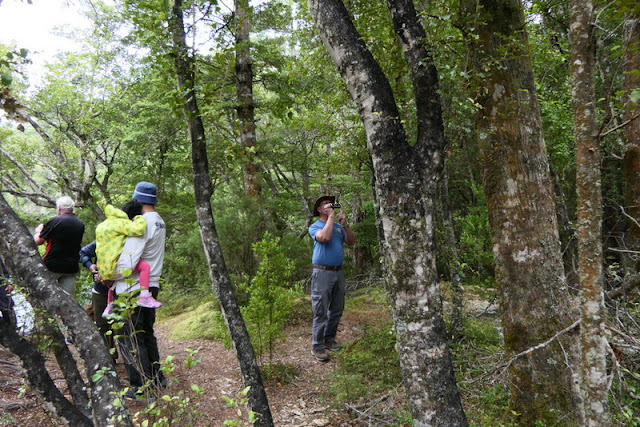 Peter stopped us by a fallen tree and asked if anyone had seen a Kiwi in the wild. Not one of us had. "Well today is your lucky day" he grinned. We all looked eagerly around and then he pointed to this branch. We couldn't be disappointed because it gave us such a laugh. 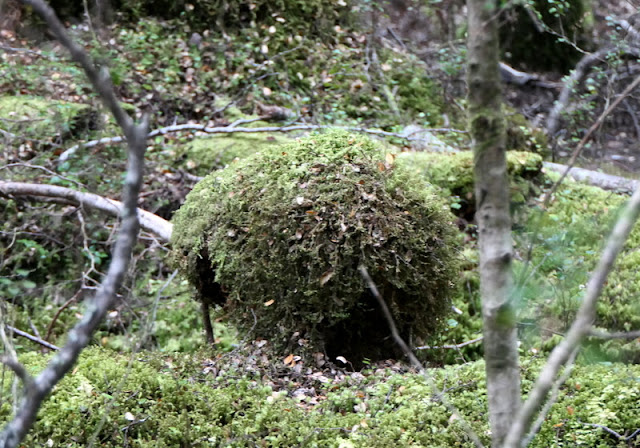 Back on land and straight round to the holiday site. First thing do washing and then showers. Good job we were early cos a large site like this only had 4 washing machines and 4 dryers and to add insult to injury only 3 washers and three dryers were working. By the time my wash had finished 3 more bods were waiting to use the machines, all the rest were in use.

Tomorrow we are off to Milford Sound. An 8.15am pick up right by the Top 10 reception. Soooo looking forward to that trip. Need to take the insect repellant. Apparently, the sandflies are relentless. 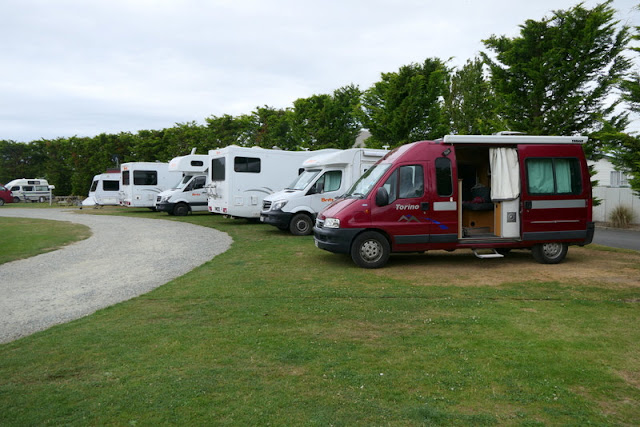 Posted by Ian and Irene Jameison at 9:09 am No comments: Links to this post