Most people  know how easy going and obliging we can be. So when Nb Isis turned up with his 70ft trad and tried to get into a 60ft space, we were all forgiving some helpful advice. His wife came out and said could we move back by a few feet. Unfortunately we couldn't because we were already over the sign saying 48hour stay. He then said 'you've plenty of space behind so move onto the bollard'. I then laughed and told him the bollard was there because it was a water point. He got right uppity and told me in no uncertain terms to 'stop laughing women'!!!! Well that got Ian and my back up immediately and told him to stuff it, we wouldn't give him the time of day. He then went to Dennis and Margaret on Nb Icing and demanded that they move back a few feet. Again the rings were in such a way that Dennis ropes would have been all wrong and Dennis told him he wouldn't move. This really got the guy angry and said that he had every right to get into that space. Dennis told him that he better chop some footage off his boat because no way was he going to get his boat to fit into there!! Anyway in the end he left in a right huff. It wasn't as if there were no spaces to be had. Beyond the marina entrance only one boat moored but this guy didn't want to go there. To be dictated to by a moron like that was not on!!. After the unnecessary upset we stayed long enough to water up and then set off to do the left turn onto the Oxford.


We traveled about a mile when we noticed another sunken boat. 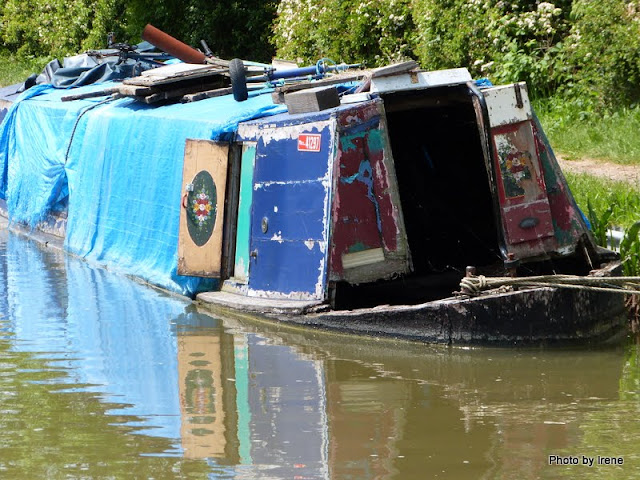 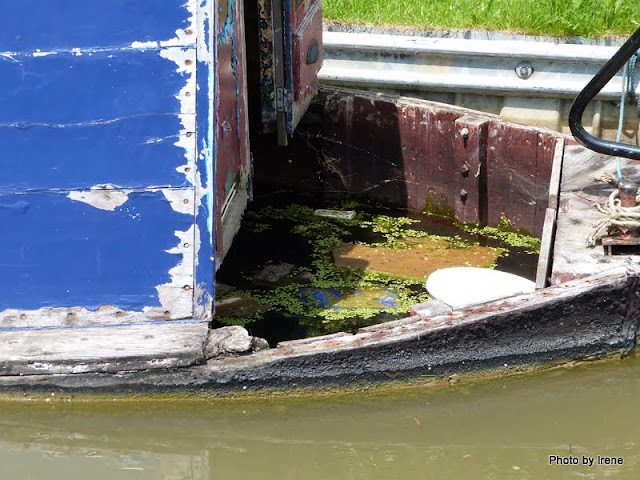 Dennis as lead boat found us a mooring on a lovely grassy stretch a couple of mile from Braunston junction just right for our first BBQ. Typically  as soon as we decide to cook outside the sky darkened and the rain threatened. We were lucky that the only shower we had was brief and Dennis and Ian, with pint in hand as usual, cooked the perfect chops and sausages. 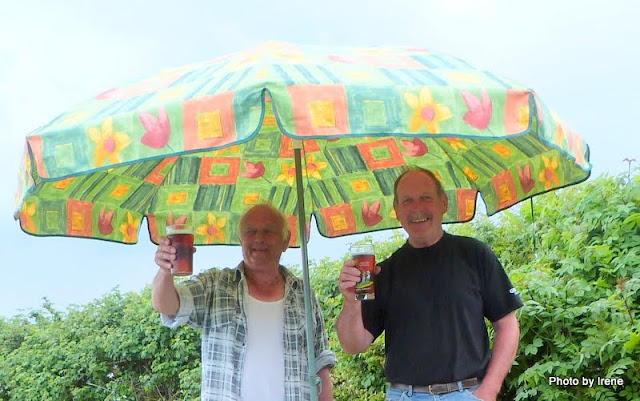 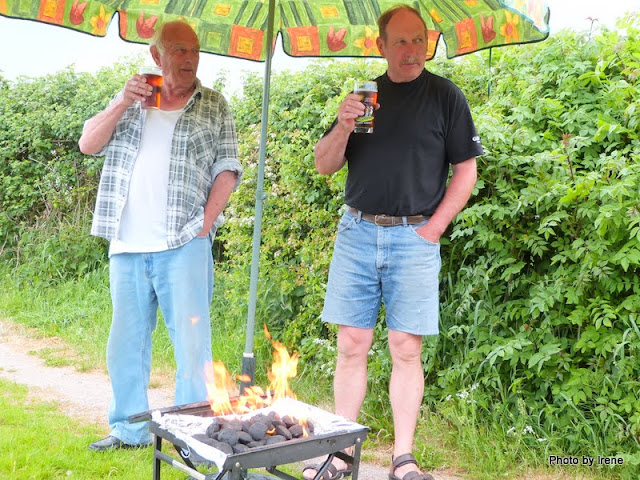 Tomorrow Dennis and Margaret will wind as their boat is having the roof painted and bottom blacked by the Wyvern boat company at Leighton Buzzard.


Had a phone call from our daughter Christine last night to tell us that she thought Josh, our 2yr 9mth old grandson,had fallen heavily against the bedroom door jumping of the bed, and thought that his arm might be  broken. Thankful Kevin was minutes away from arriving home from work and the pair rushed him to Burton A&E. Sure enough he had broken his radius and ulna bones cleanly and now had a plaster going from his hand to halfway between his shoulder. Poor love cant even use it to sit on the toilet seat as he usually holds on with both hands. I had visions of him disappearing  bum first down the toilet! 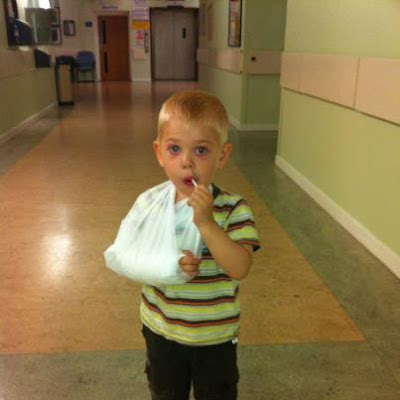 Leaving later then normal today we were unfortunate to be the 4th in the line of boats that happened to pass us earlier. The lead boat crept along on tick over. All we had to do was 2.5 miles to Napton Junction.This snail pace continued and 2 hours later  we arrived at the junction praying they would go straight  on and not do the turn. We groaned when they did turn right onto the Grand Union again. Thankfully at Calcut locks they stopped to water up and as boats were waiting to come up the flight we descended on our own for those 3 locks. We joined another boat at Stockton locks so I didn't feel quite so bad at not waiting for them to finish watering.


Ian did his good job for the day when a private boat owner tried to wind in what I can only describe as the smallest winding hole ever.  The length was okay but the width was no bigger then a widebeam. Due to lack of water he got himself well and truly stuck but with Ian pulling and the guy giving it plenty of revs,he eventually made it round. 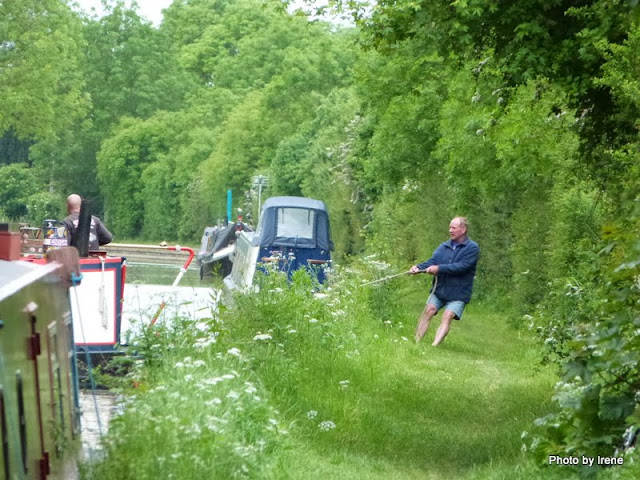 Then just before Stockton locks at the Kate boat yard another boat got stuck by misjudging the entrance.This time they were rescued by someone in the yard so all we had to do was hang back till they sorted themselves out. 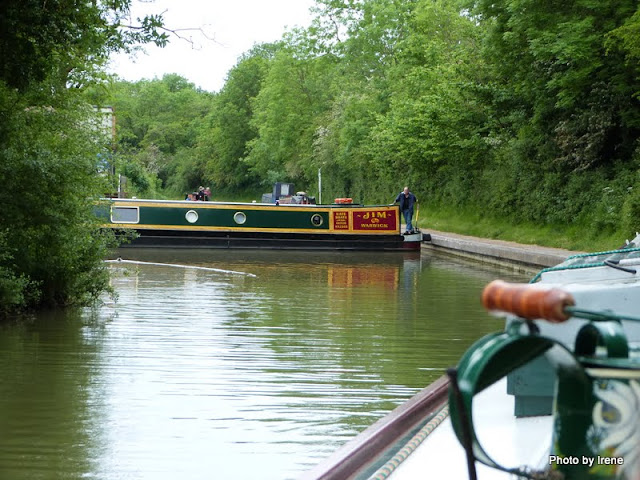 The Internet  at Braunston and here in Long Itchington was rubbish so to write this I,m having to sit in the Two Boat pub and drink wine just so I can use their free Wi Fi. What a shame!!! :) Thank goodness for Internet pubs otherwise another night would have passed before I could write some more of my ramblings.
Posted by Ian and Irene Jameison at 8:23 pm 4 comments:


There is something good to be said for having restriction times on the locks at Long Buckby and Braunston.  For the first time we got through Braunston tunnel without meeting another boat. It always seemed to happen just when we get to the bendy bit and 9 times out of 10 we would end up hitting each other. No ones fault really just the tunnel builders all those millions of years ago. (Must have had a drunk surveyor)

We set of just before 8.30am and made the top of Braunston flight just after 9. Only one boat was already waiting so we paired up and as luck would have it at every lock boats were already coming up. Apparently it was manic at Braunston bottom, with at least 6 paired boats waiting to ascend. I expect Crick was to blame for the amount of boat traffic and boy was I glad that we were going away from it. Dennis and Margaret on Nb Icing helped us through the flight. We got a text message yesterday to say they were at Braunston and Ian in his infinite wisdom text back to say we would be at the top of the flight by about 3pm.Well I knew there was no way we were going to get up Buckby flight and be at Braunston for 3pm let alone 5pm when they shut . They waited for 2 hours at the top fully expecting us to come through the tunnel at any moment, only giving up all hope when the lock keepers padlocked the gates. This morning they were already at the top waiting for us and did they give us an ear full!!!! I pointed the finger solely at Ian and he actually admited he got it wrong. Its a shame Margaret didnt give us a ring yesterday to see where we were  but all ended well when we enjoyed a good meal and a pint at the Boathouse Inn later in the day. Going down the flight was a doddle. The other boat was a canaltime and the hirer had never been boating before. Okay he got it wrong more often then not but you know what, we also messed up when we first started boating. All in all he did a pretty decent job only hitting me twice.


We are not sure what we are going to do tomorrow. Dennis and Margaret are staying for a few days so the decision will be made tonight whether we stay with them or set of on our travels again.

Posted by Ian and Irene Jameison at 6:46 pm 1 comment:

We started the morning by washing all the limescale from the roof after our very wetr journey through the tunnel. Then it was off to cruise a few miles to Nether Heyford to stock up with provisions and more important my fishing bait. Then the long cruise to Long Buckby bottom lock. Had a near miss at one of the bridges when a stupid idiot in a cruiser tried coming through with me. Both of us reversed hard but whereas our boat stopped in a straight line he lost control and ended up broadside across the bridge. He apologised for his lack of control but if he had slowed down when he saw me it would never had happened! 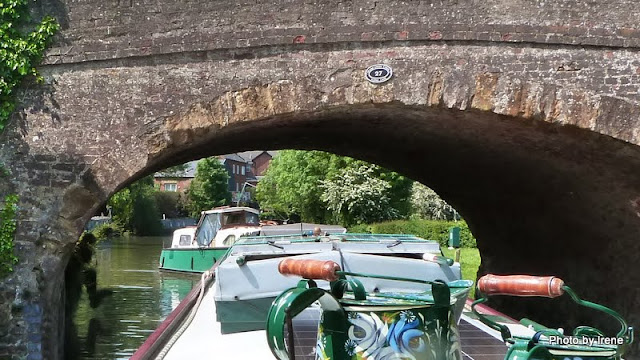 We were again fortunate to meet up with another boat. The pair are heading for Crick to help set up and you couldn't meet a nicer couple. Boat is Nb Ultreya owned by Chris and Diana from the BCF ( boaters christian fellowship) The shop by lock 8 Anchor cottage run by Tricia Dawson had a very inviting sign outside, ice creams for sale, so while the lock was filling, Ian and Chris went  to fetch the ice creams. BW were doing a spot of lock maintenance and had the lock set for us. The volunteer lock keepers were also on making sure everything worked like clockwork and we got through the flight in no time at all.

The time when we reached the top was 3.30 and I thought the lock would be padlocked after we got through but apparently the restrictions have been lifted somewhat so last boat through is now 3.30. After the usual watering up ,empting loo and getting rid of rubbish we turned left at the junction toward Braunston and are now nicely moored up by a shady tree. Hope the weather forecast is wrong and we don't get a thunderstorm tonight. Jade will be her normal quivering wreck again!!!
Had a big drama after we were moored. If you would like to see what it was please go to dramatic rescue
Posted by Ian and Irene Jameison at 9:58 pm No comments:

What a dramatic climax to an otherwise perfect day. We are now moored at Long Buckby heading towards Braunston. First thing I did, other then check the telly, was get the rod out. I found a tackle shop at Nether Heyford and stocked up with maggot and got myself nicely settled  to a good evening fishing. Suddenly I became aware of a  commotion coming from the field opposite. I'm going to let my photos tell the tale. 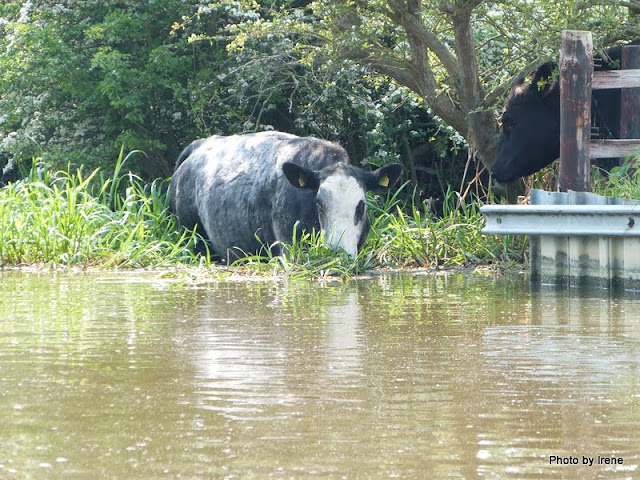 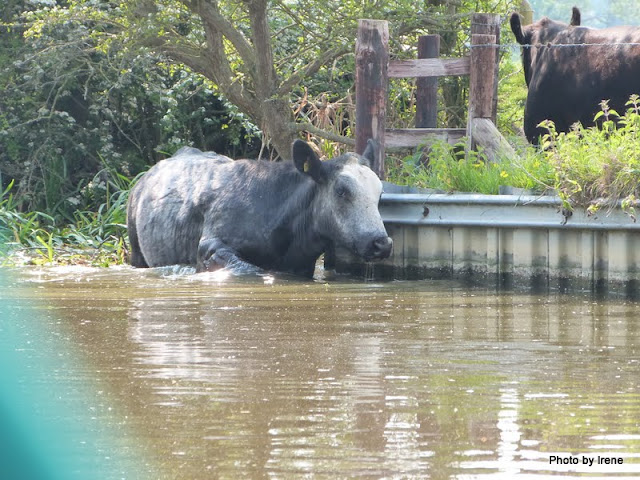 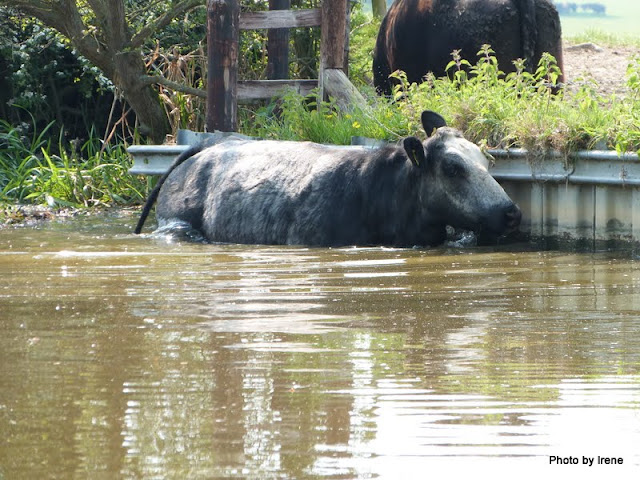 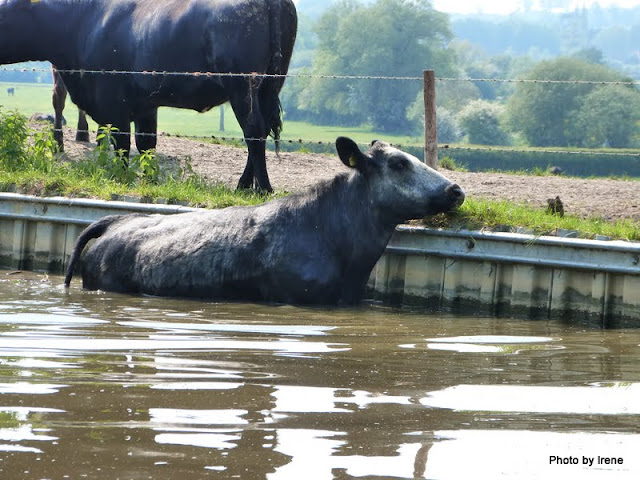 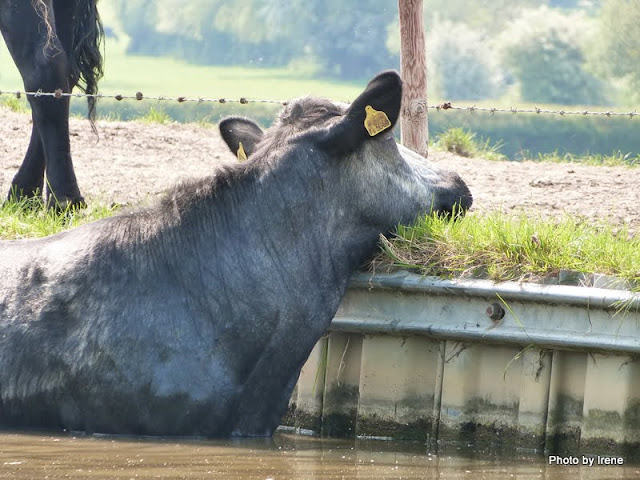 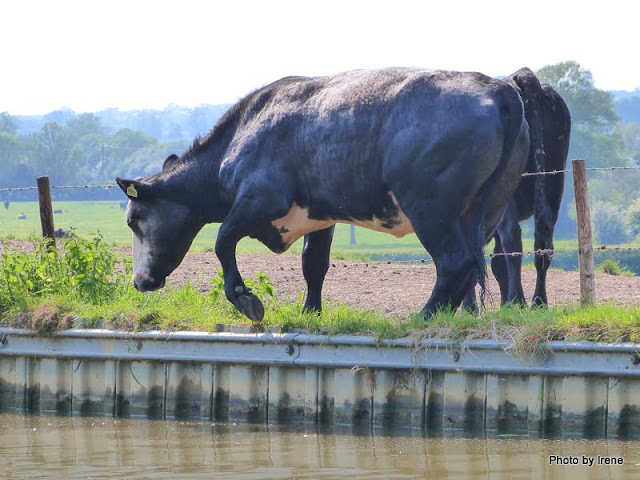 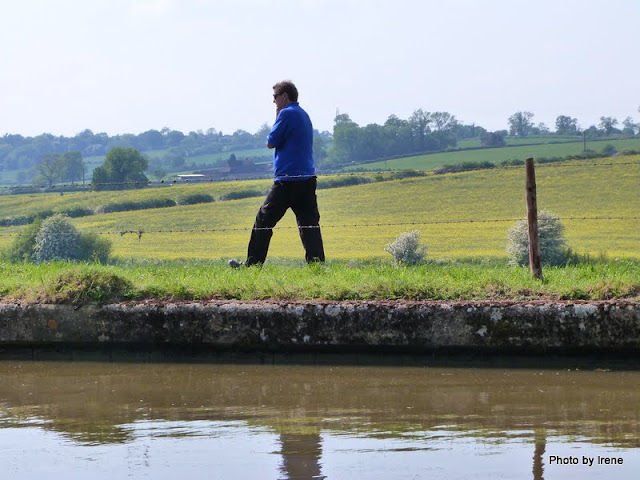 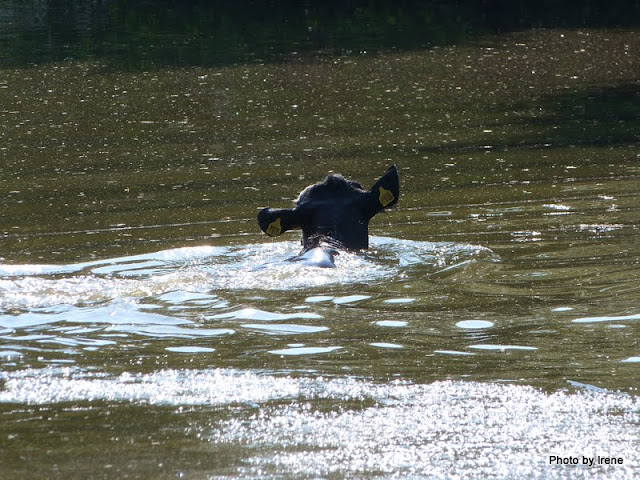 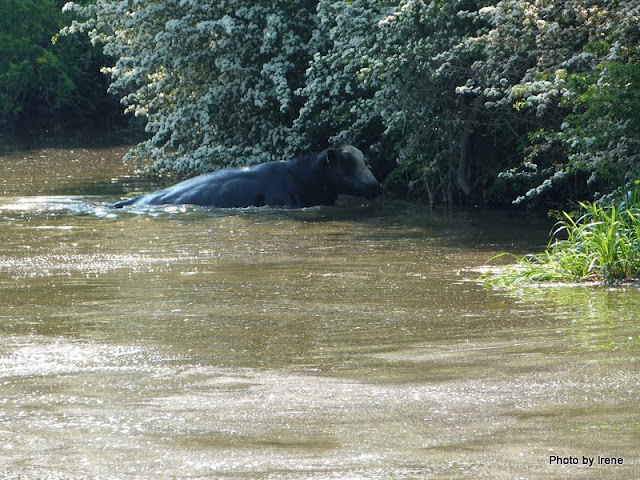 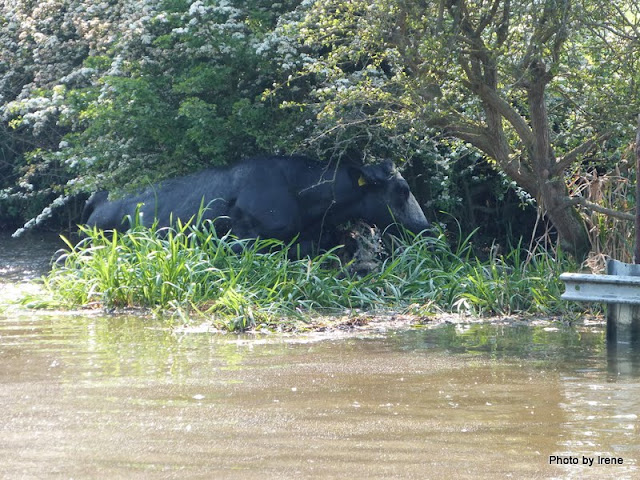 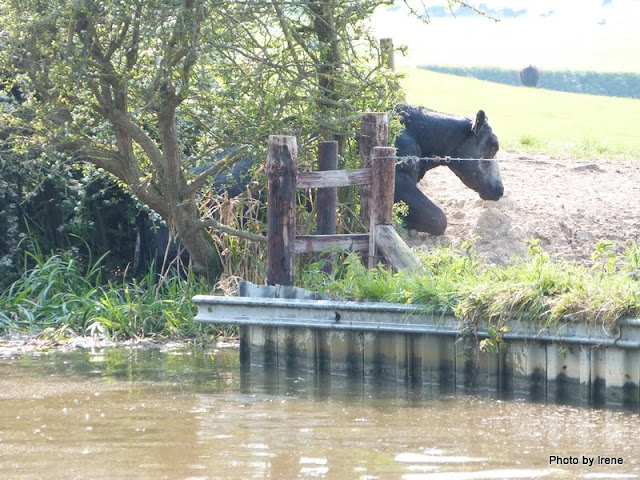 Posted by Ian and Irene Jameison at 6:24 pm 2 comments: