I don't think I can name any other type of travellers ( after all that is what we are) that are as friendly and helpful as the boater community. The two boats we have nestled between have both offered to look after our boat while we are in Poland for a week. The initial plan to take the boat to a AWC club nearby, had to be abandoned when we found they had no electric hook up on site. My fridge and freezer need to stay on during our stay away as I have to much frozen stuff to use up beforehand. This caused us a bit of a dilemma as to where we would leave the boat. Ian found Pear Tree marina on the website last night which could be an option. Chatting to Paul on Nb Kestrel later in the evening, Ian explained our dilemma. With no hesitation he offered to, not only keep an eye on the boat, but if necessary run the engine for a couple of hours every day. I mean who else would offer to do that. Then along came Jill on Nb Windrifter, moored in front of us, who said exactly the same thing. Both have long term moorings here, agreed by BW, and although both couples seem genuine and very nice, we are reluctant to leave them our boat keys as we have only just met. In the end the decision was made by our son. Why we didn't think of it before is beyond me, but its obvious. Leave all the frozen food stuff with him in his freezer, then we can turn everything off, leave our boater neighbours to keep an eye on the boat, which means no one will need to have the keys. Problem solved..

Today we have finally been able to do some work at Colin's. As the rain has continued all day, hoping to start on the garden has been put on hold. Instead loads of bits needed finishing, skirting, wallpapering, painting etc, so for the time being there is plenty to keep both of us occupied. The weather forecast still looks unsettled for this region and as much as Iwona would have loved to come back from Poland with part of the garden finished it's not to be. The shed has gone though revealing all the wood still to be cut up by ourselves and taken back to our bungalow. Another task that will have to wait for drier conditions. 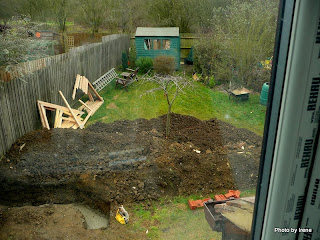 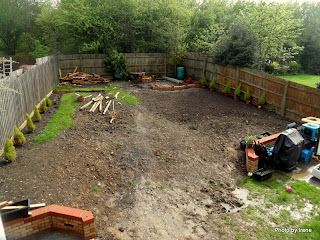 Posted by Ian and Irene Jameison at 7:47 pm