I know, I know! I keep harping on about the weather, but for goodness sake, its nearly May and sooo very cold. Winter has us still very much in it's grip. Today we had everything thrown at us, rain, sleet, snow and strong icy winds that went right through you. Got very chilled during our 4 hours cruise. (that's a lot for us!) Took all day mind, because a 30 minute stop at Aldi above Chemistry lock for a shop and then an hours stop when the sleet and snow got so bad it was beyond a joke, then having to turn all the locks which took forever even though we did have a locking buddy today. Met him at the Aldi mooring and he said he would wait. (such a nice couple) And what of the mile and half of moored boats. That took us 36 minutes today. We did have to go slightly faster at 950 rpm because of the wind (850 is normal for us passing boats), it knocked 3 minutes off of the time. Although we didn't moor until 3ish this afternoon having left around 9ish this morning, it seemed like a long, cold and horrible day. Couldn't get warm even after cranking the stove up and throwing loads of wood on. Resorted to wearing my thick socks, calf length fluffy slippers and extra jumper. No doubt later tonight I will be too hot and have to strip off. Poor Ian is already sweating cobs because he never feels the cold! Anyway we are moored by bridge 109 on the visitor mooring by the Shady Oak, being buffeted by the wind and the manic boaters (two trip boats, 1 hire boat and a privately owned) tearing past that made no attempt to slow down! (No excuse because the wind is blowing straight down the canal and not on the side so the revs do not need to be that high!)

An unusual bird seen on the towpath. 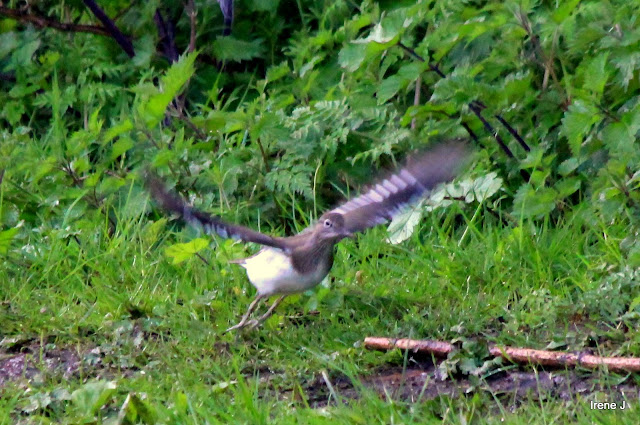 At one of the top locks in Chester a pigeon made it's nest in the lock beam. 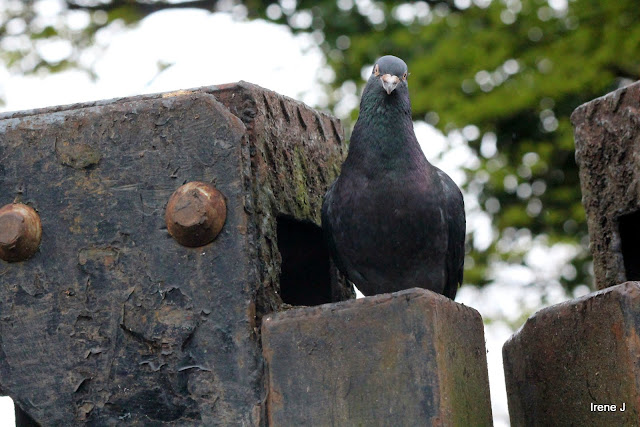 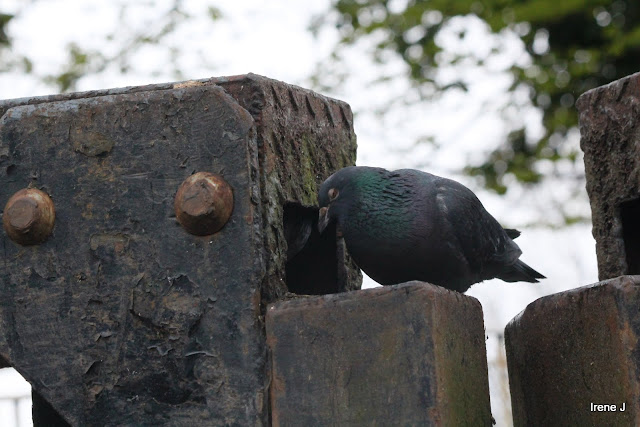 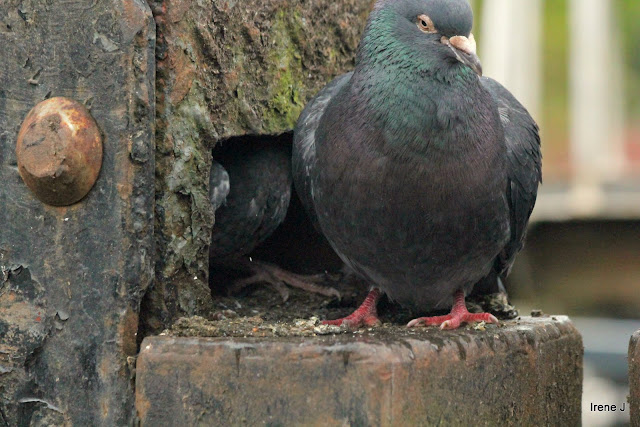 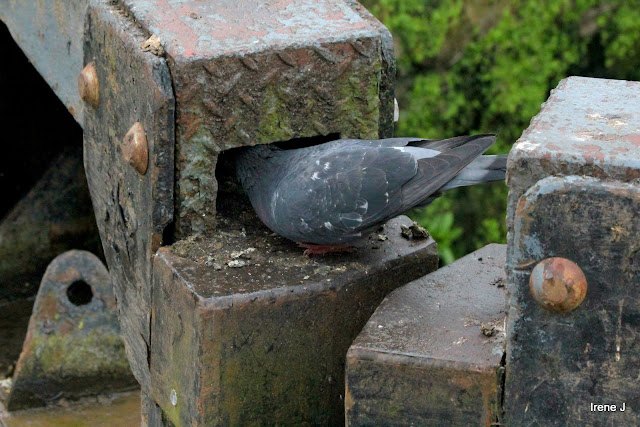 And passing Tattenhall, Swans making their way toward the Marina 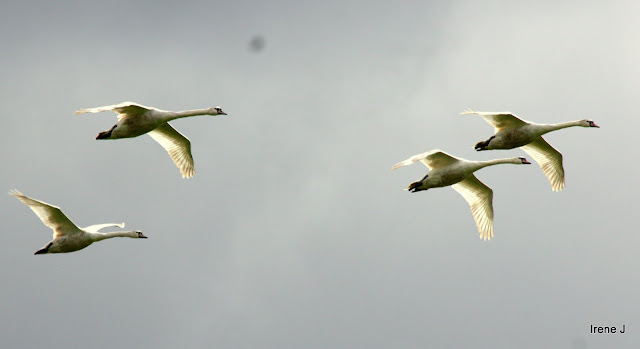 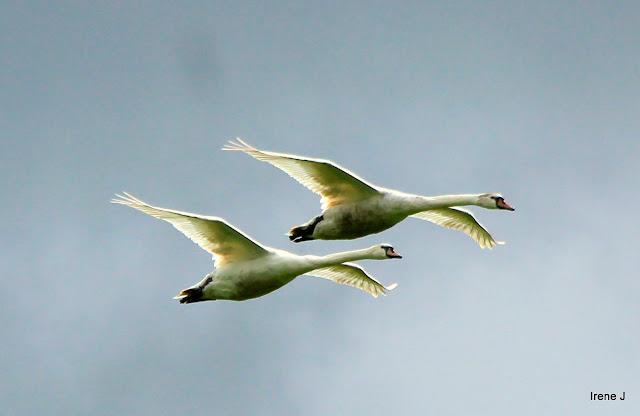 Posted by Ian and Irene Jameison at 5:50 pm 1 comment:

A Halo round the sun and a surprise meeting

Amazing who one meets when not expecting it. Having set off fairly early (before 9am) it was only a 40 minute cruise back to Chester. Once again we stopped at the facilities and as Ian walked back to FS, empty cassette in hand, I heard him shout "Wally"? "Never" thought I "Cant be Wally and Sue from our part of the world, the Erewash Canal"! It was though. How uncanny to meet in Chester and neither of us knew the other was coming. Sue and Wally used to hold the most amazing New Year Eve parties and with their house right by the canal, mooring ours and other ECP&DA members boats was never a problem. Meant we could all have a decent drink and see the New Year in style. So we were both surprised and delighted to see them both in Chester, not having any idea that they were going cruising this year. We moved off the water point to breast up with Nb Midnight Special and then tea and biscuits appeared and a good 'ole chin-wag followed. Strange how one meets up with friends when one least expects it.

Once on our way we followed 2 boats going up the staircase locks. This actually was a benefit to us because it meant Ian didn't have to fill the middle and top chambers before I could ascend. With them now being full and with the help of a lock keeper it only took half the time for FS to rise up instead of the hour coming down. It also rained again so once more both of us got soaked.


Before the heavens opened the sun made an appearance. A spectacular halo surrounded the sun  a sure sign of ice crystals around the thin cirrus clouds drifting 20,000 feet or more above our heads.(found this out on the web) 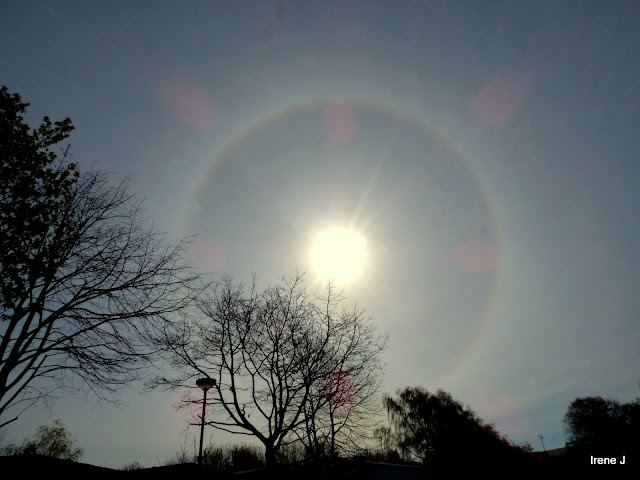 Not long after we stopped in Chester the rain became torrential. Ian was sorting out the aerial when a lady rushed up to him and asked if we were a trip boat. She was most disappointed when we he said no. Think she was hoping for a bit of shelter and I cant say I blame her. Even the ducks stopped chasing one another and bobbed up and down looking miserable.

Once the rain stopped we went for a short walk. Didn't get far because down came that rain again and we high tailed it back to the boat. Managed this photo before it started and shows us moored just below the wall. I must just say that we have spent 3 days in Chester, two days near the centre and one by the wall. Every night has been quiet and even though we had 4 youths sitting on the bench by FS last night until well after 10.30pm, never once did we feel uneasy.  For a city this is a great place to stop and visit. 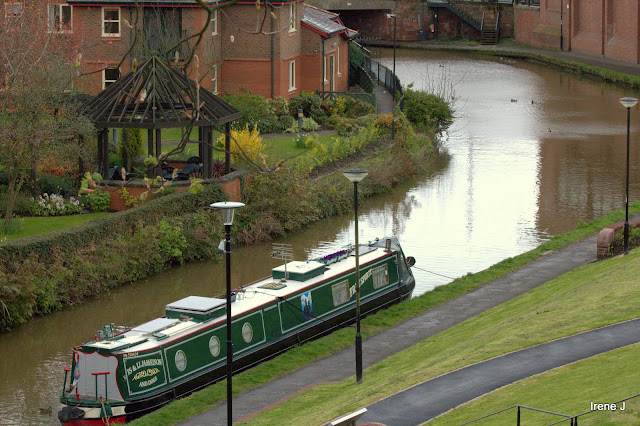 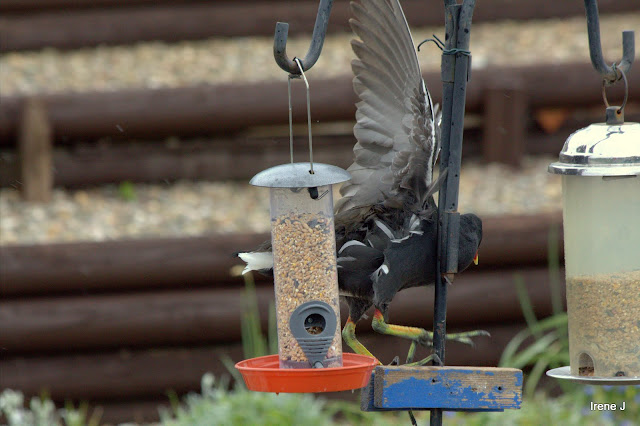 Posted by Ian and Irene Jameison at 5:55 pm No comments:

Ellesmere Port Waterways Museum and not that fisherman again!

We made it to Ellesmere Port after a 90 minute cruise. The start of the day was glorious and the sun streaming through the curtains got us both up early so we pulled pins around 8.30am. The day was  sunny but warm it was not. If only that icy wind would drop the day would have been very pleasant. Seems odd to be wrapped up in winter woollies and it being nearly May.


On arrival at the Port not a single mooring free. All we could do was wind and then head out beyond the bridge to stop. An offside mooring with picnic tables seemed a good enough place but we had difficulty in getting right into the side. Had a couple of feet to jump to land on terra firma but with Ian's helping hand landed safely. 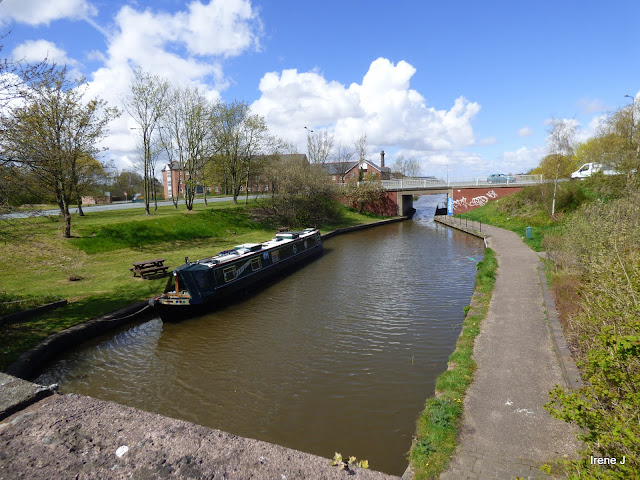 A very reasonable price of £5.40 for concessions got us into the Waterways Museum and with plenty of things to see, we thought it good value for money. The historic boats were a sad sight, many lying in rows forlorn but not forgotten partly submerged in the water. Whether they will ever be restored all depends on funding. One boat that had been restored was Ilkeston and we were able to view the cabin interior. The 4 Porters cottages taking you through the ages from the 1920's to 1950's, with the changing interiors as the decades passed, brought back some nostalgic memories. Plenty of exhibits to view and we spent a good 3 hours wondering round. 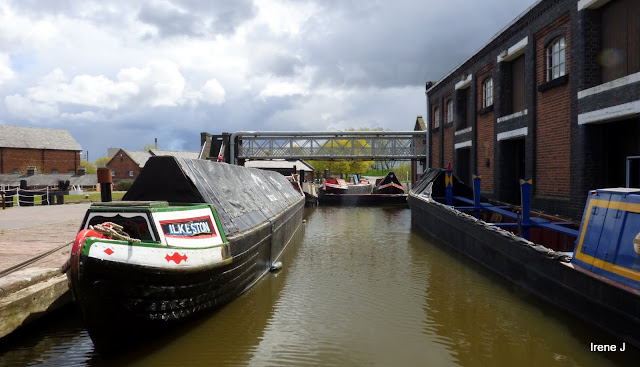 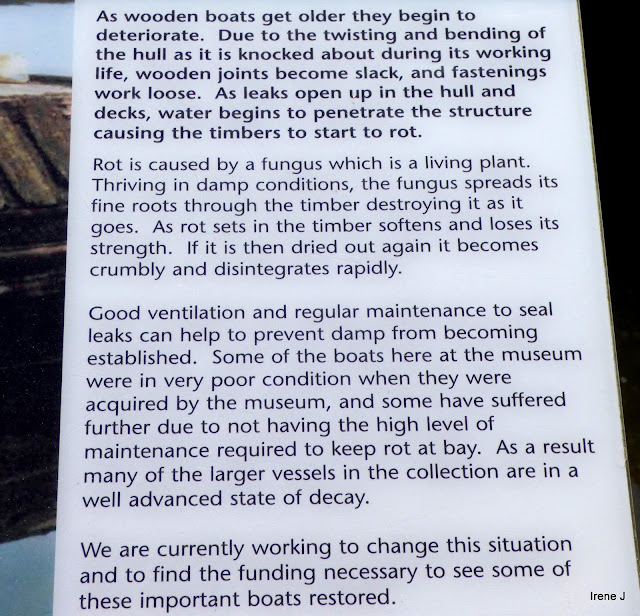 A very important historic boat in the process of being conserved was the Mossdale, an old wooden Mersey Flat. 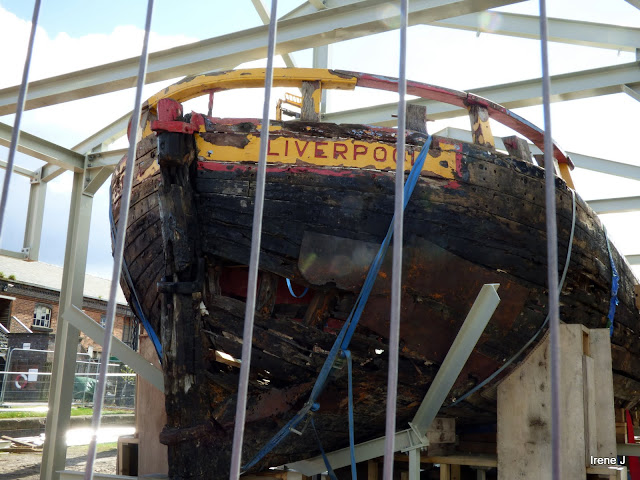 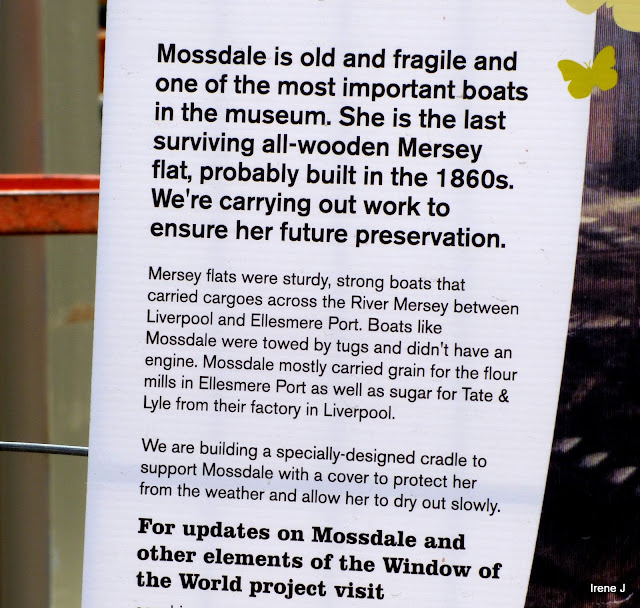 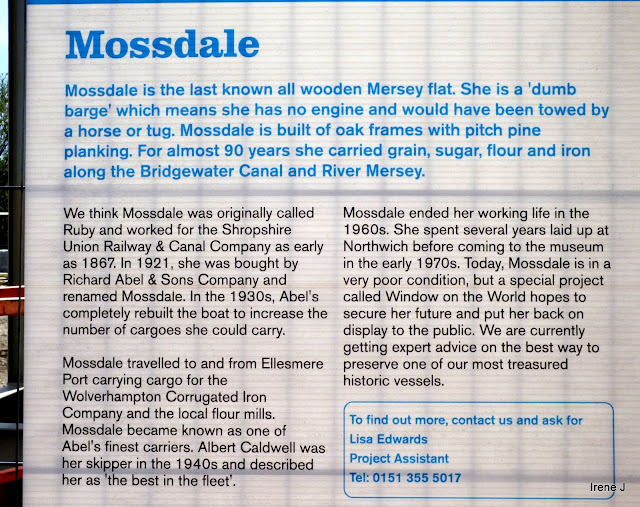 We would have stayed overnight but didn't fancy being outside the museum boundary. Not knowing what the area was like we decided leaving for a rural mooring the best plan of action. So we upped and a-wayed to moor back at bridge 131. On route we saw our nasty Old Git fisherman again. Think he must have taken root as he was back in the same place as yesterday. This time we coasted past not wanting to have abuse hurled at us again. I made a concrete effort to engage him in conversation by saying hello and mentioning the weather. Not a word or a glance came our way just a shake of his head. Oh well some people just like to be grumpy.

And more photos of the museum, 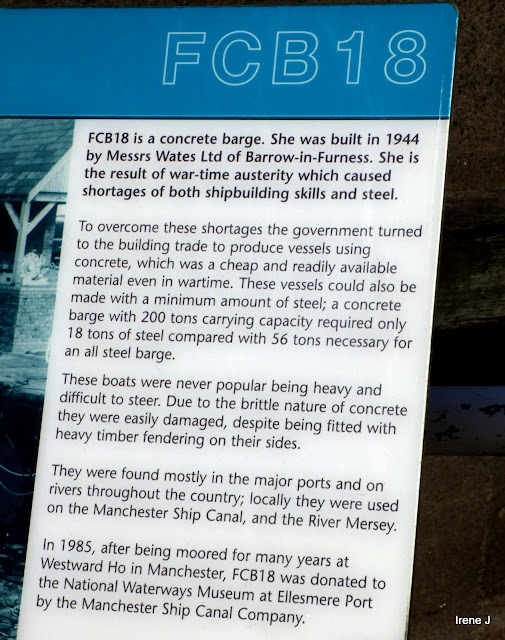 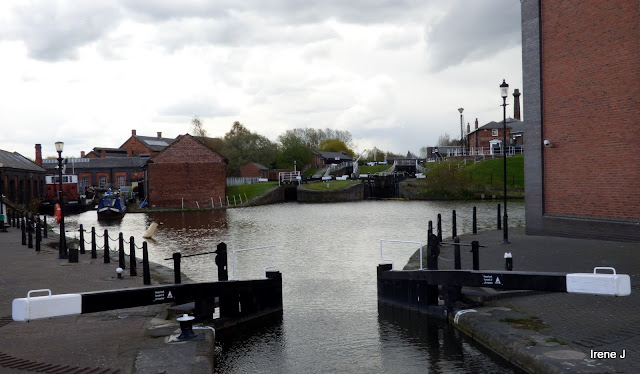 Below is Friendship an unconverted horse drawn boat, built in 1925 by Sephtons of Sutton, Coventry, for Joe and Rose Skinner who lived and worked on her until 1959. They mainly carried coal from the East Midlands to destinations on the Oxford Canal; for about twenty years to the Morris radiator works at Oxford; and then until their retirement to the Dairy at Banbury. Joe was a lover of animals and was not interested in having his boat motorised. She has been on display in the Boat Museum at Ellesmere Port since 1981, where she is under cover with one side opened for display.

Exert taken form the the history of Friendship An interesting article about the pair is on the 'Canal Junction' Friendship remembered and well worth a read. 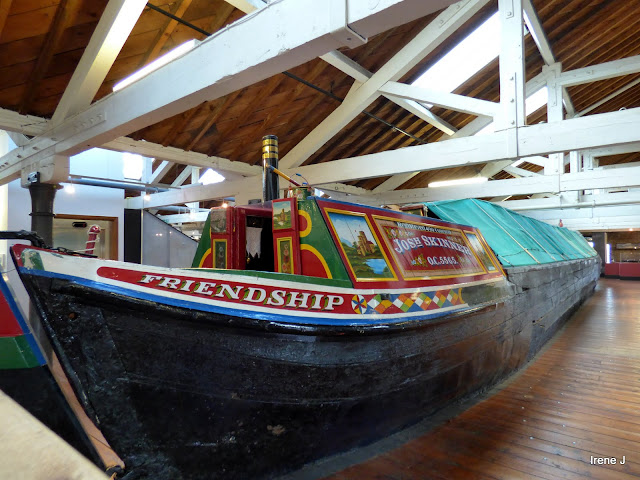 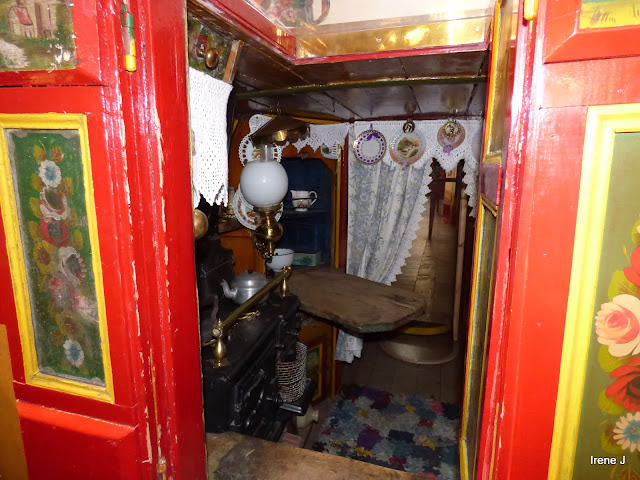 Posted by Ian and Irene Jameison at 5:27 pm 2 comments:

Grumpy Old Git!!! and a trip to the Zoo

Well..... I must say, there we were minding our own business and enjoying the short cruise from  bridge 131 to 134 when I spies a fisherman in the distance. So doing the decent thing I slows right down. A cheery good morning to him didn't even warrant a stare let alone a reply. 'Please yourself' I thought. Then, having got at least 10 feet away from him, I turns the revs up slightly.  OMG....I thought World War One had started!!! He rants and raves about how I speeded up the boat exactly where he was fishing and bl**dy boats shouldn't be on the canals causing mayhem and frightening the fish and didn't I know how to slow down etc etc. I looked at Ian flabbergasted! For a second or two I was lost for words then I gave him as good as he gave me, 'The canals were built for boats you know not for obnoxious fishermen like you. If it wasn't for us using the waterways then you wouldn't be able to fish 'cos this would be a ditch!!! That didn't go down well at all and the ranting started again. By now I was far enough away not to hear much more of what he was saying but then I started to worry. We were mooring after the next bridge, within eyesight of this nasty man. Would he retaliate and do something to the boat? We could only hope not. Anyway enough said about this grumpy old git. I know for a fact that the majority of fishermen are a friendly lot usually giving a friendly smile and nearly always remarking on the weather. So keeping fingers crossed we moored up and walked the 1/2 mile to Chester Zoo.

It was blooming cold for an April day. That wind was not nice and I'm sure the animals decided they were better off inside. Anyway we had a super day, spending 6 hours wandering around the 110 acre site and the only bit of anxiety I had was when we were due to walk back to FS to see if that Old Git had done anything to the boat. Would you believe we nearly met him again by the bridge, he was bringing the massive amount of unnecessary fishing gear (my opinion alone) back to his car. And what of FS??? She was just fine, with not a mark on her.

And some of the many animals and birds I photographed today. 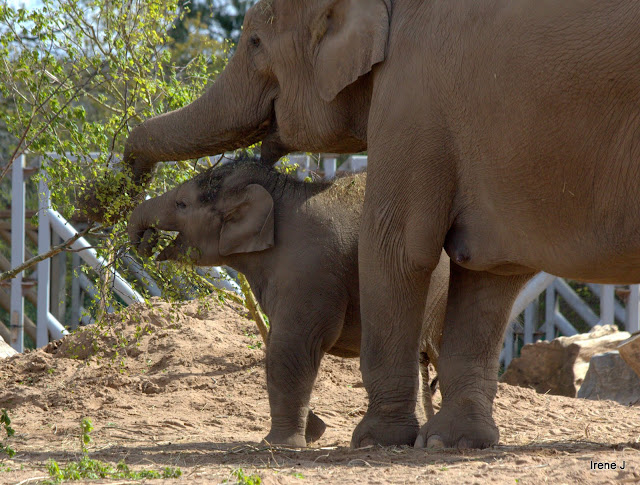 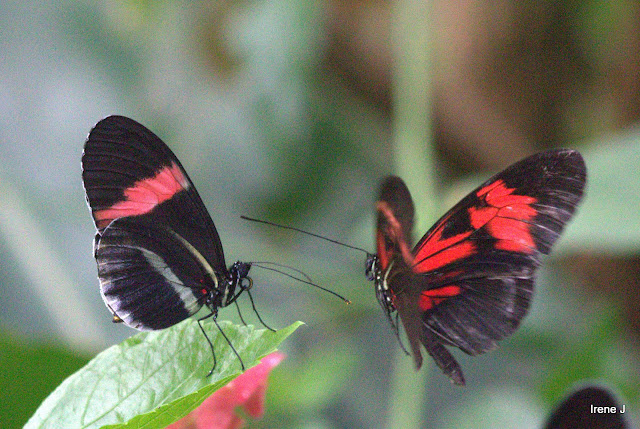 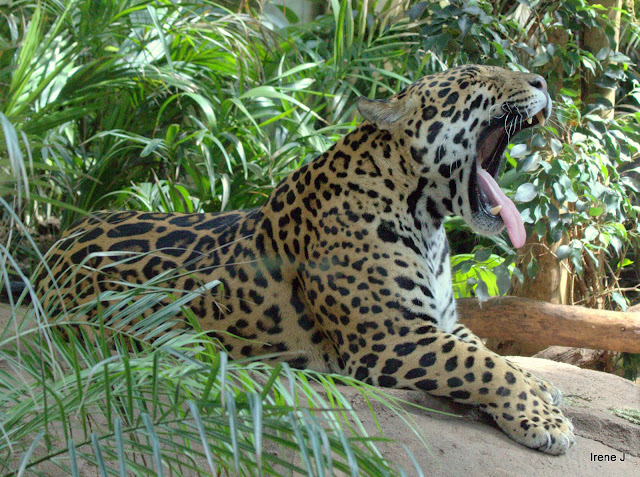 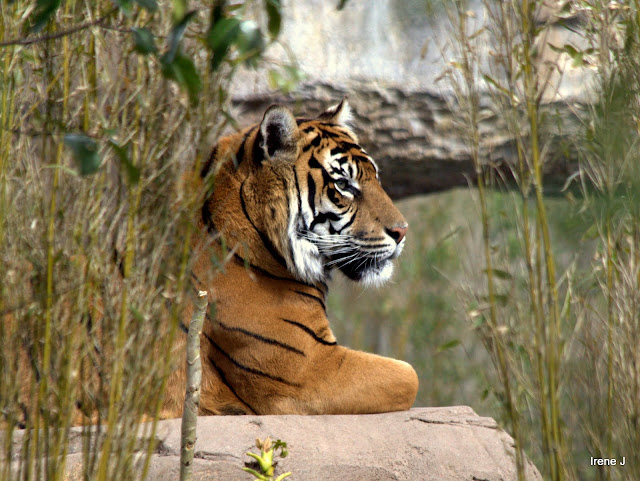 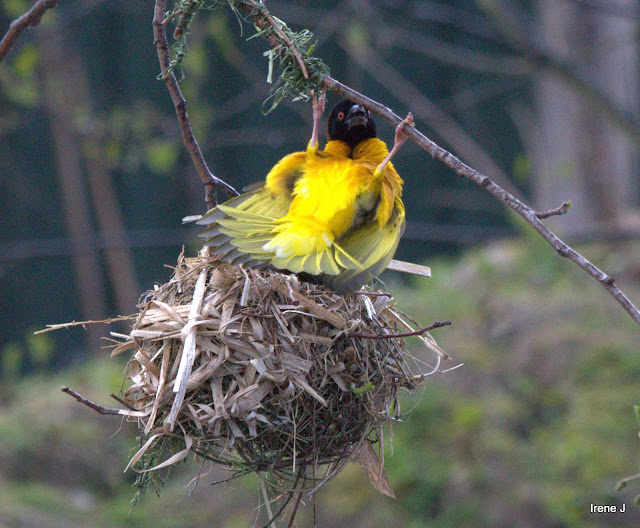 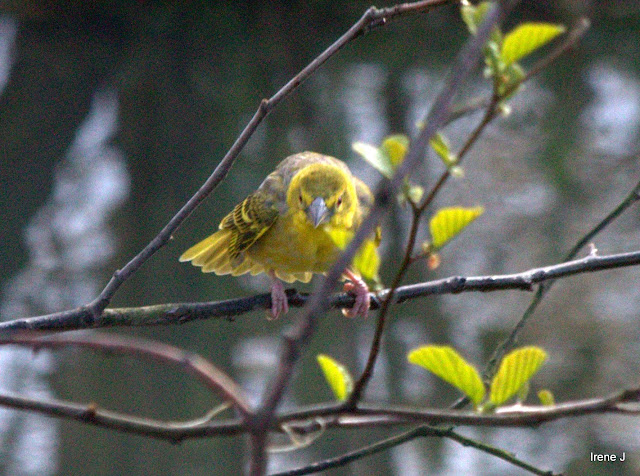 Posted by Ian and Irene Jameison at 6:12 pm 2 comments: