So, the overnight gales that everyone's talking about. You'd think that because the dock was covered high winds wouldn't worry us. Wrong!!! The plastic curtain covering the entrance flapped alarmingly all night, sleep was almost impossible, and even though it was tied back, I honestly thought it would take off at one point. Then on getting up this morning, we found the dock had at least 5-6" of water in the bottom. The torrential rain had raised the river levels overnight and water was coming in from the brook instead of flowing out. John and Mick arrived and immediately dropped the paddle and inserted a pump. With all this going on it delayed our start although with my wellies I could at least wade through and make a start. Margaret on the other hand only had ankle wellies so had to wait for the pump to do its job. I did nip outside to look at the river and was just in time to see a rainbow over the dock. 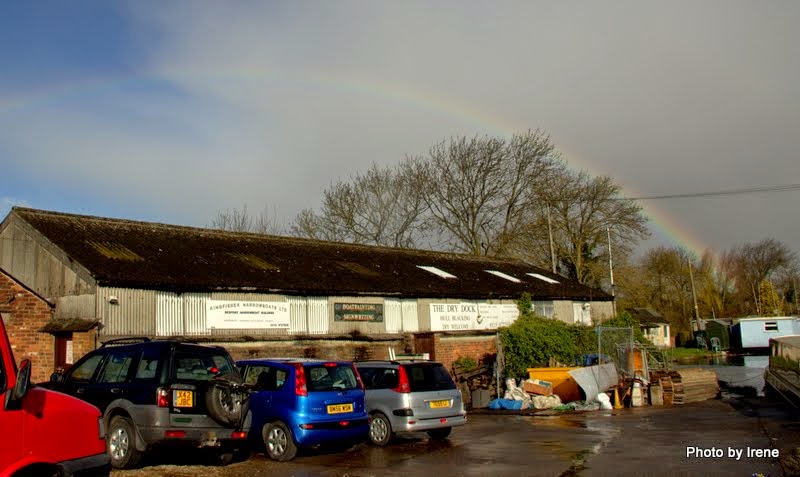 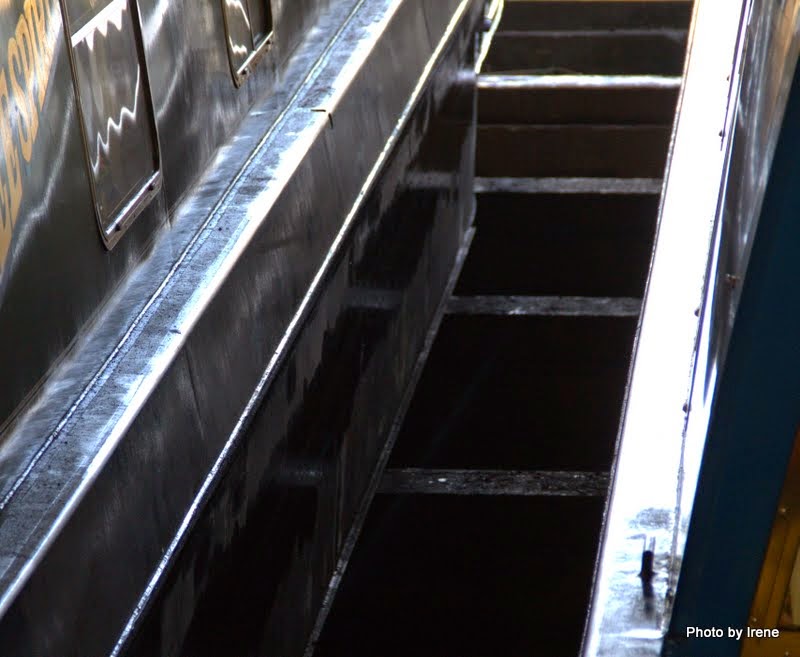 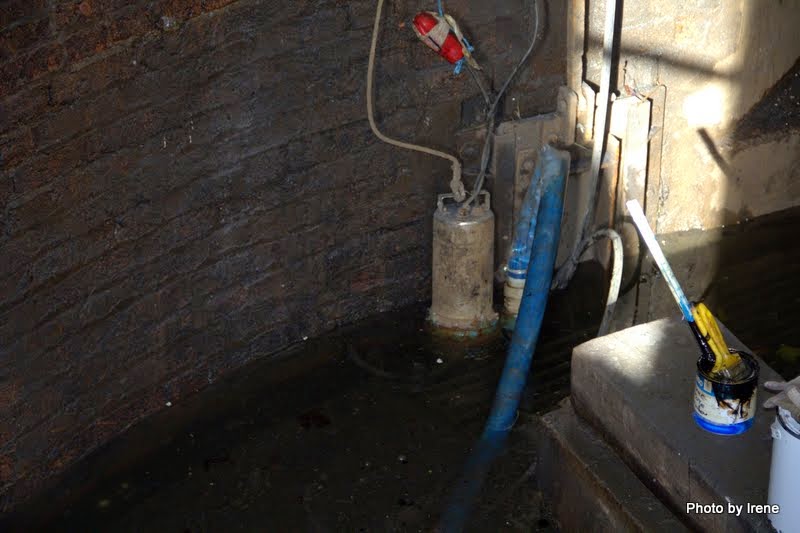 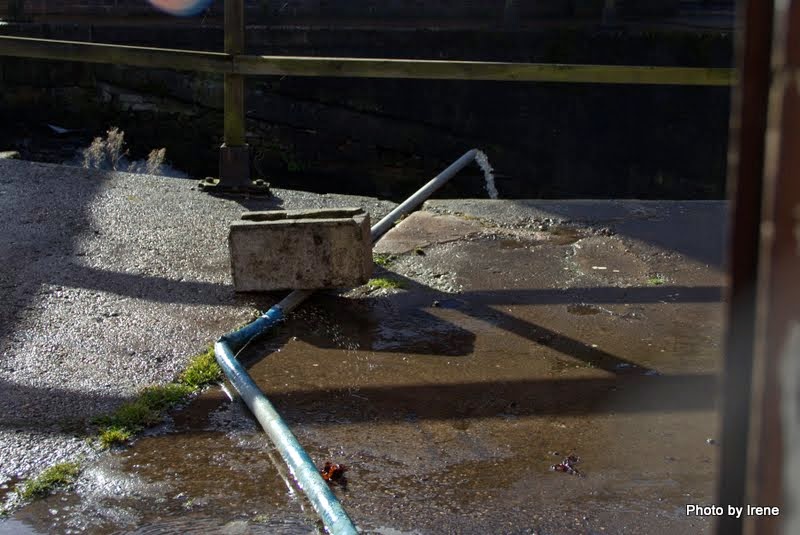 We've managed to do quite a bit today. I got on with the blacking and then painted a first gloss coat on the tunnel bands. Ian did all the hard work, though, prepping them both for me. He then went on to apply the bitumen under the swim area. No way could I bend down enough to do that. Hip still giving me jip you see. Then out came the sander and gunwales had a good rubbing down. After I had cleaned off the dust I called it a day. Ian was going to give the gunwales the first coat of paint but he was a bit over exuberant with the sander, going right back to bare metal in places, so red lead had to be applied and won't be dry for a few hours. It's one of his first jobs tomorrow and mine... the last coat of bitumen... hooray. 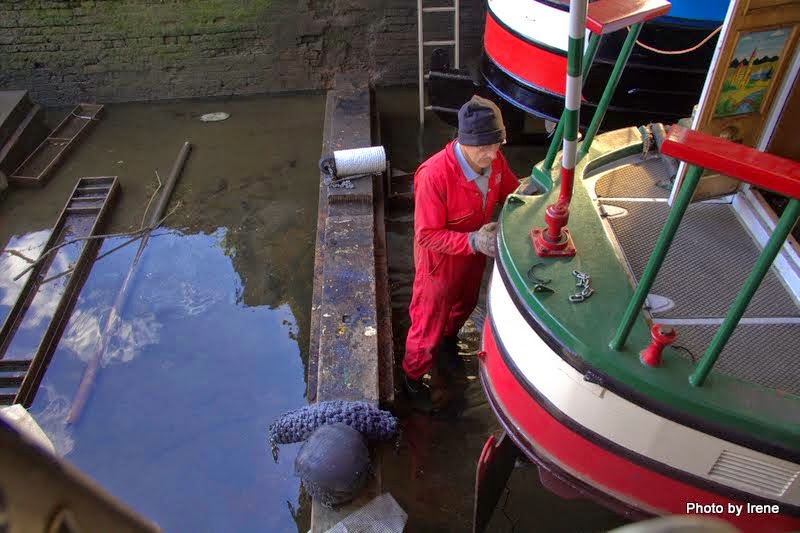 Posted by Ian and Irene Jameison at 6:57 pm No comments:

It wasn't long this morning before we were beckoned into the dock by Mick. Ian had nipped over as soon as the lads arrived at 9am and told we would be in within the hour. By 10am we pulled pins and pushed across to the dock entrance. Only a slight breeze this morning which made life easy and with Mick on hand to take the rope, and engine silenced, we glided effortlessly into position. Then Dennis brought up the rear but with a more difficult approach, John was on hand to pull Icings bow round. 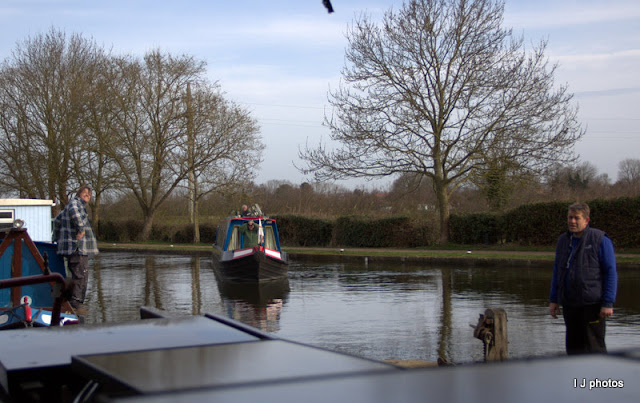 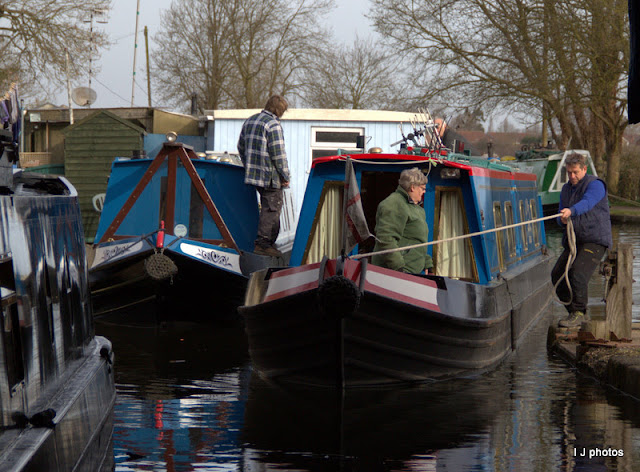 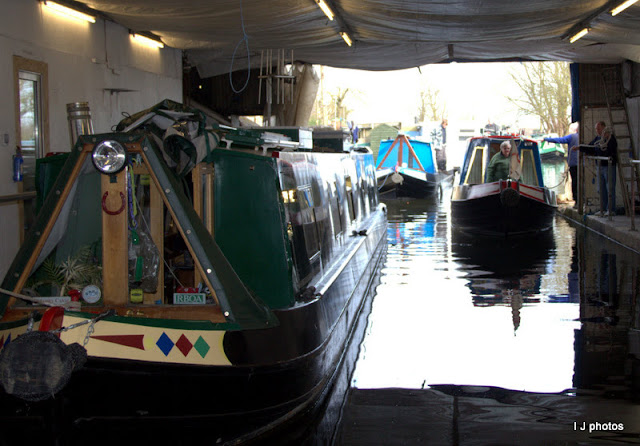 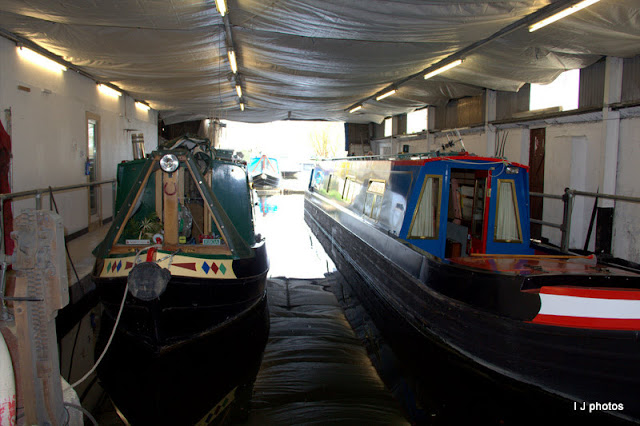 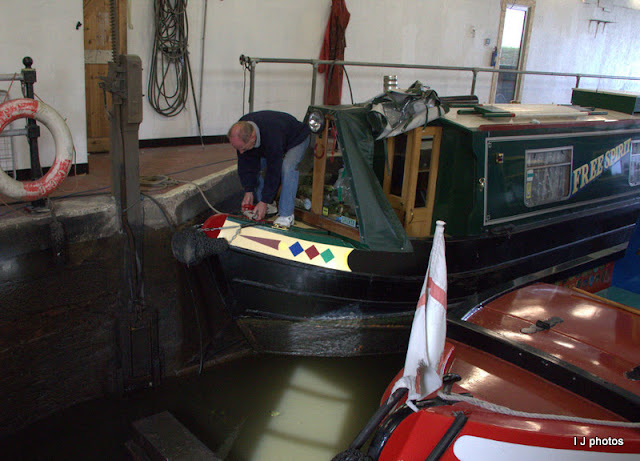 During the emptying of the dock, Stephen arrived (Dennis and Margret's son). Such a welcome sight 'cause he's a dab hand at jet washing both hulls. And a very good job he does too.  Before he got going fenders were removed and Mick ashed up the gates. Marvellous what a bit of ash can do to stop leaks! 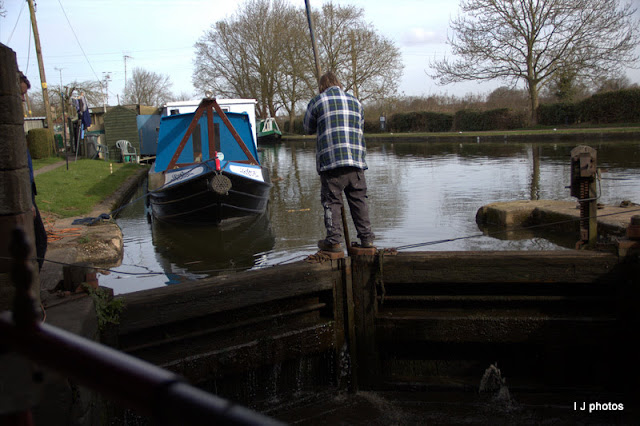 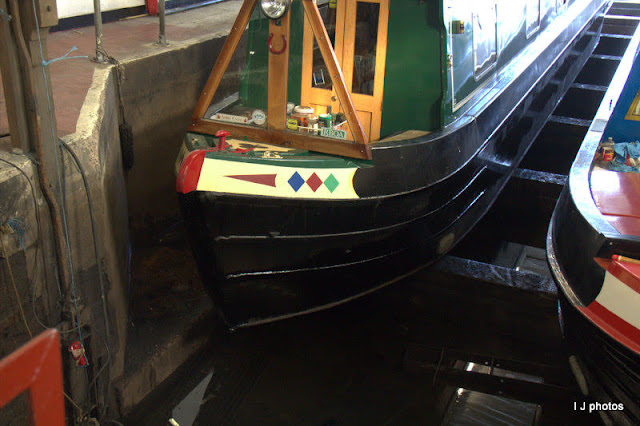 During lunch the hull dried and Ian went round with the sander removing as much rust as possible. Then on with my work clothes and to get the first coat of bitumen around the water line. By 5.30pm the job was done and so was I. My hip was screaming at me to stop with the pain now spreading down the whole of my leg. Can't wait to see the consultant mid-April. Just hope something can be done. Meanwhile, the painkillers are my best friend!
Posted by Ian and Irene Jameison at 7:55 pm No comments:

I'd forgotten all about the clocks going forward so when Ian said he was about to start breakfast I queried the early hour. The clock in the bedroom showed 8am so it took a moment to register that this clock hadn't been put forward. No lie in for me this morning then! Mind you with the rain causing the roof to vibrate (it was that heavy) I doubt if I would have gone back to sleep. We were so thankful we traveled to Trent Lock yesterday. The wind was strong then but nothing to the gale blowing today.

Ian was amazed when he spied sailing boats on the river. Out in this gale? They must be mad! Had a feeling that I might capture a capsize on film and I wasn't disappointed when the only two on the river both got into difficulties. Out came the rescue boat but wasn't needed as the sailers were obviously not novices. After several attempts both boats were upright again.

Tomorrow we go in the Kingfishers dry dock and then the hard work begins. No family to help us this time and Stephen (Dennis and Margaret son) can only make Monday afternoon. Last year he did an excellent job jet washing the hull of both boats. Me thinks this could well be his job this year.

Had to take a few wildlife photo's by the river. Well you know me.

Posted by Ian and Irene Jameison at 6:54 pm No comments:

It was on this cold, windy and wet morning that we said farewell to Sandiacre (for the next week anyway) and headed off in the direction of Trent Lock. Sean (C&RT) had already arrived (yes....like 8.30am climbing over the boats to get to the workboat) and any thoughts of more sleep was forgotten as the workboat roared into life and set off for the lock. With all of us awake we dressed hurriedly and helped them and the barge through the lock. This was day 2 of the cleanup, picking up along the stretch to Trent Lock, and most of the volunteers were to meet at Sandiacre. Our cars were nearly blocked in by the arriving masses but Ian and Dennis had the hindsight to move both cars over the canal bridge just in time. After all the volunteers were on there way, we did the car shuffle to Trent lock and by 11ish, and during a lull in the torrential rain to a mizzle, we were off.

Once clear of the lock we battled our way towards Dockholme Lock. Very surprised to meet another boat on their way up. So few boats travel the Erewash that we get somewhat complacent and assume no other boats will be met. Here I had a real job getting off the side. What with the wind pushing me against the bank and the lack of dredging I got well and truly stuck. Ian had already left the boat and was setting the lock with Margaret. Dennis was on the lock landing with Icing so it left me to get myself sorted. Lots of throttle forward and back managed to free myself just as the lock gates opened.
The sun came out as we departed which made for a much nicer cruise.


Now we fully expected every lock to be against us seeing as the cleanup mob was in front but didn't expect to have to close the bottom gates at Long Eaton. There was enough bods to close after them and, as I drew level with C&RT's workboat during their lunch break, (and with a grin on my face), asked what they were playing at. Sean winked and said it was about time we did some work (cheeky bu**er)

Getting moored up was a doodle. Not a single boat on the visitor moorings and the wind pushing us gently into the side. Only bow thrusters could have done as well! Within an hour the barge and pusher arrived making for Sawley. Got these last few photos before they disappeared. Quite a decent haul for the Erewash!

Tonight Christine, Kev, Josh and Thomas pay us a visit. I'm hoping for a lot of birthday cards 'cause all our mail goes to Christine. Might be a day late but still looking forward to opening them. Tomorrow is a day of chillin in readiness for all the hard work to start on Monday. It's our annual blacking event, gosh is it really only a year since it was last done?

Must just show you all the cake Margaret made for my birthday. It's called a Jiffy cake and is absolutely delicious.

Posted by Ian and Irene Jameison at 4:51 pm No comments: