Wow, what a sunset, red skies and weird cloud formations and over the reservoir, most spectacular. Lovely end to an almost perfect holiday. Just one more night to go and that will be high up on my most favourite place in the UK, the Dales. 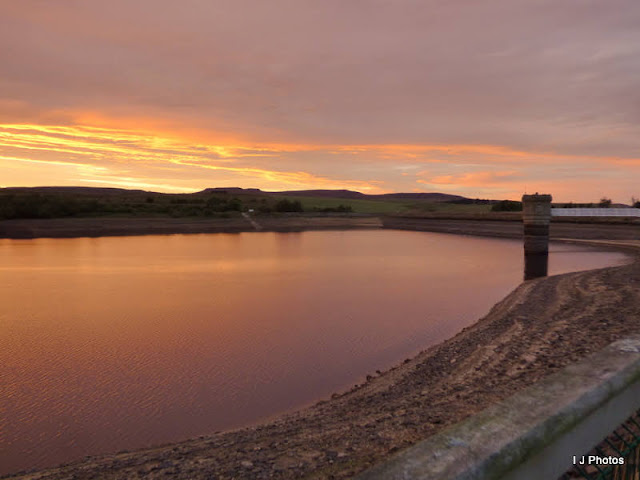 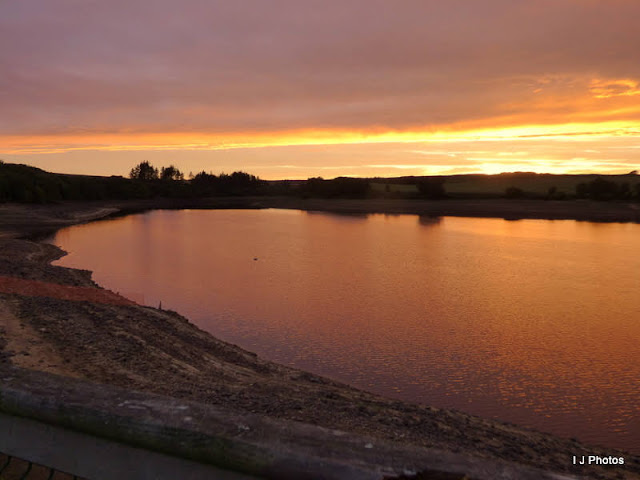 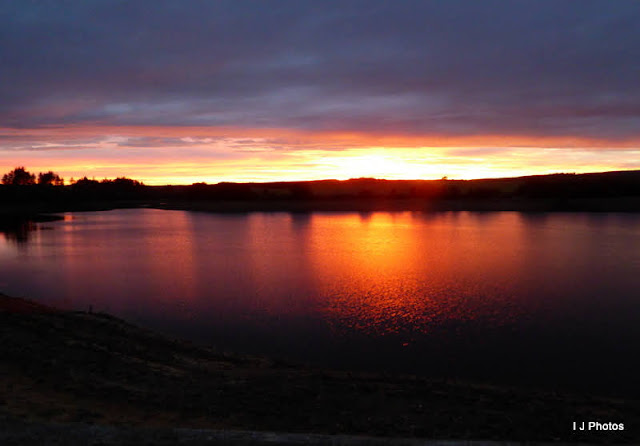 Before we left Fontburn reservoir we thought it would be great to walk around the perimeter. Not sure exactly how far that would be maybe about 4 miles? Anyway set off hoping to tire Toffee out. Another long journey was ahead of us to a place called Reeth, high up in the Yorkshire Dales. The path was easy going at first until it narrowed and we had to push our way through bracken avoiding trip hazards like tree roots. A long board walk with wide slats had to be negotiated, easy for us but Toffee struggled somewhat with the gaps. Thankfully she wouldn't return the same way...or so I thought! 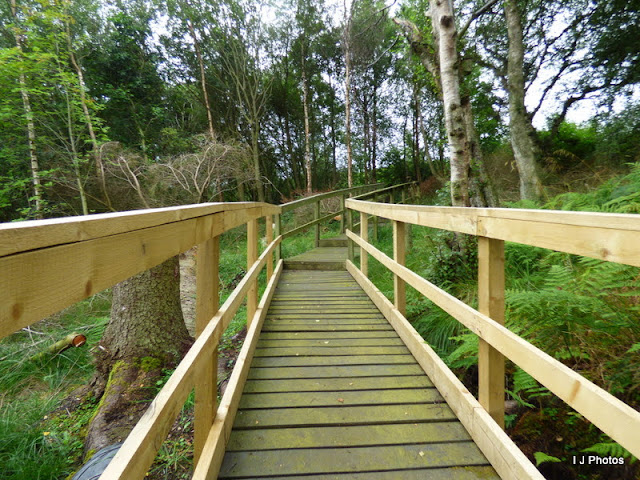 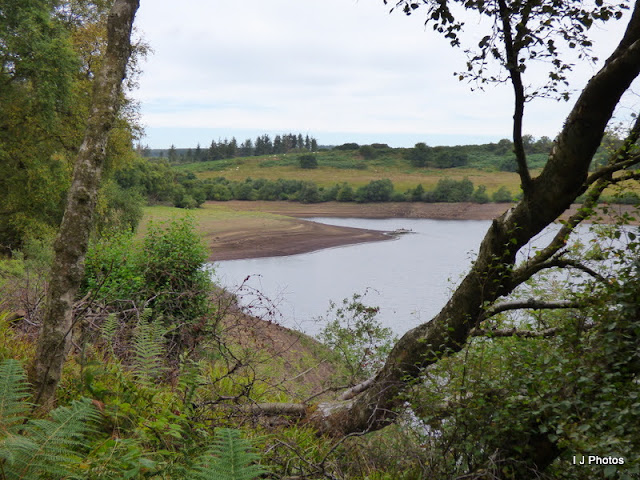 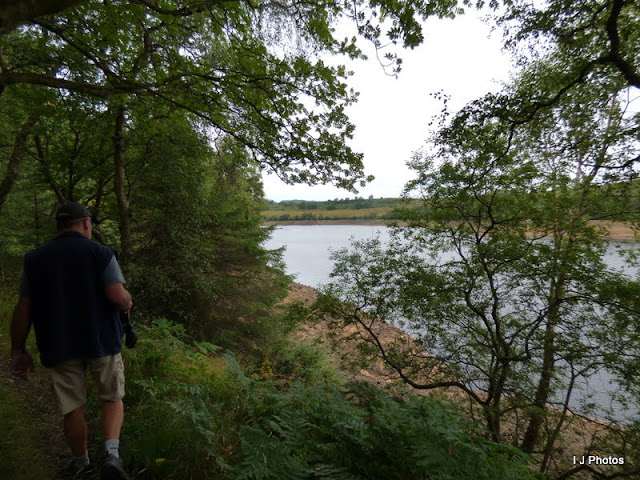 Thought a walk along the reservoir edge would give Toffee the oppertunity to have a paddle. Hmm bad decision. Just take a look at her paws! 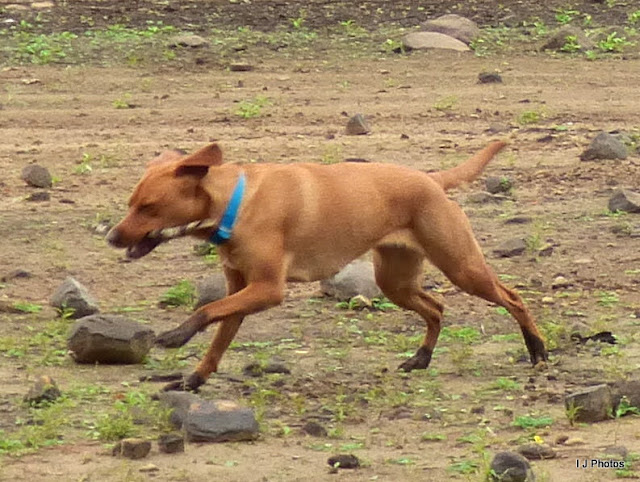 A small stream was found, and we made sure she went in to wash off that mud, didn't expect her to enter that huge pipe though! Disappearing from view we both yelled after her. She trotted out wondering what all the fuss was about! 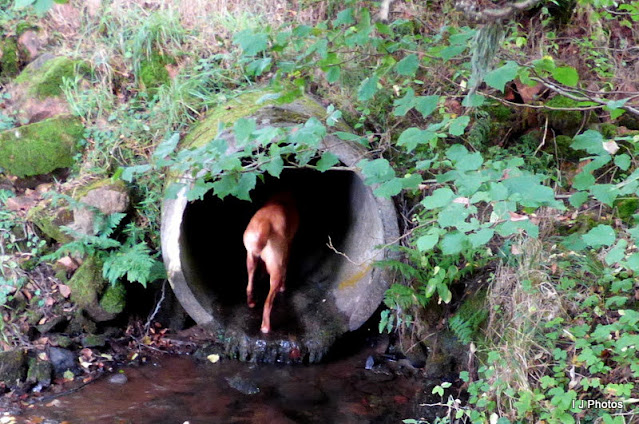 Eventually we came to steps, shallow ones, and I was too busy looking around to notice the first step. Crikey, down I went straight onto my bad left knee. OMG I thought I had done something really bad 'cos the pain was awful. I lay there with Ian fussing over me and being the concerned hubby, but I really couldn't reply to the questions of "Are you alright.?" I didn't know, could I even move the leg?  Then began to feel very light headed probably due to the shock. Eventually I tried to move and yes, found I could. Well it must have been a good 5 minutes before I felt comfortable enough for Ian to help me up. A few tentative steps reassured me that nothing was broken. Foolishly I told Ian I could continue on the walk, must have done a good half mile before it sunk in that I had to turn back. Blast meant Toffee had to walk along that boardwalk again. So very relieved when MB came into view. First thing I did was check the knee. Nothing was seen apart from the beginnings of a bruise. Somehow I had got away lightly, but I'm now very concerned about that saying 'everything comes in threes'. This is twice now so one more to go!

Stopping in Hexham for provisions, mainly wine because Tesco was doing a 25% discount on 6 bottles but only if they were over £5 each. Well that was no problem because Ian drinks a decent New Zealand Chardonnay and I drink Jam Shed. Back on the road and eventually arrived at Reeth by mid afternoon. Plenty of sheep about so it's lead on for Toffee whenever we took her out. 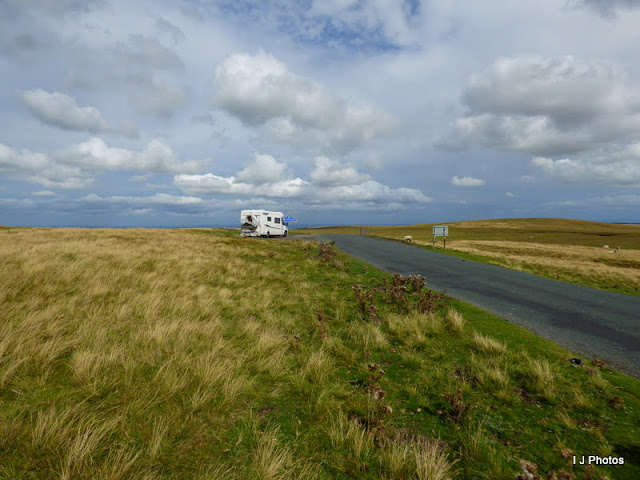 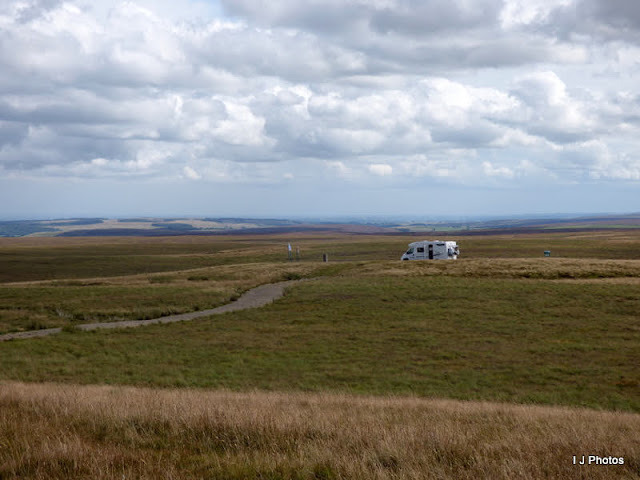 As nice as this part of the Dales was I really wanted to go back to what I call 'Herriots Ford' It's when James Herriot drives down a steep hill and through the ford on the opening scene of All Creatures Great and Small. It's at Low Row roughly a couple of miles from here. A very popular place for wild campers so how surprised was I when we were the only ones there. The peace was suddenly shattered by gun fire, ahh, must be the Grouse shooting season. Click HERE to read all about it. Thankfully no men with guns were seen in this vicinity and very glad of that too. Plenty of Red Grouse about, I heard them and saw a head pop up from the grass. Maybe tomorrow morning more will come. 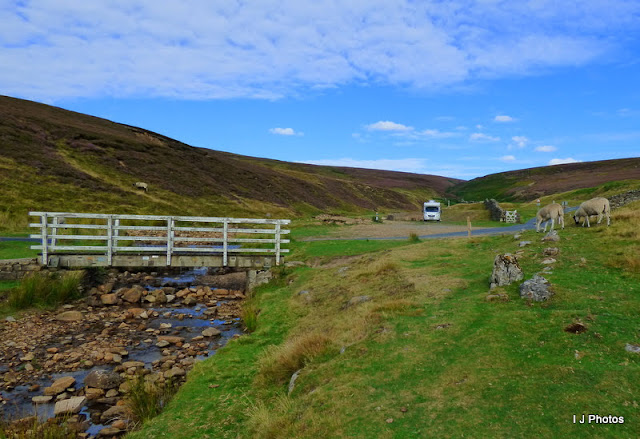 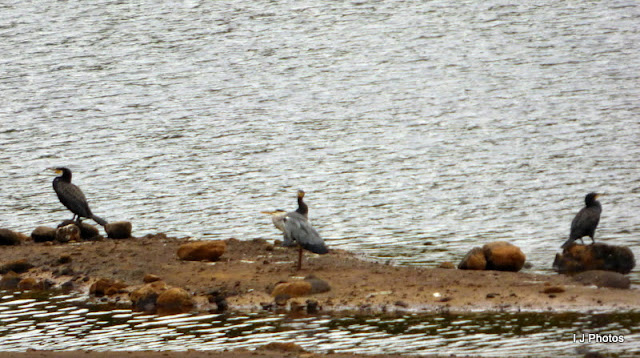 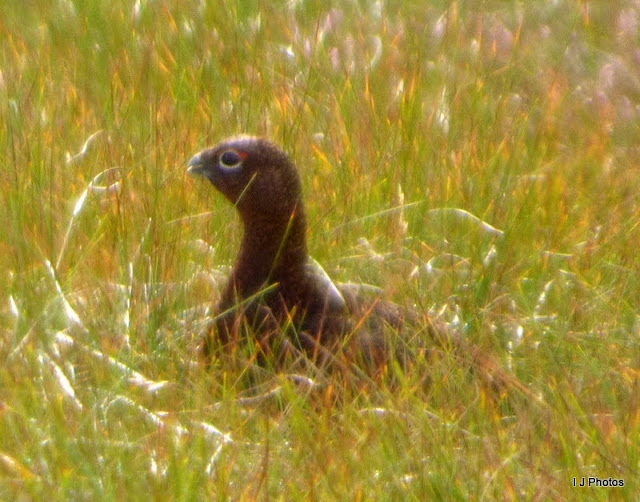 I don't see many photos of you so cannot be clear if you are using the stick as a matter of course???

Perhaps using a knee brace for a bit would be helpful. I remember buying one at Great Haywood after jumping off the boat in a hurry before the lock. Landed in a hollow on the offside and twisted my knee badly. Until I could get to the chemist, I used one of David's sturdy socks as a brace - I cut the toe off it, the put it on folded at the heel part for extra support.

I tried a knee brace but all that did was aggravate the varicose veins! As to a stick, I still haven't got one. It is on my list of things to purchase before coming to NZ. I must say you are very good at solving problems. I'm impressed, although I had a vision of David's quizzical expression as he realised one of his socks now had a dirty great hole in it!

A fabulous pic of Toffee by the waterfall, sorry that you fell and injured your knee again.
I wear those cheap stretchy suports from Prober Job/£1 shop. I had one on my leg over a varicose vein on a long walk when my knee started to ache badly, so pulled it up over my knee and it helped a lot. However, I've got to admire Marilyn's improvisation.
I think my favourite place could well become Reith, it looks lovely there, thank you for pointing out all these wonderful places.
Ann Makemson xx

Thanks, Ann, I may well look into those supports. If it helps the veins and the knees, definitely one to get. Hope you enjoy Scotland when you go. I must admit we have had the most amazing weather, well until the last week of the holiday anyway. Hope your stay there will be as good as ours. Enjoy.

My stick is still welded to my hand whenever I walk Monty, Irene. Just make sure you try before you buy - some collapse more easily than others. Mine is a Brasher and just snaps easily back into place after collapsing and it fits easily into a suitcase, rucksack. Have a great trip - I will watch with interest. Jennie x