Crikey it was NO to booze!

T'was 9.45 am and shopping in Kirkcudbright at a Tesco Express. Trolley loaded with supplies including Shiraz for me and New Zealand Chardonnay for Ian. To the checkout and unloaded the booze first. Then something we hadn't bargained for...no alcohol sold to anyone before 10 am or after 10 pm. First thing the checkout guy did was confiscate the booze. "Why" said I "It's not a Sunday." No" he replied, "But Nicola Sturgeon has decided this was to be the best policy for attempting to stop alcohol abuse." To say we were flabbergasted was an understatement and then a voice piped up from behind Ian, "I'm Scottish and I didn't know that!"

Ian returned 10 minutes later to claim the confiscated goods, and it was off to a place called Clatterinshaws Loch. This is one of the best places to enjoy the night sky as the visitor centre overlooks the darkest part of the Forest Park. The plan was to stay overnight, not that we would be able to see the stars and Milky Way, the moon was still too bright for that display

Travelling happily along the A712 and suddenly Ian slammed on the anchors, well slowed down quickly anyway, for there, trotting down the road were two deer! A quick glance in the mirror to see if another car was behind MB and the hazard lights went on. Well those two ran this way and that way, tried to get through the hedge but failed. You could see both were in some distress and when another car was seen in the distance travelling at some speed, I did wonder if they would stop. Thank goodness the road was quiet and that car did slow right down. The deer somehow escaped the road by darting through a gap in the hedge and ran galloping across an open field. Amazing what sights are to be seen when least expecting them. I believe, and correct me if I am wrong, they were Roe Deer. 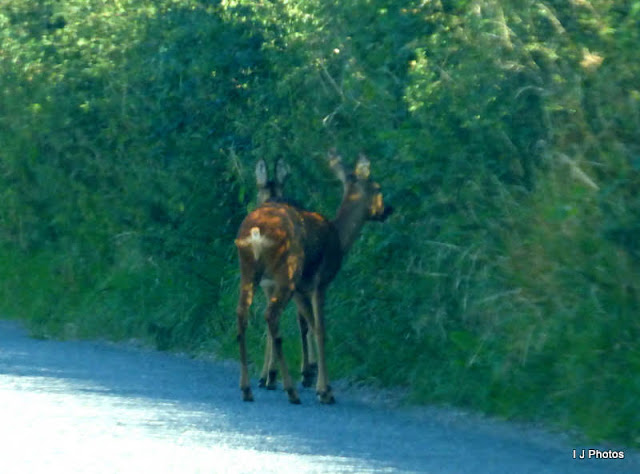 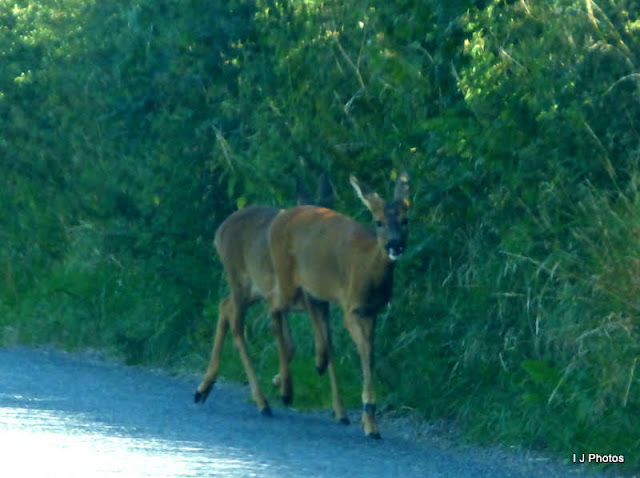 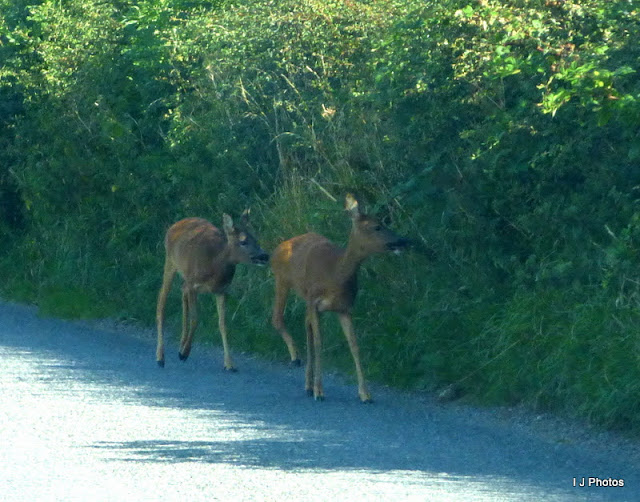 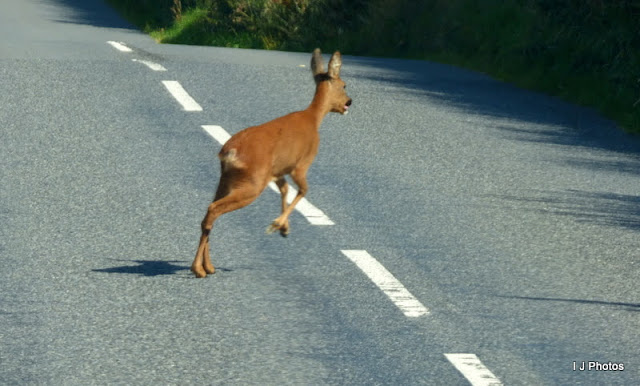 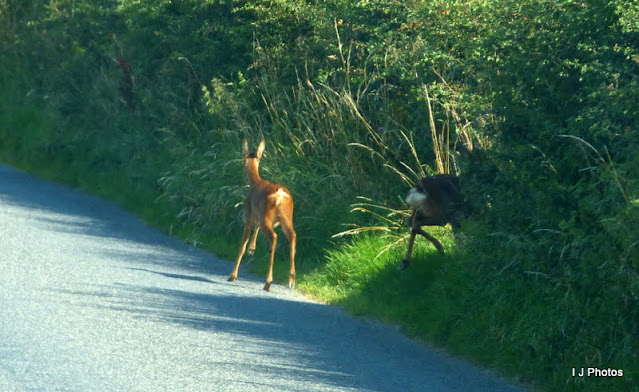 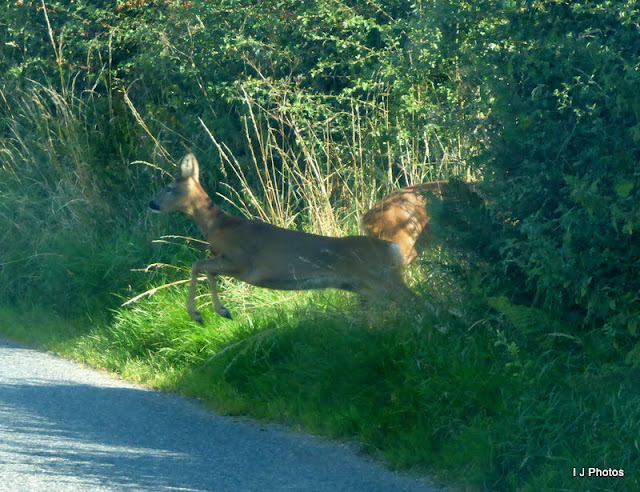 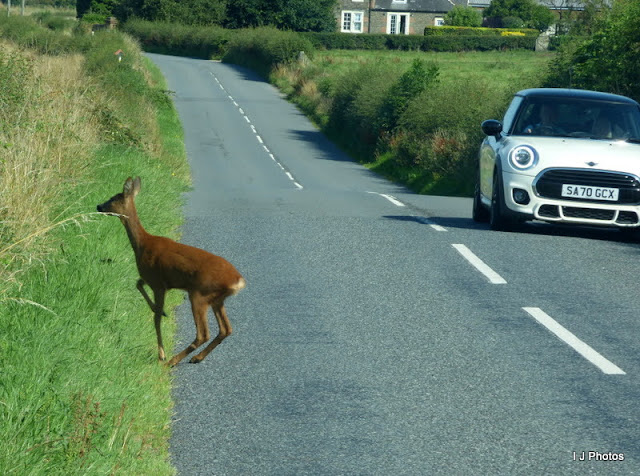 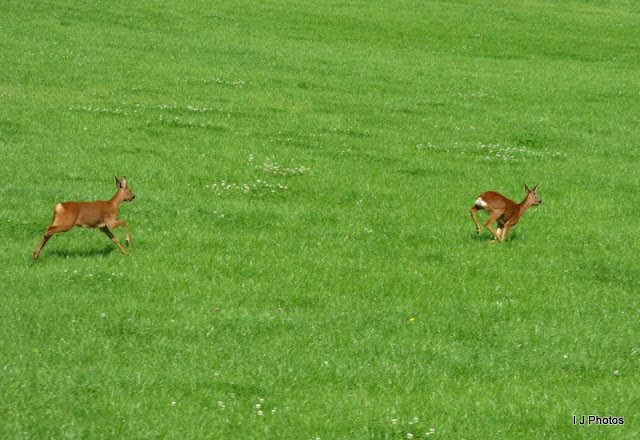 Once we arrived first thing was to pay for the overnight stay. £8 only which included all that day parking as well. A walk along the loch shores was planned, must get Toffee in for a swim to clean off all that salt from the seawater dip yesterday. Another bonus was the car park had an elsan disposal point, and by the visitor centre, toilets and water tap so no need to go into a proper site for the foreseeable future. 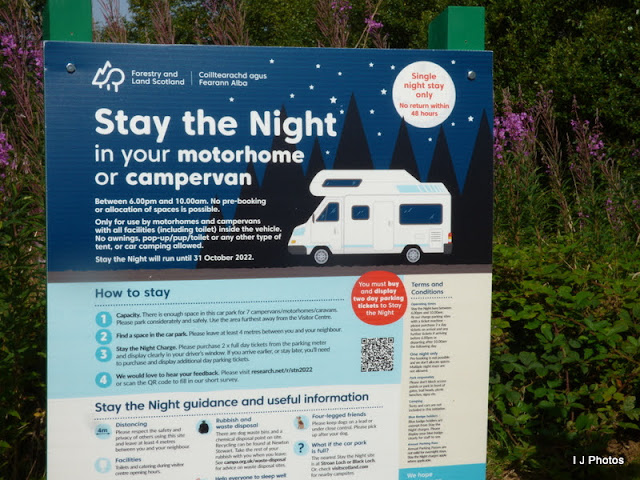 Wow, how beautiful was this place. and the weather just perfect. A pleasant breeze blew which helped to cool us down, Today's temperature was again well above 25 degrees. 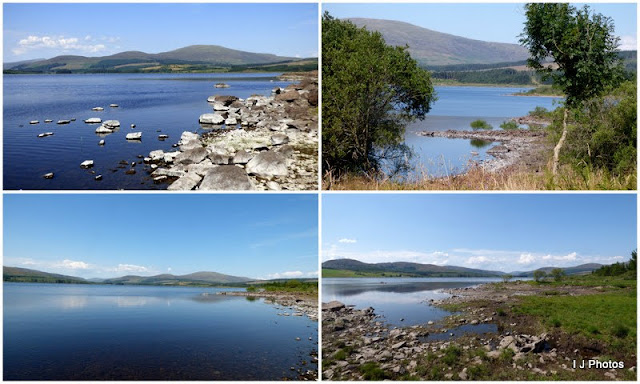 Toffee made a B-line for the water, from being a lab that we had to coax to go in, now we can't keep her out. 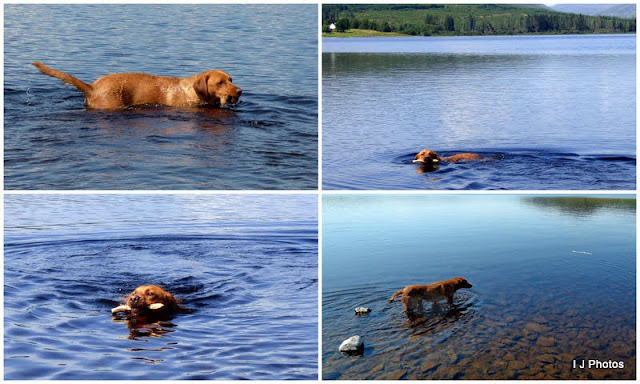 From the visitor centre another walk took us to Bruce's stone.  Robert the Bruce, King of Scotland had his first victory over the English after his return to the Scottish mainland in 1307. Several more stones are marked in Scotland, this was by no means the only one. (Glentrool, Loch Trool also has a stone to do with defeating the English.) 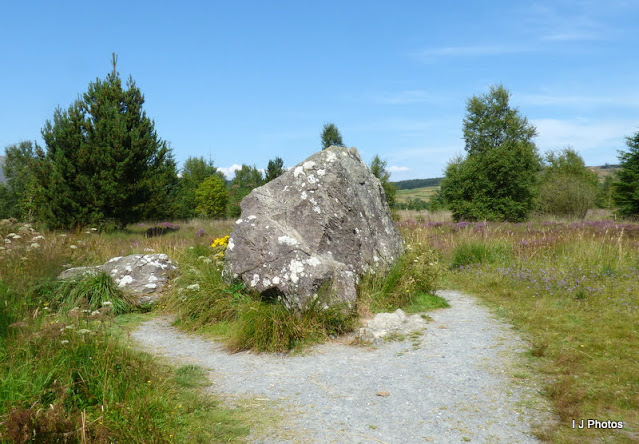 "Bruce's Stone. It was here on Raploch Moor that Robert Bruce, King of Scots, defeated an army of the English in 1307. It is said that Bruce rested against this stone whilst his followers gathered up the spoils".

Another path led to the Loch and another opportunity for Toffee to swim. 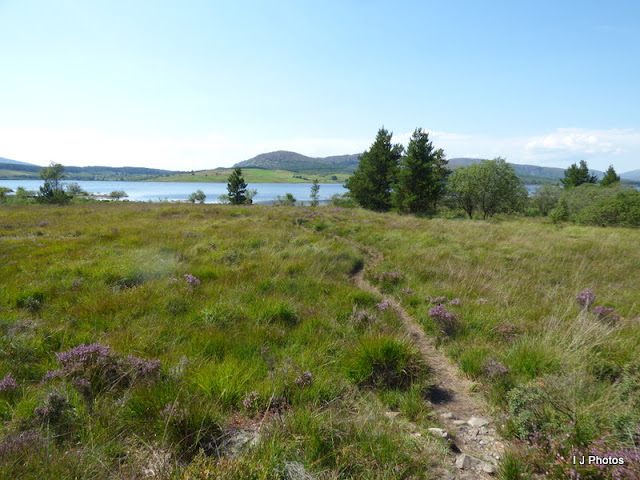 Stopped for a cup of tea at the café, treated ourselves to a scone (me) and Ian a millionaires shortcake before getting the chairs out and chilling in the shade. We have a plan for tomorrow. Head down to the Dam first and then down the Rinns of Galloway peninsular to the Mull of Galloway. 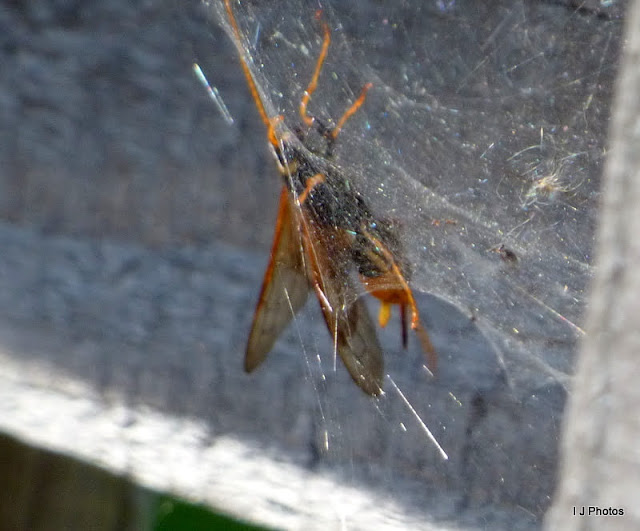 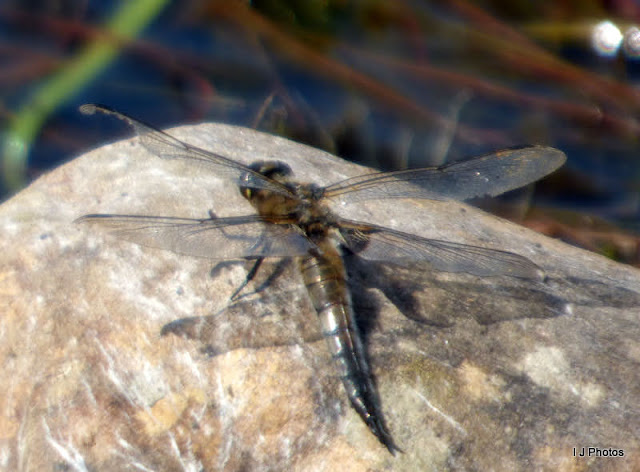 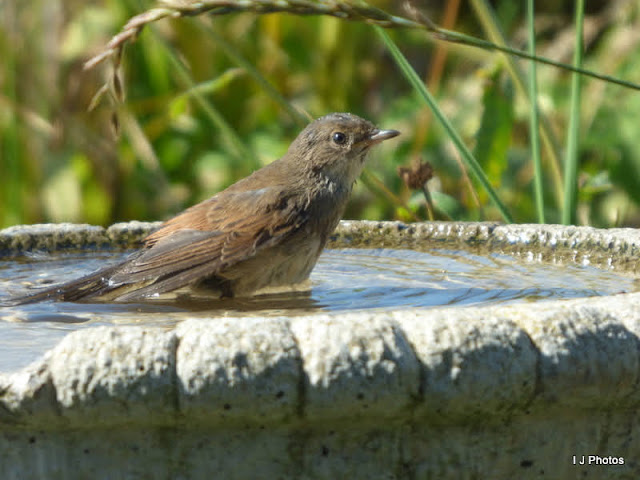 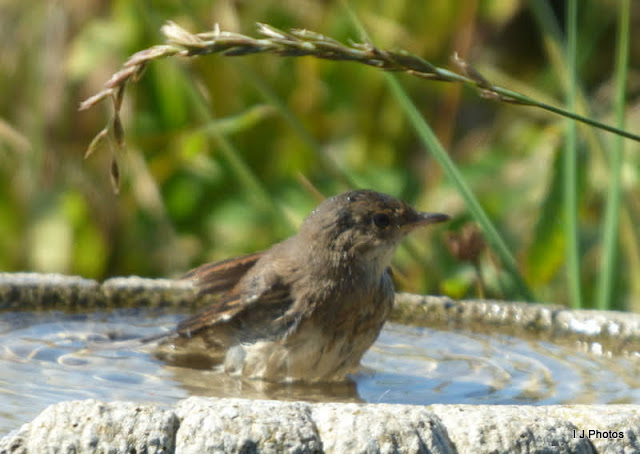 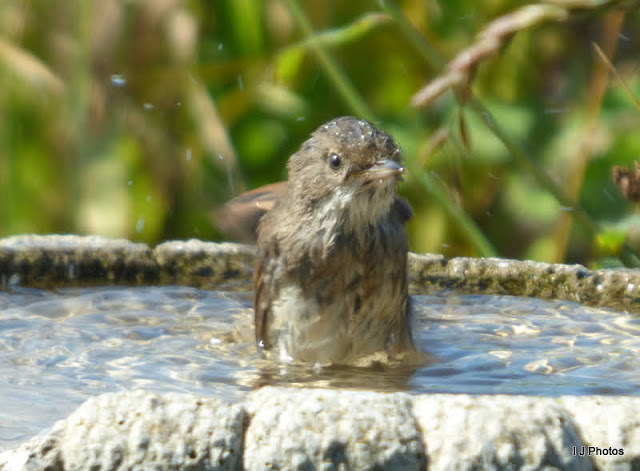 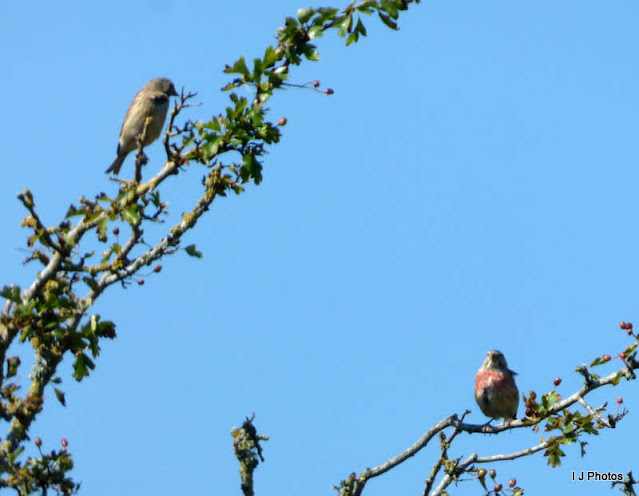 Posted by Ian and Irene Jameison at 5:58 pm

Amazing that alcohol sold only between 10am and 10pm, won't discourage folks from drinking it in any quantitie they may do.
When we were wild-camped at Knockan Crag we were watching the deer grazing below one evening near a four-ish foot high fence. From a standing position, they just bounced over it easily.
Btw we can recomend this place with spectacular sweeping views over the loch surounded by mountains.
However a bit shocking for you when they jumped out in front of you whilst driving along.
We liked watching a flock of sparrows enjoy washing themselves in a large puddle in the car park at Tesco in Tonge, so liked your close up pics of them on here, thank you.
Ann Makemson.

Thanks, Ann. Looked up Knockan Crag, looks amazing. Shame it's too far North, I don't think we will have time to go up there, Toffee has to be returned to MK next week. Xx