That lane was quiet, pub turned out about 10 pm and not another car came past. Really looking forward to sleeping in, well just until Toffee shoved her nose under the quilt to get us up anyway! It turned out not to be because a car turned up and parked behind us at about 6 am. And that was first of many. Twitching the curtains we could see people changing into walking boots, taking out backpacks from the boot with hiking poles propped up against cars.  Fell walkers we presumed. 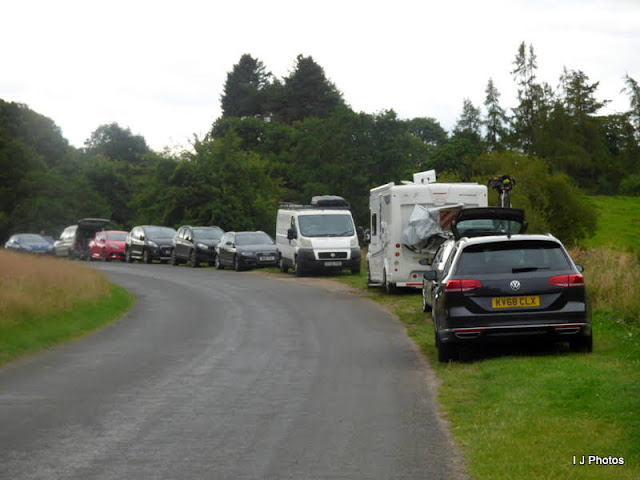 Decided to get up, have a quick breakfast and vacate our space for those yet to come.

Gosh a convoy of cars came as we left. Many a time we had to pull over to allow long lines of cars to pass. Goodness knows where they will all park. Anyway Toffee had still to be walked, so I suggested going back to the wood where we tried to overnight yesterday. Plenty of spaces to be had in the upper car parks on arrival but having been there yesterday we knew more space to be had down below.

A short upward climb to the café and to maps showing routes to take. We chose the red/green/blue circular path and then the black towards the Osprey viewing. 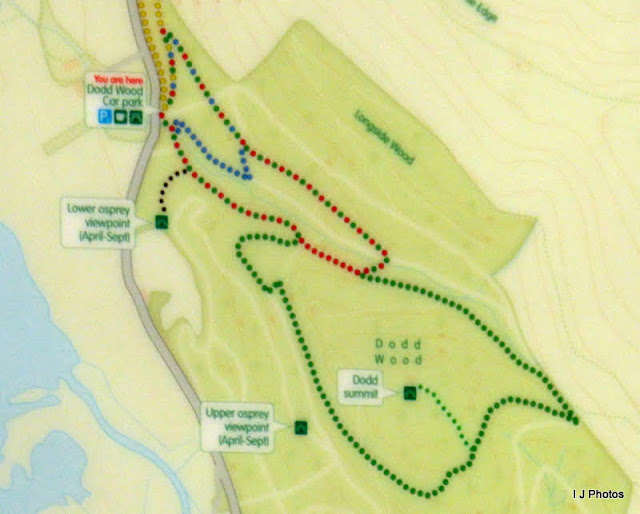 The green summit walk would be too challenging, although we had been told the views from the top were spectacular. Not today though judging by the low cloud cover. 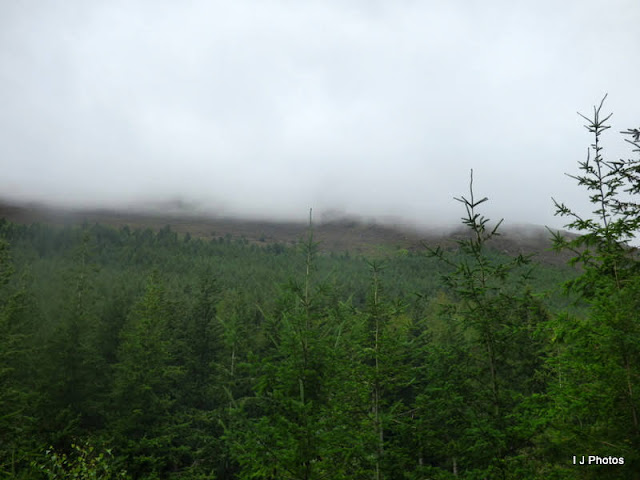 This was not an easy walk! We climbed from the word go, first on a very stony path and then along a narrow track through the wood with a quite a drop to the side. 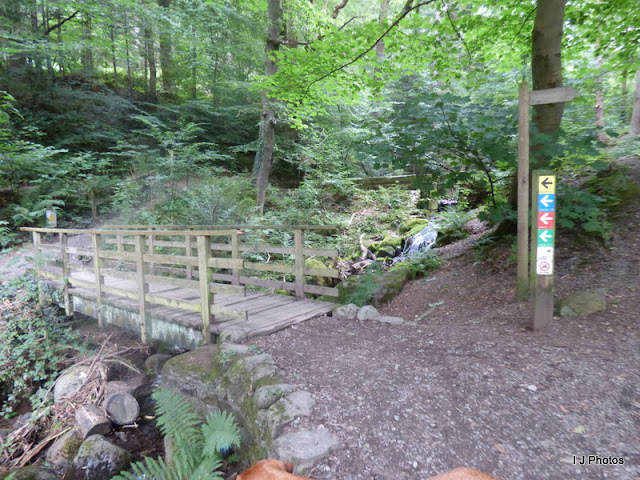 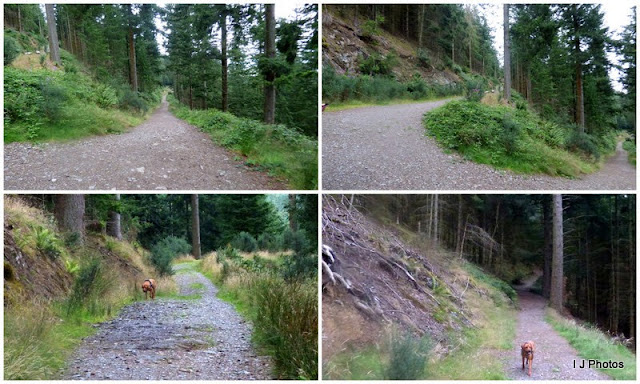 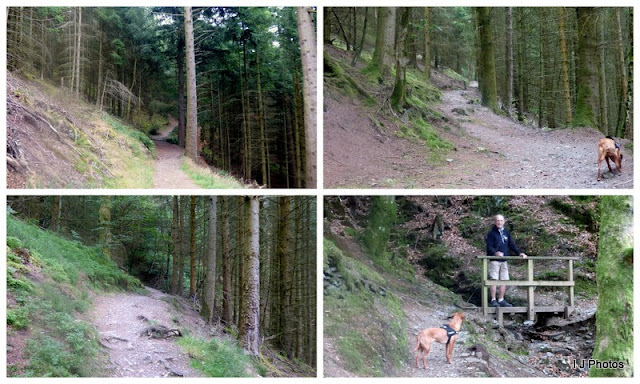 The bridge marked the point where the path finally started the descent.

I struggled again with going downhill. Why do I put myself through this? I f I stopped pushing myself I'll never get fit enough for the New Zealand adventure. I am due to see the physio some time in September. Hopefully he can sort the knee problem out. Anyway the path down ended abruptly with a clamber down. Ahead was another post with arrows pointing toward another drop. Not that nice looking path going off to the right. 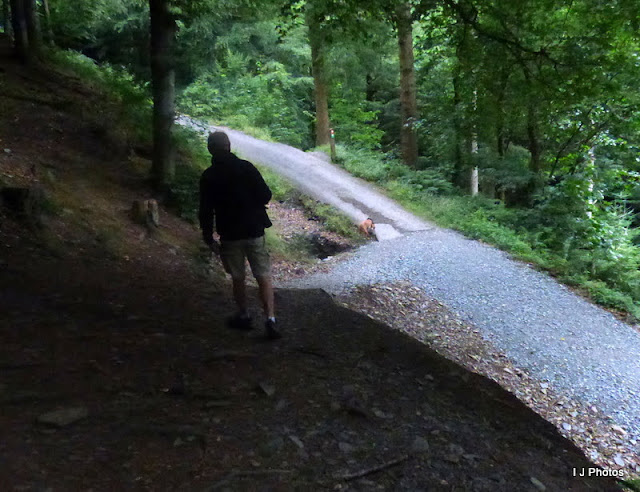 My penguin steps eventually got me to where the black arrow pointed to the Osprey lookout. Ian bless him, kept stopping to see if I was okay or maybe he was just looking back and inwardly laughing at the way I was waddling down the path. Anyhow, I was glad of his helping hand when needed. Now I'm not sure what we expected when we arrived to where the Ospreys were supposed to be, maybe a viewing platform where the Ospreys were nesting? Nop this viewpoint overlooked a very small part of Bassenthwaite Lake where the Ospreys sometimes hunt. Chances of seeing that was about the same as seeing a pig fly! Nice view though. 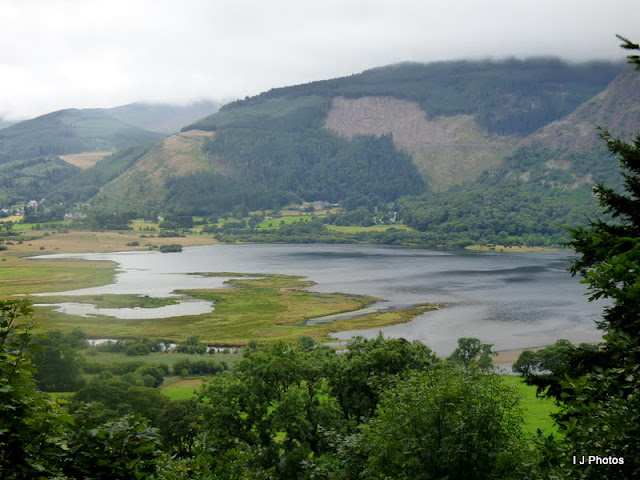 That last descent down to the café went much quicker. It was the thought of a nice cup of tea that spurred me on. We managed to grab the last outside table, Ian went in to order and returned with two hot homemade sausage rolls with side salad. Went down a treat and sitting down for 30 minutes helped no end. Back to MB and the time now well after 2 pm we set off for the campsite. I was looking forward to getting the washing done, after all a machine was listed on their website. First thing to do was get the washing on the go. Ian walked to the block to see how many £1 coins it required and searched in vain for the machine. A large mark on the floor showed where it should have been but where was it. Groan...now I had to handwash the smalls. Weather wasn't brilliant either and had no idea how I would get it all dry. Oh well, just had to hope the wind would do the job. 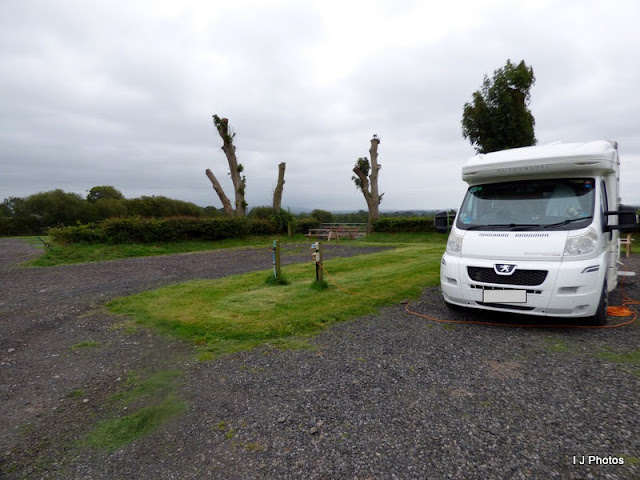 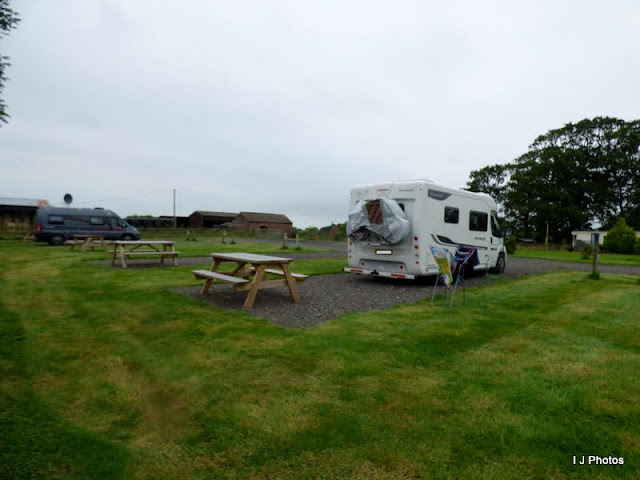 No blog tomorrow, we are going to visit friends and stay with them for one night. They have a new puppy, it will be interesting to see how Toffee acts around it. Hopefully it will wear her out by playing together although nothing seems to wear this dog out!

Loving your travels as usual, just want to let you know of my experiences with my nordic walking poles/hiking poles. They keep me upright! and take an awful lot of weight going up and down chalenging walks. I would not go without them - love them. Hope this will help you Irene.
Looking forward to more of your journey's
Best wishes Judith Baker x

I mis-spelled the stick - try Leki.

Get whatever hiking stick works. Things to make sure of:
* extendable so you can hold it at about breast height
* you can break it down so it fits in your case for travel to NZ - just make sure you clean it thoroughly before you pack it.
* the handle is in line with the pole, i.e. not at right angles to it
* it has a wrist strap
* it has a spike at the bottom (even if with a rubber stopper) so it can dig into the ground and keep you secure when you lean on it coming downhill.

Buy two and don't skimp on cost - you need quality. Try uphill and downhill with two. If you find one works better for you, get Ian to use the other one. And be prepared to rip it out of his hand if you need it ...

Walking with a pole takes so much pressure off your knees and ankles. Go shopping!

Wish we could have some of your rain and coolness down in Devon! At least the washing is completely dry and ready to put away soon after lunchtime.
Debby