A hike in the heat

So very hot. All windows were left open last night and still we suffered. Thankfully no nasty bitey things came in, mesh was in front of the windows but midges seem to get through the smallest hole. I could hear Toffee breathing heavy...or was it Ian...hmm...not sure now! Anyway woke fairly early, Ian took Toffee out, a cup of tea was made but no lying in bed today. It was much cooler outside so had breakfast consisting of a boiled egg and toast in the shade under the awning. Showers in MB were had last night and with a tap on site, thought we may as well top up the tank. Slight problem, a hose was already attached to the tap which we would have readily used except the nozzle was too big to fit in our filling hole. We tried to modify our hose to no avail so with me expecting to get drenched, held the nozzle over the hole while Ian stayed at the tap end regulating the flow. It worked and what spray did hit me was actually very welcome. Quite refreshing.

Job done we set off for Mereshead Nature reserve. A RSPB site so again as members got in for free. I did wonder if we may have been a little stupid in going out with temperatures already over 25 degrees. Not so much for us but how would Toffee fare. Three water bottles, sun cream, anti midge spray and hats, not forgetting Toffees drinking bowl, and we were ready for the off. 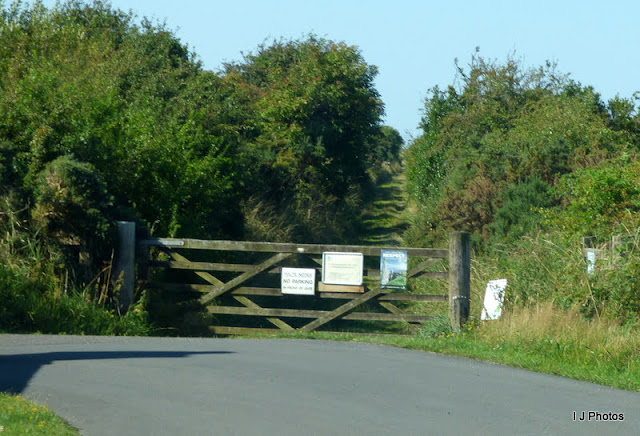 The three-mile circuit took us along the reserve and out to the sands, Toffee coped remarkably well. Tide was well out, could have walked a fair way except for my fear of quick sand. The beach was made of shells, millions of them and to save Toffees feet from being cut by broken ones we kept to the wet sand. Footprints were made, at least  1" deep but no more than that. 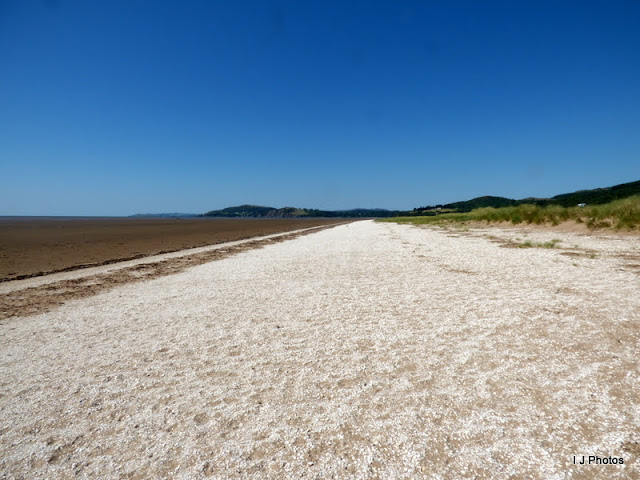 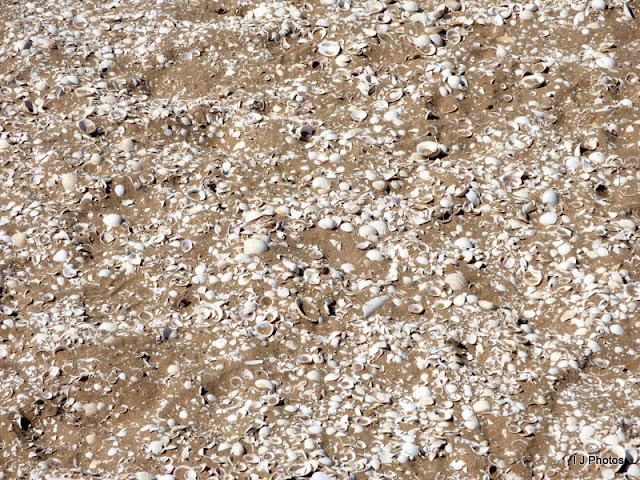 Two markers showed the route, at least 3/4 mile between the two and the advice was to not stray beyond. Not sure why and didn't ask, although as a nature reserve it could have something to do with the shore birds and not disturbing them.

Before heading off the beach a huge pool lay before us perfect for cooling off a hot doggie. Wish I had brought my cozzie 'cos it looked that inviting. 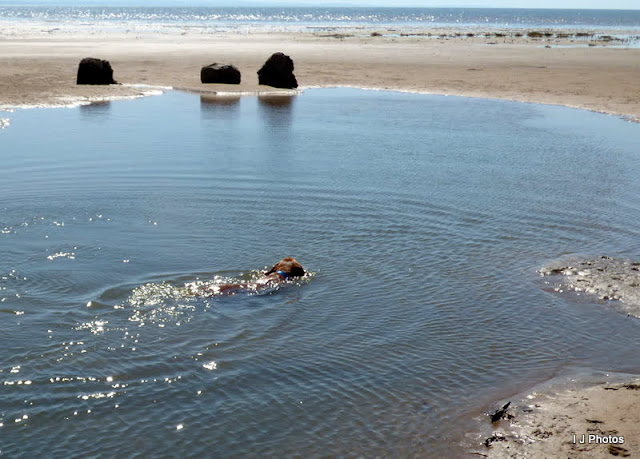 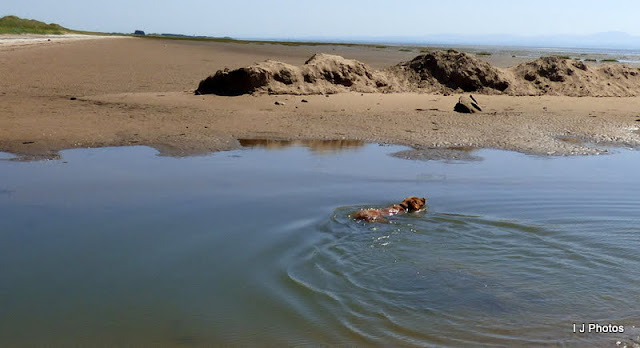 Dogs being inquisitive, Toffee had a nasty shock when she tried playing with a bug. Landing on her nose she tried to shake it off. Did it bite her? We will never know but a lot of head shaking and pawing at the nose trying to get rid of it. Turns out it was a Longhorn Beetle

The beetles are not harmful to people, but they should be handled with caution because they can nip, although the nip is unlikely to penetrate the skin or draw blood. For most people the nip is likely to be no more uncomfortable than a nip by one of our larger native beetles. 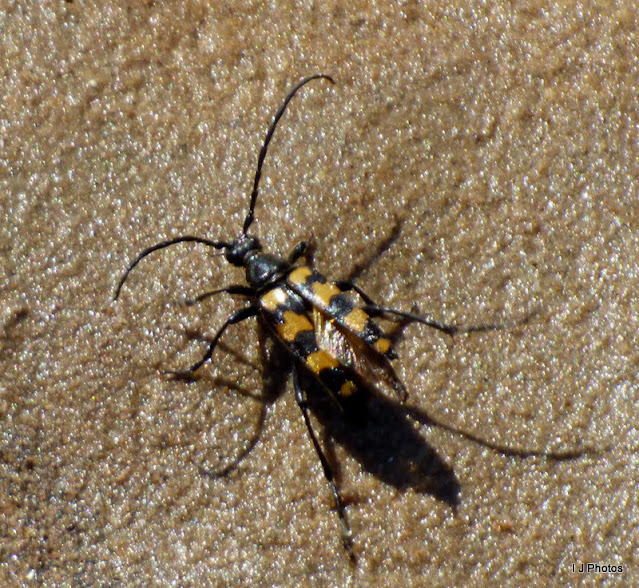 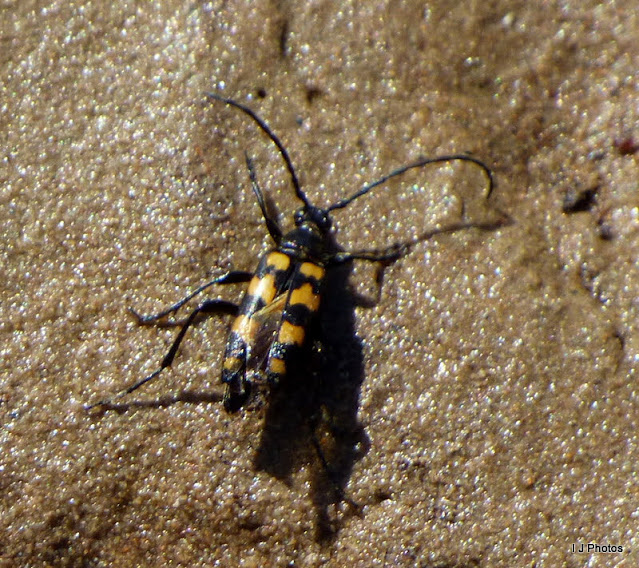 The tide was coming in fast and before we knew it the pool was filling with fresh sea water. 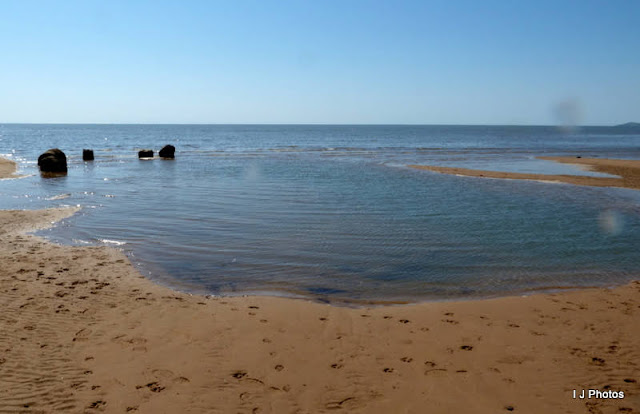 We must have been out for well over three hours, me stopping to pursue dragonflies didn't help and of course watching Toffee play in the water all added to the time. Getting back was a relief although stepping into MB to be greeted by a wall of heat was quite a shock. Curtains had been drawn and the skylights left open but made no difference in cooling the van. 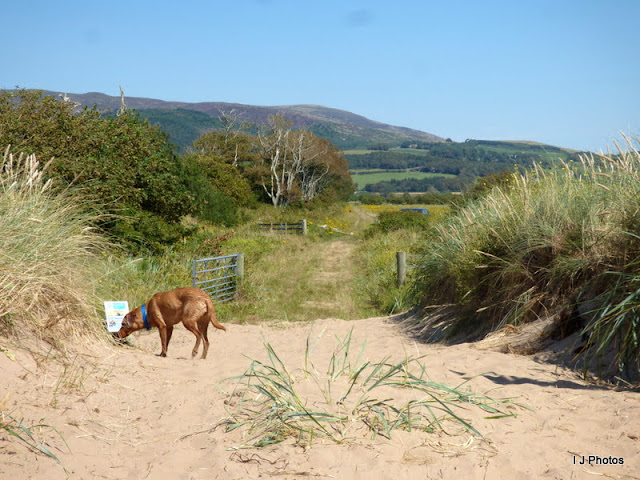 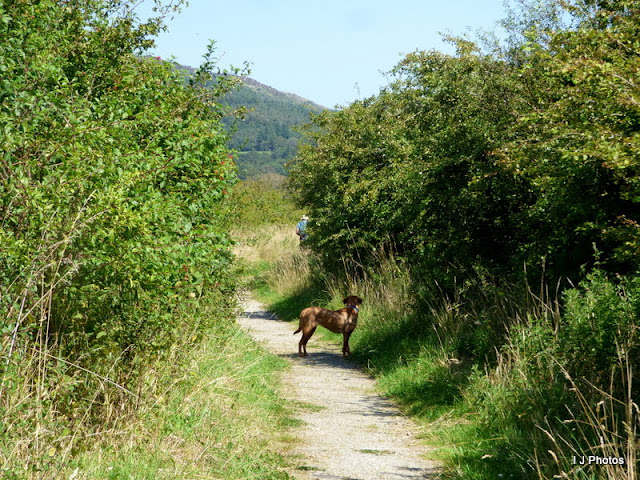 Finally left to find somewhere to stop overnight. 18 miles further and a Park4night was found at Dundrennan Abbey. This was yet another historic building closed to the public. Seems to me that all ruined Abbeys and Castles are no longer accessible. This from Scottish Daily Express

A record number of Scotland's historic buildings have been closed to the public amid fears the country's heritage is being left to crumble because of chronic underfunding by the SNP Government  Currently, 67 of the properties managed by Historic Environment Scotland (HES) are deemed "unsafe" and shut to visitors. Castles, palaces and abbeys have been sealed off because of the threat of falling masonry

The unprecedented scale of the closures has been blamed partly on the effects of climate change, which is wreaking havoc on the buildings' ancient and often fragile stonework. However, as first revealed by the Scottish Express, experts have also warned that the SNP has failed to provide the funding to allow HES to carry out necessary maintenance. As well as preventing members of the public - plus thousands of overseas visitors - from enjoying sites of interest, the record closures are hitting many nearby areas that rely on tourism. Caerlaverock Castle in Dumfries and Galloway is among the castles currently off-limits

The car park is below the road and there has been considerable tractor movement these last few hours. Rain and possible thunder storms have been forecast for early Sunday morning, I expect getting what crops in before the storms hit is of great urgency. 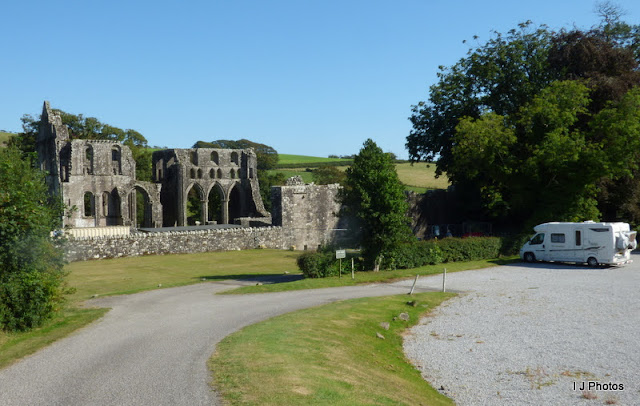 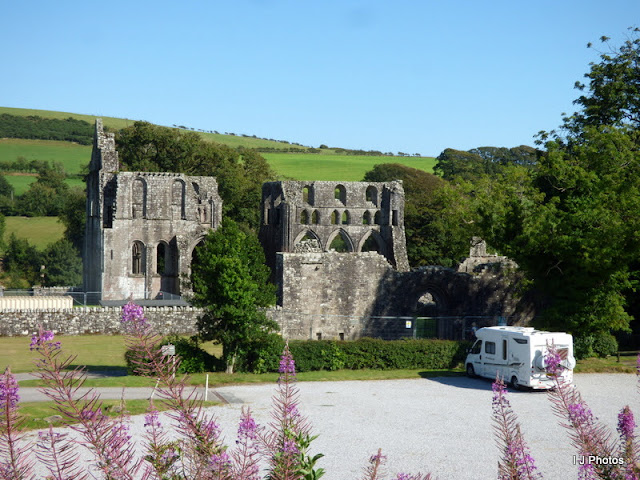 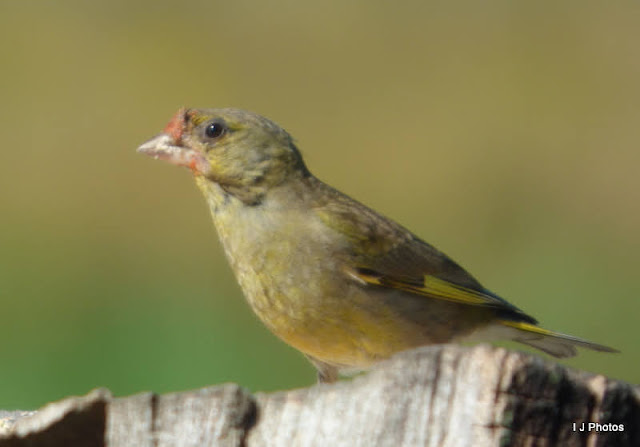 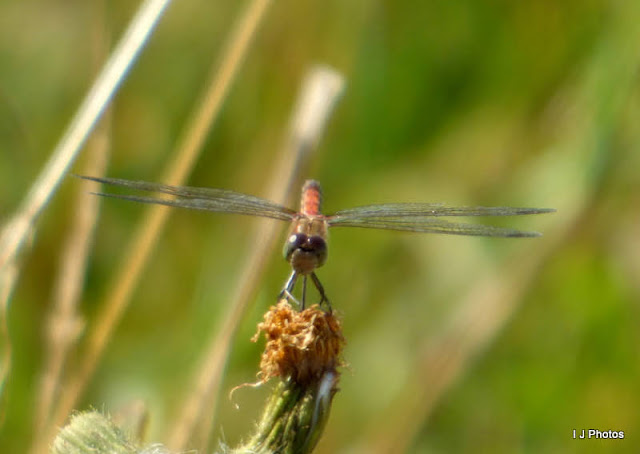 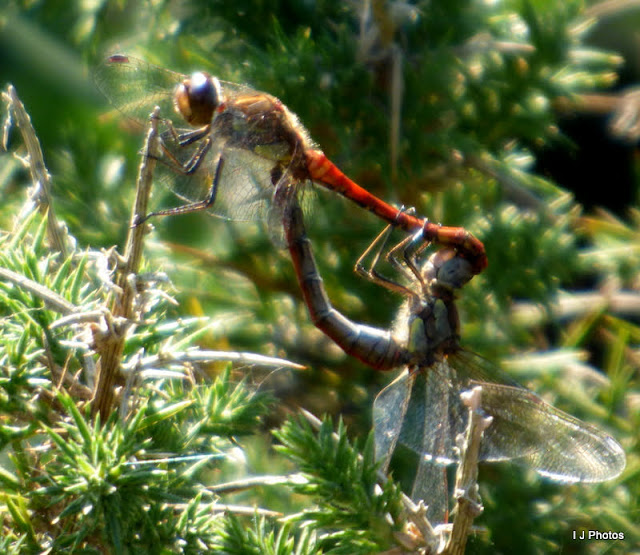 Hi Irene, I'm new to moths this year but according to my field guide, I think your moth may be a July Belle. It's found in Scotland and flight season is mid June to early August. Jo ex n/b Sarah Kate