Those that spoil it for others.

A strange rip tide phenomena occurs at a certain time around the southern Mull of Galloway. Legend has it that the phenomenon of the Nine Tides (typically a series of opposing rip tides straight after a low tide) around The Mull of Galloway were created by nine Witches trying to shipwreck a Witchfinder on his way from Ireland. Yesterday we were lucky enough to witness it. 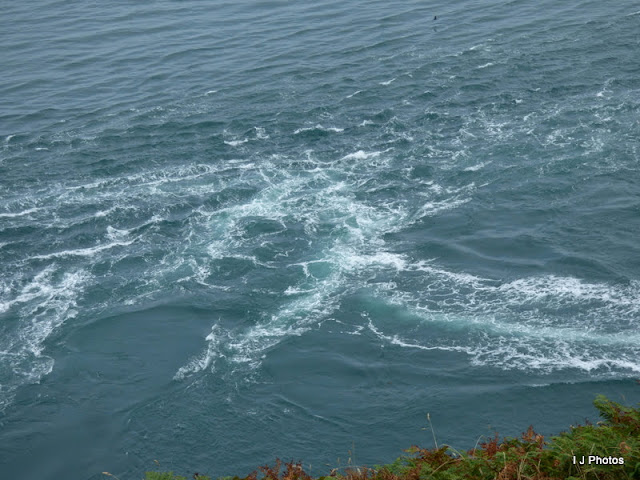 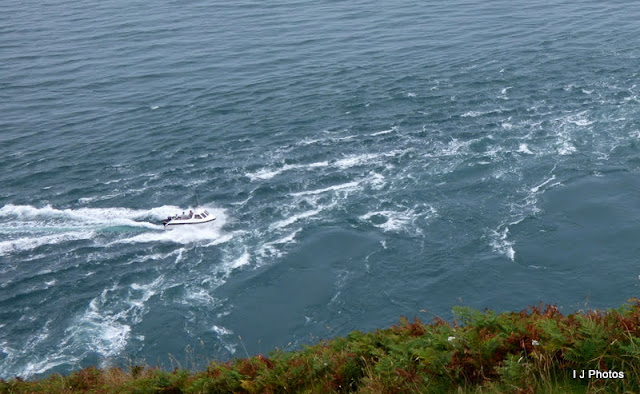 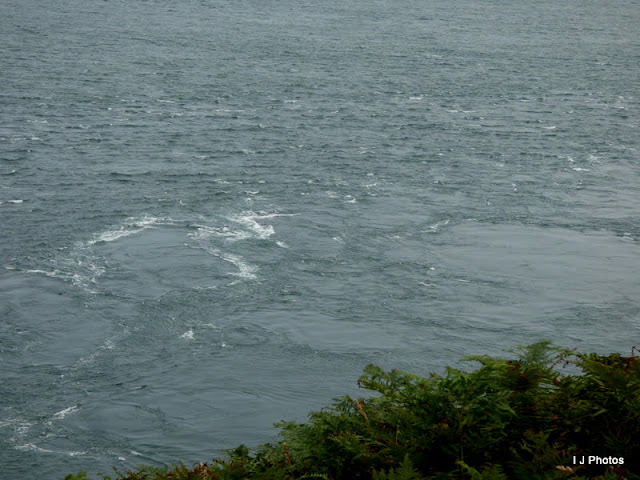 A Thunderstorm woke us at 2 am, A massive clap of thunder, so loud it had to be over head and Toffee slept through it all! Had it been our old dogs, Judy and Jade, they would have been quivering wrecks and trying desperately to hide somewhere. Anyway the thunder rumbled on for another 15 minutes and then the rain started, thankfully not torrential, a gentle drumming on the roof which lulled both of us back to sleep.

We awoke to it still raining, the plan to have breakfast at the café seemed uncertain. No dogs allowed in so outside seating only. Did we fancy eating a full English in the pouring rain? 10 am was when they opened so we took Toffee out for her walk first in the hopes it would clear up.

I must have missed the finger post yesterday, got the one at Dunnet Head, John o'Groats and the moat Northerly post last year. Would have kicked myself if I hadn't got the most Southerly post. 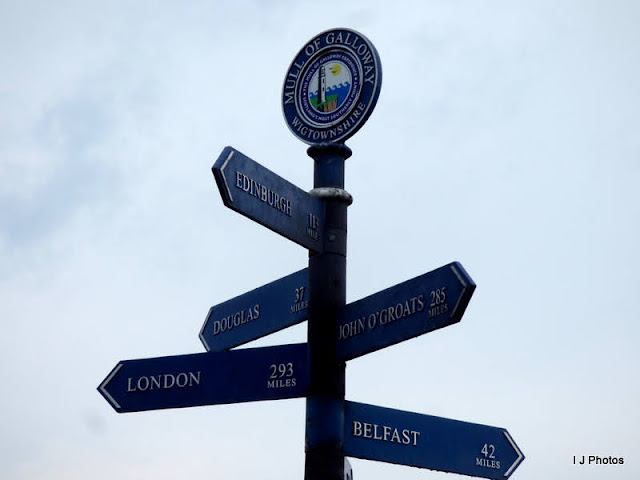 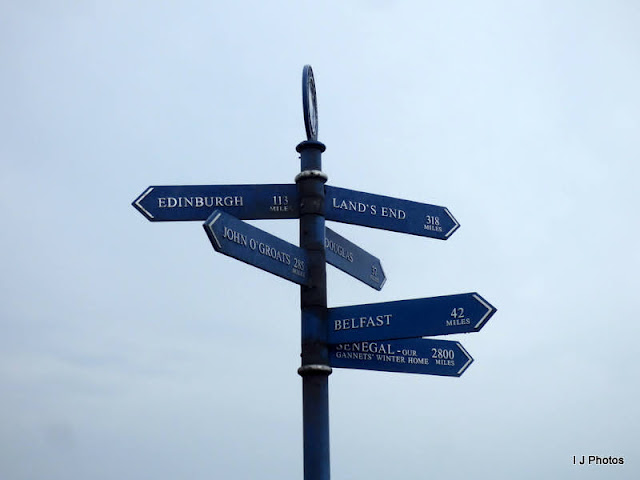 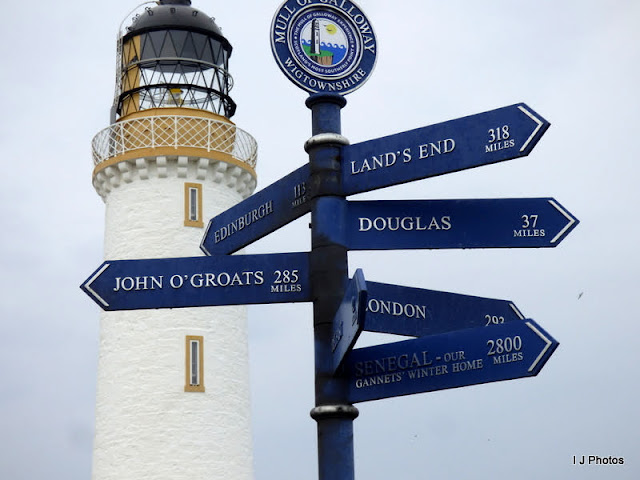 The Heather looked spectacular even though the day was dull. The colours...wow, beautiful 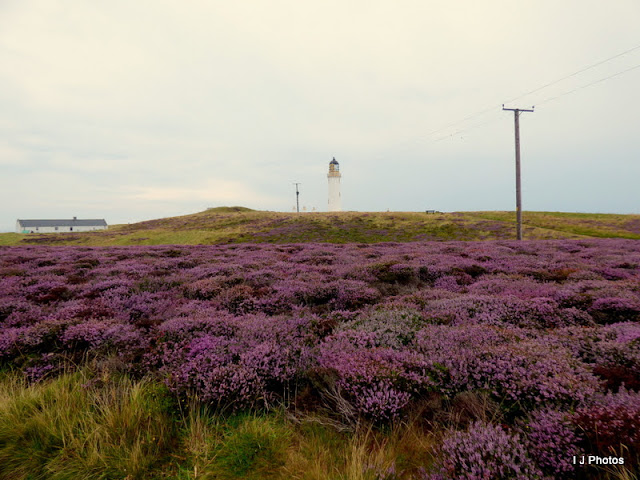 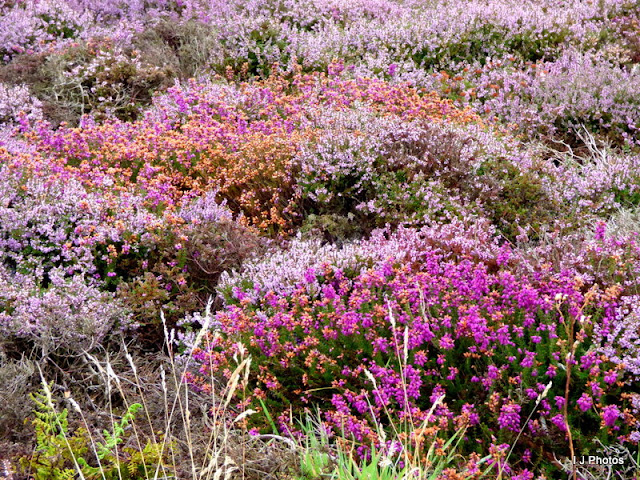 A path led us down to the Fog Horn. Remember those? On a foggy day at sea that was one of the sounds I remember. This one is still operational having been restored by the Mull of Galloway Trust but is only used on special occasions. I found this on the NLB Foghorn site

The conclusion was that audible fog signals had a significantly reduced role in the modern maritime environment, as a result of the widespread use of electronic position finding aids and radar, and the adoption of navigating bridges on many vessels. Accordingly, this review, the Board have taken the decision that all of Northern Lighthouse Board's fog signals are surplus to requirement, as such the few remaining systems have been decommissioned and the very last Scottish fog horn was switched off on 4 October 2005 at Skerryvore lighthouse. 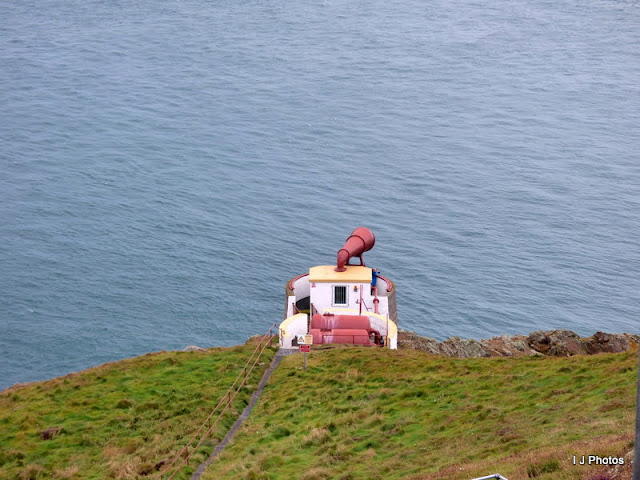 Back to the Gallie Graig café, and it was just a bit of drizzly stuff and the trusty brolly came in handy. Waterproofs were placed on wet seats, at least our derrière's would stay dry. By the time the big breakfast arrived it had almost stopped. I looked at what was on the plate, 2 slices bacon, link sausage, square sausage, fried egg, haggis, tattie scone, beans and a slice of toast.  Forgot to take a photo, but it was definitely one of the bigger breakfast I have had. And all under £8, what a bargain.

I went back to MB whilst Ian went for a tour around the lighthouse. He came back singing the praises of the keepers, the place was immaculate. He was given a bookmark and certificate for walking up 115 circular steps. including three vertical ladders! 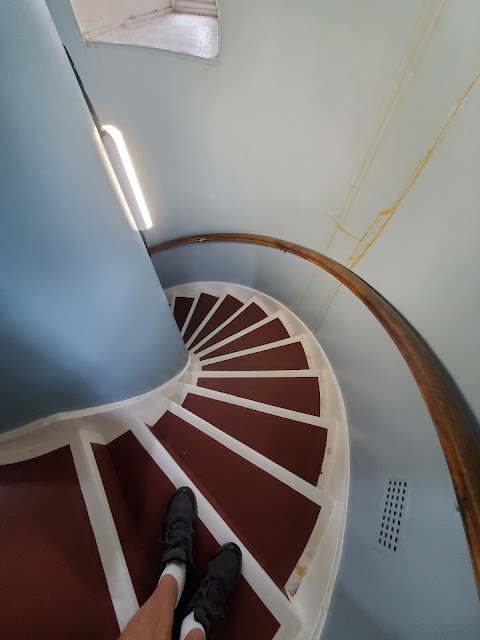 Rain once more started and so it continued for the rest of the day. As we left the car park and travelled down that single track lane, cars could be seen coming toward us. We pulled into a [passing place and waited...and waited...and waited some more. What was the problem, why weren't the cars moving forward? Ah it all became clear when cattle were seen on the road. 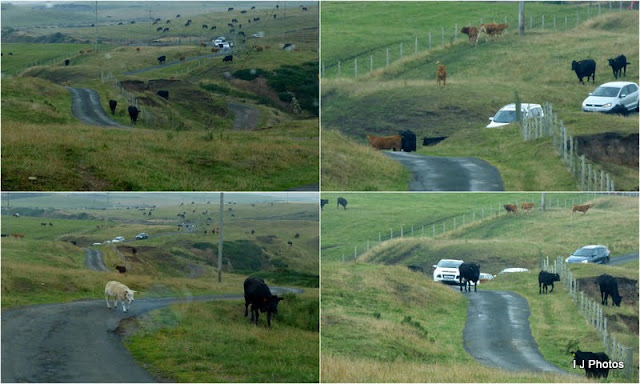 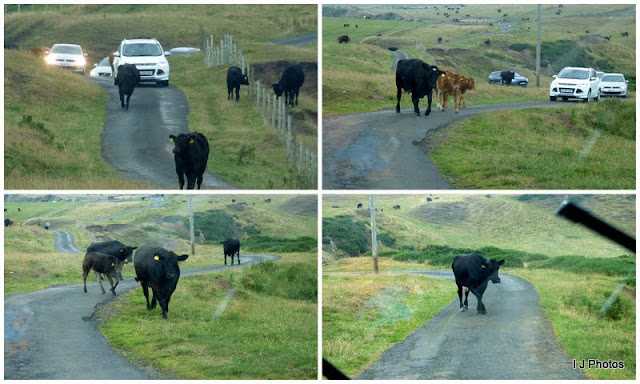 We made for Girvan and the harbour. On a Search for Sites app at we could stay overnight for £10. It had a washing machine and showers, elsan and water. We had the choice of about 6 bays, found one overlooking the water. pulled in and paid over the phone. A code was given so we could access the washing machine and showers. Went to have a look and...blast...we tried the code on the keypad several times but the door wouldn't open. A cleaner was by the toilets, so we asked if she could help. Well the news she gave was not welcome. Not only was the washing machine no longer in use due to vandalism but the showers had all been damaged as well. And not by motorhomers either. No it was travellers that had taken over the harbour car park. Police were involved and enforcement orders given. Three times the travellers moved but only by a couple of hundred yards. In the end eviction orders by the court got them to leave. This all happened just a couple of days ago. As I say...timing is everything, and we got it wrong! Still the place was worth the stay, a long beach and of course the harbour to view. Rain was still falling, not that Toffee minded she just wanted to play in the sand. 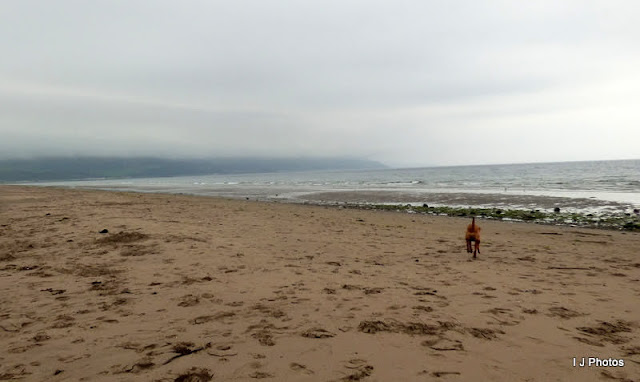 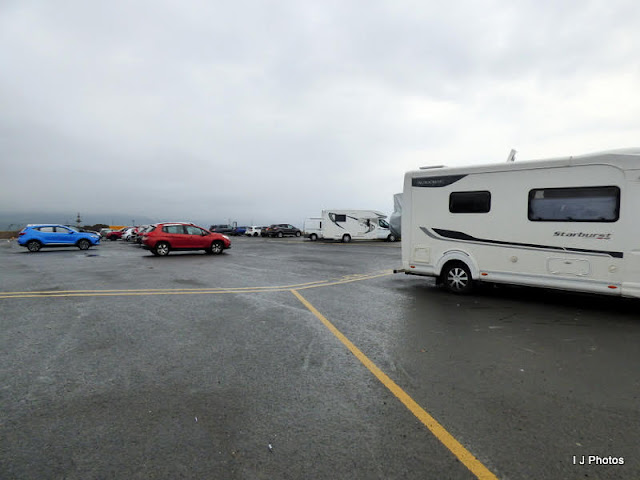 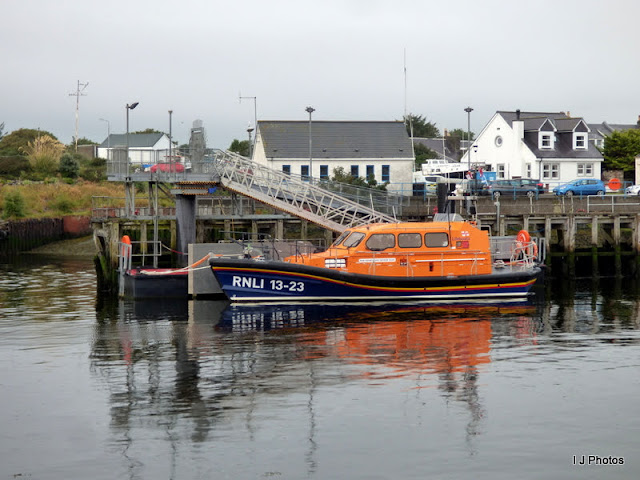 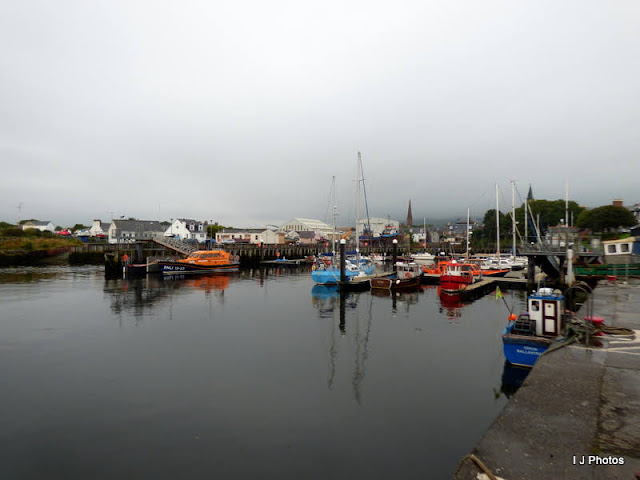 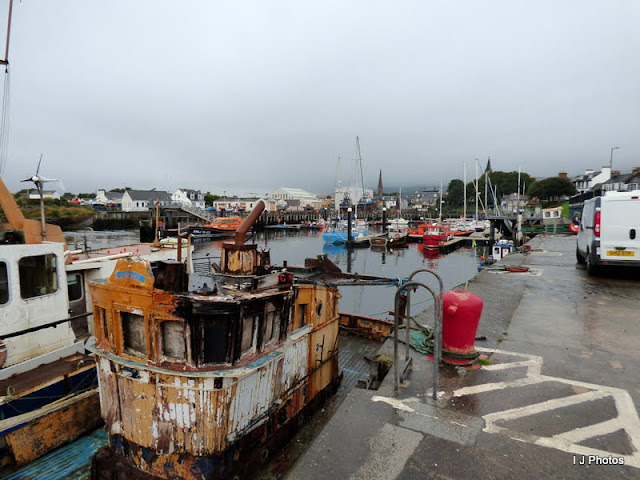 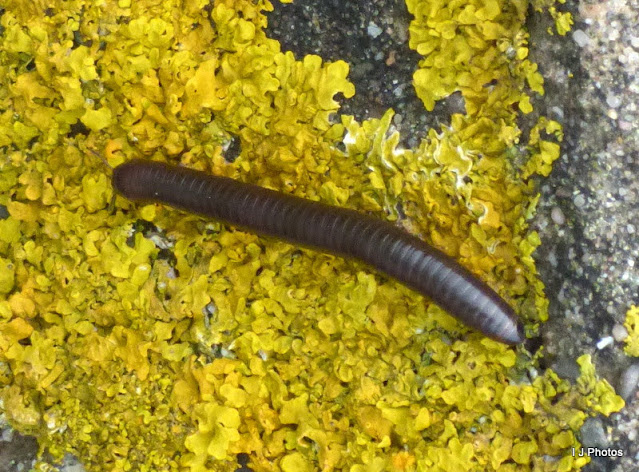 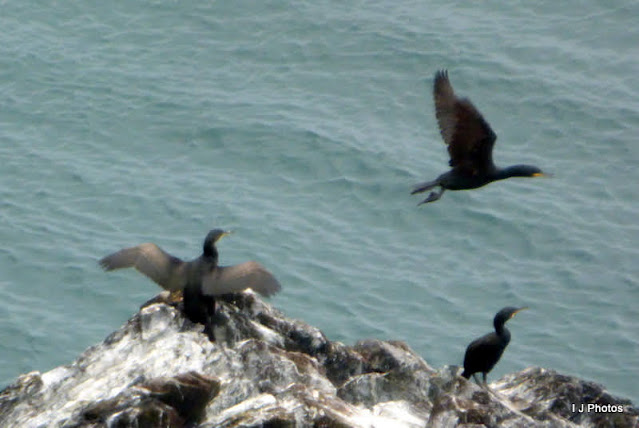 Oh and I forgot to show the sun halo yesterday. 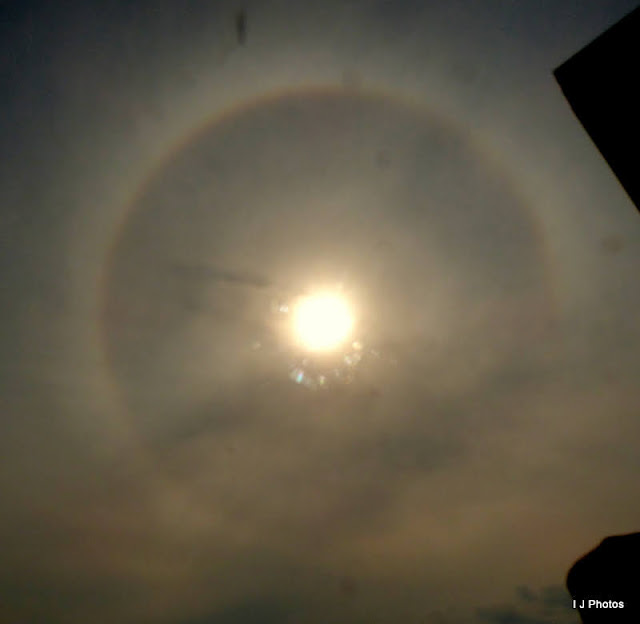 Hello Irene, you are enjoying lots of wildlife in Scotland, aren't you. Hope there's more to come. Take a look at Silver Y as an alternative suggestion for your moth - it's a day flier. Jo ex Sarah Kate

Interesting blog, well done Ian for visiting the lighthouse and ascending all those steps to get a pic at the top.
I presume that boat survived the converging rip tides, as they looked very powerful.
We have freecamped at Girvan, just beyond the harbour overlooking the sea, in the large car park that lorries also use overnight. This was during lockdown and we got some excellent take away fish and chips from the nearby shop, we knew it was good as the queue was about 1/4 mile long!
Your unusual breakfast sounded good, we have bought 'square sausages' oop there as they fit in a sandwich perfectly.
Shame about 'travellers' who seem to leave rubbish and destuction where ever they go, we have seen this in several places.
Ann Makemson xx