What a complete farce!

Talk about complete balls up today, and all because C&RT had put misleading information on their website.

For once we made a unanimous decision (unheard of from us!) to first phone C&RT and ask if we can have passage past the stoppage on the Caldon, to which they confirmed we could, and then set off early, do the biz at the facilities at Etruria and make sure we were at bridge 16, Milton, before the deadline.

First locks on the Caldon was the staircase and both were set just right. Bottom lock empty and top lock full. 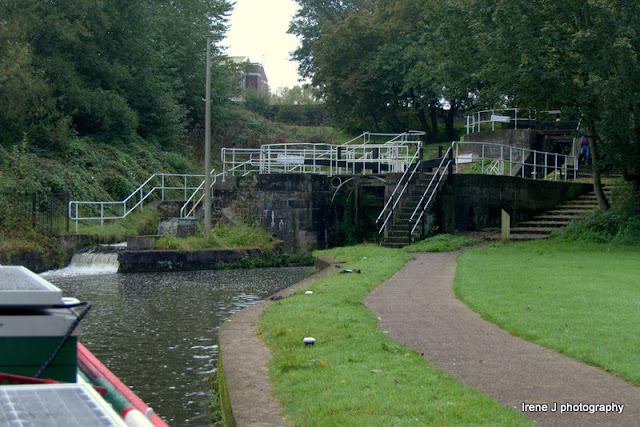 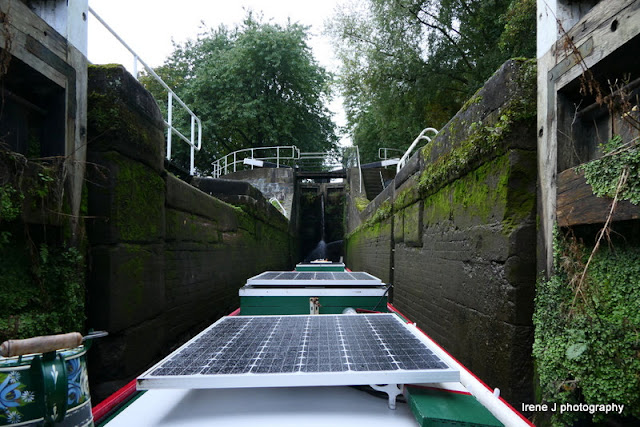 The top section was not the most attractive part of the canal, but we did notice many of the old factories were being demolished, presumably part of a regeneration program. It didn't get much better once free of the built-up area. In fact, I would say that it almost looked to have gone into decline. Offside vegetation, as well as towpath vegetation, all left to encroach the waterway and l wondered if or when any dredging had taken place so shallow parts were! 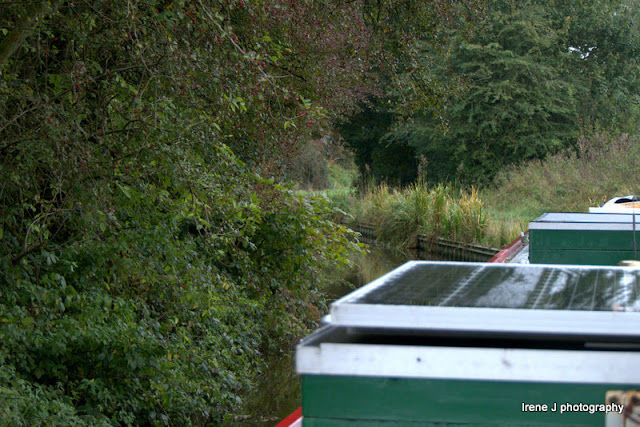 A low bridge almost stopped me in my tracks. Would the chimney fit under? Then there was the electronically operated road lift bridge to do, (a crt key was needed to operate this) and then somehow do a slalom move around two workboats, one almost in the centre of the canal. This was due to C&RT putting in piling, but why oh why couldn't they get the piling in a straight line? Then there was a burnt-out boat, a local told us it had been left for months and one day the youths came along and set fire to it. All this hindered our progress and therefore took an age to reach our destination. We were very thankful then that we had got underway by 8 am this morning. 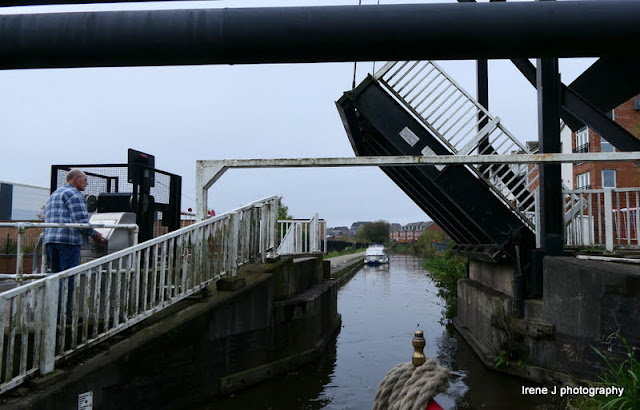 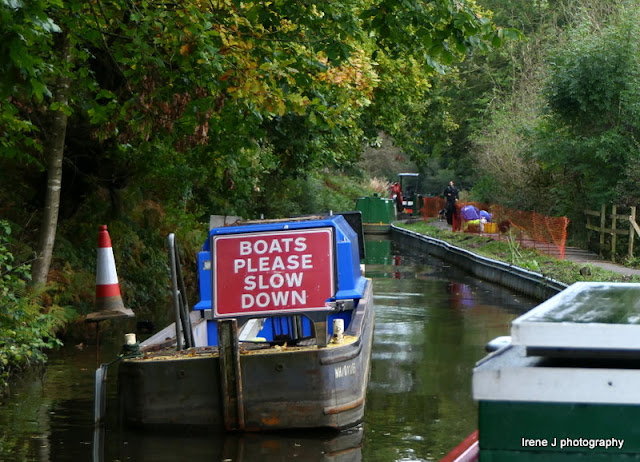 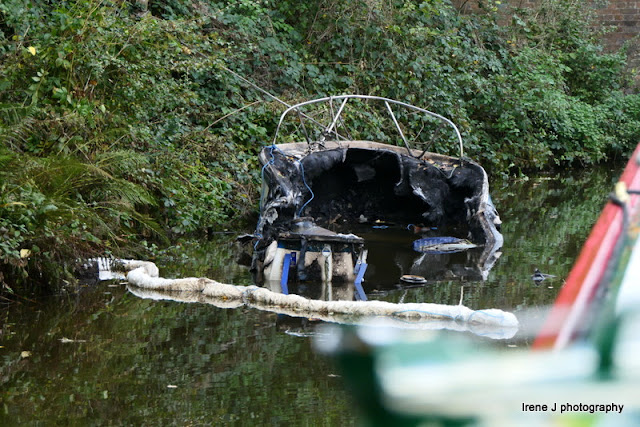 Eventually, we reached where the closure was. Just beyond the winding hole was where the problem lay. The canal narrows to a boat width, probably a lift bridge was once in use here. On the offside and into the cutting was a huge hole in the wall. Booms were across the water to stop boat traffic and we managed to utilise the only bit of cladding available to secure FS. Then we waited, time was 11.15am. 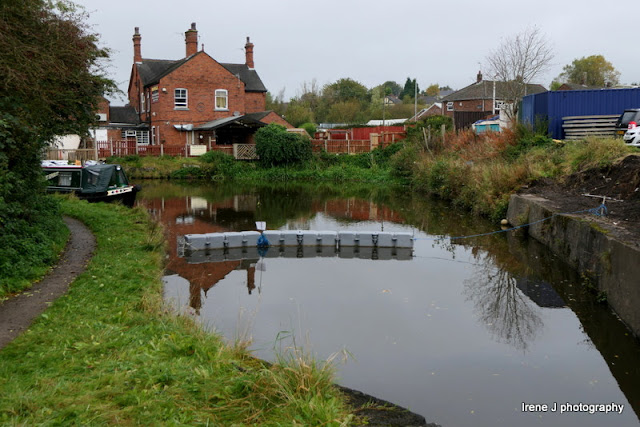 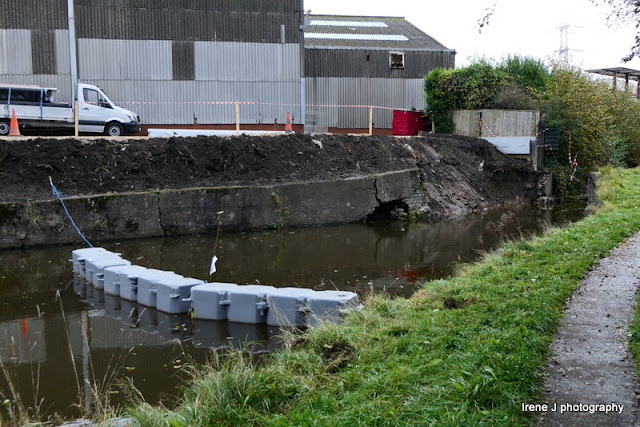 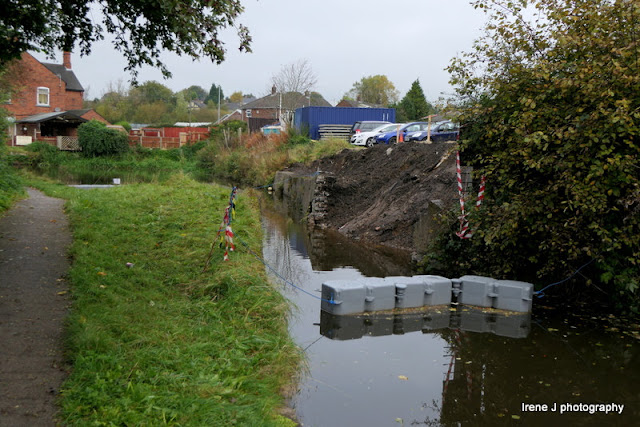 11.45 and two C&RT bods turn up. Ian goes out to say we were ready for the passage through. "Have you got a home mooring on the Caldon?" the C&RT bod asked.  "No," said Ian, "We had planned to spend a week or so on the canal." "Well, we can't let you through then" he stated."Now hang on a minute" Ian retorted, "That is not what the lady in the office told us this morning when we phoned and where does it say on the stoppage notice that only  boats with a home mooring were allowed up?"

(This was what was posted several days ago)

We are currently allowing assisted passage through this section on a Monday and Friday only at midday. We will work on increasing passage as we put in more safety measures and review.
Thank you for you cooperation.

There was not a lot that guy could say so he does no more than get straight onto the phone with his boss where he relayed our dissatisfaction and then passed the phone over to Ian. It was eventually agreed that we could go through if we so wished but there would be no guarantee that we could get back. What that meant was if the wall collapses completely then basically we would be 'locked in' which would stuff us up completely. So although we got our way in the end (by agreeing to let us through C&RT basically acknowledged that they had screwed up) we thought it best to turn back.

The booms were removed, not for us but because two boats were due to come off the Caldon. 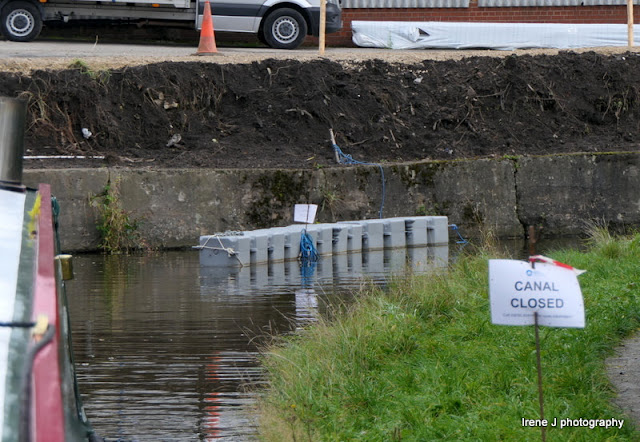 On the return journey, we were lucky enough to see two Kingfishers. 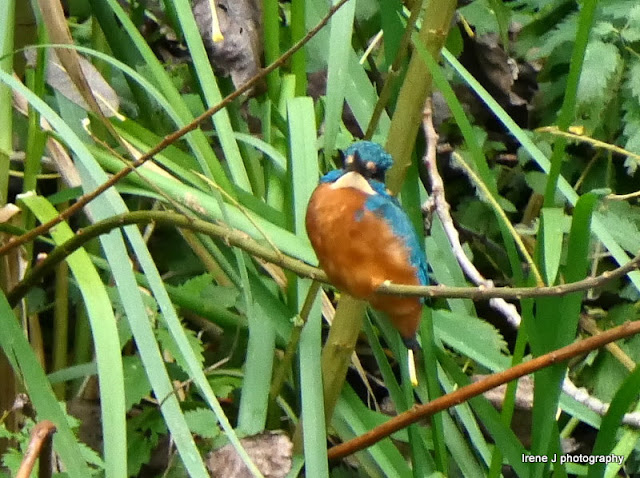 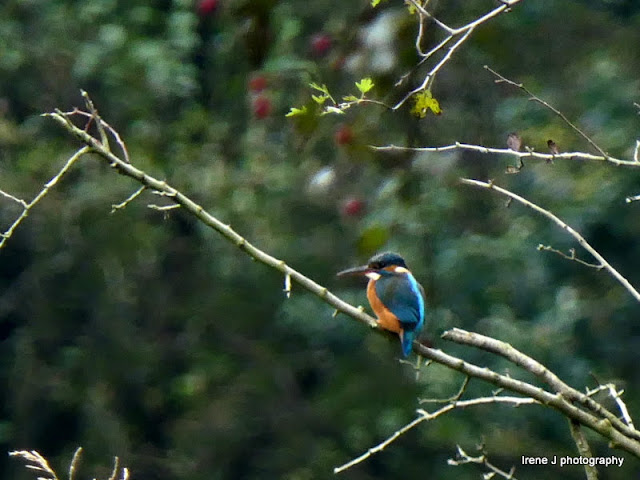 Made the left turn back onto the T&M to find a boat already waiting at the lock. But then a touch of Deja vu (see earlier post) because at the lock was Rob the Lock (see my sidebar) He was once again helping a lone boater down the locks and promised to lift a paddle for us on the way down. Even with his help we never got moored before the rain started. No way did we fancy stopping in Stoke. I did offer to remain with Ian as he had taken the tiller, but on the condition that I could bring out the brolly. He declined my offer as he hated the thought of it dripping all over him. He is not one for sheltering under it, so I left him to get wet! 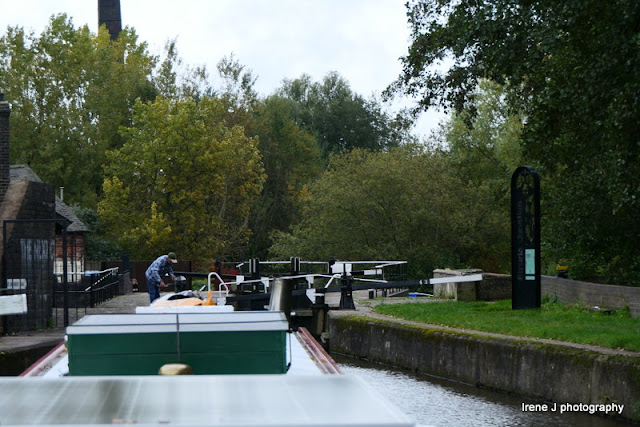 Posted by Ian and Irene Jameison at 5:21 pm

I have spoken to CRT as I am moored up at Endon at the moment-hoping to com through the stoppage on Friday-fingers crossed!!

Hi Richard, You should be allowed through and hopefully, the wall will stay in one piece. Gand good luck and we will also keep fingers crossed. Xx