Cor..look at.their big uns! And it pays to let go of the rope.

Sleep....over rated if you ask me! Didn't get much last night even though I had consumed nearly a bottle of the red stuff. We had gone out for a meal at the Bridge Inn with Carol and Alan (previous owners of Nb Marmaduke) great company as always and fab food to make the evening complete. But before we left I was still uneasy about leaving the boat after the little darlings had thrown those stones so we left a light on just so it would look like someone was on board. The trouble with that was the lack of battery power now that we had unplugged from the mains. Our travel pack and alternator were still at Cox's. Good job we have LED's. Anyway, a combination of worry, the noise from Toten yard (trains) and the cars on the A52 (don't people have beds to go to?) made for a disturbed night.

This morning at first light we were both up. We felt most uncomfortable staying on the lock landing overnight and both of us were eager to see if any damage had been done by those stones. Gosh, we got off lightly considering. No damage to the solar panels and only two small gouges on the cabin top. 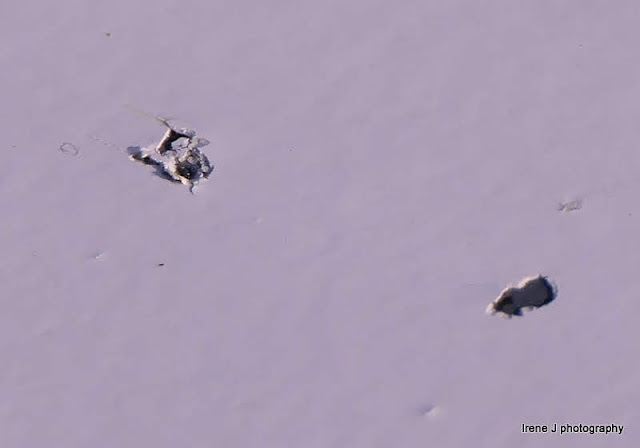 By the time breakfast was done and dusted it was nearly 8 am. We then decided that I would do the journey up to the Mill on FS while Ian drove the car to each lock getting it ready for my arrival.

What a lovely day to do the final cruise of this year, hardly a breath of wind as I set off. 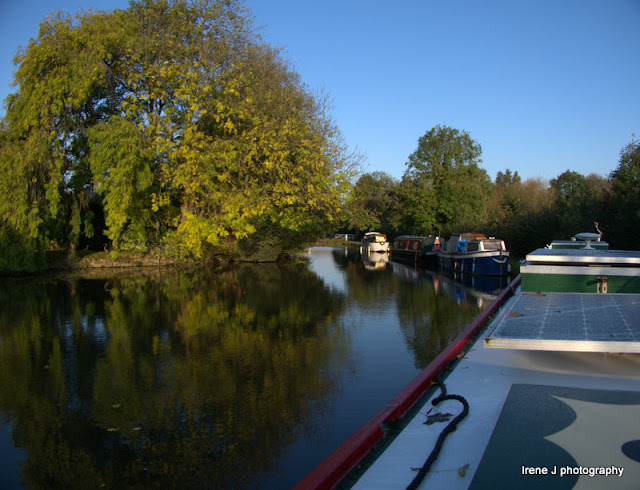 The first lock, Pasture lock, and Ian was already there waiting. 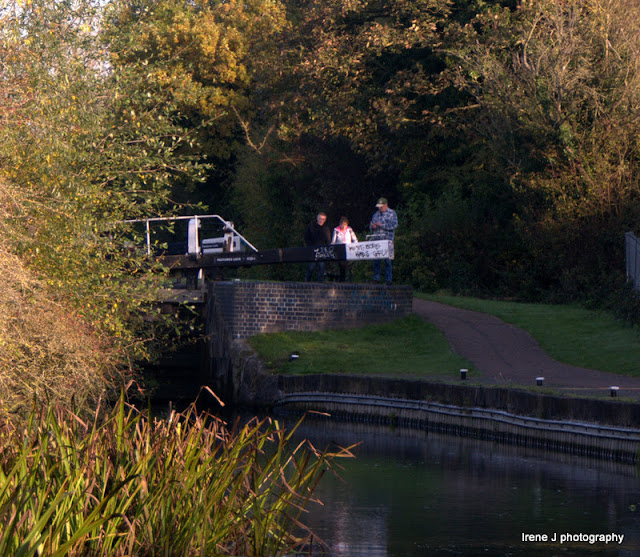 Have I mentioned the low bridges on the approach to some of the locks on the Erewash? Due to the contour of the bridge, only one side can be accessed safely. This means two boats can not go in side by side and one would have to push across once in the lock allowing the other boat to enter. Not a problem for us as a single boat going up but oh, I forgot to remove the chimney and only by going in at an angle did I manage to keep the chimney in one piece. 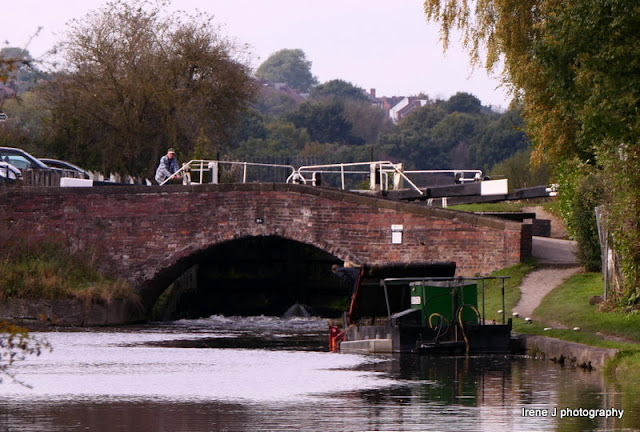 Wow, remember the post of our going through a jungle when we left? Well looks like the emails sent to C&RT had done the trick.

This back in early September 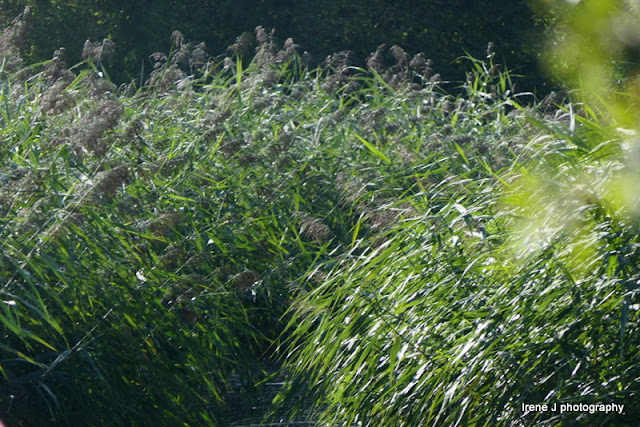 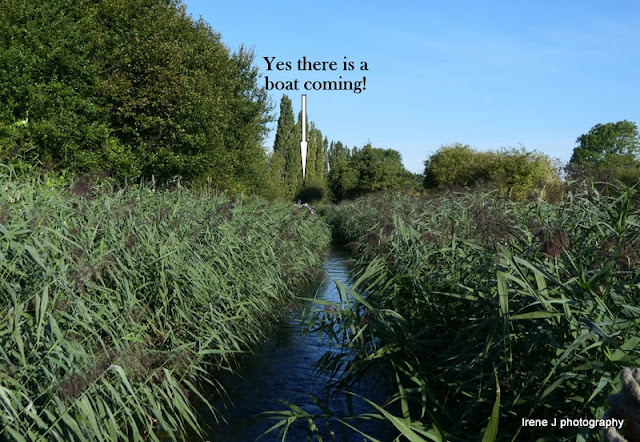 And this today taken at almost the same place. 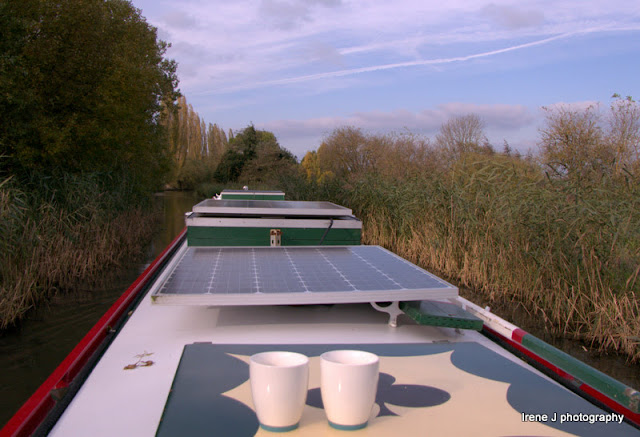 And here was the means of the reed removal. 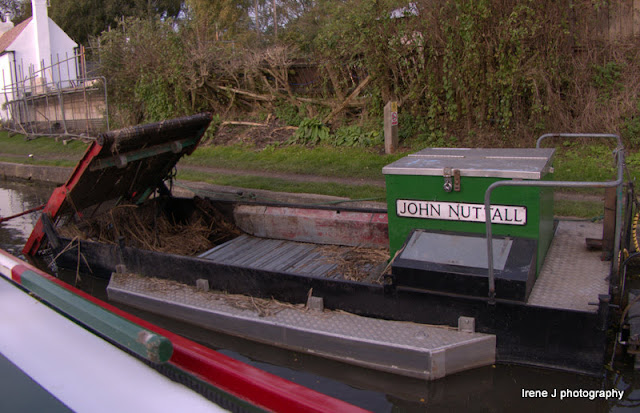 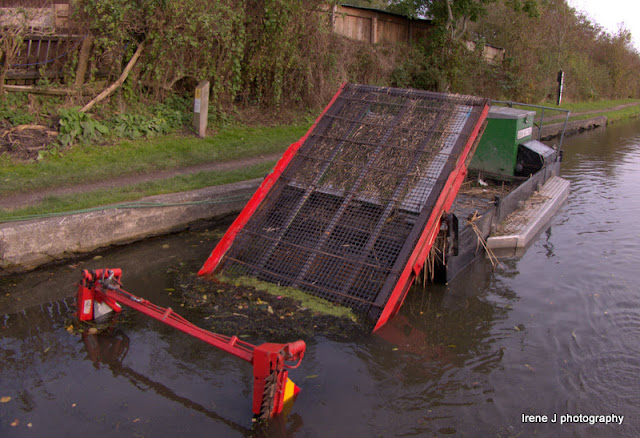 Back at Langley and what was most noticeable was the diesel spillage lying on the water surface in Langley Bridge Lock. No sign of it above the lock in the basin so had something been poured in by hooligans? We also noticed two boats moored by the swing bridge. Now, one we knew about because we have done a mooring swap with them. Jim and Jen on Dire Straits will take our mooring when we head off to New Zealand and Australia for 4 months at the back end of December (We take theirs in the basin) but we hadn't realised that Ernie had also brought his boat out of the basin and was now blocking the passage through. All we could do was to moor by the facilities and because we are ECP&DA members, plug into the pump house electrics so at least we could have power. I went to wind in readiness for when we do go into the basin and Ernie came out to give a hand. Ian was also at the winding point and a good job too considering what happened next. Being on the stern, in control of FS and unable to see what was happening, I had no idea that Ernie had grabbed the bow rope to aid my turn. I started the reverse and next thing I know Ian was madly signalling to me that there was a 'man overboard'! Oh no...apparently the rope had snagged and with my reversing and him not letting go of the rope, in he went! Luckily Ian was around to fish him out but wallet and phone, although not lost, was now soaking wet. We all laughed it off but the guilt I felt was awful, so much so that we offered to try a drying method mentioned by Jenny of Dire Straits. Place phone in a shallow dish, cover with rice and leave for a couple of days. I just hope it works! 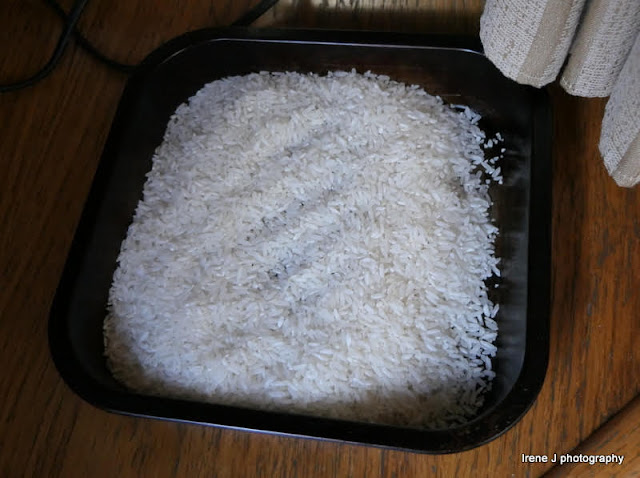 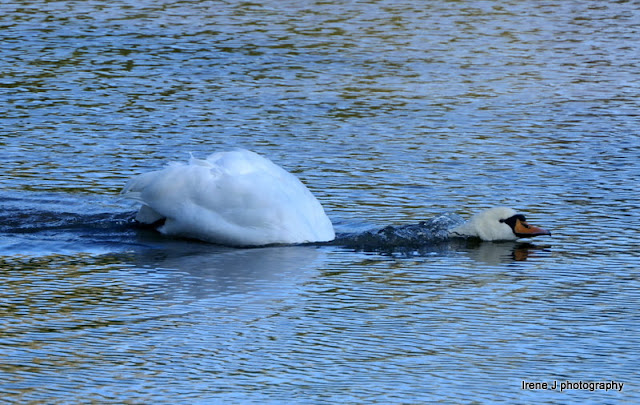 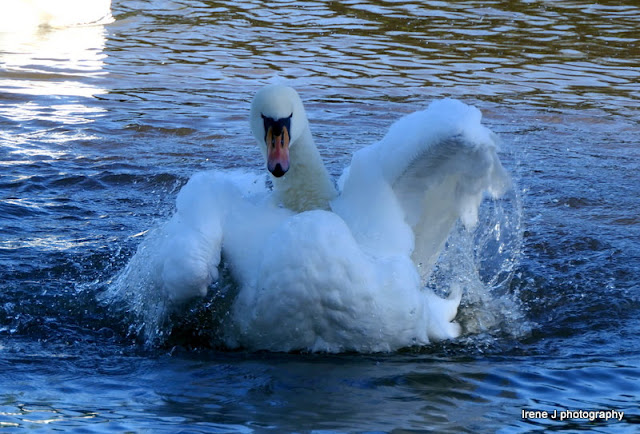 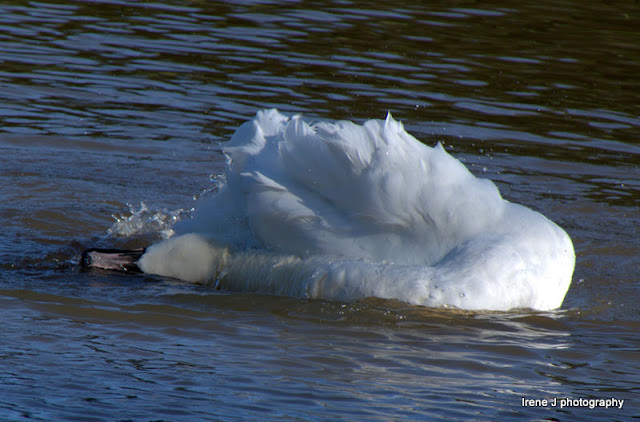 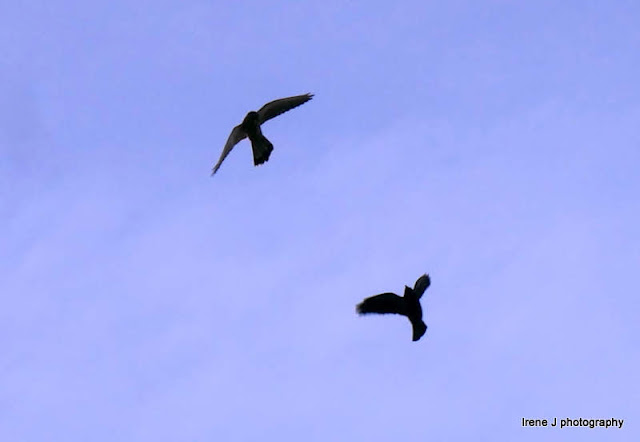 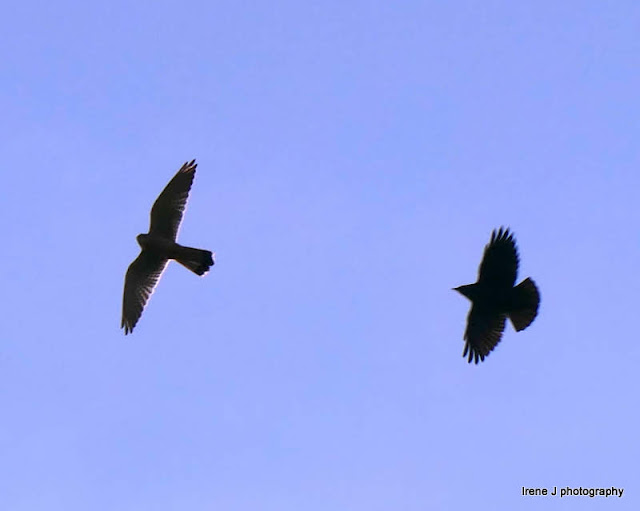 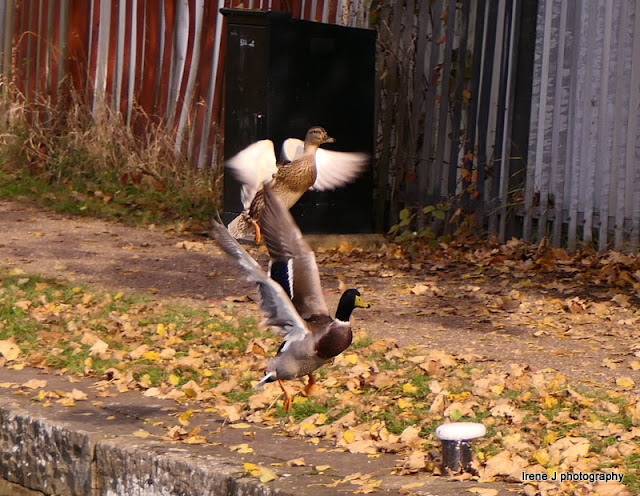 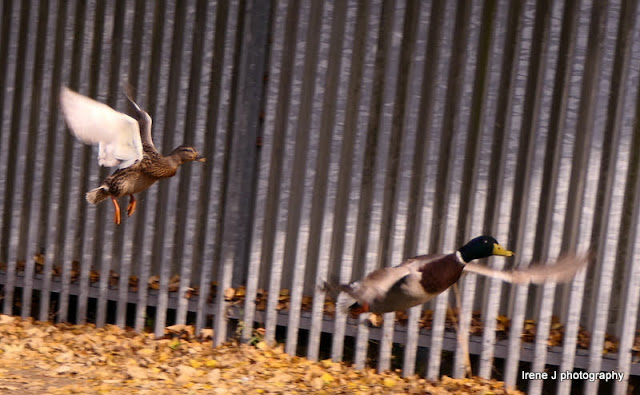 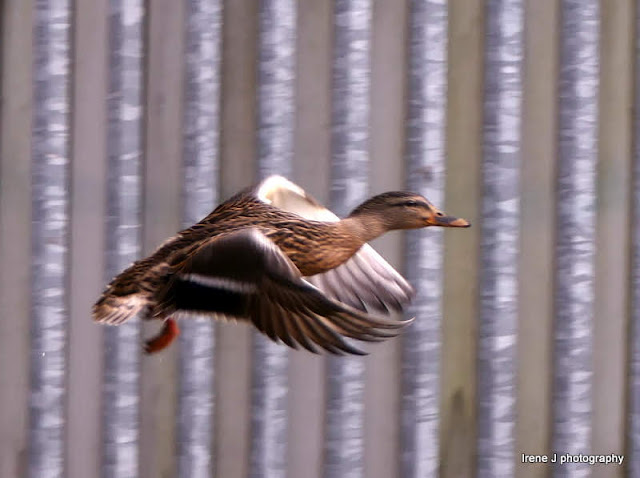 I looked at these two photos and thought a caption might be appropriate but couldn't think of one. Any ideas? 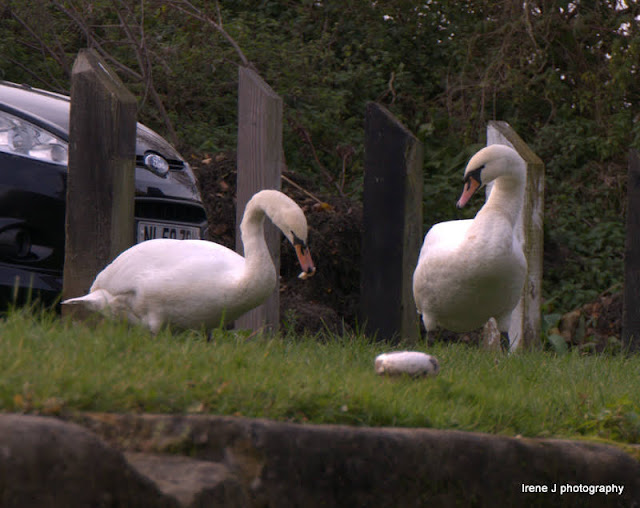 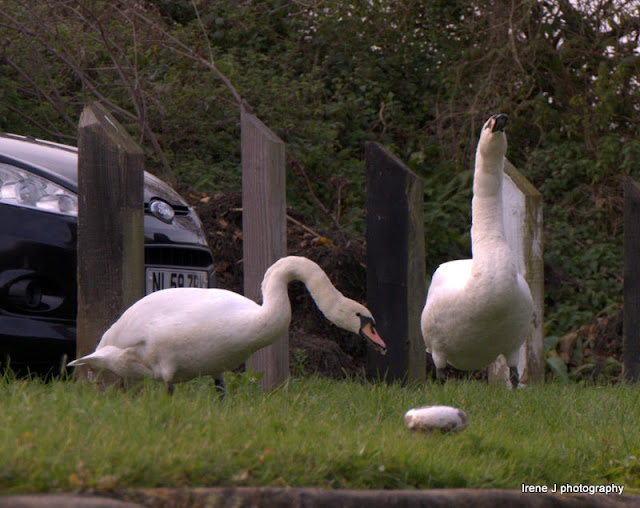