That took a humungous effort

Autumn cruising, something special when the elements are kind and today was perfect cruising day. Yes the temperature had dropped and we have now put the secondary film across the windows, not to act as double glazing but because it almost cuts out all the condensation. The only downside is the inability to open the hopper windows but with the side hatch not covered and the Houdini still openable, we can still get ventilation if needed.

Only had two locks to do today, the nearest being but a mile away. As we left for the first lock, this was Middlewich moorings, far cry from yesterday when we arrived. 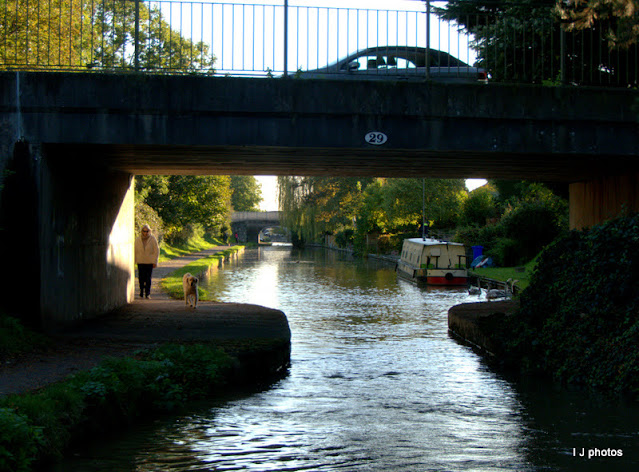 Heading toward Stanthorne lock the site of the breach in 2018 was seen. Boats were left stranded, one being extremely lucky not to be washed away. To read about how it happened HERE  This photo taken from CRT website 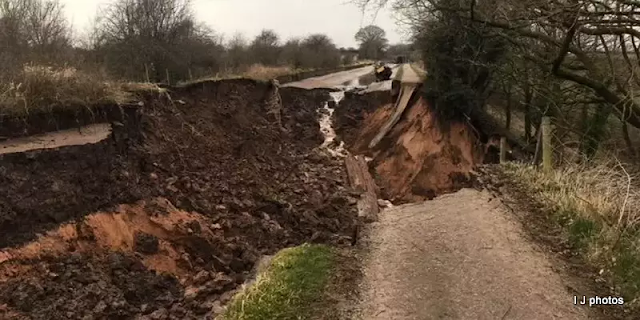 And this is how it looks today. 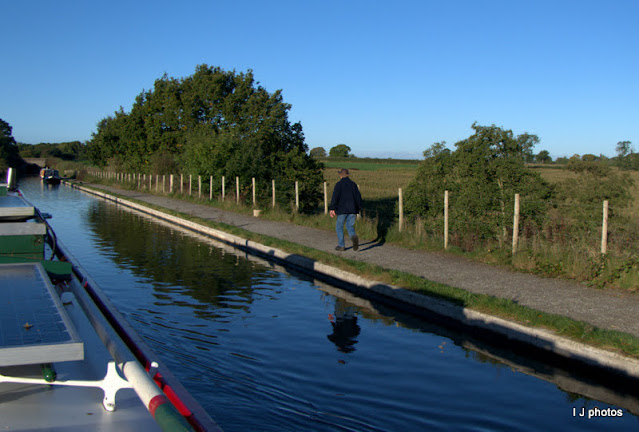 More hire boats out than ever today from at least 8 different holiday hire companies, in fact there were very few private boats on the move. As usual its great fun watching their antics. But I must never forget that this was me 40 years ago. In fact somehow I managed to wedge Windsor, a 70ft boat, (I never forgot the first-ever hire boat from Anglo Welsh) right across the canal affectingly closing navigation for quite a while.  Like the boat in the photo I steered the wrong way and panicked. It took the 5 crew on board, 2 on the bow, 2 on the stern with boat poles and one on the bank with the bow rope to get me free! 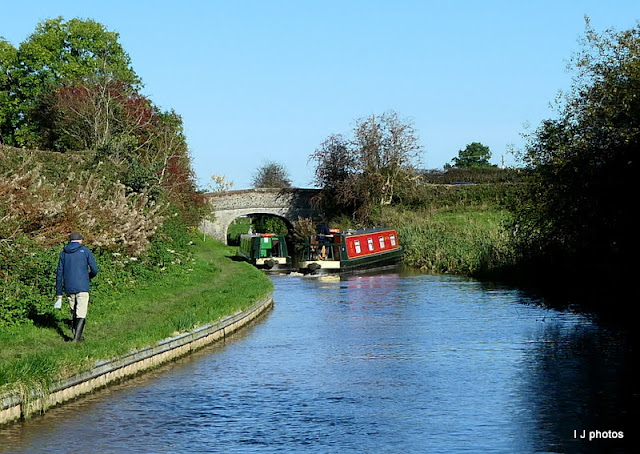 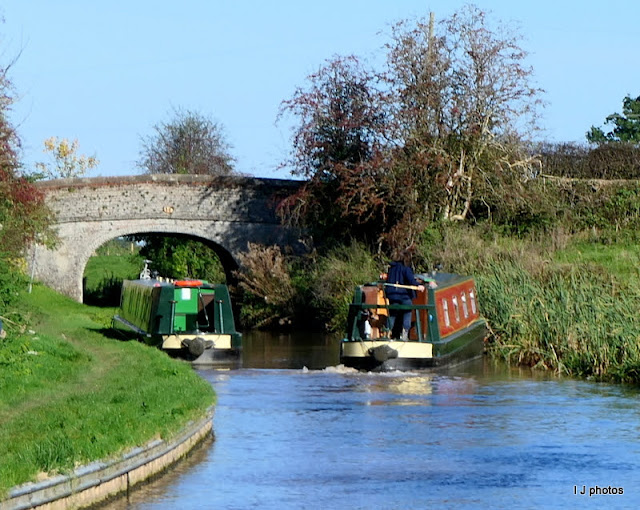 With the glorious cloudless blue sky came another problem. Sun quite low on the horizon and looking directly into the sun equals difficulty in seeing what's coming. This photo shows why. 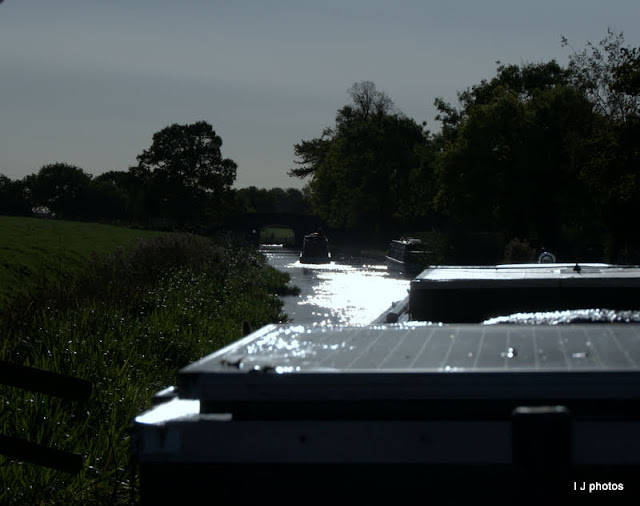 It wasn't all plain sailing though, because at Minshall Lock I got caught out by the wind. Strong and gusty and not the easiest to control FS. I dropped Ian off well before the lock and then tried to 'hold out' to save going onto the landing. But Ian signalled that there was a boat waiting to descend so I headed in. Well, that was fun trying to get there. That wind took hold of FS and pushed her toward the opposite bank...sideways! Somehow I got the bow to the concrete, swung the stern so I could get off, grabbed the center rope and jumped off, FS's bow was again making a break for the far side. Only wrapping the rope around the bollard and holding on for grim death could I get her to respond. Took another humungous effort to bring her back to the side. It was times like these that I wished Ian would glance back to see if I was alright. My fault though, because in the past when he has come back to help push the boat away from the bank, I have told him quite forcefully that I was quite capable of doing it myself!

Ian wanted to check the batteries, we seem to have low voltage every morning, so stopping after this lock on a long stretch of moorings was the idyll place. Fishing here was terrible. It's the first day I haven't had even a bite. Giving up I went in search of sloes. Two bottles of cheap Gin was bought in readiness and I got lucky by bridge 7.  There are now three bottles prepared, 2 of Gin and a half bottle of Vodka found in the back of the drink's cupboard. I added that to the leftover Gin so it will be interested to see how it turns out. 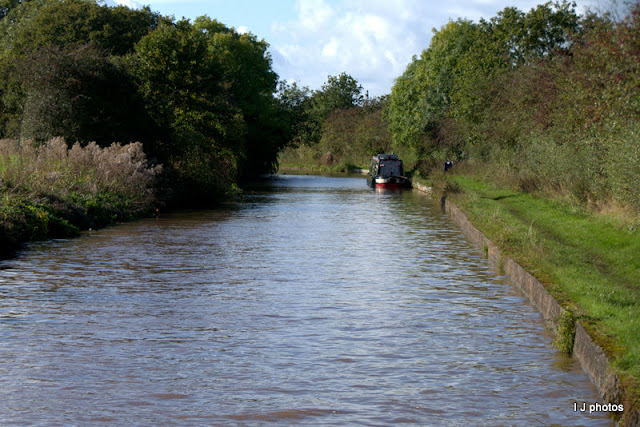 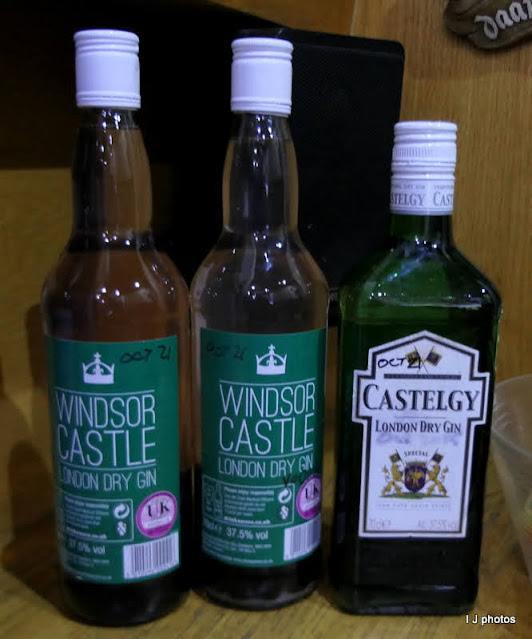 A question which someone may be able to answer about wind turbines on boats. We have thought about getting one when static but what sort. The long poled propeller type or this design seen on the photo below. Any thoughts? 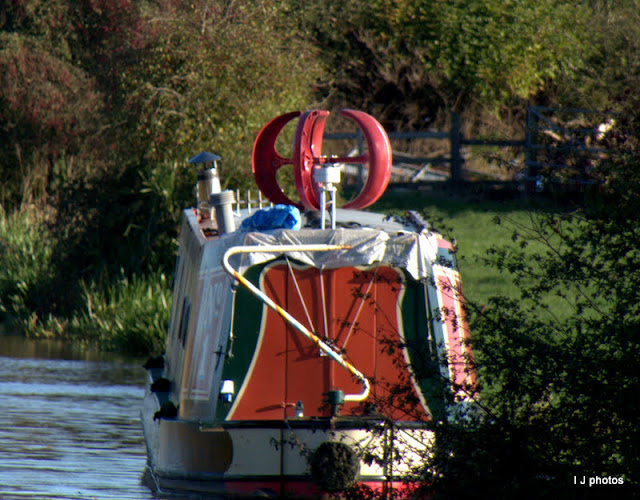 And finally some wildlife photos to show, 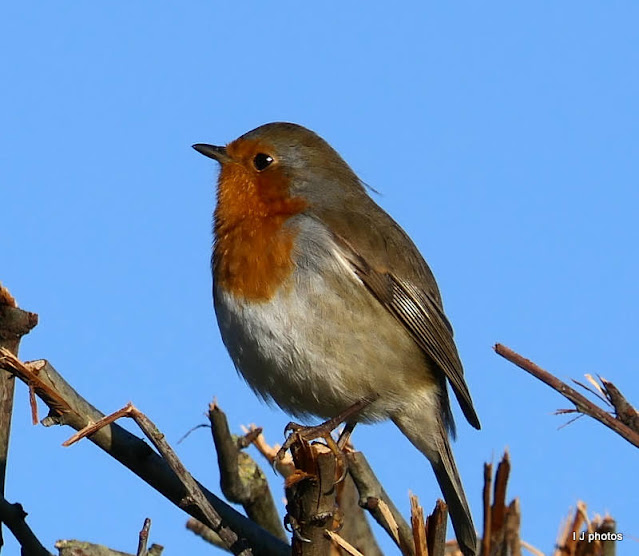 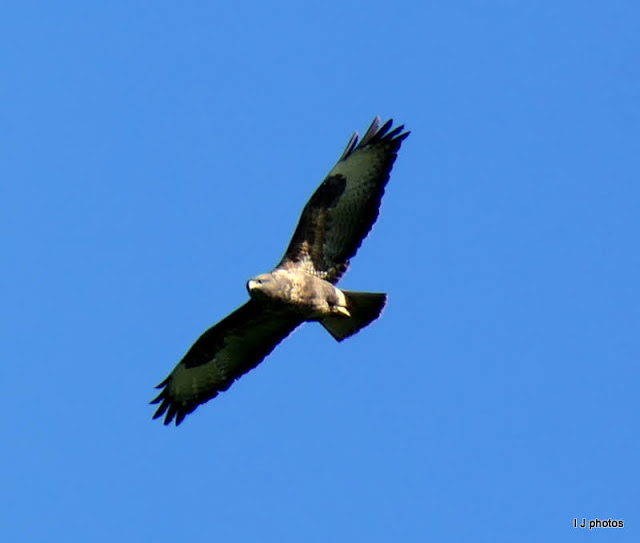 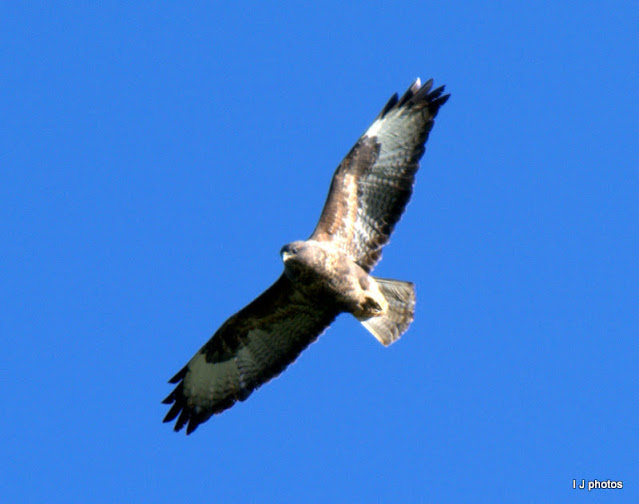 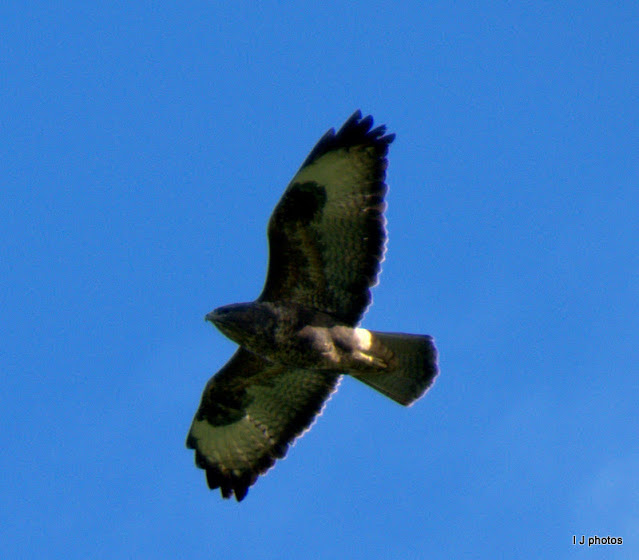 Posted by Ian and Irene Jameison at 5:44 pm

Our first hire boat was 70' too - we'd done it a couple of times before with friends, and we only thought about how many beds we needed - friends or kids!
Best wishes
Debby

I have heard from several boaters that, if you mount the pole on the boat there is constant vibration running throughout the boat whenever the wind is strong enough to generate any useful electricity. They ones big enough to generate any useful electricity are too large to store anywhere on board. If you are using it at your permanent mooring then you need to fix it to the ground, not the boat, and as high as possible, but not on the flight path of any birds.

Thanks for the info, Paul. I think we will rule out a pole.

It certainly threw us in at the deep end, Debbie. If one can learn to steer a 70 footer then anything smaller is a breeze. Xx

I looked the spec up for a boater last week, you get full output from a 600Watt one with a wind speed of just 59 mph

The general consensus seems to be very adverse to such turbines - better to spend the money on solar and batteries! See https://www.canalworld.net/forums/index.php?/topic/113018-wind-turbine/ for a discussion

Thanks, Mike. We seem to be veering away from these turbines. I think we will stick to solar after all.

Brian and Diana, Thanks for looking that up. We have decided not to go with wind generators after all.