I may have to deal with an irate dad!

Firstly an apology to all you arachnophobes, I have included a spider capturing its prey right at the end of this post so maybe it's best if you skipped the wildlife section.

5.45 am and I became aware that Ian was moving about. Concerned that he was unwell, he soon put my mind at rest about that, but what had woken him was an intermittent knocking noise coming from somewhere in the living area. Strongest in the middle it became evident that it was coming from the cabin top. The only thing up there (apart from coal) was the satellite. The Snipe gizmo box is situated under the TV in a small cupboard and opening the door, noticed the lights were flashing trying to locate the satellite again. Groan....we obviously have a problem but from where, and one that may not be able to rectify. Funnily enough the receiver was still working and switching on the TV we had a perfect signal. Whilst watching the news, 20 minutes into the program and all the boat's electrics failed. Blimey Ian moved that quick it was uncanny. He deduced it was an invertor problem and all tied up with the fridge again so another worry to contend with. One thing he did notice was our batteries were down to 74%, the lowest it has been for a long time, although he doesn't think this caused the problem. He also mentioned the invertor could be 'under voltaged' (???), something that he will have to explore.

Even though we had been up since 5.45am, we didn't get underway until well after 10.30am. A Skype call to my brother in Oz had been arranged. 9 am our time, 7pm theirs. By the time we had told them all our news and they theirs (the biggest being they were finally out of a 4-month of lock down) we had been chatting for an hour and fifteen minutes. Could job the Skype video calls are free!

Trentham lock was full and this was the case with all but the last. Deep locks, every one of them and so slow in emptying and filling, seemed to take forever. And that journey between Trentham lock and Stoke bottom lock was endless. Wouldn't mind if this 4 mile section was interesting but apart from passing the Wedgwood factory most was devoid of any decent views, although plenty of the old pottery factories were very much in evidence. Shame they had been allowed to go to rack and ruin. 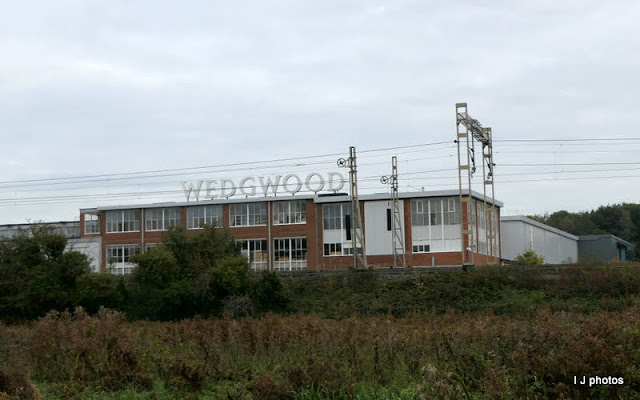 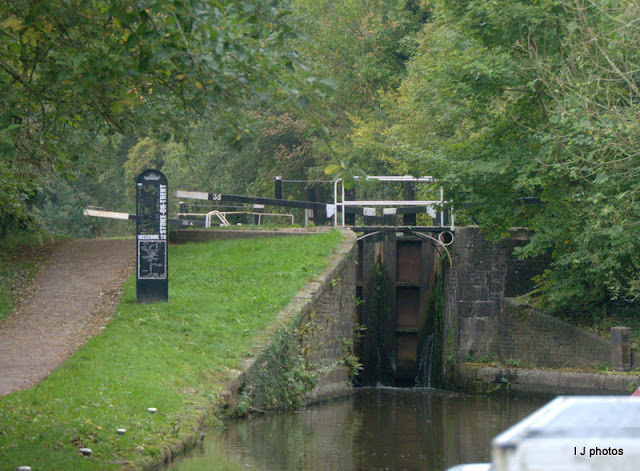 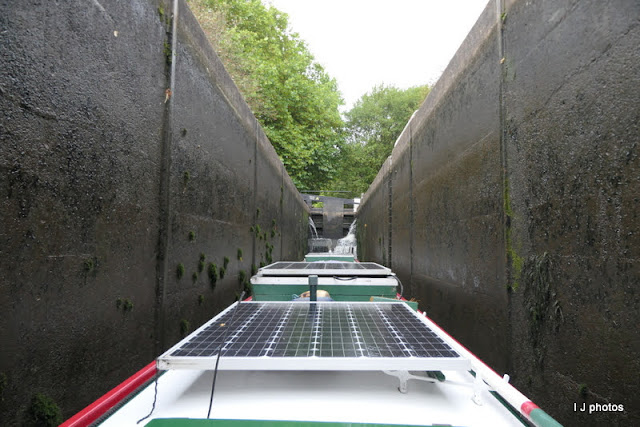 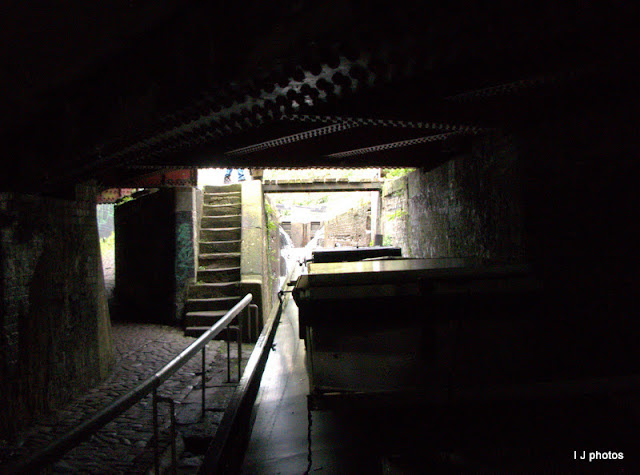 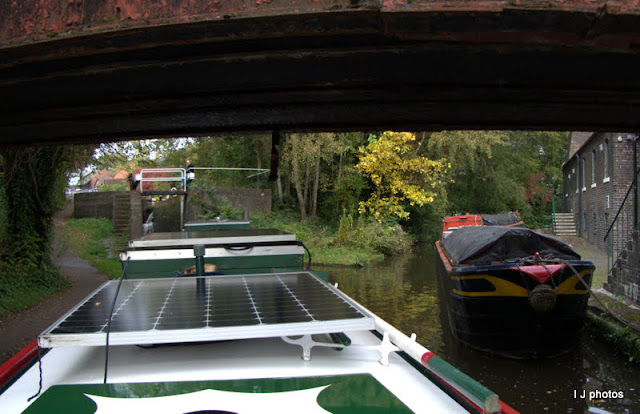 Last but one lock in the flight and we met a boat descending.The chap mentioned the last lock was leaking like a sieve and sure enough, Ian could see water coming from the gap in the gates. My turn to ascend and Ian raised one paddle and then walked up to the top lock to empty that. No sooner was I on my way to the top lock when I noticed more water pouring out from that bottom gate. "I thought you had raised the paddle" I asked. He took one look and took off along the towpath. Turns out a hire boat had arrived, didn't check to see if another boat was below, closed the raised paddle and promptly started to fill it for themselves. With the lock only quarter full, and with a very apologetic lady, the lock was quickly emptied again. 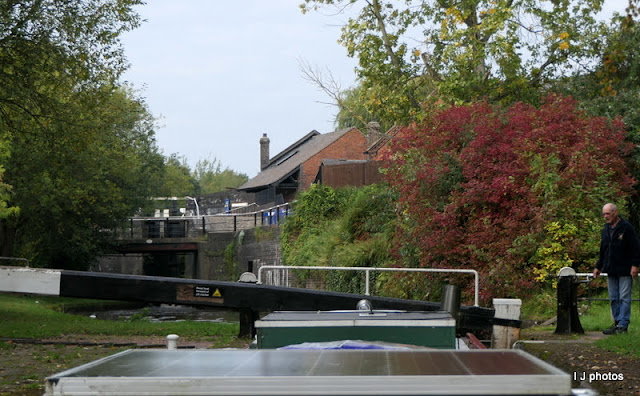 At Westport Lake we took the very first ringed mooring. 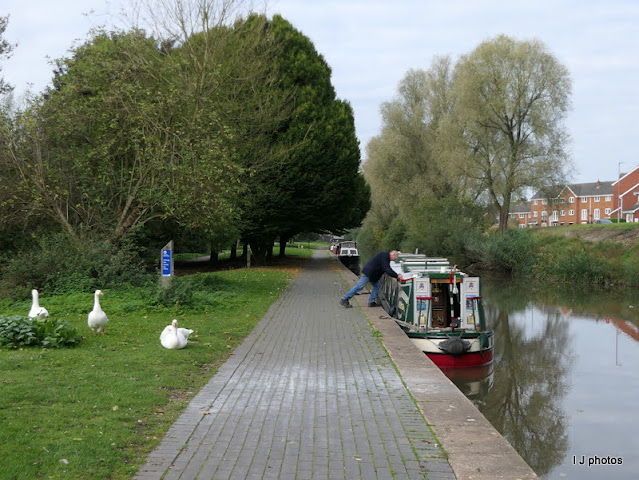 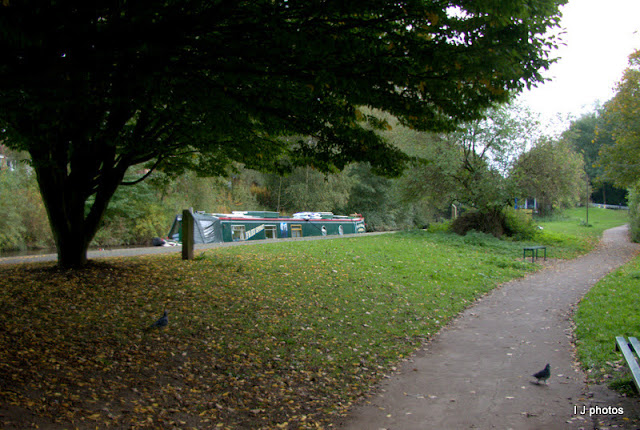 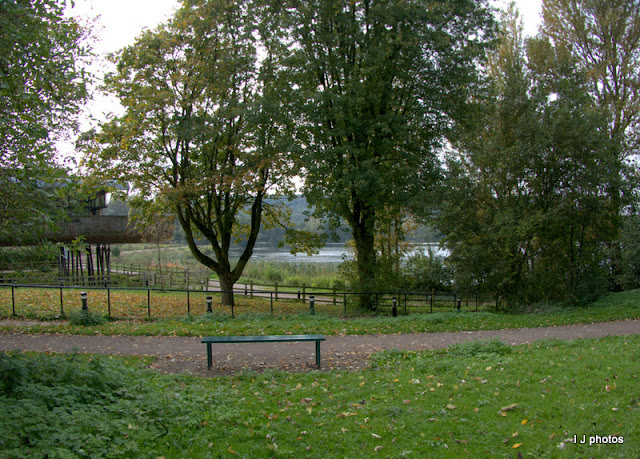 Next boat along was a small plastic cruiser and on board, three children. Yep just the kids, the eldest probably no more than 10 or 11 and one of them kept blowing the horn. It all looked very suspect and when we noticed them untying the boat and dragging it toward us, we got even more concerned. At one point as it headed for a collision, well I couldn't stand back any longer so out I went. Twice I asked if this was their boat and twice they replied yes. They had been sent by their dad to paint the roof and having done one side, wanted to do the other. "No painting by our boat" I told them sternly. In the end I pulled the cruiser back to the next ring, made it secure and told them to leave it alone! I've been waiting for an irate dad to appear to tell me off. So far no one as arrived. 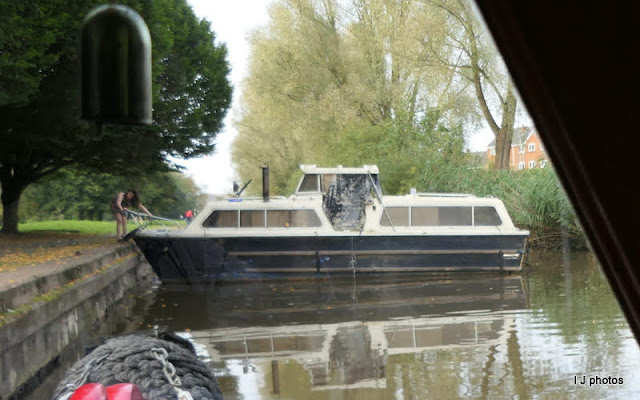 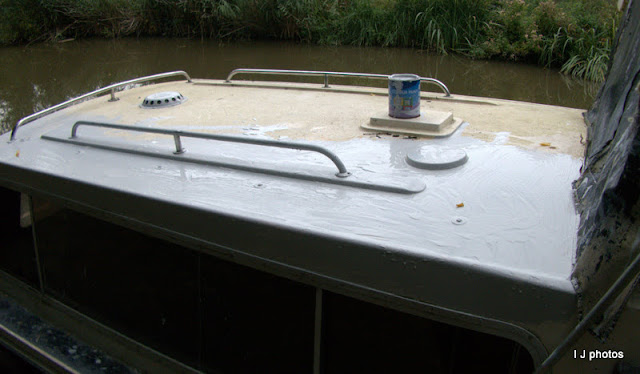 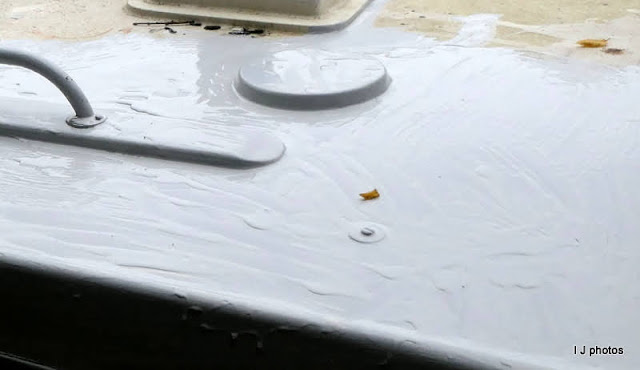 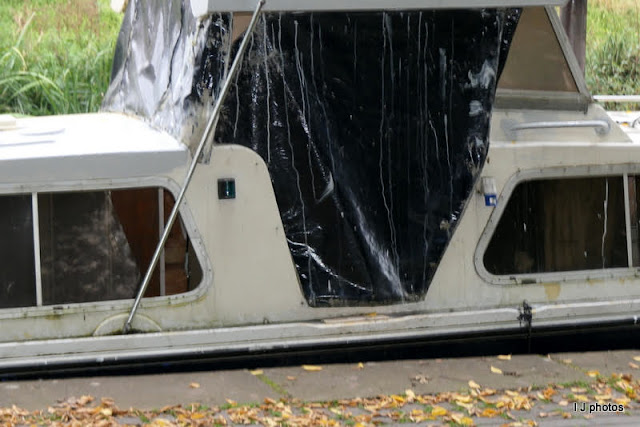 And this made us laugh. A Black Prince hire boat missed the bridge ole and ended up in the trees. I was too late to capture the collision but judging by the amount of foliage on the bow, they made a good job of it! 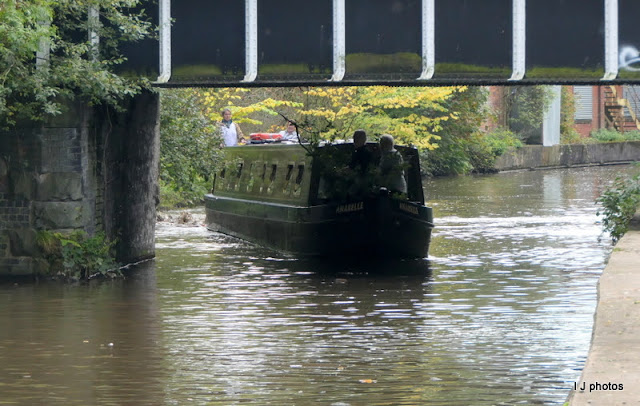 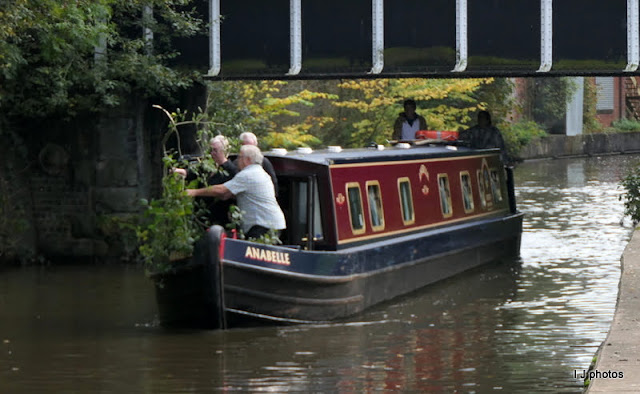 And now to the wildlife photos. 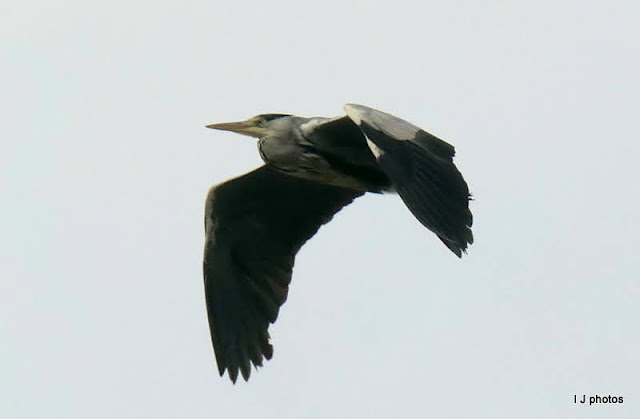 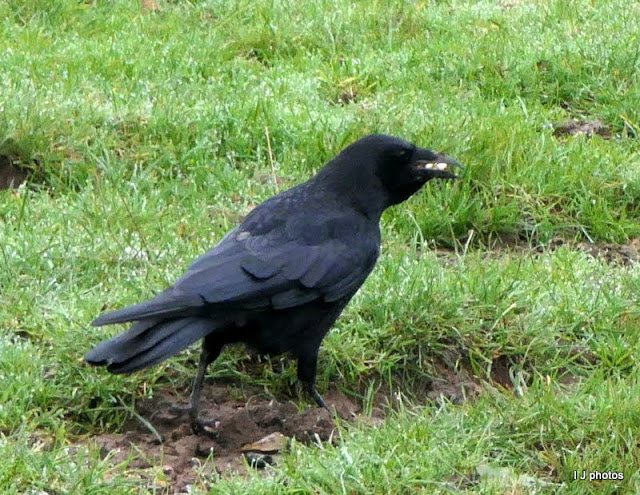 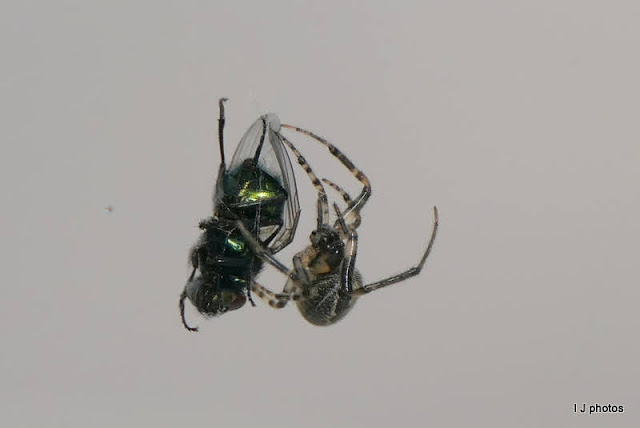 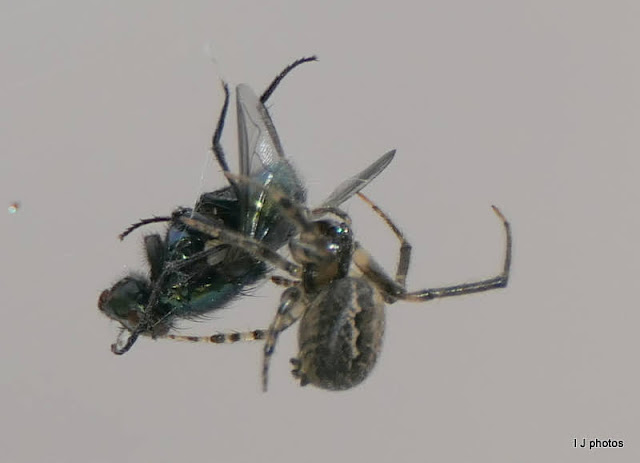 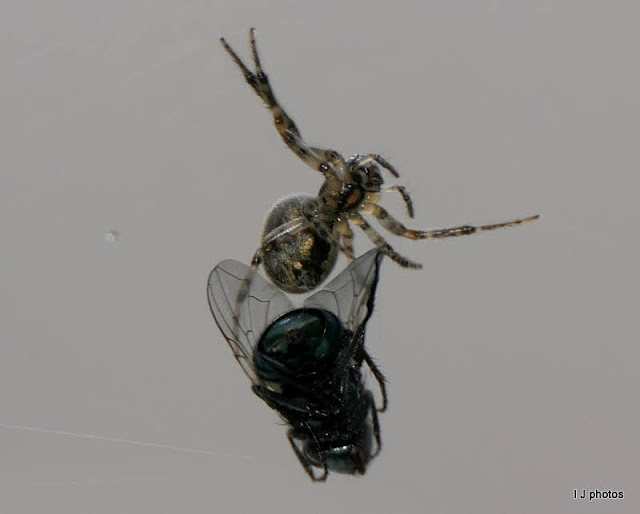 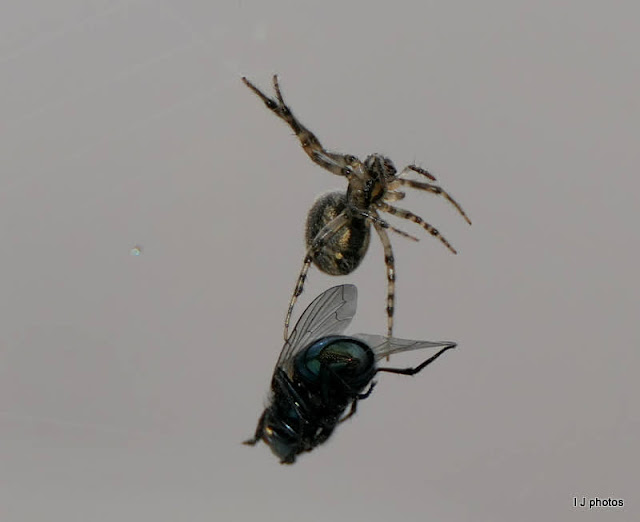 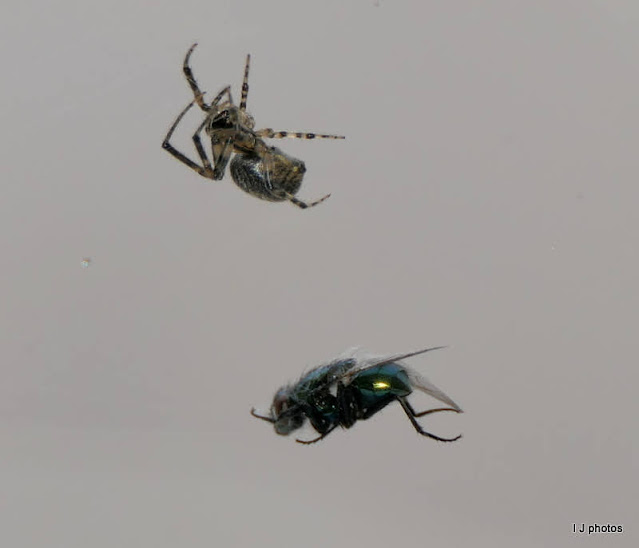 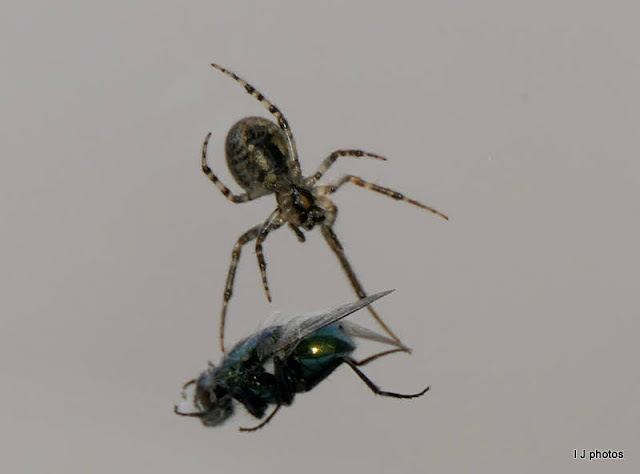 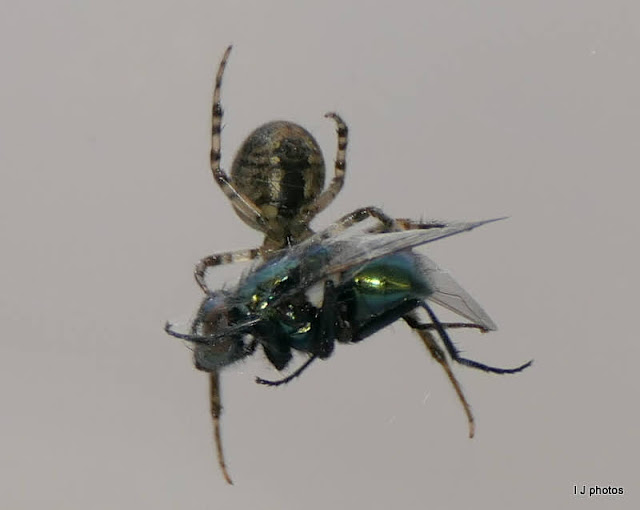 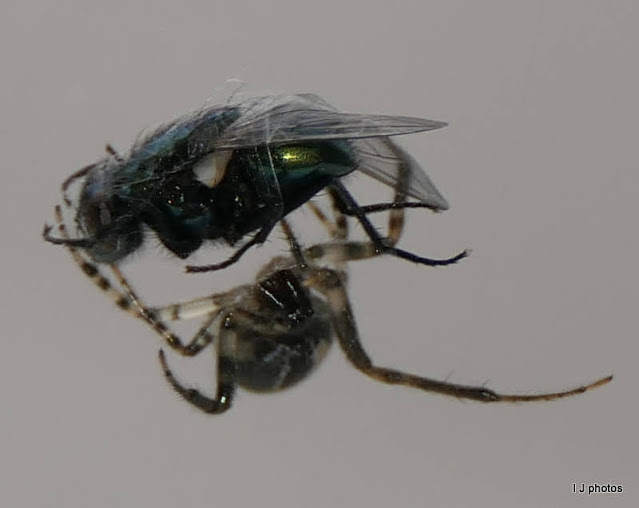 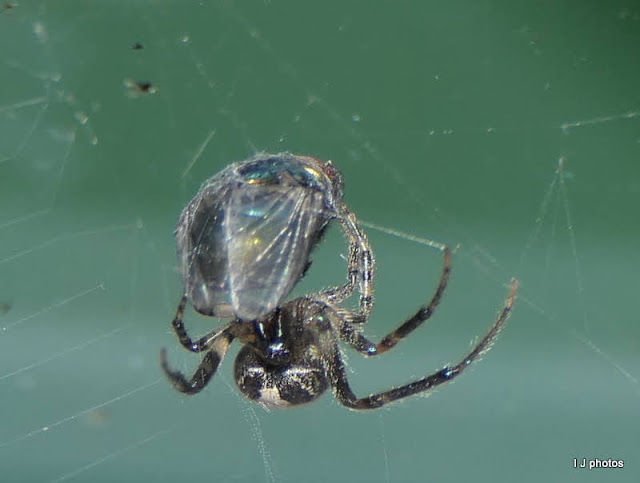 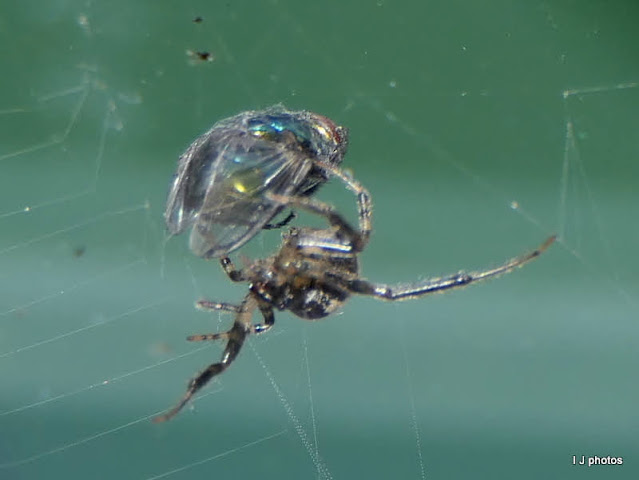 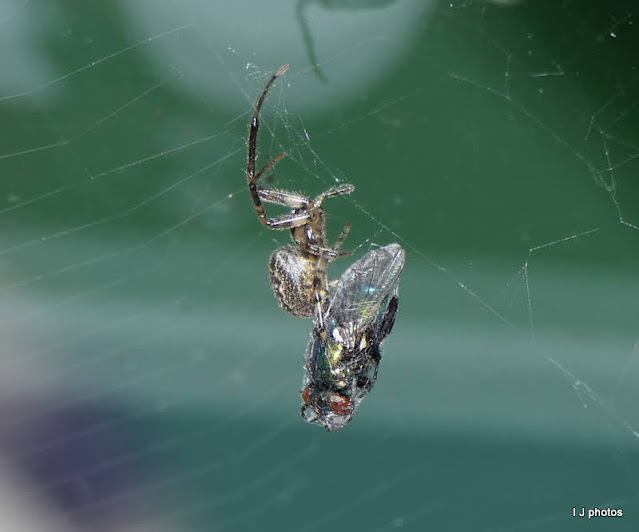 Posted by Ian and Irene Jameison at 7:01 pm

That is why I love my spiders, they eat what I don't want on board

Totally agree with you both. I hate flies!!!!