An unexpected and exciting sighting.

It felt strange last night, a huge car park and MB the only vehicle in it. It felt safe enough, though, because security guards patrolled on a regular basis and there was a locked gate at the entrance. We were told it opened by 7.30 am, not that we wanted to be away at that time. In fact it was more like 8.30 before we left and then to make our way toward Bempton cliffs, a RSPB reserve.

We had been there last September and that time all the nesting birds had come and gone, so we stood more chance of seeing chicks and more importantly, Puffins.

Our route took us over the Humber Bridge, a toll of £1.20 paid (we were classed as a car) and an hour later we had arrived. 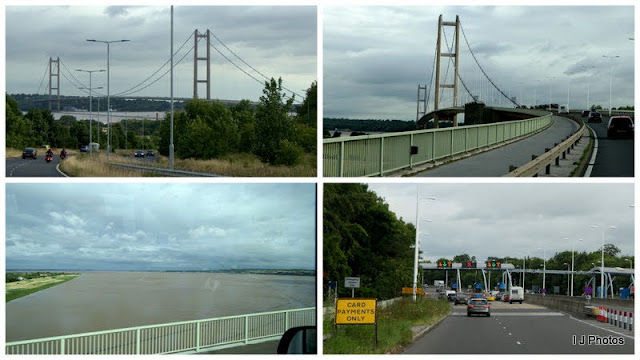 Gosh it was busy! In fact, the lane leading to the car park was full of parked cars and folk heading off over the fields armed with tripods and those huge lenses attached to cameras that stuck out a mile, hmm I'm sure if one must have to be a weight lifter to carry them!  Anyway, what was going on? I feared the car park would be full but as the first motorhome to arrive, 2 places had been allocated for the longer vehicle. Result! Anyway, on asking if a rare sighting had been seen, I was told that a Red-tailed Shrike was in the area, and of course hundreds of twitchers had made their way to where it was last seen. Not only that but a Black Brown Albatross had also returned for another year, having first been sighted 2020 and last year in September (same time as our visit but no sight of it then) This was another bird that shouldn't be here in the UK.

We set off in mizzle but that was soon replaced by fairer weather. The wind was a bit of an issue, so I didnt expect to see any butterflies on the nature walk taken later in the day. It took roughly 20 minutes to reach the first viewing point and gosh it appeared to be full up! Was this where the Shrike was? 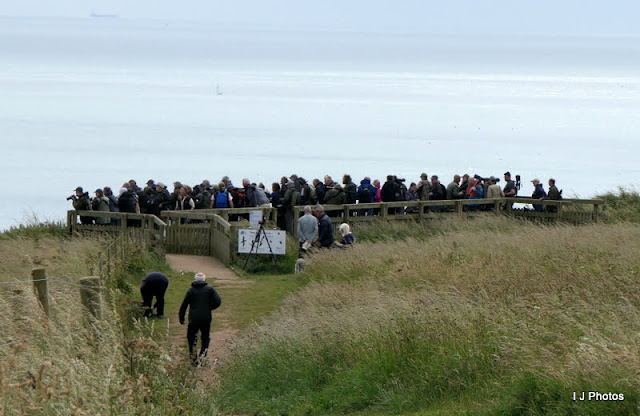 No, it was not!!! That Brown Black Albatross was glimpsed flying from behind the viewing platform and circling out into the North Sea.  Well, I had to get into the action and somehow muscled my way in between two burly camera buffs. And so very surprised when it appeared in front of me, snapping away with my small camera and getting these photos. Who needs those big lenses, I asked myself! Do have a look at the link above. It tells of when it was first sighted on our shores and why it is here. 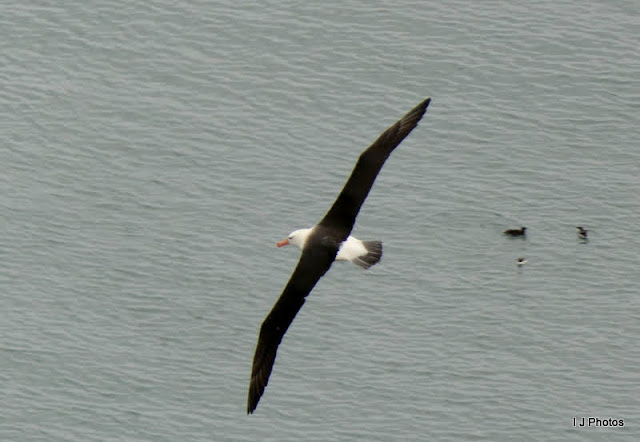 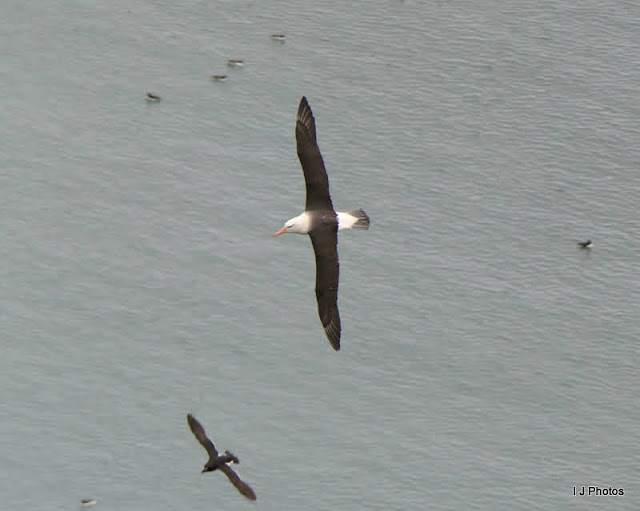 My main goal was to see Puffins, especially those with silver fish in their mouths, feeding their young. Okay, I did see Puffins, but not with beaks full of sandeel. I think I'm destined to fail on this task. There is one more opportunity when we go to Farne Island next week but there again, I may still be unlucky because the landing on the Island has been stopped due to Avian flu. The boat trip is still on, and they do get as near to the cliffs as possible, but of course Puffins make burrows in the sandy soil, and we had been told we could see them by the boardwalk, anyway, we will wait and see.

So now to the photos 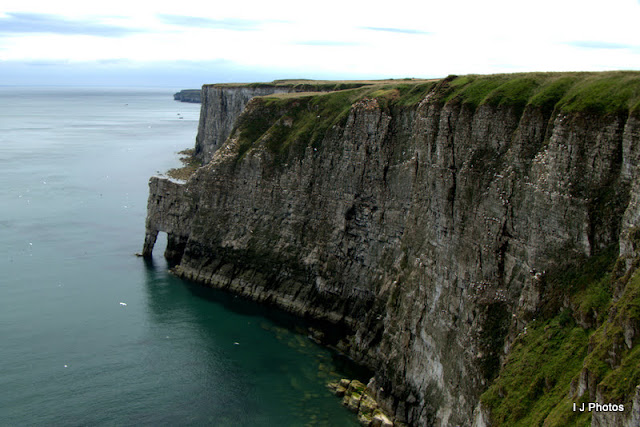 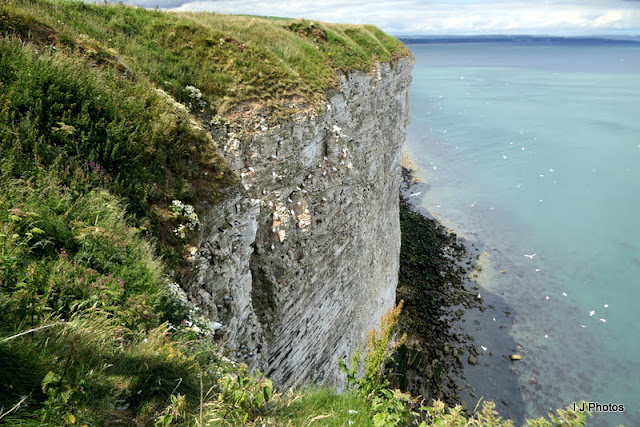 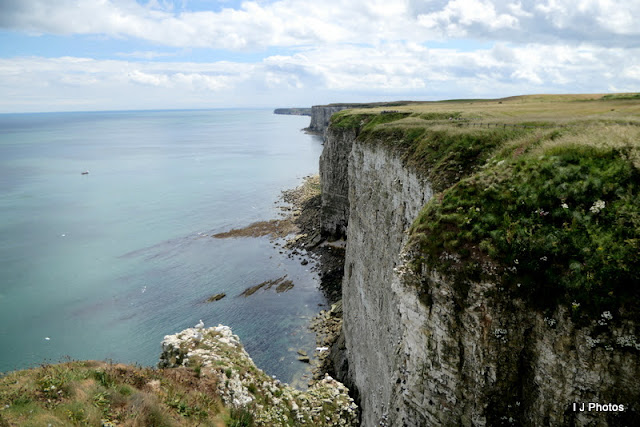 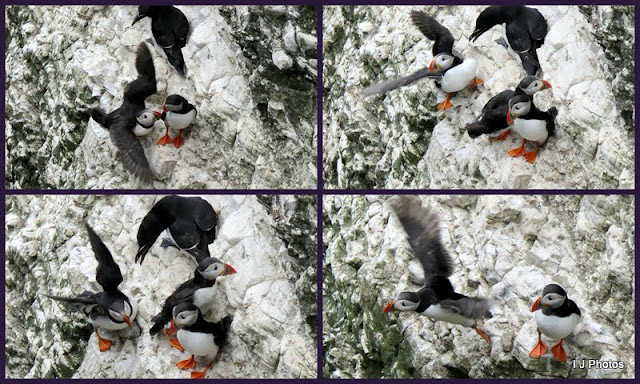 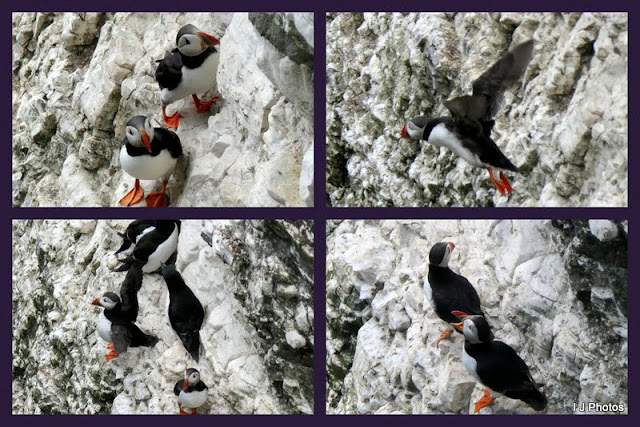 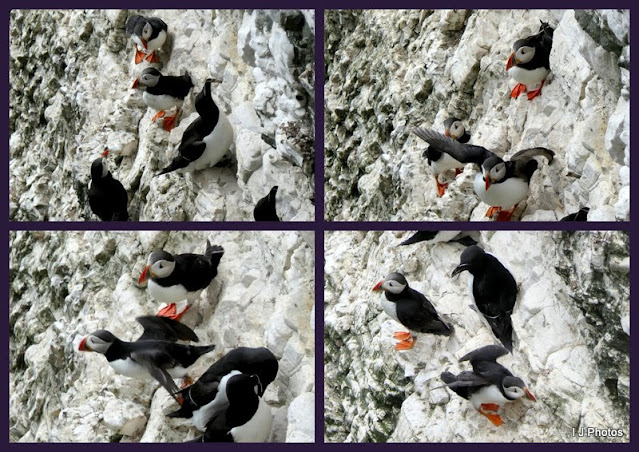 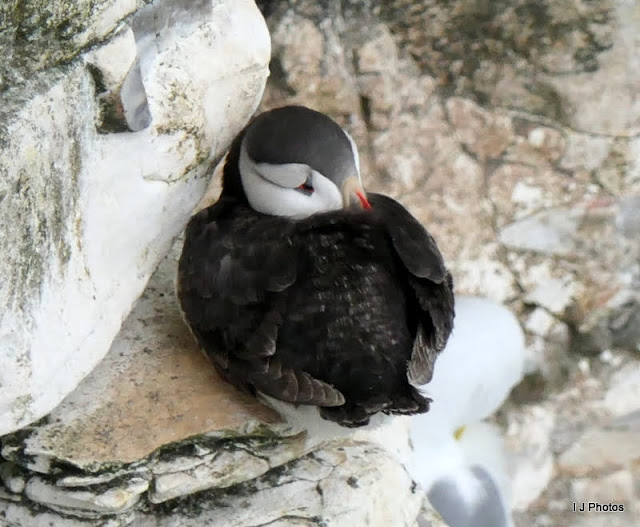 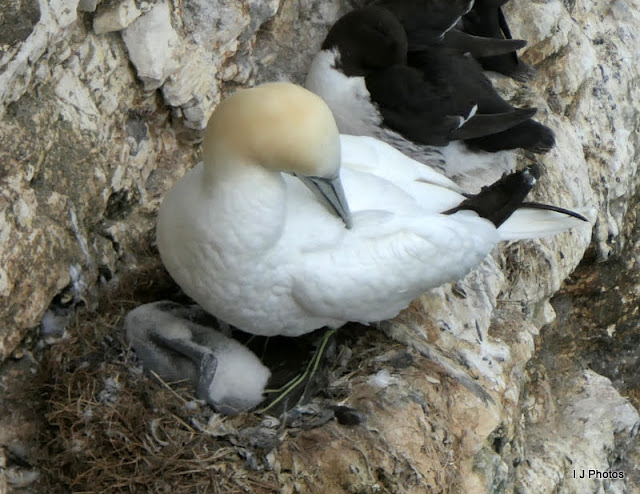 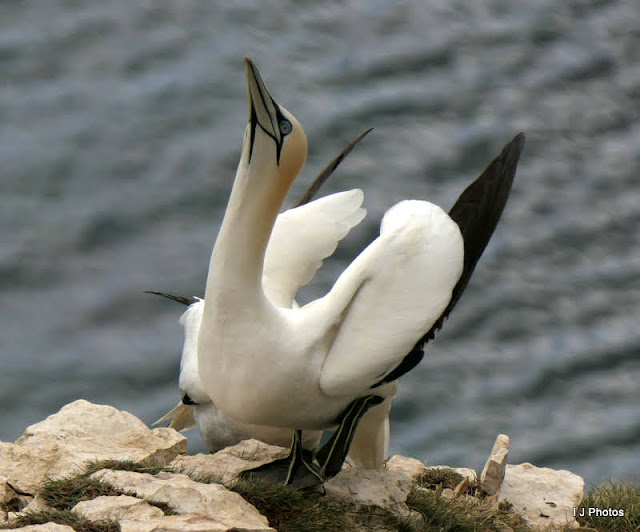 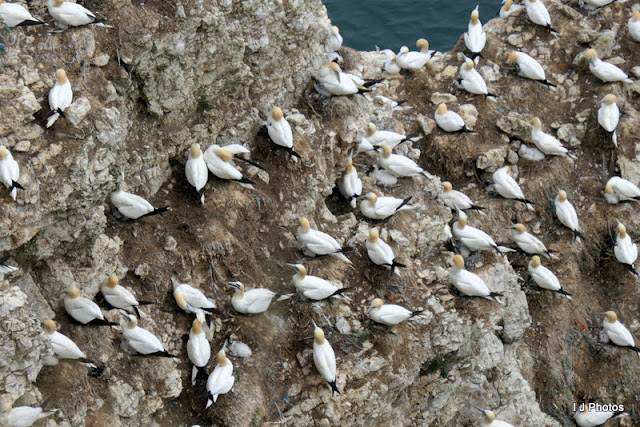 Sparrows, common as muck, although they were once on the endangered list. What is on this list is the Tree Sparrow. Its population had suffered a severe decline, estimated at 93 per cent between 1970 and 2008. However, recent data has suggested that numbers may have started to increase, and here at Bempton they seem to be doing okay. 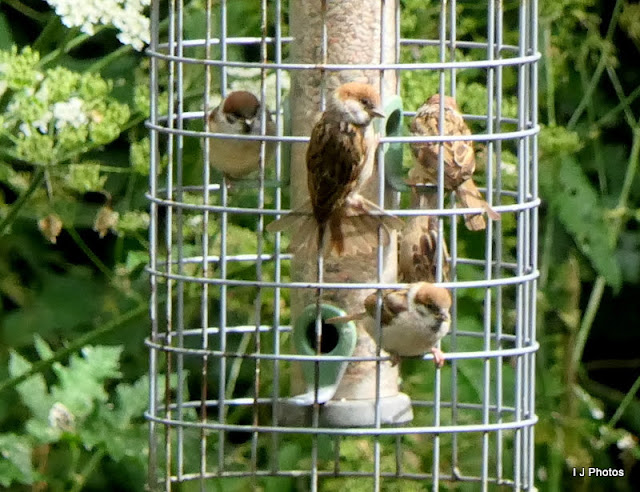 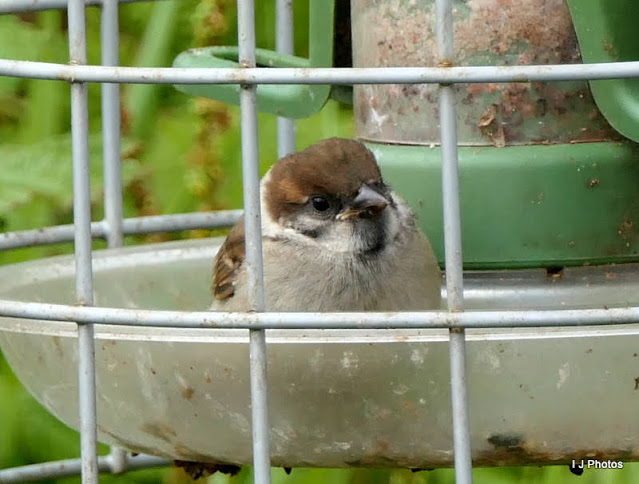 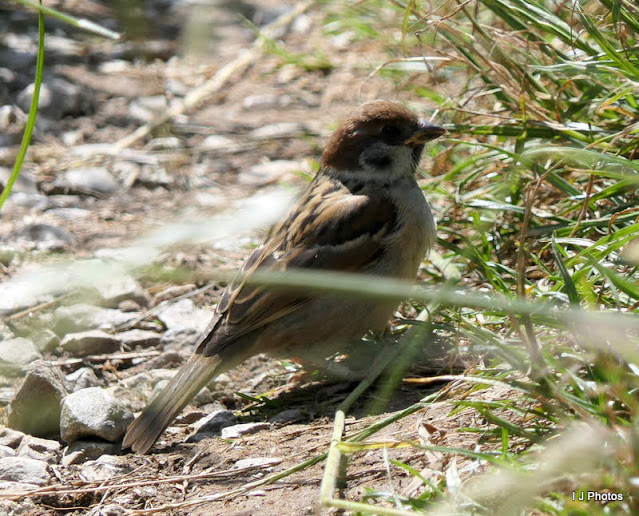 I have another mystery that someone maybe able to identify. (Jennie? Maybe your son?) This looks like a Daddy Long Legs but smaller and the body was yellow. Never have I seen anything like it, hopefully someone can help me out. 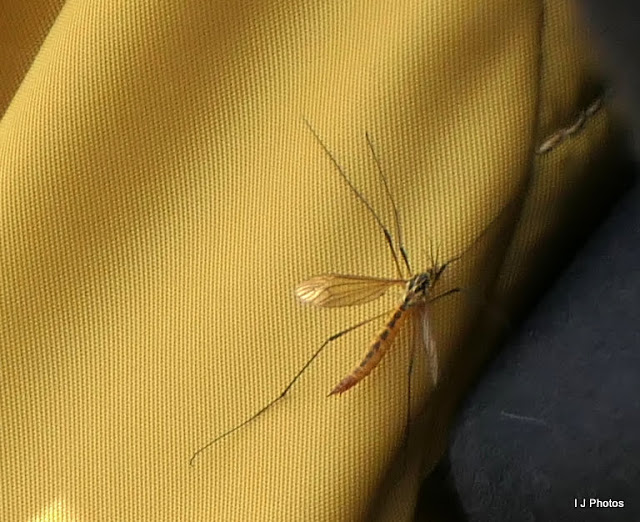 I have lots more photos to show, mainly insects. I did get a few butterflies so will put them on tomorrow's post.

So we left Bempton and headed toward Whitby. The plan tonight, a stop on the North York Moors. Found a really lovely spot overlooking Whitby, but that traffic noise! So after an hour we moved to a spot about a mile further along the A169, turning off onto the moors over a cattle grid. So much quieter and the views are equally nice. 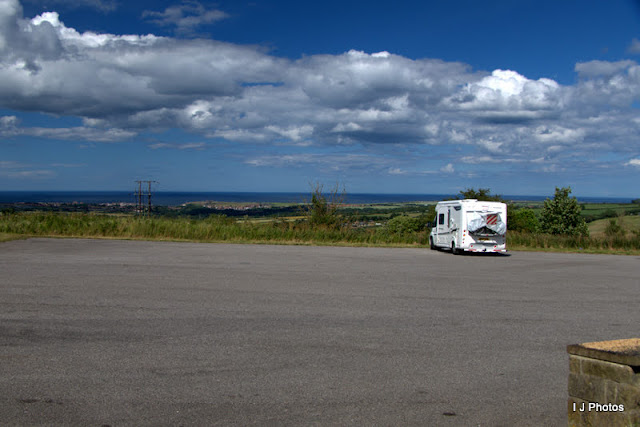 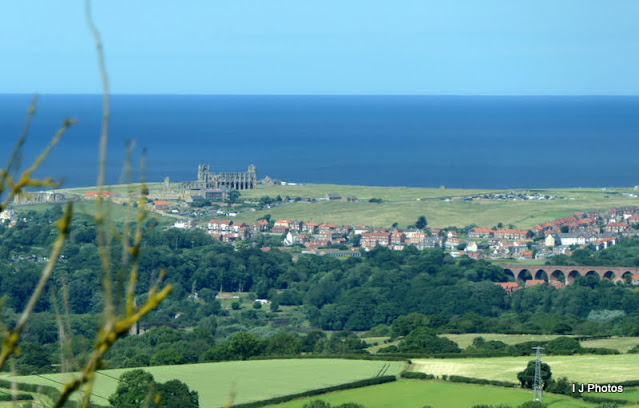 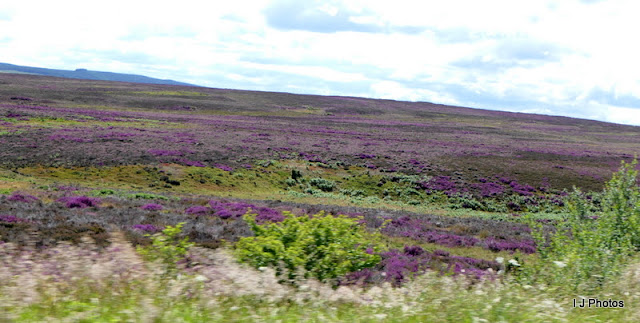 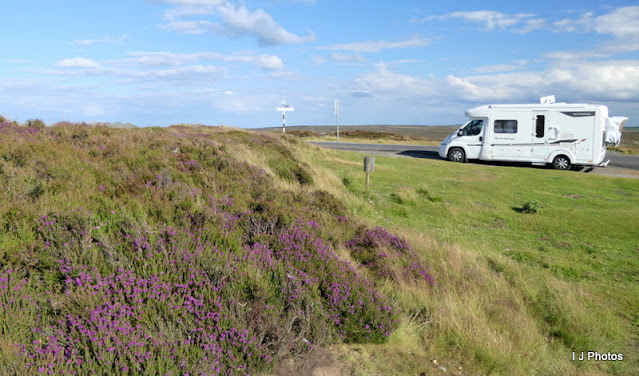 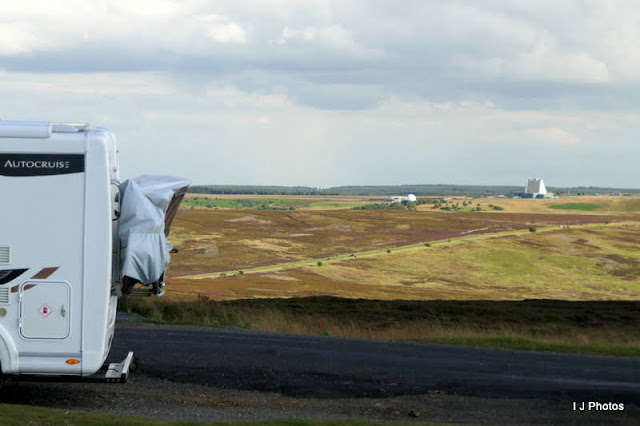 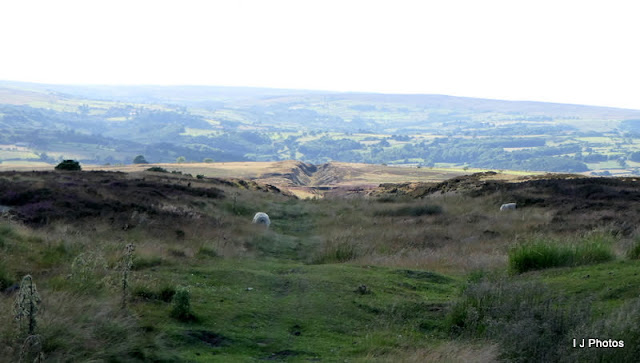 Thanks, Jo. You are quite right, and I was amazed to read they are common in Leicestershire. We lived in a small Leicester village for 14 years; this was the first I had ever seen.

Sorry to let you down, Irene - I have only just seen this post. I had my second cataract op recently and am somewhat behind with blog reading! I am glad someone else was able to help you out. Jennie x

Yes all very successful, Irene. I may need some reading specs for very small print, but I can do most things without specs wish is amazing. The difference in colours is totally unexpected. All in all well worth having it done and thankfully all thanks to the NHS. x

It seems I have a lot of reading to catch up on - most of July and then your August blogs.

Anyway, for the record, your Albatross isn't Black Brown, or even Brown Black, but Black-browed. As you say it's in the wrong place - in fact the wrong hemisphere! But a great sighting and photograph of it.