How does one retrieve a 21" prop from the bottom of a lock?

Wow, what a storm we had. One in the morning and all hell let lose! The lightening was continues and oh, if only our view hadn't been restricted by trees, what a sight to behold. 2" of rain fell in roughly 30 minutes. We know that because Heather left her bucket outside. Talking to a chap this morning waiting for a group of boys who had camped overnight in Devizes to walk past, (doing a sponsorship walk from Bath to Hungerford and then back to Bath) he mentioned the flooding on the way to Wooten. No rain fell in Bath apparently so he was quite surprised. Anyway I did feel sorry for the lads having had that storm to contend with. 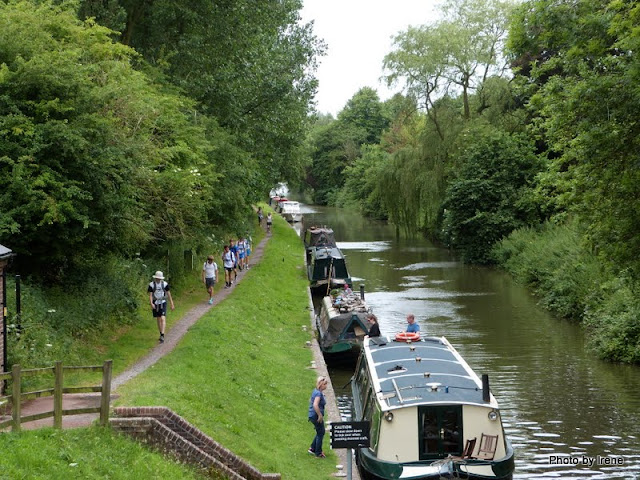 Then we heard the tale of the hotel boat. We had seen him arrive yesterday late afternoon and had stopped on the lock landing. We did our usual moaning about how they were a law unto themselves and seemed to think they could stop anywhere. We were a bit quick to judge though, as it turned out they had lost their prop in the lock. Heard it clang as it fell off! Apparently the taper must have come loose miles back unbeknown to the skipper and the prop and nut disappeared into the depths. So how did he retrieve it. The only way was to go in after it! He first located it with a pole then did no more then dive in. The depth of water was well over 6ft so feeling his way round the bottom was the only option. Then he found it was to heavy to pick up so with the help of some very burly men plus a few of the guests, a rope was tied around his waist and once he managed to grab hold of the prop the men heaved him and prop to the surface! Now all this was told to us this morning when the skipper came up to Dave and asked if he would be leaving soon. He wanted to get off the landing and, as a boat had left behind us this morning,  we pulled Vixen back towards us and then helped the hotel boat to take its place. A nut was needed as well as replacing the prop and luckily for him someone from the Devises came up with a nut and in he went again with prop and placed it on the shaft. The only photo I took was that of the prop on his roof. 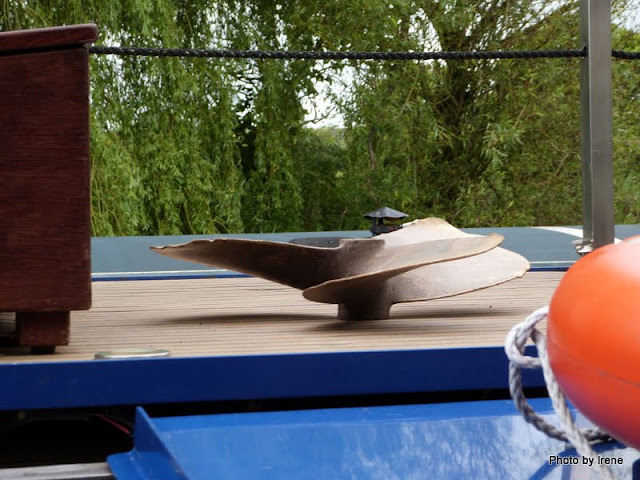 While all this was going on Tony and Helen pulled pins and left. We had a chance for a quick natter and farewell and am sure we will pass each other again at some point. One nearly always does even if its years later. 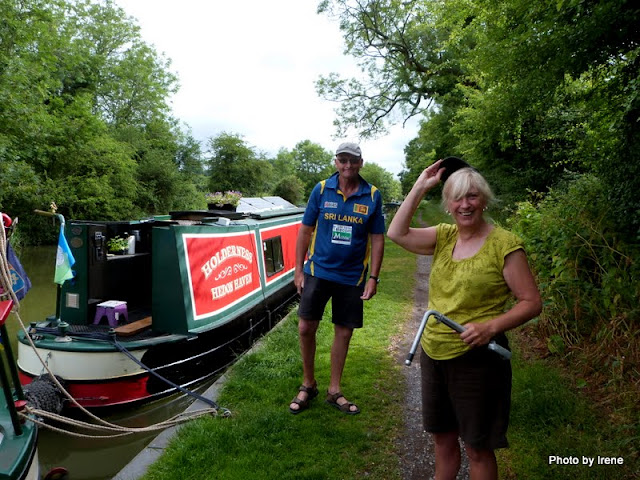 I was so excited about today. Meeting our other niece Jenny, who we hadn't seen since 2003, as well as Lizzie and Richard. I couldn't wait for them to arrive. I swept and polished FS to an inch of its life while Ian washed the cabin sides. With all that rain last night the roof was spick and span and only needed a wipe.  Then..... there she was. My how she had grown and into one beautiful young lady just like her sister Liz. 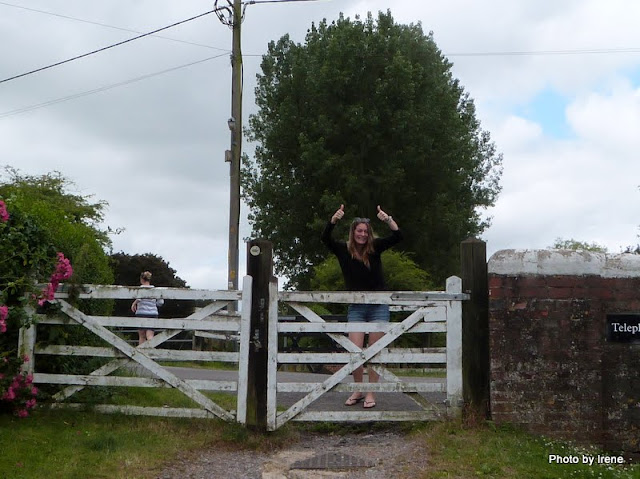 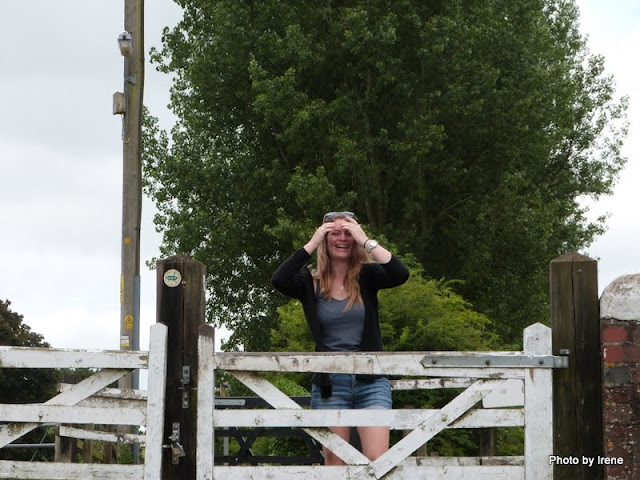 As luck would have it a wide beam was coming up the lock. Jenny being Australian had never seen anything like it, nor had Richard even though he was British born and bred, so both were fascinated by the whole locking procedure. Once their curiosity had been satisfied it was off to show them our home.  Suitably impressed (or were they just being polite!) after tea and banana cake we all departed for the Royal Oak and lunch.


Now the village of Wooten Rivers was amazing. Chocolate box setting with loads of thatched cottages. We were lucky enough to see a thatcher at work right by the pub and he came down to explain what he was doing. The whole roof will take him roughly two months to complete. 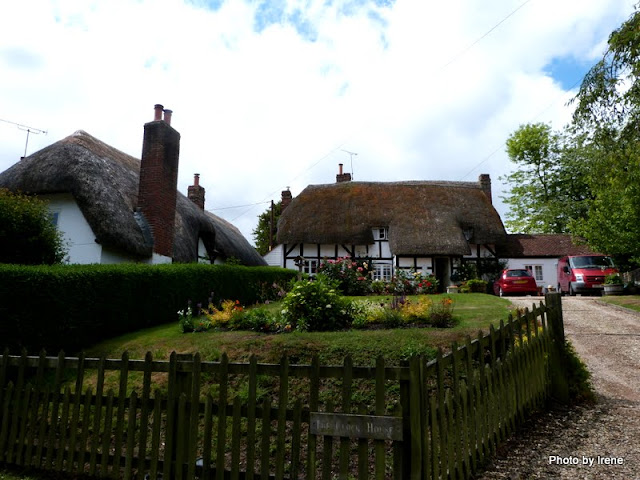 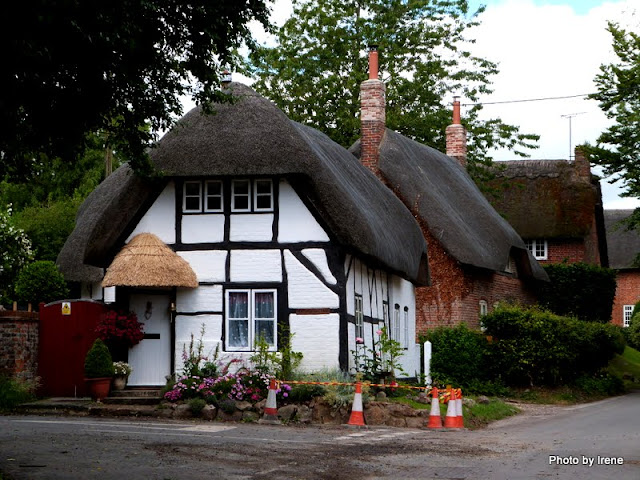 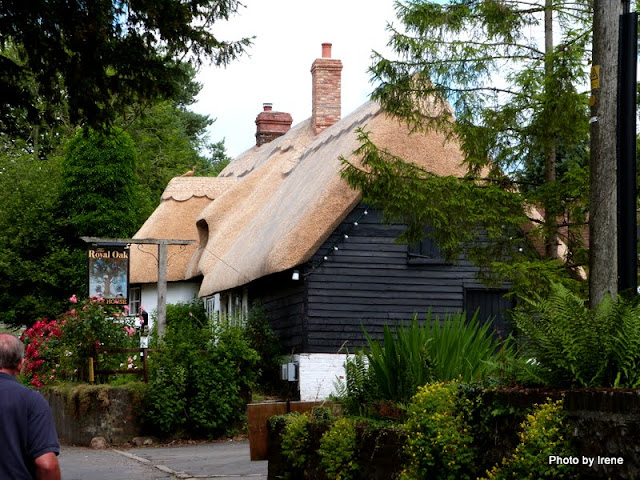 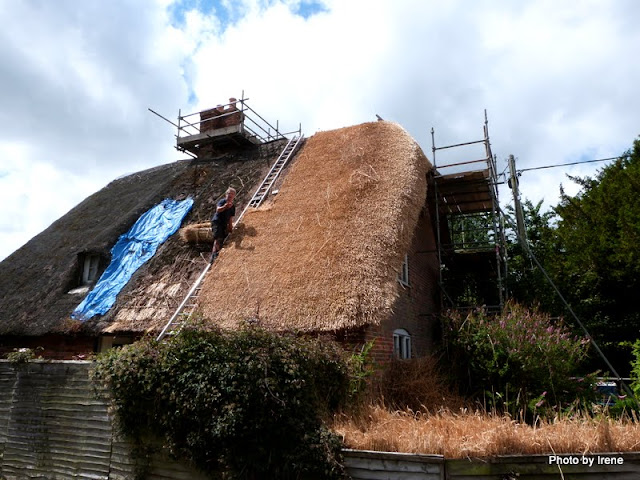 Then with free WiFi the girls wanted to Skype their dad. I haven't seen my brother since 2009 so it was lovely having a chat.with him face to face. We did apologise to the others in the pub for our noisy conversation but they all took it good naturedly.


Bit sad that they have gone but in about 16 months we fly over to Aus for Lizzie and Richards wedding. Got a bit of time to save for the airfare especially as I have made a new resolution. Those that know me will no how hard this is but I have given up buying bottles of red wine so the money saved can go into our spending fund. Thats not to say I have stopped drinking. If I'm offered a glass I wont be saying no!

Dave and Heather had left us earlier to find a mooring with a good prospect of getting a satellite picture. Andy Murray plays his third round match and they didn't want to miss it. After the family had left we pulled pins and found them moored in Pewsey. So the happy band of merry men are back together again. 13 miles of lock free cruising tomorrow before tackling the Caen Hill flight.

And seen on Dave's roof and by the mooring,


Posted by Ian and Irene Jameison at 6:27 pm