It's been a day of meeting fellow bloggers. Chris and Jennie on Tentatrice, Ken and Sue on Cleddau. and Jan and Tom Waiouru all moored in Newbury. In fact, we pulled in behind Waiouru but apart from a very brief hello we never got to meet them properly. Having shopped till we dropped at Lidl,  waved to Ken, Sue, Jennie and Chris as they glided past on our return from shopping, had lunch, set off around 1ish and then were very surprised to see them again not 100yds further! A wide beam Wessex Rose (the one that lost its prop in the lock) was causing mayhem by wanting to stop for diesel. Dave had to reverse to allow the wide beam to manoeuvre and as soon as he saw a gap, went through closely followed by us. And there was Tentatrice and Cleddau, one on the water point and the other opposite. We waved again as we went past only to discover on reaching the lock, Sue and Jennie with gates open waiting for their boats. Oops!! Had we pushed in? Heather had a word with Sue and explained what had happened. Sorry guys for queue jumping and thanks for your help. 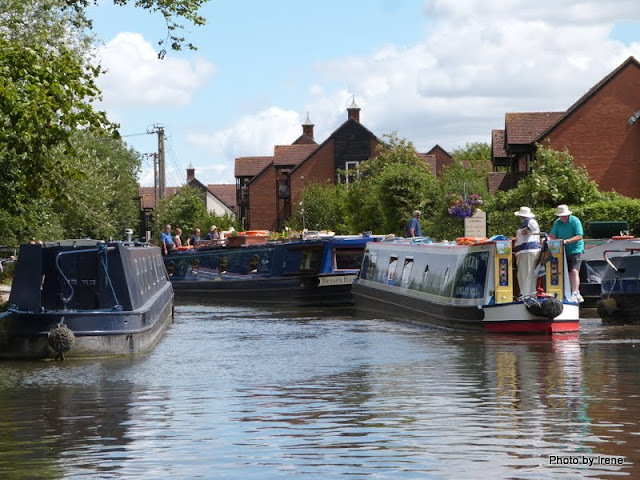 So having left them behind Ian was suddenly hailed by a walker informing us of a loose boat across the canal. It looked to be at a peculiar angle as we approached and sure enough, it was listing quite badly. Plan of action was to tie a rope on the stern dolly and then reverse, thus pulling the boat back toward the bank. That was the theory anyway, but before we even got close it started moving. Two C&RT bods had a rope around the bow but the stern was too far out to reach. Out came the pole and I pushed the stern toward the bank. C&RT did the rest by lassoing the dolly (a most impressive bit of rope throwing) and the rest was history as we sailed on our way. 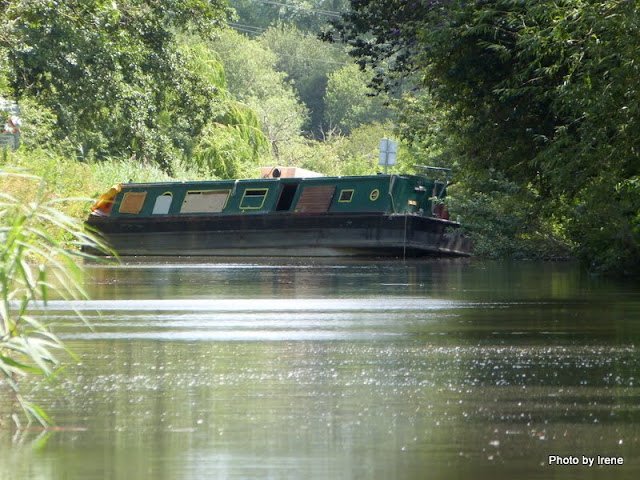 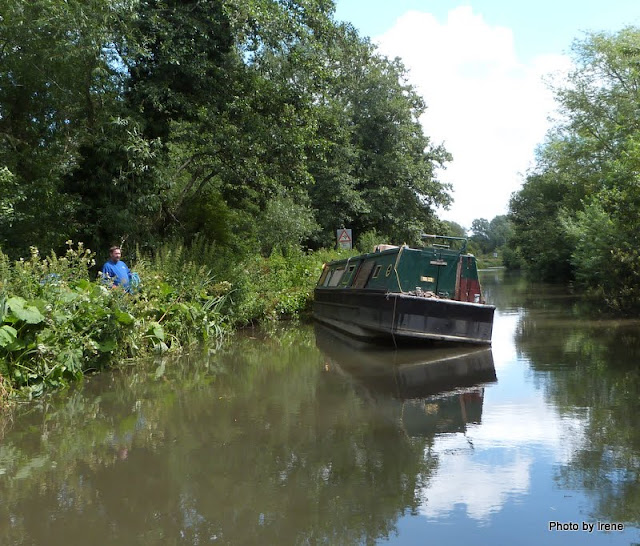 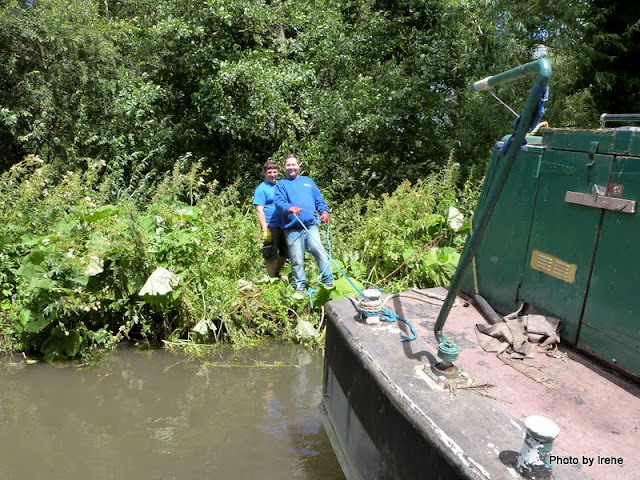 Another holdup but this time at the lock. Below were two boats, a hirer and a lone boater. The lock had been in our favour but either they didn't look to see if any boats were coming, or just couldn't be bothered to wait. Anyway, they fiffed and faffed around, first trying to get off the lock side without much luck (wind and bywash didn't help matters) then when they did get off the hirers came in really really slow with a person on the bow indicating how far they could go before hitting the gate. They then tied stern and bow to the bollards. In the meantime, the private boater sat there and looked on! You may have guessed it, Ian was doing all the work even pointing out to the hirer the dangers of trying to lock side bollards without keeping an eye on the ropes. 25 minutes we sat waiting for them to finally exit the lock and then, to rub salt into the wound, as we approached Thatcham an oncoming boat took the last available space!! So on we went testing out one mooring after another all to no avail. Then another lock 91 and this one is painted by volunteers. They filled the lock and opened the gates but forgot to drop the top paddle. Dave started to lift the bottom gate paddle and thankfully Heather noticed. Shouting for Dave to stop I leapt off the boat, dropped the paddle post-haste much to the bemusement of the volunteers. Thankfully neither Ian or Dave came back with white paint over them 'cause I would not have been best pleased! 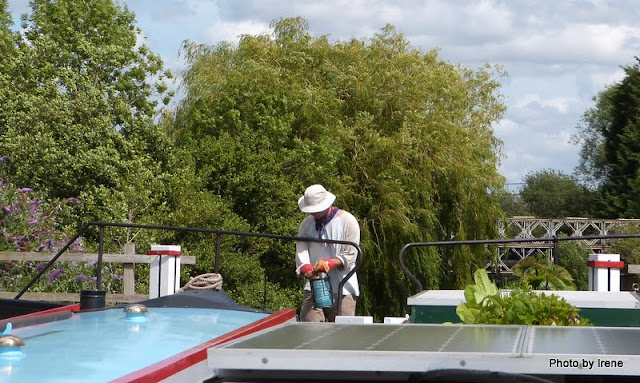 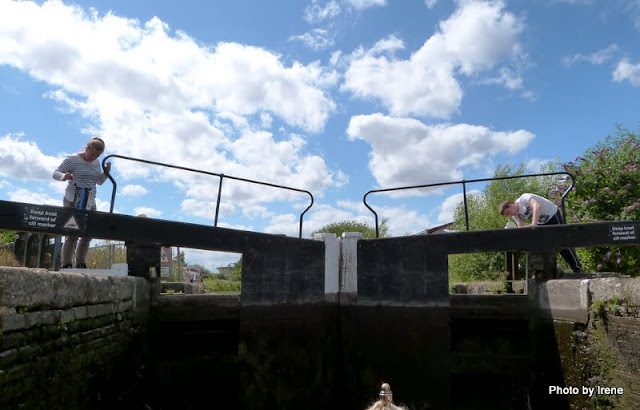 On we went trying more possible spots to stop until eventually, we managed to moor by lock 92.  Vixen found a great spot opposite on a good piled edge. By now we had been on the go for 9 hours! Then just as Heather put the kettle on, Cleddau. and Tentatrice arrived. After some trial and error, they too managed to get moored. So, all in all, it's been a longish day and as usual, the dramas that seem to follow us around. Only one more day on the K&A before once more entering Thames, so looking forward to that. 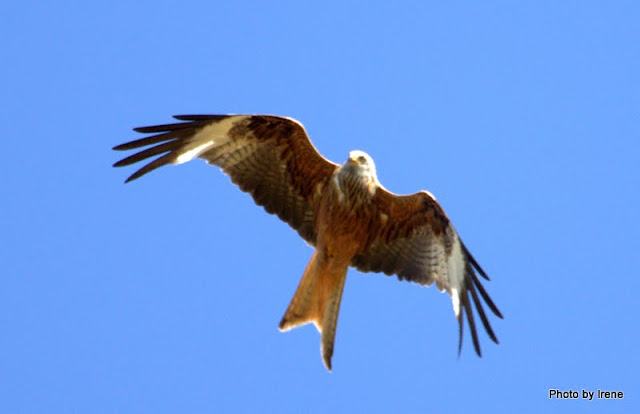 Posted by Ian and Irene Jameison at 6:01 pm

You missed another blogger! You moored up in front of Mum & Dad's boat, Sola Gratia, when you were in Newbury.

Oh blast. Hadn't realised they blogged. Sorry about that. Tried to add them to my bloggers list but somehow the URL comes back as unknown. If you have a URL that I can use please leave me another comment. Thanks.


See you photoed Mum and Dad's boat behind those hissing featherballs! Dad says my Blogspot is http://guidedogoakley.blogspot.co.uk. Say hello to Monty for me if you see him again.