Best laid plans went completely awry! Woke to -3 temperatures, opened the curtain to see ice on the canal. Oh well, can't be much we thought. After all this was only the second real cold spell of autumn. 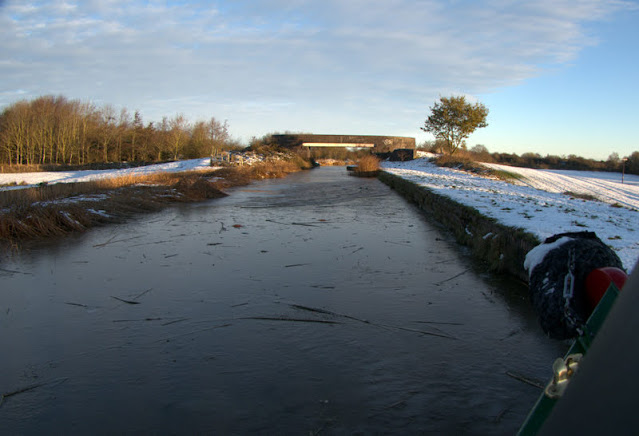 The Houdini was frozen, without that cover it was bound to happen. Once that frame warms up God help anyone standing under it. Cold water dripping down one's neck is extremely unpleasant. 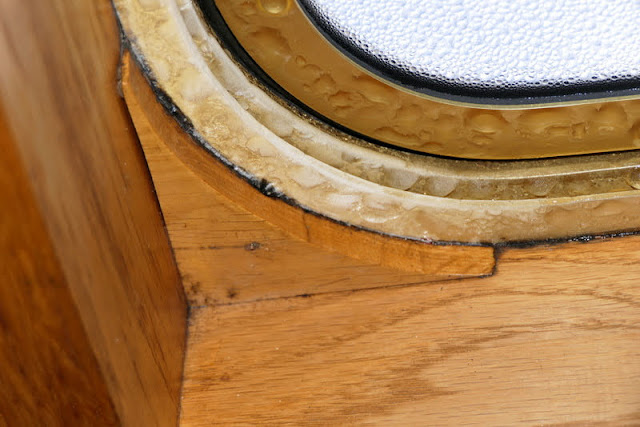 So after a substantial bowl of porridge to keep us warm, the tiller was attached to the swan neck, warm outer wear put on and engine started. First thing Ian did was replace the Houdini cover. 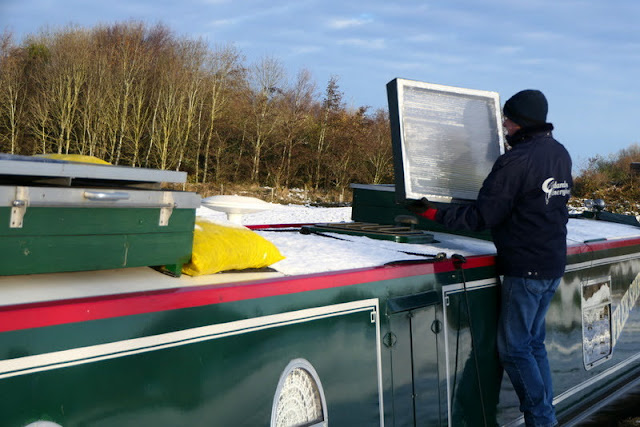 Then we tried to undo ropes! Frozen solid they were.  Anyway that was achieved with a bit of jiggling and tugging but trying to get the pins out...well that was another matter. Feeble me had no hope, it took my burly 'man that can' to prise them out of the ground. Ian pushed the bow out, got on to the back deck and I tried to drive us forward. Hmm, that ice was slightly thicker than we had anticipated! 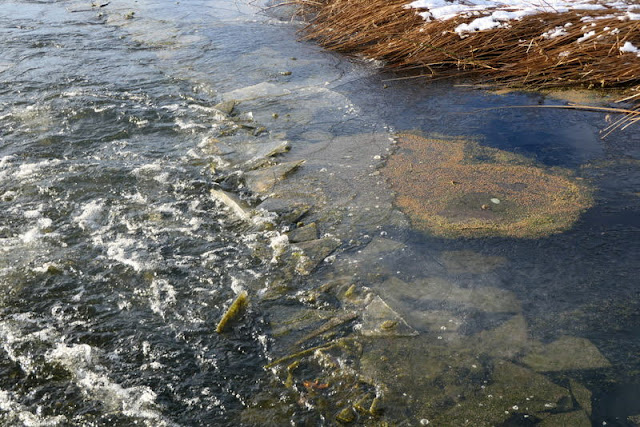 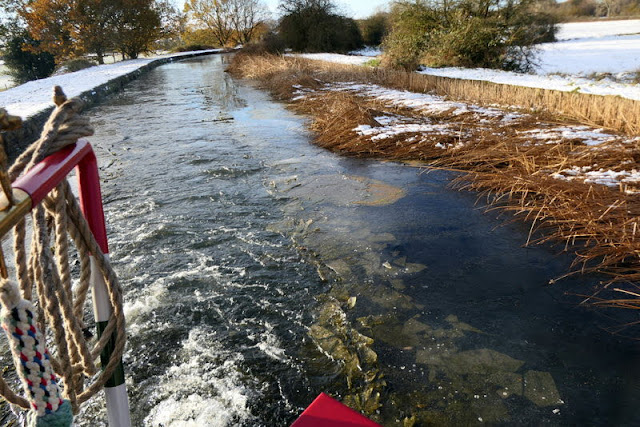 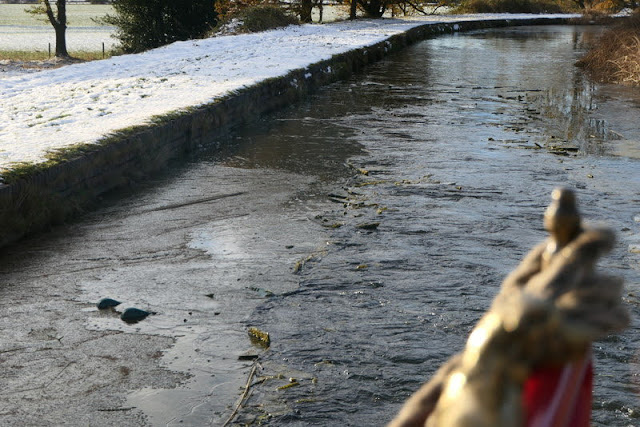 Power on and away we went, through the bridge ole, past the point where the Litchfield and Hatherton hope to restore the canal (CLICK HERE)  and breaking ice as we went. 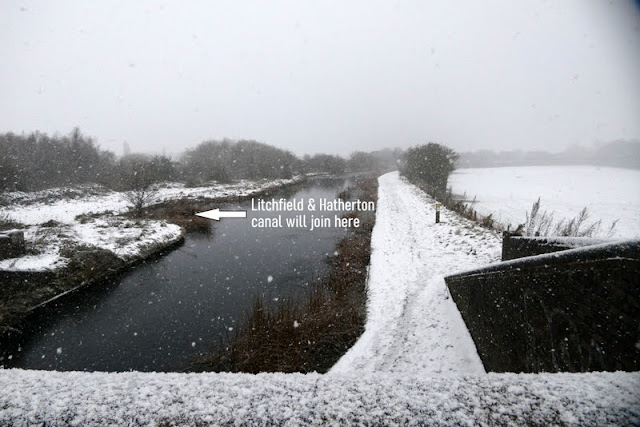 And then...that blooming Azolla weed, well it was like trying to steer through a carpet! That weed had formed a very thick ice layer and FS was being pushed one way and then another,  I came to a dead stop, ah....not good! All we could do was reverse, back through the bridge 'ole, and back to our mooring. But we are now in a bit of a pickle! Both loo cassettes are full and the third (thankfully we took the spare out of the motorhome) had just been replaced. Two days we reckon if we don't drink too much. Anyway we stopped by the bridge, it's in the sun, so solar panels should help boost the batteries.

I went off to see how far that Azolla weed stretched. Quite a way, although it did improve before the next bridge came into view. But of course, there may be even more further along. Nop best stay here then. We really hope the weather will improve and melt that ice. If not, with the situation getting desperate, we may well have to try and break through anyway. 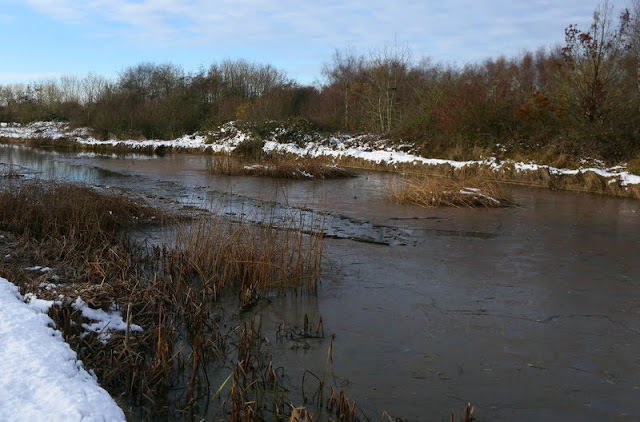 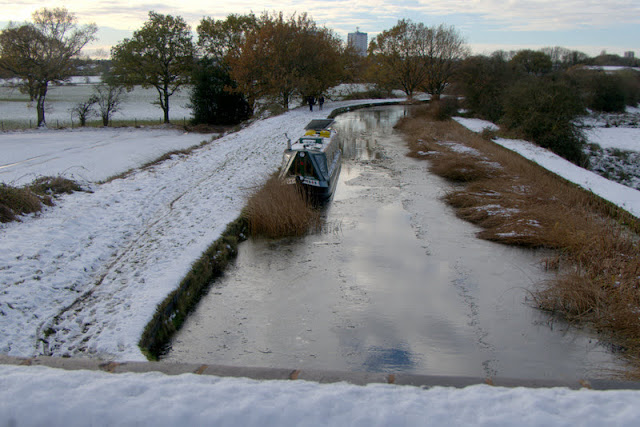 Oh and its snowing again! 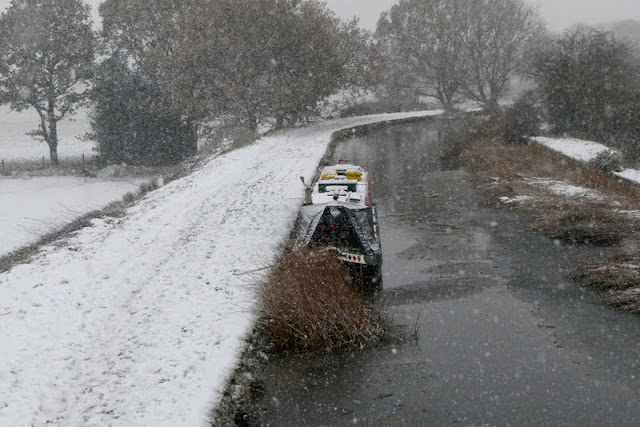 Posted by Ian and Irene Jameison at 4:26 pm

Brings back bad memories of trying to get Percy back to Fradley. Our savior was Calisto who we followed after he broke the ice.... I've ordered some warmer weather for us !

Thanks, Nev, hope your order comes quickly. We could certainly do with it.

Looks like you may have to dig a hole in the frozen hedgerow :-)

How far to tow the cassettes for emptying purposes? I am using you either have a trolley or the man that can will rig up a sled ...
Mxxoo

Really hope we don't have to Tom, not something we ever wanted to do. The weather looks better tomorrow so fingers crossed we get away.

Oh the joys of winter cruising! We had an experience many years ago during an Easter hire when we were hit by a cold snap and the canal froze to a depth of the best part of an inch. We sat it out for a day, but a phone call to the hirers made it quite clear they wanted the boat back on time whatever so we had no choice but to move. We didn't have weed to contend with, but steering was difficult and the noise incredible. We attracted quite a few comments - some actually verging on abuse - from moored boaters we passed (as carefully as possible) - but what choice did we have? Even apart from the cold it was altogether a rather unpleasant experience, and one I'm pleased never to have repeated.

Hope the thaw has come in time for you.

Hi Paul. It's not so much the steel boats that one needs to worry about, but the plastics, a sharp shard of ice could go right through the hull. We hate trying to break through, takes all the blacking off for a start and you're right, the noise is horrendous.

Hi Irene,
You do seem to be between a rock and a hard place! A few years ago we did fill with water at Brownhills but I don't recall if there were other facilities. As you approach the water was on the left just as you come into Brownhills in a modern building. If you are desperate, do you know anyone in the Lichfield and Hatherton Trust? They have lots of resourceful people who i'm sure could sort something out for you, and they are always grateful for a small donation!! At least you will have plenty of shops if you get that far.