Not the chimney again!

Had meant to be away early, but something happened last night to make me sit bolt upright in bed. 3 am and it sounded like a stone hitting a glass window or, as I described to Ian, like an old-fashioned light bulb going pop. Of course my sitting up disturbed Ian and it took us both an age to get back to sleep. Then what sounded like bins being dragged and emptied disturbed us again around 5 am so it didn't surprise us in the least that we overslept, not getting up until well after 8.40. And as to that sound, nothing was seen on FS and we scrutinised every inch of her. Ian is now convinced I must have had a dream.

Setting of we aimed for the facilities by Farmer's bridge lock. Our water gauge has packed in, and no telling how much is left in the tank without giving it a dip. Best to keep it topped up especially as another ice episode could happen at any time. 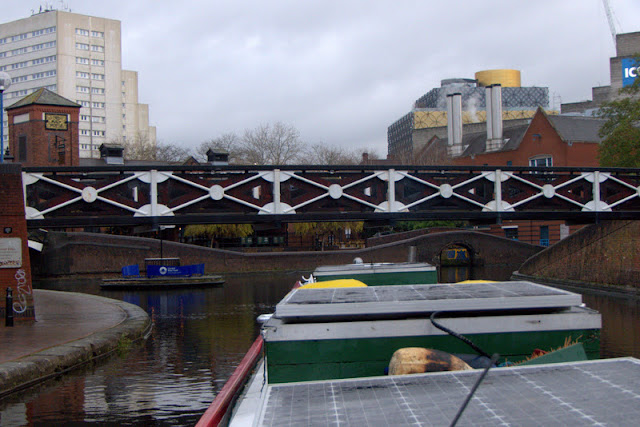 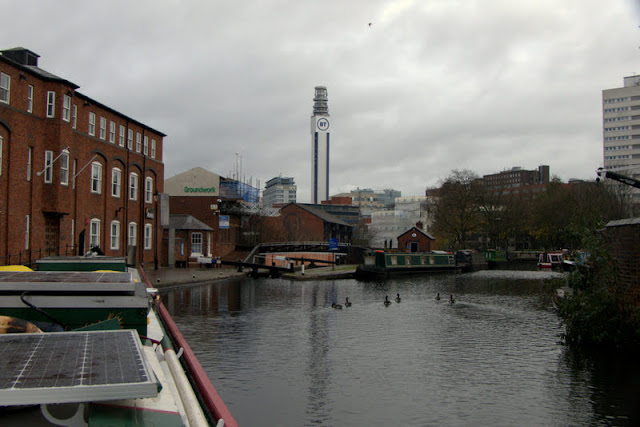 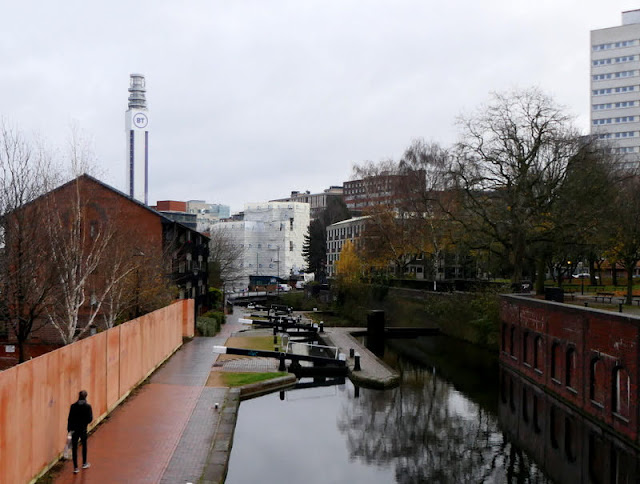 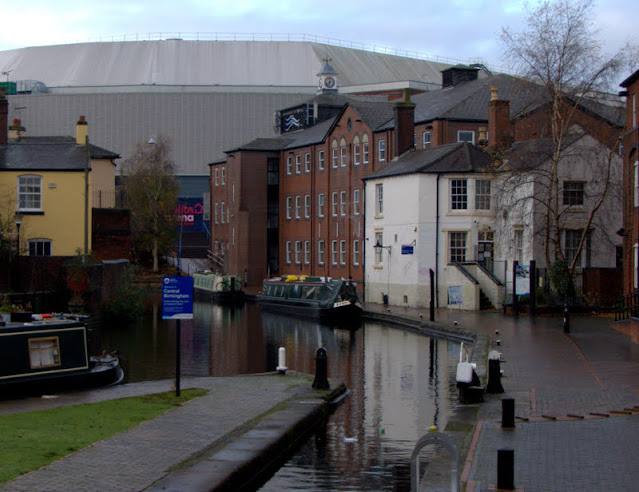 Now on the Birmingham and Fazeley canal, the start of the flight was just beyond the facilities and great news, the locks were all full. We did kinda hope they would be because last night, on our return from town, a boat had moored behind us facing the other way. This meant it could be a very easy passage down the flight, fingers crossed anyway.  So once the the water tank was full, we started the descent. Time was 9.50am

Farmers Bridge flight is nothing like any locks on the system. One descends into the gloom with high rise buildings on either side, quite claustrophobic especially as all the right side buildings were covered in scaffolding and sheeting. We thought this strange until Ian happened to chat to a local who told us all the cladding was being removed by the council. It was all because of what happened at the Grenfell Towers in 2017 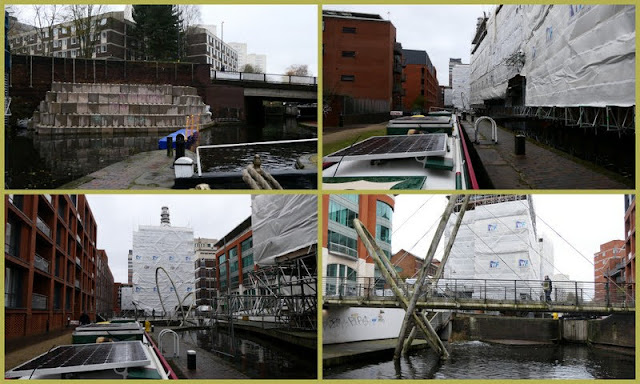 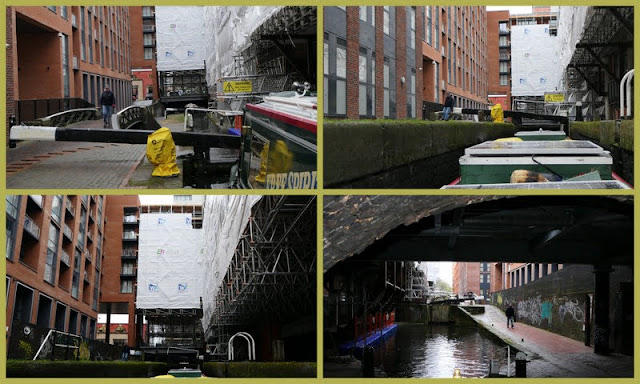 Waiting in lock 8 and before I descended, all I could see in front of me was a black hole. 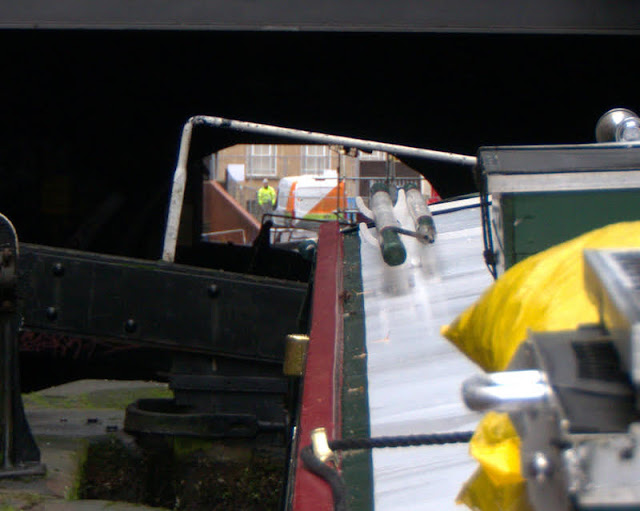 The shape of the lock could be seen but heading toward lock 9, well it was like I was entering a tunnel without a headlight! No way could I see the lock wall and to make matters worse, going under that building suddenly I was confronted with a curved bridge wall. The lock was under the bridge and driving almost blind, a horrible screeching and scrapping could be heard. What on earth was that. thought I?  It was on looking straight ahead that I spied the chimney at the wrong angle! 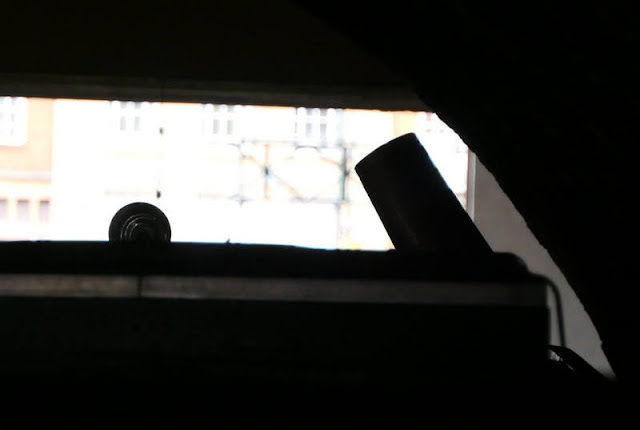 I can't believe this has happened to me again because the same thing happened in the Ashted tunnel when in Birmingham 2012. That was worse though because I got well and truly wedged.

This photo from 2012 shows the building ceiling structure and then the bridge arch. I have made it lighter to give you some idea. 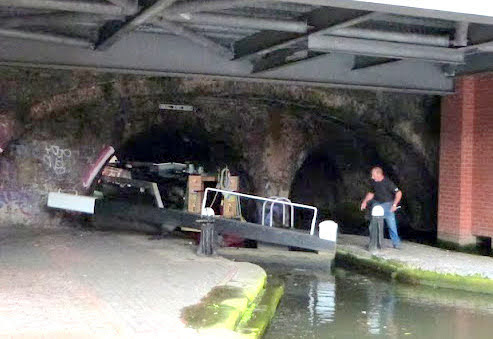 Ian couldn't believe I had done this again either, and pooh pooed my excuse of not being able to see! The good news was I hadn't damaged the chimney too much. Ian managed to knock out the dent, so the cowl could fit again. The bad news was, on reaching our mooring later in the day, he noticed I had also damaged the handrail! 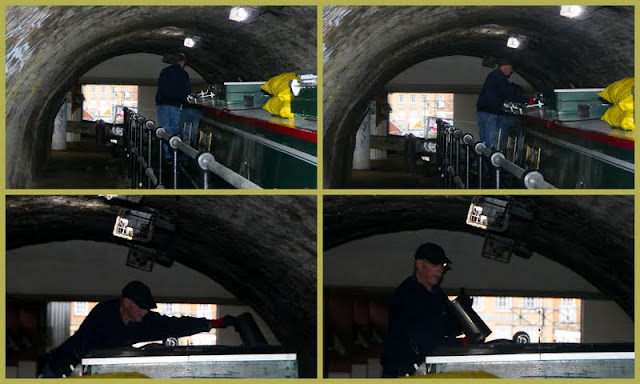 This set of 4 photos shows the workman gathering polystyrene from the path. It had been used to clad all the buildings. No wonder the Grenfell Towers went up like an inferno. 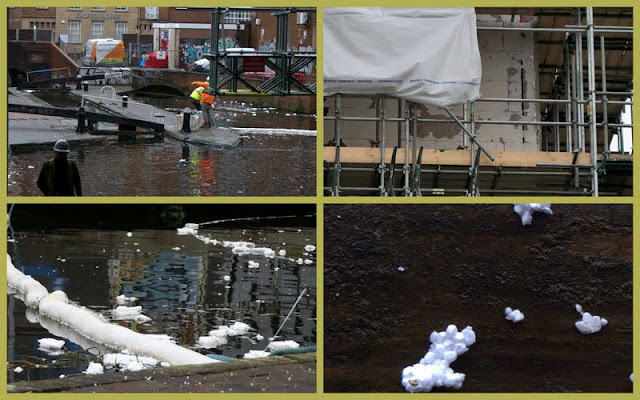 We completed the flight in 1 hour twenty minutes, not bad going but of course we had the added bonus of having every one in our favour. A short cruise further and Aston Junction came into view. Turn left, and Aston flight was directly by the junction. 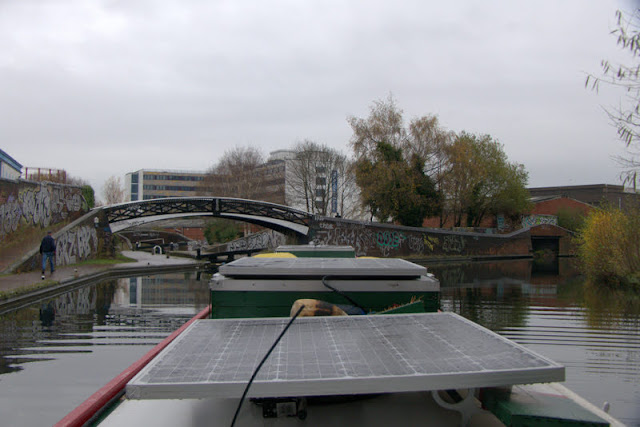 Before Ian headed off with the windlass he told me to hold fire and bimble. What, what, what??? I asked him. "You know, just hang around until I give you the nod" he replied. So this is to become our new word then. To bimble instead of hover mid-channel! 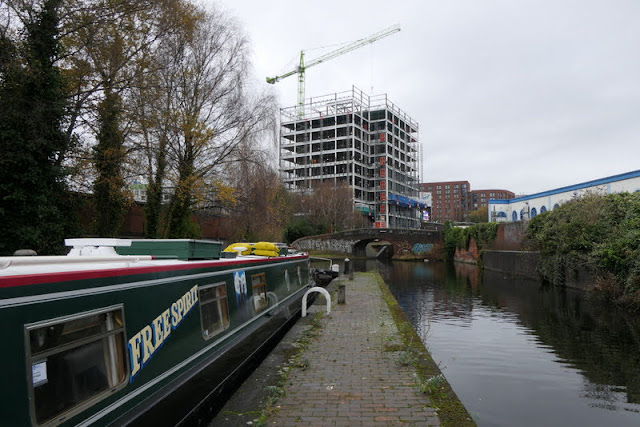 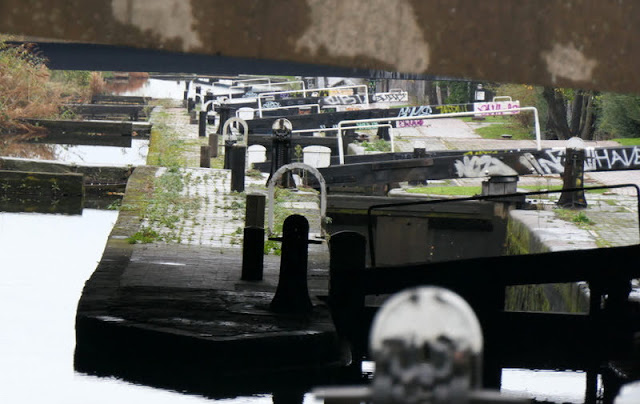 Only six of the 8 locks completed because a mooring on the offside seemed a good place to stop. Offices all around we didn't expect to be disturbed and the bonus of a small café serving hot meals as well as sandwiches appealed for our lunch, and also serves breakfast all day. Next door to that was a small general store, ideal to buy a loaf of bread. You see, Ian had a major brain block when making the bread today. He forgot to put in the yeast. This was the result. 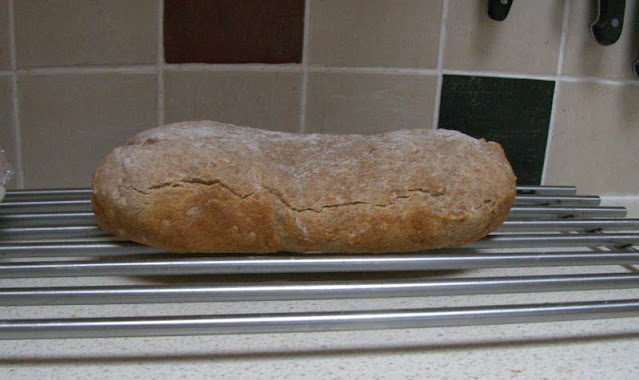 So in the end we did 21 locks in 2.7 miles, taking us 3 hours 20 minutes. If I deduct 10 minutes for the stop to sort the chimney and for Ian to take the paddles out of the bread, (he hadn't realised he had forgotten the yeast by then) oh, and the short stop to make a coffee, it took a total of 3 hours 10 minutes. We didn't think that too bad. 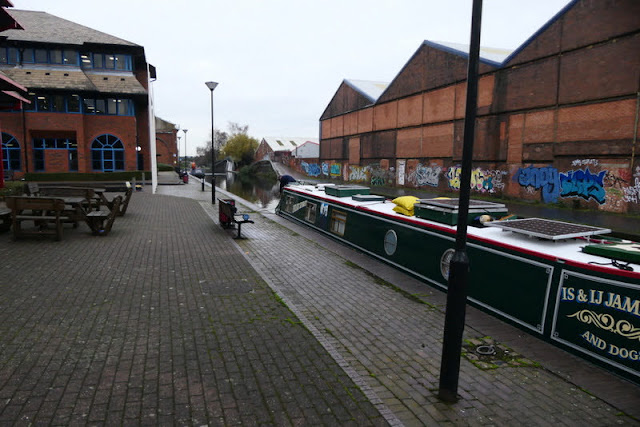 And for Ian a treasure collection, all found by the Farmers bridge locks, 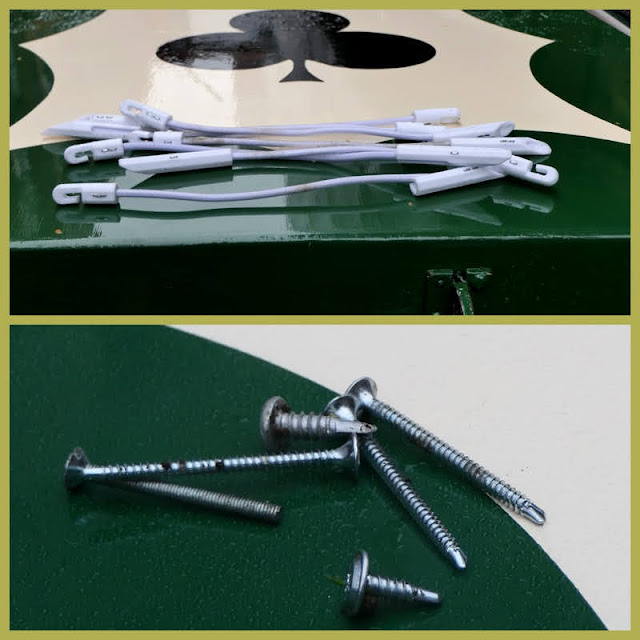 What a lovely way to remember the boat people during the war, 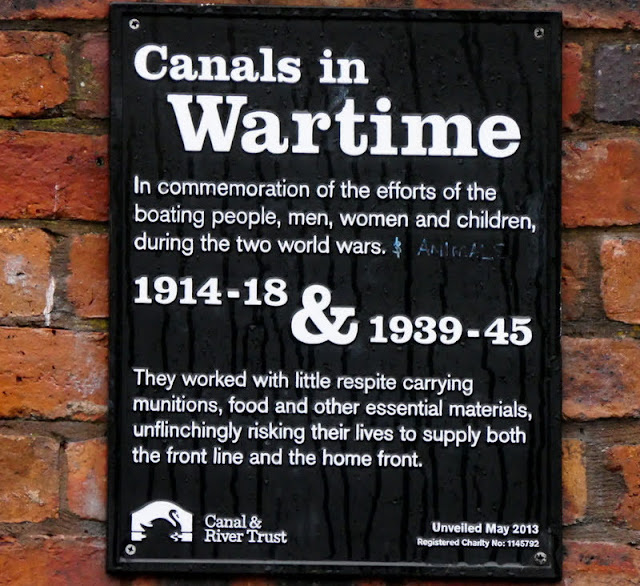 Posted by Ian and Irene Jameison at 5:04 pm

Irene it's obvious! Ian is hoping that if you bimble instead of hover the chimney won't get damaged :-)

That made me laugh Tom. Thanks for brightening up my day. xx

I also like the word coddiewomple. It is not to hover but going somewhere but you don't know where. My 5 year grandson keeps asking me when are we going on our next coddiewomple

Love it, Richard. Children do make up the most marvellous words.