Ocker Hill Junction was reached before midday and it was a left turn to Birmingham on the Walsall canal and toward the next obstacles, Ryders Green Locks. 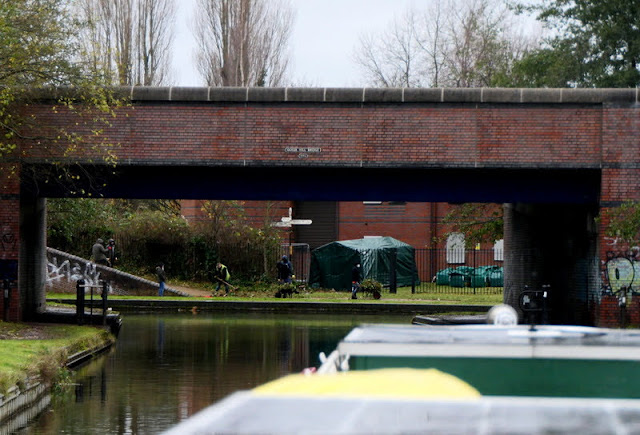 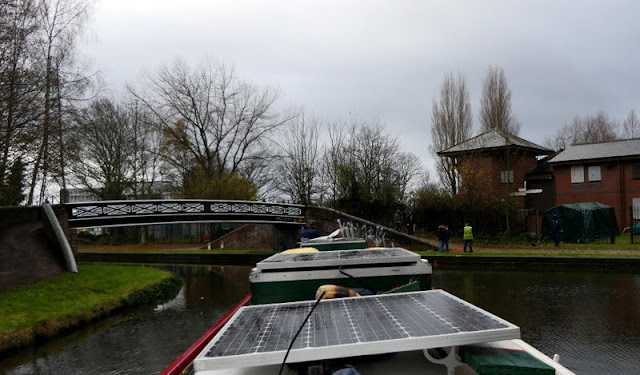 We decided to do the unthinkable and sit on the lock landing for lunch. The chances of another boat appearing was zero judging by the lack of boat traffic at present. We couldn't get FS's bow to the side, which in itself was unusual because the stern was usually the problem being deeper in the water! Anyway, 30 minutes later and we set off up the flight. 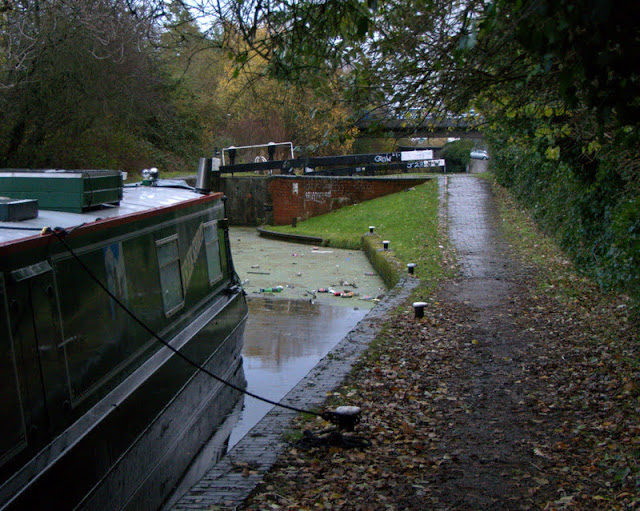 As I ascended, a cyclist came tearing down the towpath. He came to a stop by Ian and said in a Brummy accent, "You won't get very far mate because there is no water after the third lock." Oh no, not again! I thought. Ian decided to walk up and check for himself, I was still in the lock so what to do??? I was reluctant to stay, felt I could become a sitting target, and thought it would be preferable if I headed off to the next lock landing. In hindsight, I should have stayed where I was until Ian returned but, as Ian always tells me, I always know better! So after closing the gate, I inched forward and then realised ahead of me was what looked like shopping trolleys obviously thrown from the pedestrian bridge! 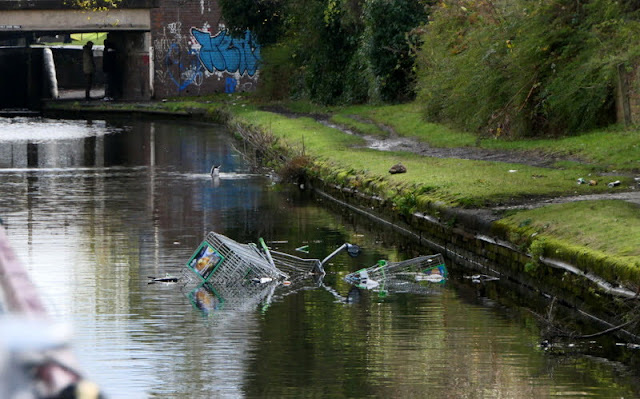 And not only that but right by the lock landing and under the road bridge, two youths. I felt a bit apprehensive. Birmingham hasn't the best reputation for being safe. So two things to contend with, was there more trolleys hidden beneath the depths, and being on my own with the boat with those youths in so close proximity, would I be okay. In the end I phoned Ian, told him of my concerns and he said he would return as soon as possible but that I should start making my way to the lock. 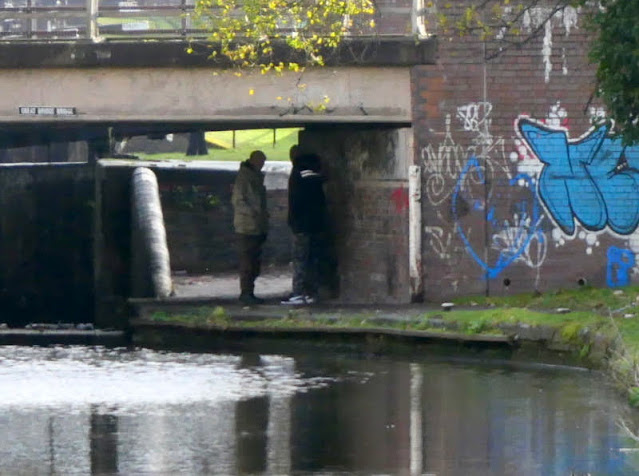 I decided to put the power on  and get through the pedestrian bridge as soon as possible and boy, was I glad I did. FS hit something, tipped to port for what seemed like an age and righted herself with a jolt. Then I spied Ian and the relief was unimaginable. You suddenly realise that those lone boater women must feel very anxious when they reach some undesirable areas. Anyway the lock gate opened and in I went. Very noticeable was the rubbish!! Ian couldn't even close the bottom gate without swinging it several times to get rid of the cans, plastic bags, wood etc, and that in itself was an effort. 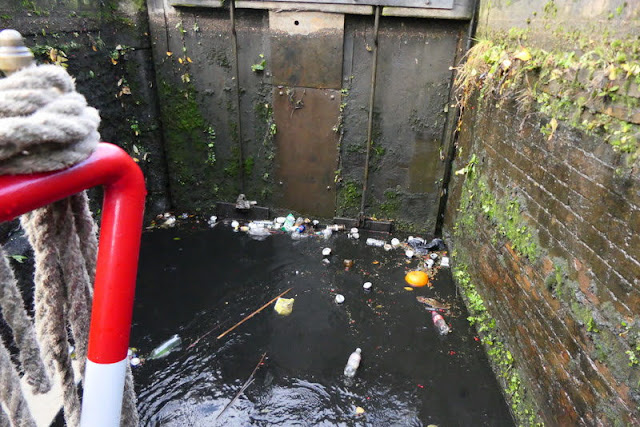 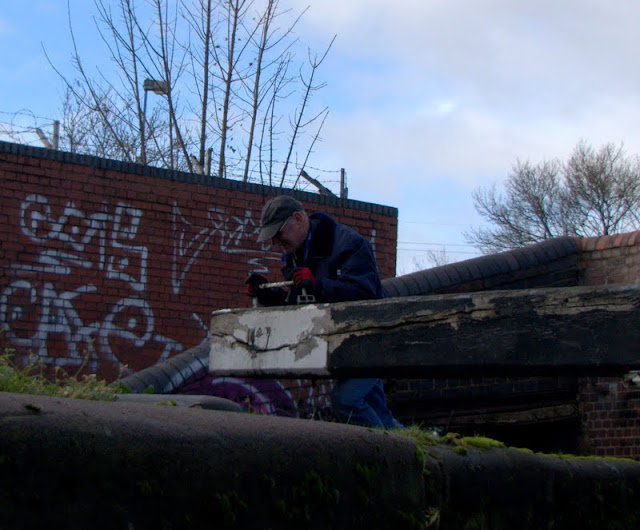 It never did close completely, a small 1-inch gap which we hoped would close as the water entered the lock. It didn't but we still rose up okay, got out of the lock and noticed this pound was down as well. I  took FS toward the lock landing and then, with a horrible scrapping sound I got stuck...well and truly and no amount of using the pole at both ends could shift her. 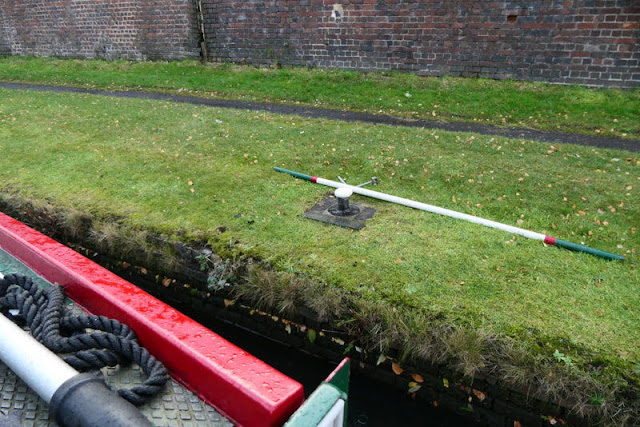 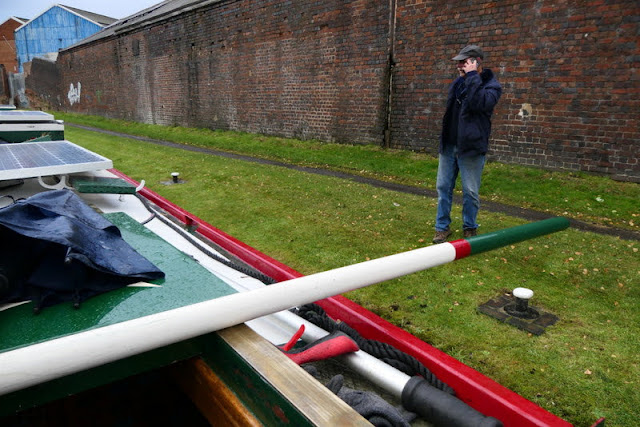 Ian phoned CRT. Told the person at the other end the situation and that he was about to run water down the flight. Good good he was told in no uncertain terms NOT to touch those paddles! Only those trained in water management could do it and he may well make a problem further along the waterway if left to him. For goodness sake, he told them there are several miles before the next locks and filling a small pound would hardly cause any sort of problem but the CRT operator was adamant, Leave it alone! So we waited, 40 minutes later CRT arrive. 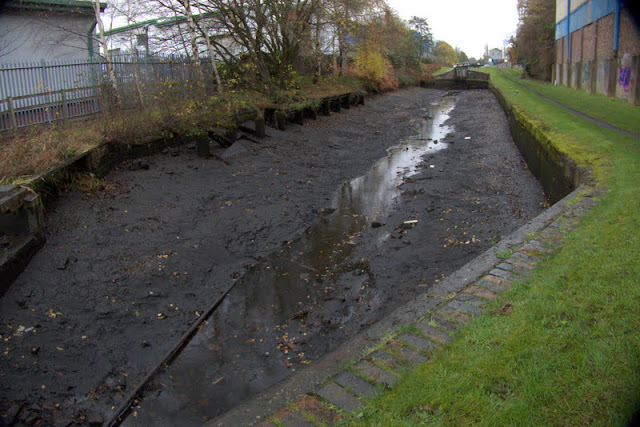 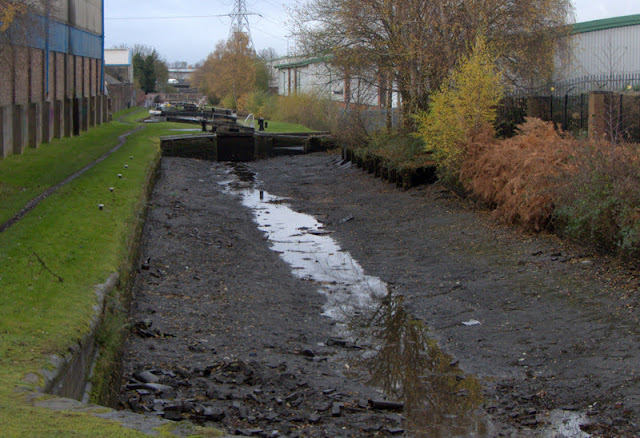 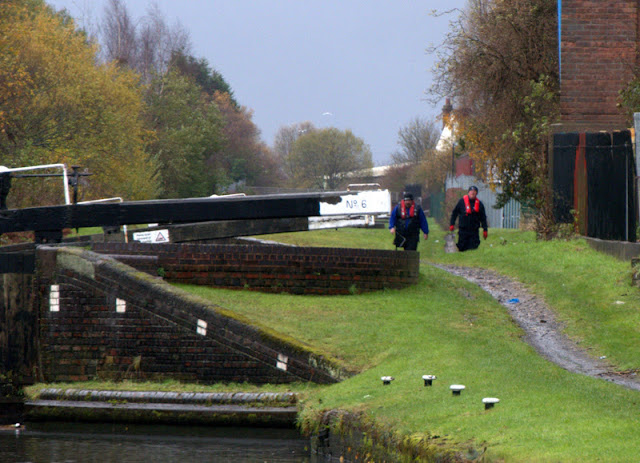 Ian joined them, walked up the flight leaving me with FS. Then 5 minutes later the heavens opened and I'm not just talking about a bit of wet stuff. No, torrential it was, big drops that rapidly turned into hail and lasting for over 10 minutes. I hoped they had found shelter but it was very obvious on Ian's return this wasn't the case. In fact, he looked as if he had been submerged in the canal! Nothing, not even his pants were dry. I got him to strip off in the well deck, Not going to allow him to drip water all over my floor and furnishings! Anyway, he got dry, told me they had raised the top lock paddle by half to allow the bywashes to start running and then they had walked back to their van with the message that they would have another look in 40 minutes time.

After half an hour and with the rain now stopped, I decided to have a look for myself. What greeted me did not look promising! Somehow I don't think we will be going anywhere soon,

Then a short while after my return a CRT bod knocks on the window. Ian was back out up the flight so he relayed the message to me. Now, baring in mind it was nearly 3 pm, he told me the pound would most likely take several hours to fill so it would be best if we stayed where we were for the night. Crikey...that statement was like a red rag to a bull. No way, I told him, was I going to stay the night in bandit country especially as a syringe had been found outside FS's bow, and not only that, but because FS was stuck and the lock behind us leaked from both top and bottom gates, the danger of FS tipping as the water levels decreased was a big possibility. The pound had already dropped slightly since we had been stuck. No, I made it very plain that if necessary we would take the matter in our own hands and do the job ourselves! I think this spurred him on to action because by 3.50 pm Ian returned to say the pound was nearly full and all we had to do was get ourselves free and we could leave. "What did they do?" I asked Ian. "Lifted both paddles on the top lock allowing the water to surge into the pounds and through those bywashes down to the empty pound" he replied. Within 30 minutes that pound was full! Now why didn't they do that in the first place!!!! It's what Ian was about to do before he phoned CRT. Wish we had just gone ahead and done it. Lesson learnt...if you want a job done properly do it yourself. 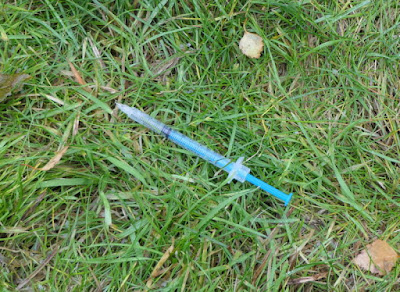 4 pm we were away. Dusk was upon us and I knew that, with a further 6 locks to do, we would be travelling in the dark. This was another first for us, never in over 40 years of boating have we ever done any locks in the dark! Oh, actually I tell a lie. We did have to once. After ascending off the river Trent we then had to descend backwards back onto the river because we discovered the facilities at Trent lock were out of action. The only other facilities nearby was back along the river at Sawley.

That bywash at lock 5...OMG, if I thought the Shroppie bywashes were bad this was 100 times worse. "Make a run at it" said Ian in an authoritative voice. Hmm okay for him just standing by the lock gate. Yea right, I thought. Well in for a penny.... then, OMG again. Power was on, I pointed the bow slightly toward the flow and left of the lock opening with hopes the push of the water would get me lined up but no...That flow was so bad not only did the bow head for the brick wall, so did the rest of the boat. I swung the tiller to the right, the bow responded, but FS's middle and stern didn't. The bow went in and I always say if you get the pointy end in the rest would follow. Oh it followed all right, the boat slammed one way against the wall and then another, I managed to knock back the revs and was convinced a multitude of breakages had occurred as unwelcomed sounds were heard from inside. Oh God, was this going to be the same on every lock up the flight? Once FS was up I raced inside to check what was broken, but there was nothing, The picture frames had fallen off the shelf yes and one of the kitchen chairs was on the floor but gosh, I got off lightly considering.

The journey up the flight was interesting. It was getting harder and harder to see the edge of the lock walls as I approached, even though the headlight was on. It was set up for tunnel use and pitched slightly to the right, completely the wrong angle to see the walls. By the time we reached lock 1 I drove the lock almost blind. Thankfully all the rest of the bywashes had a gentle flow so no more trying to run the gauntlet of the surge. 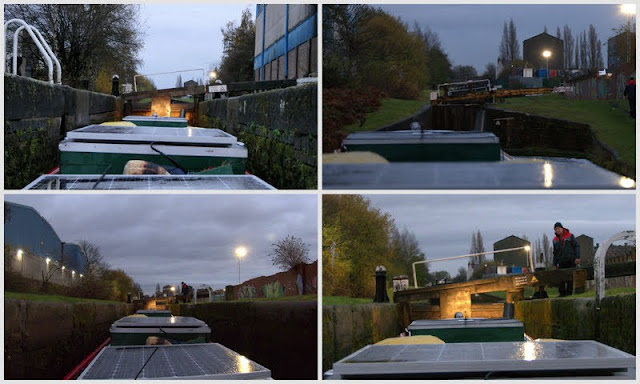 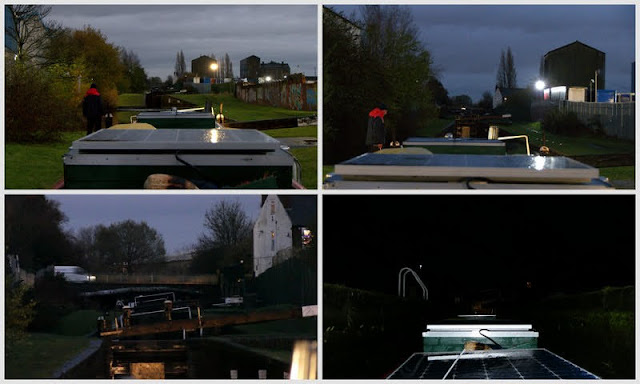 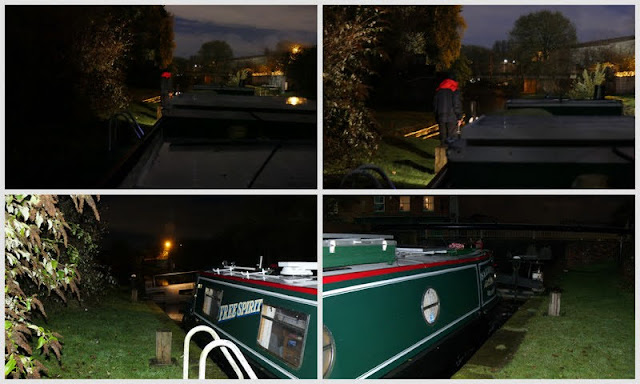 At the top of the flight and on the off side is a lovely mooring just right for one boat. Whether this is an official stopping place I don't know but we have stopped here in the past. Anyway, after the journey we have had today, I would have argued my case if challenged.

Posted by Ian and Irene Jameison at 5:05 pm

Phew, what a day! We had to be hauled off a trolley at that lock by Asda, getting stuck at a worrying angle uder the bridge! though we only had to wait an hour or so, and thank goodness for mobile phones. 2 very large men it took, with no help from the engine to start with as the propeller was half out of the water! We found the bods with their tinnies hanging around the locks to be friendly enough, but then it was daytime. You deserve a little red something this evening to soothe your shattered nerves and no mistake.
best wishes
Debby x

Thank you, Debbie, So very glad when we finally reached the top. Who said canal boating was boring? Trouble seems to follow us around but it does make life interesting. Xx

Every now and then, back here in NZ, I feel nostalgic for being on Waka Huia. But posts like yours have me thinking 'Nah, let's just stay put here.'

And re your reply to Debby: remember that it is a Chinese curse about having an interesting life, girl!