So much has happened today and none welcome so where to start? Right at the beginning I suppose, but because the day has been full of unwelcomed surprises this tale will have to be told in two parts.

A cold a drizzly start to the morning, in front of us were the 9 locks of the Rushall flight.  On our mind was that conversation with that local yesterday about the low pound by lock 6. Would it be a problem?

Well no....rather the opposite, there was too much water in the pounds! If the pound before lock 6 was usually dry then it was because of the appalling leakage through the bottom gate cill. No photo of that but I did take one at lock 8 which was just as bad. Then between lock 4 and 5 the towpath was flooded,  Ian paddled his way through much to my amusement.  His so-called waterproof walking boots, turned out not to be as he unhappily found out. All the rest of the locks had the same issue, too much water. The entrance to Lock 3...well I couldn't see the sides. It was a complete guess as to where I should aim and it was more by luck than judgement that I got in unscathed. So plenty of photos of the first of what was to become a very challenging day. 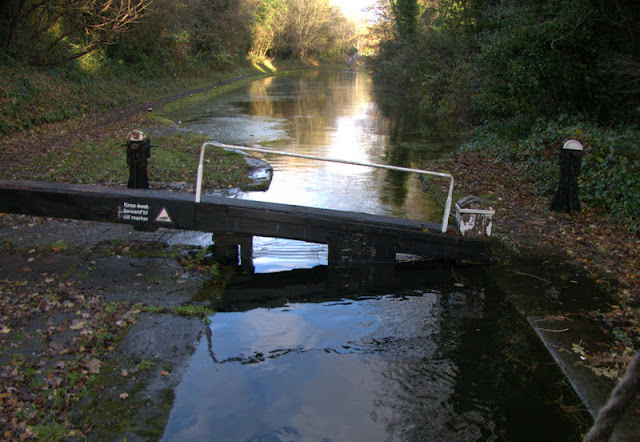 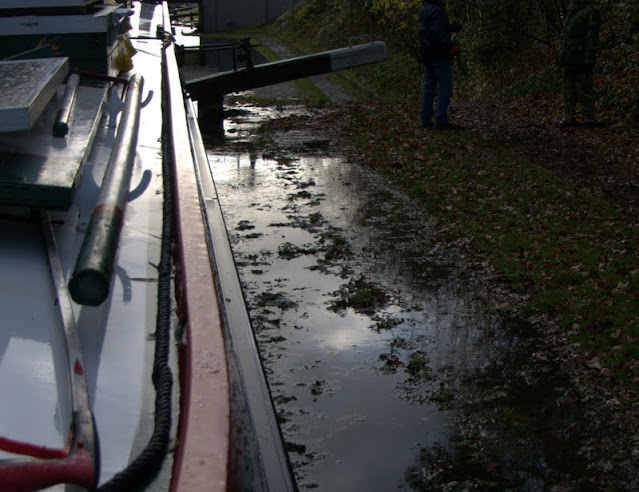 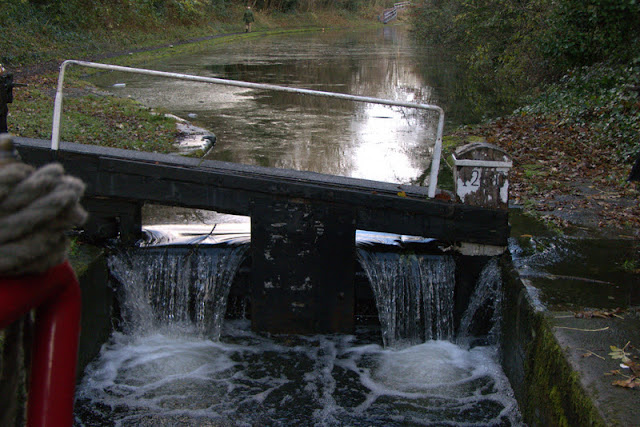 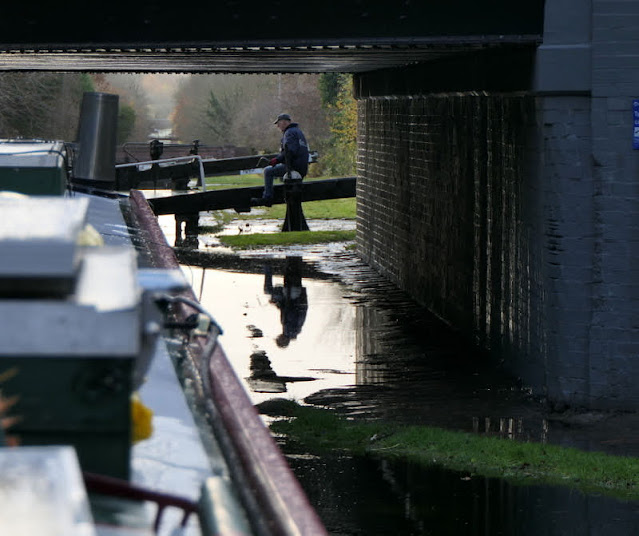 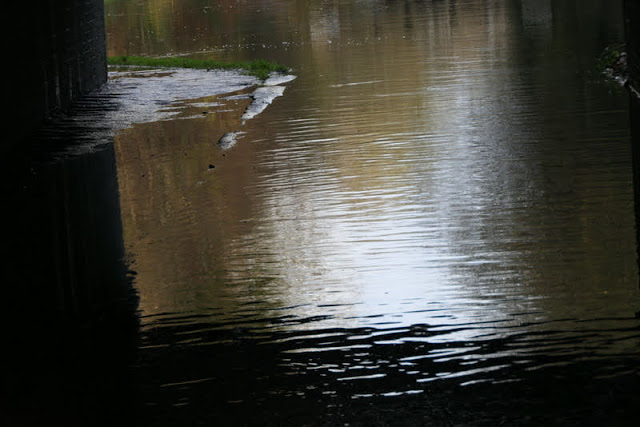 Quite glad to reach the bottom of the flight, I know Ian's feet were! Boots off and placed by the fire, socks straight in the washing machine. This was not to be the only time he got drenched today. More than just his feet though, but that is for tomorrow's post. Anyway a boat was seen on the move. Wow, in 5 days we felt we were the only folk out and about at this time of year. But the boat was a CRT workboat. Piling had been replaced after Shustoke bridge, a long length of new moorings, so we were informed by CRT. Hope they dredge as well 'cos it doesn't look too inviting at the moment! One to mark for the future in Nicholson's book me thinks. 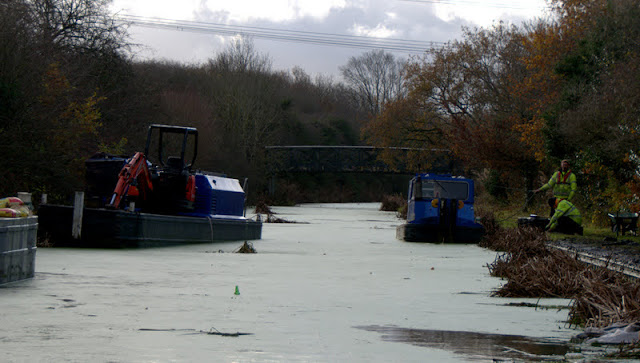 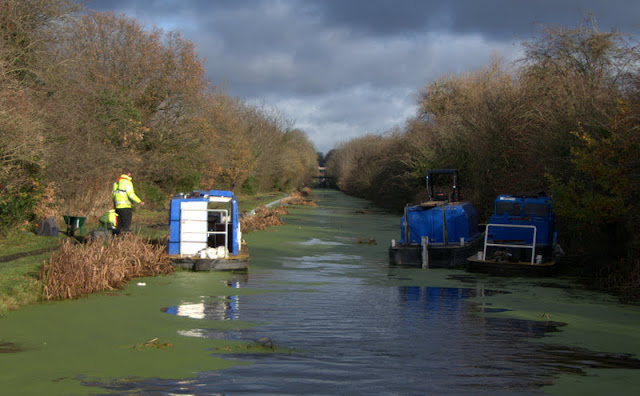 And a very pleasant surprise for a change, A kingfisher skirting the water in front of us and landing on the new piling. 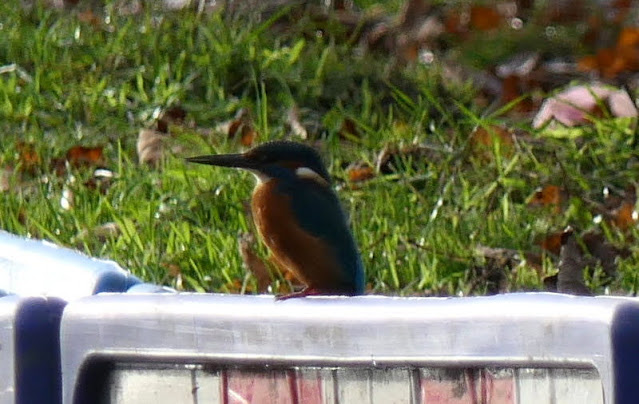 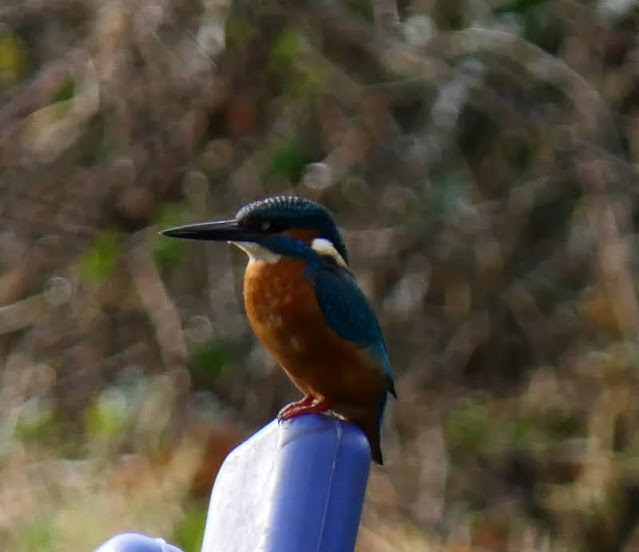 At Rushall junction we turned right, onto the Tame Valley Canal which is straight...well almost straight apart from two slight bends it goes on for 3.5 miles and this is where the second of the unwelcome surprises came in.

This canal takes you alongside the M6 and over the M5 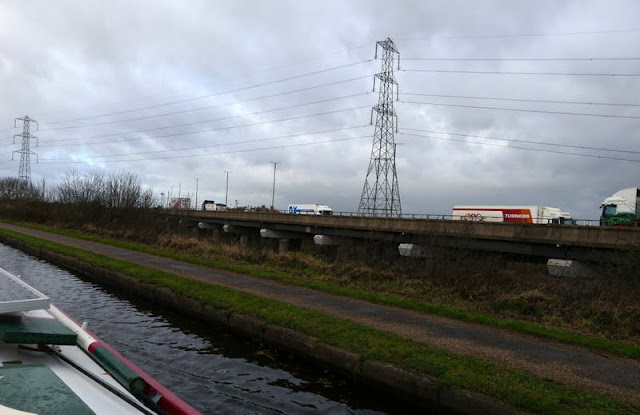 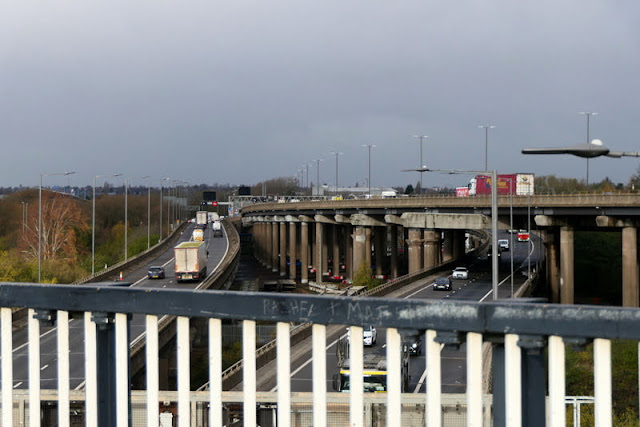 In the distance I spied one of the narrow sections, This in itself was not unusual because these narrows are all along the Tame Valley and Main line canals. Why they are there I have no idea, maybe someone will enlighten me. 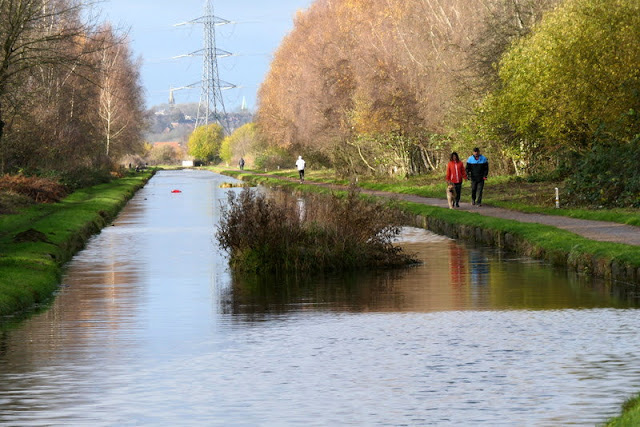 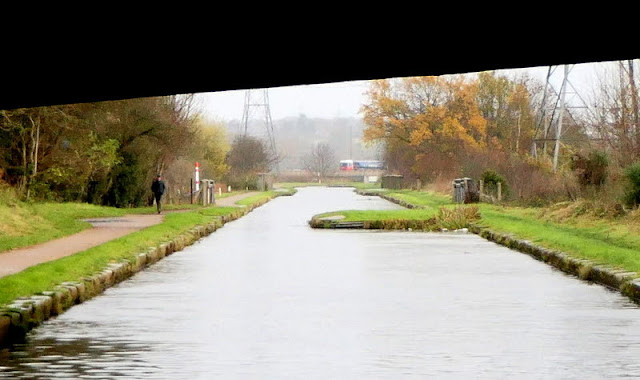 Anyway, getting ever nearer I was puzzled by how narrow the channel was. Surely FS won't fit through that! 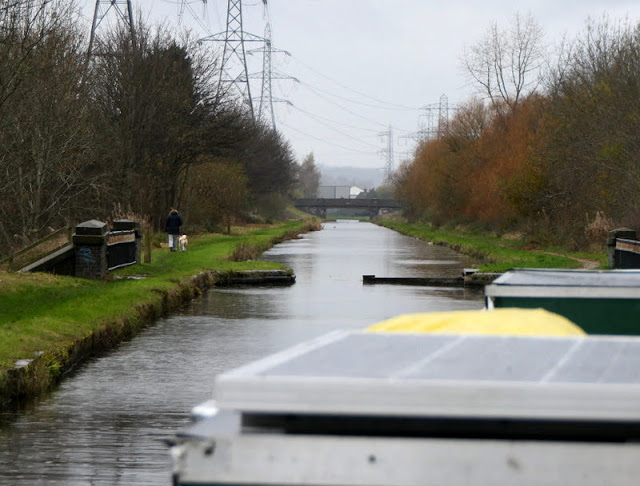 Time for a think. Ian was below and ignoring my calls. Nothing for it but point FS toward the bank and leave the helm to go find him. Just returned in time to stop FS from a bank collision, got Ian off, he grabbed the boat hook and I waited to see what was to happen. 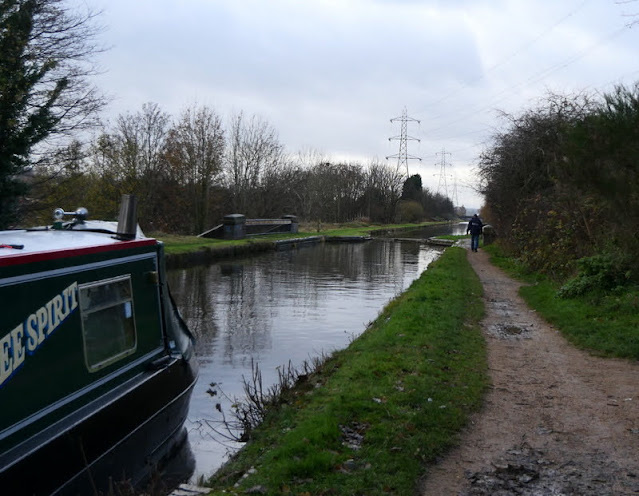 Ah, now I knew what it was, a stop gate! 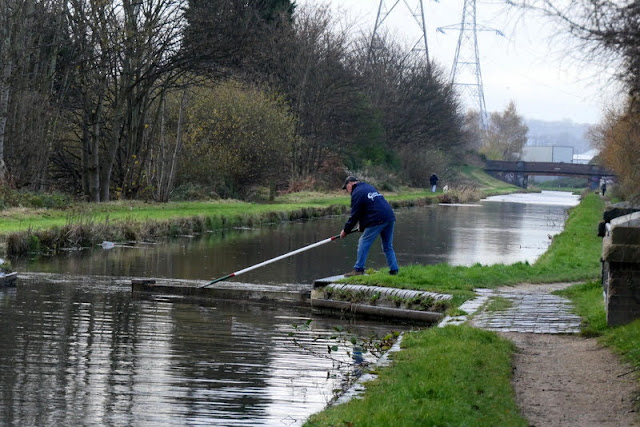 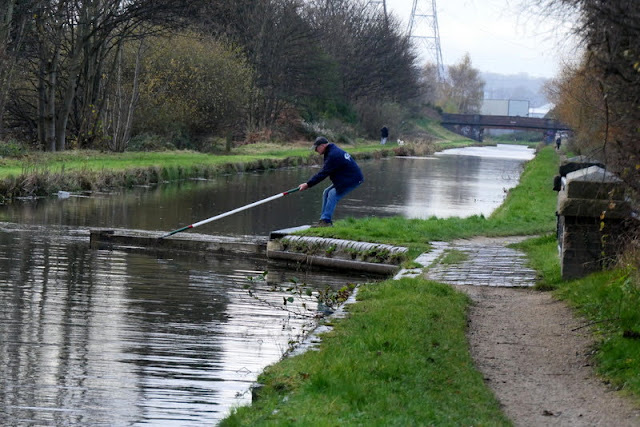 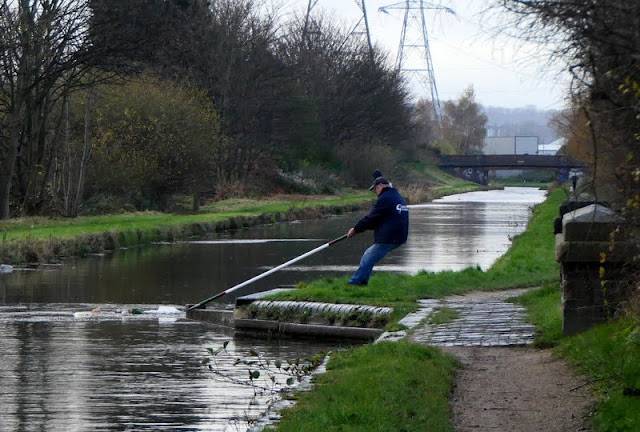 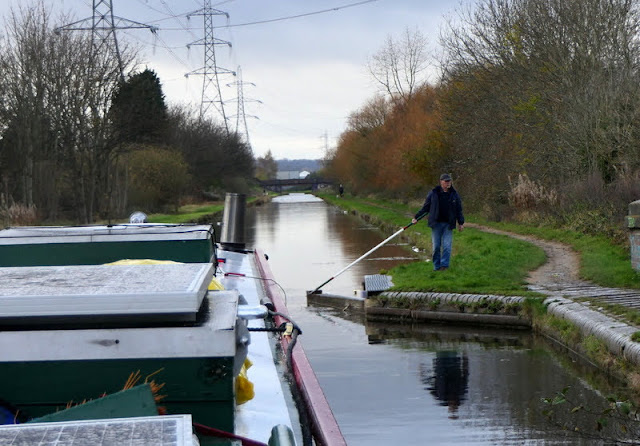 As FS went past the gate swung back and because the boat hook was still attached to the gate, the metal hook made a horrible scraping sound on the hull. So much for our efforts in blacking the hull back in June! 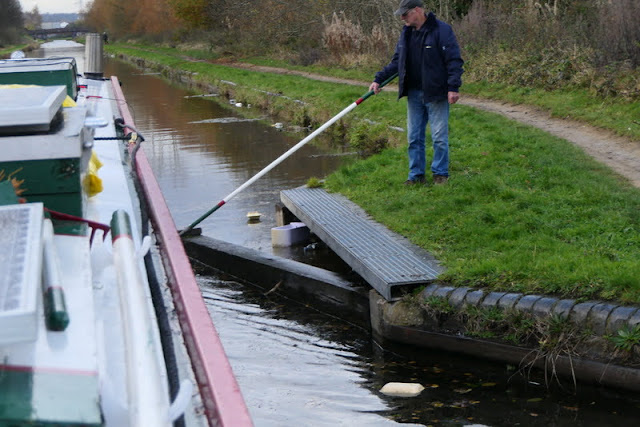 We really thought all our troubles would now be over, Get to Ocker Hill, turn left and then ascend the Ryder Green locks. How hard could that be? Hmm, well... more problems was just around the corner and this will be told tomorrow.

And saw this Nuthatch on a feeder. 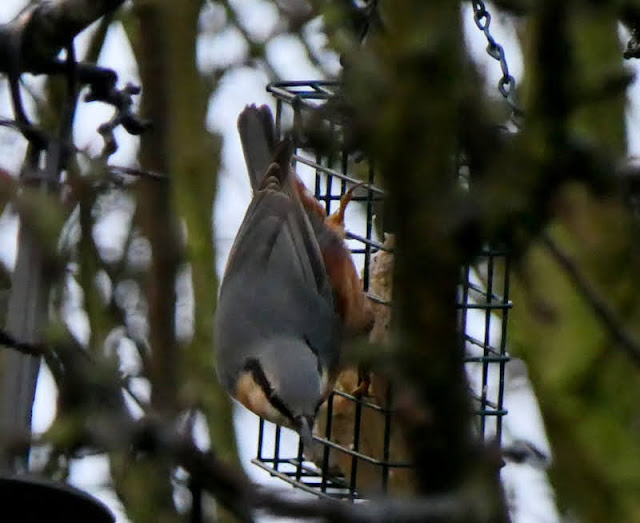 Posted by Ian and Irene Jameison at 5:22 pm

If your experience is anything like ours I suspect I might read about ASDA shopping trolleys in the canal tomorrow!

You may very well be right Tom ;)