"I do love boating...honest," said she who was wedged in a lock!

Another boat appeared, my goodness it's been well over a week since we have even seen another boat on the move. And the good news was he came from the direction of the last of the three locks on the Aston flight. Wonderful, they would all be with us! 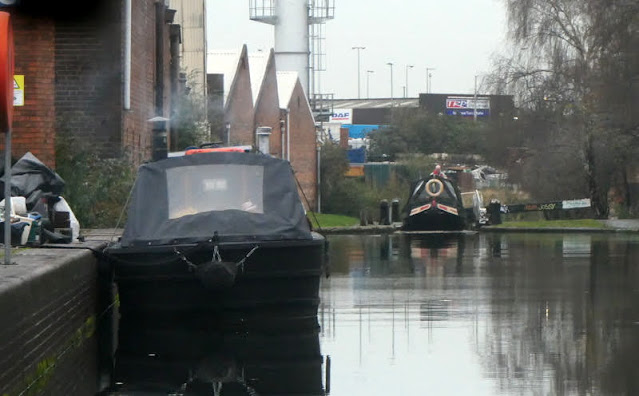 This morning we would have had a full English at the café and so looking forward to it but then a disappointment. They were shut! Seems with all the offices closed over the weekend there was no need to stay open. Even that small general store was closed! Back to the boat then, slice up some of Ian's disastrous bread of yesterday and make our own full English. I must say that bread of his, even without the yeast, tasted great as fried bread.

Getting underway on another cold clear day meant lots of warm clothing. I actually counted up how many layers I was wearing. 14...including hat, coat, gloves and scarf. The usual underwear (2) then socks, thermal leggings, leg warmers, thermal vest, ordinary vest, T-Shirt, jeans and jumper. No wonder it takes me an age to dress!

The first lock went without a hitch.  Arrived at the second lock and it was empty. How can that be unless the lock leaks like a sieve. Anyway Ian gets it filled and as I enter, a word of caution from Ian, A builder's bag was seen in the water and he failed to grab it as it slowly sunk beneath the surface. Must be careful then on exit of the lock and maybe try coasting out. Down I go, Ian opens the gate but then it stops. Pushing against it gave me a little more room so I decided to try and get out. Bad, bad move! I came to a stop. Oh dear, I tried a short reverse. Well the tiller was all but grabbed out of my hand and jerked alarmingly. The engine note changed meaning it could stall at any moment. I knocked it out of gear as Ian shouted at me to try and go back. For Goodness sake Ian...I couldn't...there was no way. I eventually manage to relay the fact that the prop was being held fast by something and we both deduced it must be that builder's bag. So here was the situation, Ian is above still trying desperately to open the gate, I'm below now wedged and FS has been rendered immobile! There was only one solution, abandon the gate, switch of FS's engine and for Ian to go down the weed hatch again. 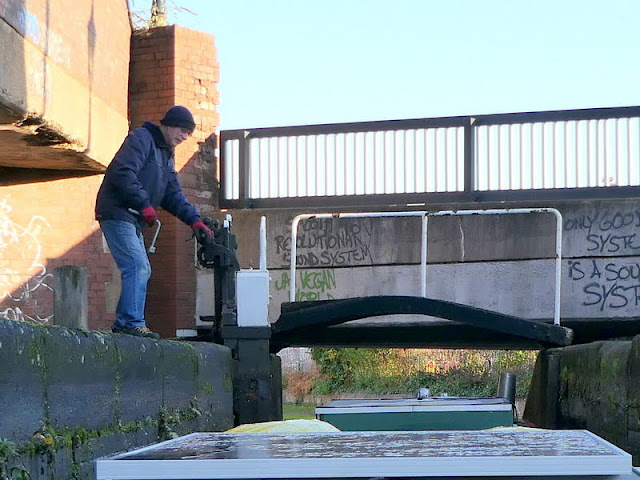 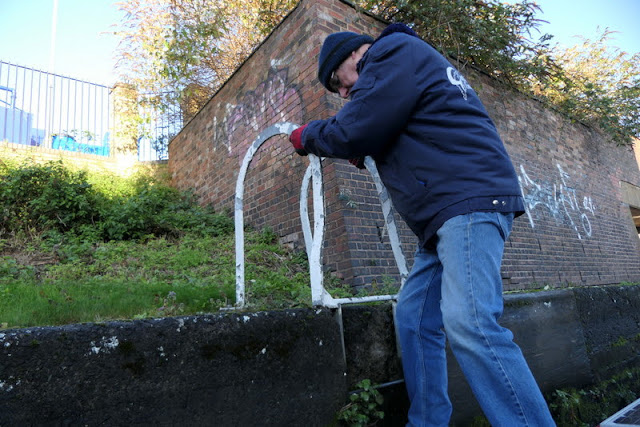 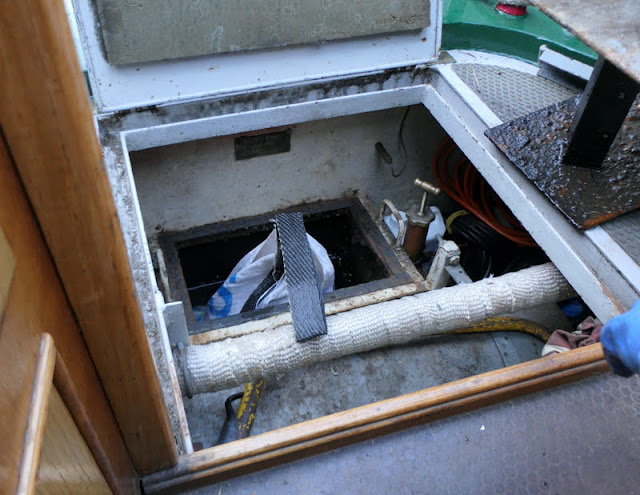 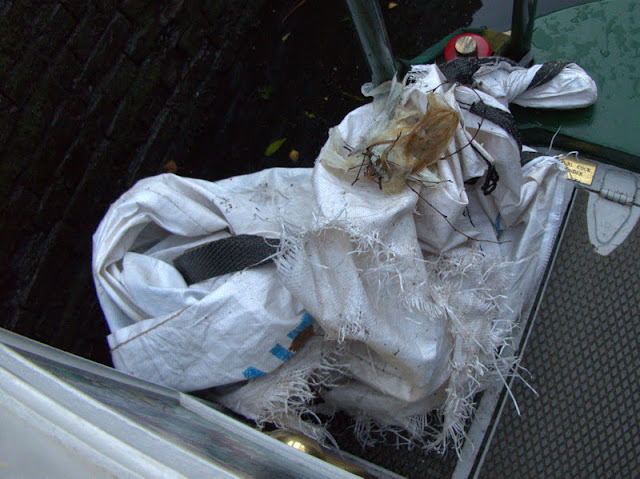 One problem sorted now for the other. First the removal of that bag off the stern. I wasn't going to trail it through the boat and into the well deck. No Ian could do that when and if I ever got out of the lock! 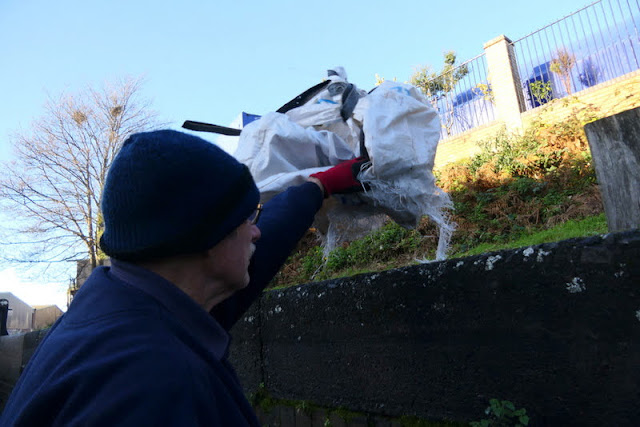 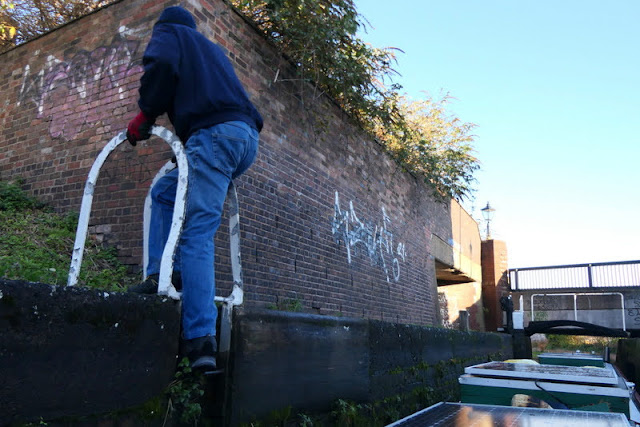 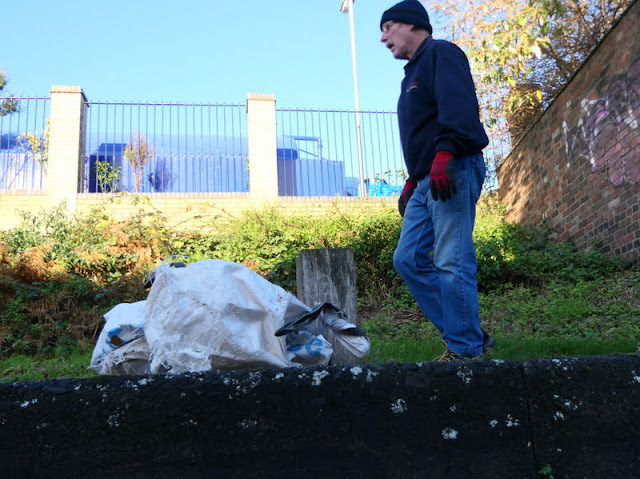 Instead of me going back into reverse, Ian suggested I put the revs on and try to drive FS out. In the meantime he put all his weight and strength up against the gate and sure enough with an awful scrapping sound FS slowly inched her way out. As soon as she stern was free she shot forward as if all the bats out of hell were after her. Oops I hadn't realised just how high those revs were! Still, she was now free and we could get on our way.

No issues with the third lock, and it was full so still baffled as to why the second lock was empty.

It gets a bit confusing at Salford junction. As I approached it looked for all the world that I was about to join onto another canal but no, to go left the start of the Tame Valley Canal, and turn right continues on the Birmingham and Fazeley. Then just as you make the right-hand turn onto the B&F there is yet another right turn taking you this time onto the Grand Union canal.  No wonder they say Birmingham has more canals than Venice! 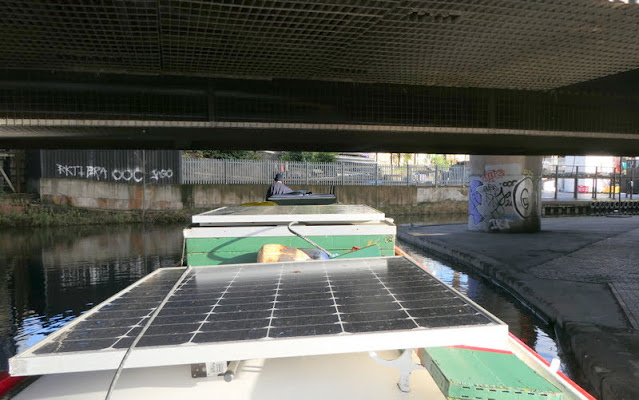 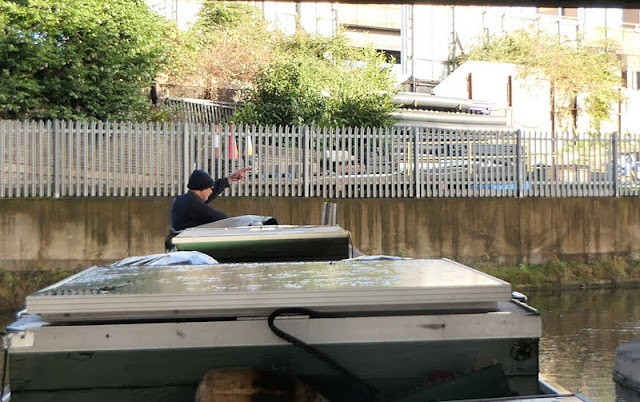 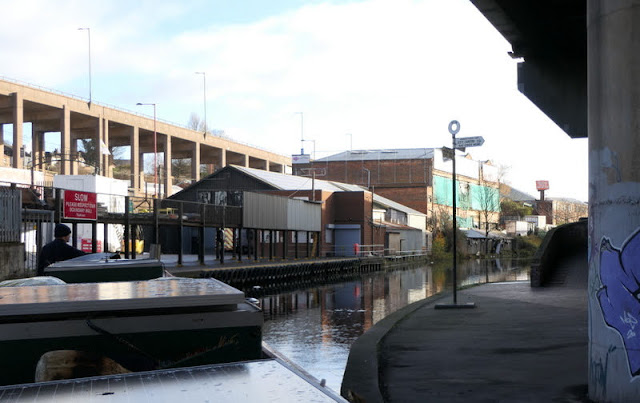 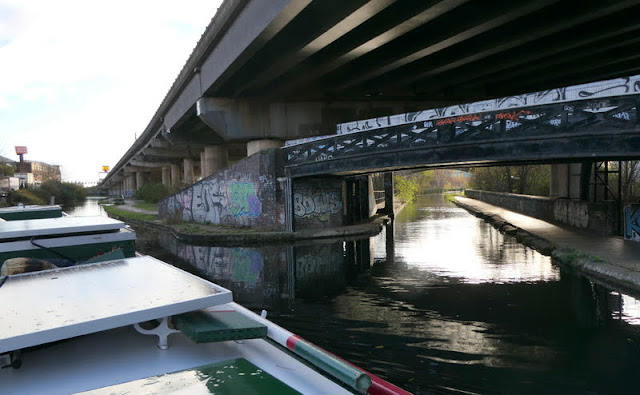 If we had of turned left onto the Tame Valley then the thrill of going under Spaghetti Junction would have been ours, Instead this was the only part we travelled along. 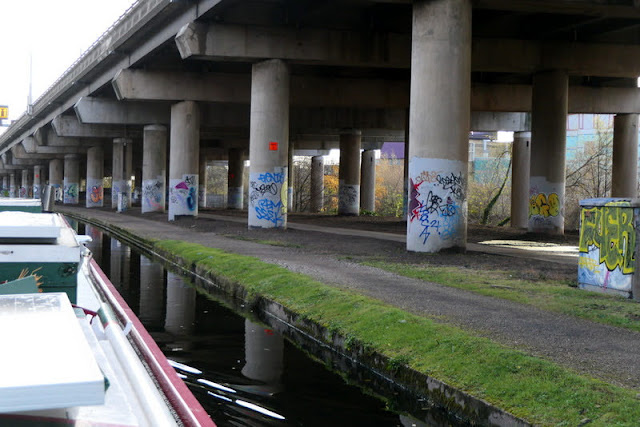 In the distance, an interesting object could be seen laying on the ground. Looked like a torched motorbike. 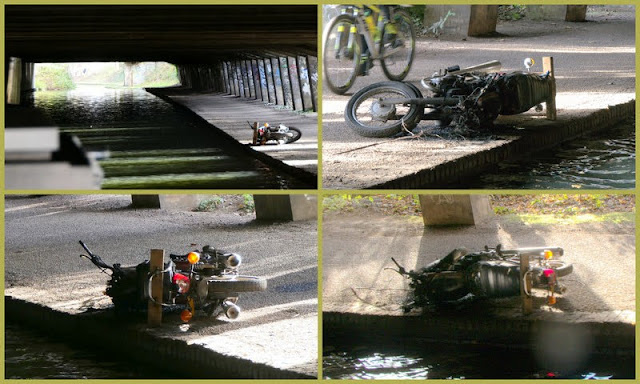 Heading away from Brum I had hoped the rubbish would decrease, Appears not as seen at the top lock of Minworth flight. 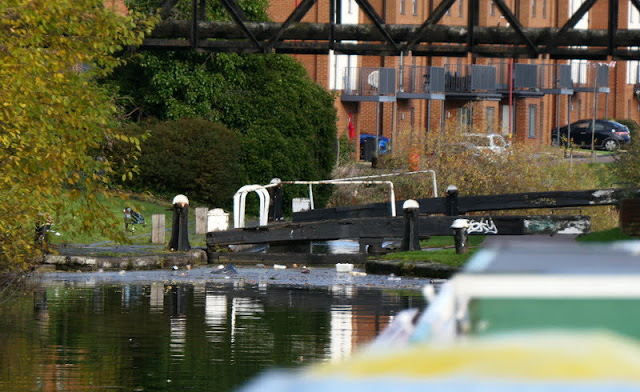 Second of the locks and judging by the top gate paddle  up, yep I think the lock may well be full. 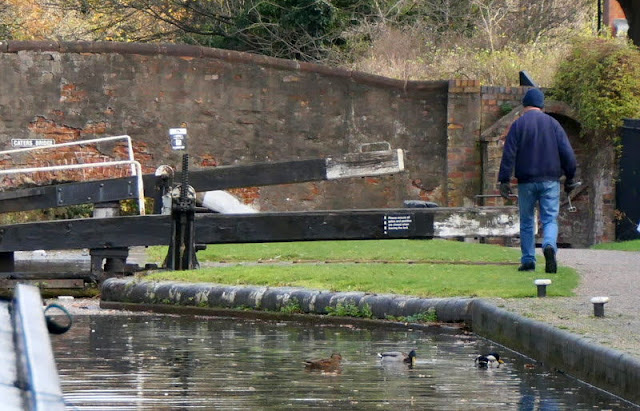 This afternoon we had an early stop, not on any official visitor moorings but away from any light or noise. The wind has picked up and the canal has waves! Could be an interesting night.

Oh and this was the damage to the handrail yesterday. Going rusty already!! 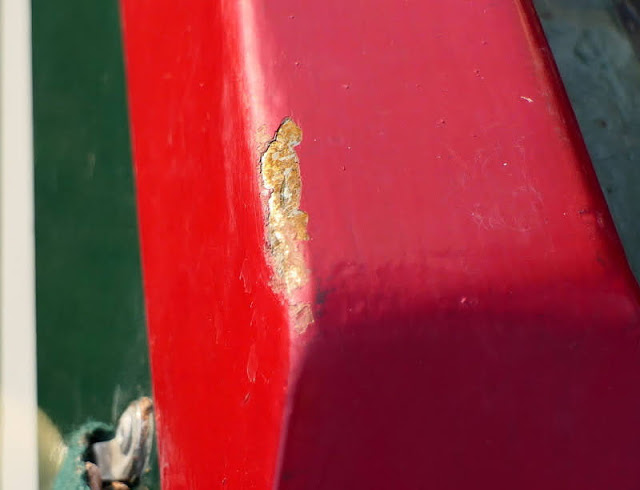 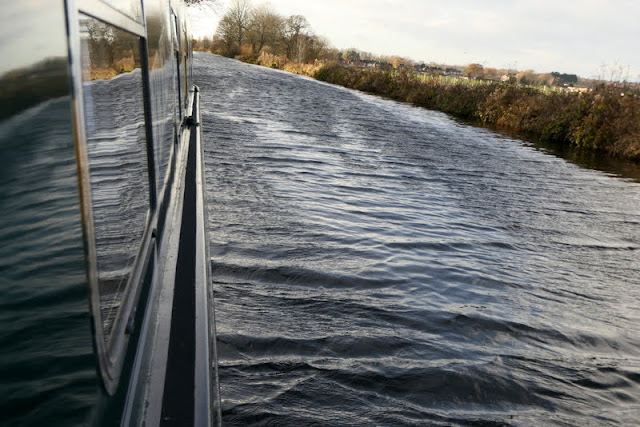 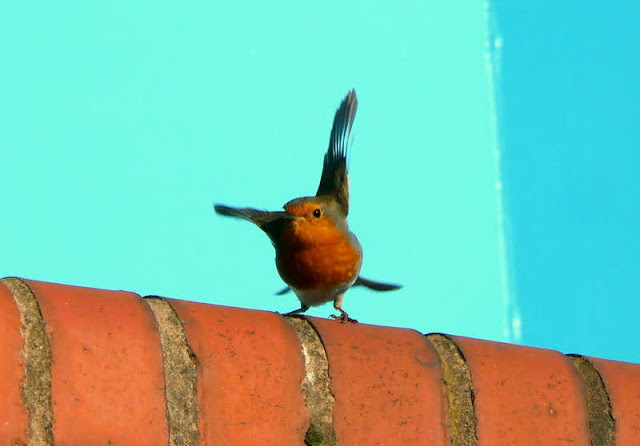 Can you give me any more details on the café, I am planning to moor there tomorrow night so Breakfast on Thursday would be nice. I have moored there before but never wandered round the complex.

Hello Brian. It's open from 9 I seem to recall but if the offices are closed for Christmas, the café probably won't be open. Not enough footfall. Try it anyway, it's on the left as you go through into the complex.

As you will see from our blog we didn.t get that far http://nbharnser.blogspot.com/2021/12/cuckoo-wharf-birmingham.html