It was to be Robins Hood Bay for us today. Wall-to-wall sunshine and a day by the coast would be a real treat. First though, as we were so near to Mallyan Spout Waterfall in Goathland, it was decided to go there first. "An easy walk to the base", was mentioned in a post Ian had seen on one of the wild camping sites and I envisaged a nice casual stroll to the base. Well, whoever put a nice easy stroll on that website should be shot 'cos it was 1/3 of a mile descent down some huge steps to reach the bottom, with some steps so steep it would have been easier to abseil down them! Then, when we got to the bottom, a huge stack of boulders had to be climbed to reach the waterfall. Well, with my knees...no way. I watched Ian go off on his own while I found a convenient boulder to perch on. This was his photo of the falls and I'm very glad I let him do the honour. 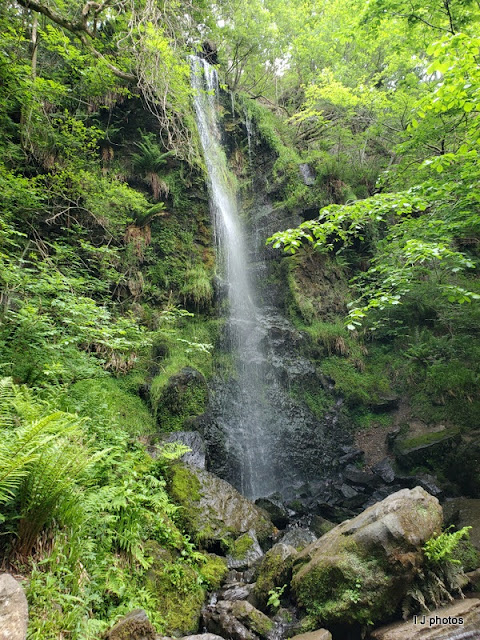 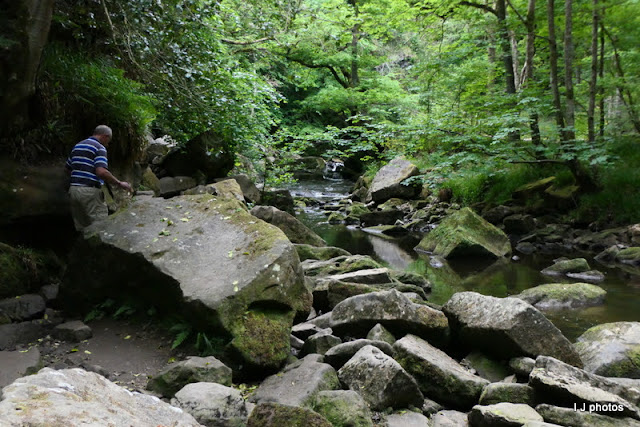 That climb back up, well, what can I say. Took twice as long as when I descended, but what a good cardio workout. It really wasn't worth the effort, though, as we both were very disappointed in the waterfall and I felt I had let myself down on my inability to see for myself. 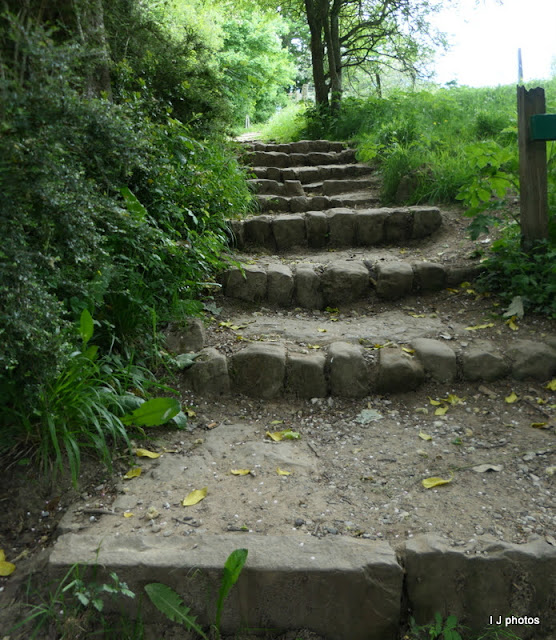 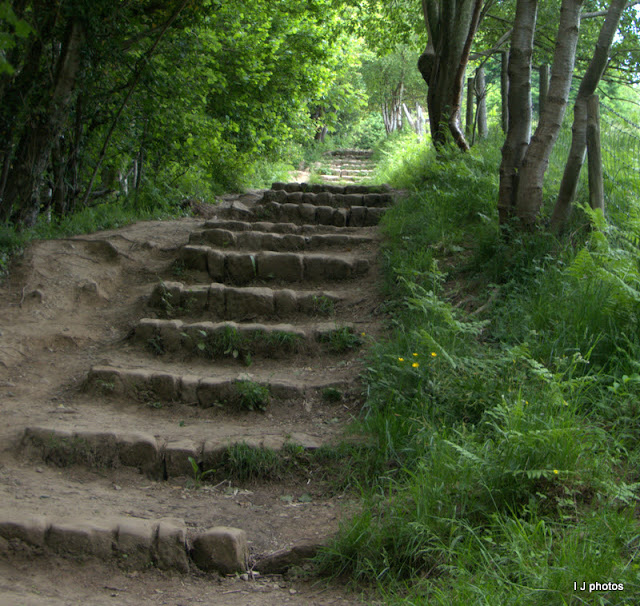 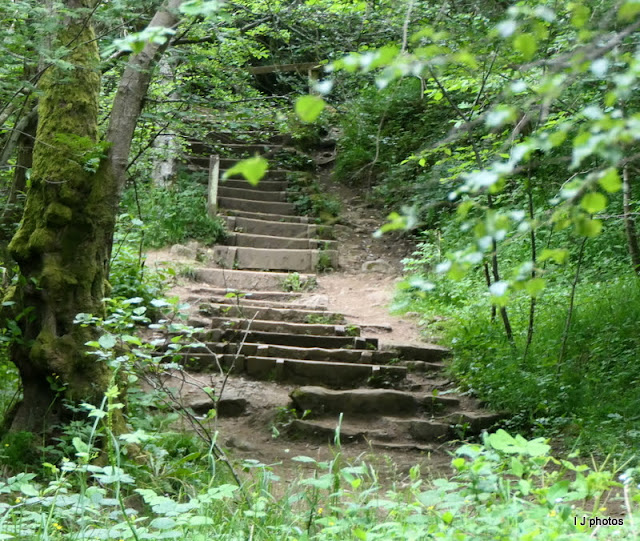 Then with the time now about 10 ish and so near to the North York Moor rail tracks, we found a good spot to watch the Pickering to Whitby steam loco. By 11 am we had all but given up hope of seeing it when in the distance we heard a pathetic whistle. It came into sight but not the steam loco hoped for, no a blooming diesel engine instead! Yet another disappointment. 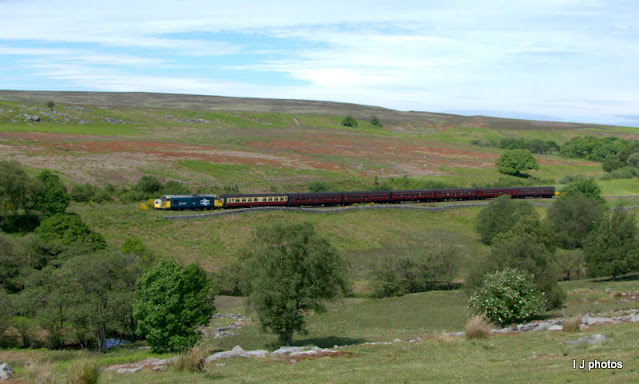 Never mind, Robins Hood Bay was next. Got some tantalising glimpses of the North Sea as we drew near and couldn't wait to dip the feet in and test the temperature. But could we find somewhere to park? Could we heck!!! The only sighting we had of the bay was on our way out of the valley. 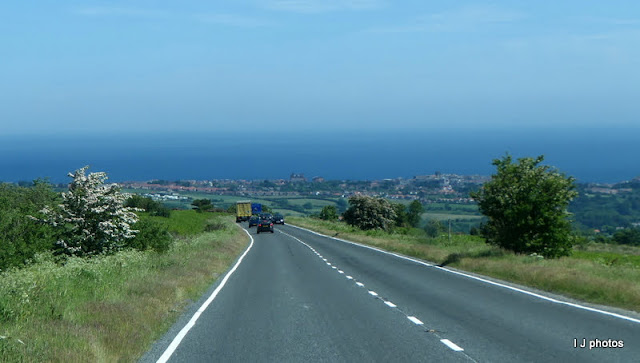 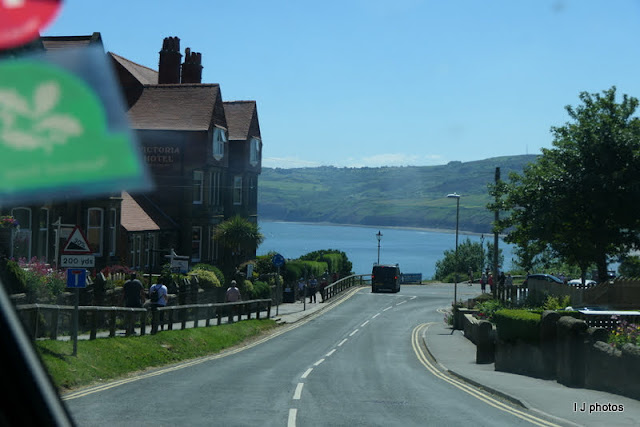 We headed back to Goathland. I had forgotten about the Heartbeat Series set in the 1960s and it was only a chance conversation when I phoned one of my friends that Aidensfield was mentioned. We found Scripps Garage, now a tourist shop and the Aidensfield Arms, the hotel. 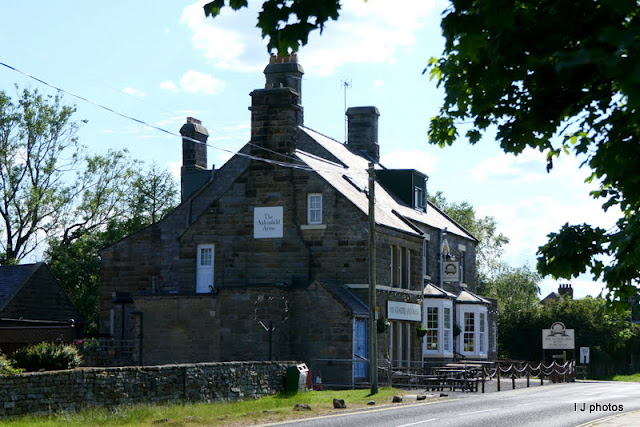 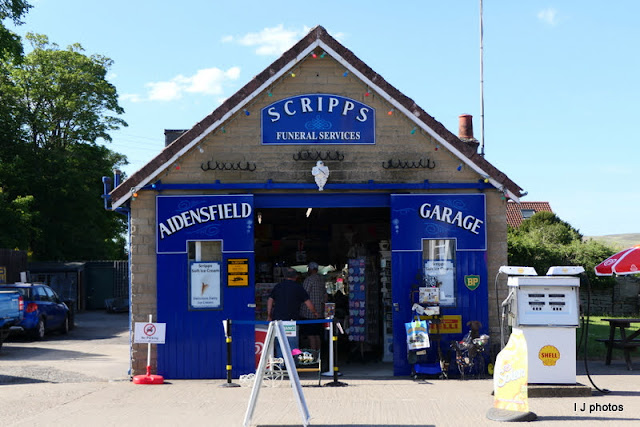 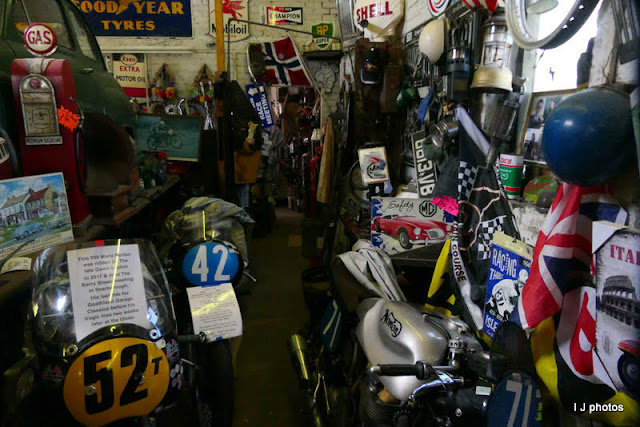 A short walk took us to Goathland station and this time we were lucky. The steam loco was about to arrive, followed shortly after by the Diesel Engine. This was the cross-over point, as only one line was used both ways. 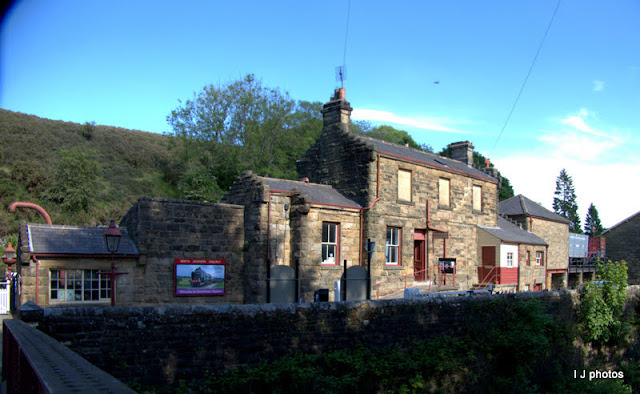 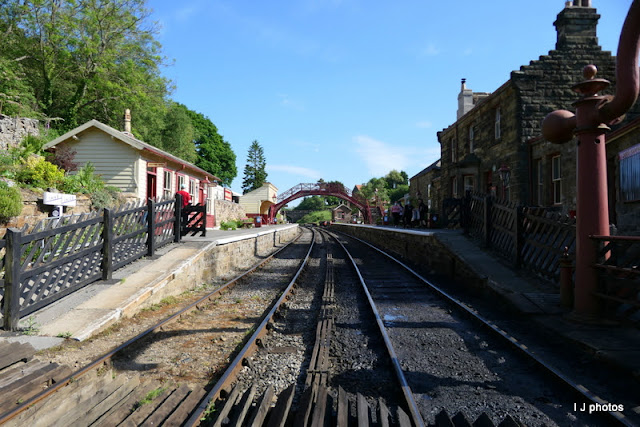 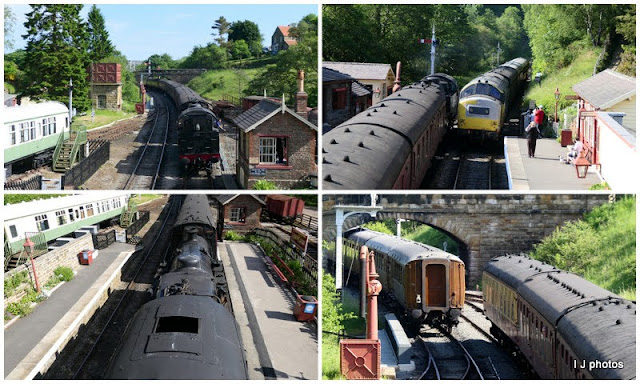 It was on our way out of Goathland to find a park4night that we had the OMG moment. It was to be at a place called Beck Hole. We had no problem finding the spot, Ian put in the longitude and latitude and the sat nav did the rest, but boulders surrounded the entrance to the lay-by, so another option had to be found. This small lane continued over the river and through a small village. It was as we got to the end of the village that our hairy moment occurred!

So, a car was behind us, an almost hairpin bend up a steep incline was before us and as Ian put on the revs to get up that hill, we met a car almost head on right on the bend. Screech of brakes, we all came to a stop.  That car then reversed back up the hill. You would think our troubles would be over as all Ian had to do was into 1st gear, handbrake off, give MB some welly and up we would go. But...the bloody handbrake wouldn't hold MB! We kept rolling back even though Ian made several attempts.  The front wheels kept spinning as all grip was lost on the tarmac, blast, seemed we were buggered. I jumped out, headed back to the car behind, and asked if they could reverse to give MB room for a run-up. Most obligingly they did. Ian then managed to get MB far over to the side of the road with enough room for both cars to pass. Glad about that, as now the coast was clear for the run-up! I climbed that hill to mid-point, checked the coast was clear and waved Ian on. Well, talk about spinning wheels and dust clouds! MB tore up the incline past me, scattering gravel and grit as she went. The top was reached and sighs of relief by us both. Now it was my turn to get to the top. Gosh, that climb was greater than anything I had attempted before (apart from the first bit of Snowdon) and I was completely done in! "We made it then," Ian laughed, sitting smugly in his seat. I could hardly utter a word so breathless was I but the look I gave him said it all!

Eventually found somewhere to stop, not far from last night's camp. Very near to a well-used road so am expecting an early awakening. 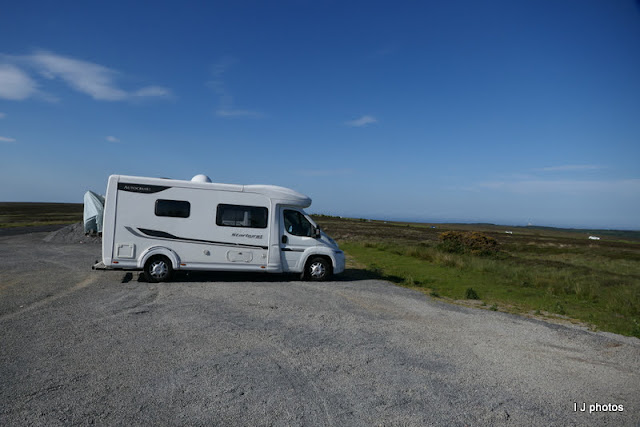 And wildlife today is of a sheep being used as a lookout. I couldn't decide which ones to include, so have put them all on. 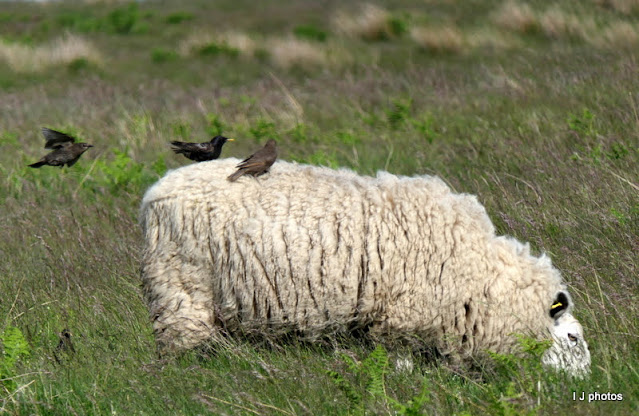 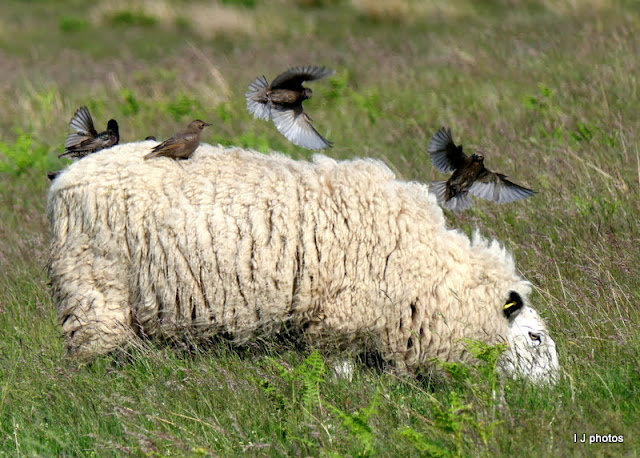 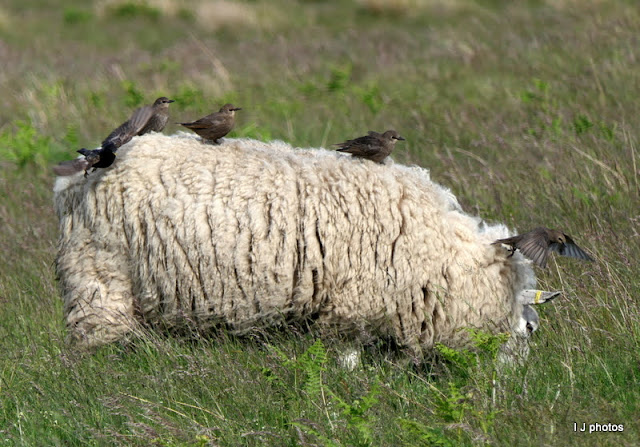 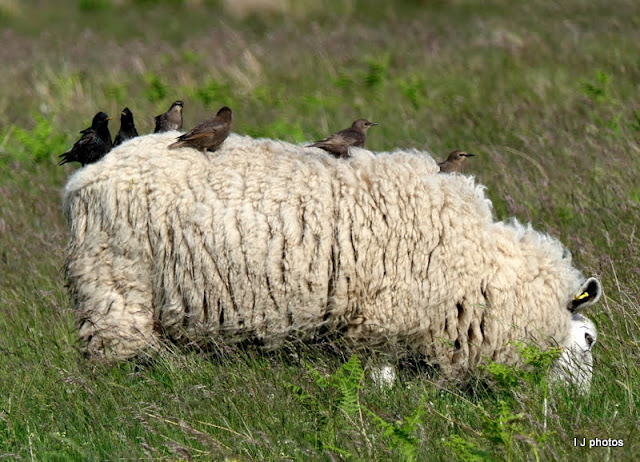 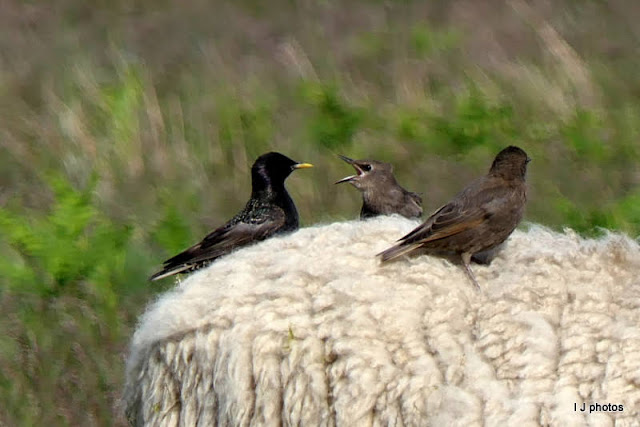 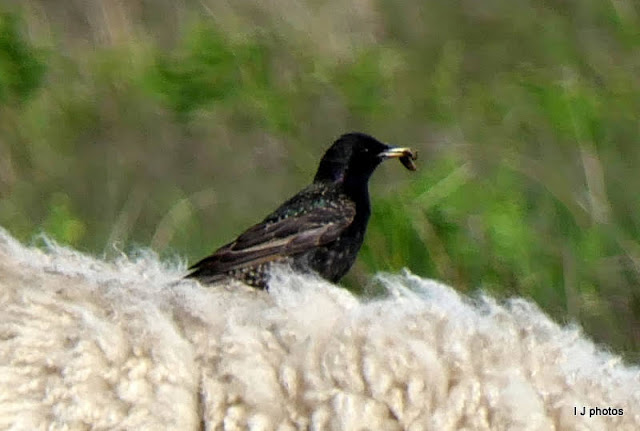 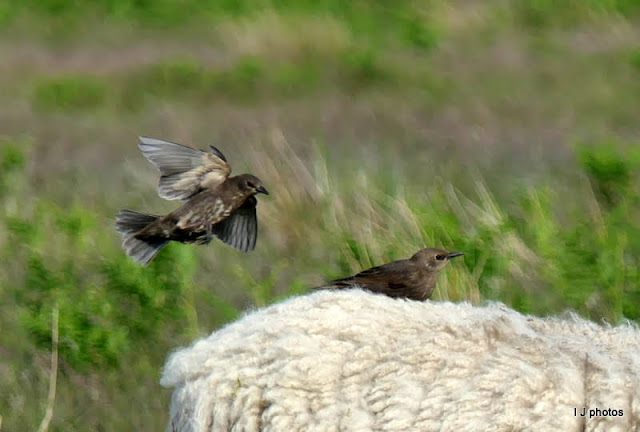 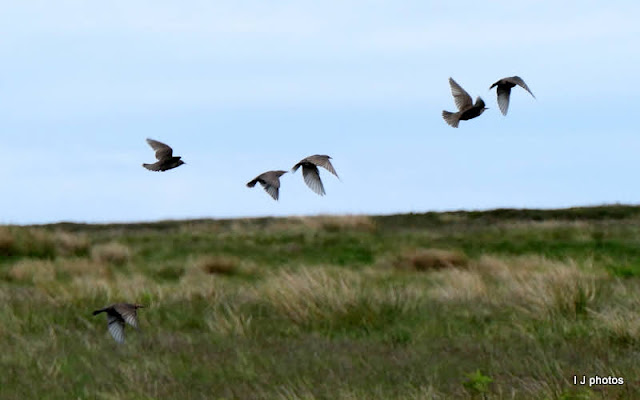 Regarding your "Hairy Moment" - check the Peugeot Boxer vehicle handbook, and look for "Hill Start Assistance". Mine has it and it's described on page 28. I think MB has the same Ford 2.2 TDCI engine as mine, so you may well have this facility. It would get round the problem of the handbrake not holding on a steep hill when moving off.