Friday 14th Another day and the change in weather was most welcome. Sunny and hot we once again took the bus and then the train to Sydney. Out came the Opal cards for the 'Tap on Tap off' fare. What a great system, top up the card first and it is so easy to travel around Sydney and suburbs. In the UK, London transport has something similar with the Oyster cards.

We had arranged to meet a fellow boater, in fact, the owner of Langley Mill boatyard. He was in Sydney setting up all equipment, props, lighting etc at the Lyric theatre for War Horse. Before we left Langley Mill Dan happened to mention he would be in Sydney the same time as us so a meeting became a must. We met him at the backstage door and a small but conveniently placed coffee shop was just yards up the road. Here we spent a good hour discussing all things boaty (gosh I have missed the boaters gossip) before heading once more back to the station. 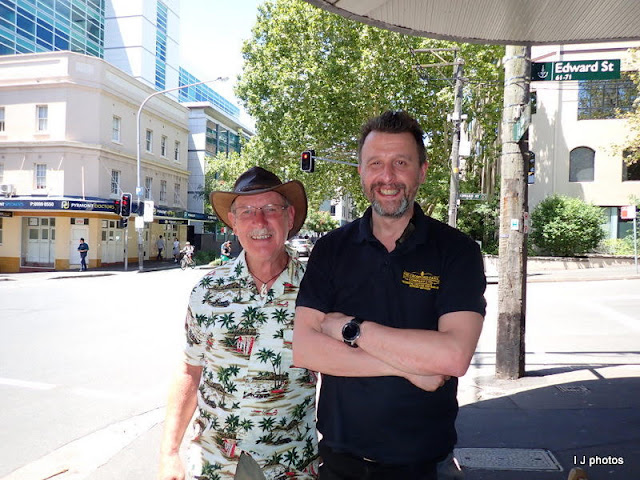 It was still relatively early so stupidly (and you will see why later) we decided on taking the Light railway (called so but more like a tram) to the terminus and back, just because we could and we thought we may see more of Sydney suburbs that way. First though, another walk at Darling Harbour but in the sunshine this time. 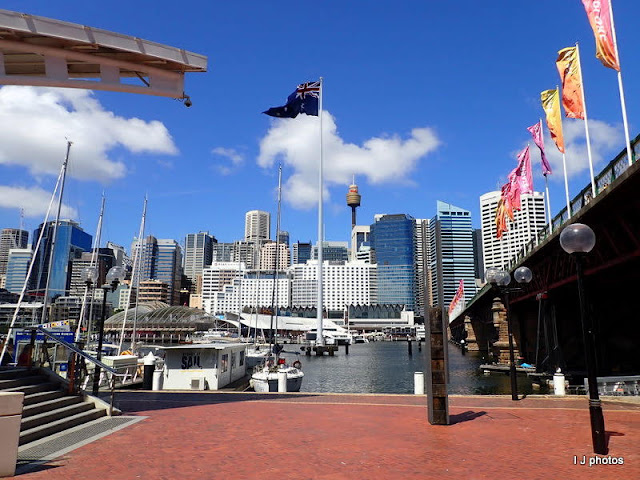 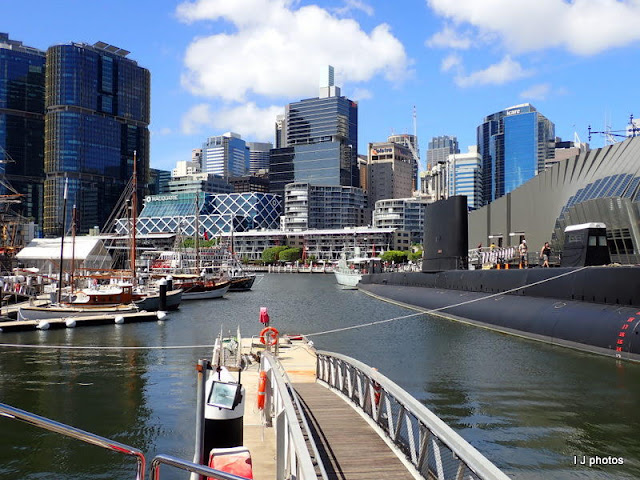 So back to the Light Railway,

We choose the wrong day to travel as some sort of show was happening at the conference centre and the train/tram was pretty full. Thankfully most alighted to go to the show which left plenty of seats to be had. But our timings couldn't have been worse as a couple of stops later hordes of school children lined the platforms. My God, it was bedlam! The doors managed to close after a lot of pushing a shoving and then at the next stop more school children. They were trying to get on, commuters were trying to get off and tempers became frayed. Now whether it is always like this or just because of the show at the Conference centre brought more people out, we will never know but boy were we glad to reach the terminus end. Then with an empty train/tram on its way back and us breathing easily once more, not several stops later and those leaving from work to travel home started to line the platforms. Another full carriage with jostling and shoving and the relief on reaching the stop for Central Station was enormous. It was then one mad exodus off the carriage with everyone trying to tap off with the Opal card all at the same time. It became a game of who got their card on the button first! Anyway, we were ever so pleased to reach Hornsby, catch the bus and get back home. We won't be doing that again in a hurry! 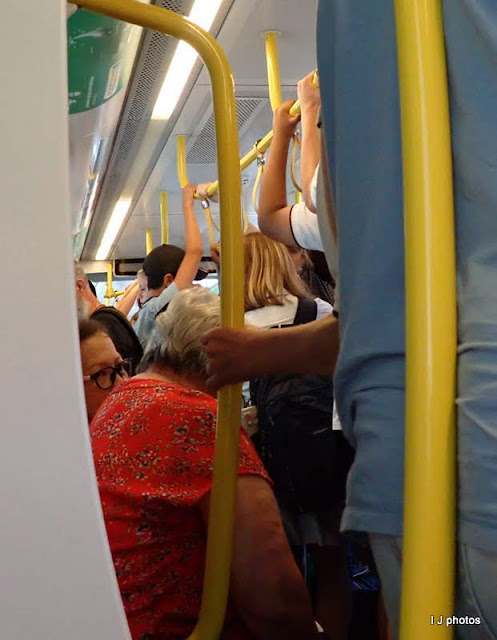 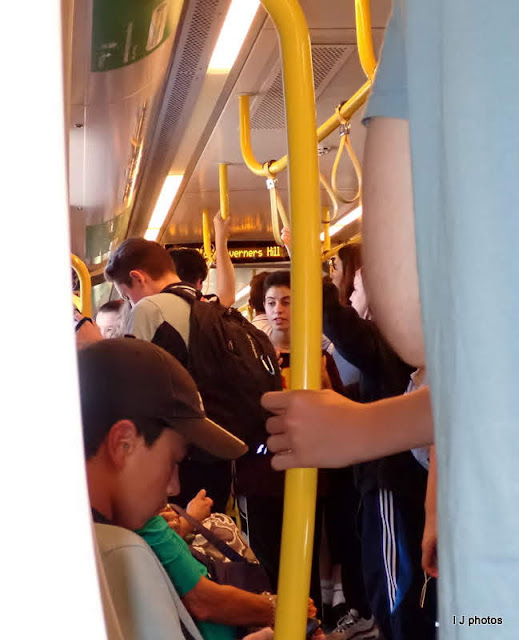 Saturday 15th
We got to meet our Great Niece Maddison. Lizzie came for the morning leaving our other niece Ella (who we met briefly three years ago not long after her birth) and hubby Rich to fend for themselves. With a good three hour drive from their place to here, having a three-year-old and a baby to contend with was not a good idea. Never mind once we return from the Ghan trip early April we will meet up with them all then. 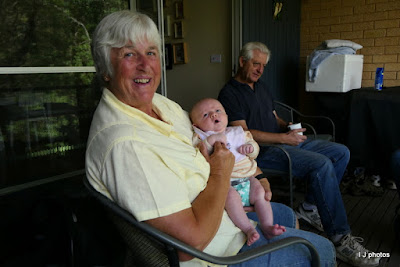 With it being such a lovely day a suggestion by bruv to head out to Jubilee Park with Hank the GSD X. Still so many trees down after that storm last week and still a massive amount of work to be completed by the councils. In fact, driving home last night from the pub, a huge section of Thornleigh suburbs were still without power. One would think we were back in the dark ages with the candles in windows and it being pitch black outside! 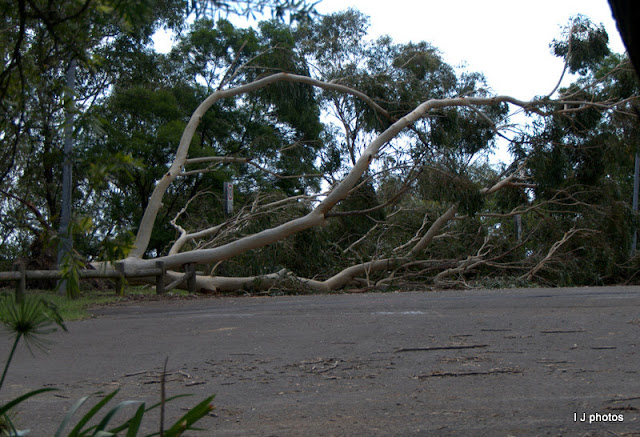 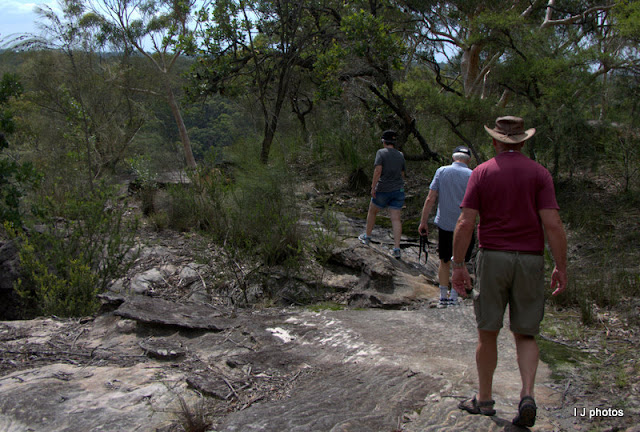 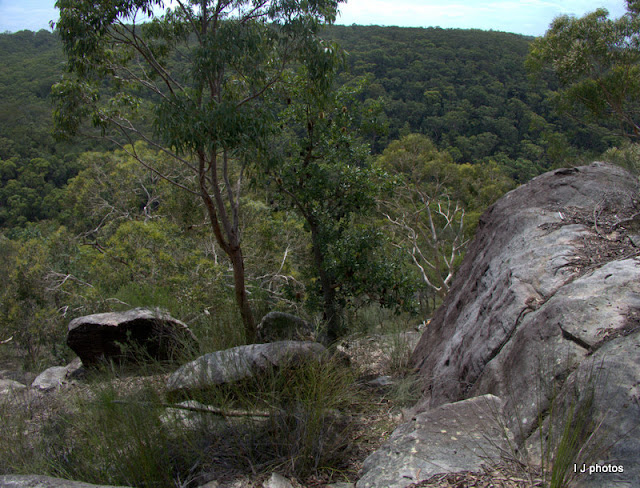 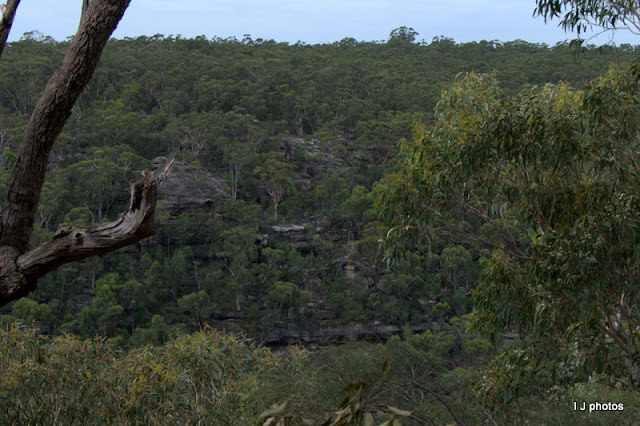 Tomorrow we go to the theatre to see War Horse. A treat and a thank you to Sally and Andy for putting up with us now and for when we return from Tasmania.
Posted by Ian and Irene Jameison at 4:00 pm

Enjoy War Horse, it's a great show. If you happen to bump into Matt Booth or William Ilkley (both actors in the show) give them our love. Pip and Mick NB Oleanna

It was a wonderful show thoroughly enjoyable and moving. Unfortunately, no actors were seen after the performance but when you see the pair again tell them that everyone played their part brilliantly.

They're both great in the show!!