Whats that moving under the fishing peg?

Wow we were lucky!!! Ian found a rather snazzy torch lying by one of the rings in Shardlow and amazingly it worked a treat. Congratulating ourselves on the find we settled down to await our visitors. Slight change of plans came though, when a phone conversation with Alan said we should meet in Sawley instead. So pulled pins and made the short hop from Derwent mouth lock onto the River Trent, through the flood lock and into Sawley. We were lucky with a mooring spot near the road and Alan and Carol arrived late afternoon. After a good old catch up we headed to the Harrington Arms for a meal.   . 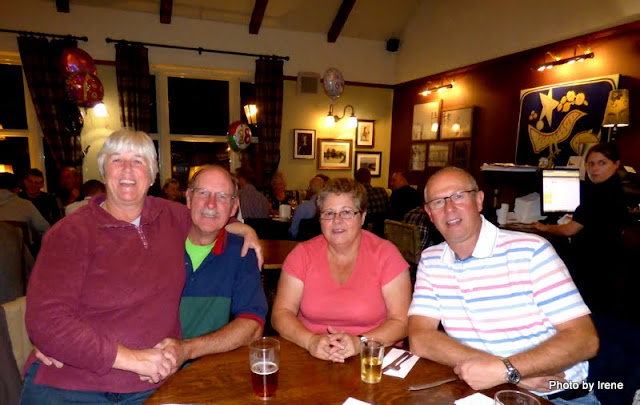 The meal was excellent as was the company and, apart from another small group, we were the last to leave the pub. Now...... I could tell you how I staggered back to FS but I don't want to give anyone the impression that I was a bit merry ( it was that large glass or three of red wine that did it) but needless to say, Ian became a good prop for me to hold onto. I still managed this photo of Sawley in the dark on our return and the photo wasn't to blurred so I couldn't have been that bad. 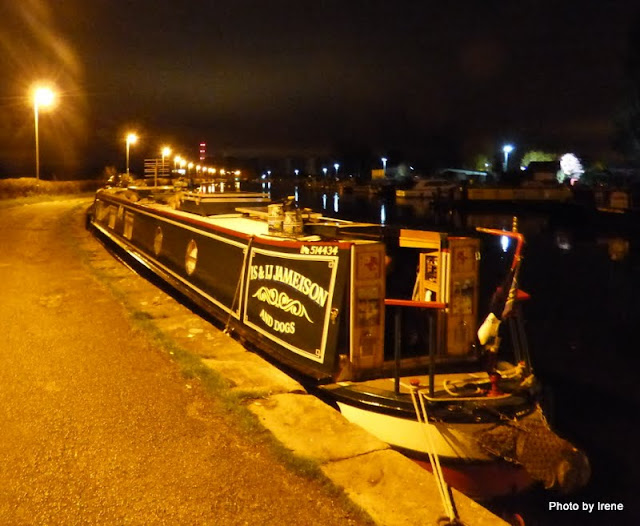 We left it a bit later to set off this morning and although very windy, the sky was blue with only a few clouds and it was lovely cruising weather. Got to Sawley lock and did an 'eeny meeny miny moe' to decided which lock to take. I chose the wrong one as the control box on the right lock wouldn't work. Ian reckoned there was an hydraulic failure somewhere along the line so I had to reverse back out it and took the left lock instead.

Once on the river it was only a matter of 10 minutes or so before we turned left onto the Erewash, our home canal. Always makes me depressed when we get here as the winter months seem so long. We do have more boating on the cards next week though, as we will be boat moving for Anglo Welsh next Wednesday. Taking our other boat Merlin from Bunbury to Great Hayward for winter maintenance and a repaint job then returning her back to Bunbury over the Christmas period. With stoppages starting on 2nd November it's going to be a rush job.

We stopped at Trent lock facilities and then made our way up Long Eaton lock. It was on the way to Dockholme lock that we encountered a Weeping Willow hazard. Why this has been allowed to grow and not be cut back is beyond me. It may be down to the owners of the property to do something about it, I don't really know but could this be a job for ECP&DA's work party bods with boat to come and trim the branches or could this be down to C&RT? 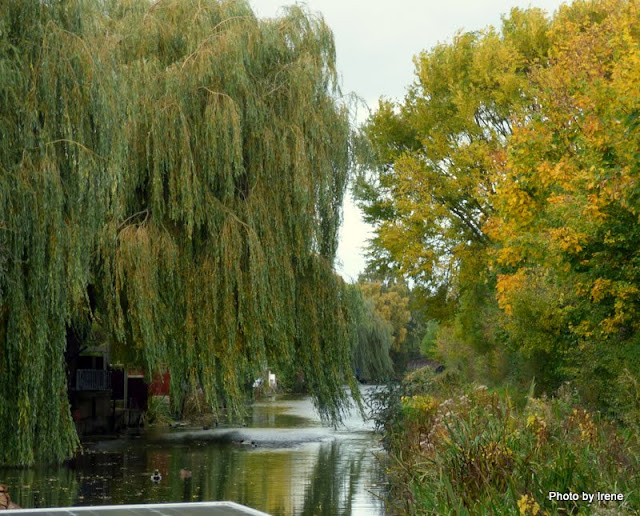 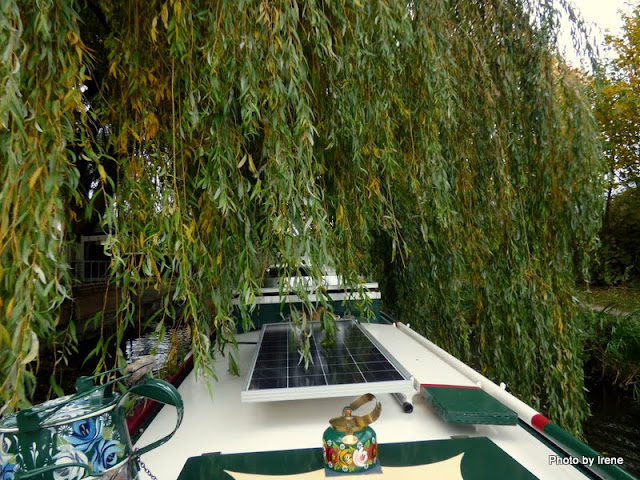 It was also on this stretch that a movement caught my eye from under a fishing peg platform. As I drew level a small head of a dog poked out. It looked most distressed so shoving FS into reverse I shouted for Ian to come and help (he was below). The dog then thought we were it's rescuers and started to swim towards us. I quickly knocked FS out of gear and the dog swam to the stern fender button frantically trying to get up. Ian made a grab for it's collar and missed, it's a wonder Ian didn't do a nose dive into the canal! Anyway, suddenly hurrying along the towpath comes this chap. frantically calling for his dog. The dog, instead of heading toward the man, turns and gets onto an offside garden. We were by now also drifting toward the garden and our immediate thought was to get the dog, push FS back across to the towpath and reunite it with it's owner. The dog thought otherwise and leapt off the garden just missing us, went under for a second or two (had horrible thought of it going under the hull) and then popped up swimming back to the towpath. Here the owner managed to oik it out by it's collar and after a good shake soaking everything including the owner, ran off along the towpath without a care in the world!  The owner then told us how the dog had run off chasing some ducks and not returned. The owner had legged it down the towpath and came across us in the dramatic rescue (his words) of his beloved dog. So it appears that the dog went a bit to far in his efforts to grab a duck, fell in and got under the fishing peg trying to get out of the water. All was well in the end thank goodness and I don't suppose the dog will stop its game of chasing ducks but I bet the owner will be a bit more vigilant in the future! 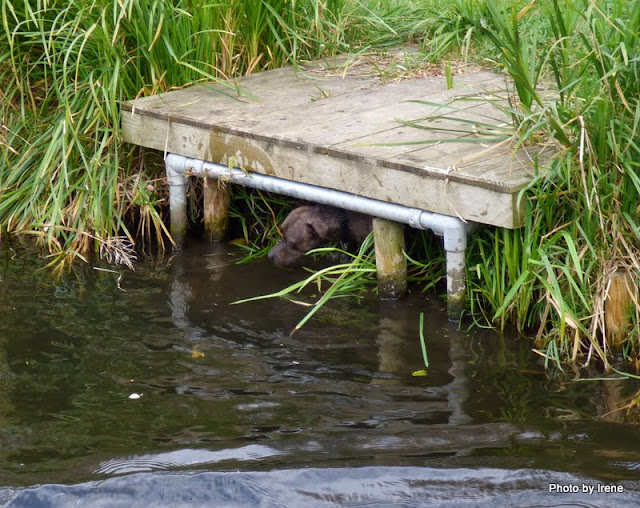 We are now moored back in Sandiacre on the only bit of the Derby Canal in water. Other boats from the society are joining us on Sunday and a mad exodus will ensue as we all make our way up together to the winter moorings in the Great Northern Basin.

And on route today, 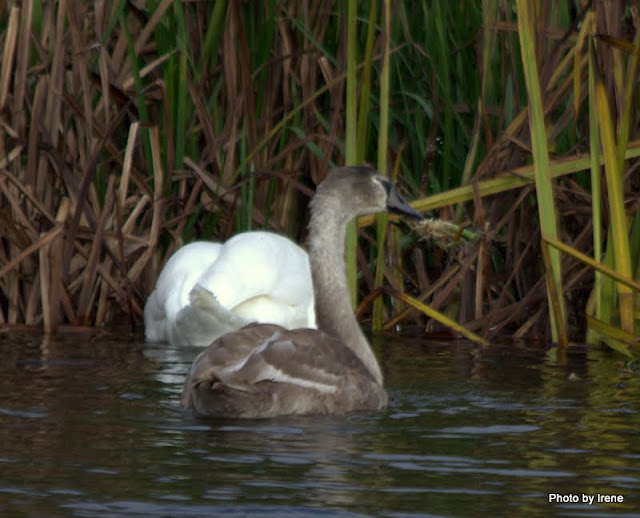 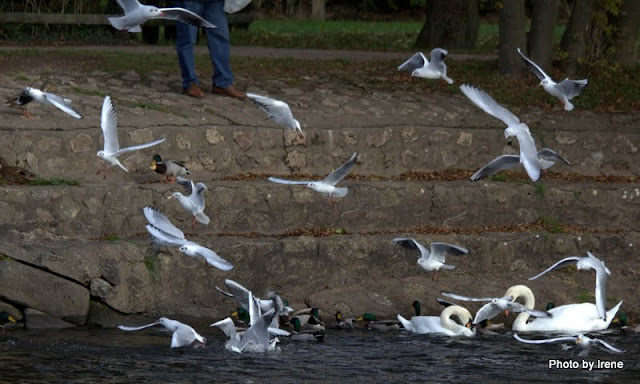 Posted by Ian and Irene Jameison at 5:34 pm

Hi Irene...
Reading this post (and having read your whole 'backstory' over the last weeks and months), I found myself wondering - Have you been tempted to adopt another dog? You two with Judy and Jade obviously enriched each others lives immensely.

Hello Martin,
Yes we will be getting another Labrador but not just yet. We have plans for next year that wold mean leaving the dog in kennels for a considerable length of time and I don't think that would be fair. So in 2017 we will be going round the rescue centers to try and home an older dog. Until then I get my dog fix by meeting boaters dogs. Thank you for your lovely comment. It is always appreciated. Xx