A crazy sort of day

So, what do you think of those DIY blood pressure machines? We had bought one at Lidl yesterday, saw them for sale and with that eye scare of mine, decided to fork out.  Ian tried it first, his pressure was a tad high, strange because he went to a well man clinic at the doctors before we left and the pressure reading then was normal! Mine though was through the roof!!! In fact, the reading was 140/91. Tried both arms and, funnily enough, had two different readings. The left was higher than the right. This has made me think about seeing a doctor on our return. Some lifestyle changes may also have to be thought about. No doubt, the doctor will tell me to lose weight and cut down on the booze. I'll leave it until then, me thinks. Just untying the ropes this morning when a lady popped her head out of the cratch cover from the boat behind and said she reads my blog. Quite an unexpected surprise and so very nice to meet a fellow blogger. The boat was nb Firecrest  I have put the web address on the blog list, right-hand side task bar. I never asked her name, most remiss, so it is a good job I found it on her blog. Lovely to meet you Cheryl and with us both heading for Lechlade, hopefully our paths will cross again.

It's been a day of challenges, mainly because of that strong Easterly wind, although I did wonder how many lift bridges we would have to raise. As it turned out only the one (Chisnell) as the numerous others (and there were a lot) had been left open.

Dropping down at Neil Bridge lock, the River Cherwell crosses the canal at Aynho Weir lock. The shape of this lock is pretty unique. It's an octagonal chamber designed in this shape to increase water volume because the drop from the upper canal to the lower canal wasn't sufficient to keep the water levels up with a conventional lock. 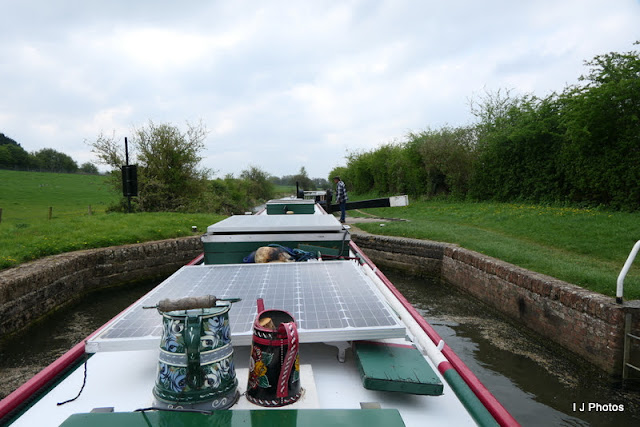 I mentioned Chisnell Lift Bridge. Ian set off with the windlass, just in case it had winding gear. It didn't, a chain hanging from one of the arms was the method of lifting. I watched as Ian heaved and pulled, but nothing happened. Then the penny clicked. A fixed chain towpath side needed unhooking. Amazingly, that did the trick! 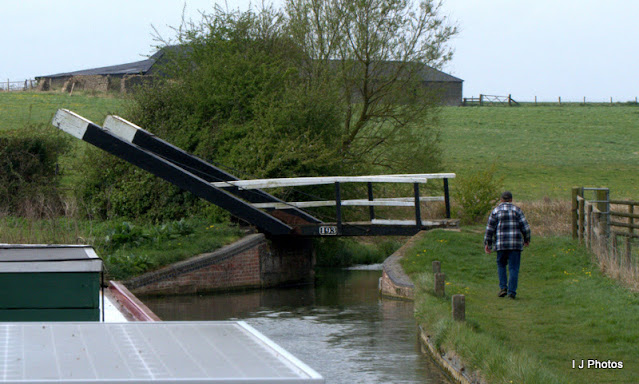 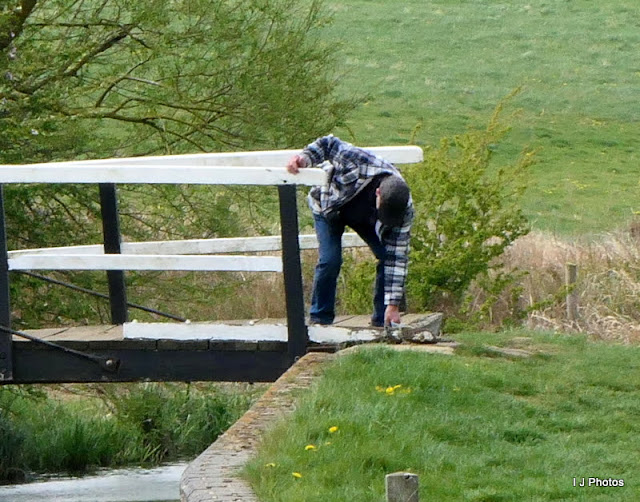 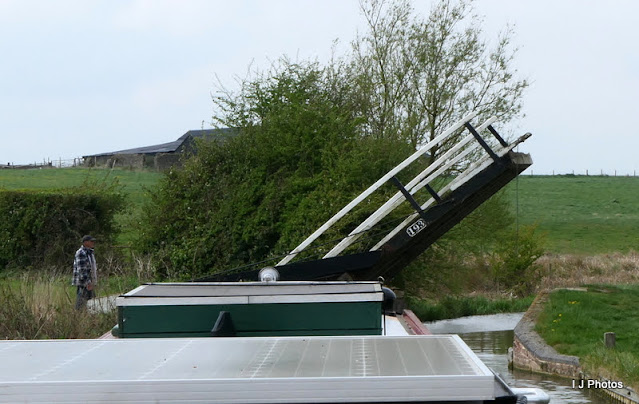 At Somerton Deep lock, I struggled to get FS off the landing. It was that blasted wind!!!  Pinned FS securely to the side. Took a humongous effort by that man of mine to push the bow off, and even then FS tried to enter the lock sideways! 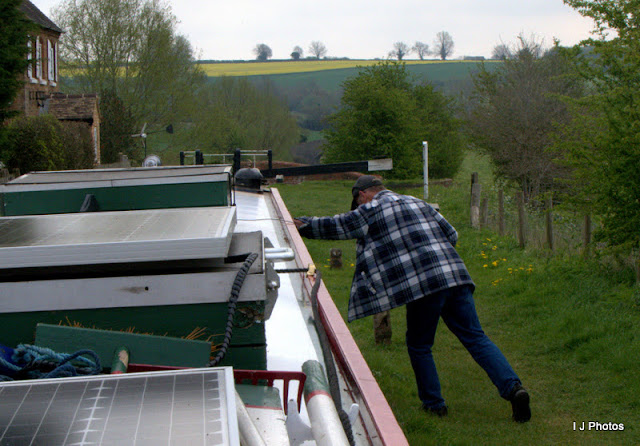 It's not called deep lock for nothing! 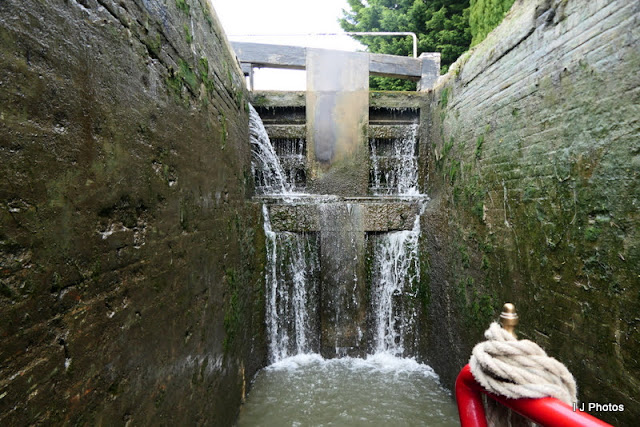 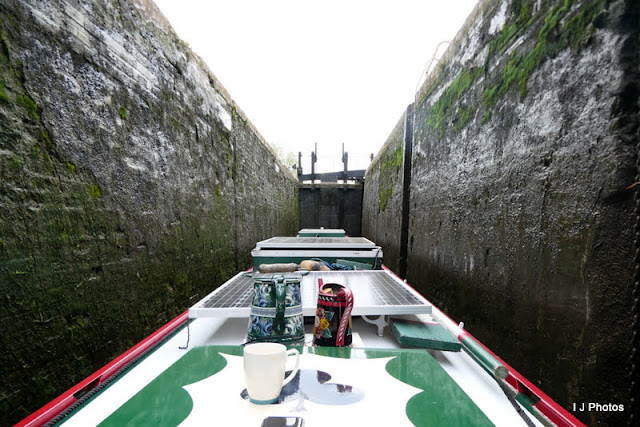 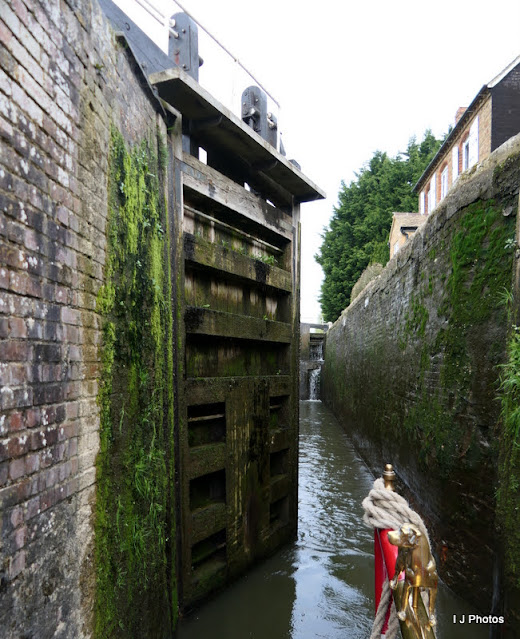 Oh dear, it looked as if an old barn wall had collapsed, blocking the towpath completely. 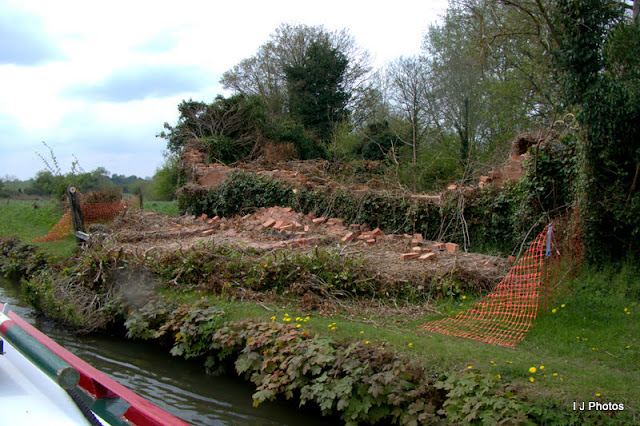 The Oxfordshire hire boats were on the move, It's changeover day and usually the new hirers leave base mid to late afternoon. It's not easy for first timers to get to grips with the steering at the best of times, but dealing with the windy conditions didn't help them one bit, and I thought we were in for a collision. We managed to miss each other, but at one point I thought the Oxfordshire hire company was set for another damaged boat. The lady steerer aimed straight for that tree, and it was only me bellowing for her to stop that disaster was averted. 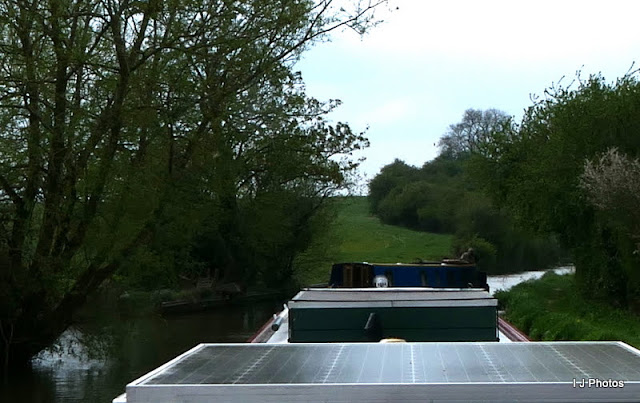 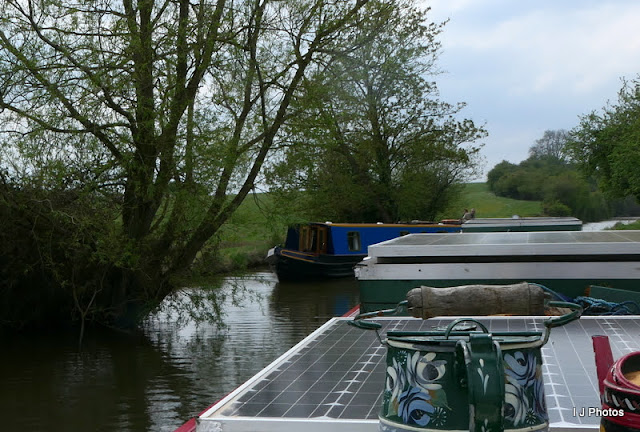 Gosh, we struggled with the wind again as we came to Heyford Common lock. Not a straight approach either, but a long sweeping curve to the lock landing. This in itself was a pain because the wind pushed FS straight onto the piling, annoying because the lock was bound to be with us, seeing as how we had passed that hire boat. It was, and it was always going to be because both top gate paddles had been left up! So then I had to get away from the side and this time the pole had to be used. Even with that, it was a struggle. To tell you the truth, by now I had enough of fighting the wind, so decided the first available mooring found was going to be ours. 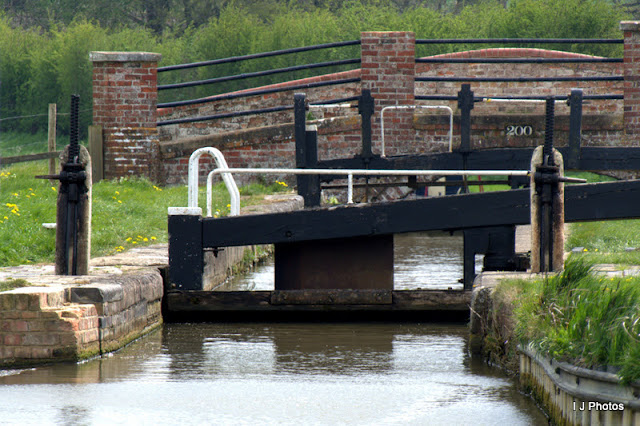 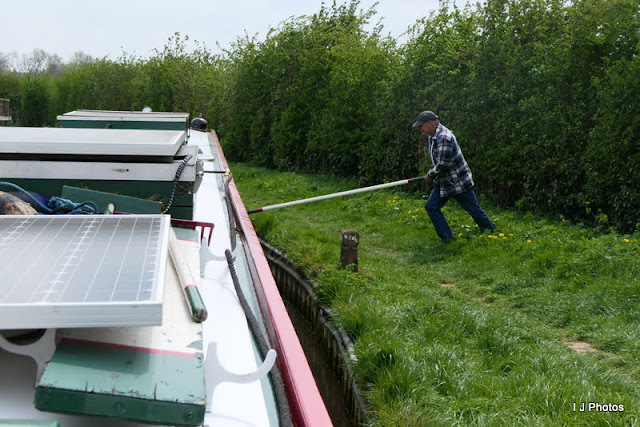 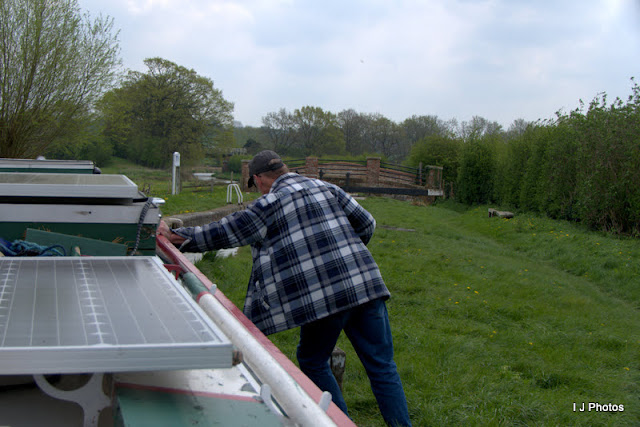 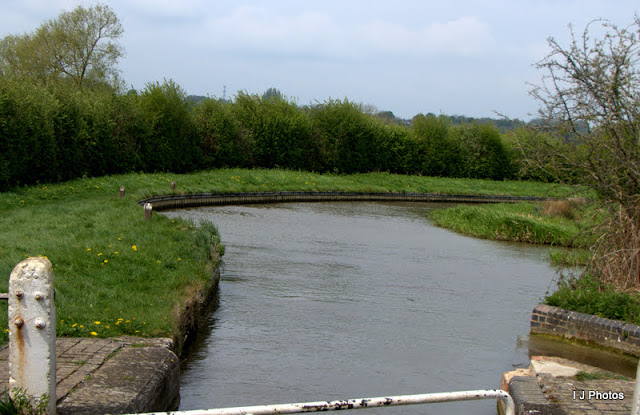 I thought we had struck lucky when a boat was seen coming toward us. Relief because it would mean Ian could get back on FS as we left, and I wouldn't get pinned against the side again. Slightly premature though! The oncoming boat got well a truly stuck on the mud! No way could I get past, so onto the landing I had to go after all. Then we watched a very impressive throw of the rope to her hubby, and a brilliant catch, he soon had her back on track. 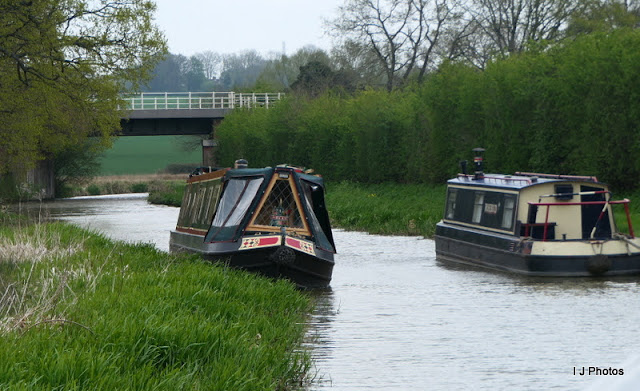 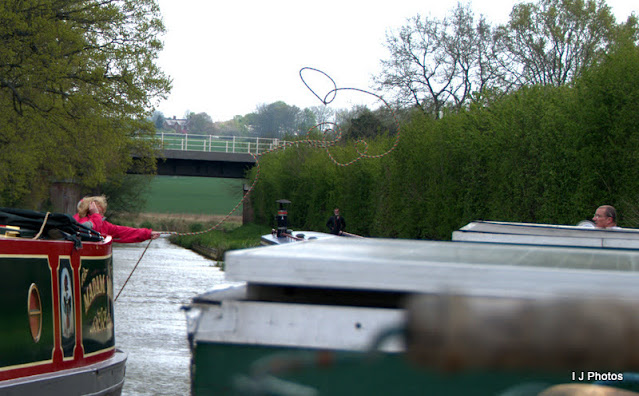 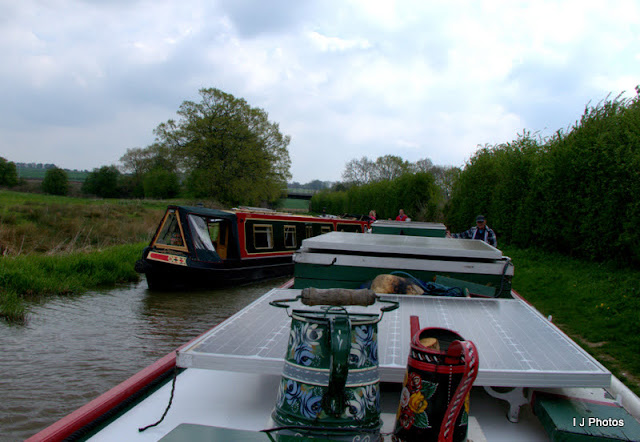 We found a mooring below the lock. Got ourselves nicely settled in when the realisation that we had no phone signal or internet! We were so close to the Barley Mow pub, you would have thought some sort of signal would be in the vicinity. Anyway, we moved again, this time to Heyford, and a signal, although weak, was had.

It was here that a lady came and waved to me through the window. Poking my head out of the cratch cover, she asked if I was the Free Spirit that a blogged. Her name was Sue and went on to say she had left a comment on my blog about the Frenchman and his cruiser incident 5 years ago. To cut a long story short, a chap got his cruiser stuck at All Oaks Wood, had to be towed out by a passing boater and then consequently hit a moored boat doing damage to the super structure. If you fancy finding out more, click HERE  Thank you, Sue, for stopping to say hello. It was lovely meeting you. 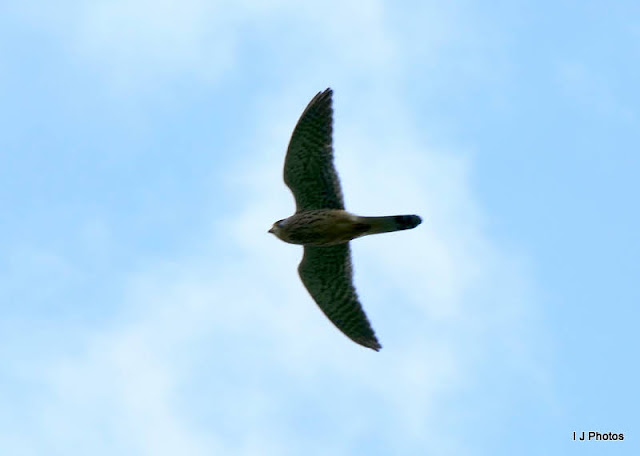 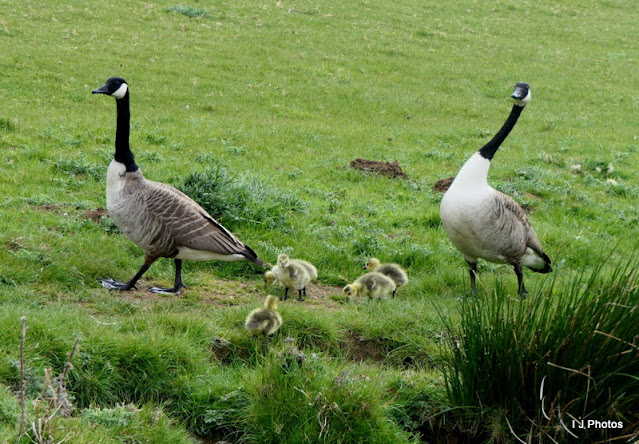 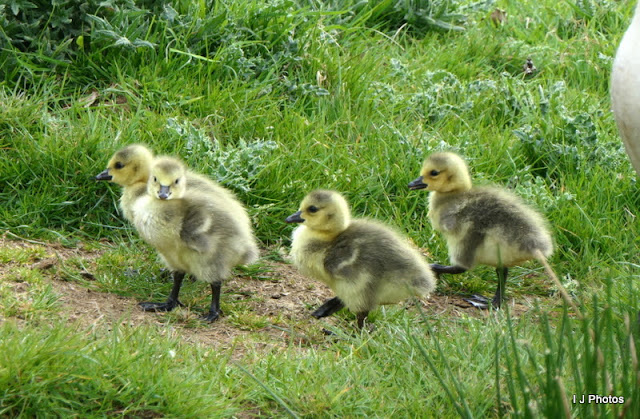 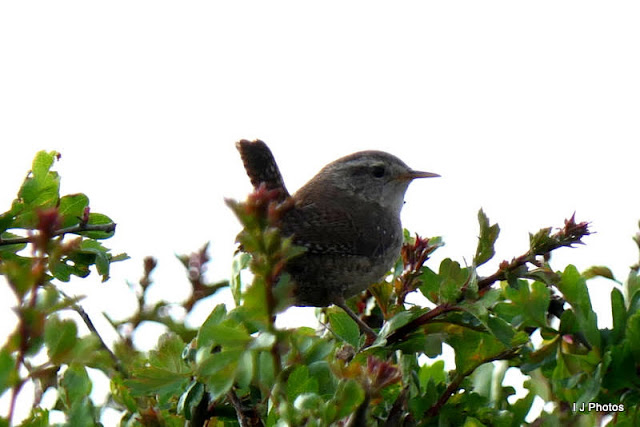 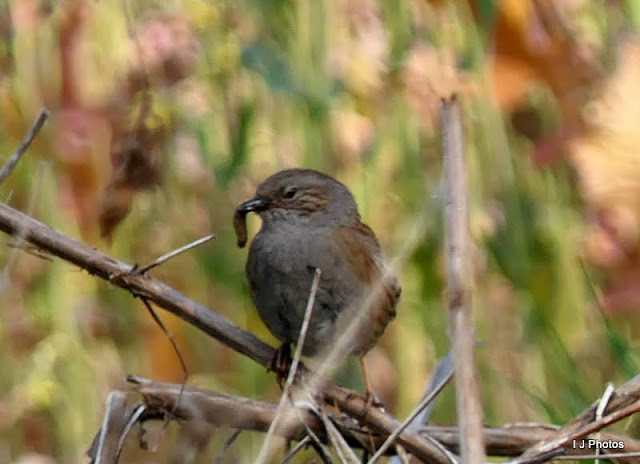 When checking your blood pressure always take 3 readings, and space them 5 minutes apart. Remain seated and don't do anything while waiting. I can guarantee the first will always be high, and the subsequent ones lower.

Lovely to meet you Irene and Ian, thanks for adding Firecrest to your blog roll, and we will look forward to meeting up again somewhere between here and Lechlade. I dont have comments enabled on our blog because it started off only as a way for our family to follow our adventures but it is lovely to share with a wider community. And we do read more than we let on. I need to ask my tech wizard back home which buttons need tweeking to make me more user friendly. Shouting at passing boaters that you enjoy their blog isn't really very 21st century.

Blood pressure readings vary enormously depending on little things like the mood you are in and how much exercise you have done in the last half hour. Even walking the length of the boat will give you different readings. Different readings between arms is normal too.

Remember the reading is only an estimate, even with a very expensive hospital machine, and with a cheaper home machine that can be quite a poor estimate.

If you take a reading which you think looks a little high and start worrying about it, then take another one immediately the second will be much higher as you are now worrying.

You need to take a reading at the same time every day using the same arm for at least 2 weeks when you have done no exercise. I do mine immediately after eating breakfast before I move anywhere and keep a record in a spreadsheet. Averaged over 14 days it doesn't vary much but the individual readings often vary by 15 either side of the average (that's a range of 30) and occasionally more.

Make sure you read the NHS guidance on blood pressure and don't do your own thing, or put too much emphasis on what I have just written.

Thanks, Dave and Paul. Good advice and one we will follow.

Hello again Cheryl, I also started the blog to keep the family updated, they soon lost interest and probably thought good riddance. Anyway, I may be able to help you with enabling comments. Go to your Settings and scroll down to the comment section. You have a choice on who is allowed to comment. Scroll down further and a Captcha button can be switched on. This is a good idea to stop any span. Hope this helps.

Hopefully, we will see you soon.

I enjoyed meeting you, Irene. Just read your account of the Thames, it sounds as if the water situation is even worse than last year. On our first day we spent 3 hours at the Hurley water point - the hire boat ahead of us took an hour to fill! After that we always got to a water point very early. Best wishes for the journey back, Sue.