And so to Scotland

Away with the Beast today....thank goodness it wasn't yesterday cos it didn't 'arf rain! All-day them cats and dogs fell from the sky and the Friday work party turned out to be a very damp affair. So most relieved to see the old current bun beaming down on us this morning.

We are not alone for this holiday. Last weekend at our daughter Christine and son-in-law Kevins 40th birthday party it was suggested that maybe Kevs parents would like to join us.


Big Kev and Gunda have one of those super-duper motorhomes, all singing, all dancing 6 berth with one of those beds that descend from the ceiling with a push of a button. Posh or what!!! Slightly longer than the Beast and very nicely put together. Anyway, it was a great suggestion so today we left roughly at the same time, them leaving from Nuneaton and us from Langley. They took the route that went through Leeds, we took the M1 and then the A1(M). Bearing in mind they must be a good 25 miles further South then us we fully expected to arrive at the designated meeting place of Scotch Corner well before them. But we had hold up after hold up so actually arrived after them. Kettle was on though so there was something to be said for arriving later!


The plan was to make for Edinburgh finding a stopover near to the city for the night but you know what it's like when one is nattering and enjoying the company, we didn't leave Scotch Corner till well after 2pm. With a further 155 miles to do a quick change of plan was agreed by us all and we found a place to park the motorhomes by a Farm shop just before Berwick on Tweed. 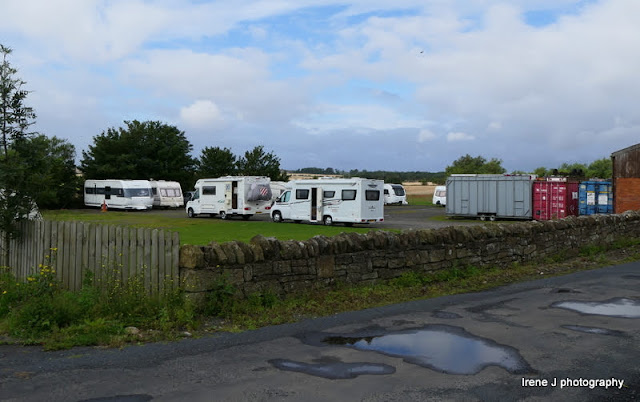 Tomorrow the adventure begins but as yet nothing has been planned other than a trip on the Falkirk Wheel next week.


Posted by Ian and Irene Jameison at 7:39 pm