I was right in my post on Thursday when I said I wasn't sure what I was going to do Friday. It was a kinda boring day. Ian was out all day doing work party stuff which left me twiddling my thumbs. I did give the Facility block a good clean. This is part of an agreement between ECP&DA and C&RT. They give the society money to buy cleaning materials and loo rolls and a little extra to look after the block. When I'm back over the winter months I offer to do the cleaning as it gives me something to do.   It only took me a little over 30 minutes to do the job which left the rest of the day to wonder what I was going to do. In the end I spent nearly all day sorting out photos. When Ian did arrive back late afternoon he managed to get the pipework finished off. Water went off for a while and we were both very surprised and relieved that no leaks appeared when it went back on. 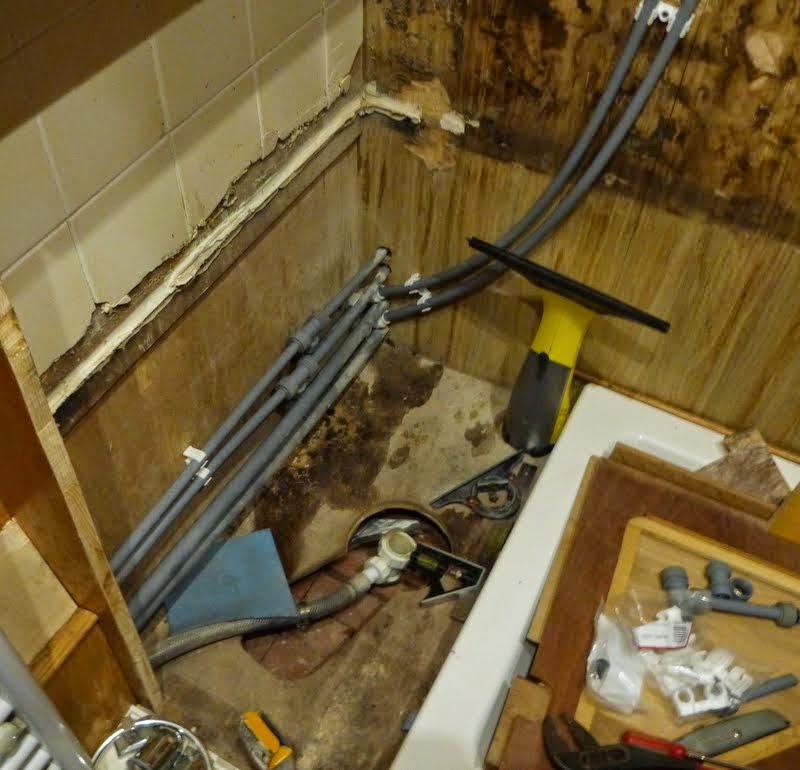 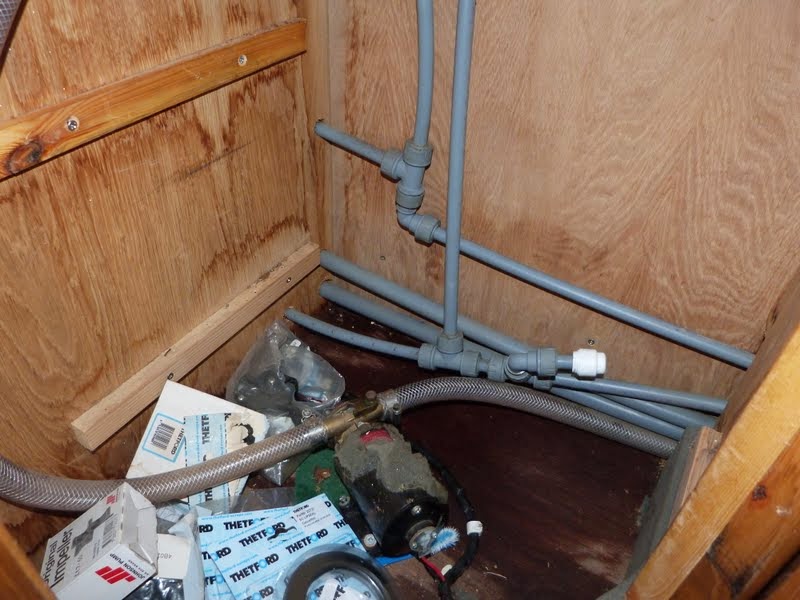 So today we nipped out first to Sandiacre to fetch other bits and pieces needed from the garage and then over to Ilkeston to get some ply to make the shelves. First though we had to negotiate the frozen back deck. -2 showed on our thermometer....... brrrrr it was blooming cold!

and ice had formed in the basin 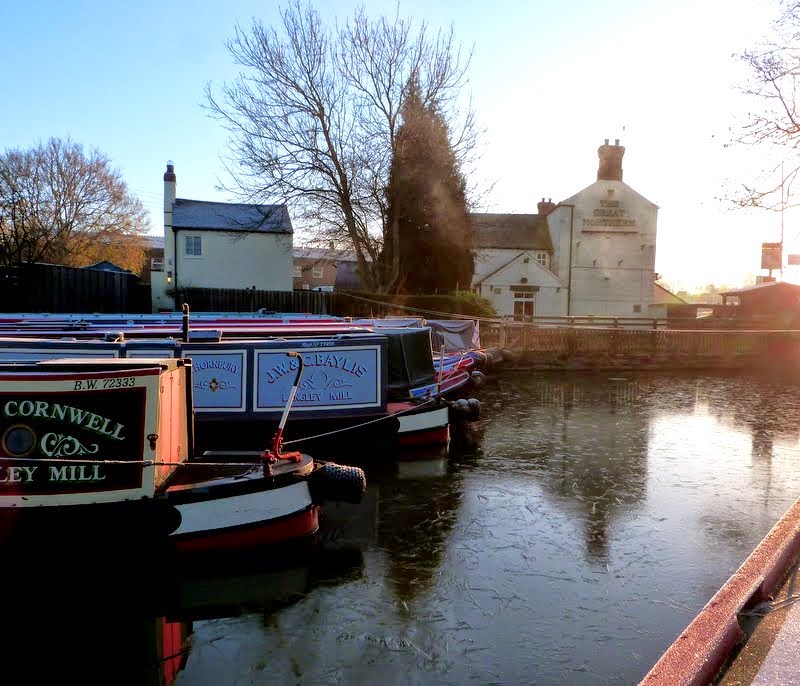 The back deck was lethal and having to step off and onto the pontoon made it even more treacherous. In my ignorance I sort of implied that we needed some salt to sprinkle over it. Ian nearly had an apoplectic fit!!!!. Salt on steel???? 'Over my dead body' said he. 'Don't you know what that could do to the hull'??? Well obviously I didn't otherwise I wouldn't have mentioned it. I know now. Something to do with corroding the steel. I wont be making a mistake in mentioning that again. Anyway we put a mat down which helped but I'm not looking forward to when it stays icy all day. At least by the time we returned from Ilkeston the deck had thawed. So if anyone knows of a product that we could put down, and one that Ian would approve off, it might just save me from taking a dive.

Bit of a Robin theme going on this morning. Saw this Robin taking a drink from the only bit of unfrozen water by the swing bridge. 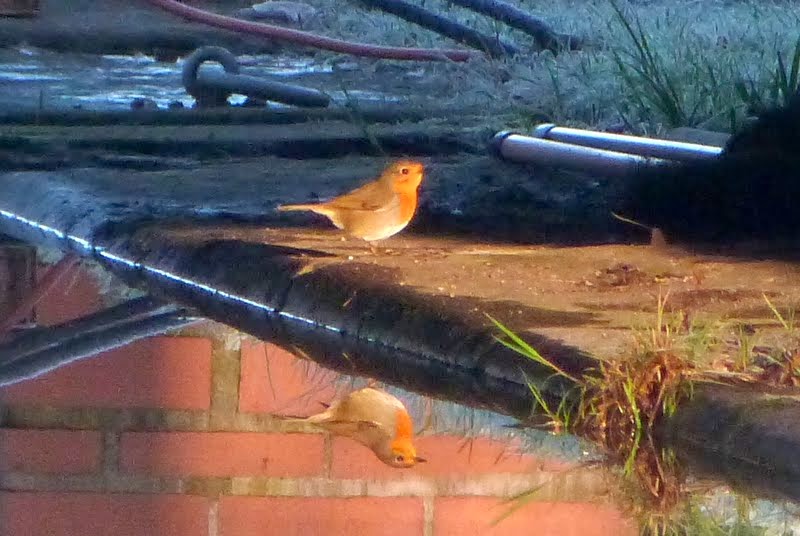 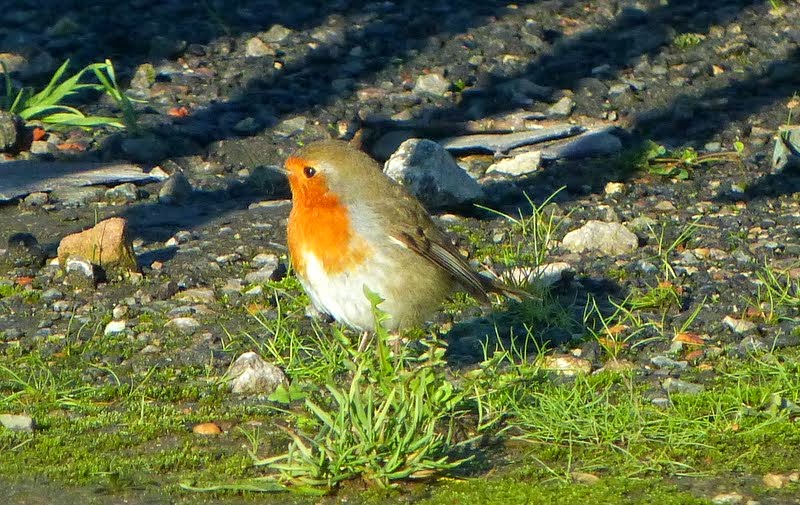 Ian is now back in the workshop cutting the shelves and making the frame to hold the shower wall and door. So far we have had 5 days of not being able to shower. Wash downs are all well and good but I cant wait for it to be finished so I can have a good all over scrub.

Posted by Ian and Irene Jameison at 3:46 pm

Irene, run this one by Ian and see if he approves...
http://www.peacocksalt.com/view-product/non-cor-liquid-deicer-20l-4-x-5l
If you find three other boaters interested it would make the cost more acceptable...

Google non corrosive de icer this is just one but you have to consider environmental as well
http://www.fuze-products.co.uk/icego-liquid-25-litres.html