Very smelly body in a bag

First apologies if you are eating your dinner. Maybe leave reading this till later! Anyway....Yep I found one! The smell alerted it to me first. It was not a smell one ever forgets if you have ever had to deal with dead bodies and with me being a veterinary nurse back in the late 60's early 70's it is the one stench that immediately takes me back to those post mortem days! Anyway I happened to walk through bridge 88 and noticed all the boats had gone. 5 had been moored along that stretch yesterday. One boat was still present but had pulled back a considerable way.


I then noticed a black bin liner with what appeared to be an animal outline. By now the stink was unbearable so that explained why all the boats had gone. Unsure as to why someone would have left it on the towpath, I thought maybe it could have been a boater having lost there beloved pet and then couldn't be bothered to dispose of it properly. Digging a hole would have been better then leaving it on the side. I mean why else would it be put on the towpath near the hedge and bagged to boot! On getting back to FS I went on line to find the number of the environment agency for this area. Reporting my find the person on the other end of the phone said this must be classed as an emergency and when the person dealing with animal road kills arrived he would phone me for further details.   An hour later I gets the phone call. After directing him to the spot he was left to carry the bag back to his van. I dont envy him in an enclosed space with that pong. Hope he keeps all the windows open 'cause even double bagging wouldn't get rid of the stench. Now I don't know if this was reported to the police but a couple of hours later 2 Police women turn up. This could be totally unrelated to the event, and they didn't come to the boat to see me, but it did make me wonder as no sign of any Police had been seen since we arrived.
. 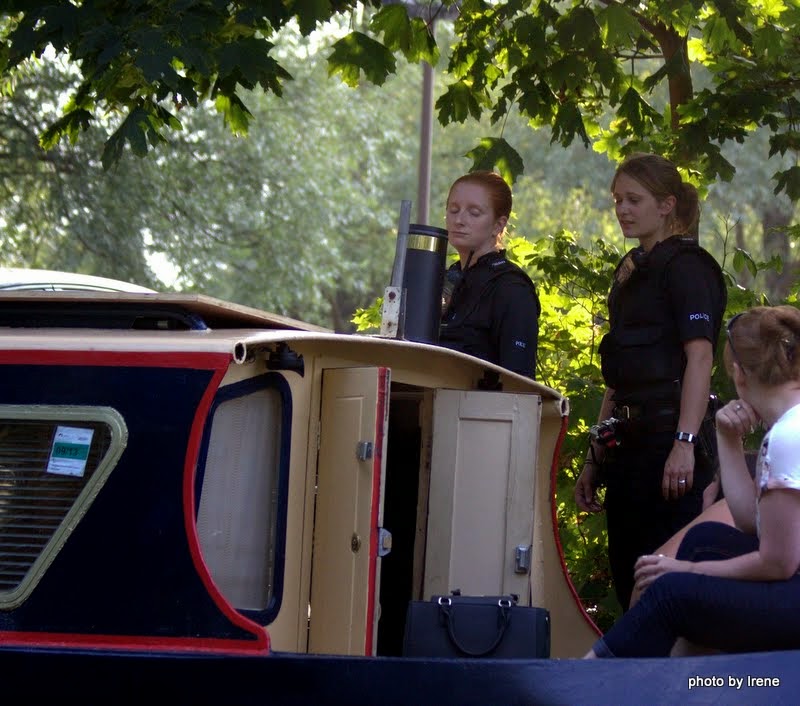 As far as I was concerned that was the end of it but taking Jade out at 5pm I got chatting to the lady on the boat behind us. Apparently this black bag had been lying there for over a week and two days ago the smell started.  She also assumed it was a dead animal but never gave it a thought about reporting it. Even she had no idea who had placed it there. So the mystery remains.

I had to show you these next few photos as this was not only highly amusing to watch, but also one of those cringe moments with all those gongoozlers watching your every move. I did feel so sorry for her and to top it all her little dog was determined not to stay on the boat even though she kept running after it, picking it up and putting it back on board.! 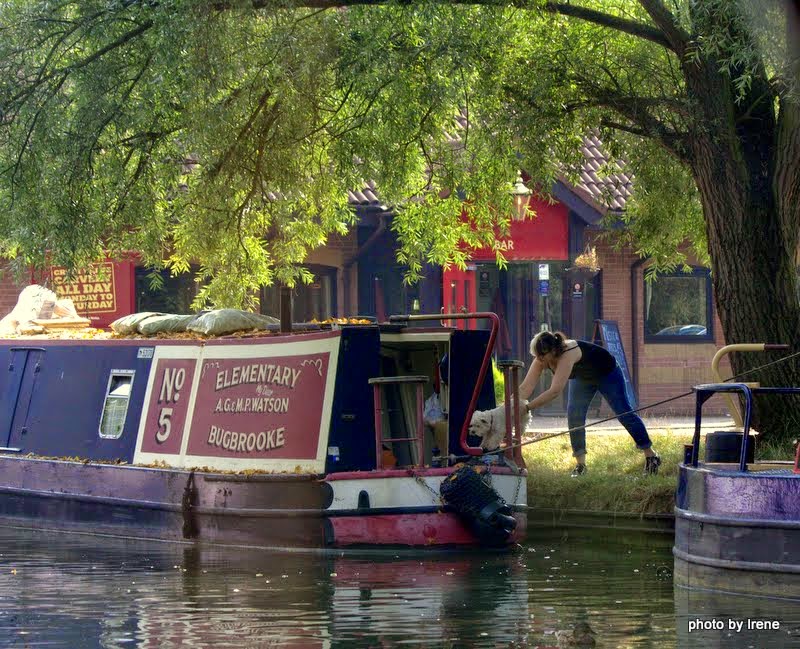 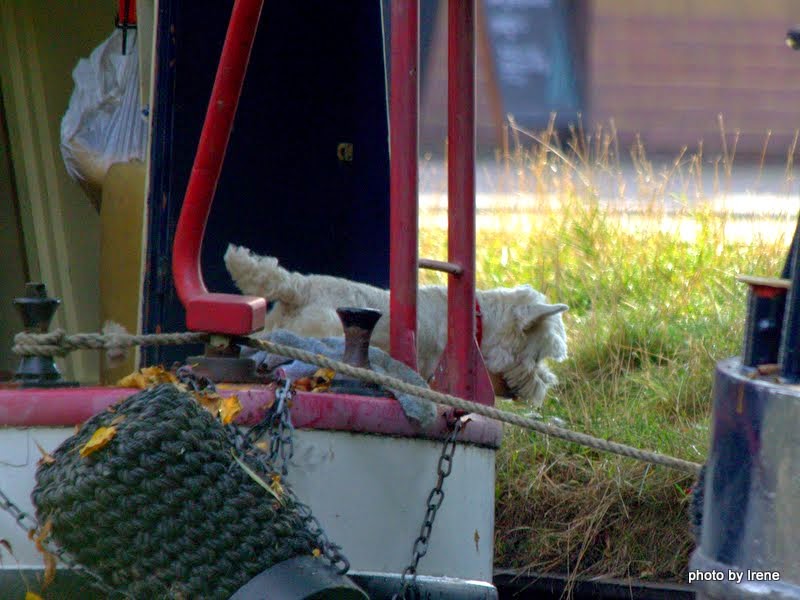 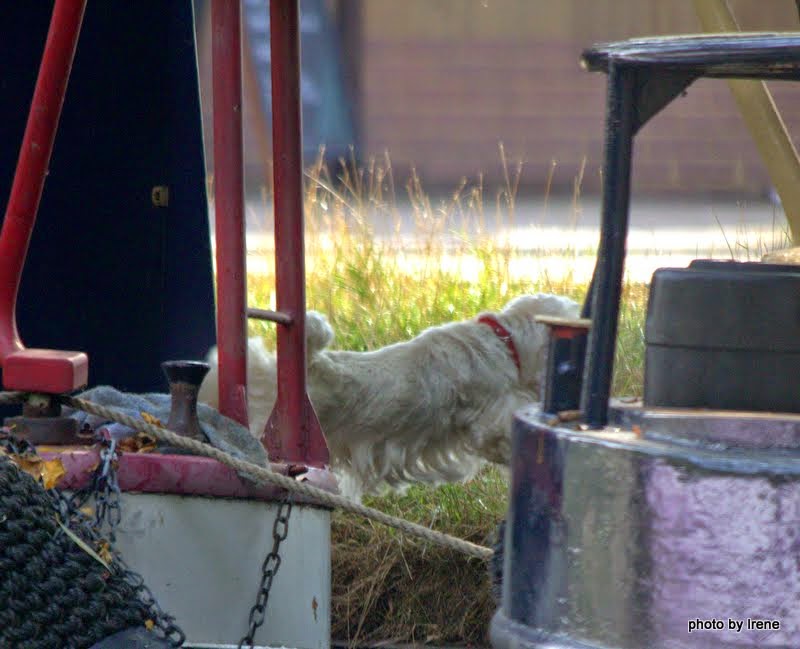 And the view of the Pear Tree pub at night. 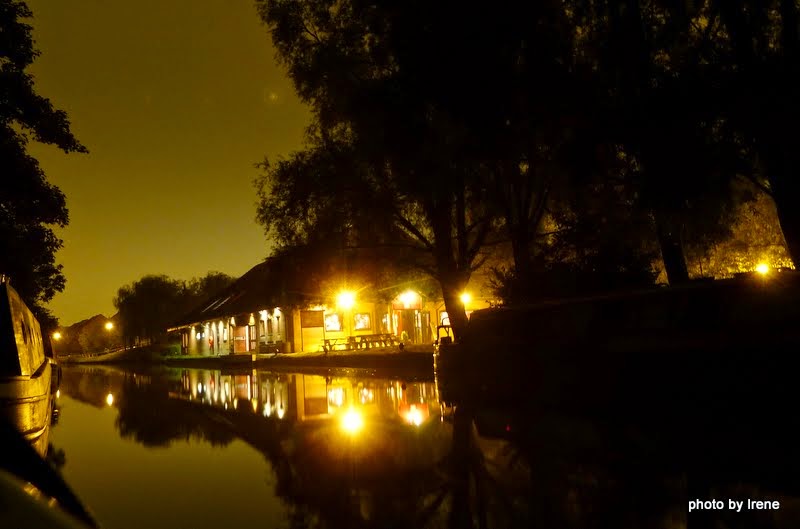 Posted by Ian and Irene Jameison at 6:54 pm