Opps first I must correct my mistake on the last post. It wasn't Holland playing Germany in the world cup, it was Holland playing Argentina. I think by now you have realised I am not a footy fan, not having watched a single match!

I failed to mention yesterday that ECP&DA came to the rescue of a loose boat. On leaving the rally a walker told us of a boat across the canal. Turns out one of its front pins had been pulled by the trip boat and had disappeared in the depths below. So ECP&DA bods, armed with lump hammer, took a walk along the towpath to where it had drifted. First on board was Gillian( Dennis and Margaret s daughter) who managed to grab the center rope, pass it to Dave and John, who then pulled it back to the side. Another good result by the team! 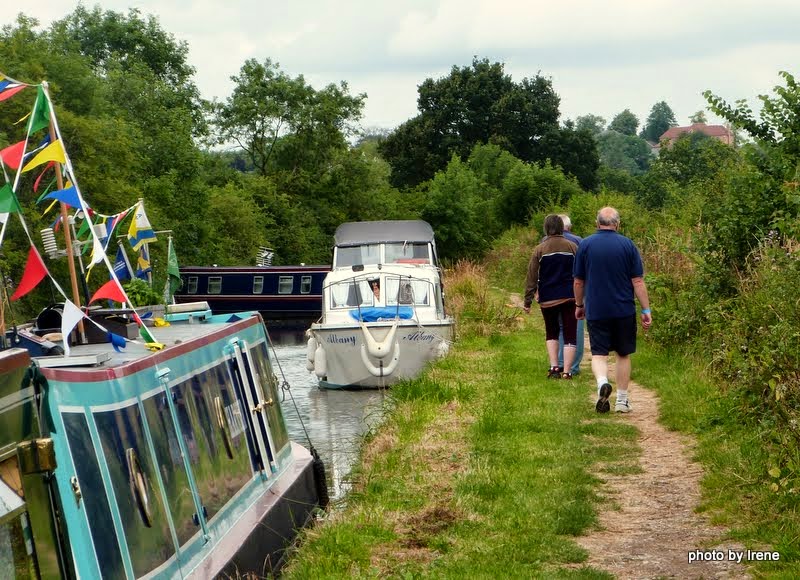 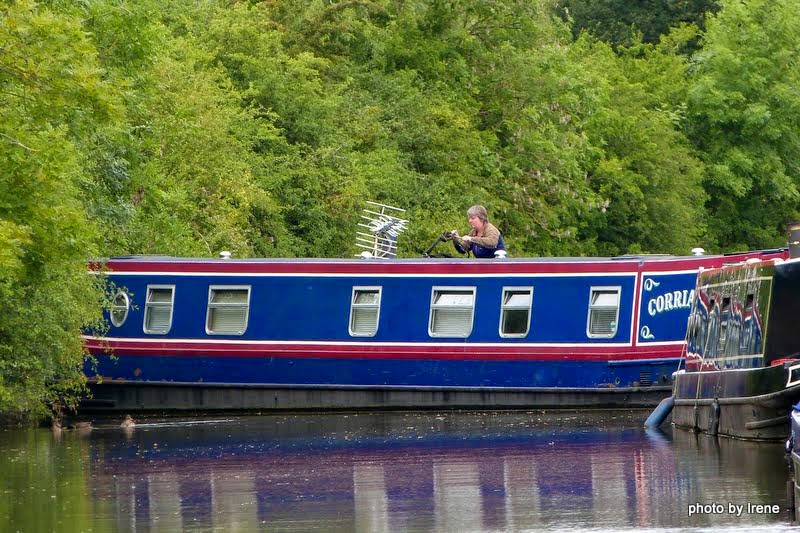 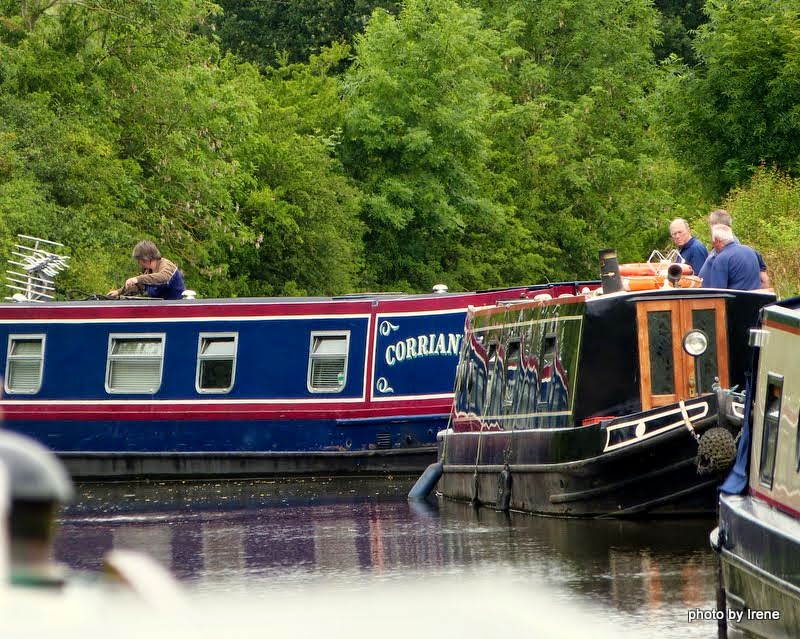 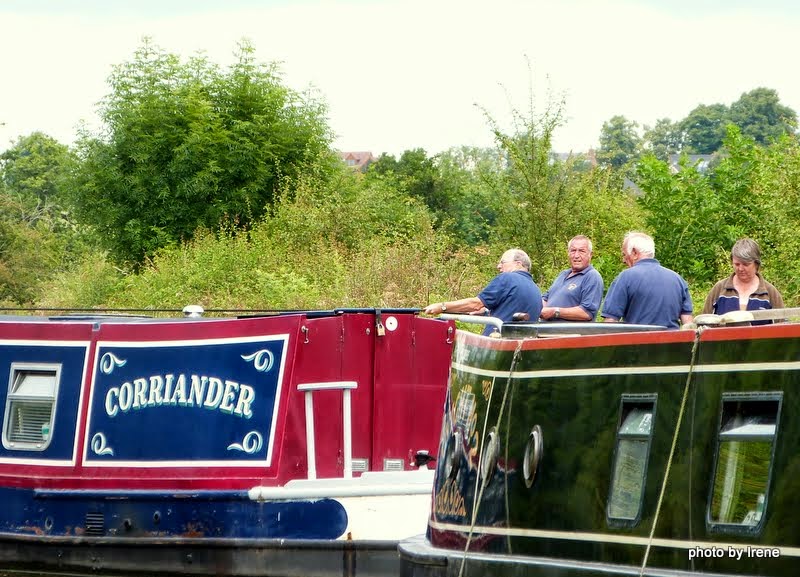 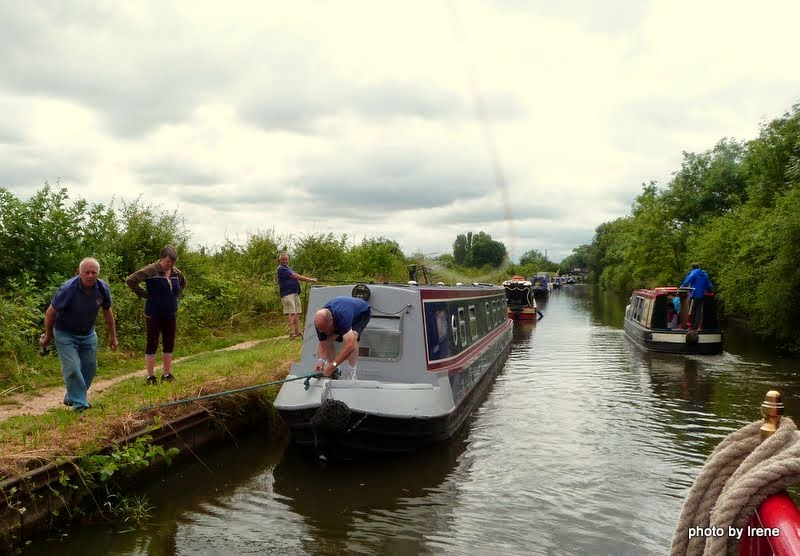 Having left this morning early with the knowledge that Camp Hill and Garrison locks had to be tackled, we made our way back along the 7 mile or so of the Grand Union. This is an abysmal part of the stretch. We were for ever rolling over debris and scraping FS's bottom and after one bridge a sorry sight of a burnt out narrow boat. Torched, so we have been told by youths! A little further on we saw a welcome sight, a dredger coming toward us. Well we thought it to be  welcome until we had to move over towpath side and nearly ended high and dry! Ian shouted out that this section could do with dredging but the reply came back that it wasn't on their work sheet! 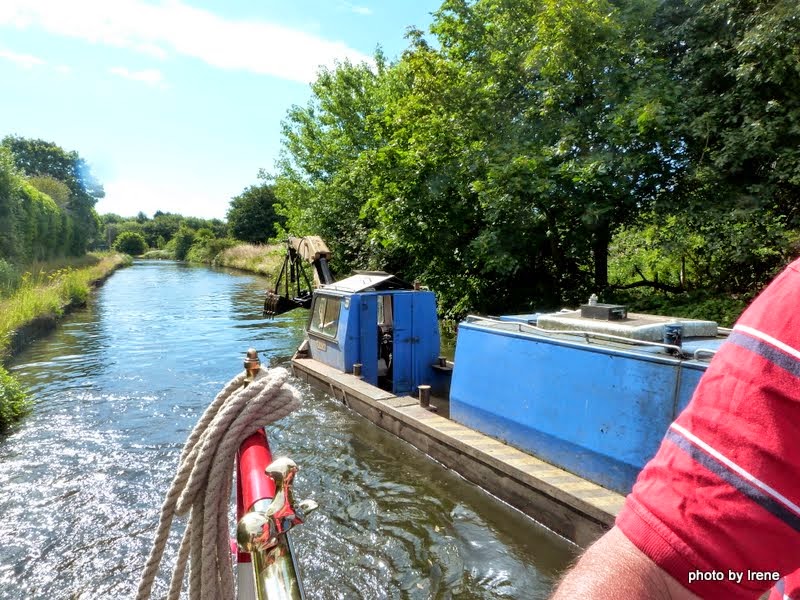 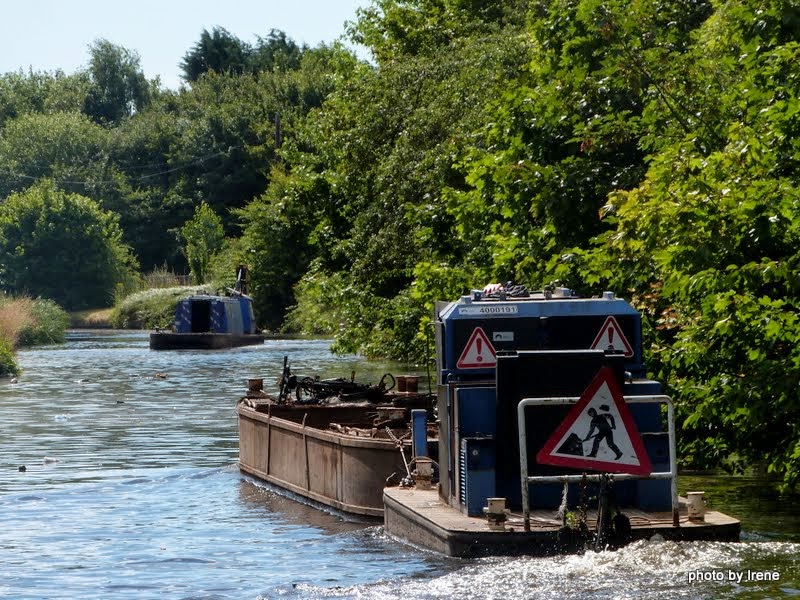 At Camphill Locks by bridge 105 we encountared a bit of a hold up. C&RT were in attendance. Turns out the local youths thought it highly amusing to remove the cotter pin from the gate collar which made the gate very unstable. After a wait of nearly 3/4 hour C&RT helped us through. Coming into this lock I had to plough my way through the bushes. Asking a C&RT bod what was being done about the appalling state of the offside growth, he said we should all complain and while we are at it, the state of the towpaths. He blames the contractors for not doing their job properly! 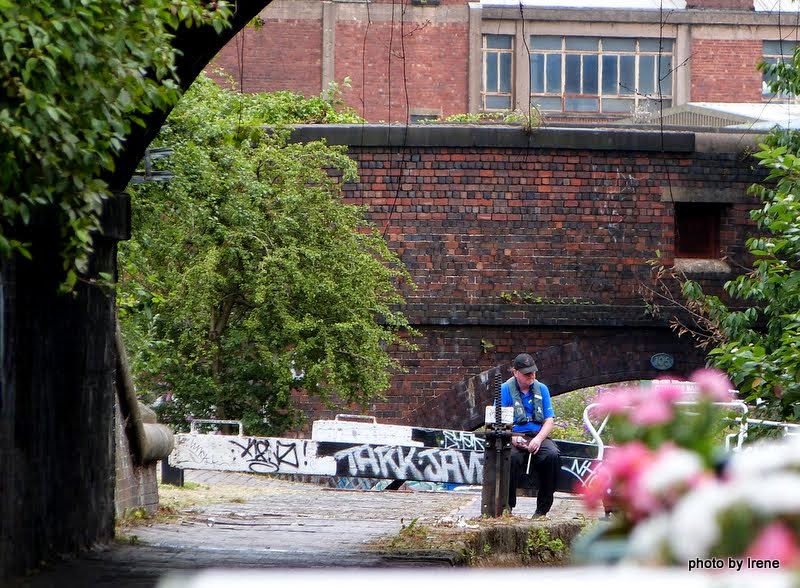 It's funny that at the next lock, sure enough, the grass cutting crew were present. Ian then had a word with them about the towpaths and guess what they said. They blamed it on C&RT for only allowing them to mow 6 times in the year instead of the 9 that has always been the norm. Makes one wonder who is right and who is wrong! 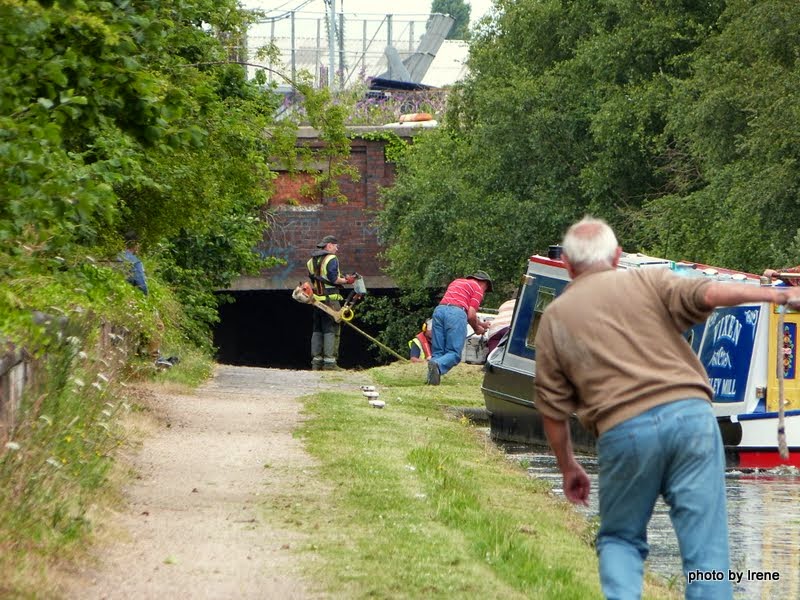 This was our last lock on the Garrison flight. So much water coming in from the cill that I was beginning to get quite panicky. So much water was coming in that it kept pushing me against the bottom gates. What if the gate gave way. I wouldnt stand a hope in hell of coming out unscathed. Another email and photo to send to C&RT. 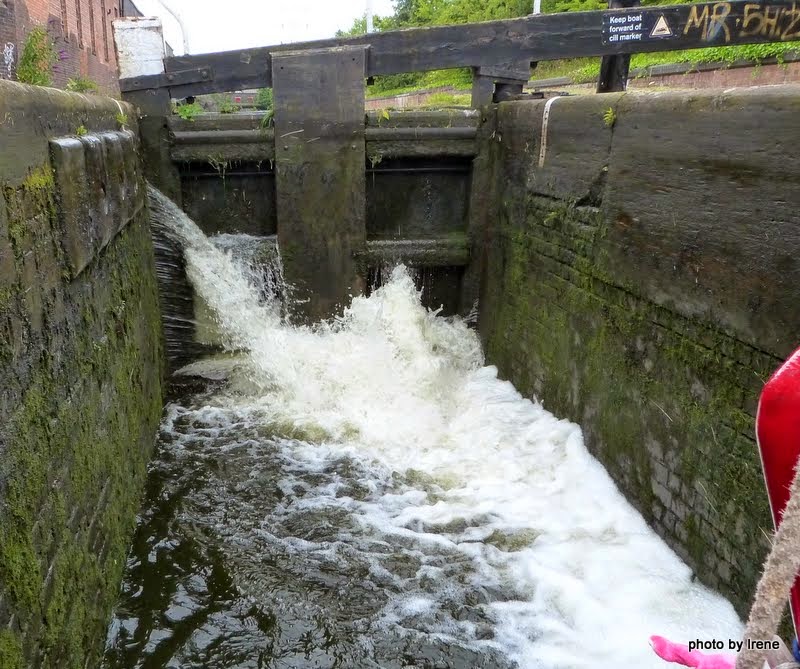 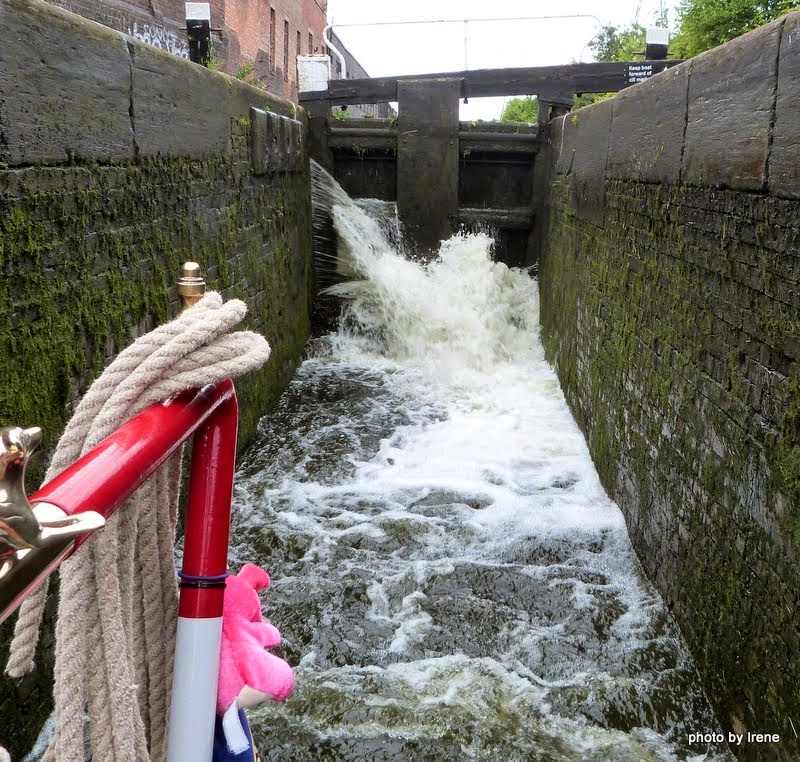 It wasnt long before one of our mob got the prop fouled. Happen to be Dave on Vixen. We all came to his assistance although, by the time we arrived, he had all but removed the culprits. 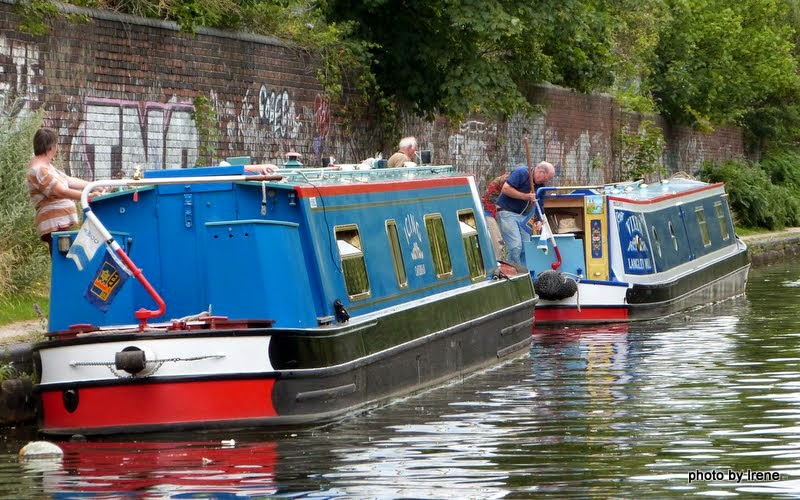 Finally by about 2.30pm we made it to Salford Junction. Sharp right turn and once again on the Birmingham and Fazely. Destination tonight Minworth and a possible pint in The Boat. 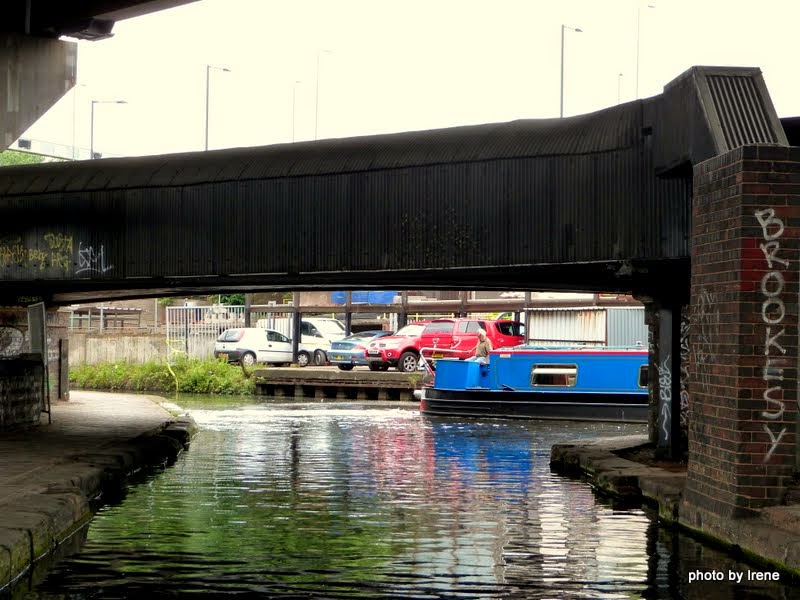 Posted by Ian and Irene Jameison at 6:48 pm