Goodness it was hot yesterday. The boat was like an oven and Jade really suffered from the heat. Her winter coat is only just starting to come out so I'm brushing her every day now to help remove it. I reckon I could knit a jumper by what comes out! For the first time in ages I didn't bother with TV. Nothing caught my fancy and it was to hot to sit in the boat so I fished instead.

With the night drawing in, it cooled down sufficiently for us to go back inside and have a night cap before bed, and as our side hatch is now water side, we left it open. A net over the top to stop the mosquitoes and sleep was so much easier. Why we didn't do it earlier is beyond me.


So first thing this morning, after Jade had been walked, we left her in FS to head for Bosley Cloud. The morning was starting to warm up and the thought of the climb to the top was a bit daunting.
Most of the climb was done on lanes but, on getting closer, I happened to spy a sign with National Trust on it pointing toward the top. So feeling adventurous we took that path.

This path turned out to be more adventurous then anticipated. The next photo shows a path leading up through the fern. And boy did we have to fight with it. We couldnt see where to put our feet and the bracken got thicker and thicker. I started worrying about the nasty tick that carries the Lyme disease as we ploughed our way through it. 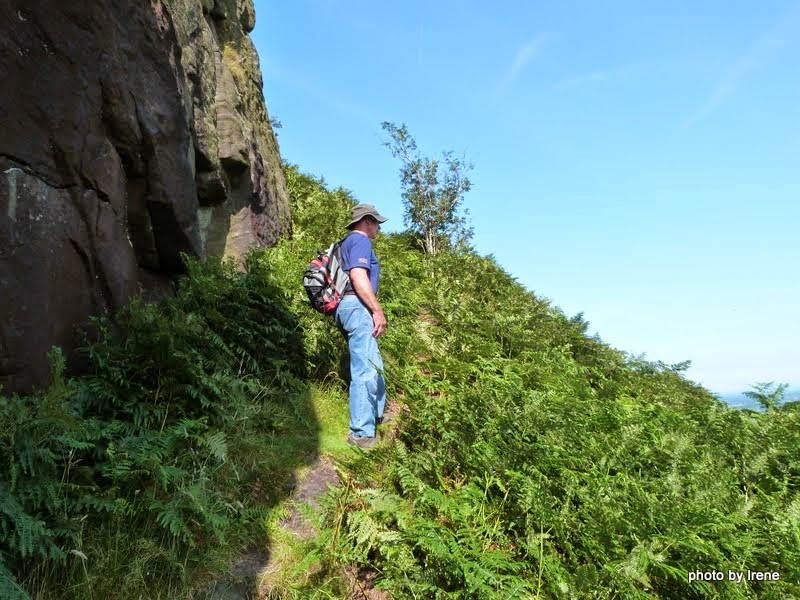 Then the path seemed to stop. To our left side was a rocky outcrop and Ian decided to have a climb to see if that was the way to go.  It certainly was and I then had to try and climb over huge boulders set at impossible angles to get to the top. I very nearly gave up but the thought of trekking down the same route made me more determined to proceed. Thank goodness Ian's steadying hand was on hand!


But we made it and what an achievement. We had an almost 180deg panoramic view from the top  and with the perfect weather conditions could see almost to Wales.


On the way back we took the path that lead straight to the lane. It was so much easier but not half as much fun! We took a short cut across a field of sheep and then discovered it was the wrong short cut!

Walking further down the lane we came across this bull and his girls. They were being herded back to their field after escaping. Blooming glad we didnt meet the bull head on! 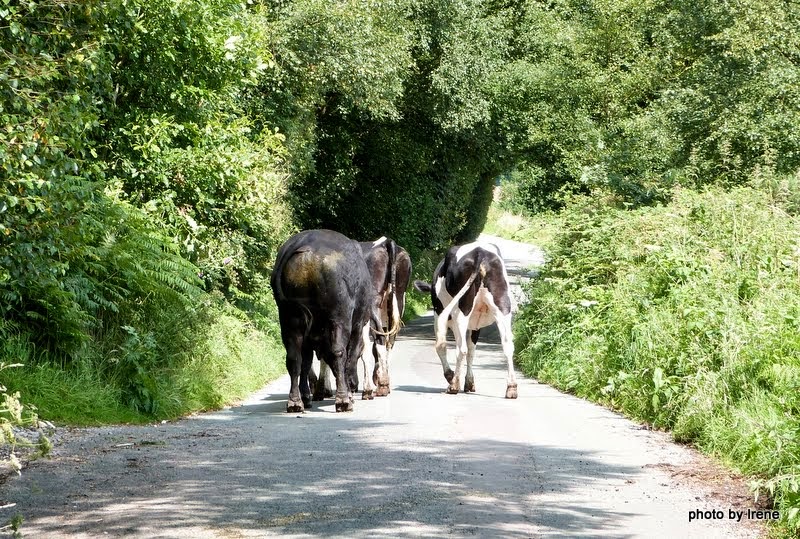 We eventually found the short cut and, on looking back, saw the huge boulder which so nearly scuppered my chance of reaching the top. Again I have cropped the photo.

After three hours we arrived back at the boat. Jade was so glad to see us and as a treat we gave her a lovely refreshing cool wash in the shower. More hair came out covering the bath and pumping the water out was quite challenging. Ian was on his knees with hands over the plug hole trying to catch the hair as it sped toward the drain. So far this afternoon, her panting has stopped and she seems so much moreat ease with herself. Cant have been pleasant carrying all that extra hair around.

We leave tomorrow for Maccelsfield and hope to find a mooring. Loads of boats have passed us today so I'm keeping fingers crossed a space will be available.
Posted by Ian and Irene Jameison at 7:58 pm

We did that walk a few years ago with our old dog Tess before she got too old! We found a good way up and came back through a farmyard where the farrier was shoeing a pony - Tess was delighted to get the hoof trimmings as we passed.
Debby