Having spent a night listening to the trains at Marsden ( we were moored right next to the station) but still managing to get a few hours shuteye, we moved off after 9am to tackle the 22 locks to Slaithwaite.


Now the locals pronounce it Sloughwit and woe betide if you say it any other way 'cause you will be frowned at and told proper like. Anyway expecting low water levels this side of the tunnel, as warned by other boaters, we were pleasantly surprised that only the pound by lock 37 was low. 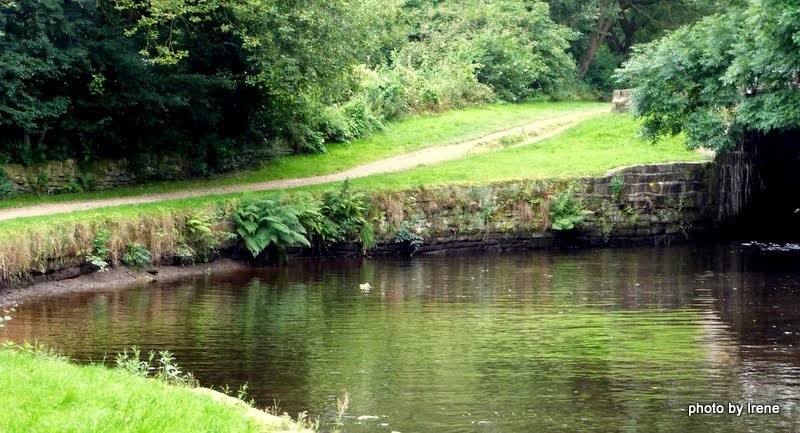 What did surprise us was the state of the lock walls! It is pretty obvious that most of the locks from 37 to 31 leak like a sieve. The weed has managed to take root and now the walls look like bushy gardens. 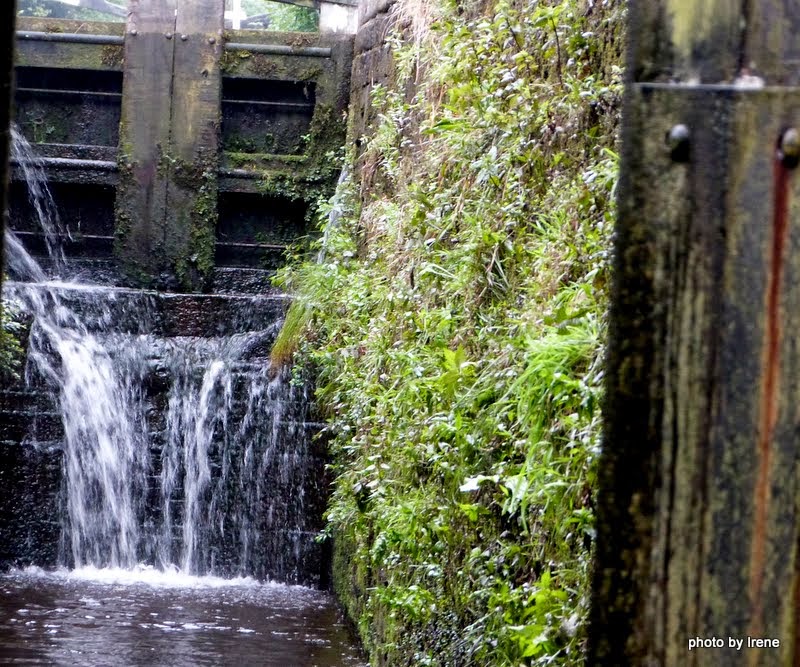 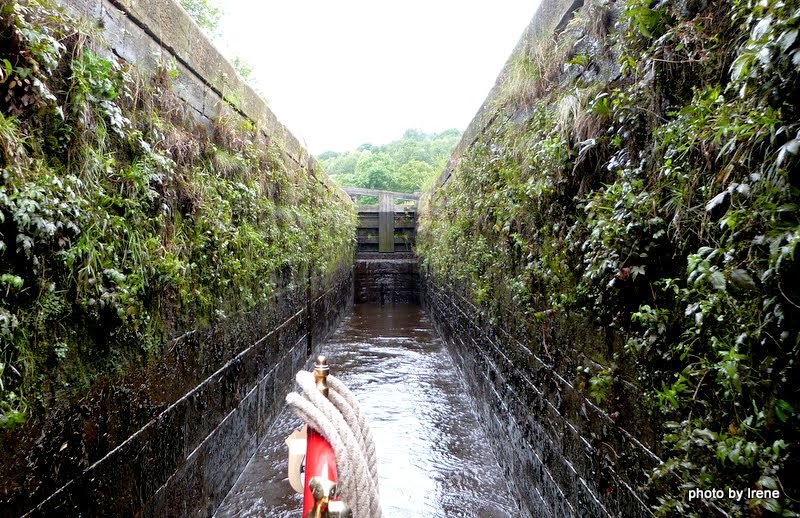 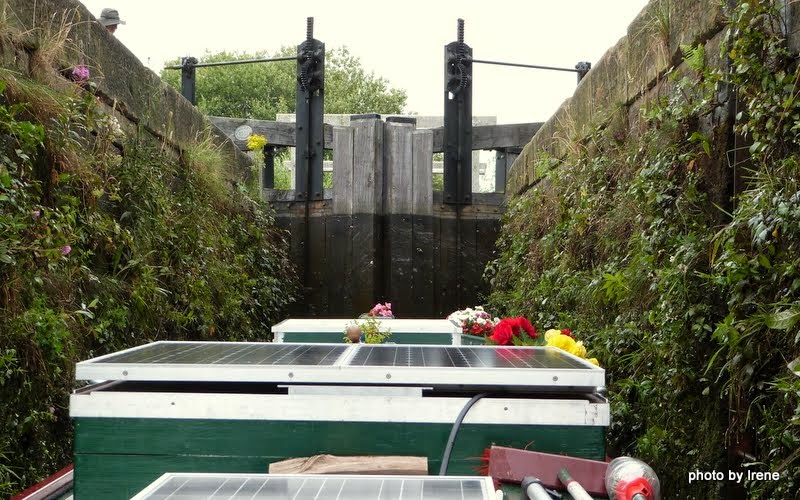 We did have a few problems especially at lock 31. With it being my turn to do the locks, I found the bottom gate open and try as I might just couldn't shut it. I beckoned to Ian to bring FS onto the landing and come and help. Well with a lot of pushing and pulling and opening and shutting, Ian managed to close it enough for me to get the lock full. 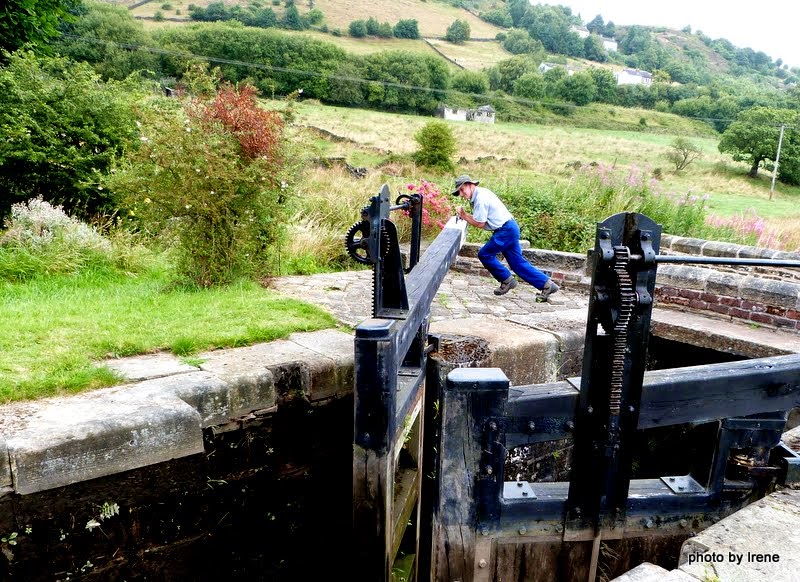 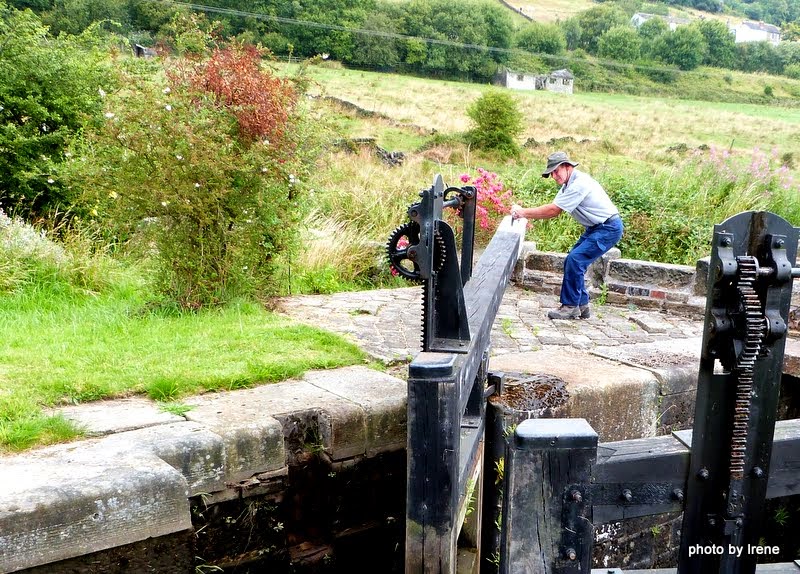 Then having walked down to set lock 30, on my way I had to paddle through a stream of water running down the towpath. Seems here is another lock that needs a bit of TLC. 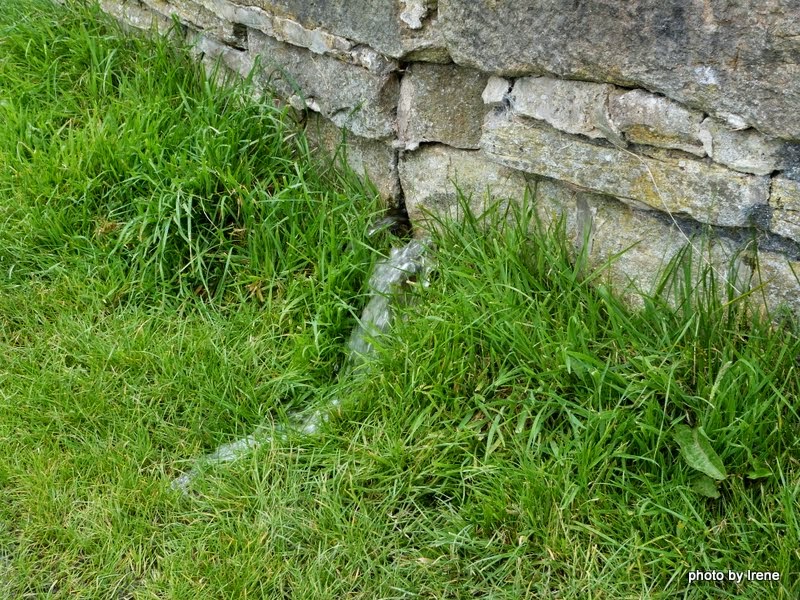 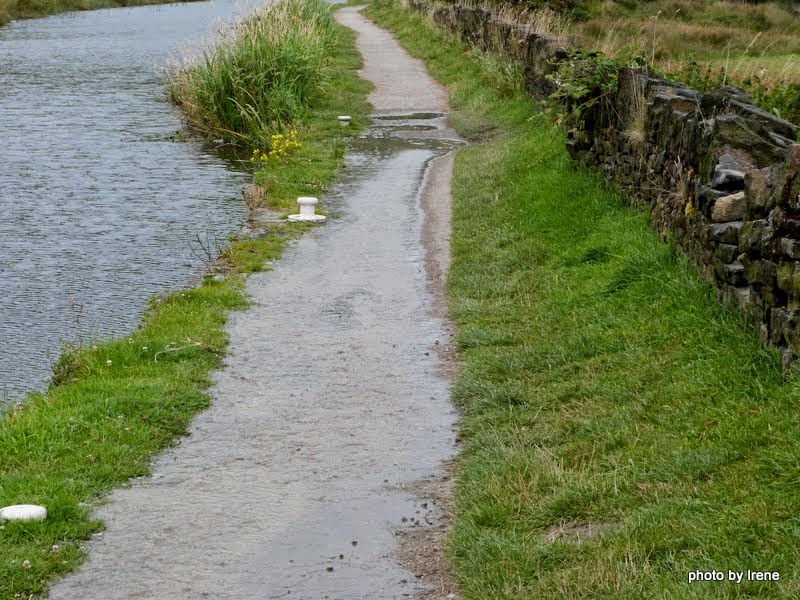 As we got nearer to Slaithwaite the channel between the locks got narrower and narrower. Its not by the usual reeds that are the problem but what I can only describe as horsetail  plants. 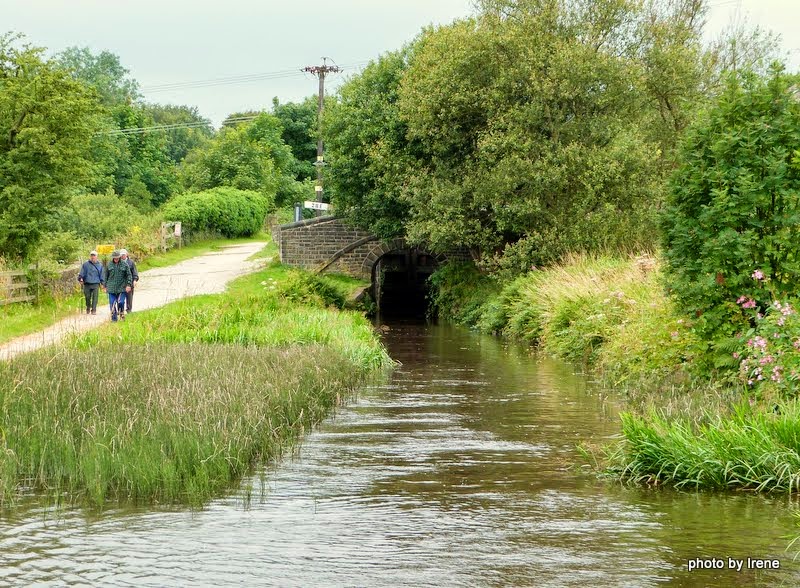 Then we reached lock 24E. Now this is the first time in all the years traveling that we have come across a guillotine lock. It happened to be me that had to try and work it out, but once Ian got in the lock, both of us read the instructions and after a bit of head scratching, Ian left me to it. 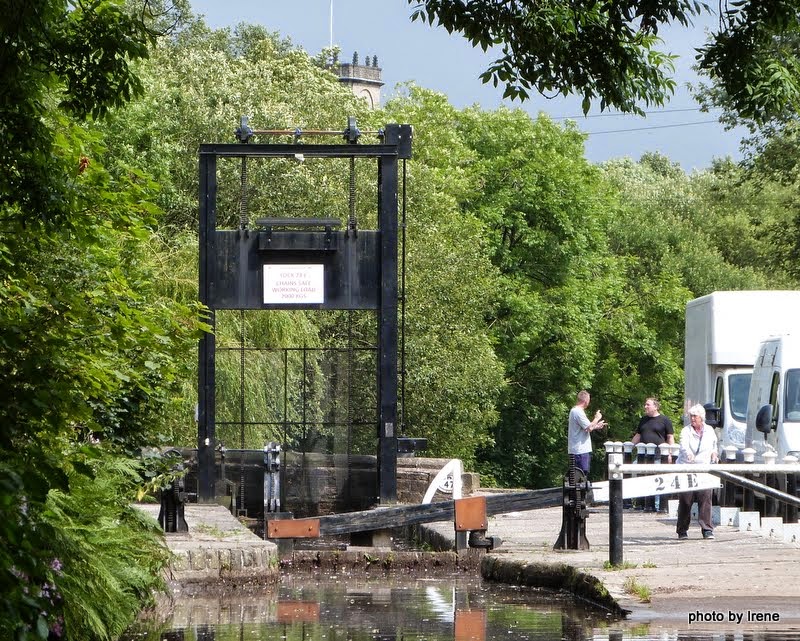 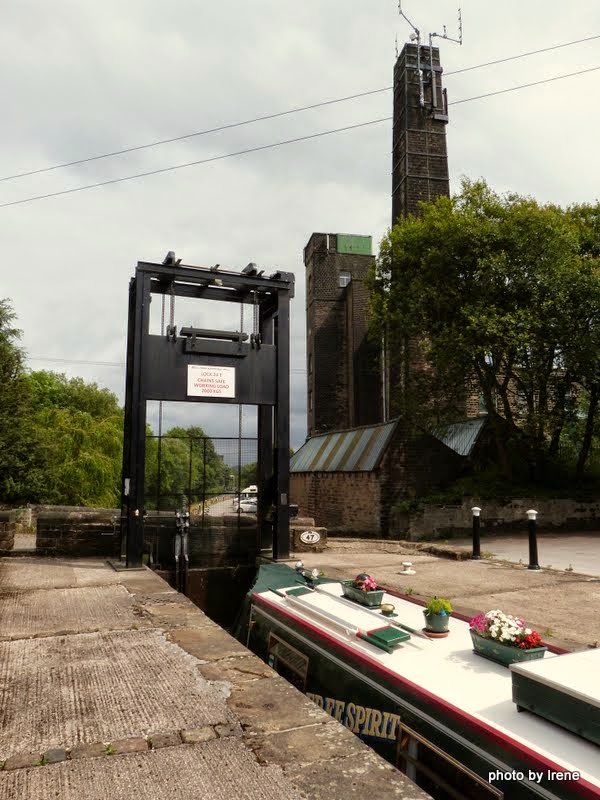 Now the first part is easy. Open the paddle on the guillotine gate and let the water out. Wait for it to equalise and lift the gate. Yea right!!!! This was the hard part, winding up the gate. I was exhausted after a few turns! It goes up very slowly, two turns needed to lift it a couple of inches. I wish I had counted how many times I turned the windlass I hadnt fully open it before Ian shouted that he could get underneath. Thank the Lord for that. Not sure how much more I could have done! 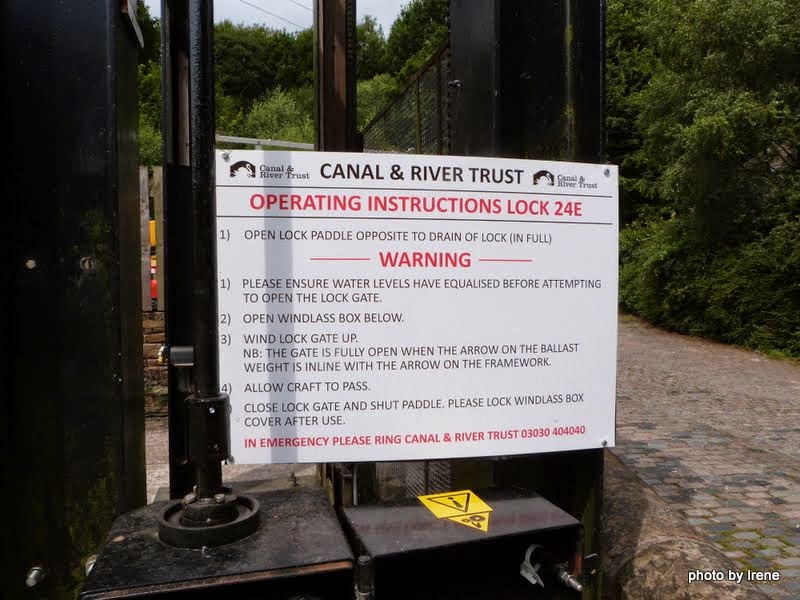 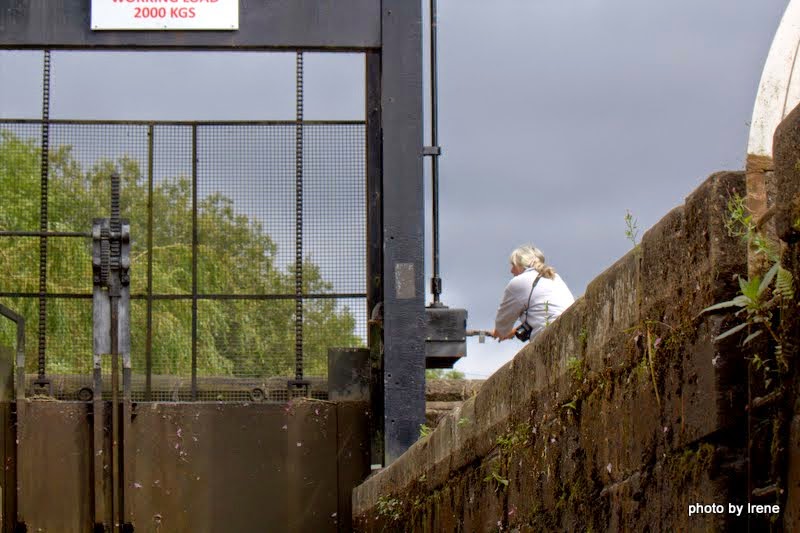 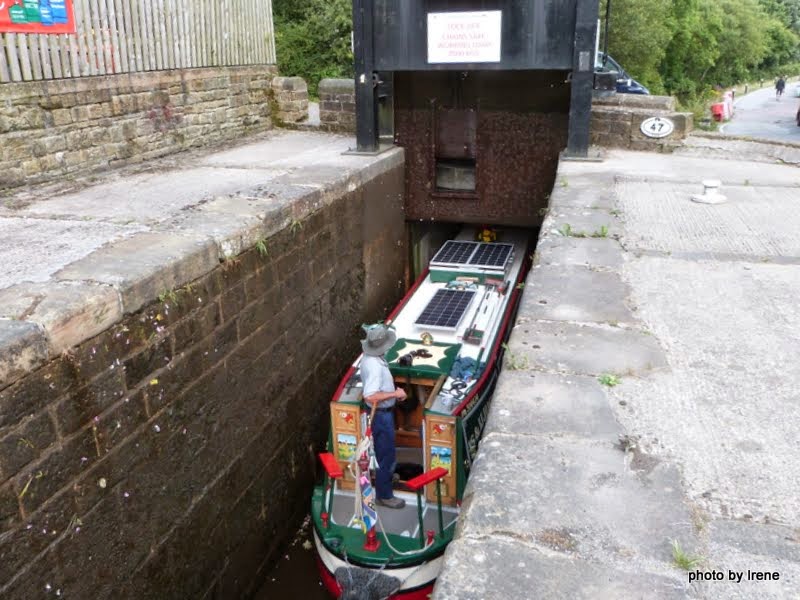 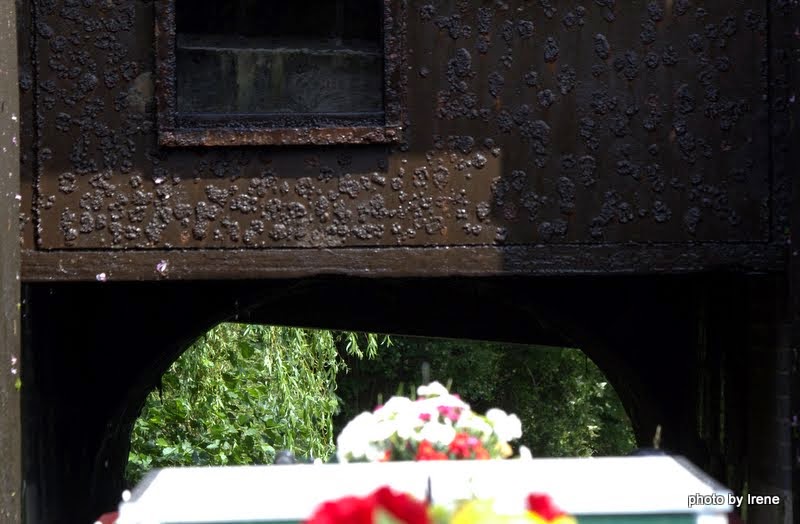 Winding the gate down was much easier and, at the next lock, I got Ian to take over the lock wheeling again. We only had 3 more to do, thankfully, and entering Slaithwaite the canal goes straight through the town. Imagine the gongoozlers watching your every move! After lock 22 a very narrow channel takes you to the last lock of the day. Two very very low bridges along the channel meant I knocked the heads of my begonias and had to quickly remove our Buckby cans before they went over the side!


The facility block was situated below the lock and after doing what us boaters do best (loo emptying) we moored on the visitor moorings right by lock 20. Here we stay until Saturday. Christine is coming on Friday to drop Echo (Jades sister) and one of Josh's stick insects for us to look after for a week. Tomorrow we rest and go exploring. Total miles 3, locks 21 and time taken 6 hours.
Posted by Ian and Irene Jameison at 7:43 pm