I'll get to the title in a mo as that was all about today's antics, but first to yesterday. After mooring up in Hopwas mid afternoon we arranged for Ian and Dennis to light the BBQ's by 5.30pm. Us ladies had been busy prepping the food, new spuds tossed in butter and mint cooked to perfection by Gillian, a scrumptious lemon meringue pie curtsey of Heather and all the meat (chicken drumsticks, sausages and beef burgers) as well as the coleslaw, supplied by me. What with the Garlic bread made by Ian and all the salad stuff laid out on Dennis and Margaret' s large foredeck, we had a real feast on our hands. 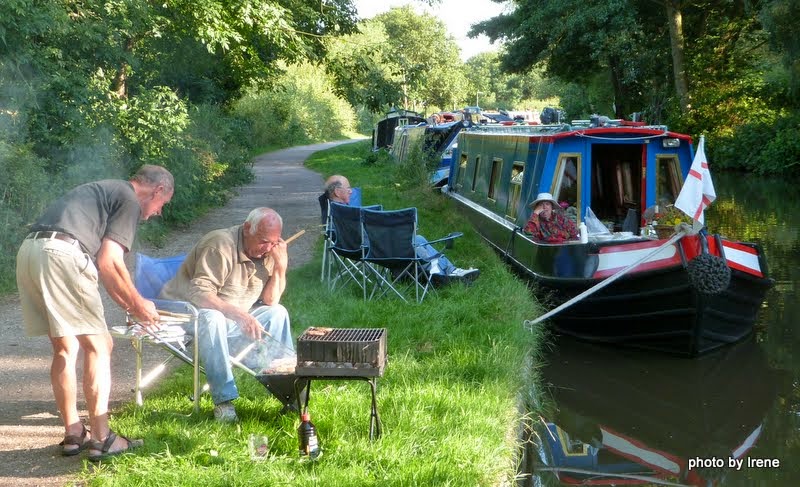 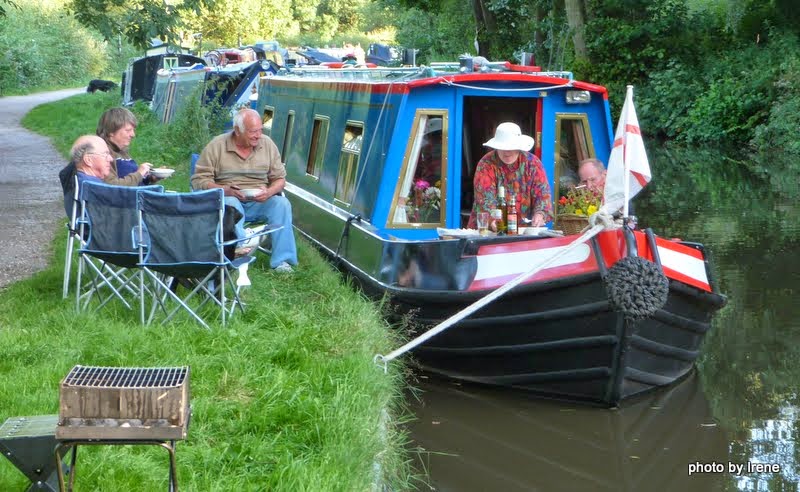 Not long after we had finished eating an interloper appeared. Frightened the life out of us when this duck suddenly flew up from the canal and landed on the table cloth. Talk about tame. Must have been fed numerous times by other boaters and seen how easy it is to get food. I had a horrible moment when I thought it was going for my wine. No one touches MY wine (-: 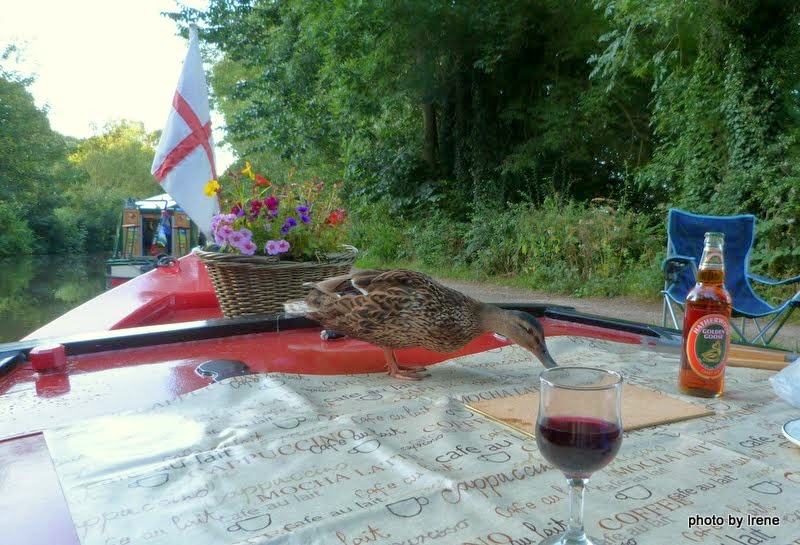 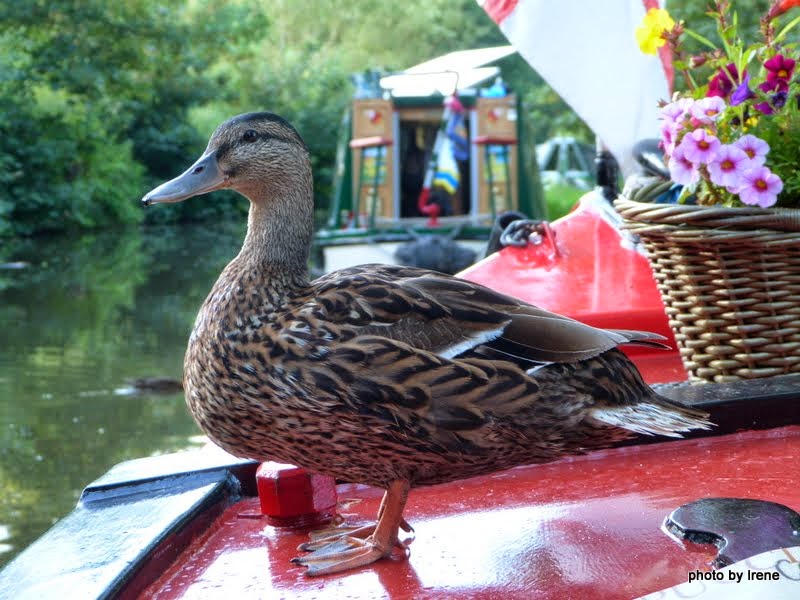 Then bold as brass it left Icing and went for a look around FS. I shot up and high tailed it back to the boat as I had visions on my home grown lettuce being devoured. With me around it took fright and went back from whence it came, and no damage to my lettuce. 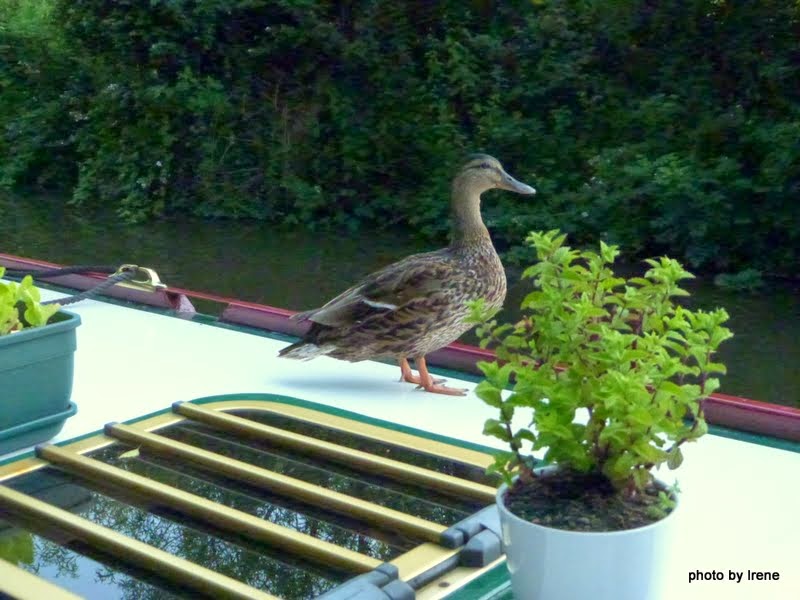 So now for today's blog title. Our band of merry men (Icing, Vixen and FS) set of quite early knowing that the earlier we get to Fradley and through the locks the better. It didn't quite work out that way as we picked up two boats on route with the lead boat on a go slow! Consequently we didn't arrive at Fradley Junction until 10.45am. With us having been lead boat on our band of merry men, we made a big mistake of pulling onto the water point to just go and empty the loo and get rid of the rubbish. Icing and Vixen sailed past and just as we were about to join them another boat came up from Junction lock and got in between. What none of us had realised was a queue had formed at Middle lock consisting of 6 boats us making the seventh. With volunteer lockies on you would have thought we would sail through but every time a boat entered and descended or ascended a sign had to be turned round informing those on Junction Lock what was going on. It all took loads of time, so much so, that from joining the queue at the Junction to getting into Middle lock, took best part of 90 minutes!

Having finally gone through Woodend lock and the last lock of our day, we thought we would make good time to Rugeley. Again we were wrong. Both of us couldn't believe it when we were approaching a moored Shakespear hire boat, (now Avente Leisure Group) who suddenly saw us coming, grabbed ropes and pins, started engine and pulled out directly in front of us. Ian's finger went straight on the horn while I tried to do an emergency stop. They completely ignored the fact that I was now virtually level with their back fender and, even when Ian ran to the front to give them a piece of his mind, they turned their backs! Then we sat on their bumper for mile upon mile trying to get past but not being successful. Why pull out on an oncoming boat then sit at 2 mile an hour. It's beyond me!
So glad when they pulled over to fill with water just after the narrows and we could slip past. They again ignored us, not even having the courtesy to glance in our direction. Once at Rugeley we met up with the Icing and Vixen who had been watching out for us and hoping that no one would come and nick the planned mooring they had in mind for us. Thankfully it was still free, so now having shopped and showered, we are both partaking of the amber liquid to recover from the day.

Posted by Ian and Irene Jameison at 8:31 pm