The body is too big for the head.

Hooray....we woke to sun. Finally, a decent day for our trip to Chirk Castle.

I must just say that the meal last night was brilliant, but they don't seem to know about portion sizes. My Scampi and chips nearly overflowed the plate. I counted 14 scampi, normally I would have had about 7 or 8 pieces. No way could I finish it all, and Ian's fish and chips was equally large. Thank goodness we didn't have a starter. In my opinion, they would get more return on serving smaller potions because folk may choose a starter or desert as well. That's more money per person for the proprietor. Anyway, I couldn't fault the service and the food was delicious, so the Holland Arms was one place I would recommend, even though it was off the beaten track.

It took nearly 2 hours to get to Wrexham, road works scuppered the preferred route and the sat nav kept trying to turn us around and go down the road that was closed. Back to a paper map, then, at least one can get a rough idea of different routes.

Arriving at the castle entrance, wow, such wonderful impressive gates. 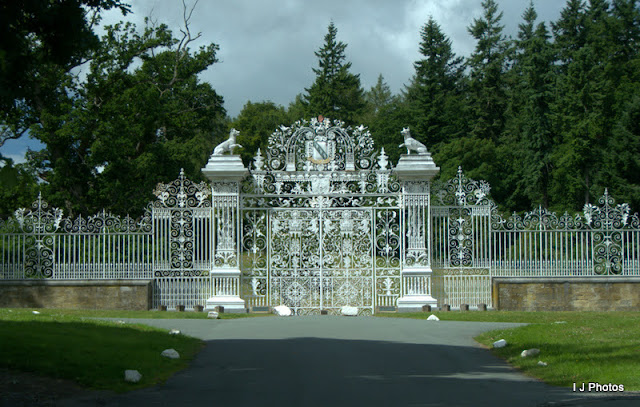 The road bypassed those gates, instead took us up a lane leading across the estate. Gosh the place was big, I read somewhere that the castle sits in 480 acres, plenty of exploring to do then.

We had a bit of time on our hands as the castle didn't open to the public until midday, so a stop at the café for tea first.

Not sure what I expected when entering, at first everywhere seemed dark and dingy but to think this place was built in the 13th century by Roger Mortimer and later furnished by the Myddelton family as far back as the 16th century, it has every right to appear dingy. Going further into the rooms and one can see the different styles of furnishing as the families taste changed throughout the decades. 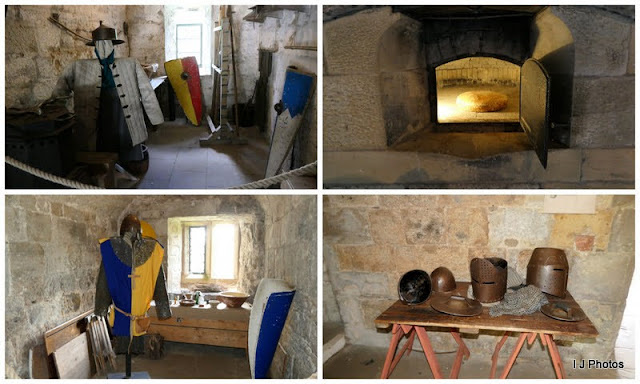 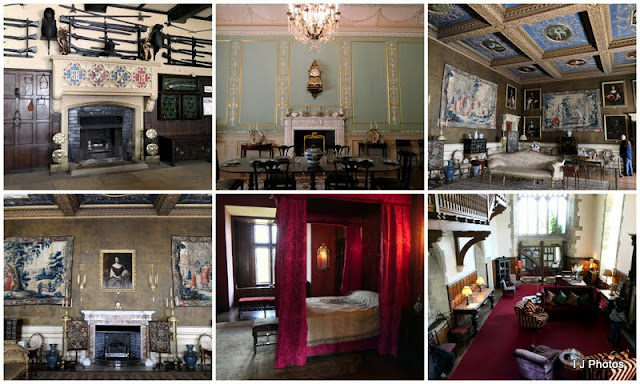 Having tackled all those steps at South Stack,  you would think we would have learnt our lesson about exploring the dungeons and upper rooms 'cos loads more steps to go down and climb, and all time-worn and very uneven. 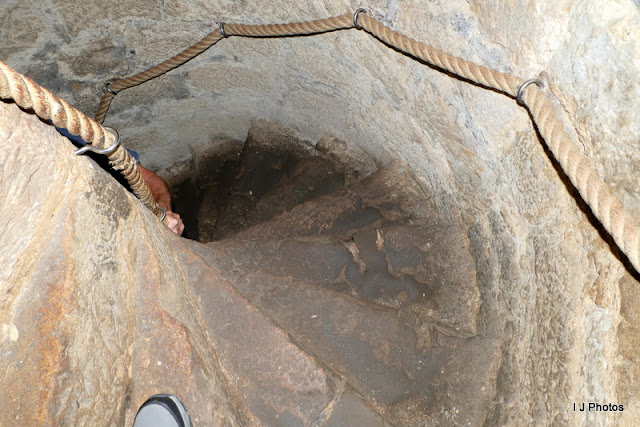 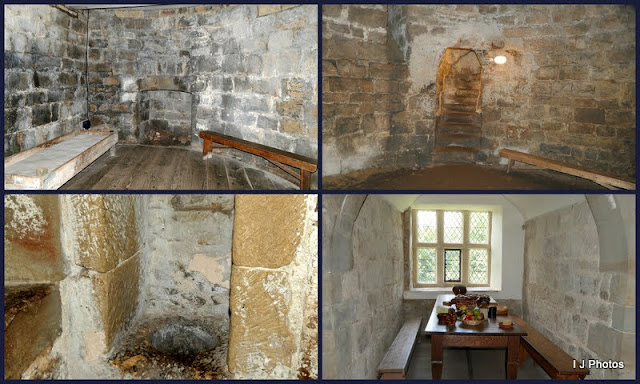 I had to do it...to good an opportunity to miss. 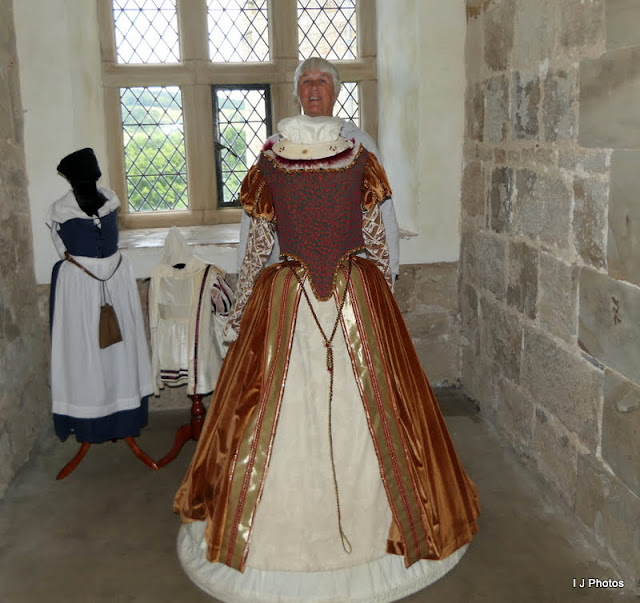 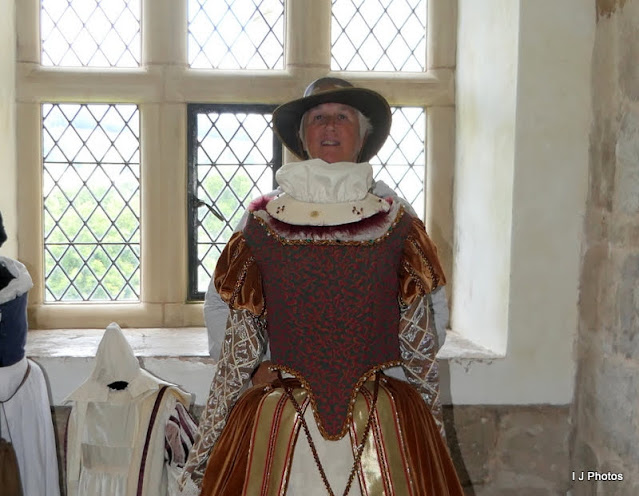 We both suffered, Ian with that hamstring and me with my knees but never one to quit, teeth was gritted and pain put on the back burner. It was a relief to climb that final step and head off for the gardens.

They were magnificent! One of the best gardens we have seen in a long time. These photos do not do it justice. 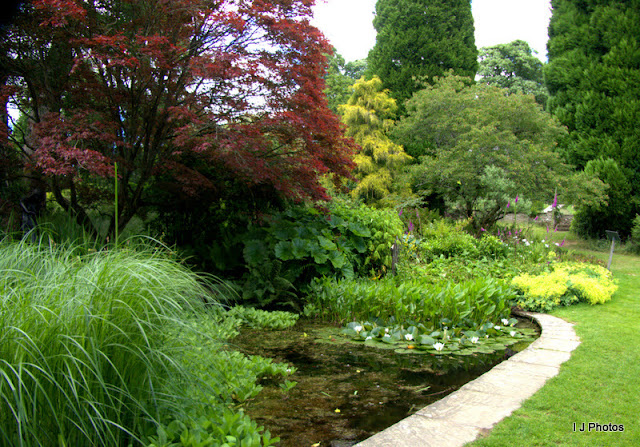 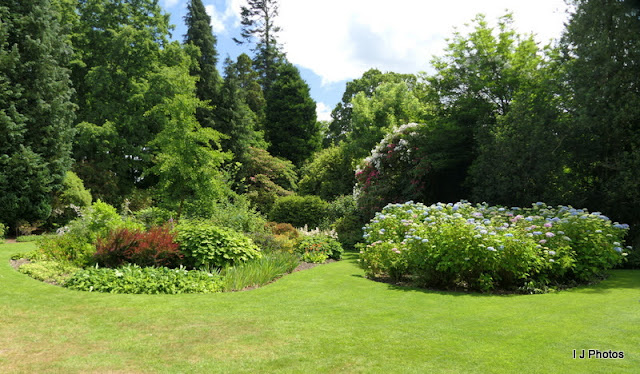 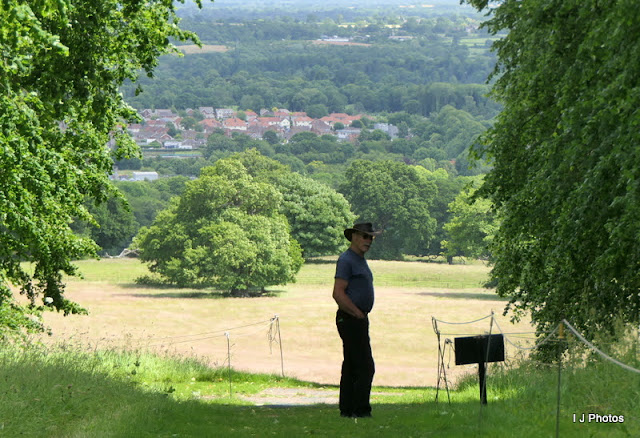 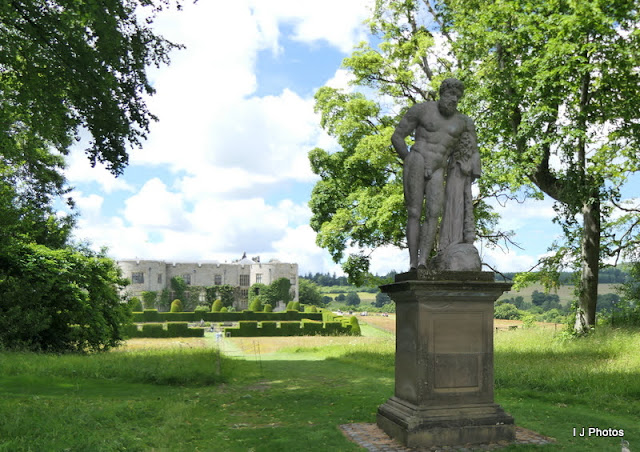 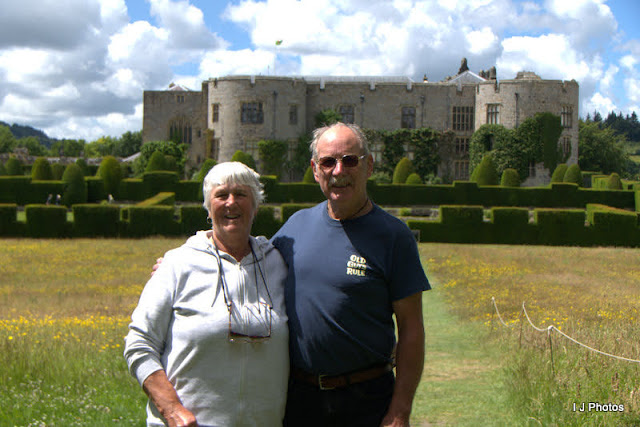 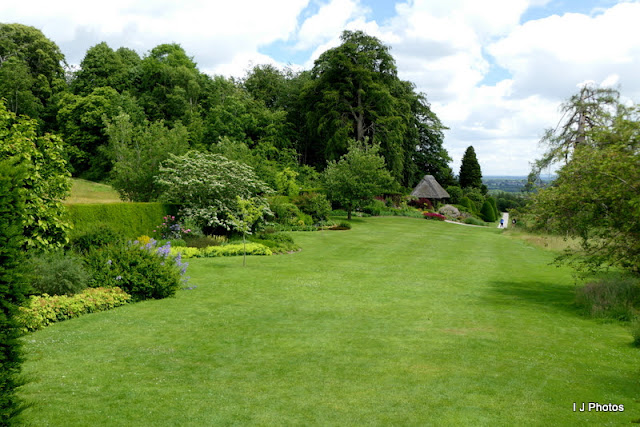 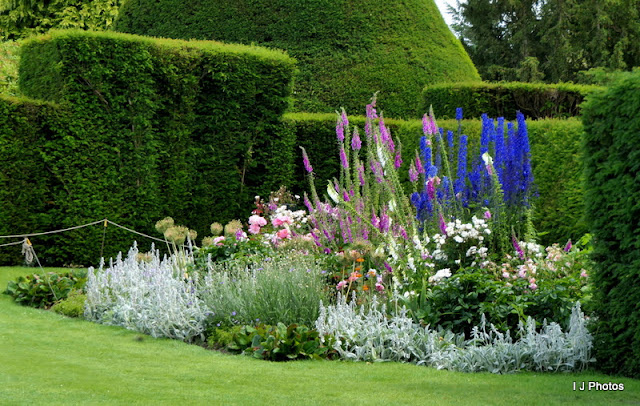 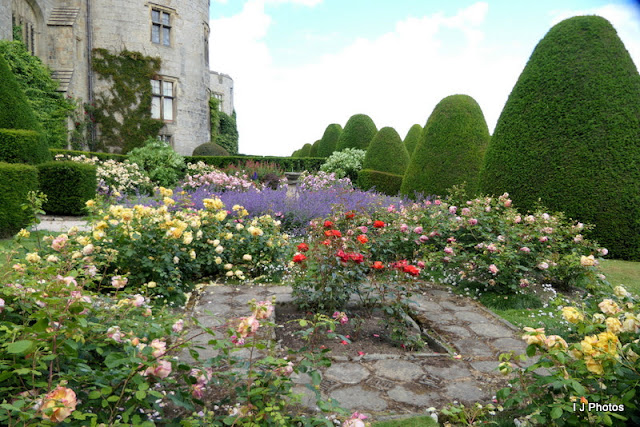 The road back to MB was down hill. Both find going down painful, so we requested a shuttle bus. Yep, we have finally succumbed to old age and creaking joints!

Tomorrow we head for FS. Hopefully for only a couple of days but how I will feel after having that wisdom tooth out, well only time will tell. This then will be the last post until we set off again and go 'op north' to Northumberland, we do so love it there.

Just a little teaser to all you narrow boaters out there. Where do you think we have stayed tonight? 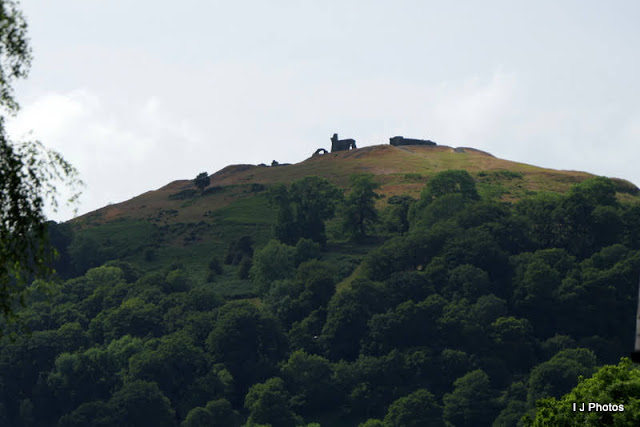 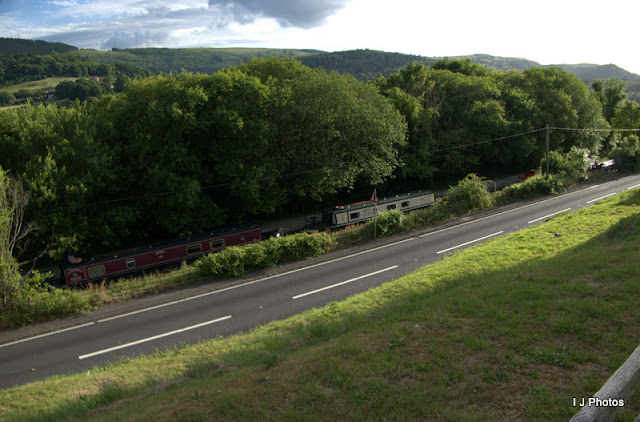 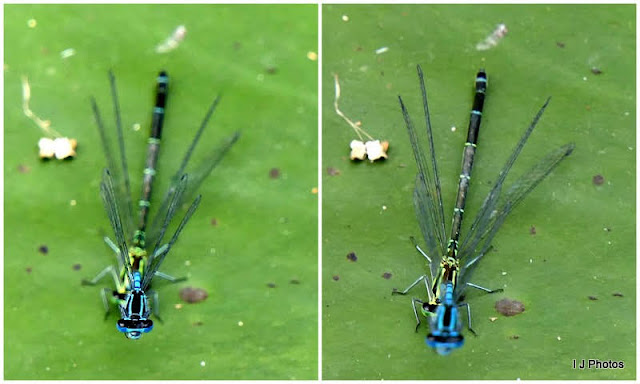 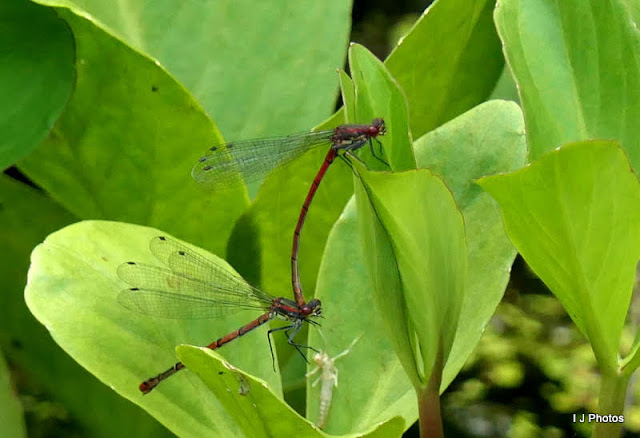 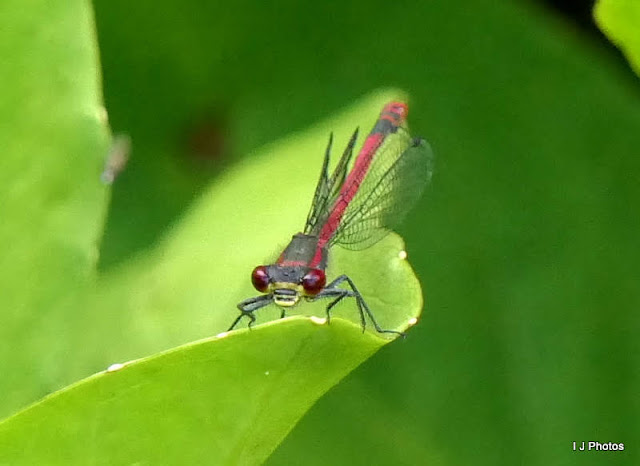 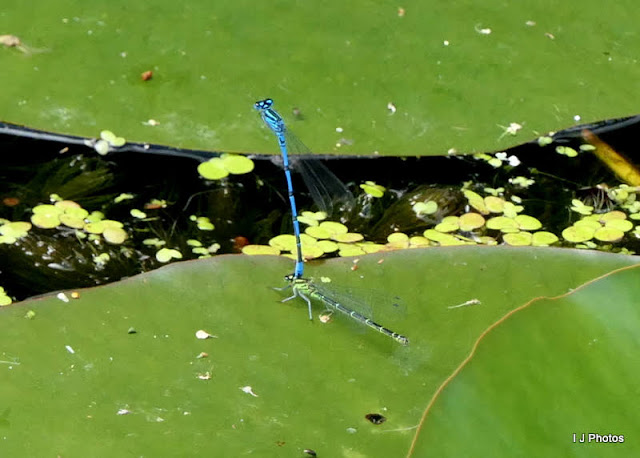 I hope you have been to see the canal!! That looks like Dinas Bran, so you must be in lovely Llangollen!
We have just made the last payment on our new boat, sale should be completed tomorrow ... hopefully we will be afloat in a couple of days
Debby and Dave

That is Dinas Bran Debby, and where we stayed overlooked the canal. Another hint, it was in a very popular pub.

I couldn't have told you exactly where, Irene, but I knew it was Wales and I knew it wasn't too far from a Black Prince base ...

That pub may be the one where we met up with my uncle and his wife - they lived in Upper Gro, Trehilig near Powys and came to meet us when we were on a BP boat. David was sore as he'd wrenched his finger or thumb when he grabbed the handrail as he nearly fell off the boat. He had it plunged in iced water in the pub, and none of us were particularly sympathetic towards him - so no change there then ...

We've just booked our flights to the UK for next year - yippee!

Debbie, that is really lovely news re being afloat again shortly.

Late April for us - after almost 3 years of being onboard so far. It'll be 3.5 by the time we get there!

Hi Marilyn, you're right about Wales, but not right about the Black Prince Base. It was actually at the Sun Trevor, not far from Trevor (Anglo-Welsh base) and the shallow, narrow canal leading to Llangollen.

Great news that you're finally coming to the UK, hope your pockets are deep 'cos prices have risen over here astronomically.

We will see you soon, roll on in October!