With 12 miles and 16 locks to reach Langley Mill, we left Sawley a little after 8 am. Of course, leaving this early meant Sawley automated lock would not have CRT in attendance, so Ian got to push buttons. 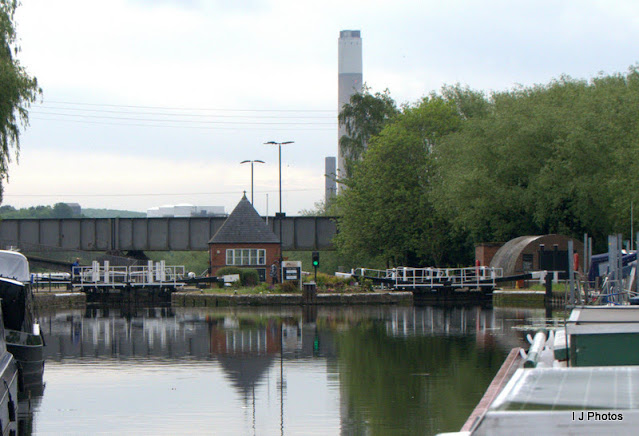 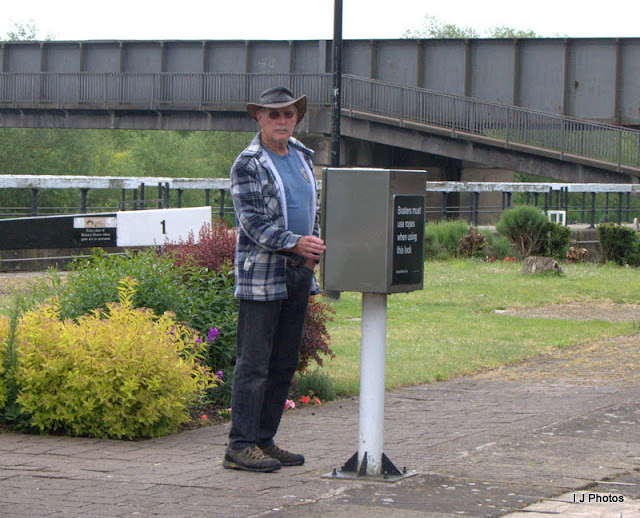 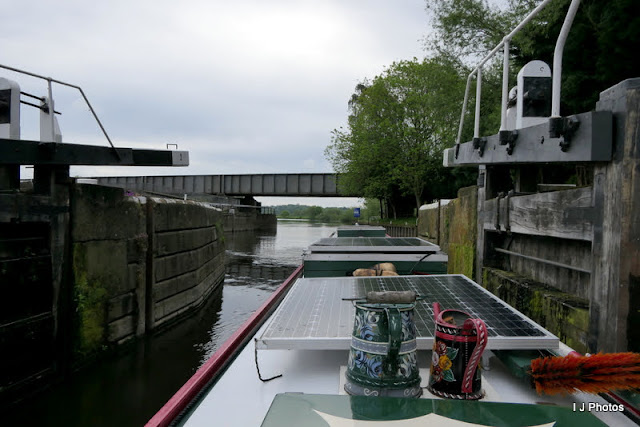 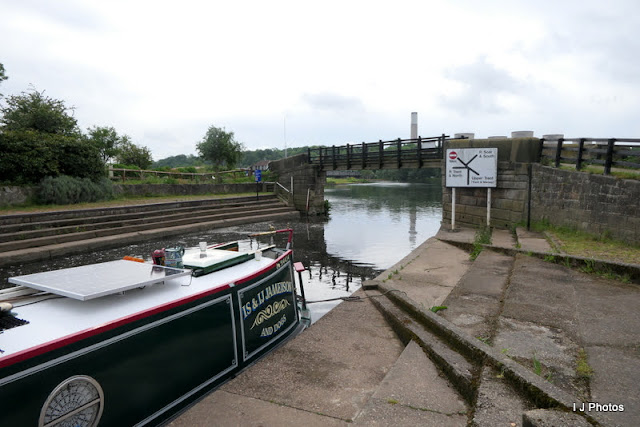 Having to empty Trent lock didn't bode well, could mean all the locks would be full. Fully aware of how long the journey up would take us, it was very difficult to get a move on for the first mile because of the full offside moorings, it took an age to reach Long Eaton lock. 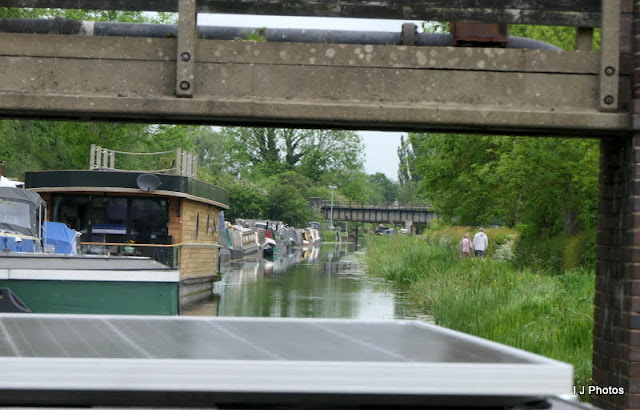 I knew it, that lock was full...blast, it was going to be a long and challenging day! And when I noticed Ian closing the top gates, I had a horrible feeling this was to be our lot for all the other locks. 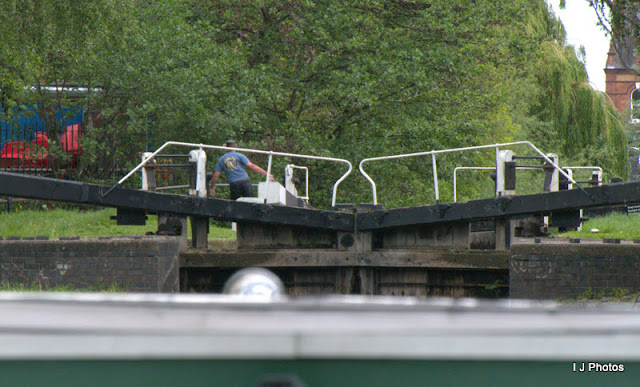 Thankfully, Ian came back to say these gates always open if the wind blew toward them, so that was a relief.

Sandiacre lock had a boat exiting, goody....one with us, and did that mean all the rest would be with us too? 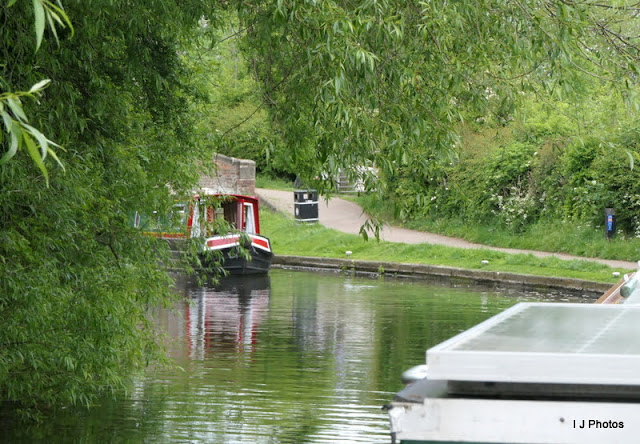 We also managed to acquire a locking buddy at Pasture lock, Nb Straight and Narrow. They would be with us for the rest of the journey to the top. And of course names were exchanged, so Mick and Elaine, it was a pleasure to travel with you and for your help. 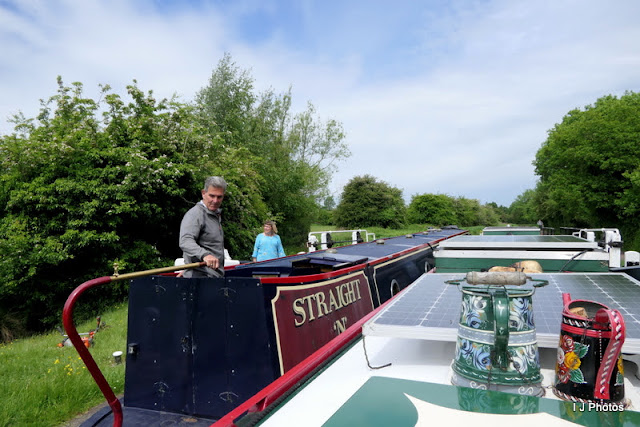 Also, at Pasture lock, Gareth, a CRT employee, was grass cutting around the lock side and landings. From him, he told that the grass cutting contractors would only mow twice a year. He took it upon himself to ask CRT's permission to do it himself. The Erewash has been his patch for years and when it got so the bollards couldn't be seen at the lock landing and the height of the grass on the lock edge was so high he reckoned it made it dangerous, he decided enough was enough. Good on you Gareth, after all, what was CRT thinking of by stopping a regular cut throughout the summer.

Stanton lock was being filled by another CRT guy, probably checking all the paddle gear was working. Took several hails from Ian to make him stop. "Oh" he said, "So few boats about, I hadn't expected any." 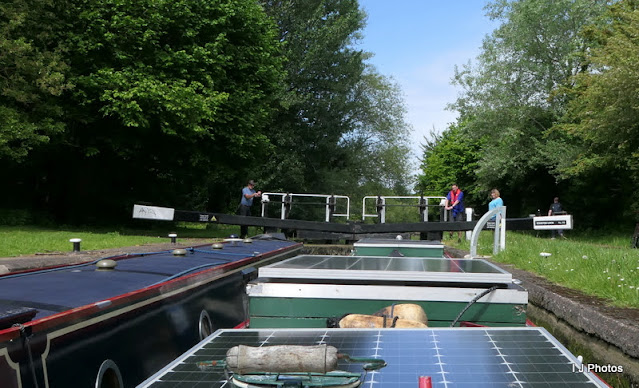 Anyone that has come up the Erewash will have had to negotiate four very low bridges to get into the lock. Only one boat at a time can enter due to the arch, and it was at Hallam Field's lock that I very nearly wiped out the solar panel! Ian looked on in horror as I got awfully close but phew, somehow with millimetres to spare, I got through. (it was my lack of concentration trying to take a photo, but I won't tell him that). 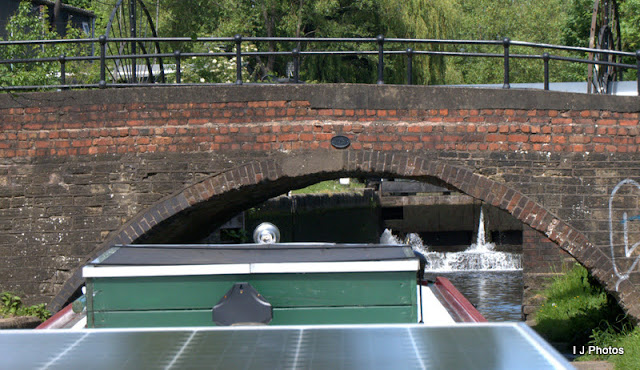 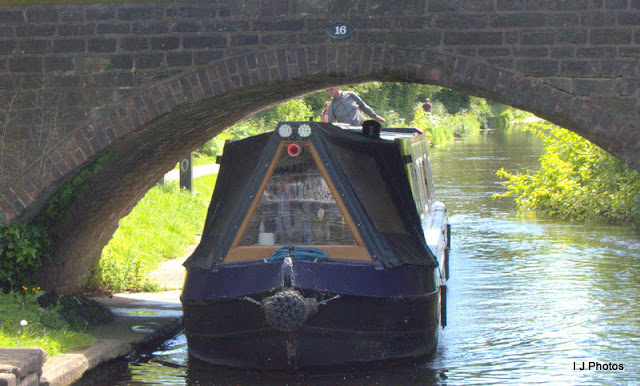 Gallows Inn and another lock needing emptying. I went in first but somehow could not get FS against the side so consequently when Mick brought Straight and Narrow in, both boats made contact. A horrible scrapping sound and both gunnels with more scratches. Mick then asked if I would like my fenders down, well in a way it was a good job mine were up because we may have got wedged together. It's something we have never done, travel with fenders down. seen too many near accidents with boats getting 'hung up'. Anyway, the reason was a branch. A blooming great big branch! Ah, no wonder, now it all became clear. 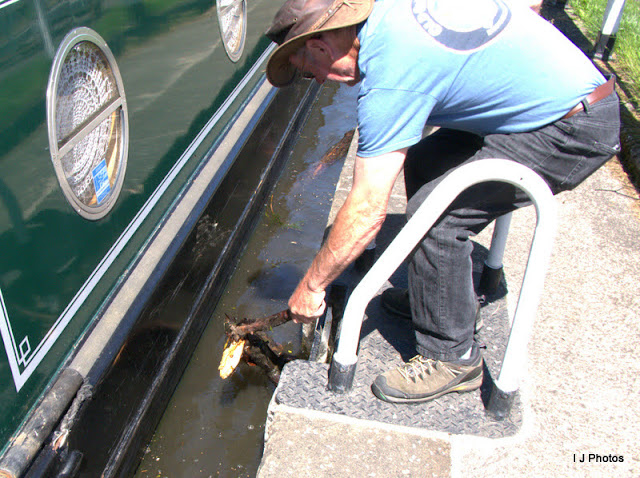 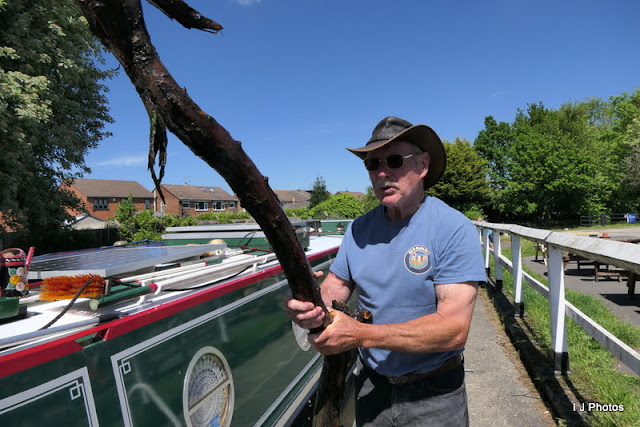 It's a pain coming out of Gallows lock, the canal does a sharp right and Mick unfortunately didn't quite get the turn right and ending up tangled in the opposite garden hedge! 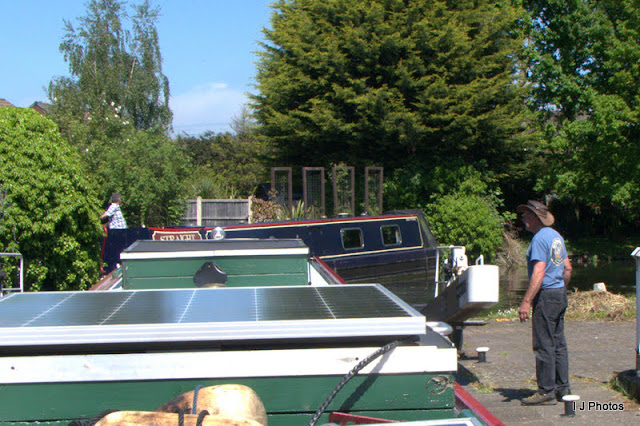 We made it to Langley Mill in just over 8 hours. Ian was knackered and my legs ached from all that standing. I was right about what I said in the beginning of this post, only two locks were with us, the rest all having to be turned. Got ourselves moored and took the usual photo, only this time mainly because of the state of the grass on the triangle. Disgraceful, what does it say to boaters coming up the Erewash, that this canal is unloved and not cared for. I think CRT need to think again on their grass cutting policy. 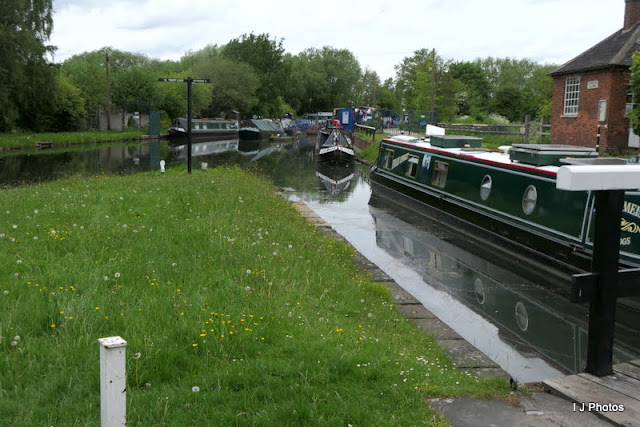 That's it for FS, she will get her bottom blacked by us next week, we will attend a Jubilee party on the 3rd June, we hope to deck FS in Union Jack bunting, and then off with the motorhome on the 10th. No more cruising this year because if all goes to plan, we will be off to New Zealand in October for 6 months. Very, very excited about that.😎😁✈

And seen on route,

Oh and remember that boot print on the side of FS's cabin side? Well, Ian found another on the bow! 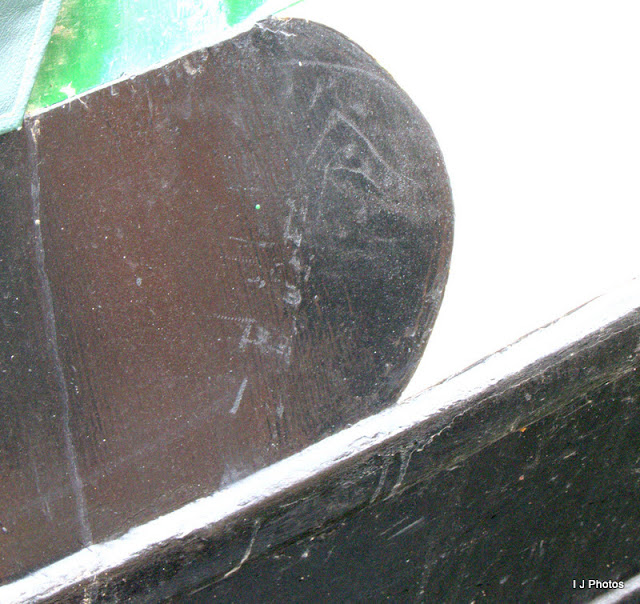 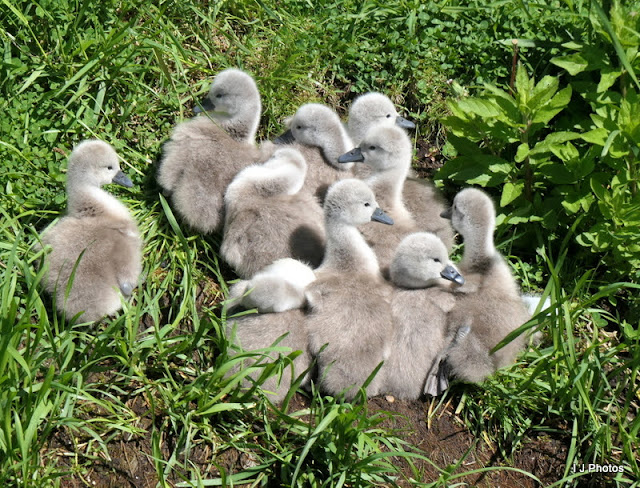 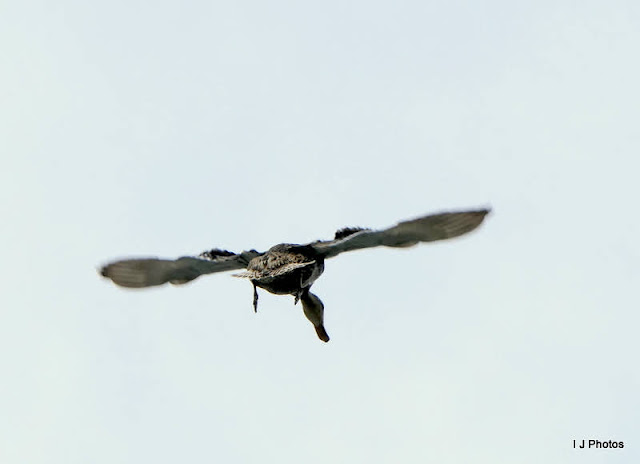 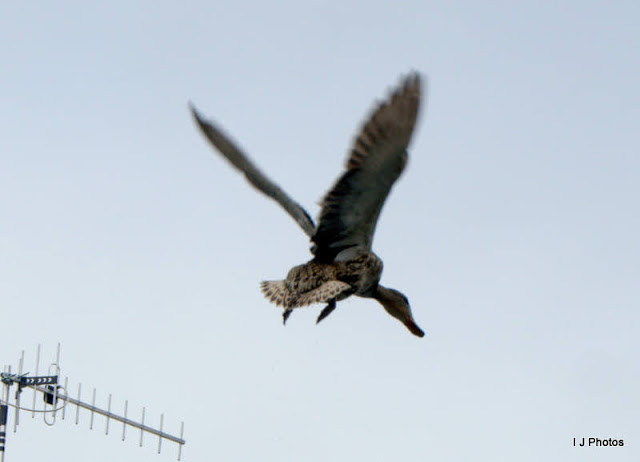 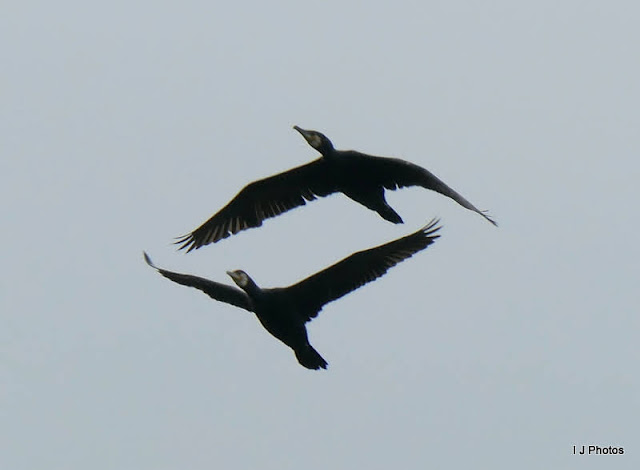 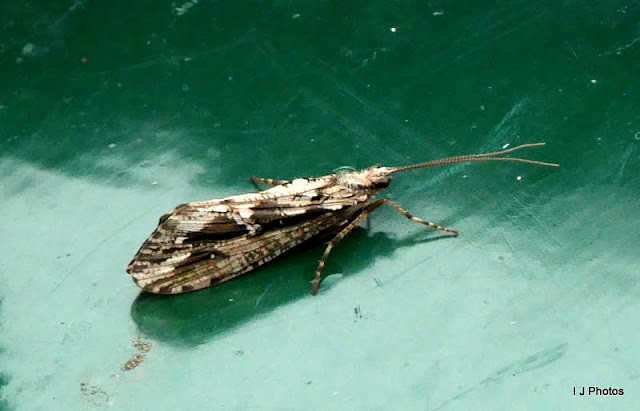 Posted by Ian and Irene Jameison at 6:56 pm

Glad you made it safely back to base and just love your captions on the Moorhen photos!
Time to relax and put yer feet up inbetweentimes eh?
I've thoroughly loved following your summer cruising adventures, plus all those grrreat pics.
Thank you, as I know it takes a great deal of time and patience to put it all together.
Ann Makemson xx

Thank you, Ann. Now it is time for the motorhome adventure. Xx