The wanderers had returned to Waikanae late morning of the 17th. I had a mission, meet my Uncle Henk who I thought was a long lost uncle. Turns out I did meet him when I was in my twenties when he came over to England to visit my mother (a touch of senility perhaps on my part or could it be excess of the red stuff consumed) Anyway my Dutch mother was the eldest of 12 children and Henk is the second youngest of the twelve. In his late 80's I was unsure what I would find. Facebook did come in useful on this occasion because I made contact with a cousin living here in NZ who gave me an address to go to. Turns out Uncle Henk is her dad and he also lives in Waikanae!

The visit was special and very emotional, I know that I probably won't see him again but the time spent reminiscing was one to cherish and never to be forgotten.

Sad day for us today, we said our farewells to Marilyn and David. Mind you Ian did breath a sigh of relief as we drove away. "That Marilyn is a Very Bad influence on you" he stated. Hmm, wonder what he meant? Maybe it was because of the clothes shopping we did after a scrumptious breakfast at a cafe in Waikanae from which Marilyn had conveniently left her purse behind. Ian, the only one with any money, paid for ALL the breakfasts. I am then whisked away to a shopping Mall leaving the men to return home with two of Marilyn's friends, Bruce and Gary. The look that I got from Ian on our return when 4 new tops had been bought (well everyone I tried on looked great so had to have them) was priceless! "I only paid for 3," said I trying to soften the blow. Marilyn out of the goodness of her heart (and the fact that Ian had to pay for breakfasts) bought me the first most expensive top. So massive thank you for that Marilyn and for you and David making our final week on North Island so special. Oh and Ian said he loves you really 💝😘 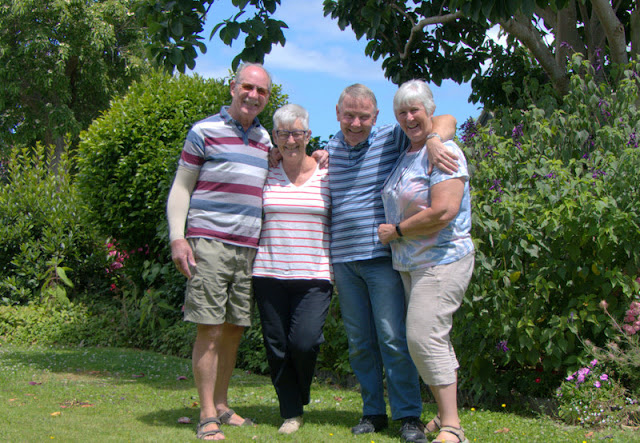 Next stop was Wellington and a place called Wadestown. Having made contact with 1 cousin suddenly more came out of the woodwork, a total of 7 to be precise and a meal had been arranged so we could all meet. Several more had other engagements and couldn't make it but wow, that reunion was one I won't forget in a long time. Invites have been issued to all to join us on FS, may well be quite a crowded affair but masses of fun nevertheless.


Off to South Island tomorrow, a very early start as the ferry leaves at 8 am and of course, we have to be there an hour earlier. Roll on our next adventure.

Posted by Ian and Irene Jameison at 4:51 am

I have enjoyed your trip around North Island and look forward to the continued journey on South Island. Jennie x

I'm sure your trip around the South Island will be just as exciting, with plenty more adventures to be had! Safe travels.