And I thought there would be nothing to blog about!

It was extremely windy this morning but we set off early to try and beat the rain. If possible we wanted to be at Long Buckby by tonight as our long awaited second Buckby can will be ready to collect tomorrow. The going was tough in places because we kept creating a wash and so creeping along at about 2mph was all we could manage. Me thinks some dredging is needed. As we approached bridge 28 there, perched high in a tree, was a man with his chopper ( actually it was a chain saw ) cutting down overhanging branches. 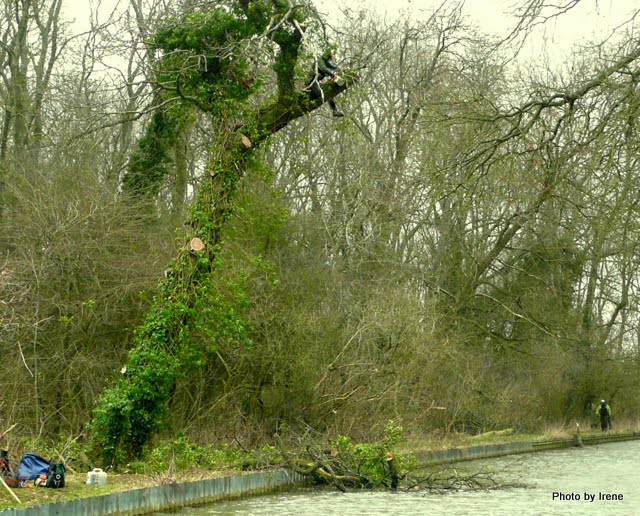 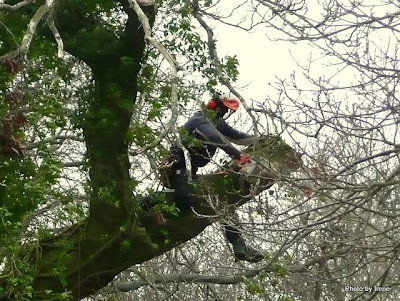 As we continued on, we saw more and more cut branches laying on the towpath. The only problem was trying  to get into the side to collect it. We didnt fancy getting stuck and, as Ian had already cut up and filled another 14 bags with the wood that we had collected earlier, he didn't think it was worth trying to get anymore. But then, right by a convenient piled edge, was a stack of wood already logged into manageable pieces. Well, even Ian couldn't pass that opportunity, so here we are again, roof full of wood ready to be chopped, and the boat listing badly once more.
.
﻿
﻿
﻿﻿﻿﻿
﻿﻿﻿ ﻿Once all the wood was safely stored on the roof we continued on our journey, and literally, just round the next bend, was Nb Heron collecting wood from another pile left by the tree fellers. After a laugh about great minds etc we left them to it. That's when the rain started. And boy did it rain. We badly need it but it really was very miserable travelling with the wind blowing the rain into one's face.  After feeling more and more like a drowned rat and starting to become a bit despondent, both of us suddenly perked up as we became aware of this pitiful bleating coming from a field as we approached a bridge. Ian suddenly spied a lamb in the water and we realised that it was the Ewe making all that noise. Thankfully the lamb managed to get out but as we drew level to the pair, there, in the water and frantically hanging onto the bank with its front feet, was another lamb. Ian managed to slow the boat down with the aim to grabbing it and giving it back to its mum. It amazes me that, as a new born, they can manage to get themselves out of trouble, and luckily this one also managed to escape the water. With the drama over we left them happily suckling from their mum.

We eventually made it to Watford Locks. We saw plenty of contractors about but no sign of the Lock Keeper. So we had no option other then to DIY. We managed to do the flight in 40 minutes, which was pretty good going seeing as Ian had to set all the locks. The rain had, by now, stopped and after another couple of miles we arrived at Norton Junction. We decided to moor before the junction as neither of us fancied going down Long Buckby flight tonight, especialy if all the moorings were full at the top.  I for one was ever so glad to get in the warm and, after a lovely hot shower, I felt almost human again.