Yep we're finally here. Our plan was to leave midday but after washing the boat and with no other boat even appearing to move, we decided we would get underway and start the mad exodus. So tiller on we set off by 8.45am. Sure enough first one boat pulled out then another and before we knew it we had us a convoy. With us being first we sailed through the Branston lock and started to look for S31A which was our allocated mooring. We found it just after the A38 bridge (Br No 33b), pulled in and luckily managed to get right into the bank. So we put pins in and then went off to see how far we would have to walk to the site. On the way we met Tim our Harbour Master. After introducing ourselves he then informed us that the mooring S20A was free and would we like to move there. So we pulled pins and headed off for the mooring. What we hadn't realised when we got therewas that the bottom was to near the top and we hadn't a hope in hell of getting into the side. Eventually after a lot of maneuvering we managed to get within 4 ft.
﻿
﻿
﻿
﻿  We still had no idea how far the field was but at least we could see Shobnall Marina. We were pretty certain that the distance wouldn't be to far and after a 10 minute walk arrived on site. To see how the boats had been packed in was quite a sight, and this was still only Wednesday. There would be many more arriving today as well as tomorrow and although the Festival starts Friday afternoon I expect even more boats will arrive then,. 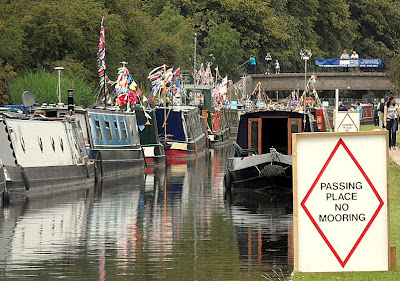 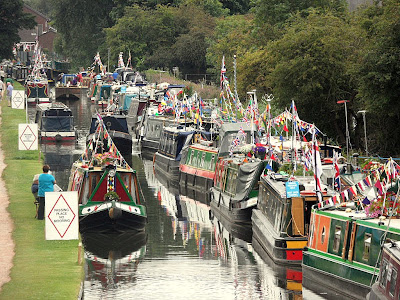 ﻿
﻿Once we got our boaters pack we decided to have a walk to Dallow Lock and see what was happening below the lock. We never got there because we spied a unique boat, the only one of its kind for now.
The owner of the boat said we could have a sneak preview before the opening on Friday. Basically his boat is a conventional hull but added to the front is an extension, which can be used for anything you like. The extension can be removed to allow easier passage through the smaller but wide locked waterways, ie:- Leeds and Liverpool. I'm not going to say much about it for now as the boat will appear in Waterways World and a full write up will be better then anything I can say. What both Ian and I do know is that it is a brilliant idea and would save the cost and upheaval of having a boat stretched. If ordered this year the cost of the hull would set you back about £10,000 and if painted in your boat colours would probably add another £3000 on top of that. Of course a full fit out would be considerably more. 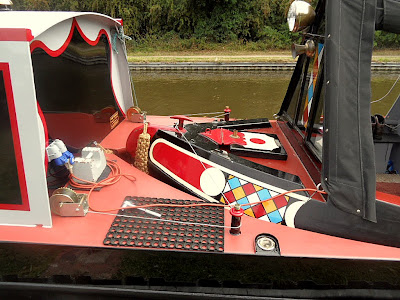 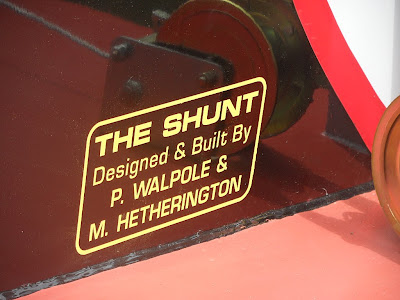 If you would like more information phone Pete Walpole 07889 914926 or e-mail p.walpole@yahoo.com
Posted by Ian and Irene Jameison at 8:34 pm

Looks like organised chaos lol.
Poor you being that far from the bank, maybe that is why the mooring was vacant. I hope that you enjoy a lovely weekend. We are at Stourport enjoying being on the electric. Have fun. xx