13 miles we cycled today. I can not tell you how knackered we feel! The going was easy though, along the Hull to Hornsey old disused railway line, and hardly an incline to be seen but the track!!!!! Mainly stony, some muddy bits and one very smooth section at Hornsea itself. And weren't we thankful for that section! It's the derrière you see. Our saddles have this so-called nice memory foam that moulds to your contours. Well it didn't mould to mine, just caused no end of discomfort! It wasn't until we eventually arrived back at MB that Ian realised my saddle had been pointing upwards, extremely painful on you know where which caused me to jiggle about on the whole route! Anyway I am getting ahead of myself because although this was the second time today that we visited Hornsea, the first was actually in MB.

Before all of this happened we first set off this morning to Skipsea Castle. An English Heritage site which we were keen to visit. Sometimes things are not what one expects and this was definitely one of them. Where was the castle? All we could see was a grassy mound. The information board showed where it should have been, we looked around but saw nothing. So off we trot, over styles through farmers fields toward that mound. 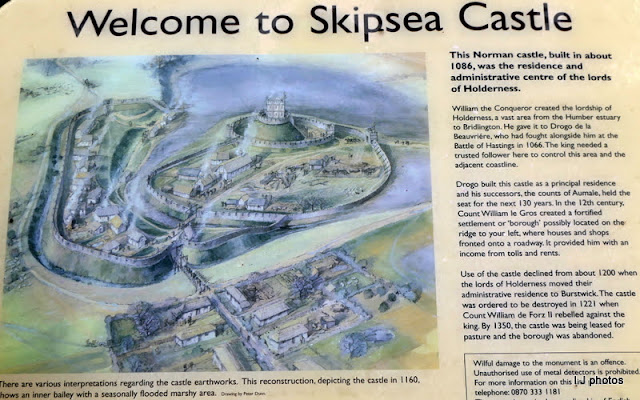 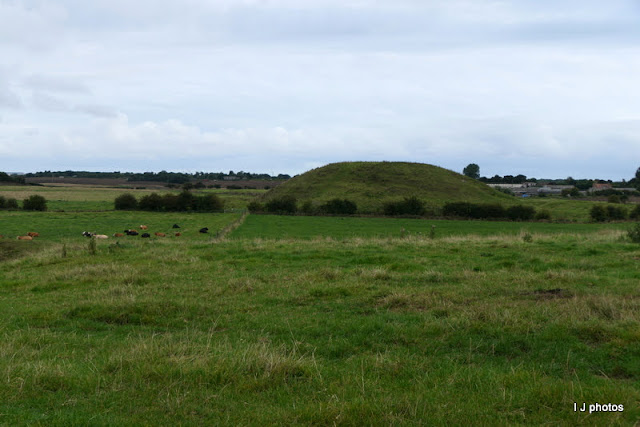 Rounding a corner of the field and there, right in front of us, and on the footpath, bullocks! Oh eck now what do we do. "Look" said I, "The farmer wouldn't allow his beasts to roam if they were dangerous, not on a public footpath anyway!" Heart in mouth I walked in front of Ian straight through the middle of the lot. They looked and chewed the cud, seemingly bored by these strangers walking past and not a sign of them getting up. Phew, we made it to the style and into the field with the mound. 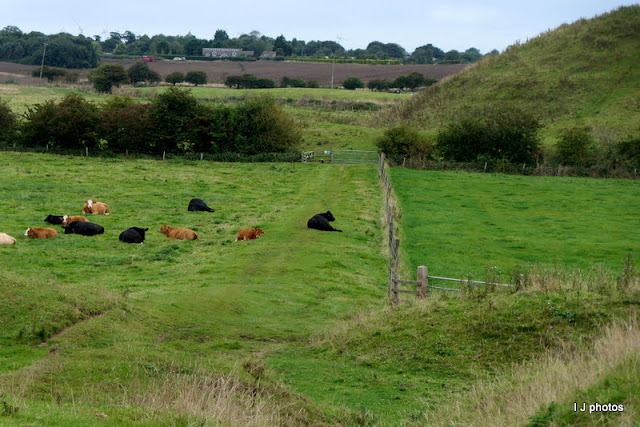 There was nothing to show that this had ever been the site of a castle. We did climb to the top, (blooming hard work for me) and we did make it down (me nearly on my bottom) and we did have to negotiate those cud chewing bullocks again and both of us did agree that really this was a completely wasted effort! 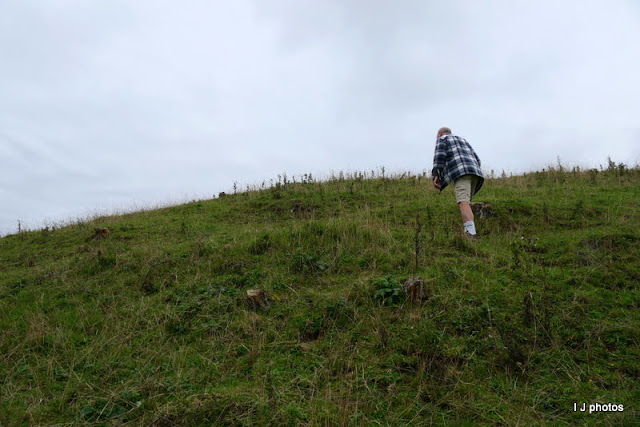 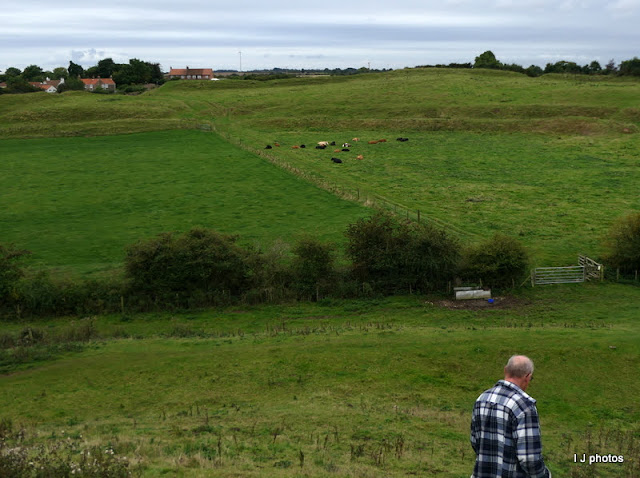 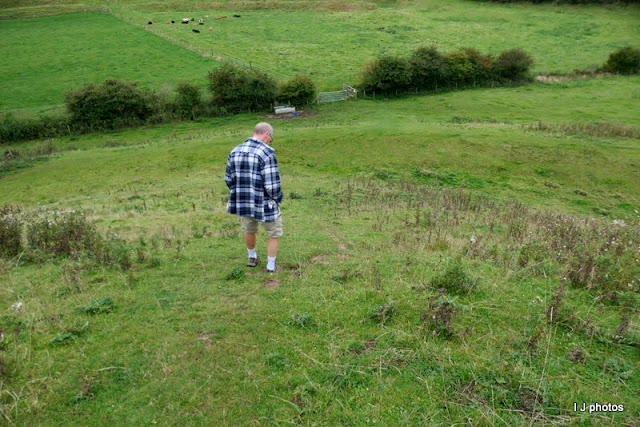 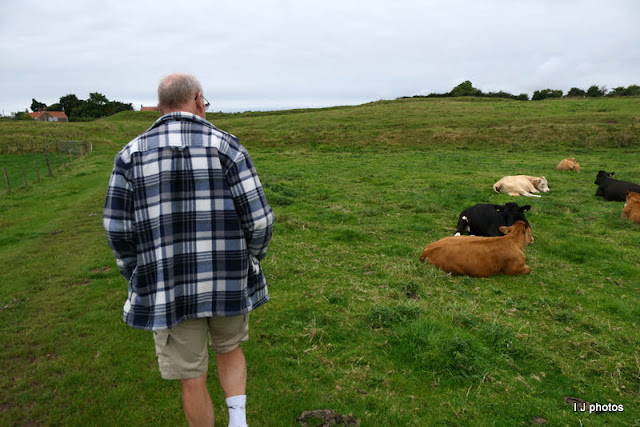 Back at MB and we wondered what to do next. Hornsea was several miles away, right on the sea front and a place we had never been so it was decided. Couldn't believe what we saw on arrival. Waves crashing over the promenade. Had there been a storm out at sea? Was it a particularly high tide? Pretty spectacular all the same and something we enjoyed watching, especially when a very stupid young lady decided to stand next to the wall! 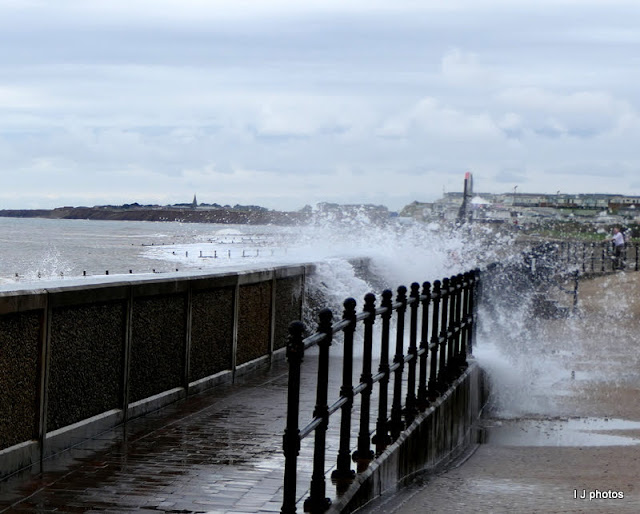 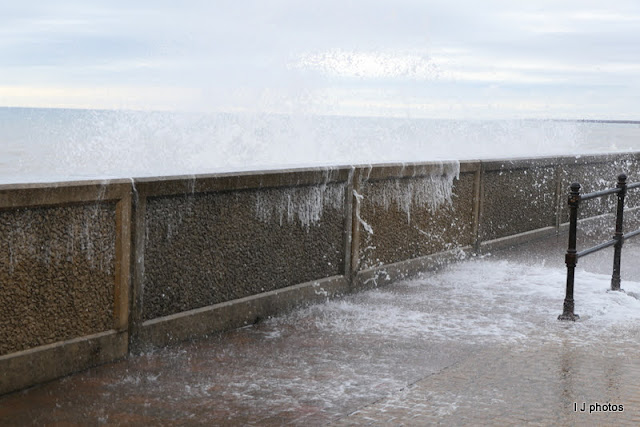 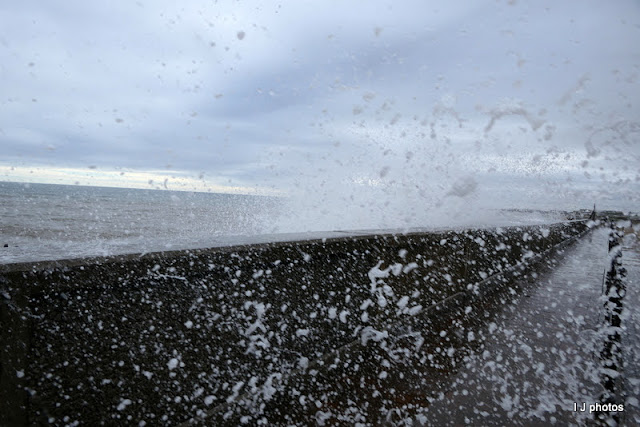 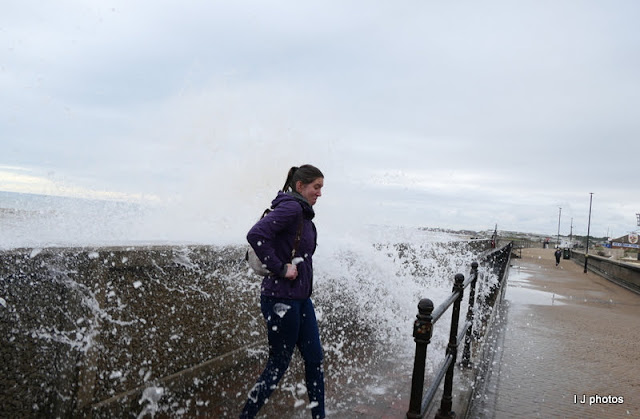 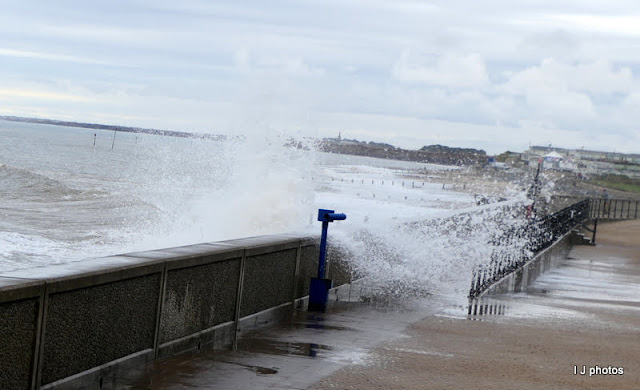 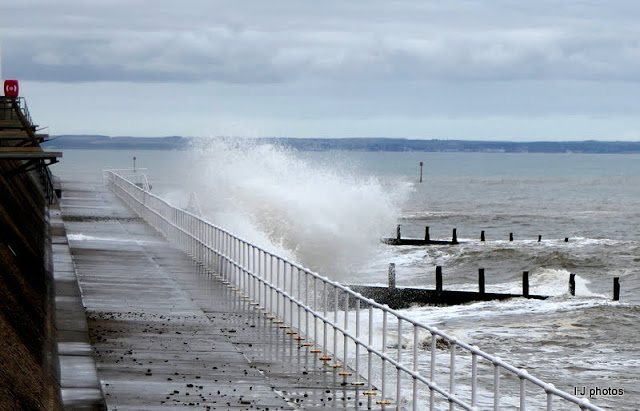 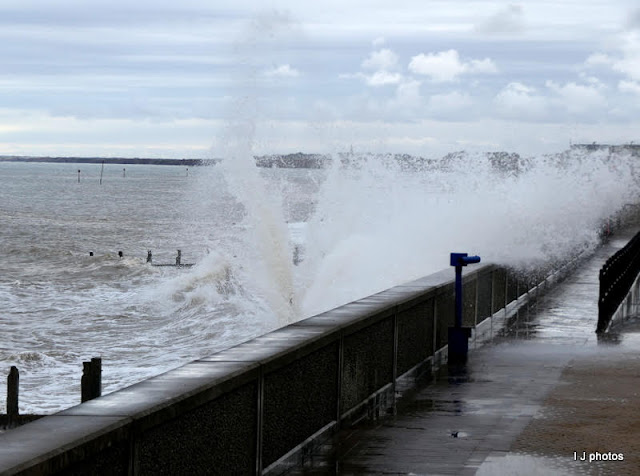 Last night we had stopped at a secluded car park right by the Hornsea disused railway line, at a place called New Ellerby. We had decided on going back there today and getting on the bikes to cycle the 6 miles from the car park, hence the opening sentence. 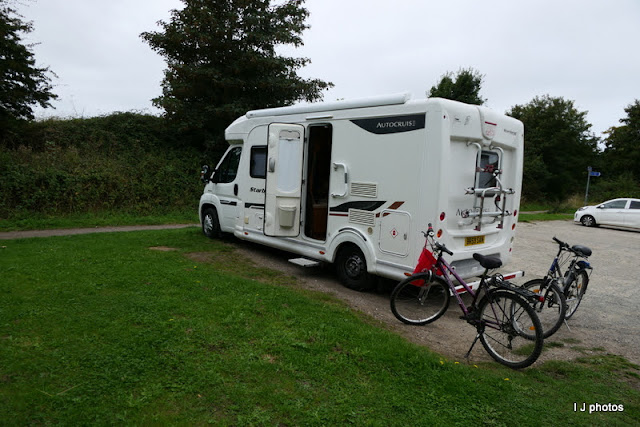 Took roughly 75 minutes to get there but only 55 minutes back. We had both put a spurt on to try and beat the time. No wonder my little legs were crying out enough was enough! 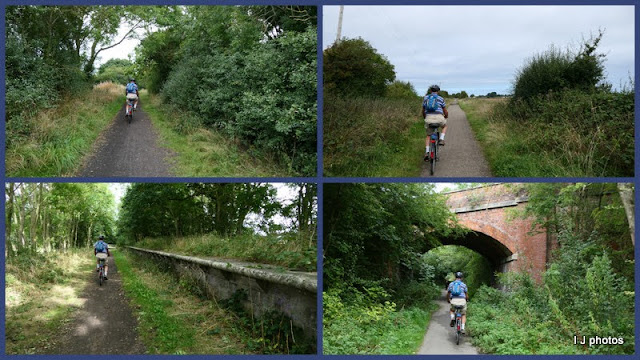 Was I glad to get back to enjoy a hot cup of coffee. Would have loved a bath to sooth the nether regions, but that was never going to happen. Even a shower was out as the water situation was getting a bit critical, also in the loo department. One cassette full and the other heading that way! Into a proper site me thinks, for tomorrow. 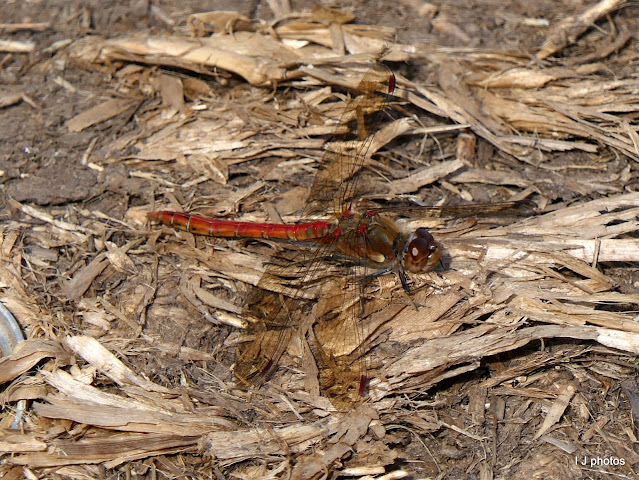 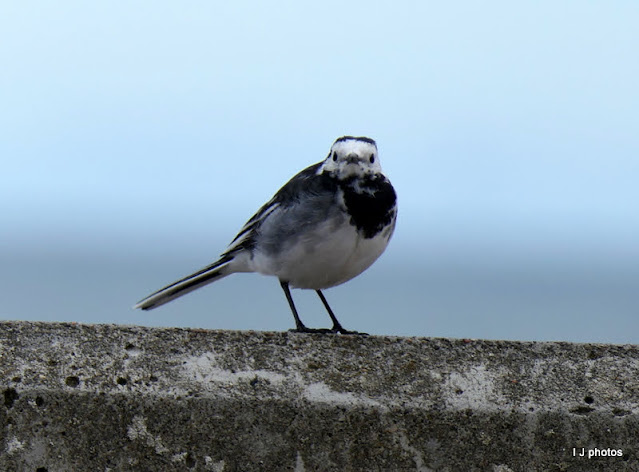 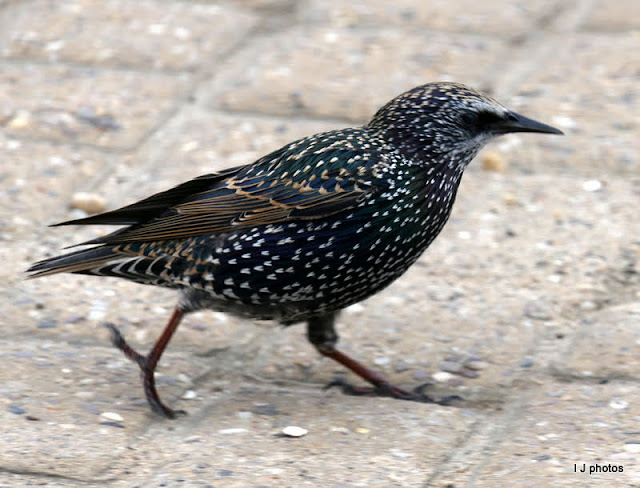 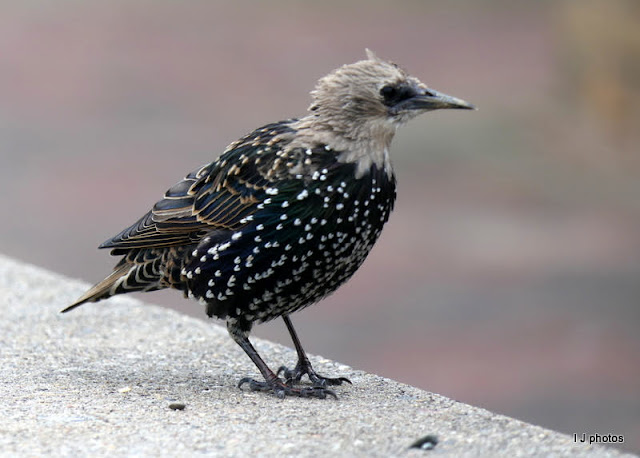 You are just up the road from us. It is Hornsea not Hornsey which I think is London way.

Adjustment of the bike seat and perhaps investment in some bike shorts, Irene!
When Ian has adjusted your seat angle, do check it out for a mile or so before approving it - I adjusted my bike seat once to minimise frontal pressure, and found I was tilted forward too much and it was just as uncomfortable because I felt like I was sliding off - that isn't a pleasant feeling!
Good work on the cycling though - I am about to post about our inaugural ride in the Hawke's Bay on our new e-bikes - a much easier jaunt, I reckon!
Mxx

Thanks, Tony. I stand corrected.

I'll make sure Ian brings his tools with him on our next bike ride just in case a saddle adjustment is needed! Maybe we should start looking into e-bikes but Ian reckons we would need to change the bike carrier as ours would not be strong enough.