NO to the most dangerous road in New Zealand, we ascend the Remarkables and another thrilling jet boat ride.

We left the car park at Kawarau Suspension bridge quite early. No plans at all this morning, it was the afternoon we were looking forward to. So what to do? Ian suggest Skippers Canyon. I looked it up...good grief, this was mentioned as the most dangerous road in New Zealand! No way was Ian taking the Toy along it. Check it out...the photo is terrifying! I took this excerpt from the highlighted website.

The route is dangerous. Not recommended to newbies. In most places the road is too narrow for vehicles to pass each other, there are no guardrails, and the drop-offs leave absolutely no room for error. Should you encounter a car driving the other way, one of you will have to back up gingerly until you can find enough room to pass. Good luck figuring out which of you that will be.

There are many warning signs along the road, winding road, narrow road, gravel road, recommended speed 15 km/h on the next 20 km, danger of sliding, rock fall, steep drops, animals on the road, no safety barriers… crikey who in their right mind would ever drive that road!

Reading that was enough for me to put my foot down, even Ian wouldn't be daft enough to drive that...or would he!

What we did do was to find the road to the Remarkables ski resort. Even that road was for me slightly unnerving. But first we had to get on it. Barriered off, a keypad and payment machine was at the start. Cost for the privilege of driving to the top was $10. We sat for a while deciding if we should bite the bullet and pay the fee. For Ian, it really was no contest. He was all for giving it a go. 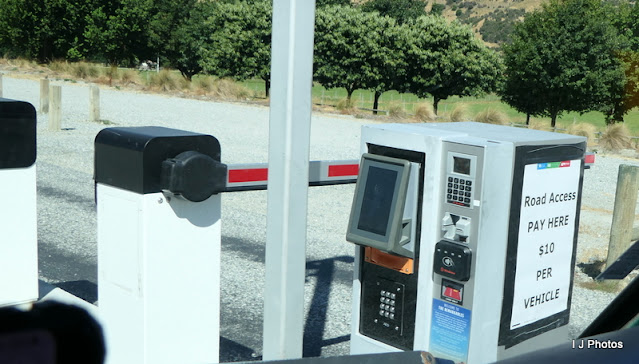 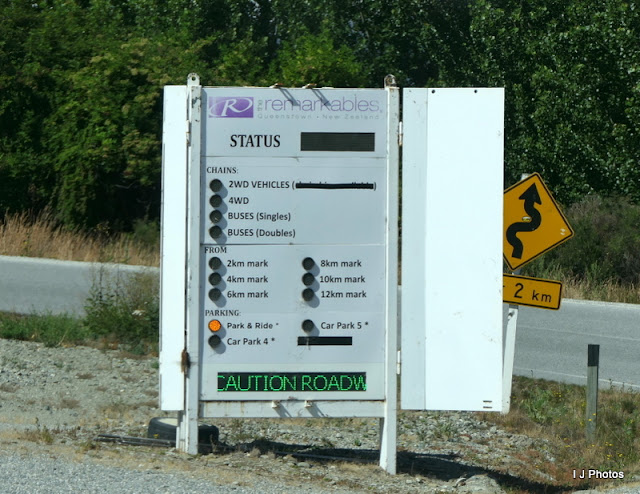 Even though this was another of those windy roads that could make a person with motion sickness throw up, I did sort of enjoy the terrifying aspect of it. Two lane traffic so no issue of single lanes, but it's those sheer drops that make me want to close my eyes and pray! There were safety barriers, still didn't stop me worrying though! 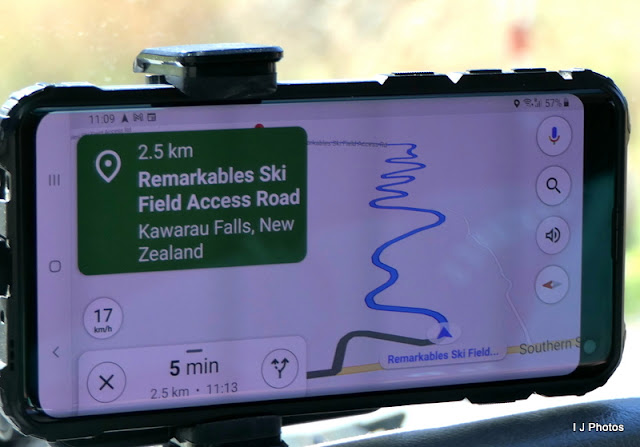 Those views though. OMG so glad we made the effort. Halfway up we were met by a parrot and a duck!. 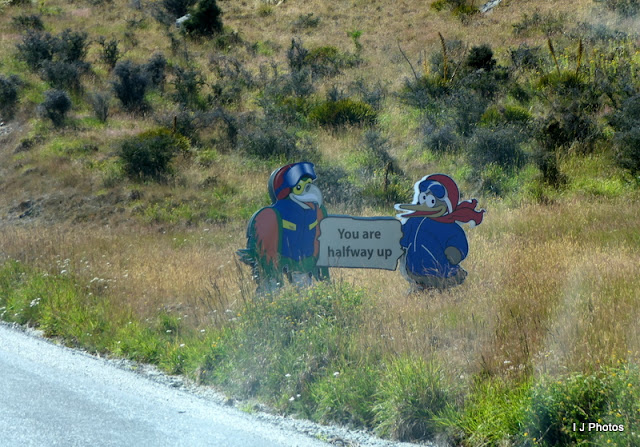 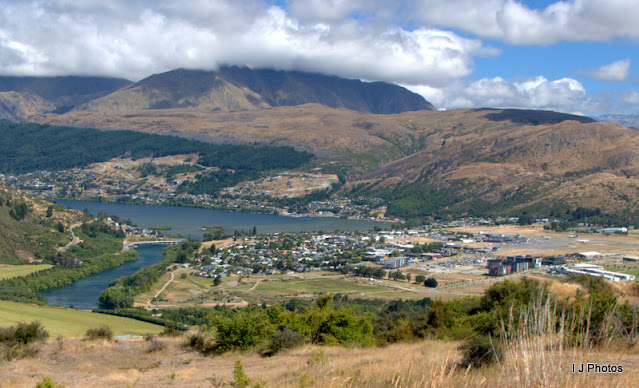 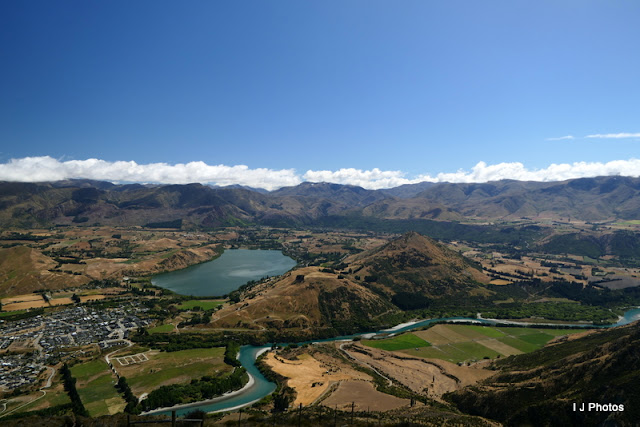 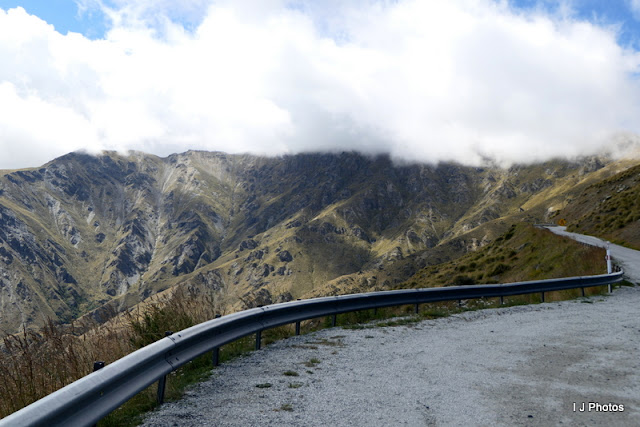 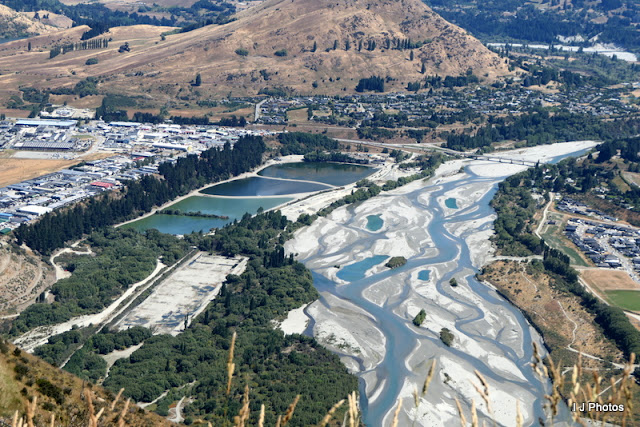 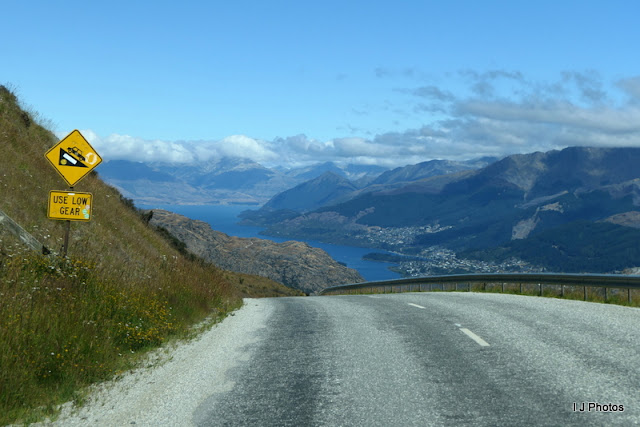 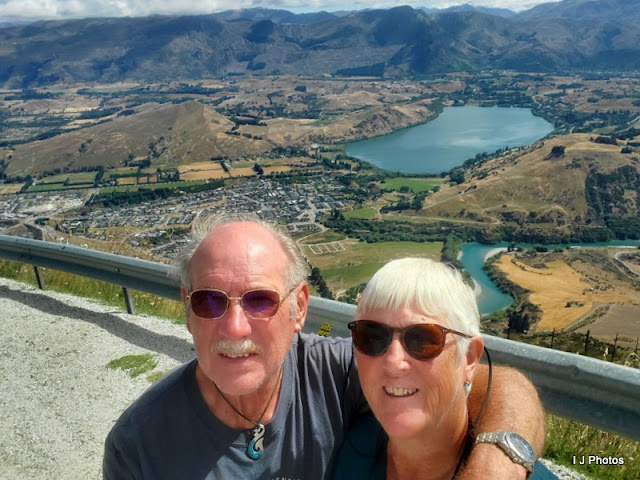 That climb for the Toy, well she struggled a bit. In fact when we stopped to admire the view, I could smell the heat coming from the engine. We never did make it to the ski resort. A further 10 km of gravel road lay before us and time was now of the essence. So we about turned and headed down. 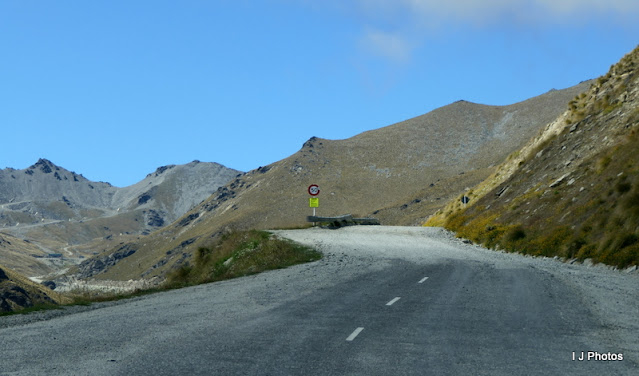 This was marginally better from my prospective because now I was on rock face side. That didn't stop me worrying about the brakes over heating. Ian drove really slowly, let the engine do the braking, a big phew from me when we reached the bottom.

Take a look at the roads. 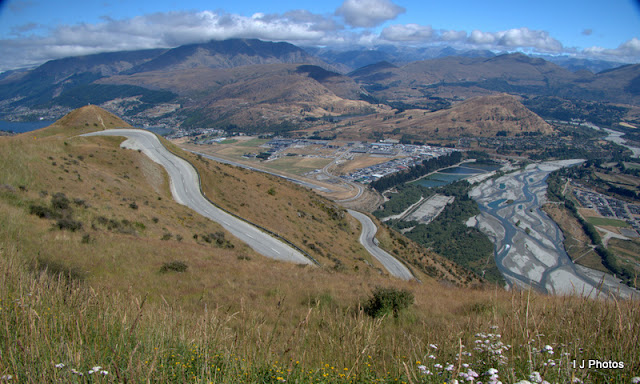 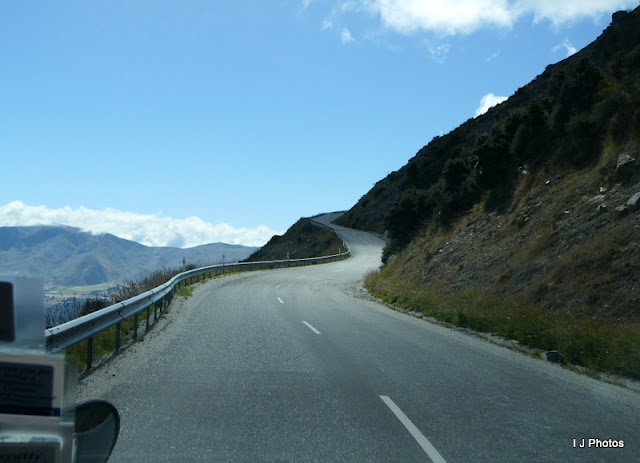 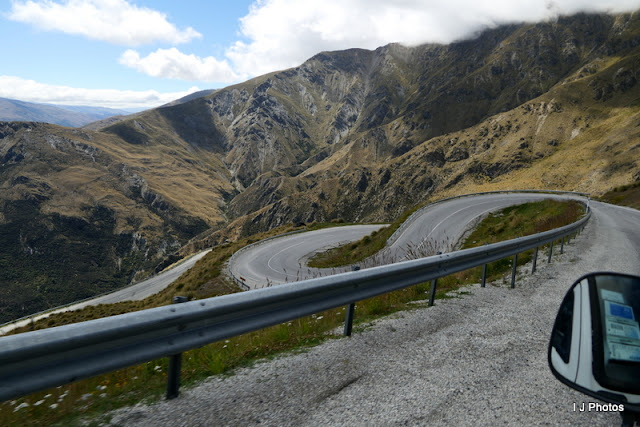 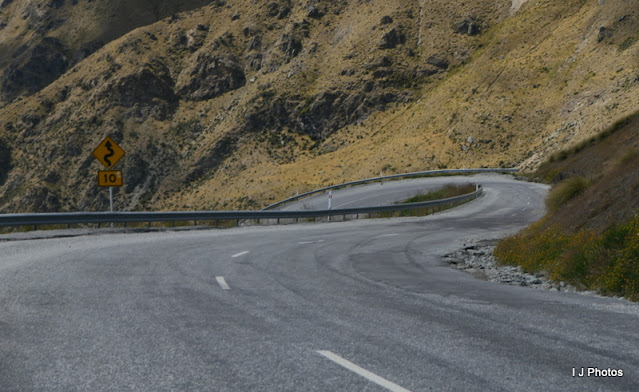 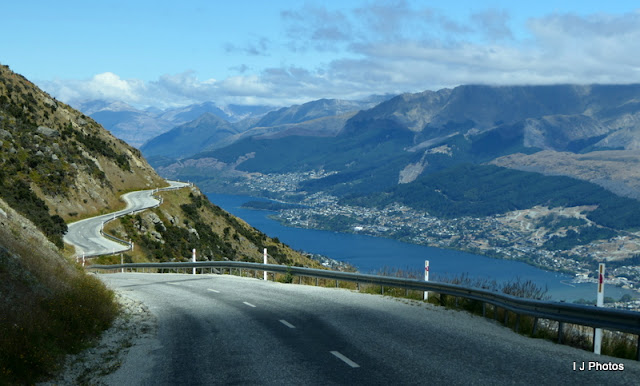 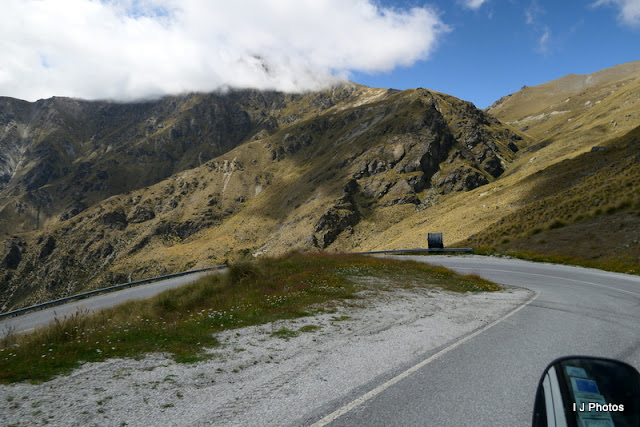 I thought that to be the end of it but Ian found out later that the Lord of the Rings filming took place at a view point right at the top. It looks as if we are to do it all again tomorrow, and along that gravel road too...eek!

Made our way to Arthurs Point and to the Shotover Jet boats. Check in for the 30-minute exhilarating ride of a lifetime was at 2 pm. We were early and had to contend with itchy feet until told to proceed to the boat. Kitted out with life jackets, Ian hired a Go Pro band to record the event, it was around his head which did cause a few problems when the speed got up. It wasn't tight enough and he very nearly lost the lot! A quick adjustment to the strap and all was good.   Of course the inevitable photo by the staff wanting you to depart with your money at the end of the ride. To be viewed on our return and ordered if we wanted. You can see by these photos we succumbed! 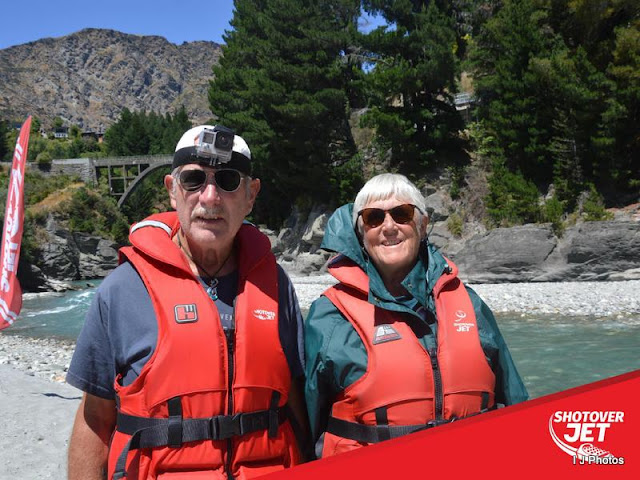 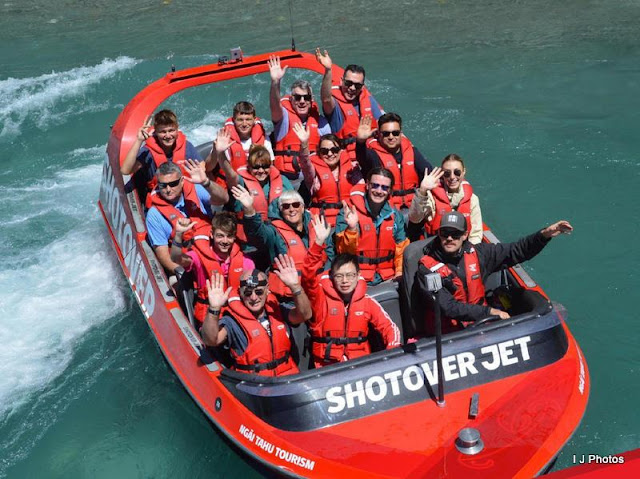 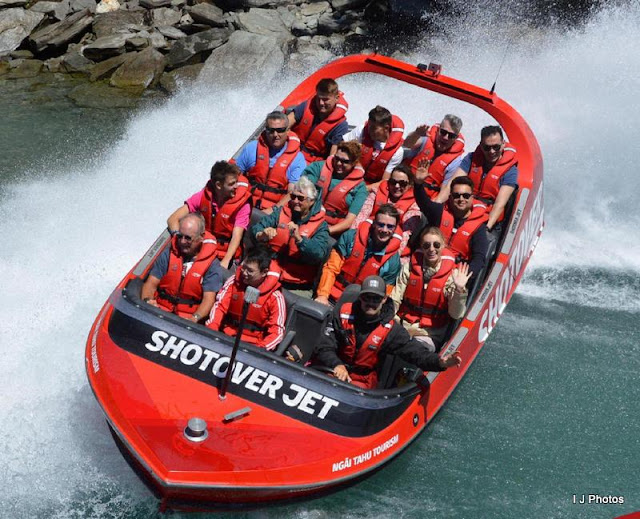 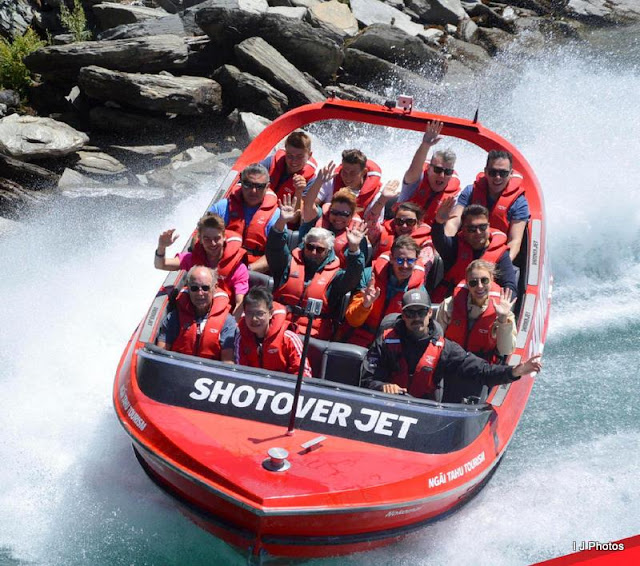 The skill of those drivers are amazing. So near to the rocks, just inches to spare as the tore through the canyon at 80 kph. I counted six 360 degrees turn and yes we both got wet. I enjoyed the Huka Jet on the North Island but for sheer exhilaration this was the daddy of them all.

We have another couple of days here at Queenstown. That Kawarau bridge car park has become our base, and we are far enough away from those toilets not to hear the doors bang!! And added bonus, we get to see more mad people jumping off bridges!

And wildlife (sorry to all my Kiwi readers) this cute bunny appeared to be very used to people. 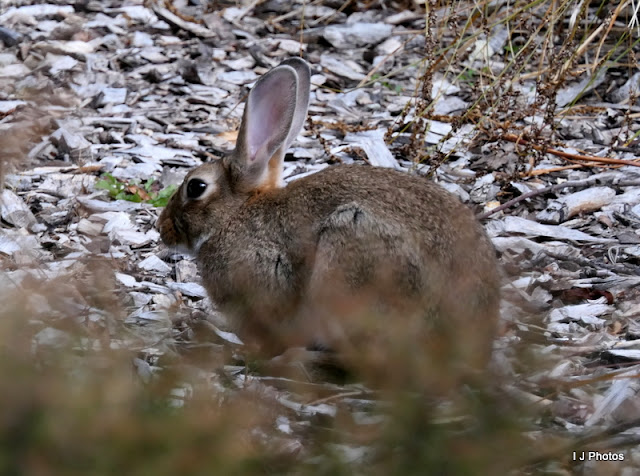 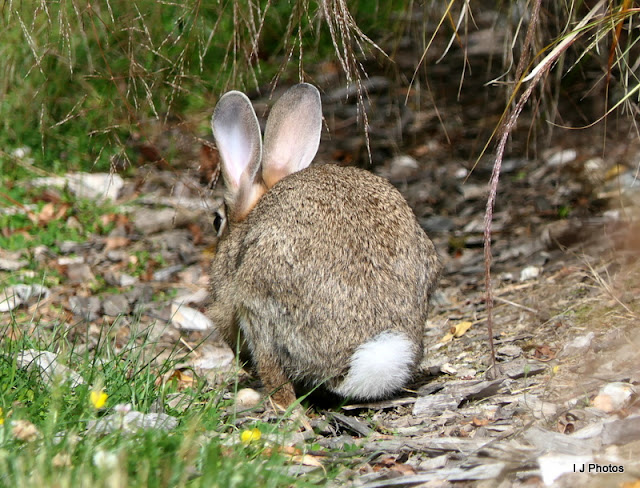 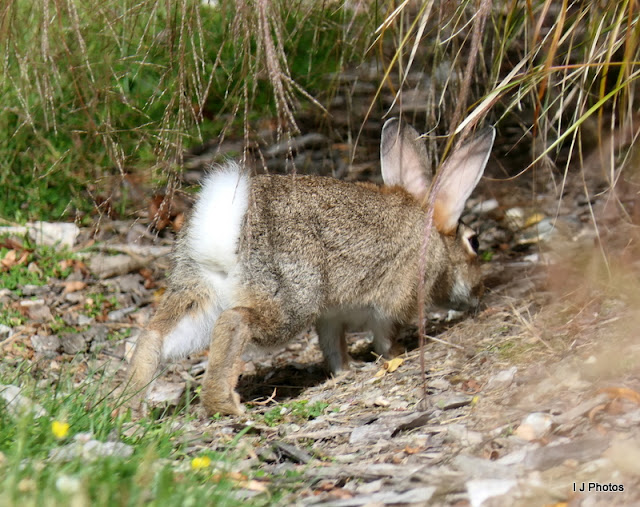 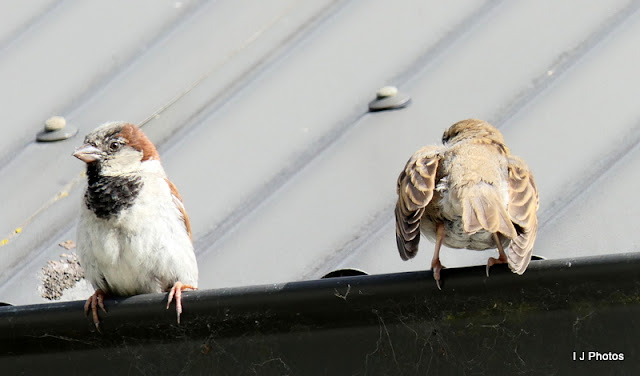 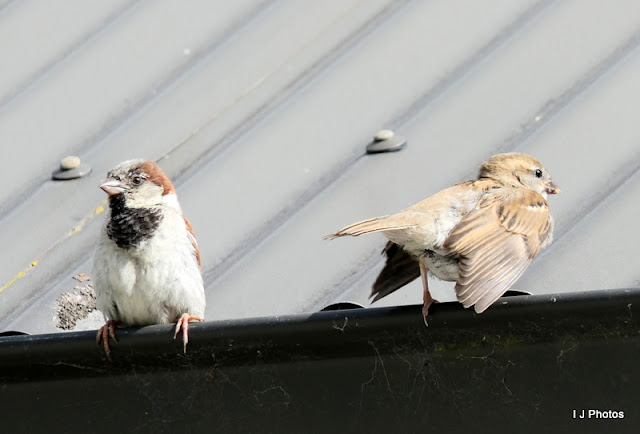 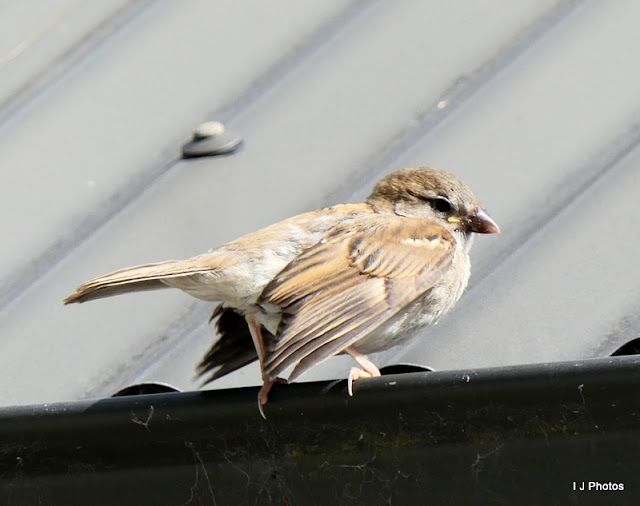 I still remember the rather "interesting" approach into Queenstown airport (in an early model Boeing 737) when I was there in 1996. The runway was appreciably shorter than it is now, which made for a firm touchdown and maximum braking! It's one of those places where commercial pilots have to be checked out by an experienced colleague before they can do it on their own. The following day I took a flight to Milford Sound & back in a twin engined light aircraft, which was another experience altogether...

Irene you and Ian have to travel Skippers Canyon Road. We did it in 1984 and the front bumper was torn off the car when we hit a deep rut. You must go down the road as we want our bumper retrieved. I'm sure the bumper will fit in the back of the Toy

Absolutely not Tom! Sorry but that bumper which I expect is now part of the landscape will be staying where it is! (:

Actually the trick with the Skippers Road is to get there early in the morning when everybody is going in and leave in the afternoon when they are going out. Another trick we used was to follow one of the Tourist Buses in and out because everybody gave way to them and if you were close enough behind the bus it is just a case of following through.