The dangers of Carbon Monoxide poisoning.

Considering we usually twiddle our thumbs and wonder what to do whilst back at the Mill, it's been quite a busy time. Back to doing work parties on a Friday, my job, not the most pleasant, was cleaning the facilities block consisting of the loo and elsan! The loo wasn't too bad thanks to Barbara, another of the ECP&DA members who made sure the loo was clean and toilet rolls replaced, but the first thing that greeted me when opening the door was the amount of books, DVD's magazines and the blooming great box of religious pamphlets that had been left on the floor and shelves. On busy stretches of canals this is a great way to recycle books but here on the Erewash so few boats make it up that they become a nuisance. All went into the skip! Then in flushing the loo a mini waterfall occurred when the water in the bowl overflowed the rim! Yep it was blocked! Good job CRT didn't need to get involved (the society looks after the block for them) 'cos they haven't the best record of prompt action dealing with these sort of situations.  It was Dave our work party organisers that had the pleasure of that job! 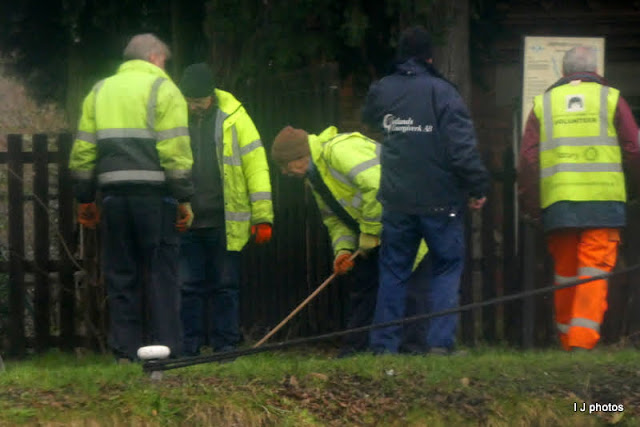 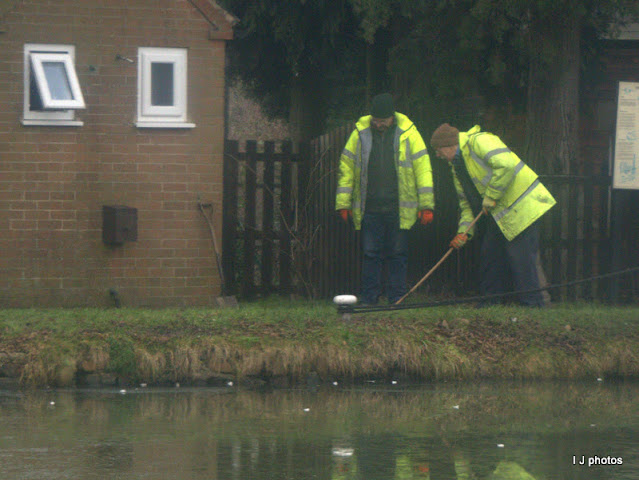 Convinced the problem was the paper towels being used as loo paper, it turns out the sewage pipe had a slight crack, just enough to allow roots from the neighbouring conifer to cause the blockage. 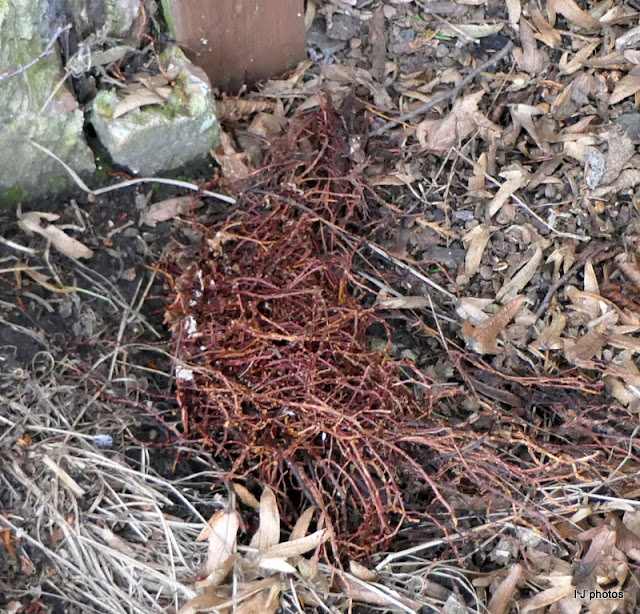 Over several nights the temperature had been below freezing. Consequently, the canal froze, and the swans had a hell of a job getting around. 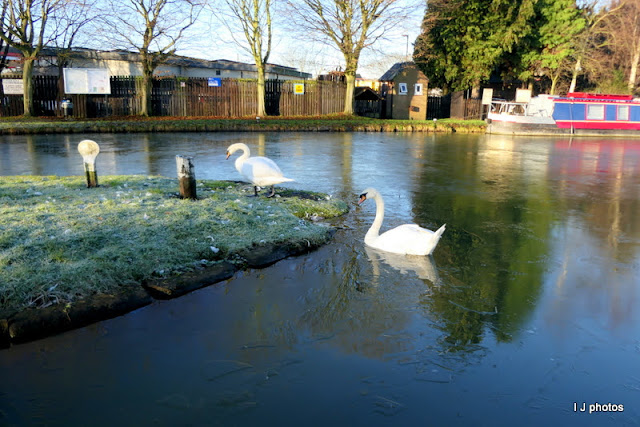 The boat was also cold! Banking the stove up with coal and opening the vents to get it roaring didn't seem to help because an icy draft was coming from the back. The wind was blowing through the gap in the engine room door so to resolve that, a towel and my scarf was used to block the gap under and above the door. When our CO2 alarm went off they were immediately removed! We had a blow back down the chimney and only by placing the tall chimney over the smaller one and putting on the cowl was that issue solved. 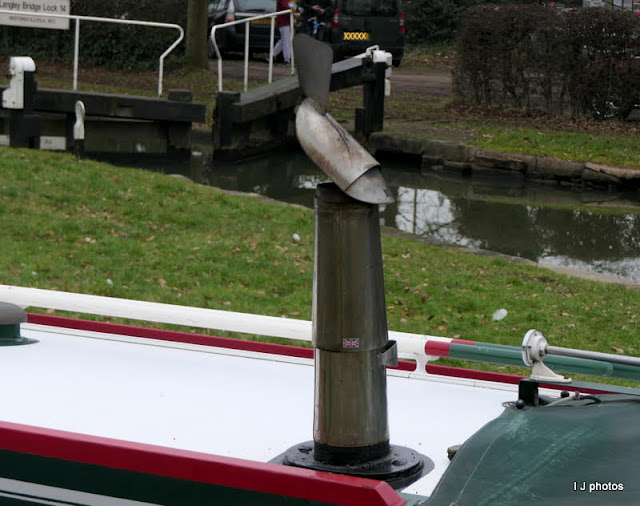 I'm only mentioning this because on our return to the Mill, a small cruiser was seen on the offside at anchor bridge. Police tape surrounded it and it turns out the owner with his small dog both died of carbon monoxide poisoning. Moral to this story, to suffer a bit of cold is better than being found dead!

Today we went to see what progress had been made at the lock landing wall repair, Long Eaton. 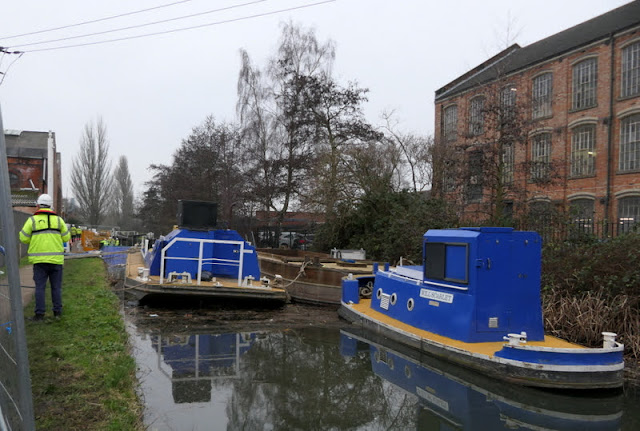 Obviously the towpath was blocked off but after explaining we were from the canal society and wanted pictures for the magazine, the very nice site manager Adam, although not allowing us onto the workplace, took these photos with my camera. Most impressed because he got down into the lock showing a much better prospective than I could ever have achieved by standing on the side. So a big thank you to CRT for being so obliging. 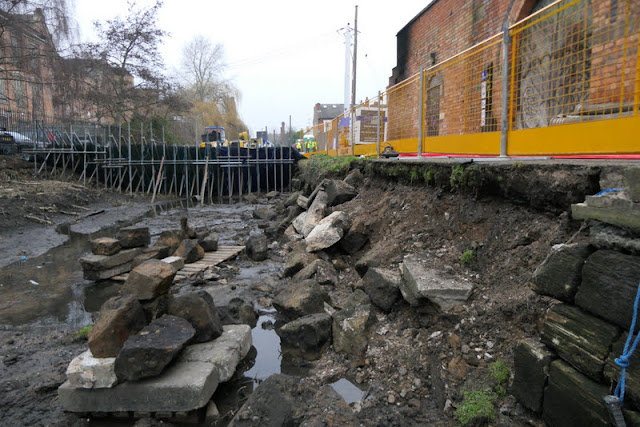 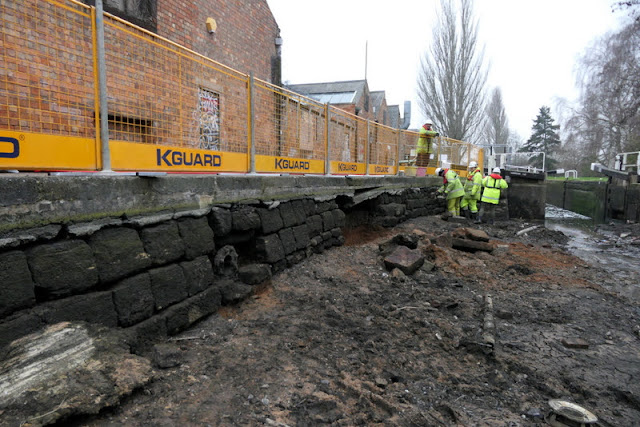 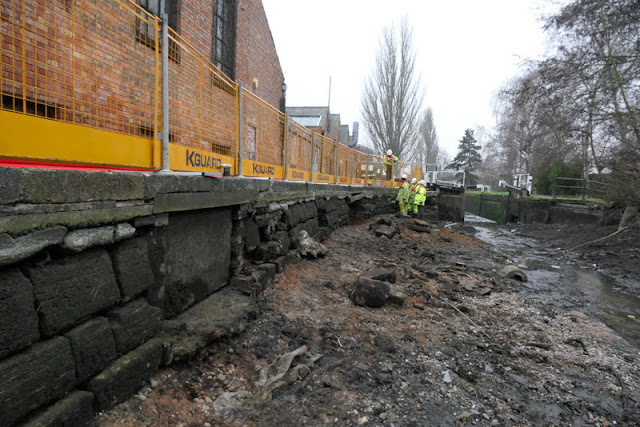 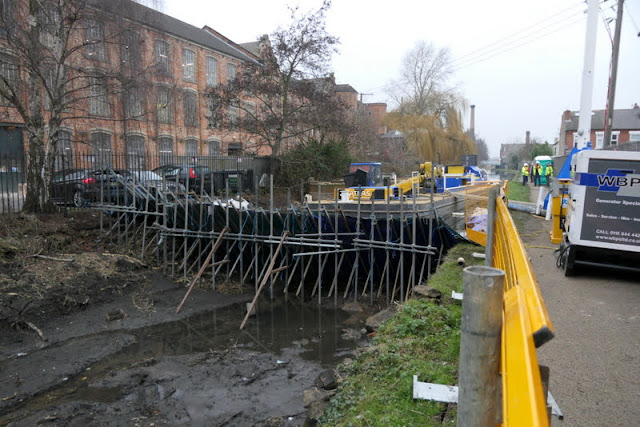 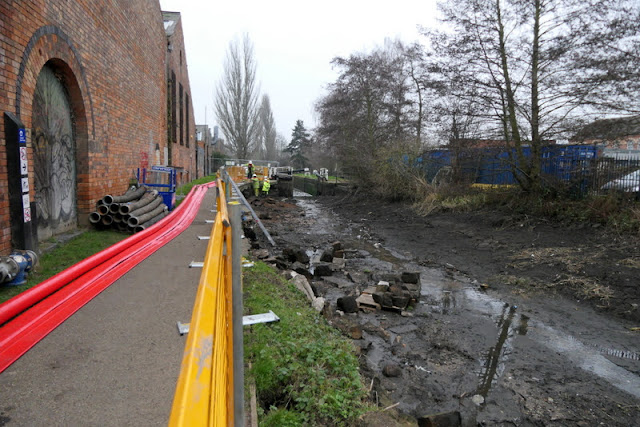 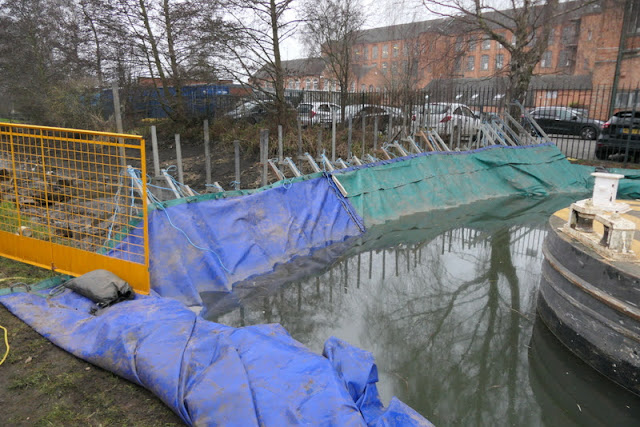 Oh and remember that boat moored on the landing? It was still there when CRT came onto the site. 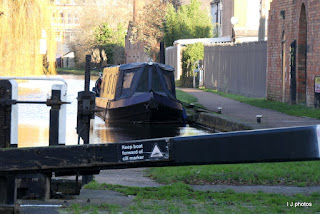 All attempts to find the owner failed, although neighbours did mention it was left there on a regular basis! In the end, main office granted permission for Adam to remove it to below lock! As yet the owner has not returned!

CRT has also been busy here at the Mill. Holes in the tarmac leading from the swing bridge to the boatyard appeared probably due to the ice and frost getting into cracks and lifting the surface. But, and this is where sometimes we all shake our heads in despair, they arrived with not enough tarmac to finish the job and the biggest hole of the lot by the bridge, wasn't even on their worksheet! Now another visit is needed to rectify the mistake! 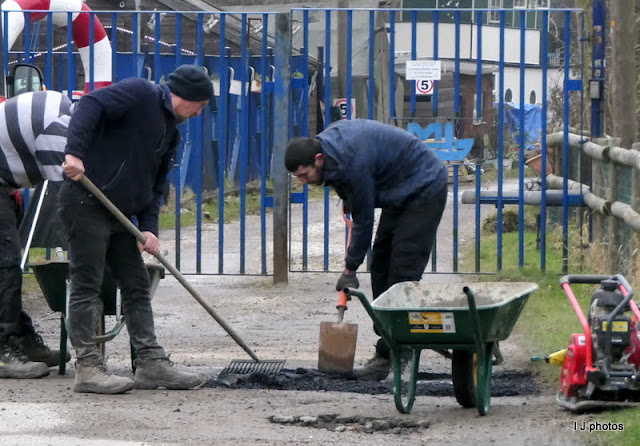 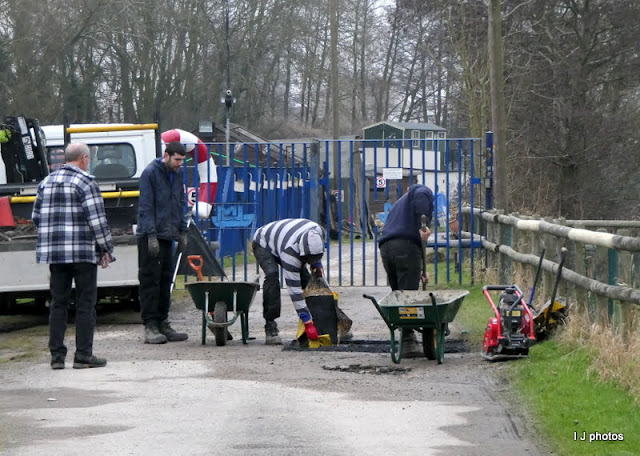 And this after just one had been dealt with. 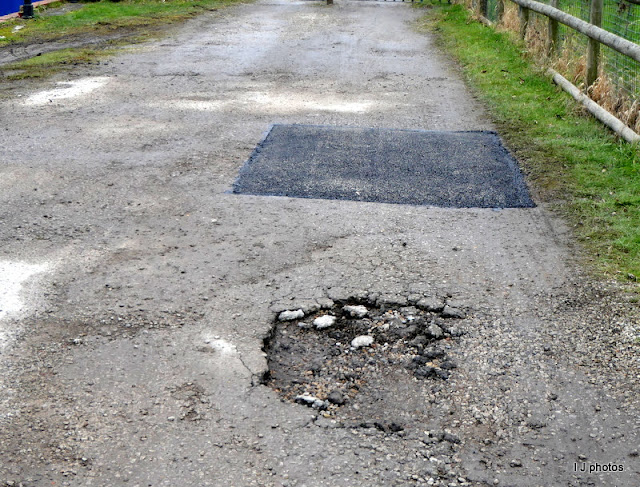 Next week both of us attend the first of many rally meetings. One to put in your diary for May 2023 as it will be the 50th year of the reopening of the Great Northern Basin and the 55th Anniversary of the formation of ECP&DA. We are there purely in an advisory capacity having already helped organise and been involved in 2 previous rallies, Ian as site electrician and harbourmaster and me as the trade boat's coordinator, planning the dog show and organising the quiz.

And finally, the swans are already thinking of the next brood as quite a bit of rumpy pumpy was seen. 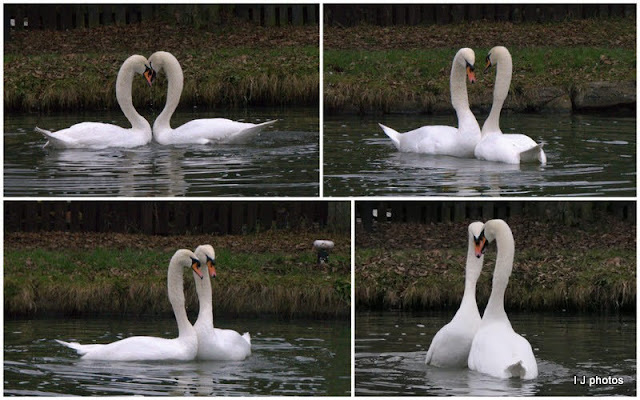 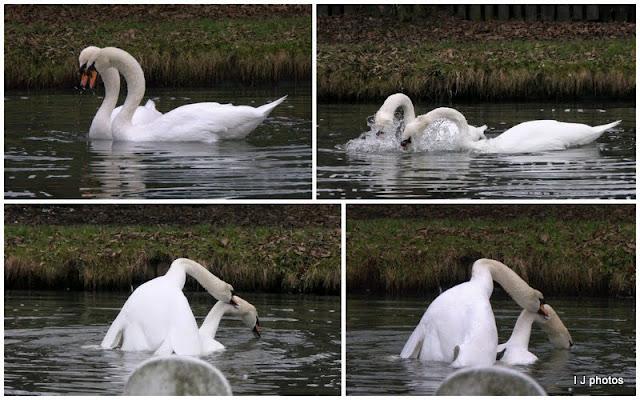 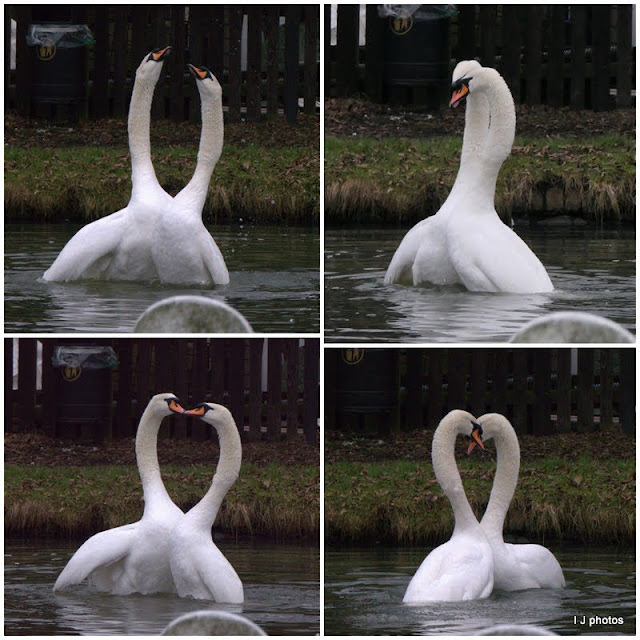 And on the feeder, Long tailed tits. 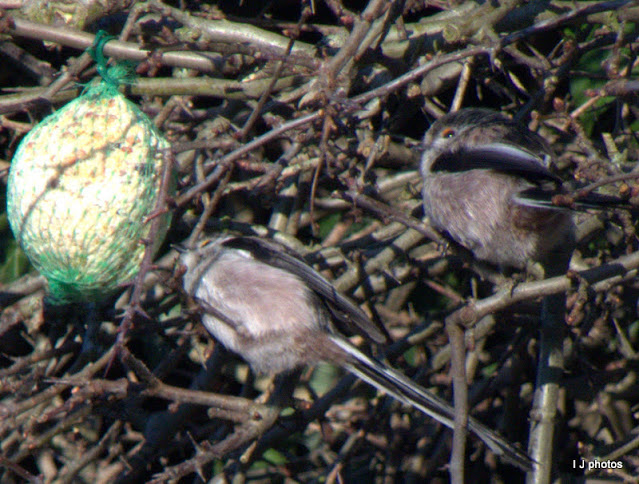 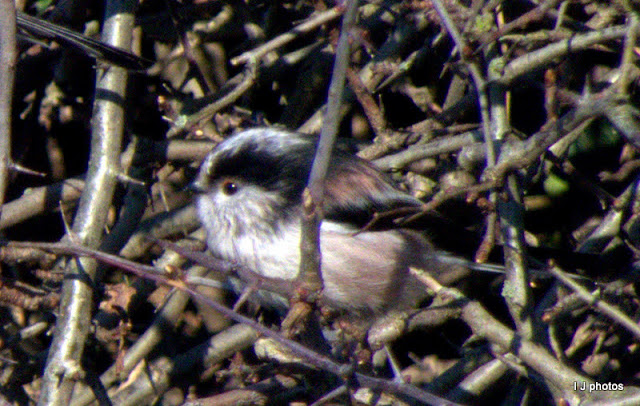 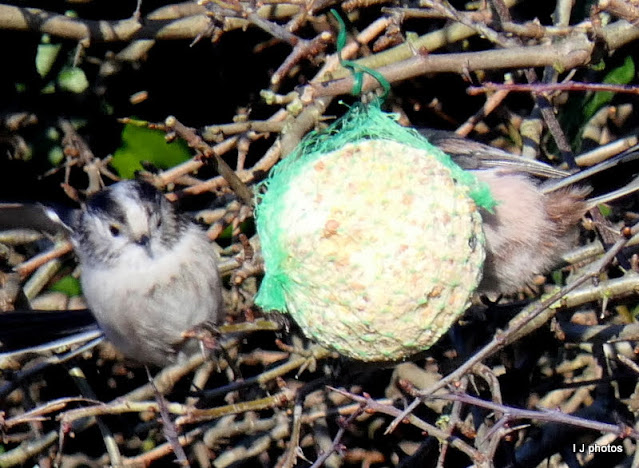 Posted by Ian and Irene Jameison at 4:30 pm

Gosh, you are always busy, interesting to see what the drained lock was like.
Thos HUGE stones must have taken some manoevering into place when it was built!
Love the little Long Tailed Tits, they are so quick they usually elude my camera, well done you.
Ann Makemson xx

Good to see you are still bobbing about.