We make a break and a drama at Lime Kiln Lock

6.30am and listening for the sound of rain. None had been heard overnight but was there any this morning? Nop couldn't hear a thing. So the forecasted heavy rain for the wee hours hadn't materialised then. Donning jogging bottoms and jumper over my PJ's I walked to check the level gauge. And then...Oh no....Not still in the red!!!! But hang on. I could now see more of the brickwork showing in the lock. The river must have dropped by a further 3"....'Ian, get you backside in gear, we're going'! 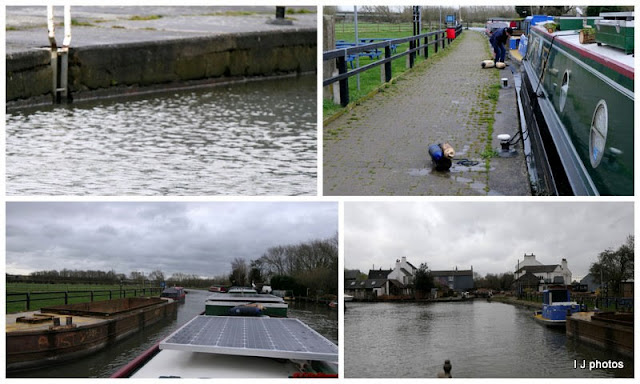 Sileby footbridge and that left-hand bend were not as traumatic as I had worried about. Ian was helming and took FS through and round as sweet as you like. But he could not get FS onto the lock landing! The swirl of the water in the weir stream was just too strong so all he could do was nudge the boat up to the lock gates deciding it was best he stayed on to control FS whilst I jumped off to set the lock. We did notice the gauge was in the amber and well into it not just by a smidgen! So again I ask myself, what is it with the gauge at Mountsorrel lock?? 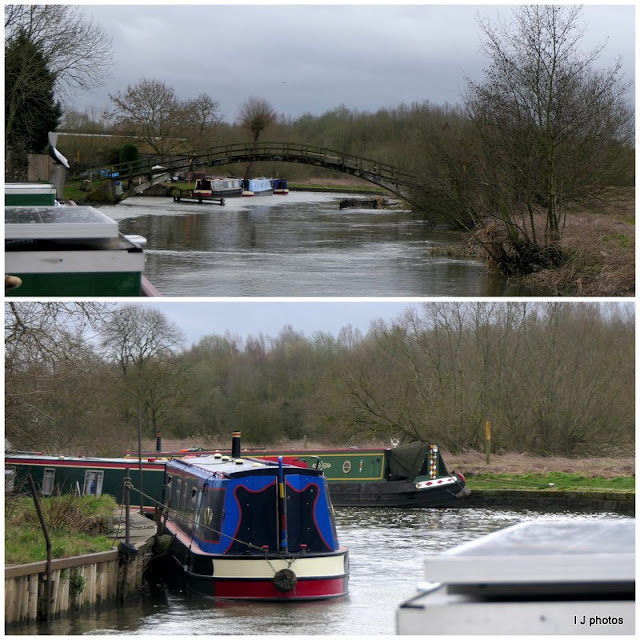 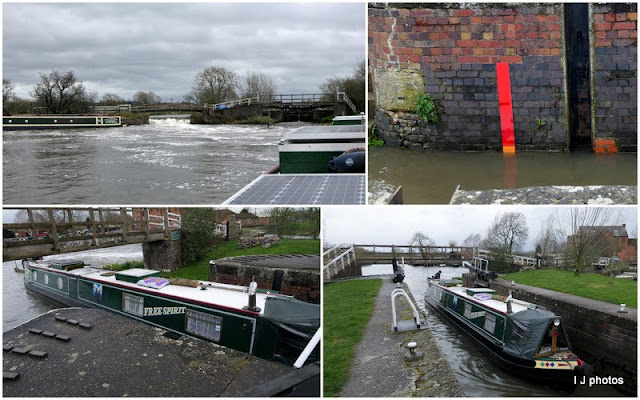 The wind started to pick up on the way to Cossington Lock and it was here we noticed the gauge board! In the red, no amber showing and this was exactly the same when also arriving at Junction lock.  Rightly or wrongly we ignored the warning and continued on our way. It wasn't the flow that was the problem but those wind gusts. Stronger and stronger they got until by the time we managed to get to Leicester it was almost impossible to manoeuvre. But hey ho, I'm getting ahead of myself.

So Cossington lock entrance was full of rubbish. Ian got the bottom gates open but trying to get them to close properly once FS was in, well forget it! Took over 5 minutes of me with the pole pushing those wooden posts which insisted on getting jammed between the gates. Anyway, we got there in the end. 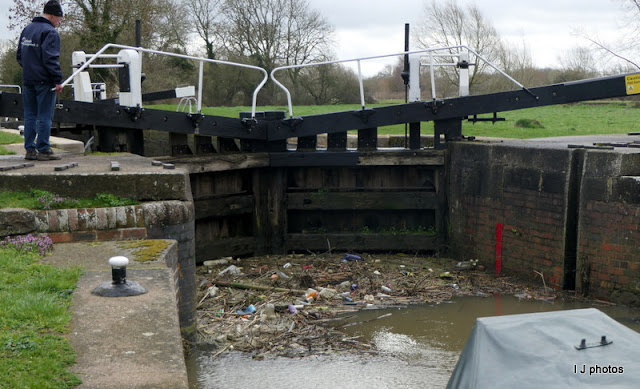 At Thurmaston lock, the gauge was in amber. Good news at last, no more worry about the flow. I had a real problem at the top to pick Ian up though. The wind kept pushing the boat toward the weir stream and Ian, realising my predicament only managed to shut the gate halfway before running toward FS's stern and jumping on board. Unfortunately, the wind opened that gate, blast I thought but no way could we go back. And then in the distance coming into view was a small narrowboat. Racing along with the current I didn't feel quite so bad about the gate being wide open. It gave the chap an easy way in without having to stop and tie to the bollards. How he would have done that on his own is anyone's guess.

Two and a half miles further and with Birstall lock done, into view came the National Space Centre. Hard to miss this building with its unique shape. A huge weir is off to the right, a playground for the canoeists so it seems. It was at this lock (Belgrave) that trying to equalise the water was difficult. All top gate paddles had to be left up and a mighty heave on the lock beam was necessary before the gate could be opened. It's never a wonder it couldn't be equalised with the massive gap between those gates. 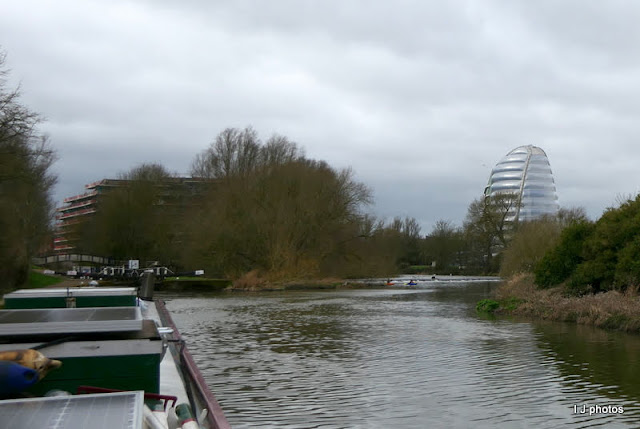 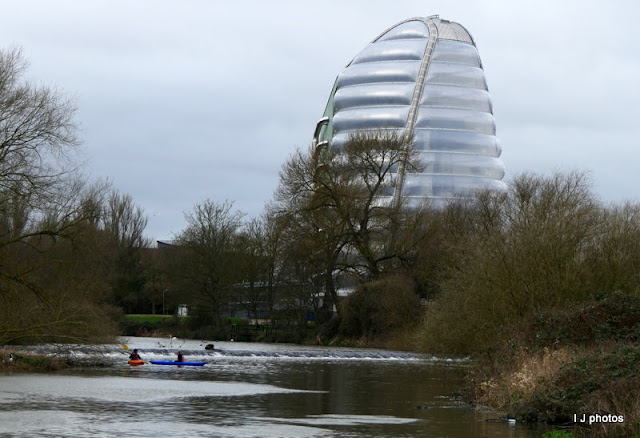 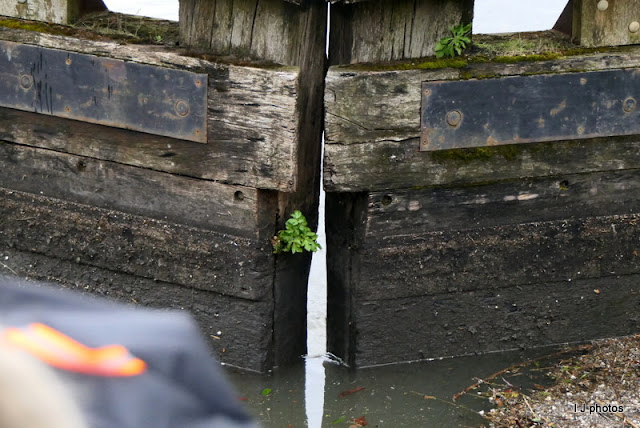 The nearer we got to Leicester the more crap had to be pulled out from behind the gates. Huge crates, pallets, logs, buckets you name it there they lay before us. Best of all, and a great find if your into that sort of thing, was a Tree Cutting sign. It was also at this lock, Lime Kiln, that a horrible drama unfolded before us of which Ian had to step in to do a rescue. 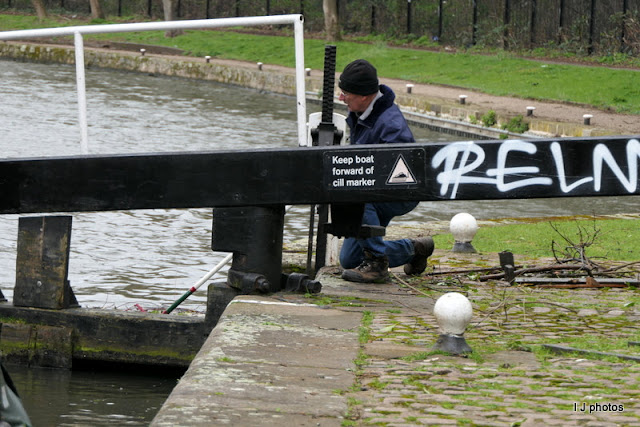 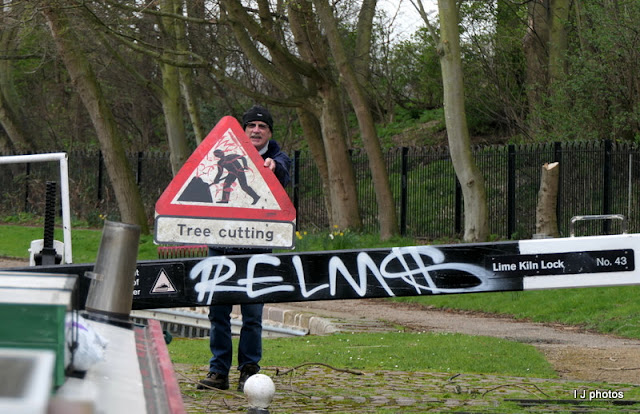 A massive commotion came from below the lock. FS had by now ascended so stepping off the stern deck I go for a look and see what I initially thought, were mating swans...God did I get that wrong! Swans are very aggressive especially to their own kind when they feel their territory is in threat. This was real fisticuffs and there was no doubt that death to one of them was imminent. I watched helplessly as time and again the weaker and presumably younger swan was being drowned. It managed to make a break for it and try to climb the bank. The aggressive swan got hold of his neck and refused to let go. Ian on the lock offside could stand it no longer and rushed toward them for a rescue. Grabbing the weaker swans neck he managed to pull the youngster away making the larger Cob release its grip. There it lay completely exhausted. Ian stayed to make sure it recovered and sure enough before long it was on its feet and made a hasty retreat toward the upper river. 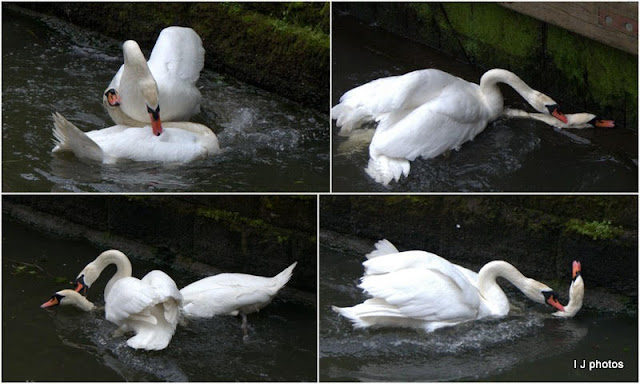 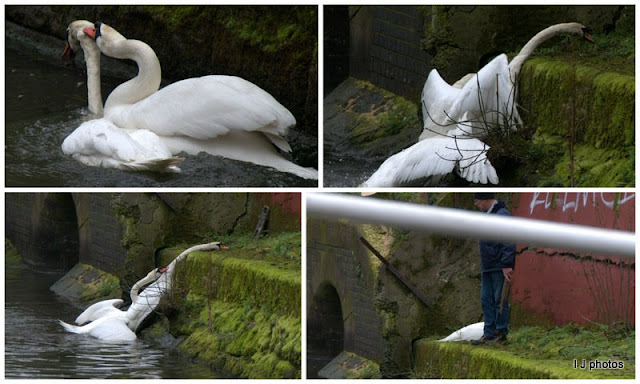 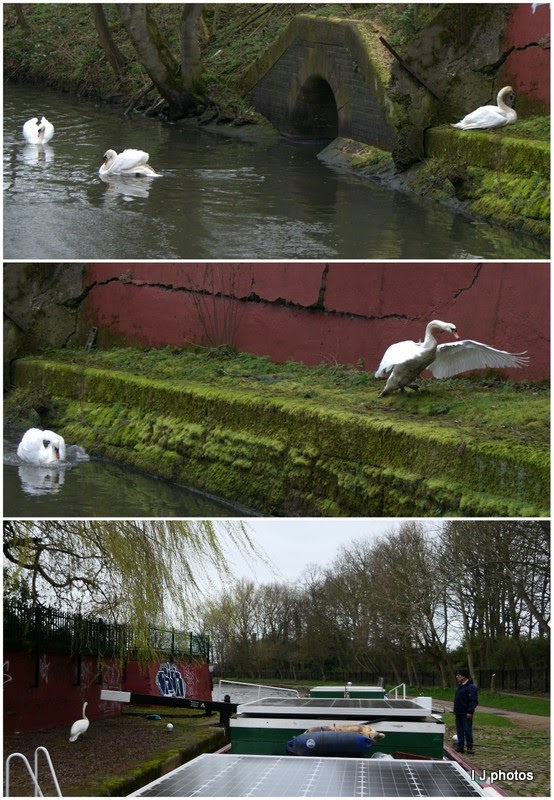 I know that if we hadn't been there this swan would have died. Should we have intervened? Many will say that we should leave well alone and what will be will be, its the law of the wild.  I will let you decide if this was a good deed or not.

Now I'm not a big fan of murals (unless done by Banksy) but I must say there are some very talented youths out there. These on the approach and exit to North Lock, Frog Island. 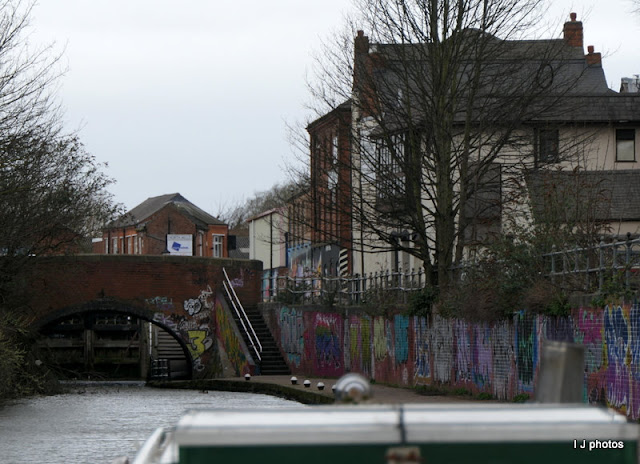 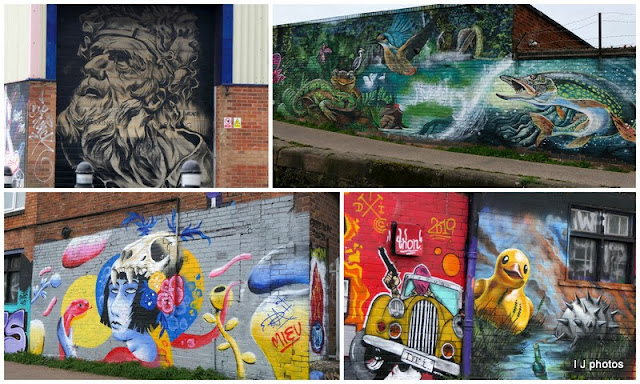 As I said in the third paragraph the wind was a real issue. Never more so as when we tried to get alongside Friars Mill secure pontoon mooring. I got FS as near to the pontoon as possible, Ian jumped off with centre rope and I managed to drive the stern in. Then the battle began. I got the stern rope wrapped tightly around the cleat and releasing a little at a time when Ian asked for more manoeuvrability trying to bring her alongside. His method was to pull some slack rope, wrap it around the cleat quickly and repeat the procedure time and time again. In this way slowly FS came in. I then hung onto the centre rope while Ian grabbed the bow rope, secured that and finally we could breathe a sigh of relief. 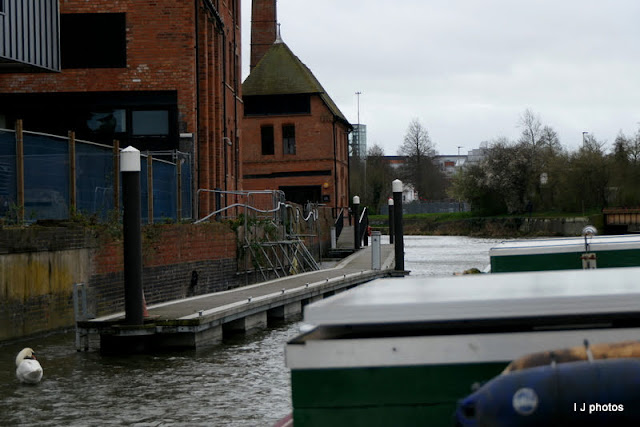 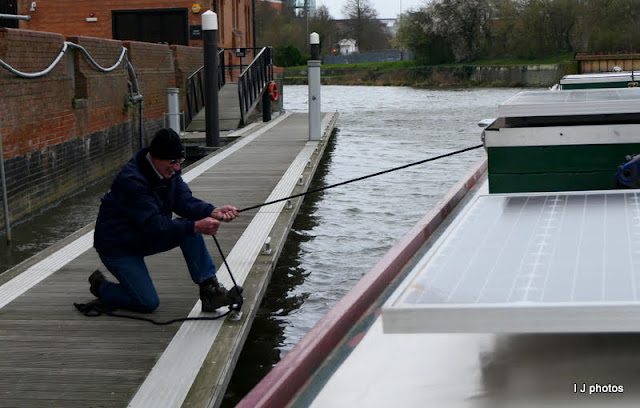 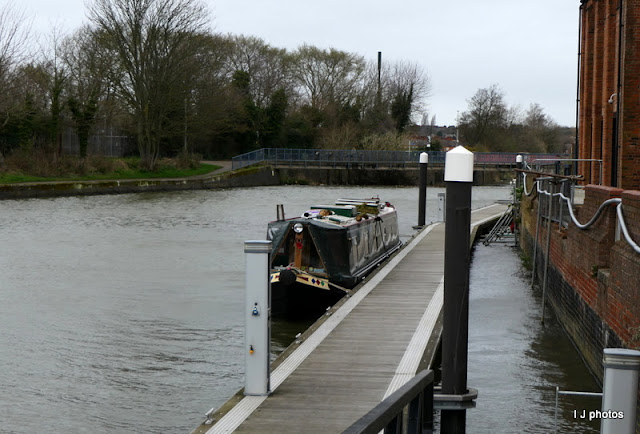 With water on site, we topped up the tank, had very welcoming showers (not had one for 5 days making do with flannel washes instead) battened down the hatches and sat and watched the Rugby. Ian has worked out that we could still make Warwick if nothing else goes wrong. It means long days but after the long spell of inactivity, we are well up for that. The wind at the moment is gusting at above 30mph 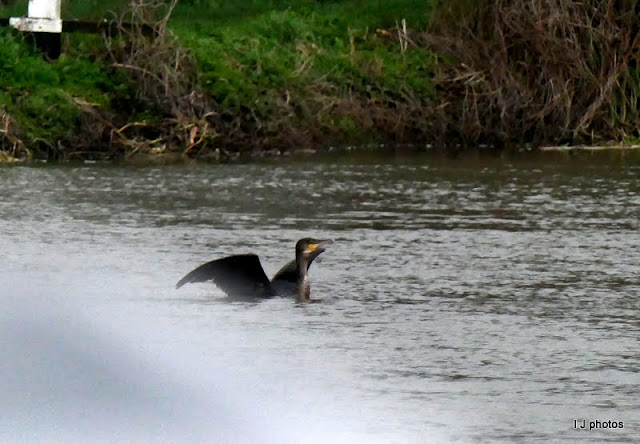 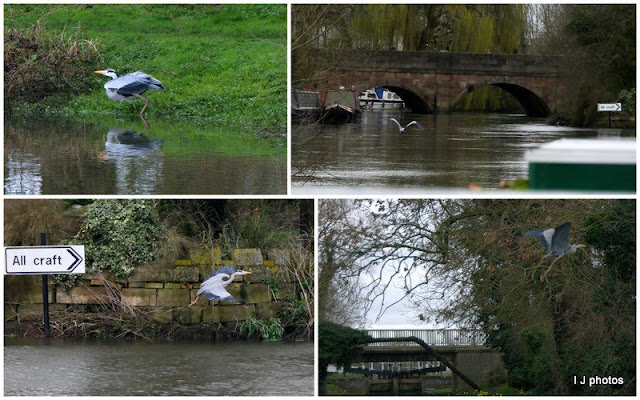 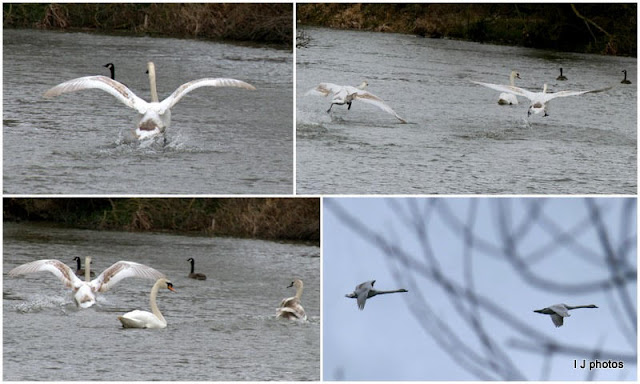 I am glad to see you have managed to escape and well done to Ian on his rescue.

The gauge at Montsorrel is below the lock - as the river rises the headroom under the bridge is reduced. That is why the red board there appears to be set lower than elsewhere. Likewise the one at Belgrave lock as the headroom under Thurcaston Road bridge isrestricted. Nice to see a photo of our boat - Tyto Alba- moored below Sileby lock in your blog.
All the best
RichardThorpe

Thank you, Richard, all is clear now. Xx