We had not long returned to our boat this morning when there was a knock on the window and who should be standing there large as life, Steve Cropper. He came to thank me personally for the information on the Camo boat. Anything that can help with getting this boat from the canals was very welcome to BW and as the Police as been very aware of the situation for a long time now, Steve feels sure its only a matter of time before the men on board can be dealt with.

I mentioned that on Wednesday night we would be staying with our son in Milton Keynes and I sort of wondered where we would be sleeping. If anything it was worse then we imagined, as on entering his house we were greeted by steel poles and scaffolding planks holding up the ceiling in his hall. The heating was on but all the heat was being lost through the gap in the living room window so it was freezing. All the furniture had been covered so there was nowhere for us to sit other then the chairs in the kitchen. Going upstairs to check on the sleeping arrangements I found to my horror that the only room that had any space and actually contained a bed was in Colin's bedroom. The spare room was a building site and the children's rooms were piled high with furniture. While I was upstairs I thought I would use the loo in his bathroom. Imagine the shock when I opened the door to find that full of furniture as well!!  Thank goodness he has a downstairs toilet!!! In the end it turned out okay as Colin managed to find Oscars mattress from somewhere amongst the pile of furniture in Oliver's room and laid it on the landing upstairs for him to sleep on and letting us have his bed.  That night the wind strengthened and a hooley of a storm blew up. Colin just happened to be lying under the loft trap and because part of the roof is open through to the extension, all he kept hearing was the trap door lifting and dropping as the wind got under it. I don't think he got much in the way of sleep as he feared for his life at one point when he felt sure the door was going to come crashing down on top of him. We all made it safely through the night and the journey to Eastbourne that morning went without a hitch. The funeral service was lovely and the chapel packed with all Norma's friends. After the wake we went back to the crematorium to choose the plaque and rose bush and decide where both Dad and Norma's ashes were to be scattered. That will occur at a later date. We set of back to Milton Keynes at around 4.30pm. That was a bad move because the M25 reputation as a giant car park came true. What should have taken us 2 1/2 hours took us nearly 4 and once back at Colin's, and as it was getting late, we made the decision that staying another night in a builders yard wouldn't be to bad after all. Out came Oscars mattress again but this time there was no wind to worry Colin and a good nights sleep was had by all.

I must just finish this blog by telling you of 2 things that came as a big surprise. In this day and age men and women work together in all manner of jobs that were once thought to be very masculine. Well this morning on leaving Colin's the builders turned up 1 of which was a women complete with hard hat and steel toecaps and then this after noon the lads at the dock reported a fault with their phone line and who should turn up from BT but a lady. She did no more then shimmy up the telegraph pole and fix the fault!!! 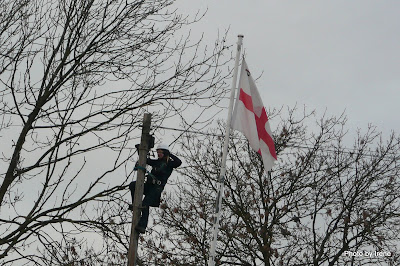 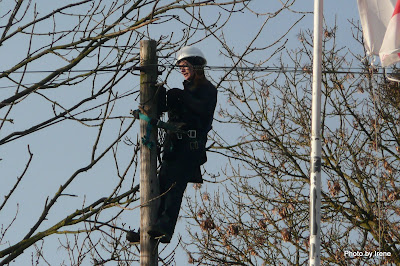