and the tankers arrive!!

8.15am..........  I was sitting in bed enjoying my cup of tea and trying to do a Code Word
when the peace and quite was shattered by banging and clattering from across the facility block. I sidled out of bed ( I'm on the gunwale side so I have to do my caterpillar impression to get to the bottom of the bed. ) and opened the curtains to have a good look. All I could see was pipes coming from a gap in the repaired fence...Hmmm, Is the septic tank to be emptied? 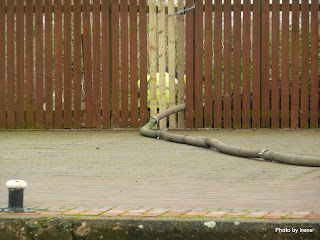 It sure was. I  had wondered how they were going to get the pipework in through the fence to empty the tank. ( see post )  Now I knew. I couldn't see the tanker anywhere until I poked my head out of the front cratch and saw not one, but two tankers parked in the car park by the empty offices. The septic tank must be huge to warrant sending two liquid waste disposal trucks. 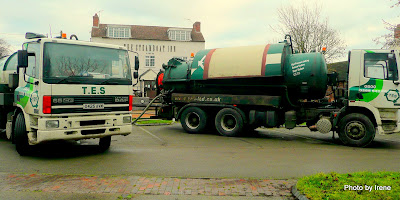 I watched as the men attached the pipes, stretching it along the towpath to the pub and over the lock gates. Good job no boats wanted to use the lock.

By now it was about 9.30am. We could hear the pump start in the tanker but nothing appeared to be happening. They stood about for a while then out came a big hammer. This was used to bang all the fittings on the joints presumably to make sure they were tight. Ian reckons the pipe was air locked with air leaking in through the fittings and that's why it didn't suck all  that lovely smelly sewage up through the pipe.

﻿ ﻿ It wasn't long after that, that the pong started. Thankfully the wind was blowing slightly away from us but even so the air was ripe. I really should have waited until they had finished to take Jade for her walk, but Jade kept harassing me trying to let me know that it was way past her 'walkies' time, so with scarf wrapped round my mouth and nose,we set off past the tanker and pipes.

﻿
﻿ I must have been gone a good 45 minutes but they were still there when I got back. Finally about 11.15 am they finished and started to bring the pipe back toward the tankers. One thing I did notice and thought very wrong was the washing out of the end pipe This had plainly come from being in the septic tank and they were rinsing it from the boaters water tap!! I didn't quite catch it on camera but if I had been nearer to that bloke I would have said something. You can clearly see that the tap is in view and part of the pipe is wet. To think we have filled our water tanks up from the same tap in the past and would have been completely unaware that sewage may have been present on the fittings! 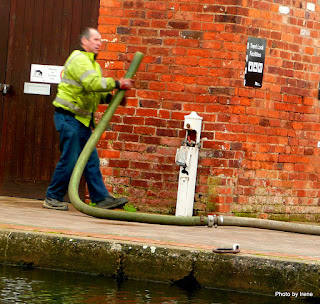 So finally at 12 00pm they left the site and peace was restored at last.
Posted by Ian and Irene Jameison at 5:14 pm

Time to ring the elf and safety office me thinks.

I think it maybe worth talking to BW about the company using the water tap to wash their pipe. I would hate to think of any boater coming down with stomach bugs etc.