﻿ As today was such an awful day and nothing could be done outside on the boat or at the bungalow, we decided to make our way to Wigston to visit our very good friends Pat and Keith. Simba came to join their family after the previous owners could no longer have her. I got the phone call in 2003 asking that, as the breeder, could Simba be returned to me. Although I was very reluctant to have yet another Labrador joining Judy and Jade, I agreed. Pat and Keith came to my rescue. As they had lost there lovely old Labrador Libby months previously, Simba came at the right time to help them over their lose.

Looking at this picture you wouldn't believe that they are sisters

﻿
Jade was one of Judy's first litter born August 2000, whereas Simba was born 2 years later in February 2002. Both Judy and her mate Bracken were black Labradors and you would naturally assume all the pups to be black. Well, Judy's mum was a yellow Lab  who in turn was mated with a black Lab hence the mixed colours in the litters. Are you confused yet??? because I as sure am and I'm writing this!!! Anyway I was very surprised when Judy had 7 black puppies and one yellow in the first litter and 5 black and 4 yellow in the second litter. 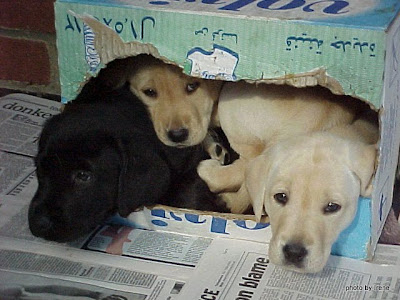 ﻿
﻿I stayed in touch with all the new owners while I had the boarding kennels, looking after most of Judy's pup's when the owners went away, It was a sad day when I sold the kennels in 2004 knowing that I probably wouldn't see them any more.
Posted by Ian and Irene Jameison at 6:04 pm